In a street where Korean restaurants abound, NAE:UM stands out with its modern interpretation of the Northeast Asian cuisine. Opened only in mid-2021, it has become quite popular that it’s difficult to book a table if your intention is to dine a week or even a month later – the waiting time is now about 2 months! Despite two heightened alerts and dining restrictions, the interest in the modern Korean restaurant continues unabated.

From its debut menu, the restaurant has now moved to its second episode featuring autumn and winter ingredients. Chef Louis Han, who hails from Seoul, helms the kitchen here. He was previously at Kimme. NAE:UM is his own venture.

The second episode in NAE:UM’s menu takes on the theme of a mountain lodge. Autumn is a wonderful time to go hiking in Korea, especially with the bright red and yellow foliage that comes with the season. Chef Louis aims to evoke those days spent in his grandmother’s house near Cheonggyesan.

The menu at NAE:UM is rather straightforward. The 6-course menu in this second episode is priced at S$168++. Certain dishes can be added at a supplement and alcoholic/non-alcoholic pairings are available as well. 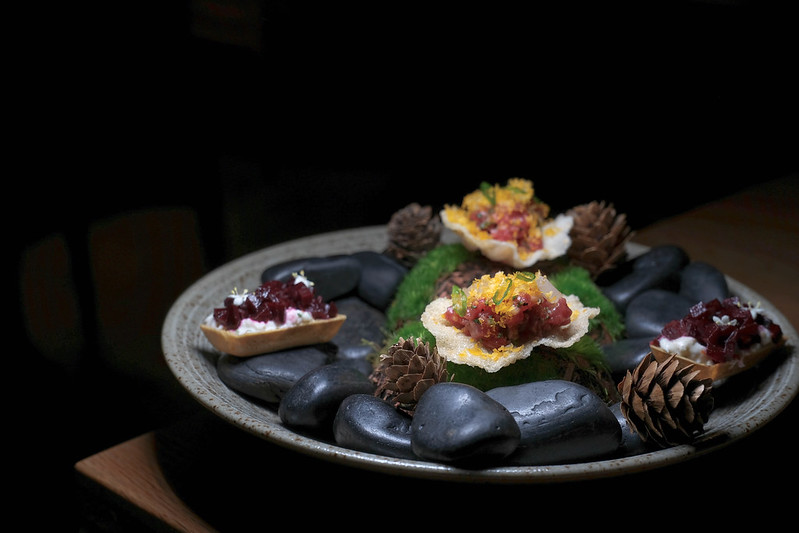 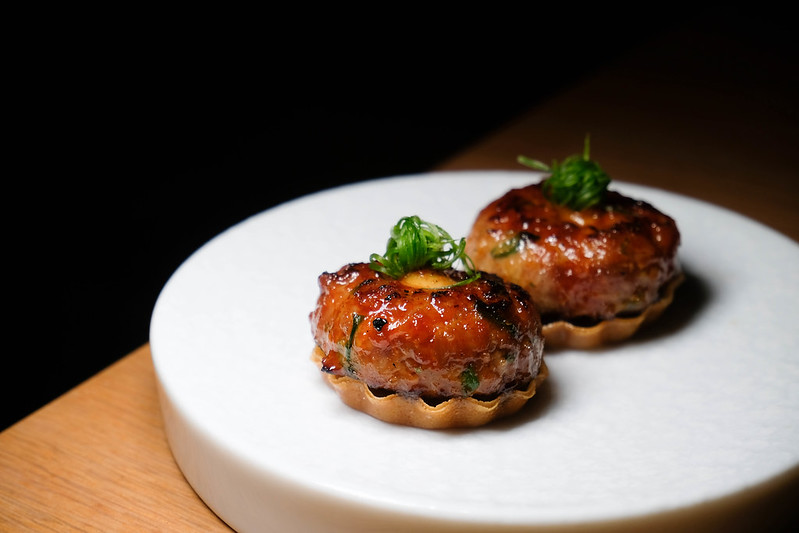 We started the meal with a trio of snacks. The Nurungji was a relatively small rice cracker with a smattering of beef tartare on top. Light and crispy, the beef tartare was a reliable starter. The Kkotge or flower crab meat with kimchi powder on a filo pastry melds Korean ingredients with a western style of preparation. Among the three, my favorite has got to be the Duckgalbi. A play on words (dakgalbi is a Korean dish made with stir fried chicken), the duck here is minced, grilled and turned into a meatball. It was also marinated with a secret gojuchang sauce. The flavorful duck aside, what made this dish in my opinion was the mochi rice cake in the center which totally threw me off.

Even before tasting the main dishes, I thought the snacks were already standouts. 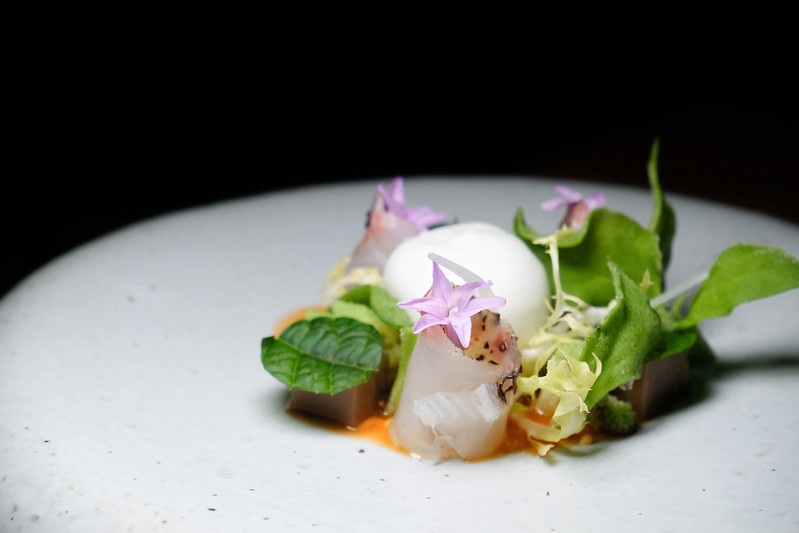 Next, we had the Domi or the fish course. Here, Chef Louis uses sea bream that has been aged for 3 to 5 days before undergoing a preparation technique that involves briefly dousing hot water over the skin to enhance its texture. The sashimi dish was rather refreshing and can be thought of as a mini salad as well, especially with the crunchy ice plant drizzled with citrus soy dressing. 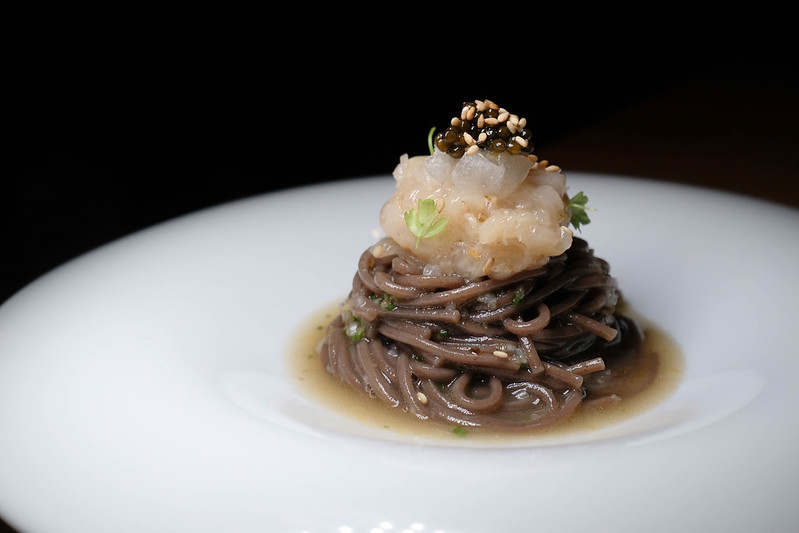 Diners can also choose to order additional dishes on top of the sets. One of these is the Somyeon which strictly speaking, is a wheat flour type of noodle. Here, they use buckwheat noodles which renders an appearance that is not dissimilar from Naengmyon or Pyongyang-style buckwheat noodles except that there’s less soup at NAE:UM. Overall, I enjoyed the springy texture of the noodles, more so that it came topped with white kimchi and caviar – the latter is a luxury that one certainly doesn’t find in the North Korean version. If you are dining at NAE:UM, you might wonder whether you should order this supplement. While the dish is good and there’s a bit of a novelty factor as Korean buckwheat noodles aren’t that common in Singapore; I’d have to say that the actual carbohydrate dish that comes with the set is already sufficient with the overall meal quite filling as it is. 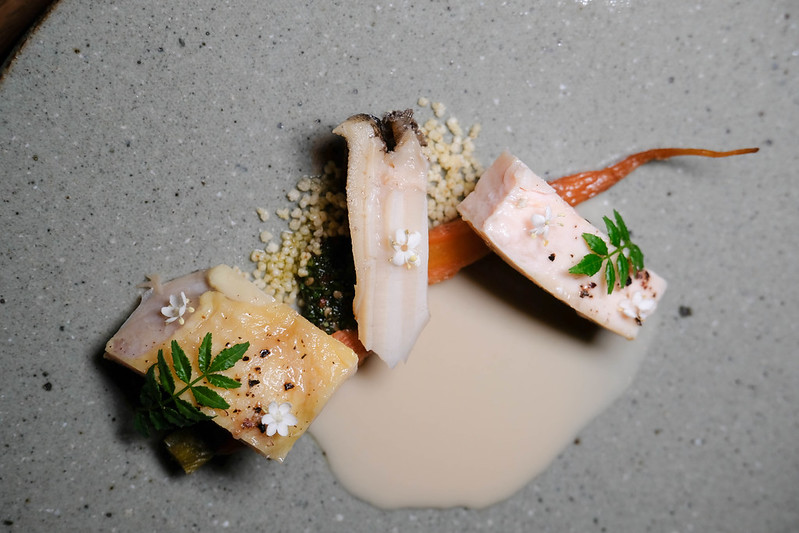 Chicken and abalone are perhaps two quintessential staples in Korea. I remember seeing whole abalone casually being included in dinner buffets during my last visit to Busan but I digress. The Naengchae comprises of slow-cooked French chicken and Jeju abalone braised in chili dashi and served with fermented bean paste. This is a relatively clean dish with light flavors. The predominant flavor of the slow-cooked chicken alternating between a piece of abalone stems mostly from the soybean sauce. 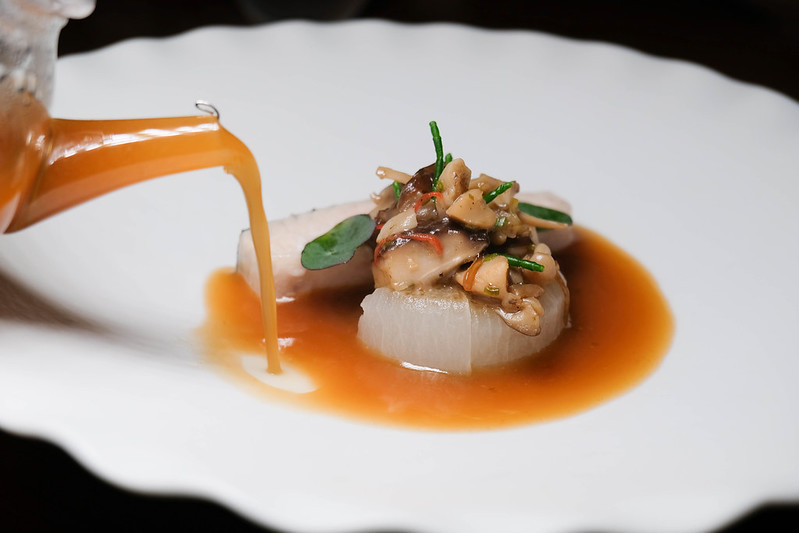 By this time, it becomes apparent that Chef Louis doesn’t rely on over-the-top showmanship or overly complicated techniques to present his dishes which is a relief as it’s not the case with many fine-dining outlets these days. Simpler, cleaner techniques can impress just as well and such is the case with the Samchi or Spanish mackerel. The fish here was brined and smoked before being subsequently rubbed with brown butter. The result was an extremely supple and even bouncy chunk of flesh that I never felt with mackerel before. The texture gave it a comforting quality that went well with the winter mushroom broth. 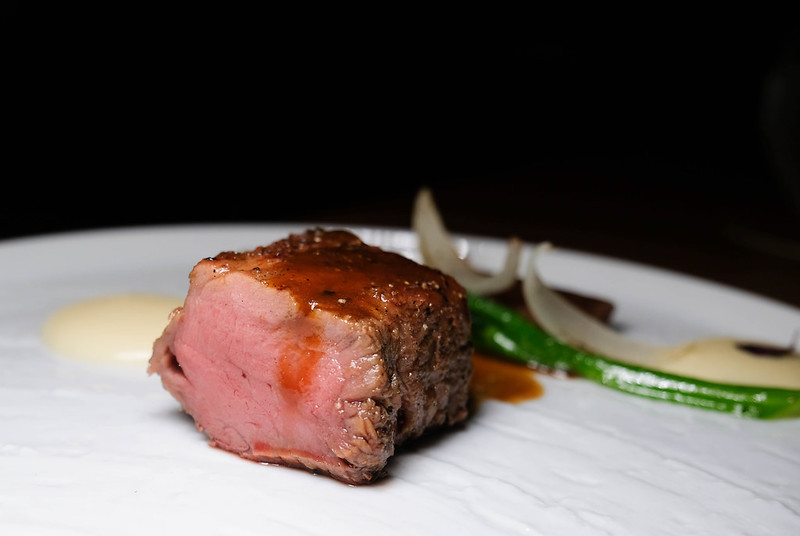 From lighter flavors, we then moved on to heavier mains. The Iberico Tenderloin was perhaps the most cuisine-neutral dish in the set and also the most familiar, especially to meat lovers. The tenderloin here came in a sizeable chunk with the Korean flair evident in the galbi sauce used to marinate the meat. 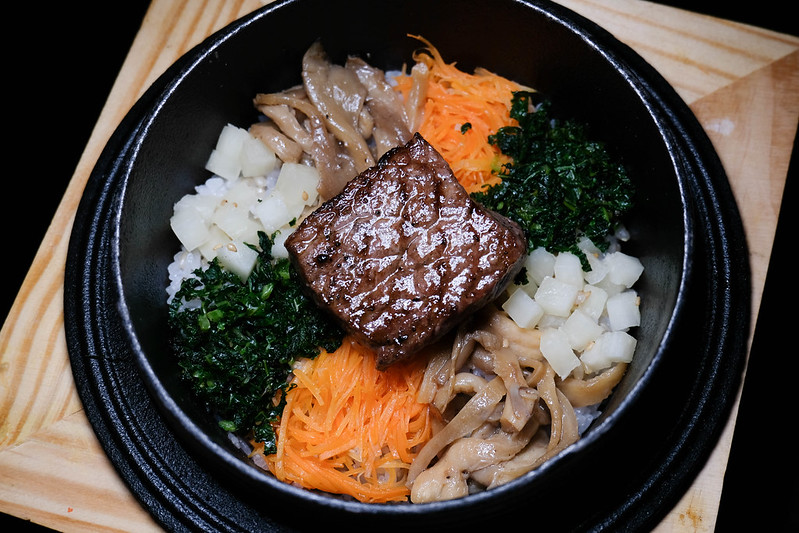 For the carbohydrate dish, we were served what looked like one of Korea’s quintessential dish – a large cast-iron pot of well divided vegetables sitting on a bed of rice as well as a fine slab of meat on top of everything – Chef Louis names this as Sanchae Sotbap. The sotbap was made extra luxurious here with a Nuruk-aged wagyu striploin taking center stage. We were also served 3 types of condiments including a rather spicy XO makjang sauce, pickled vegetables as well as white kimchi. Along with the small portion I had earlier in the Somyeon, the white kimchi was a first for me. 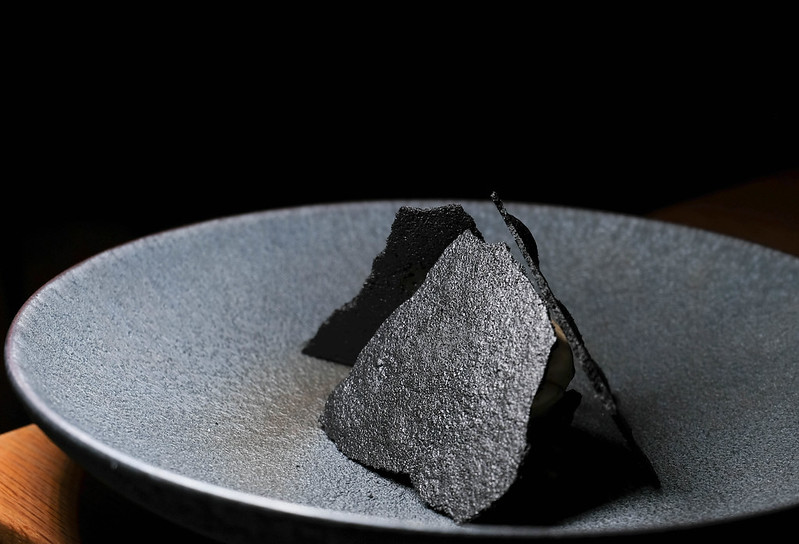 An establishment like NAE:UM won’t be thought of as a dessert place but the sweets here are particularly noteworthy. I was already full by this time but my tummy seemed to open a new compartment after having a bite or two of what came next. The Charcoal Jujube (at a S$12 supplement) may appear all black and mysterious on the outside but was such a delight that I couldn’t help but eat it with my bare hands. There is no set way to eat it and even my server told us to devour it in any way we like. I would personally recommend using the charcoal tuille as a base and to load up the jujube ice cream and puffed multi grains on it. Heavenly! 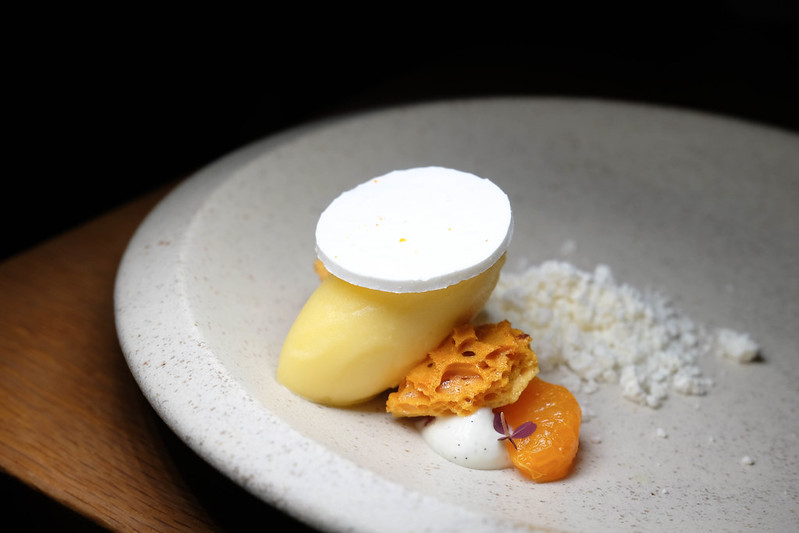 For something fruity, the Mandarin was another highlight with its zesty namesake sorbet and “dalgona” honeycomb. This is the standard dessert that came with the set. 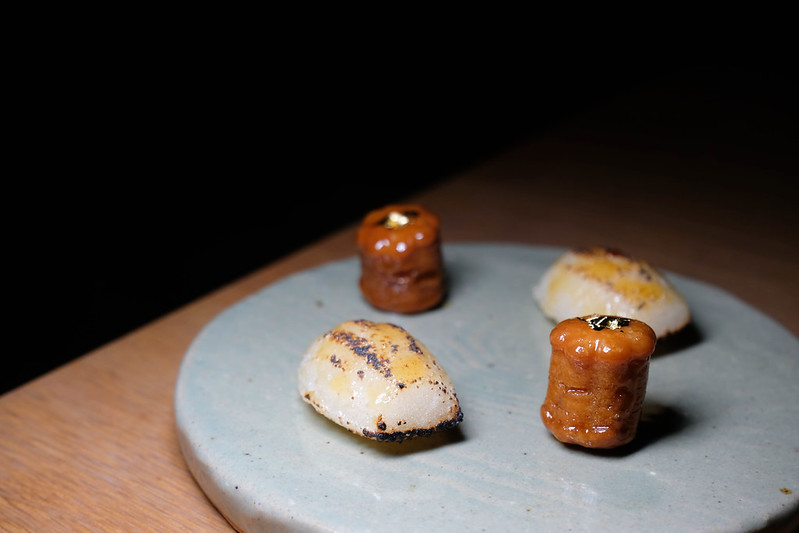 Just as we started with some beguiling snacks, we ended with some pleasantly surprising Petit Fours. They looked deceptive – and appeared like caneles and madeleines on the outside. Take a bite however and one would soon notice the Korean elements. The madeleines were actually fermented rice cakes while the caneles were crunchy Yakgwa cookies.

NAE:UM certainly lives up to the hype and I consider it one of my more memorable restaurant meals of 2021. My dinner left such a good impression on me that I began checking out dates for their Episode 1 (a menu which they still serve for lunch) but it seems like they are booked out for lunch as well.