Nestled in the northern part of the island of Borneo, the oil-rich state of Brunei is one of the smallest countries in Asia and also one of the least visited. If you fancy history and amazing architecture (particularly Islamic) with a bit of the tropical vibe thrown in, then Brunei is for you. As a developed country and owing to its small size, it is relatively easy to get around and you can conveniently see the sights of Brunei within a few days. Personally, I found three nights to be enough to see Brunei. Here is my suggested itinerary for a trip to the country:

END_OF_DOCUMENT_TOKEN_TO_BE_REPLACED

Last August, I boarded a flight from Singapore to Manila with a 7-hour stopover in Brunei. I could have easily booked a direct Singapore to Manila flight but as I’ve never been to Brunei before, I decided this was a more practical option. I figured that since I would be unlikely to book a separate trip to Brunei in the future, this was a good method of going there. The ticket price for this trip was higher by only SG$100.

A few days before the trip, the yearly haze started blazing in the jungles of Sumatra and Borneo. Brunei was one of the worst affected. We had the haze here in Singapore as well, but in Bandar Seri Begawan the visibility was as low as 2.5 kilometers during some parts of the day. I reckoned this was unfavorable for picture-taking, and hoped that the skies would be clear during my visit.

The Royal Brunei Airlines Singapore to BSB service was the first time I’ve been on a flight that was actually blessed. Just before the plane went in flight, I could hear this loud voice chanting hypnotically in Arabic. Later, I learned that this was standard practice for all flights by Royal Brunei. Service was fine, and the planes were reasonably clean. We landed into a hazy Bandar Seri Begawan in no time.

I must say that what I saw did not exactly fit my expectations of an oil-rich country such as Brunei. The airport looked a bit tired instead of regal. It reminded me of some provincial airport in other Southeast Asian countries. Nevertheless, immigration and customs went by quickly and I was out of the airport in ten minutes.

I don’t know why but I expected Brunei to be something like Singapore – squeaky clean, extremely efficient and boring. Well, I was right about one but wrong on the other two. As I made my way to the airport exit, I had no clue what transport choices I had to get to the city. The tourist information desk was closed for noon prayers, and the only seemingly available option to get to the city was a ten minute $25 taxi ride! Since I didn’t want to waste my time, I grudgingly agreed. The driver even tried to scare me by telling me that taxi was the only choice back to the airport and he wanted me to prepay $25 just for him to pick me up later for my flight back. Undaunted by his fishy warning, I just said no (rightfully so!). 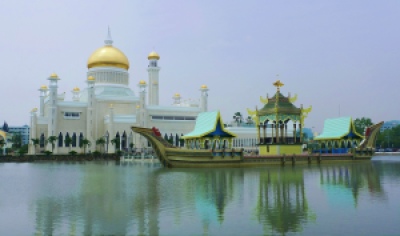 My first stop was the Omar ali Saifuddien mosque near the city center. I arrived right in the middle of noon prayers, amid the sweltering heat of the noontime sun. I made a quick roundabout, and tried to capture shots from as many different angles as possible despite the haze. By the time I encircled the mosque, I was already dripping in sweat. It must have been about 35 celsius at the time. The mosque was a majestic sight, and it was probably the most impressive thing I saw during my short visit to Brunei.

Afterwards, I went to cool off in the Yayasan complex nearby. Had a quick snack at Jollibee and killed some time before I went to the Royal Regalia Museum, which only opened at 2:30PM. It was a mere 6 minute walk from the city center. The museum was another interesting place and it had free admission. The display included the actual crown used for the sultan’s coronation, as well as a replica of the royal throne and other fine gold-colored objects. There was also a seemingly endless display of gifts which the sultan had received from dignitaries around the world. I saw 2 gifts from my country – one was a sword given by the late President Corazon Aquino while the other was a box made from shells presented by the current president. 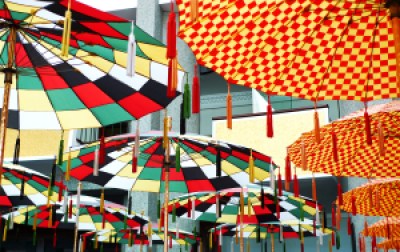 As I exited the museum, I chanced upon a passing bus which was going to Gadong – just the place I was going to! I asked them to stop at the Hassanil Bolkiah mosque. The ride was only about a few minutes. They dropped me off right at the front gate. As I was admiring the place, it started to rain.  Because of the haze, t was wet and with unbearable humidity at the same time!  The parking lot was filled with cars and it seemed like I chanced upon another prayer session again. I took a few snapshots before boarding another bus to Gadong. I stopped at The Mall, which according to Lonely Planet was the largest in Brunei. From the lobby, the mall looked opulent with a big chandelier, some plush furnishings and formally dressed staff in the reception. But once inside, it seemed like any ordinary mall. What was notable about the place was the number of vacant spaces inside. Lots of store space remained unoccupied or were vacated by the previous tenants, perhaps as a reflection of the state of the economy not just in Brunei but in the region as well. I looked around for a while but there wasn’t really anything interesting. I grabbed a quick bite – the food in Brunei in general is marginally cheaper than in Singapore – then I boarded a bus back to BSB. 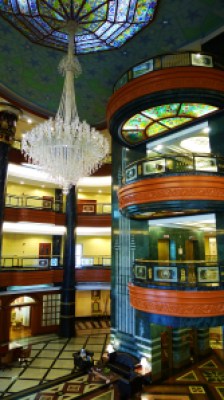 After alighting in BSB, I went for a stroll by the waterfront. I could see people boarding the water taxis then speeding towards Kampong Ayer in the distance. I also walked around the CBD for a while. The place generally had a bit of an old and tired feel – I don’t know if it’s because of the haze but everything seemed so grey and dull. A general observation I had about Brunei is that it is so sparsely populated. Even in the heart of downtown BSB, I could barely see any pedestrians.

Just before 6, I boarded the bus to the airport. The taxi driver tried to scare me earlier by saying that buses stop running at 5 (the last bus actually departs at 7). There were actually still a lot of buses when I left. I later found out that the bus does not really make a deliberate stop in the airport, and I had to tell the conductor beforehand where I was going. And so, they made a detour for me and dropped me off at a grassy field just a few meters from the airport entrance, ending my 7 hour trip to Brunei.