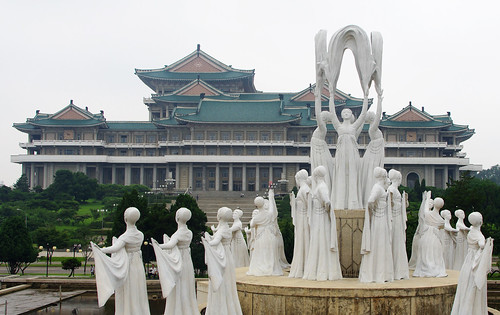 With this being said, what better way to get a feel of the country than through its showcase capital, Pyongyang. Driving through the city, one gets an overview at what life might be like for those living north of the 38th parallel. It is quite certain that everything in the tourist route had already been “edited” by the government but still, one can catch a few notables. For one, the people we saw outside were all slim. There wasn’t even a single person who looked slightly chubby. We were told that meat is considered a luxury in the country, and eaten by most Koreans only twice a year during certain holidays. Another thing we noticed is how people would walk long distances, over highways and even bridges and also how it gets very dark at night as if there were no electricity, despite Pyongyang having over 2 million inhabitants. 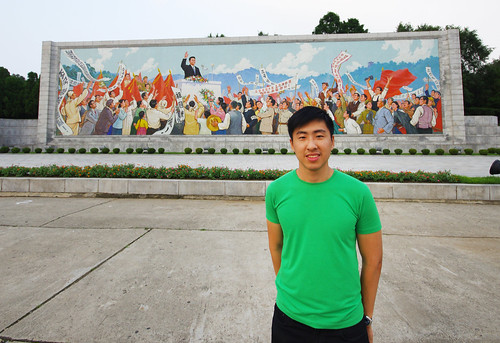 If you do go on a trip to North Korea, you’ll most likely have your itinerary already planned out for you. Unlike most people’s perception, there is actually a lot of things to see in Pyongyang. Most itineraries are already jampacked with things to see and do. Our guide was rushing us the whole time, making us start the day at 8AM and sometimes only returning to the hotel at 10 in the evening! Sometimes, one can get a bit of leeway on the places to be visited, especially on smaller tours or on private ones (the 2 guides are still compulsory) so if ever you do find yourself needing to prioritize, here are the un-missables in Pyongyang: 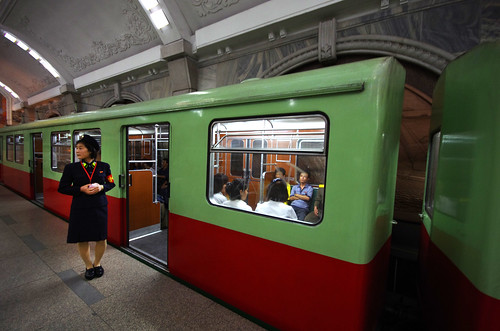 The entire country is shrouded in so much mystery that even things that would be considered mundane elsewhere are otherwise deemed as peculiarities here. An example is the Pyongyang Metro which was the first place our guide brought us. Extending more than a hundred meters below ground level, the stations double as bomb shelters. Many are elaborately built with murals, fancy lighting and even statues, in keeping with the now mostly defunct Soviet style of design. We were brought to ride the train through a few stations. In the past, there was a rumor that the government hired actors to act as passengers whenever tourists take the train. This was later debunked. Our own experience also proved this rumor to be false. We were there during rush hour, with what must have been hundreds of other passengers waiting and then boarding the standing-only train. Still, our very first “tour” experience in the DPRK proved to be very surreal. The locals were very nonchalant about our presence. I am not sure whether this was because of shyness or if it was because they are heavily discouraged from speaking to outsiders. Nevertheless, it was one of my most interesting rides on a metro!
#8: Arch of Triumph 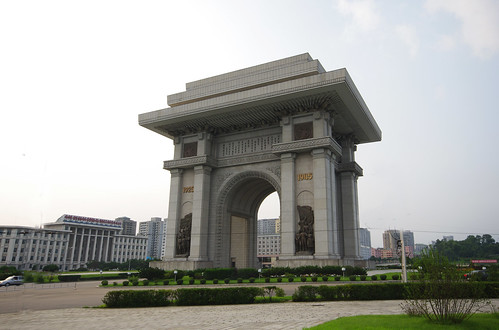 We then alighted at Kaeson station, with none other than Pyongyang’s very own Arch of Triumph greeting us as we exited the station. Our guide made very sure we knew that it was X meters higher than the one in Paris and is the highest Arch of Triumph in the world (apparently there are quite a few scattered all over the world). Ok, so I told our guide that I was impressed. 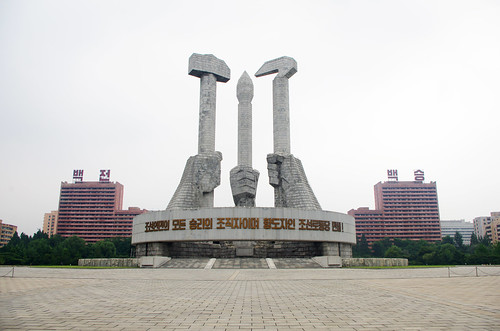 Utterly simple design yet undeniably socialist, Pyongyang’s version of the hammer and sickle comes with an extra paintbrush! Built to commemorate the 50th anniversary of the Worker’s Party of Korea (I wonder if there are any other political parties?), it is also flanked by two buildings in either side of the monument with communist slogans written in Korean.

The North Koreans have by now become such experts in building monuments that this has become one of their exports to the world. North Korean monument makers have been shipped to places like Angola to build these things in concrete or marble. 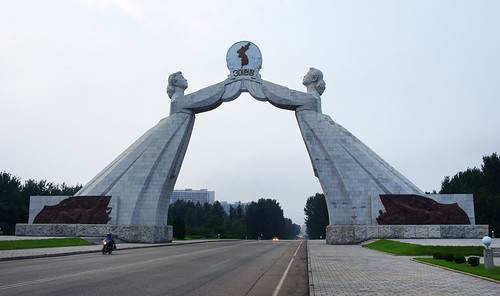 Located just by the entrance to the city from the Reunification Highway, this white monument expresses the desire of both North and South Korea to reunite. During the trip, our guide revealed to us some proposals on reunification. Apparently, it involves a federal form of government where Korea will become one entity but will have 2 political systems – a socialist one in the north and a democratic one in the south. It sounds a bit similar to China’s “one country two systems policy” to me but their version of the plan doesn’t sound very feasible. But I wonder if I’ll ever get to see Korean unification in my lifetime. I hope I could. 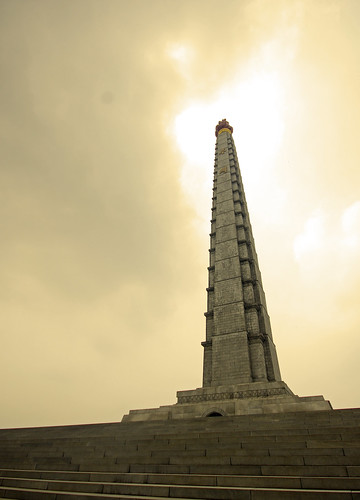 Dedicated to an idea so important that a monument is built for it, the term “juche” refers to Kim Il Sung’s idea of self-reliance. Visitors are allowed to climb the tower for a fee of Eur 5. On a clear day, the views over Pyongyang are spectacular and some of the city’s landmarks such as the Ryugyong Hotel are in full view. We were there on a very gray morning and hence didn’t go up. 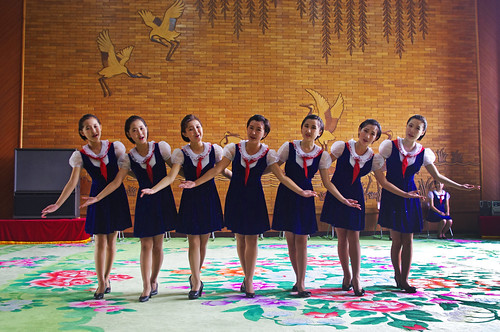 “let us entertain you with songs about kim jong il and how our country is the best!”

A showcase of North Korean children’s talents, this was one place where I was truly impressed. The palace itself is a curiosity – apparently all cities in the DPRK have one and it’s used for extracurricular activities by kids. So the deal is, children come here after school and engage in all sorts of artistic stuff, from voice acting to calligraphy. I was most entertained by the singing group (pictured above) who performed a nice rendition of yet another socialist song about studying well or the joys of living in the DPRK complete with hand movements and bobbing heads.

#3: Kumsusan Palace of the Sun 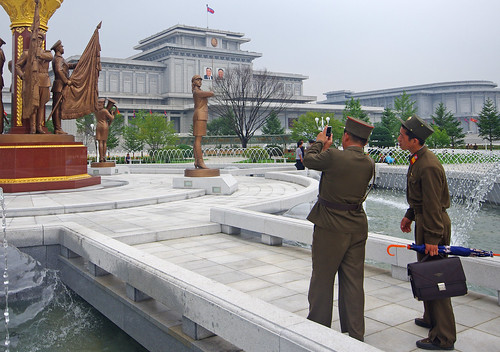 The embalmed bodies of Kim Il Sung and Kim Jong Il are inside for viewing. ‘Nuff said.

Oh, and it comes with eerie red lights and equally eerie background music as well. 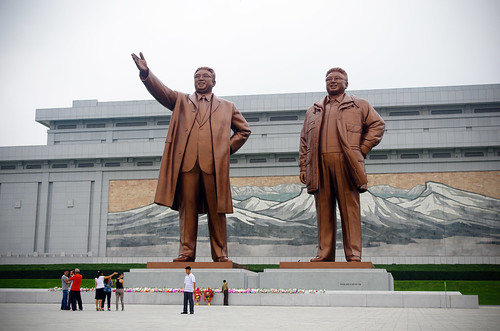 kim jong il: welcome to north korea – the best country in the world!

Perhaps the most iconic of Pyongyang’s sites, it used to contain a larger than life statue of Kim Il Sung. After Kim Jong Il’s death, a larger than life statue of him was built and placed alongside his father. This is considered one of the most “sacred” places in Pyongyang where locals would come prior to getting married to pay their respects to the Great Leader and Dear Leader (cult of personality, anyone?). We were required to wear proper clothes in order to visit the place.
#1: The Arirang Mass Games 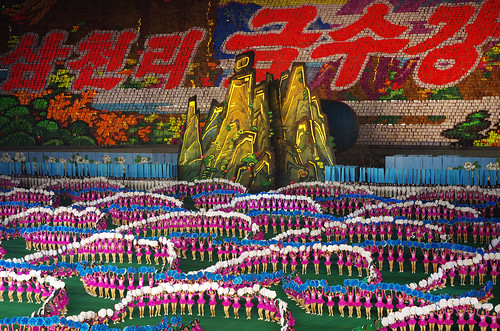 This alone would merit a visit to North Korea. The Arirang Mass Games truly is the greatest show on earth – and I say this without any irony or sarcasm! It is 1.5 ours of pure energy, synchronicity and stunts. Only a truly communist country like North Korea can impose a show of such size (the performers outnumber the spectators). It has to be seen to be believed!

I came to North Korea not to tick off a checklist of sights but to experience what it’s like in a country being run like no other. In the end, my curiosity was satiated and I must admit that some of these sights left me in episodes of momentary disbelief. Journeying to North Korea really brings the point home on how traveling can open people’s minds. And yeah, one needs to be pretty open-minded when coming here.

How to get there: Pyongyang has limited connections to the outside world, the most commonly used being with Beijing via train or plane. Nevertheless, it is imperative to book the tour with an authorized travel agent. Free and easy travel is not permitted and being with 2 guides during the entire trip is mandatory while in the DPRK.

Where I stayed: You don’t really have much choice. The bulk of tourists that visit the city end up staying in the Yanggakdo Hotel, conveniently located in an island in the middle of the city to prevent people from wandering out on their own. This is said to be the best hotel in Pyongyang. 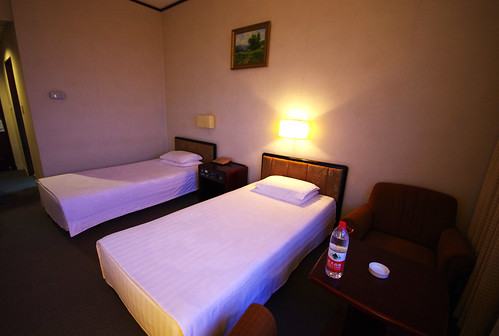 our room in yanggakdo hotel

This being said, the hotel is quite comfortable, albeit a bit tired. Most foreigners get assigned to rooms in the highest floors.