Amidst the current climate, a number of new concepts are still making their debut in Singapore. Avenue 87 is one of the new establishments to open in the Telok Ayer – Amoy Street stretch. The restaurant sits in a 2-storey shophouse, taking over the former space of Kimme. This is a part of the CBD that straddles the office crowd and the upscale foodies – with this stretch alone having at least 4 Michelin-starred restaurants. 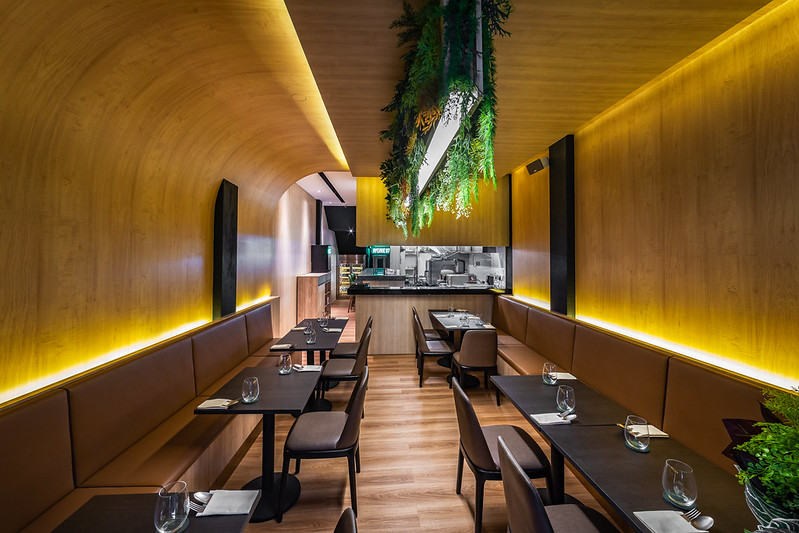 And so comes 2 friends who happen to be from Hougang in Singapore’s northeast. The two Singaporean chefs, Glen Tay and Alex Phan, were both born in 1987 and had lived in Hougang’s Avenue 8 and Avenue 7 respectively. These similarity in numbers as well as the nod to local cuisine brought about the name Avenue 87.

Both chefs have had extensive experience in the culinary scene. Chef Glen currently works in Ultraviolet, a 3-star Michelin restaurant in Shanghai. Chef Alex, on the other hand, is not new to me. I previously met him at Park Hotel Clark Quay, where he was the Executive Chef and calling the shots at the inhouse restaurant, Porta. When the offer to start the new restaurant was made, the duo spent the lockdowns formulating recipes through video calls, as Chef Glen is based in Shanghai and Chef Alex is in Singapore. Each of the two would buy the same ingredients and recreate their own versions of the recipes and discuss the outcome. Sometimes, certain ingredients would not be available in one of the locations, necessitating a replacement. Sometimes, this also led to unexpected results which ultimately made it to the final menu.

The cuisine at Avenue 87 is best described as a nod to familiar tastes but with a contemporary twist. What often occurs when someone tries to bring a modern element to things is that the result becomes too haute and withdrawn from the original meaning. In Avenue 87, they try to preserve a sense of nostalgia to each dish, bringing about an element of comfort. The restaurant has a 4-course dinner menu (S$76++) and 6-course dinner menu (S$98++) that runs through most of the specialties of the house. For business lunches, Avenue 87 also offers set meals during mid-day from S$29++.

I was recently invited to Avenue 87 to check out the new restaurant for dinner. During this particular occasion, I tried the 6-course dinner. 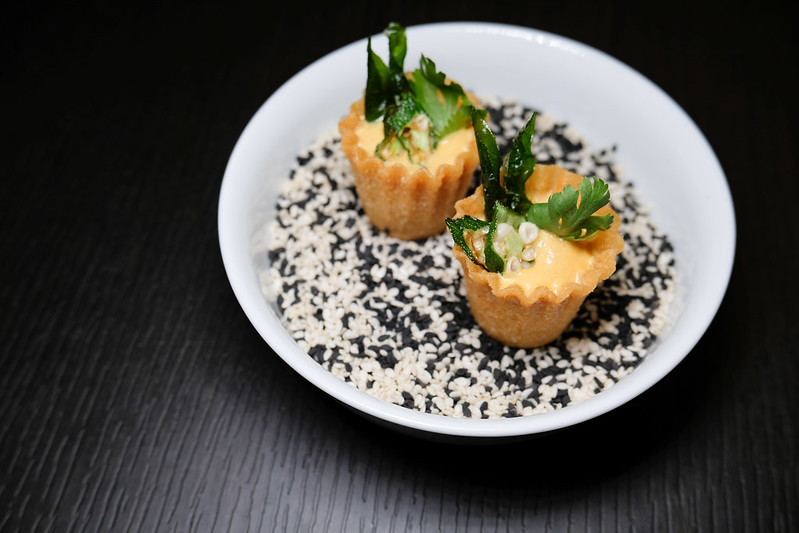 The 6-course dinner also includes snacks before the meal proper. As with the rest of the meal, the snacks are also a nod to local cuisine. Some of the dishes are even directly inspired from their old neighborhood in Hougang. The Kueh Pie Tee in particular, was one of the highlights even though it was just a snack. Biting into one of these felt like biting directly into a mini serving of fish head curry. Both chefs used to spend their downtime after work in a zi char stall in Hougang Street 21, with their go-to dish being the Fish Head Curry. There is no actual fish in the kueh pie tee snack, but the assam pedas sauce that filled the cup easily makes you forget that. This is best eaten in one gulp. 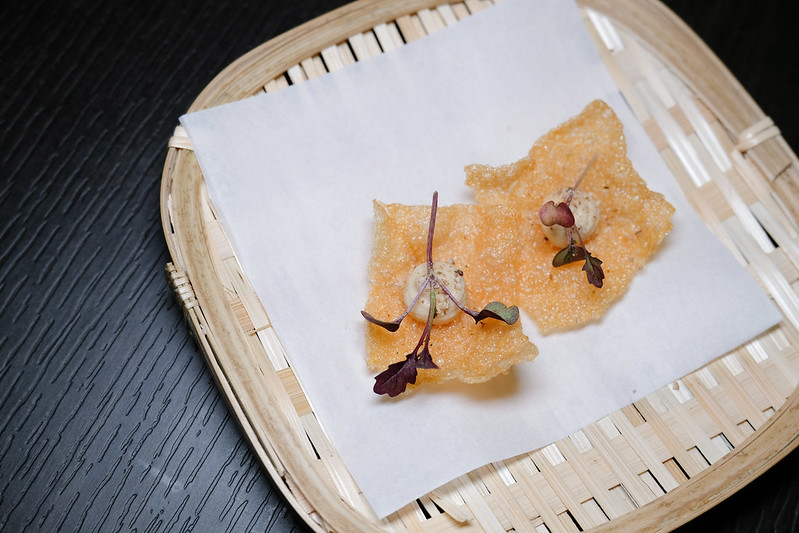 Another snack is the Chicken Chips. This is a play on the usual keropok snacks but instead of using skin, chicken breast is utilized instead. 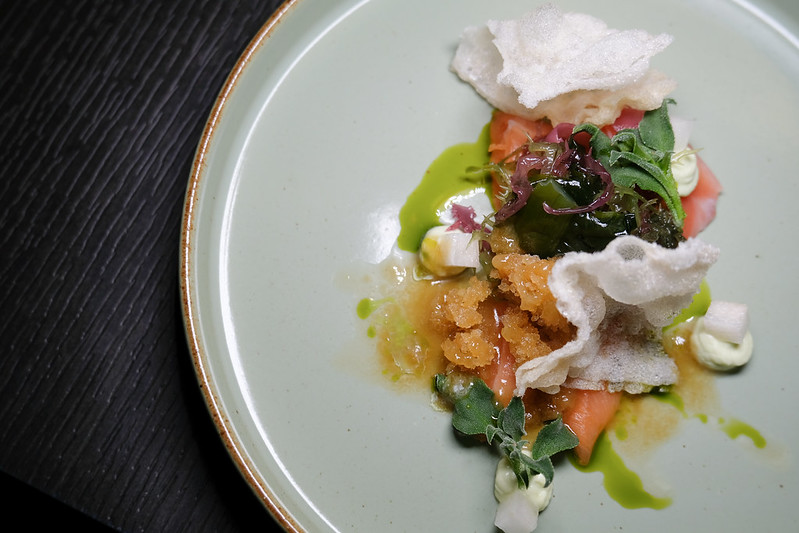 The first course for dinner is the Salmon. Of the dishes I had for dinner, this is probably the one that’s least relatable to Southeast Asian cuisine. With the Japanese elements however, I am not complaining. Salmon sashimi is used here with diced crystal pear and a combination of sour cream / ponzu. Vietnamese rice papers crackers are then added on top for that crunch. This is a nice and refreshing dish to have as a starter. It’s light on the palate and it serves as an unlikely teaser on what’s to come. 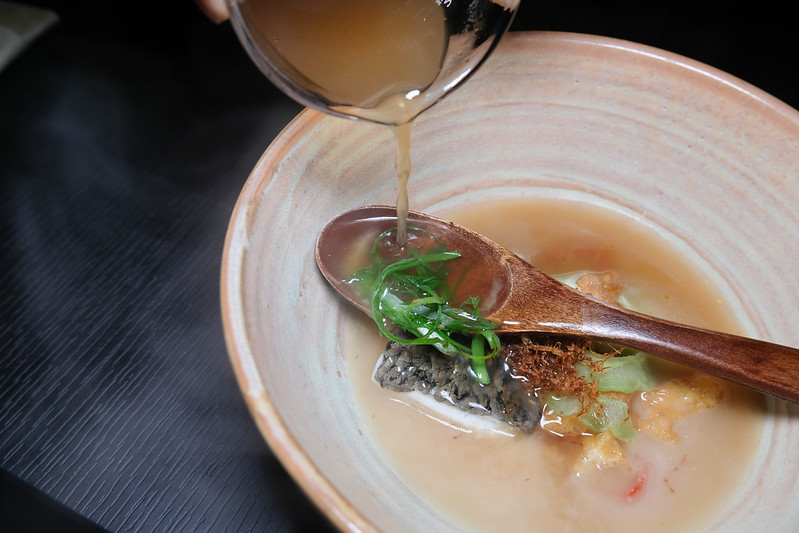 The next course took us back to Singapore. Chef Glen wanted a soup dish and Chef Alex proposed using locally sourced fish from Ah Hua Kelong, a supplier he worked with when he was at Park Hotel Clarke Quay. The result is the AHK Seabass fish soup as the second course. This was a most comforting dish, and the recipe behind the soup was actually discovered by accident. During one of the brainstorming sessions, Chef Glen could not find dried sole fish in Shanghai so he used dried anchovies instead. This resulted in the soup having a deep umami profile so the anchovies were kept in the final recipe. In the current version, anchovies are deep fried in low temperature to extract the flavors. To complete the soup, cherry tomatoes are added for an element of sweetness and bittergourd for contrast. 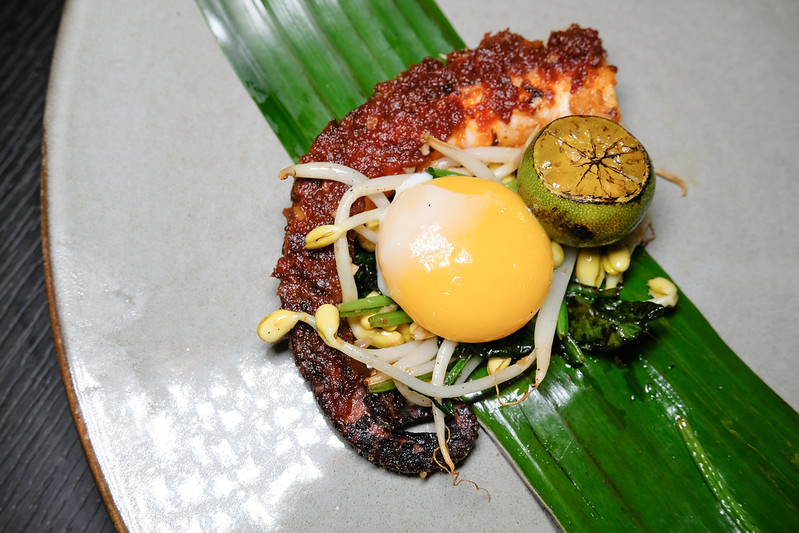 The third course, the simply-named Octopus, was my favorite that evening. Think – sambal stingray but employing superbly tender octopus meat instead coupled with a sweeter rendition of sambal. This was heavenly and I gulped all the remaining sambal despite already consuming the entire octopus tentacle. There’s also an egg yolk on top to round up the spiciness of the sambal but I thought it was already good enough without it. 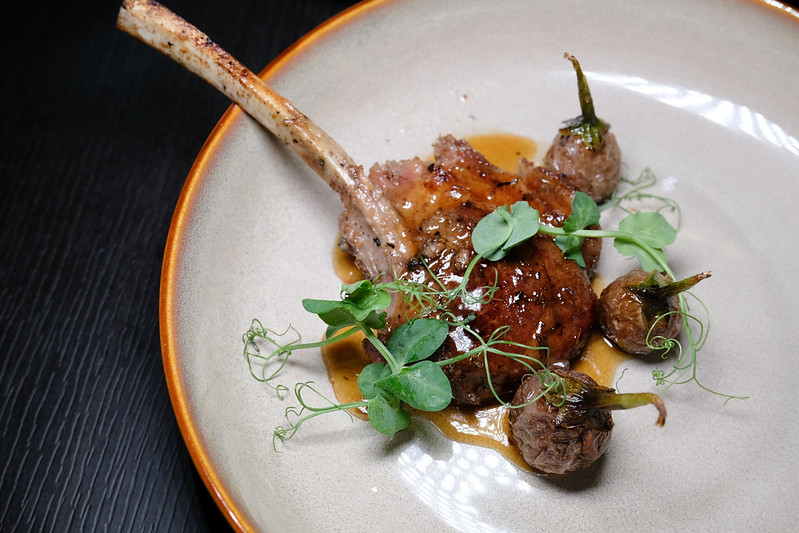 Lamb is probably not the first thing that folks would consider when it comes to Asian – or even modern Asian cuisine for that matter but the Baby Lamb Rack that came next has its Vietnamese inspiration to thank for its succulent aroma. This dish partly takes inspiration from Vietnamese meat skewers in particular. Here, New Zealand lamb is marinated with a Vietnamese-style blend of herbs and spices including lemongrass, shallot, garlic, galangal, and Chinese parsley. We were initially asked for our choice of doneness, with medium rare being the chef’s recommendation. What really makes this dish, in my opinion, is the sweet tangy sauce made from locally-sourced stingless bee honey. It was really addictive. With this being the main, diners also get to choose their sides. During the evening I dined, choices included Garlic Potato Mash and Egg Fried Rice. 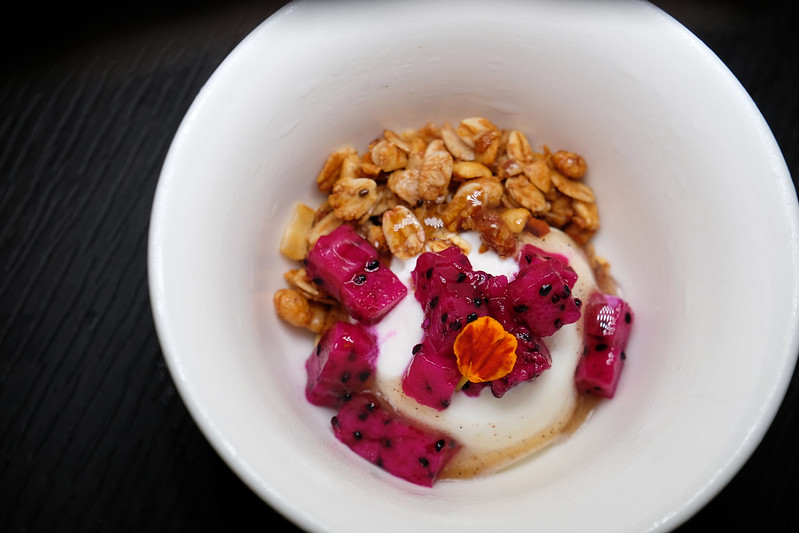 As a precursor to desserts, we had the Greek yoghurt mousse with house-made granola, cubed red dragon fruit and 8-spice honey 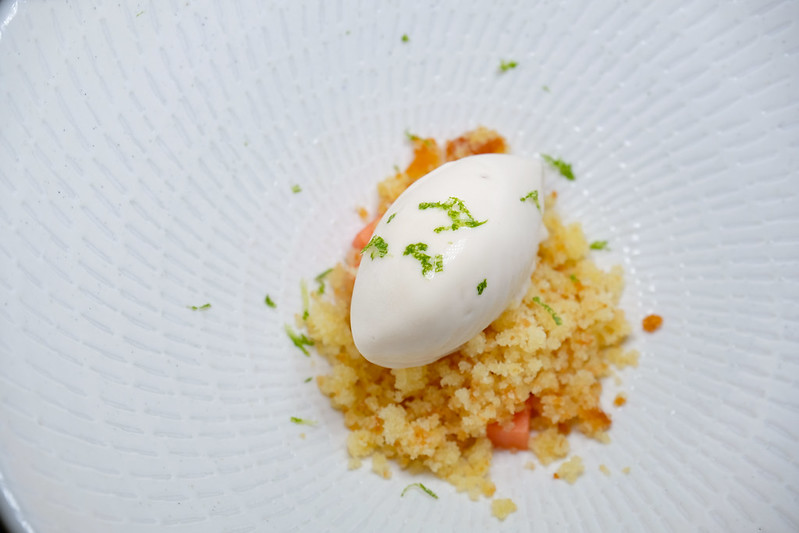 For the 6-course menu, we had not one but two desserts. The first was a most refreshing Coconut ice cream served with pound cake crumbles, papaya bits and pineapples. The ice cream is made inhouse, with Chef Alex possessing a flair for concocting sweet treats. 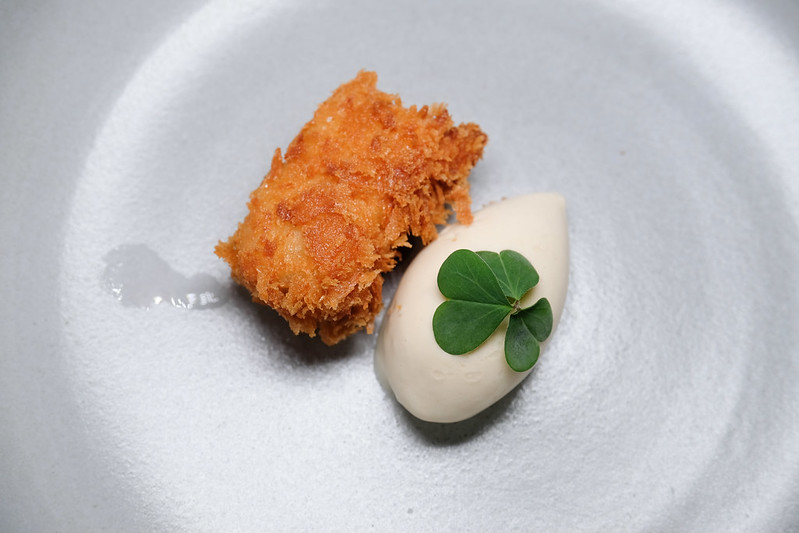 While I loved the coconut ice cream, I thought the next dessert – the Pisang no Goreng – was more notable. Chef Alex literally separated the pisang (banana) from the goreng (fried). The fried portion here is a perfect piece of warm coconut custard which is meant to be eaten together with the accompanying banana ice cream. This was a great play, not just on textures and temperatures but there is also the addition of a new element – coconut – to this familiar snack. And that folks, is how you creatively deconstruct the goreng from the pisang.

A creative spin on local and Asian flavors that is worth trying, Avenue 87 is a reflection of the two chefs’ freedom in going beyond the oftentimes strict boundaries of a region’s cuisine. You will find elements of the familiar here and there, but the final product is still something innovative enough to surprise. Prices are in line with what you would expect from this area, quality and attention to detail.