J65, the all-day dining restaurant at Hotel Jen Tanglin, has recently launched its “themed nights buffet.” Basically, the buffet theme changes on most days – an international buffet on Sundays and Mondays, Asian on Tuesdays, lobsters of Wednesdays, live barbecue on Thursdays and seafood on Fridays and Saturdays. I recently headed down to J65 to check out the new buffet offering. As it was a Tuesday, I was treated to the “Colours of Asia” spread that evening.

END_OF_DOCUMENT_TOKEN_TO_BE_REPLACED

The all day dining restaurant at Hotel Jen Tanglin, J65, has revamped their dinner buffet by launching J65’s Eat Through the Week. The revamp puts a new twist in the usual buffet lineup by offering something different each day of the week.

END_OF_DOCUMENT_TOKEN_TO_BE_REPLACED

J65, the all-day dining restaurant in Hotel Jen Tanglin is the latest hotel to roll out a Sunday champange brunch offering, which is increasingly becoming a national pastime in Singapore.

If you recall my stay at Hotel Jen Tanglin, the property at Cuscaden Road has recently undergone a $45 million renovation in order to reposition itself with an unmistakable youthful vibe, complete with room décor that doesn’t look out of place in boutique hotels and a club lounge that seems to have jumped out of a hipster café toolkit. Consequently, the same proposition permeates in just about every aspect of the hotel including the revamped food offerings. 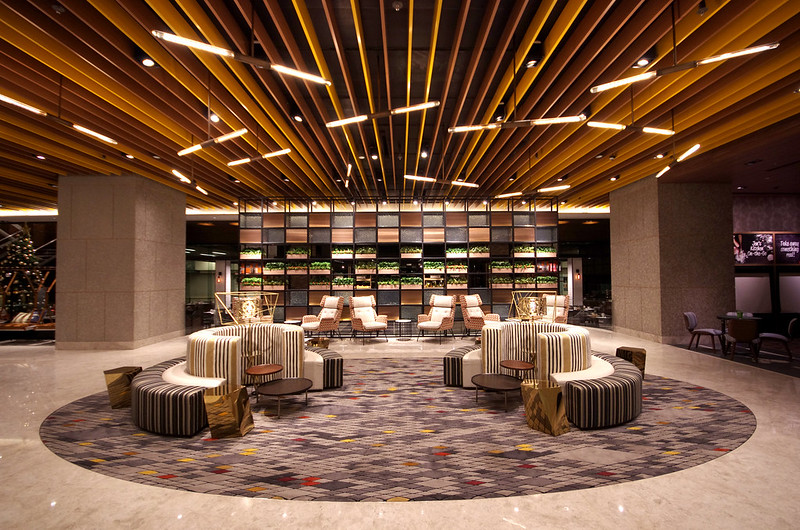 The property officially opened in December 2015 after the completion of its spanking new lobby and the in-house restaurant, J65. I did not have the chance to see both during my stay 3 months back as the area was still being renovated. I must say that I do like the outcome – unique and fun! 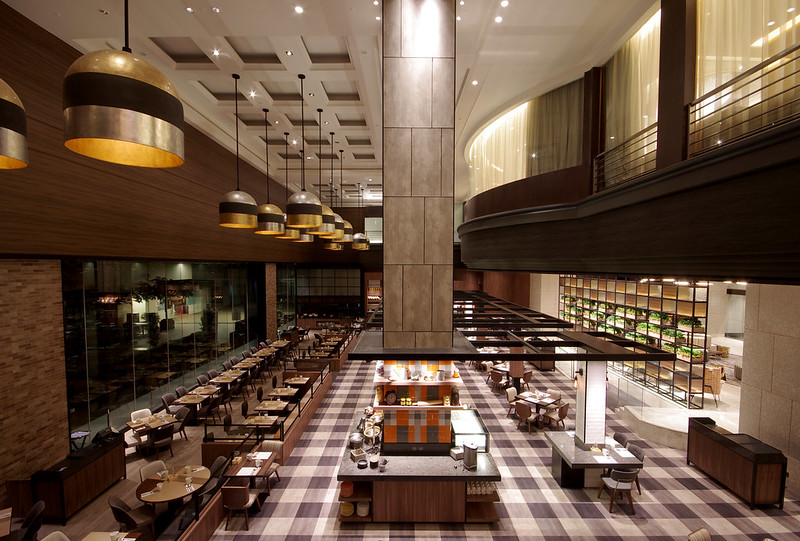 J65 is located just behind the lobby and a faux wall separates the two. The name is a mix between “J” which stands for the Hotel Jen brand and +65 which is Singapore’s country code. The restaurant offers buffets daily, alternating in theme with cheaper single serve buffet options for weekday lunch, seafood dinners during some nights and of course, the Sunday champagne brunch. As I entered, I spotted a DJ spinning some house grooves. It was the first sign that this was not going to be like any other brunch I’ve been to. 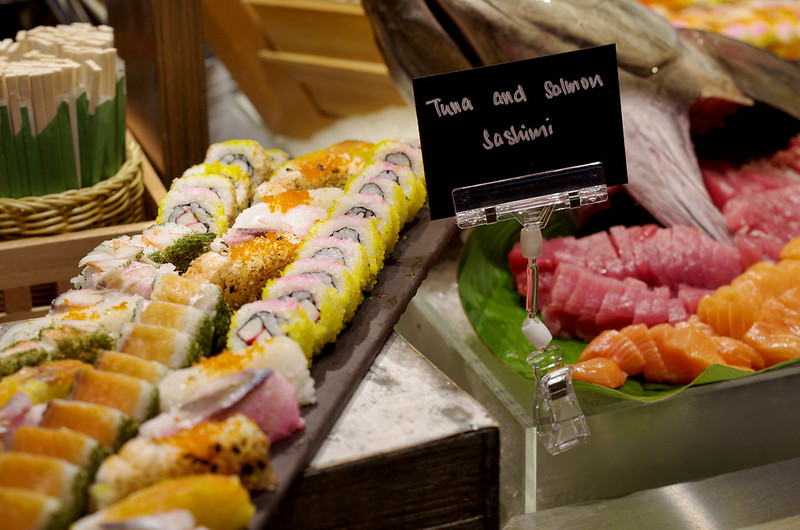 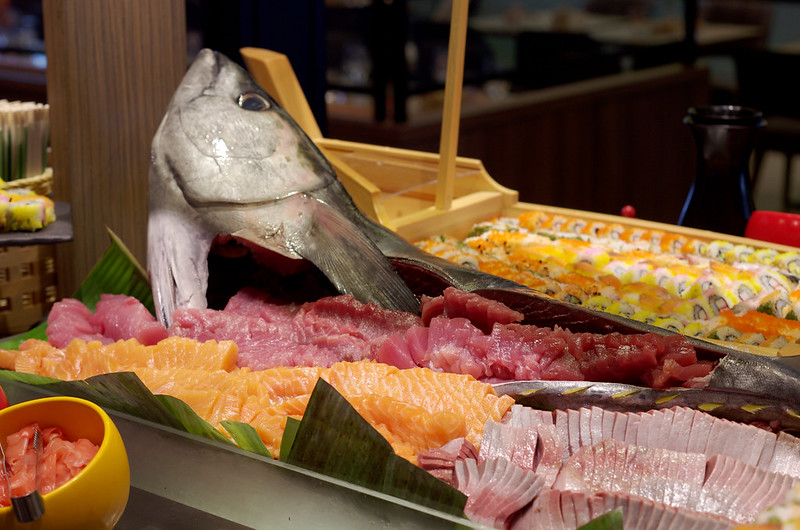 The brunch buffet extends over several counters. During my visit, I was glad to see that my favorite sections were there. The variety of Japanese food for instance, was quite impressive with several types of rolls and at least three types of sashimi. 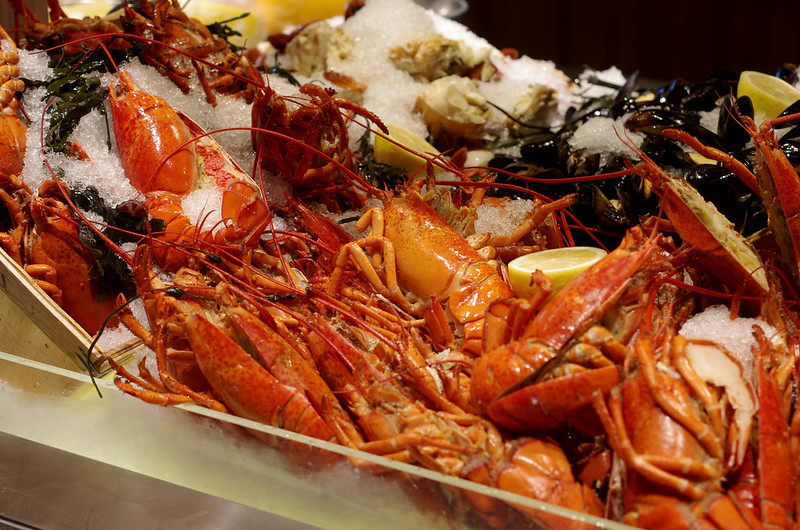 Seafood lovers will also have a ball here, with oysters, prawns, crabs and lobsters gracing the counter. I asked the staff to heat up some of the seafood items and top them off with cheese and he gladly obliged. 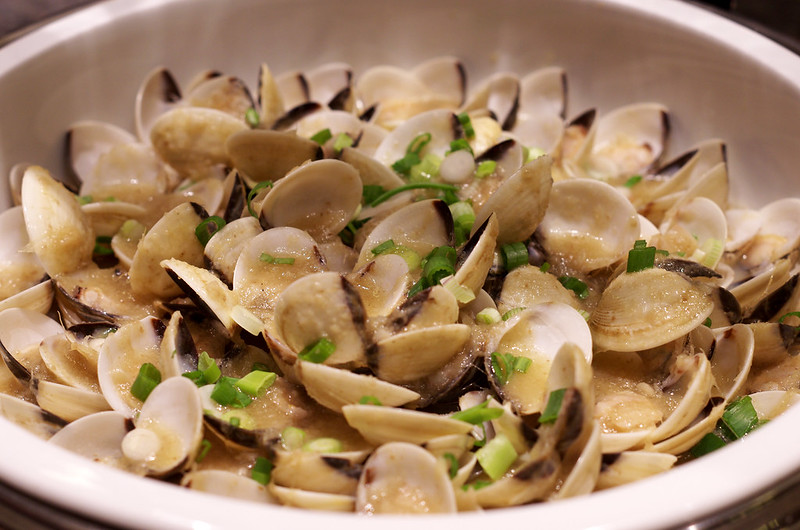 I normally skip the hot dishes whenever I’m in a buffet as I usually end up having too much sushi and seafood but I made an exception for the Chinese dishes here. I particularly liked the stir fried clams with ginger sauce that prominently featured in my taste buds. 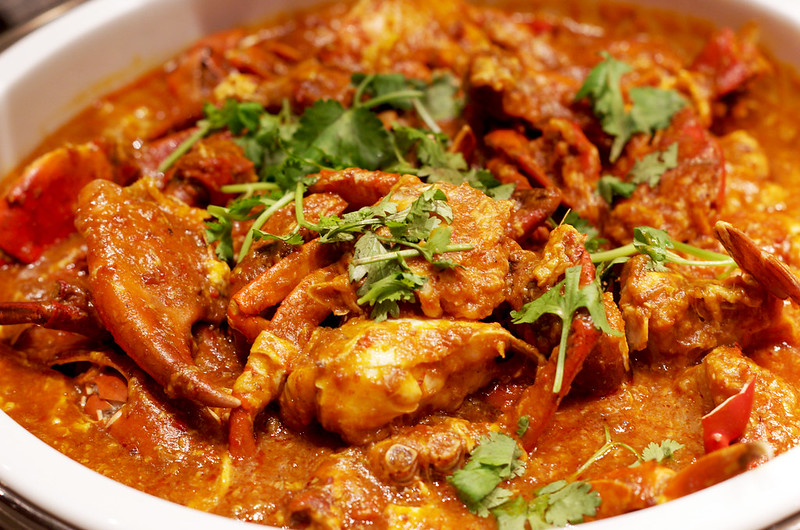 If you’re itching for local food, you can also spot the likes of Singaporean chili crab and even kueh pie tee which I still have fond memories of when I had some at the club lounge during my last stay at Hotel Jen Tanglin three months ago. 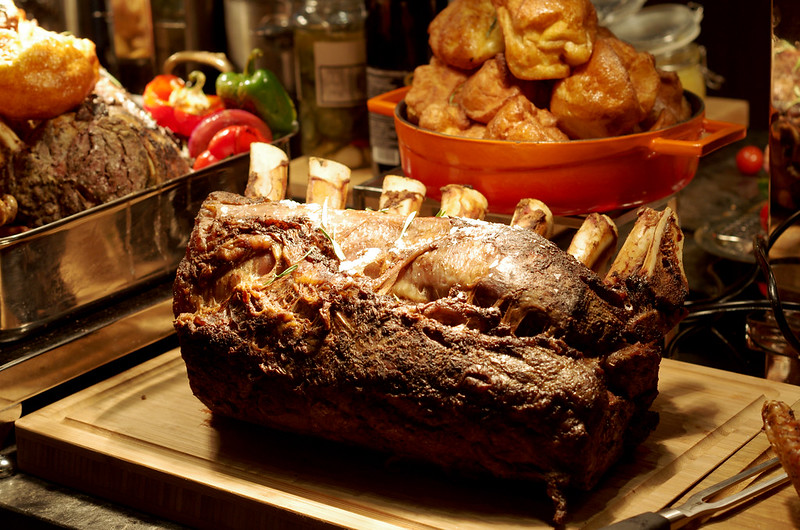 The buffet has a separate section for roasts and I was able to find large slabs of prime rib, roast turkey with cranberry sauce and Brussels sprouts on the side! If you’re too intimidated to cut something up from that huge rack of meat, fret not. You can ask any of the staff members nearby to serve you a slice or two. 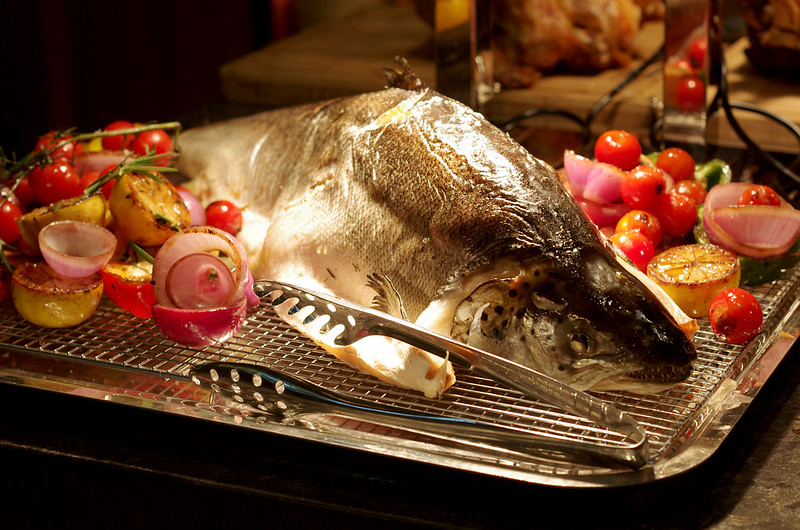 For a healthier option, there’s some baked salmon as well. This is also located within the carving station. 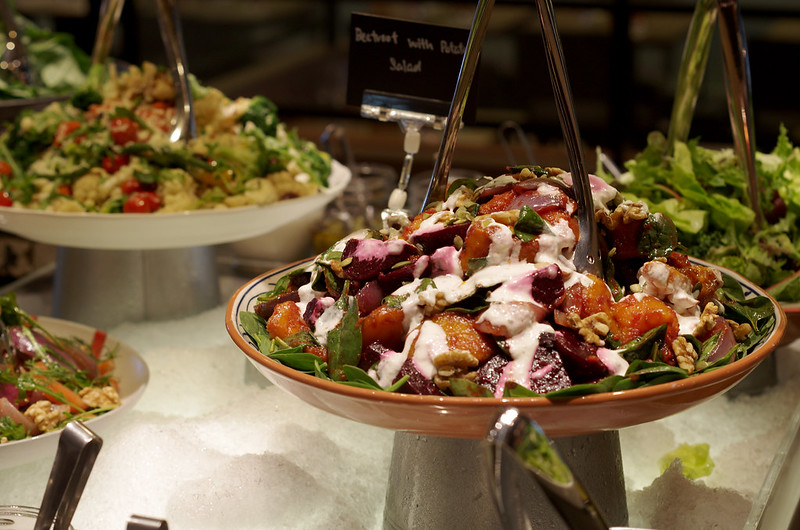 A feature of the Sunday brunch is the extensive cold cuts selection with various salads, cheeses and cured meats. Though not particularly a cheese person myself, I was amazed with the decadent selection of cheese available which included Edam, Gruyiere, Cheddar and Roquefort as well as some pretty exotic ones. 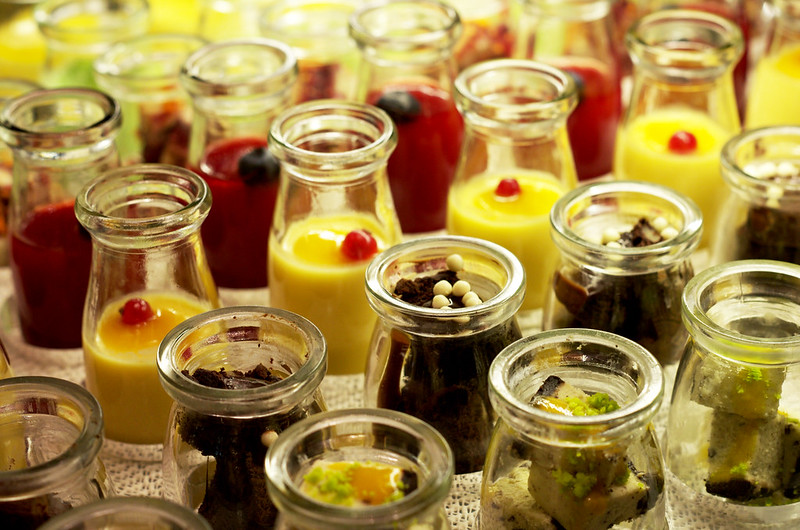 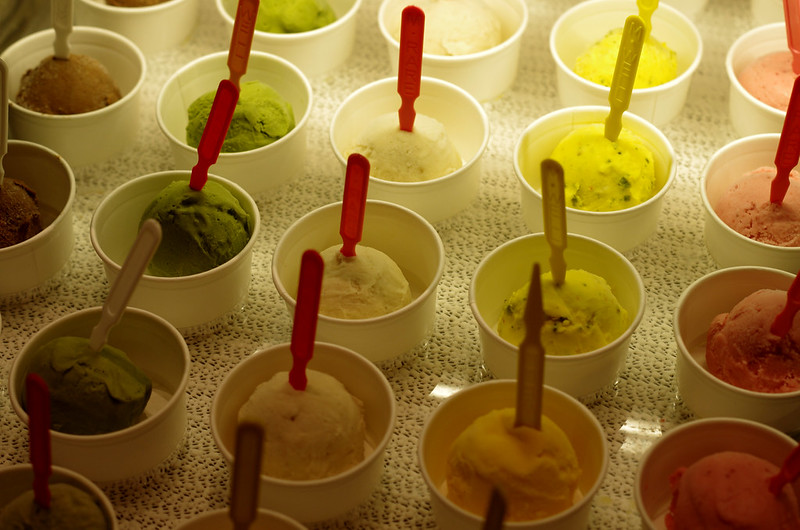 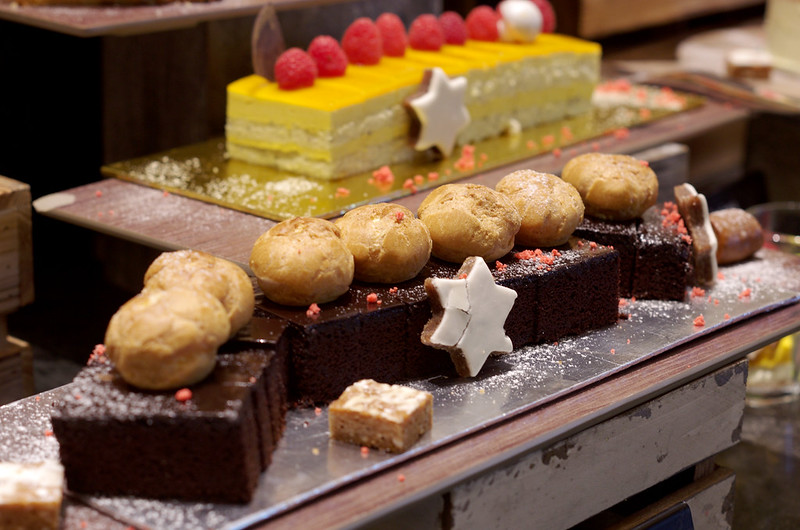 The dessert station was in Christmas mode as cakes and pastries were decorated with candy-coated snowmen. I found ice cream readily placed in cups with lots of toppings to choose from. If you’re feeling adventurous, you can try the durian ice cream! 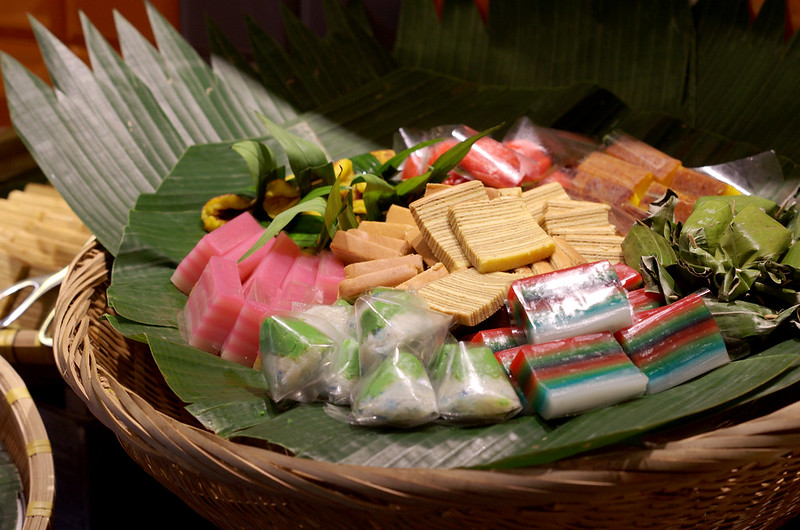 I have practically tried lunch or dinner buffets across all Shangri-la properties in Singapore and a mainstay is their selection of kueh or local desserts. This is the case as well at J65’s Sunday brunch and they’re all laid out in a basket for diners to choose. I particularly liked the kueh lapis. 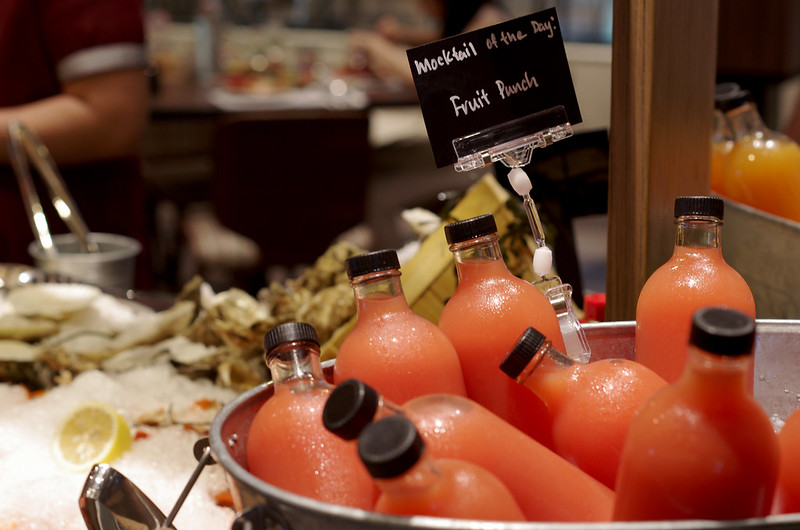 The Sunday brunch buffet also comes with free-flow of drinks. Some of these can be readily taken from the spread, such as the “mocktail of the day” which during the time of my visit was fruit punch. 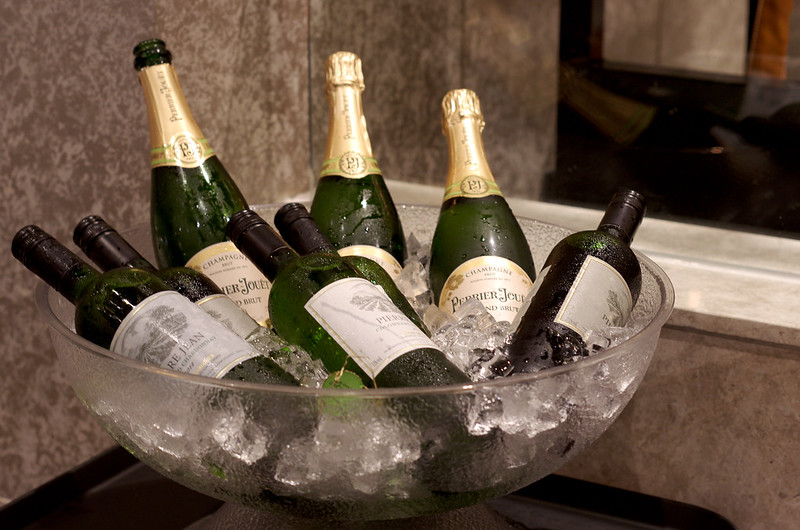 But it is a champagne brunch after all and J65 serves free-flowing Perrier-Jouët for diners to indulge in. 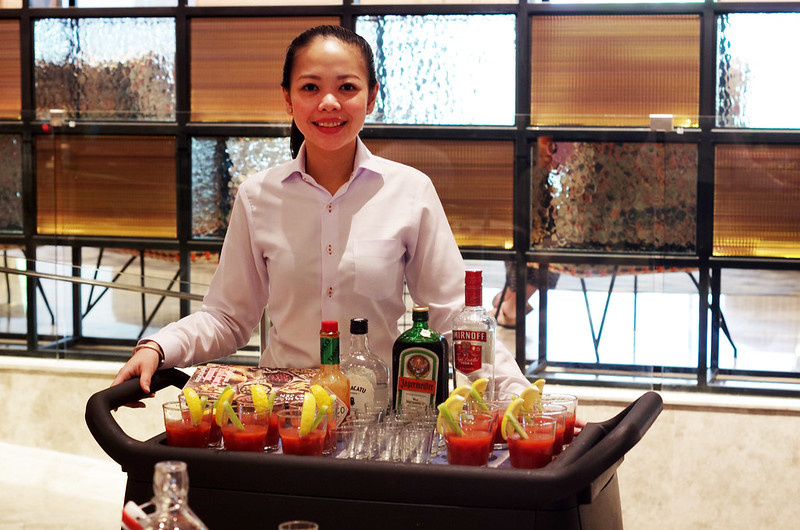 Midway into the brunch, the bloody mary cart stopped by my table and the staff member whipped up a cocktail for me to drink.

Food and drinks aside, I have to hand it over to the staff at J65 for providing impeccable service. Plates were cleared each time I returned from a round at the buffet, champagne (and water) get refilled while more popular items in the buffet get replenished regularly. The service is more in keeping with their sister hotel, the Shangri-la Singapore than a 4-star property.

Price – How to get 15% off on your next buffet at J65
The brunch is available every Sunday from 12noon till 3pm at SGD 118 net with free-flowing Champagne, wine, beer and cocktails and SGD 78 without alcohol. This is relatively good value compared to other Sunday champagne brunches which can go as much as SGD 195++ per person. What’s more, diners who book online get a 15% discount so the effective cost can go as low as SGD 100 with champagne and SGD 66 without. This effectively makes it the cheapest hotel champagne brunch in Singapore! You can book online here. 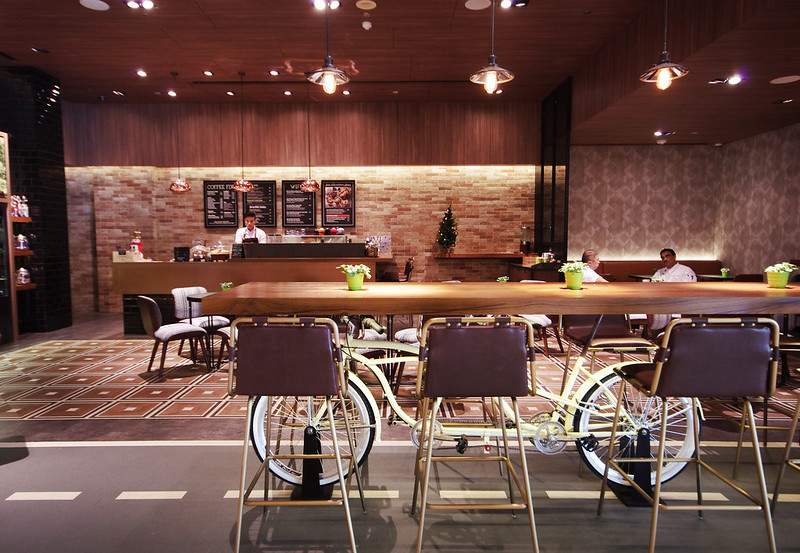 After my brunch, I had a try at the property’s new cafe, Jen’s Kitchen On-the-Go located just beside the lobby. With such a hipster kind of decor, how could one resist? In any case, the coffee here is as good as in any of those hipster cafes. I tried their matcha latte and nutella latte. My vote goes to the latter – a must try at this cafe! 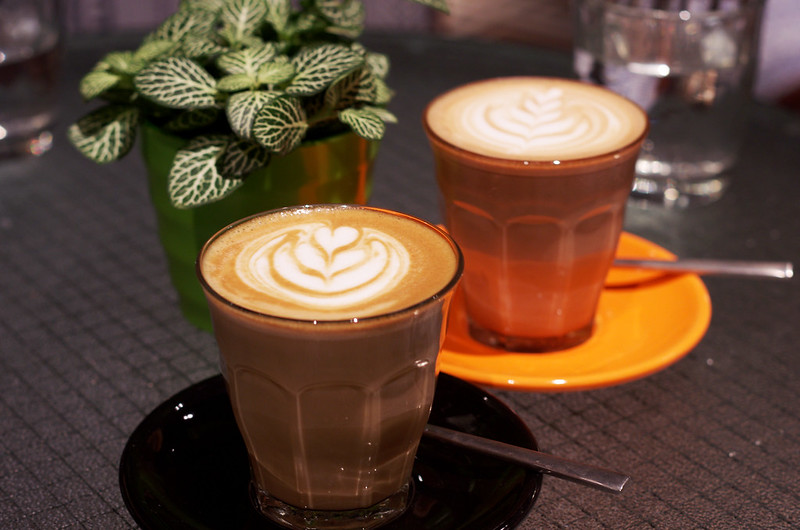 Despite being housed in a hotel, the prices are comparable to cafes elsewhere in Singapore, at around SGD 5 for a cup of latte.

Aside from coffee, the cafe also serves some craft beers, specialty juices as well as light snacks and sandwiches. I certainly would not mind lounging around all day in the cafe given the great ambiance!