This year marks eight years since Finnair launched the Singapore – Helsinki route (AY132) and the airline is launching a new summer menu for this occasion, one that is crafted in consultation with award-winning chef Tommy Myllymäki.

The new menu will be made available from 6th June to 5th September and showcases Nordic cuisine. Think: seafood, wholesome light bites, mushrooms and onions.

Chef Tommy Myllymäki, has been a Finnair Signature Chef since 2017. Myllymäki has been nominated chef of the year in Sweden, is the creative director for five Stockholm restaurants and has represented Sweden with great success in the prestigious Bocuse d’Or competition. He lives in Sweden but both of his parents are Finnish.

I recently attended the preview of this new menu, with fond memories of my time exploring the Nordic countries a couple of years ago. I remember thoroughly enjoying the fresh fish back then and this new menu reflects the emphasis on seafood. 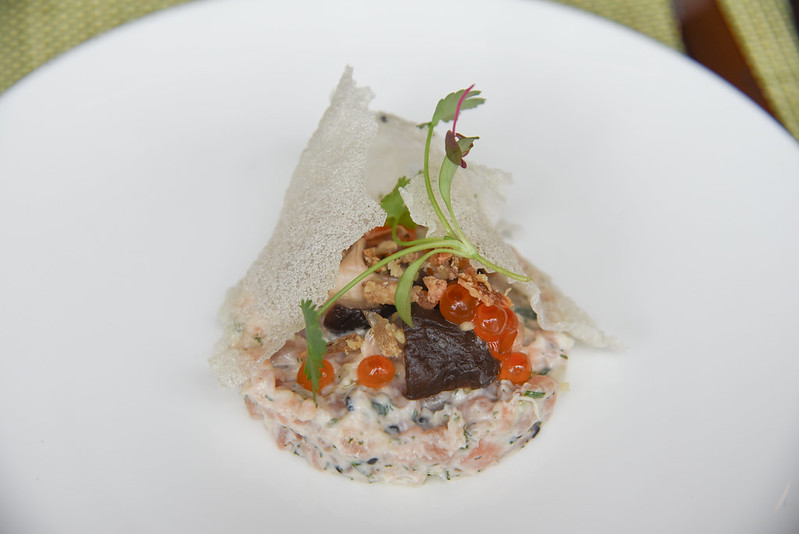 The dish created by Chef Tommy will be served on the Finnair flights as a starter course. Specifically, that’s the salmon tartar, served with marinated mushrooms, fresh trout roe and sprinkled with fried onion. During the preview, we got an added treat with some fried rice paper served alongside the tartar. 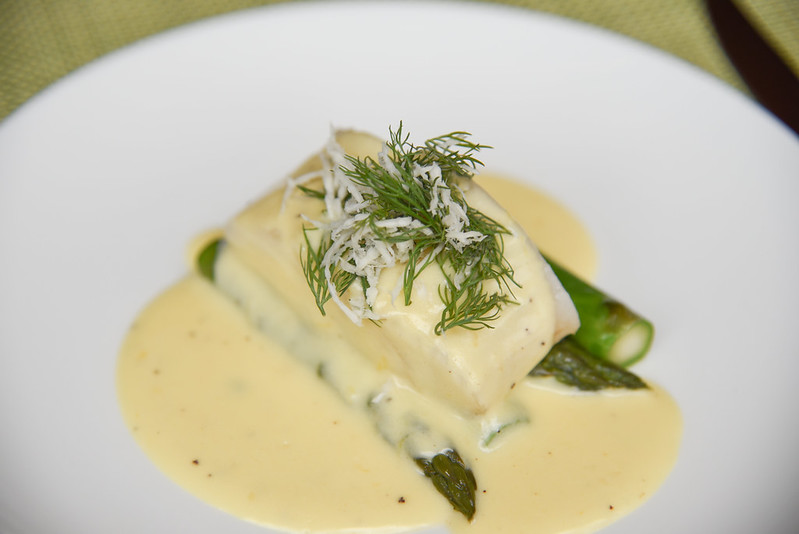 Alongside this dish, mains of pan-seared perch with chilli-lemongrass sauce, bok choy in Balinese sauce and rice with sweet potatoes; and braised beef cheek with red wine sauce and mashed potatoes with truffle, carrots and pearl onions will be served. Kikorangi blue cheese and Brie will accompany the courses, and a choice between ice cream, petit fours or fresh fruits are offered as dessert options. While I did not get to try the perch, I got to try Baked Cod instead – another common dish in the Nordics – which had an almost melt-in-your mouth quality to it. The asparagus that came on the side was especially crunchy. 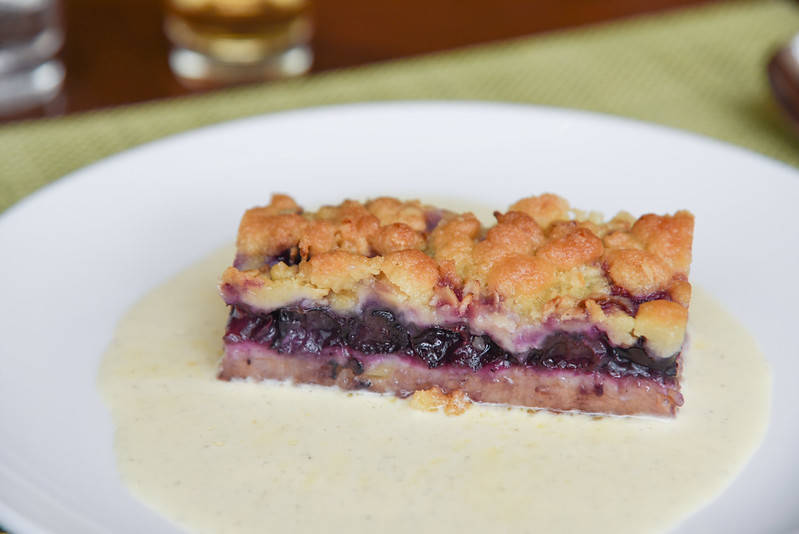 I personally have not been on a Finnair flight before (you can read my other business class flight reviews here) but blueberry juice is apparently one of the specialties, I suppose that’s because no other airline serves this in their regular beverage line-up. As an ode to that, we had blueberry pie for dessert.

Finnair has one flight daily (AY132) departing from Singapore at 11:25PM and arriving at Helsinki at 6:15AM the next day. Finnair is known for its excellent connectivity in Europe, where it flies to several continental destinations. Finnair uses the Airbus A350 to service its Singapore – Helsinki route.

In 2017, Philippine Airlines completed the refurbishment of 8 single-class Airbus A330s and fitted these with a 309-seater tri-class configuration. While the planes came from the airline’s existing fleet (the single-class equipment used to ply certain domestic routes), the new cabins came with the international destinations in mind.  This marked the start of the most recent phase of PAL’s “seat modernization” which as of this writing also include A350s, A321neos and even refurbished 777-300ER. Prior to this, the older Philippine Airlines A330 business class seats were rather unremarkable. I had written in a previous review that the older seats looked like hospital beds due to the color scheme chosen. They were designed earlier in the decade when PAL was trying to compete head-on with budget carriers.

END_OF_DOCUMENT_TOKEN_TO_BE_REPLACED

After spending a few days in Melbourne, I again flew with Qantas on my journey back to Singapore. For this particular trip, I was flying business class on the Airbus A380. Qantas has a couple of business class configurations and while they flagship business class seats are to be found in their A330s, the A380 flight had a more suitable timing for me.

If you are flying out of Australia’s airports, the benefit of business class becomes palpable as soon as you check-in. For this particular flight, it was too late for me to check-in online so I did it manually at the airport. In contrast to the economy class queue which was pretty long, I was served in no time at the business class queue. Flying business class also gives you access to the express queue at the x-ray machines and saves you time.

END_OF_DOCUMENT_TOKEN_TO_BE_REPLACED

I have in the past year been flying with Philippine Airlines with increasing frequency. After encountering a spate of delays (6 out of the last 6 PAL flights I took were delayed by at least an hour), I decided that I’ve had enough.

However, I found out sometime late last year that Philippine Airlines was rolling out its new tri-class A330-300 on the MNL to SIN route. These planes were recently refurbished with fully-flat business class seats with a 1-2-1 configuration. Finally, I thought; PAL now has a decent business class seat (though I thought PAL’s 777-300ER business class was not too bad). This led me to make a J class redemption on one of the A330 flights.

END_OF_DOCUMENT_TOKEN_TO_BE_REPLACED

It has been around 8 years since Philippine Airlines obtained its very first Boeing 777-300ER which marked the beginning of the carrier’s modernization where widebodies were concerned. While most airlines were already looking at fully flat seats and challenging what was then being offered in First Class and tailoring those for Business Class, the 777-300ER marked PAL’s first foray into the angle-flat seats. While by no means at the cutting edge; at the very least, it marked a slow transition out of the bulky and archaic recliner seats that the airline offered for the entirety of its Business Class products up until that point in time.

END_OF_DOCUMENT_TOKEN_TO_BE_REPLACED

There is no shortage of airlines to take from Singapore to European destinations and during a recent trip to Eastern Europe, I took Turkish Airlines. The carrier is known for flying to more countries than any other – even to places such as Mogadishu in Somalia, Kabul in Afghanistan, Baghdad in Iraq and Havana in Cuba. Their list of destinations reads like an adventurer’s travel bucket list.

Turkish Airlines has come a long way than just being the flag carrier of Turkey. Along with the major Middle Eastern carriers, TK is a formidable force in trans-continental flights with Istanbul proving a natural transit point on the journey from east to west (and vice versa). Marketing efforts in recent years have highlighted impressive service offerings, such as an onboard chef and an award-winning business class lounge. I was particularly excited about these aspects during my maiden flight with them.

END_OF_DOCUMENT_TOKEN_TO_BE_REPLACED

I recently had Qmiles that were expiring and had to redeem them for a flight. However, as I did not have enough miles to redeem for any of QR’s medium or long-haul flights, I decided to look at their partner awards instead. Granted, the value wasn’t exactly there with partner airlines but it was still better than just letting my miles expire. From SIN, I found myself with either MH or CX as my options. However, for the weekend trip I was planning, CX did not have any available award seats so I ended up redeeming a one-way J class flight from KUL to SIN instead.

I have very fond memories of Malaysia Airlines’ Boeing 737’s which they utilize for regional flights within Southeast Asia. Many of MH’s Boeing narrow body planes have the Sky interiors which feature a roomier cabin with mood lighting.

At KUL, check-in was pretty straightforward. Other than getting the standard invite for the lounge, business class passengers also get a fast-track immigration ticket – a much-appreciated convenience as the queue for immigration could get quite long.