There is no shortage of airlines to take from Singapore to European destinations and during a recent trip to Eastern Europe, I took Turkish Airlines. The carrier is known for flying to more countries than any other – even to places such as Mogadishu in Somalia, Kabul in Afghanistan, Baghdad in Iraq and Havana in Cuba. Their list of destinations reads like an adventurer’s travel bucket list.

Turkish Airlines has come a long way than just being the flag carrier of Turkey. Along with the major Middle Eastern carriers, TK is a formidable force in trans-continental flights with Istanbul proving a natural transit point on the journey from east to west (and vice versa). Marketing efforts in recent years have highlighted impressive service offerings, such as an onboard chef and an award-winning business class lounge. I was particularly excited about these aspects during my maiden flight with them. 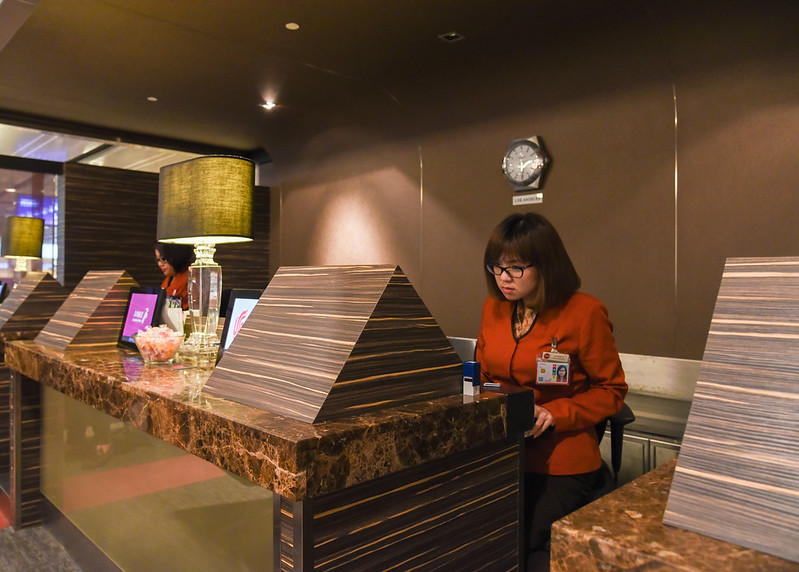 I arrived at Singapore’s Changi Airport extra early and the Turkish Airlines check-in counters at Terminal 1 weren’t open yet (they open 3 hours before departure). Instead, I was directed to the SATS Premier Check-in Lounge (not to be confused with the SATS Premier Lounge at airside). The early check-in counters are more comfortable than the conventional counters – with the option of checking in for a flight while sitting down. Mineral water is also provided! 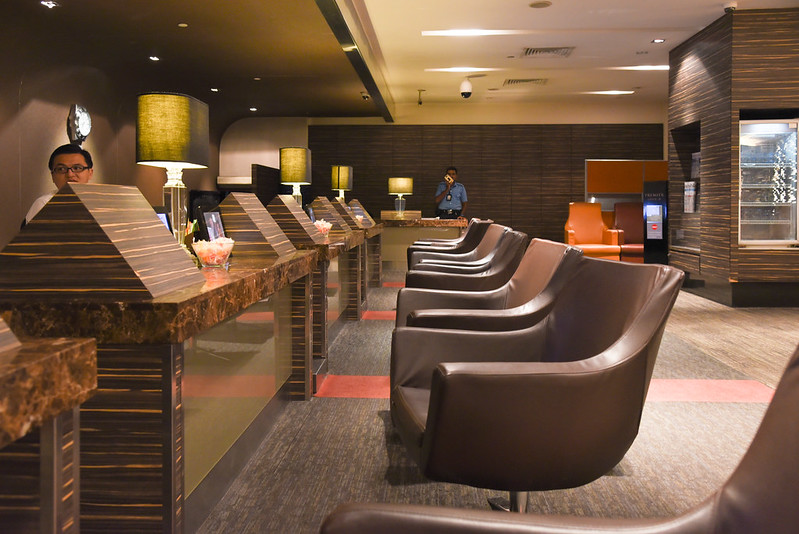 It is not usually mentioned in DBS materials but I noticed a mobile display inside the check-in lounge which mentioned that DBS Asia Treasures clients (those with assets of S$1.5 million and above) are also welcome to check-in at the SATS Premier Business Class Check-in Lounge.

After obtaining my boarding pass, I was politely notified that as a business class passenger, I could access the SATS Premier Lounge at Terminal 1. However since Turkish Airlines is a Star Alliance member, I decided to take the airport train to Terminal 3 in order to access the Silverkris Lounge.

As I had quite a bit of time on my hands, I checked out the Silverkris Lounge at both Terminal 2 and 3 in order to see which was more crowded during the Friday evening that I was there. Overall, I found the Terminal 3 lounge to be more crowded (despite its bigger size). You can check out my comparison of both lounges here. 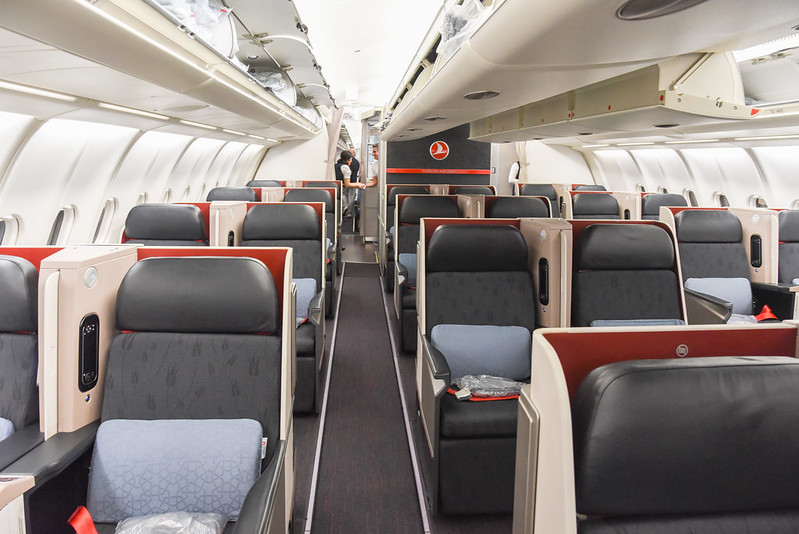 Turkish Airlines uses the Airbus A330-300 for its flights between Singapore to Istanbul, though that will be changed soon to the Boeing 777-300ER. 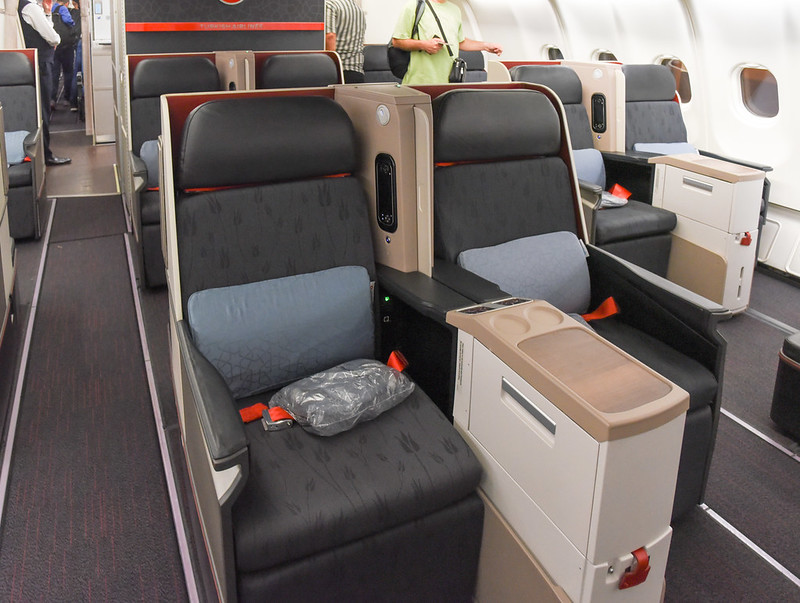 The plane consists of 261 economy seats and 28 business class seats. The business class cabin has 5 rows of seats, arranged in a 2-2-2 configuration. 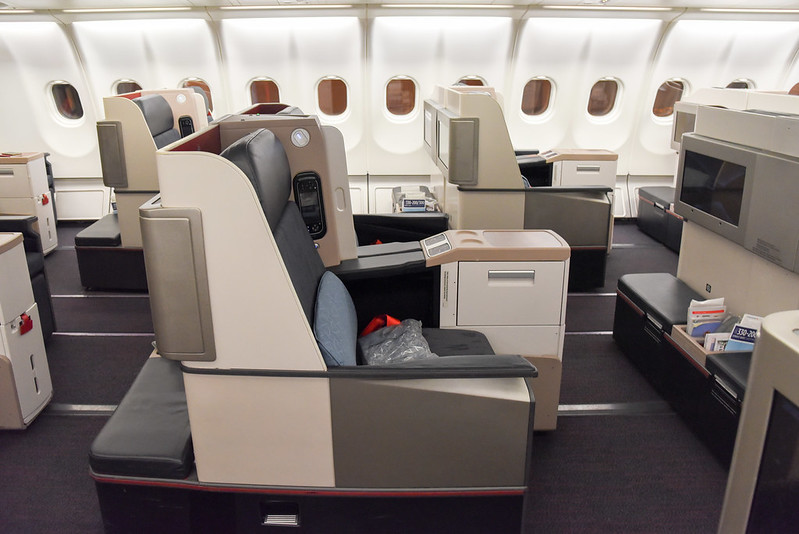 The seats are lie-flat with a 177 degree angle. With a seat pitch of 61 inches and width of 21 inches, it’s a relatively spacious affair. In front of the seat is an ottoman which also doubles as a storage space. I was able to stow away my camera, mobile devices and a couple of other large items inside. 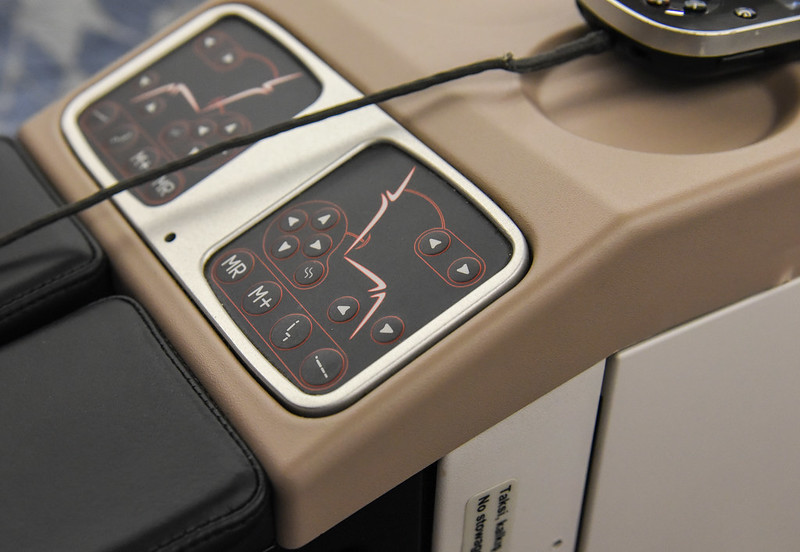 The seat controls are pretty intuitive. It even comes with a massage function! 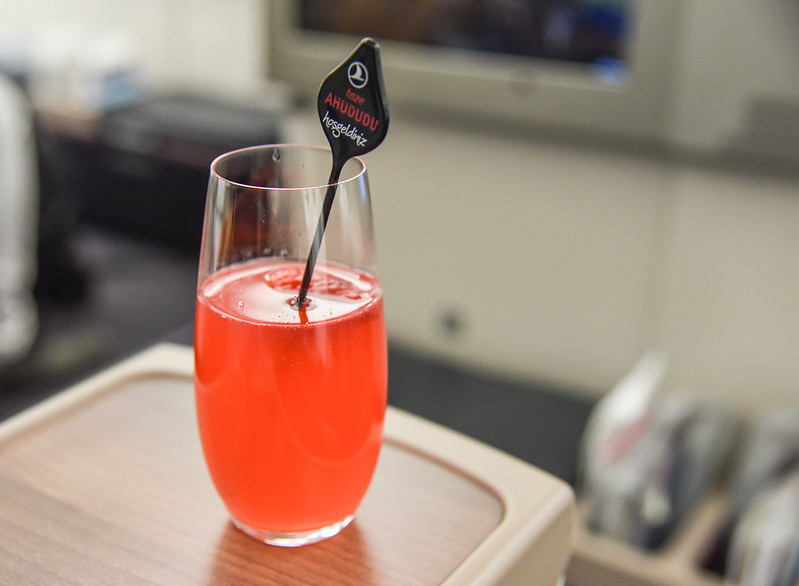 As soon as I sat down, crew members came by to serve the Turkish Airlines signature welcome drinks. Other passengers started coming in and pretty soon, it became apparent that it was going to be a full flight even in the business class cabin. 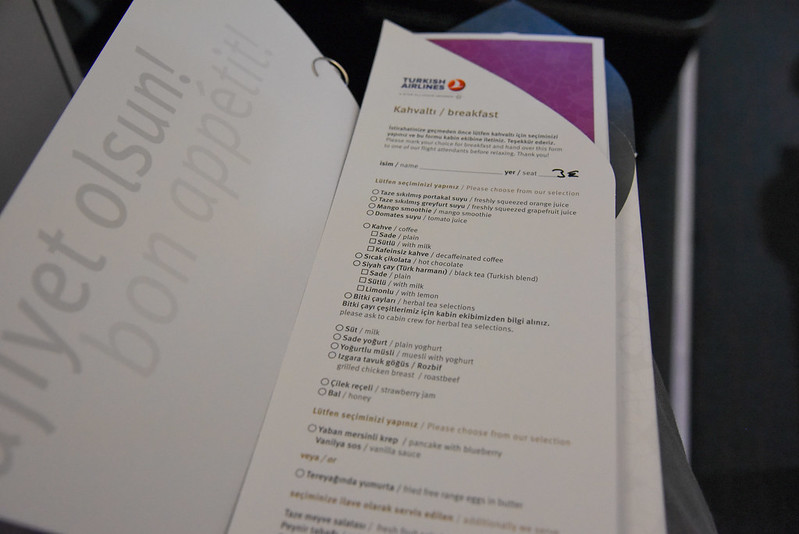 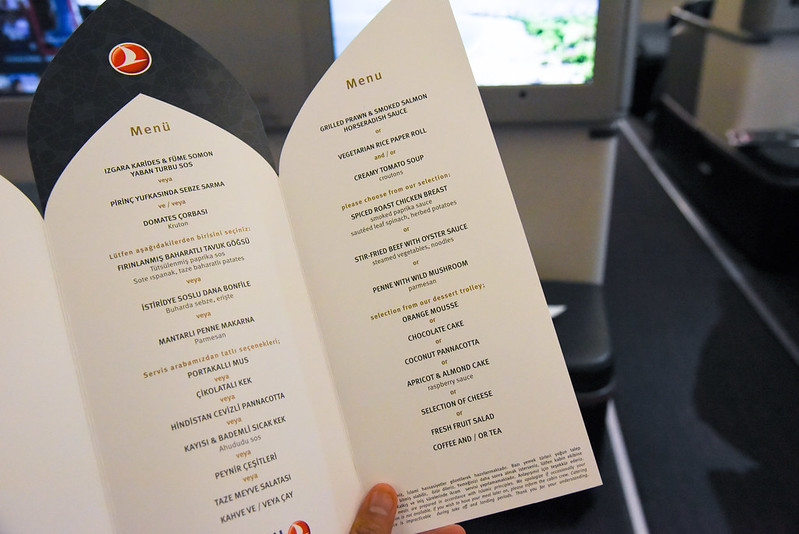 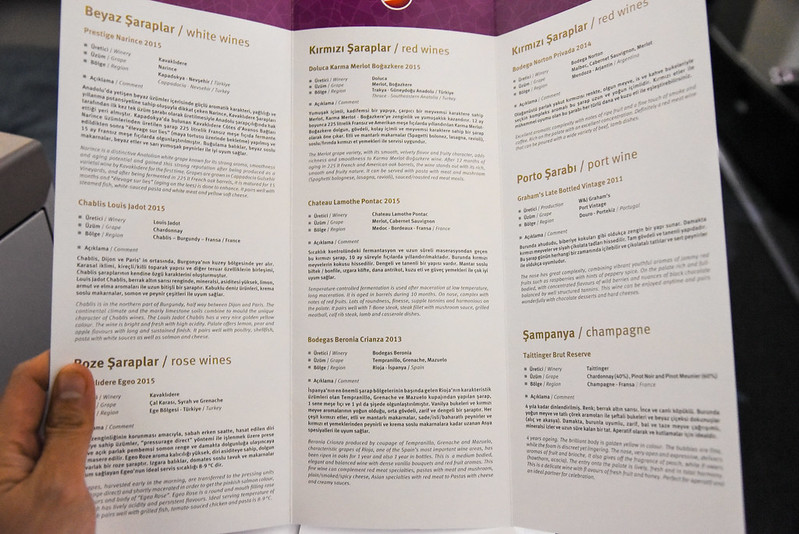 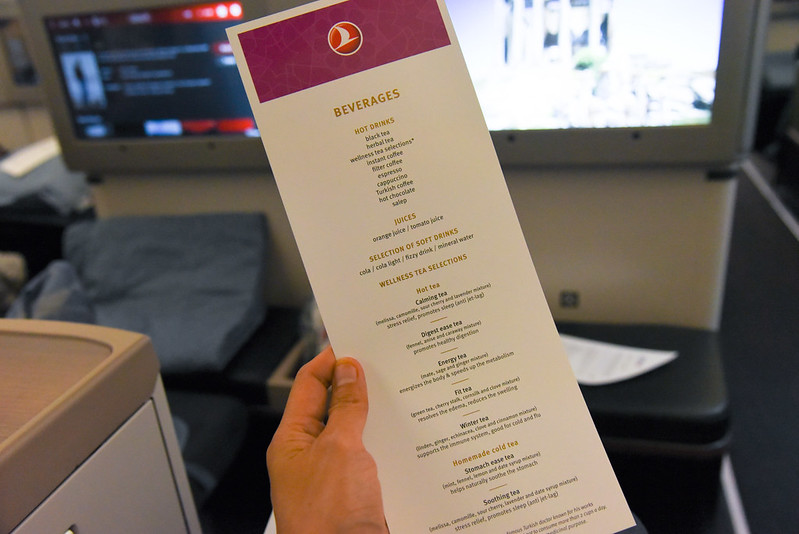 I was quite surprised to see a pen on my seat at first but soon learned what it was for when I received the menu from the onboard chef. It was a relatively sizable compendium with the main (dinner) menu followed by the drinks selection and breakfast options, the latter which required me to tick. 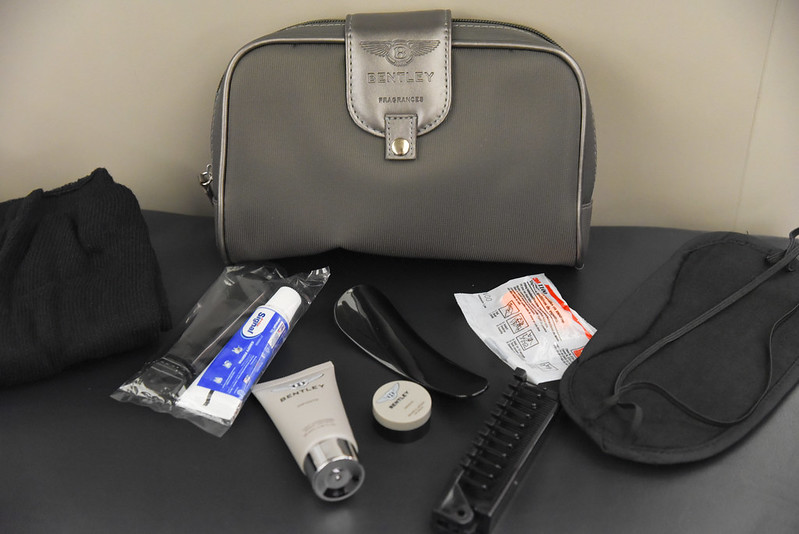 The airline is known for giving amenity kits from various luxury car companies to business class passengers and during my flight, I received Bentley-branded kits. There were quite a lot of things inside including earplugs, an eye mask, a pair of socks, lip balm and body lotion. 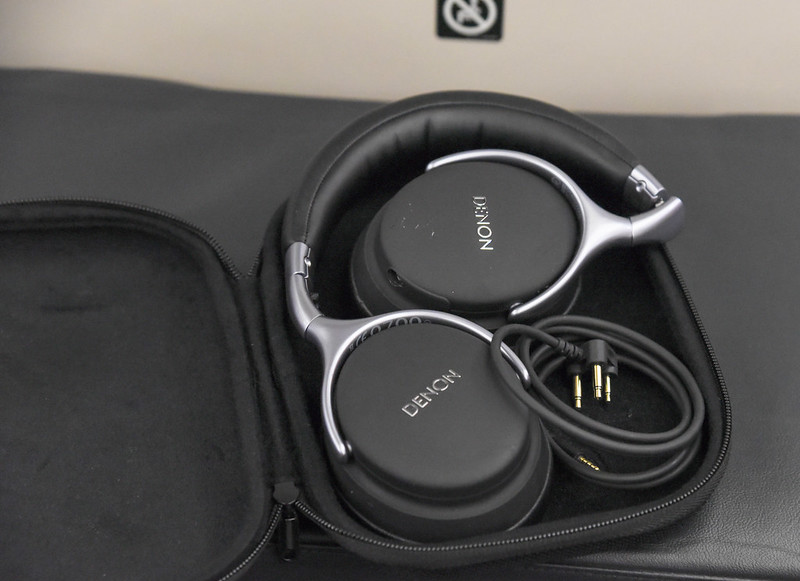 I was also handed noise-cancelling headphones from Denon. This is on top of the standard headphones which are already placed by my seat. 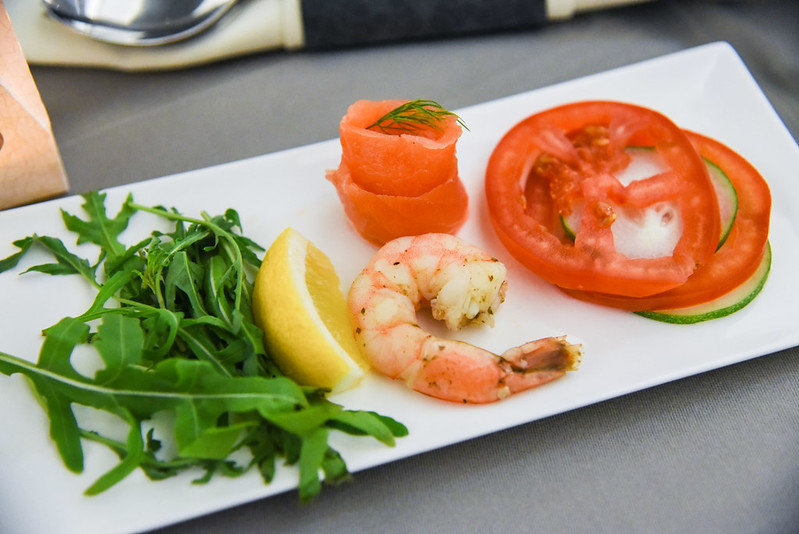 Around 30 minutes after takeoff, meal service started. I was first presented with the appetizer – a nice plate of Grilled Prawn and Smoked Salmon with Horseradish. 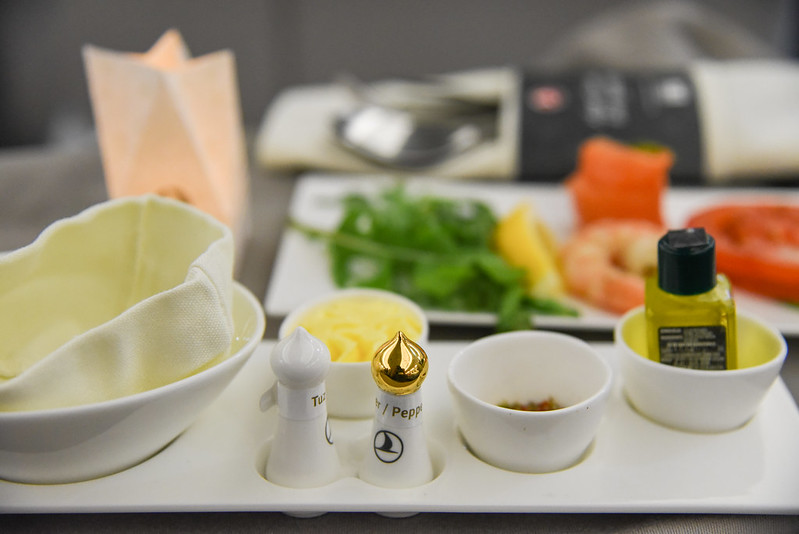 I was also served some bread and this cute pepper shaker. 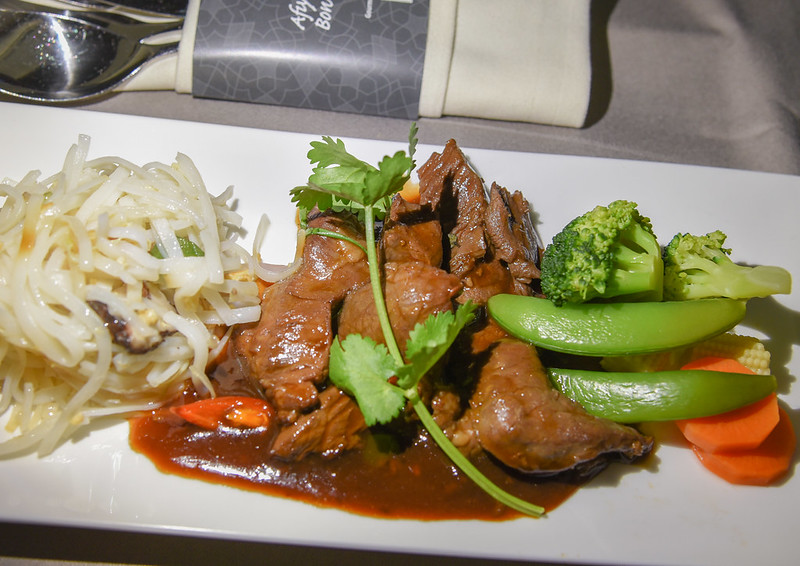 For the mains, I decided to go with the Asian option – Stir-Fried Beef with Oyster Sauce. The meat was unbelievably tender and delicious. 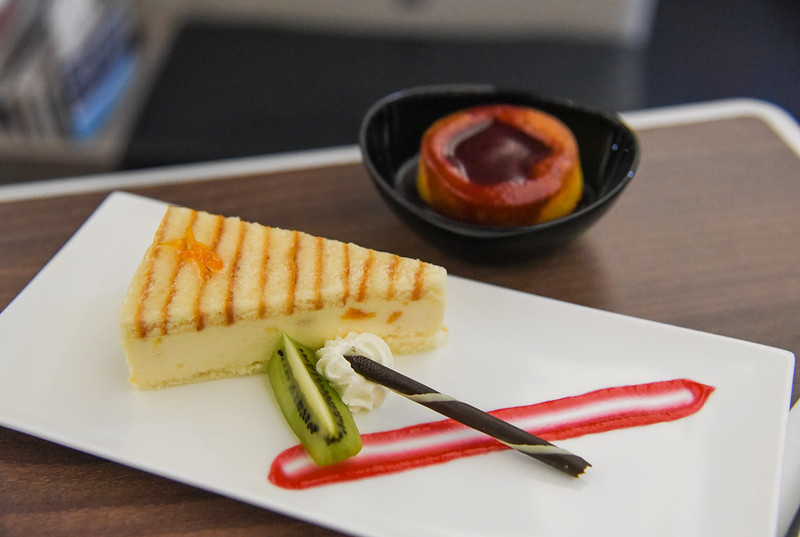 The trolley came by for the dessert selection. There were so many pieces of exquisitely presented sweets, akin to a bakery that I could not stop with just one cake. I picked a slice of orange cake and a warm apricot tart. The latter was heavenly! 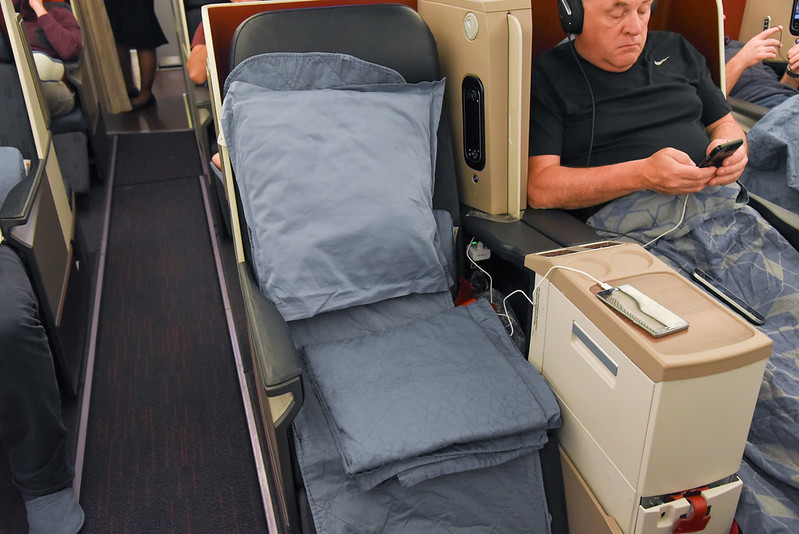 After the meal service, a flight attendant came by for turndown service. This involved a mattress and quilt that was put on my seat. There was even a waist-level pillow for ergonomic support. The crew made the conscious effort to do turndown service on every seat – a level of detail I usually don’t see in business class. 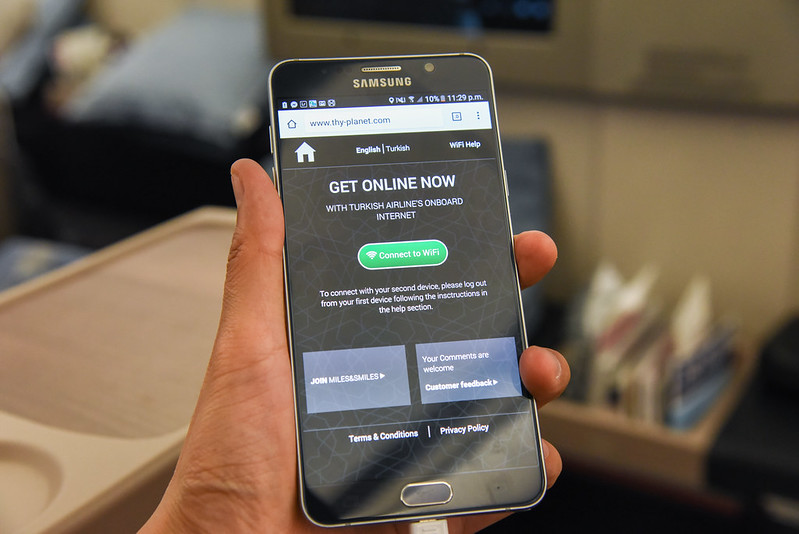 Throughout the flight, I was also using the complimentary inflight wifi for business class passengers. The speed was generally reliable. I could post videos on Instagram stories as well as stream from Youtube. For economy class passengers, the internet is chargeable at US$9.99 per hour or US$14.99 for 24 hours – still quite reasonably priced (SQ for instance, charges by data usage). 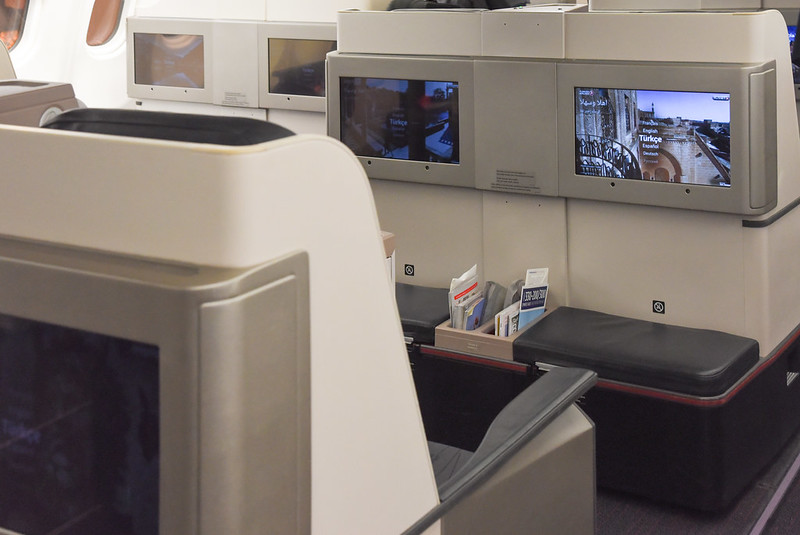 By this time, I was already a bit tired but I squeezed in an hour or two to watch some programmes on the inflight entertainment system. There is a wide selection of movies, TV shows, games and songs available – definitely too much to take in even during an intercontinental flight. 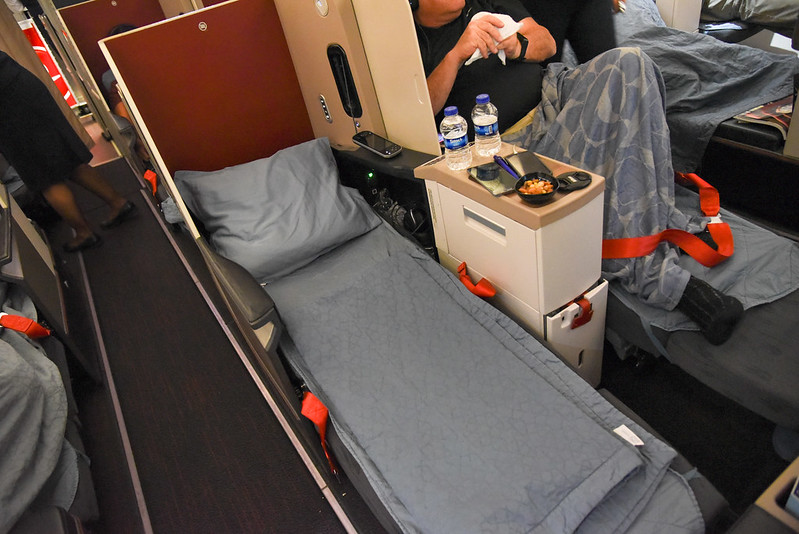 the seat when fully reclined

Somewhere over India, I fell into a deep slumber.

I woke up around 6 hours later (the longest duration I’ve even slept on a plane) as the lights came back on and crew members were busily setting table mats for breakfast.

Breakfast consisted of freshly-squeezed orange juice and a warm cup of hot chocolate. 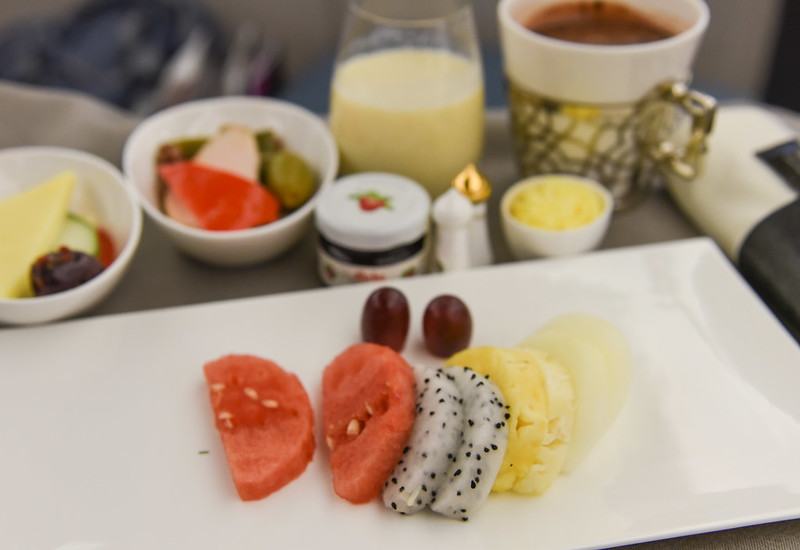 This was followed by two courses. First came the fruit platter. 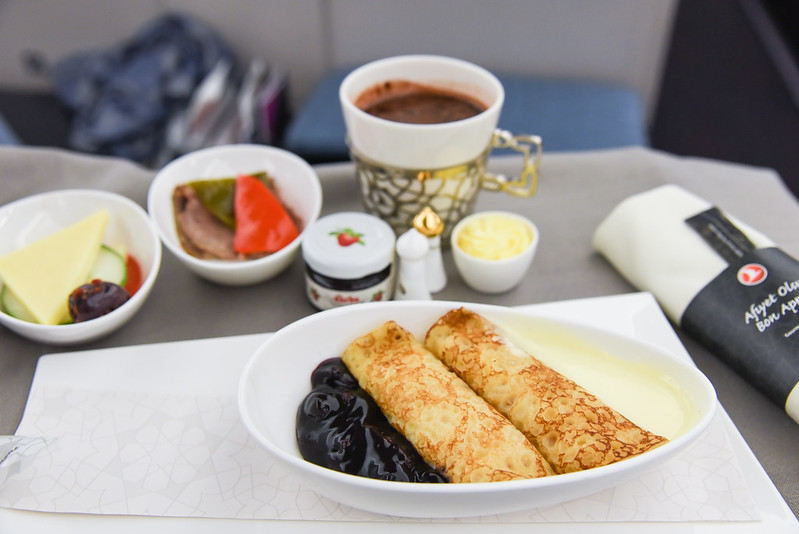 I chose to have pancakes for breakfast. It was presented in the Turkish way, thin and wrapped like a cylinder. It came with a side of cheese and salad. Overall, the pancakes went nicely with fresh strawberry jam. 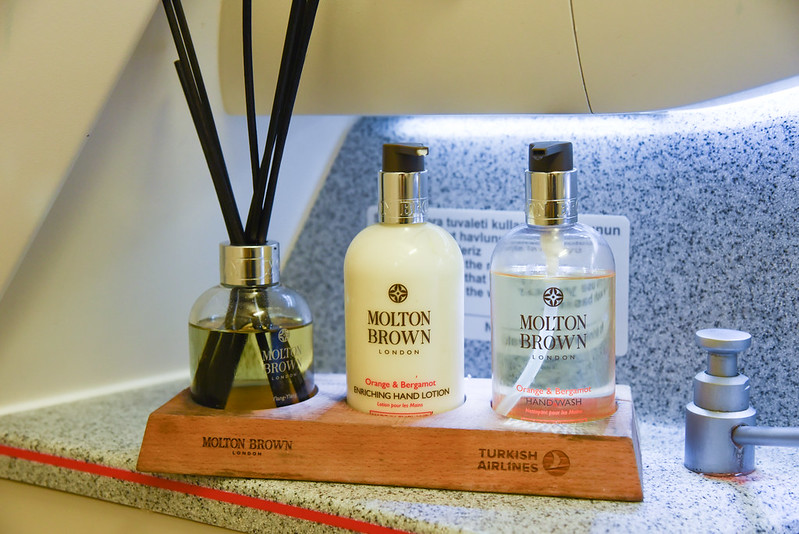 After breakfast, I went to the lavatories to wash up a bit before arrival. The toilets are of the same size as the economy class ones but came with some extra decor such as fresh flowers and toiletries from Molton Brown.

A couple of minutes later, we landed in Istanbul’s Ataturk Airport and it quickly dawned on me how I was last here almost exactly 10 years ago. The airport sure has changed a lot and there are more boutiques lining the transit area. I followed the signs towards the Turkish Airlines Business Class Lounge which I will be writing more about in another post.

In the heavily competitive airline business, Turkish Airlines knows where to position itself by cleverly enhancing certain aspects where its competitors may have overlooked.