I have in the past year been flying with Philippine Airlines with increasing frequency. After encountering a spate of delays (6 out of the last 6 PAL flights I took were delayed by at least an hour), I decided that I’ve had enough.

However, I found out sometime late last year that Philippine Airlines was rolling out its new tri-class A330-300 on the MNL to SIN route. These planes were recently refurbished with fully-flat business class seats with a 1-2-1 configuration. Finally, I thought; PAL now has a decent business class seat (though I thought PAL’s 777-300ER business class was not too bad). This led me to make a J class redemption on one of the A330 flights.

However, around a month or two prior to my flight, I went to check the seat map again and realized that PAL had changed the aircraft being used for my flight. It was now revised with the A340, to my dismay. 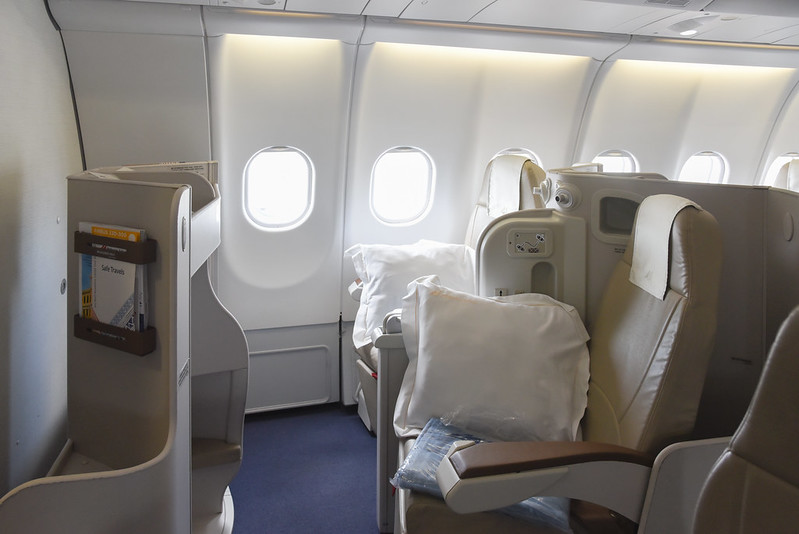 Come the day of my flight, I received an email notification that my flight was going to be delayed (no surprises here!). I also noticed that the aircraft was again revised – and this time it’s back to the A330. After checking the serial number however, I realized that this is one of the old type A330s which PAL uses to fly to several Middle Eastern destinations. These planes offered highly uninspiring seats and were redone between 2012 and 2014 when Philippine Airlines was trying to go head to head with budget airlines. As a result, even the seats in business class looked like premium economy seats similar to what some budget carriers that fly long-haul offer – an example that comes to mind would be Scoot’s Scootbiz. 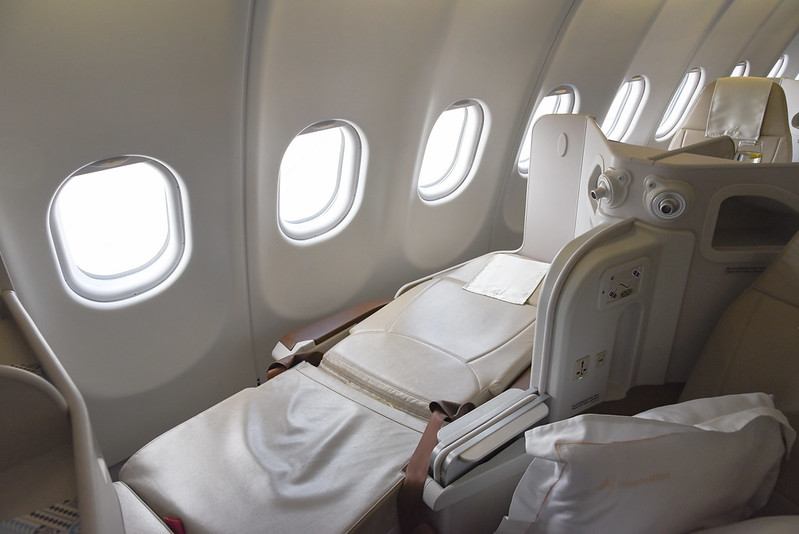 My first impression when I boarded the plane – the seat kind of looked like a hospital bed with its grey shade. The layout is 2-2-2 so window seats don’t get direct aisle access. Seat pitch is 60 inches and the width at 21 inches. The seats can be made to lie flat. 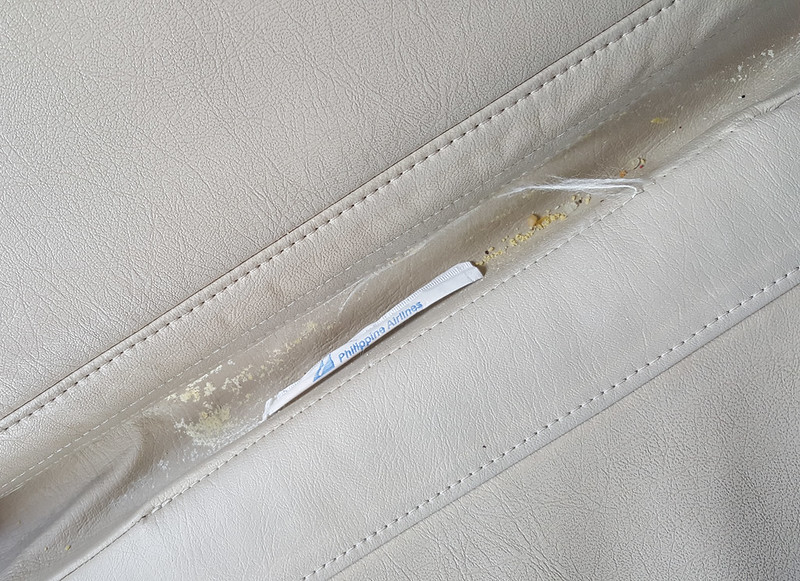 toothpicks and breadcrums on my seat – gross!

I wasn’t really planning to sleep during the flight but I went to adjust my seat to full recline just to see the extent the seat could go. To my horror, I found some toothpicks and peanut crumbs lying on the seat. Gross. Seemed like the seat was not cleaned at all. The other thing about the off-white/grey leather is that it appears dirty easily as compared to darker shades – rendering the premium proposition lost to business class passengers. 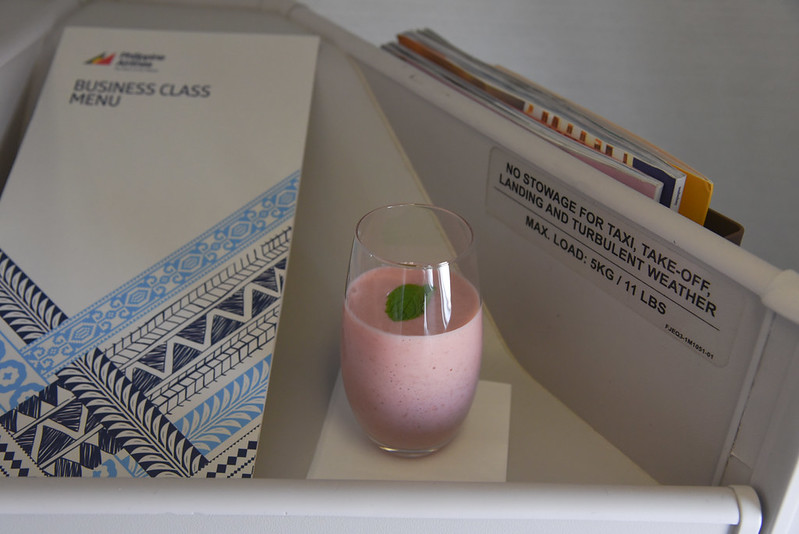 Prior to the flight, they also served welcome drinks. While I have fond memories of PAL’s mango smoothie, it was not available for this flight. I opted for banana smoothie instead. 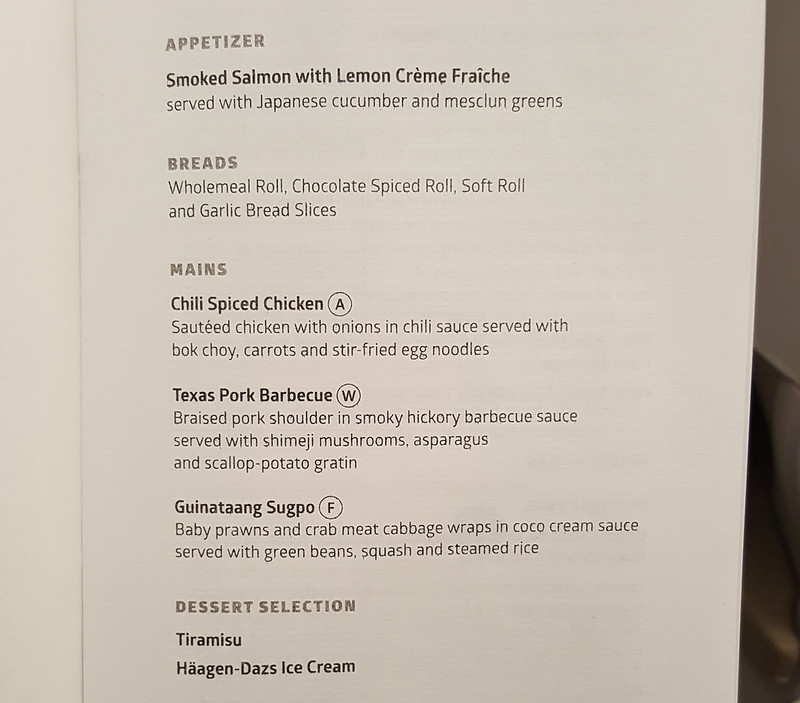 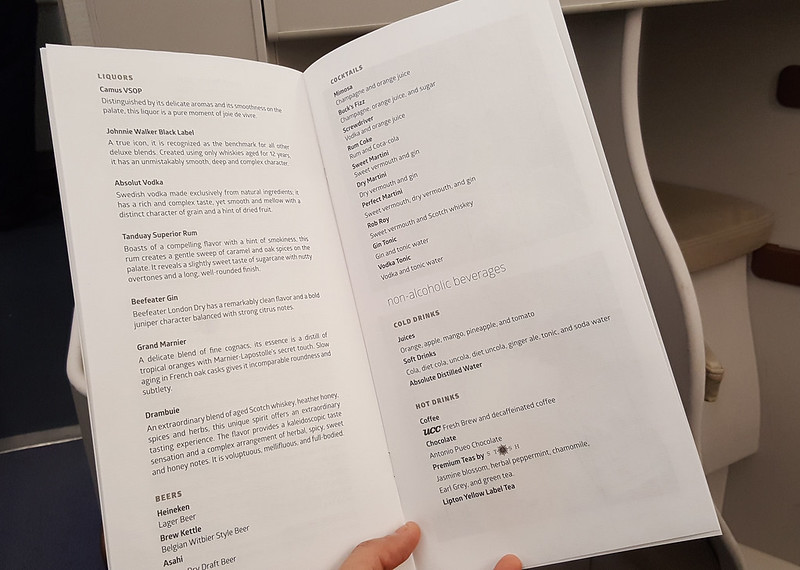 The crew then proceeded to distribute the food and drinks menu for the flight. If there is anything that I really like about Philippine Airlines, it’s that the food is usually quite tasty even in economy class. 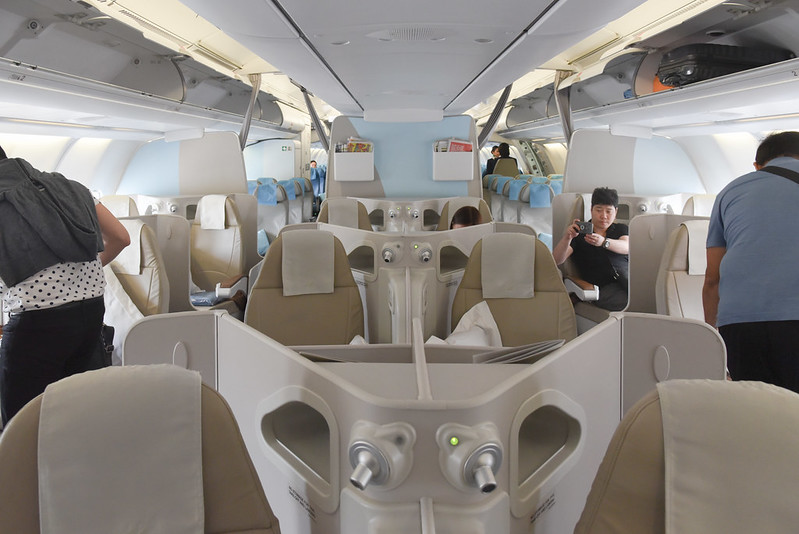 As mentioned, the seats in this version of PAL’s A330 were designed when the airline was trying to be a more glorified version of a budget airline. Thus, the seats don’t actually come with any entertainment screens. Instead, the crew distributed iPads and earphones for guests to use. The device contains PAL’s inflight entertainment system called myPAL. My iPad was for some reason configured in Korean and I could not change the language back to English. I was still able to navigate through the entertainment system. There are a lot of Filipino movies. There is a nice variety of Hollywood movies as well but the selection is rather dated. 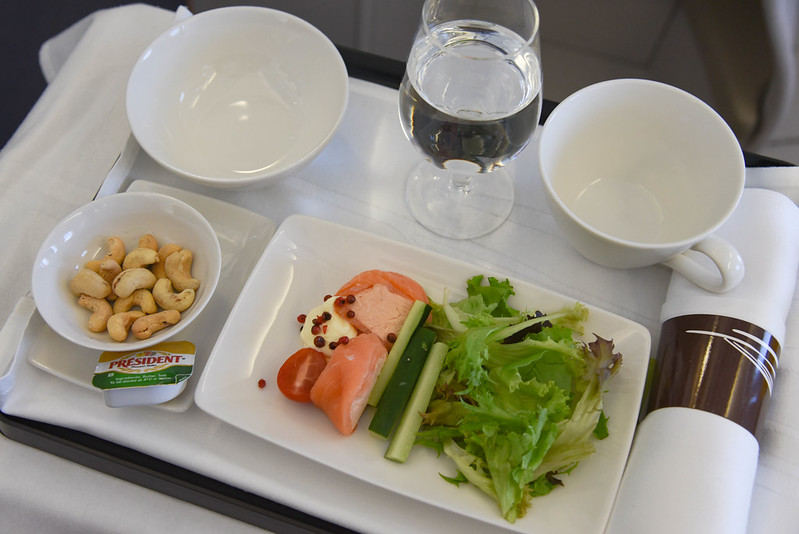 The meal for this flight had three courses and I started with the Smoked Salmon with Lemon Creme Fraiche. It’s essentially a salad dish which I found unexceptional. However, the bread basket soon came and I picked my favorite garlic bread (I had two) which came hot and fragrant. 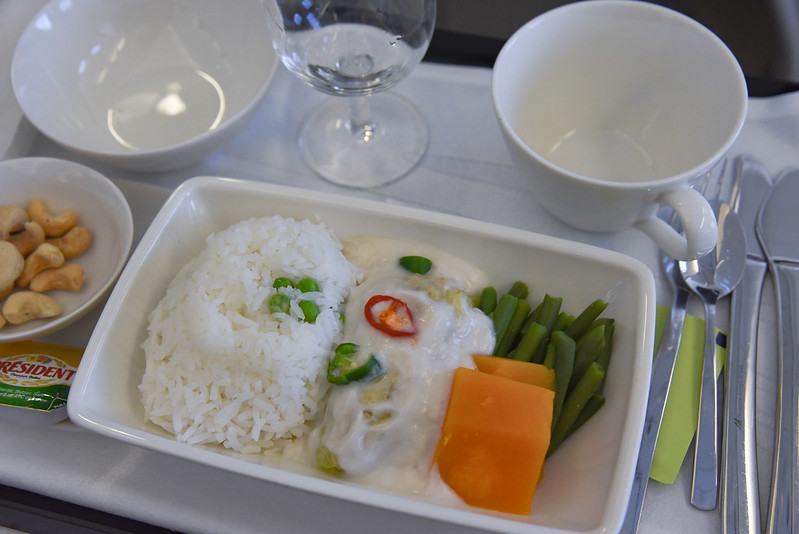 There were three choices for the mains but I decided to go for the Filipino option – Guinataang Sugpo. While I have had this dish before in the Philippines, this was a clever interpretation with the crab and prawn meat wrapped in cabbage against the coconut cream sauce. I quite liked the dish and was impressed with the flavors considering this was catered out of Singapore and not Manila. 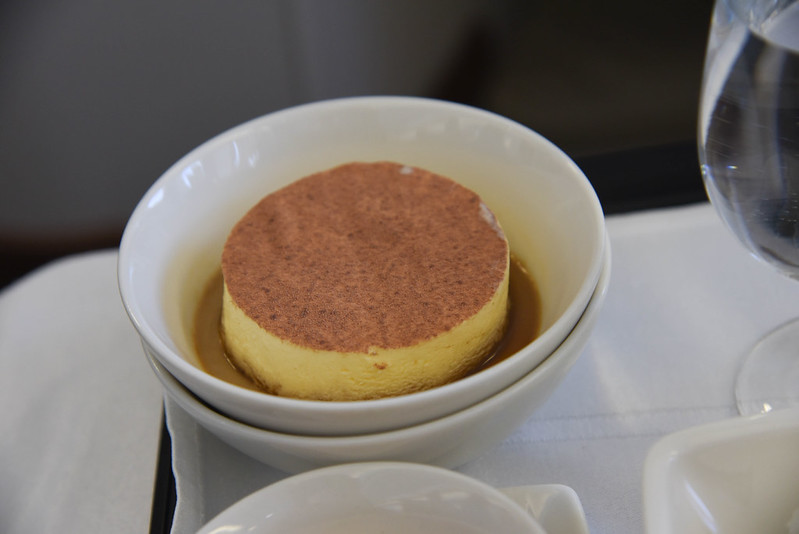 For dessert, there were two choices – either Haagen Dazs ice cream or tiramisu. I wanted ice cream but was informed that the Haagen Dazs was no longer available. I found this rather disappointing, as I wasn’t even one of the last passengers to have dessert and thought that the plane catering should have made sure that there were enough desserts for passengers to choose from especially since this was in premium class. The crew member reassured me that the tiramisu was very good so I reluctantly chose that. I ended up finishing the whole thing. It didn’t look much and I rarely finish cakes served on a plane, but the tiramisu was on point. 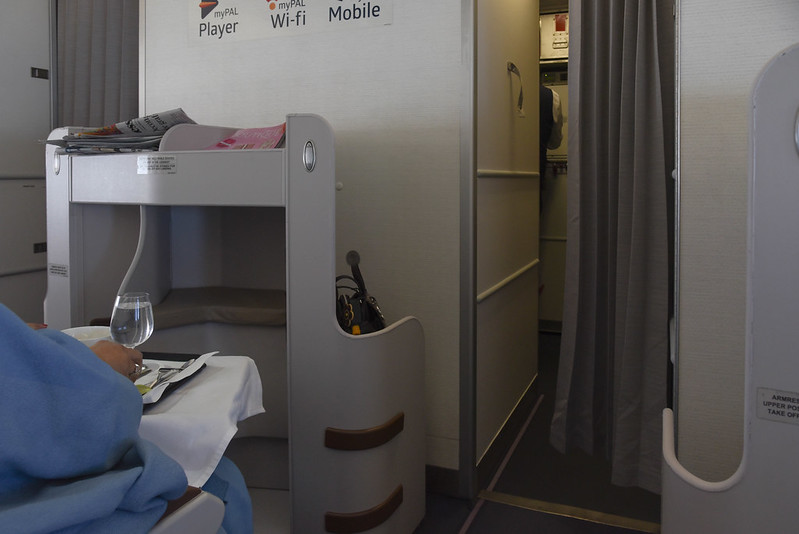 The flight had just an hour left after the meal so I decided to take a nap. Before I knew it, the captain made the announcement that we were commencing our landing shortly and that we had to straighten our seats.

The only redeeming factors of the flight were the service and the food. I’ve always found PAL’s inflight crew to be one of the best in terms of service. They always try to make the most out of the limited and dated infrastructure. As for the food, it was excellent as always though finding that they ran out of the second dessert option was rather disappointing for a business class proposition. All in all, I thought this wasn’t enough to compensate for my dirty seat and the spate of delays I’ve been experiencing with this airline. I will probably hold off from flying with Philippine Airlines for the foreseeable future. Assuming the high proportion of flight delays continue, the only reason why I’ll try them out again is to experience the new tri-class A330s.