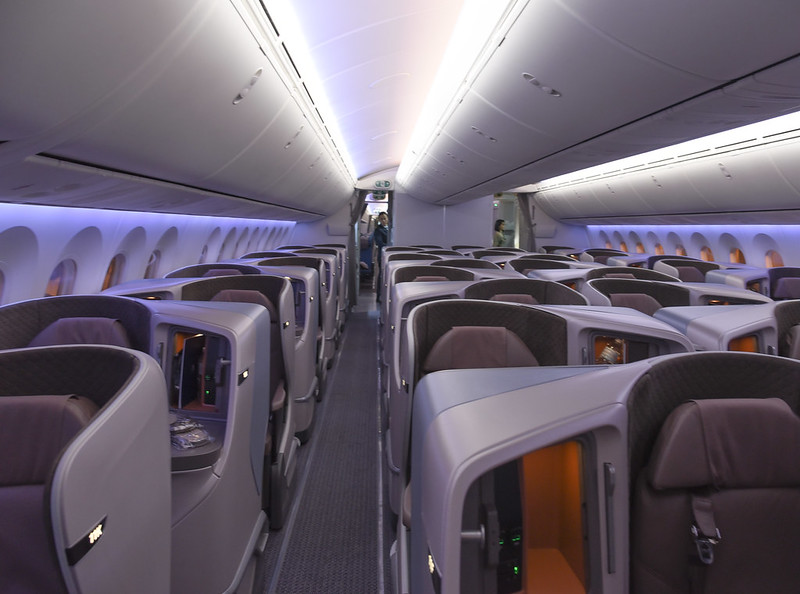 SQ is the first airline to operate the Boeing 787-10 Dreamliner and the carrier has configured theirs with 337 seats – 36 in Business and 301 in Economy Class. As compared to the retrofitted 777-200s and the A330s, the Business Class in the 787-10 Dreamliners come with a seat configuration of 1-2-1 to allow aisle access from every seat. 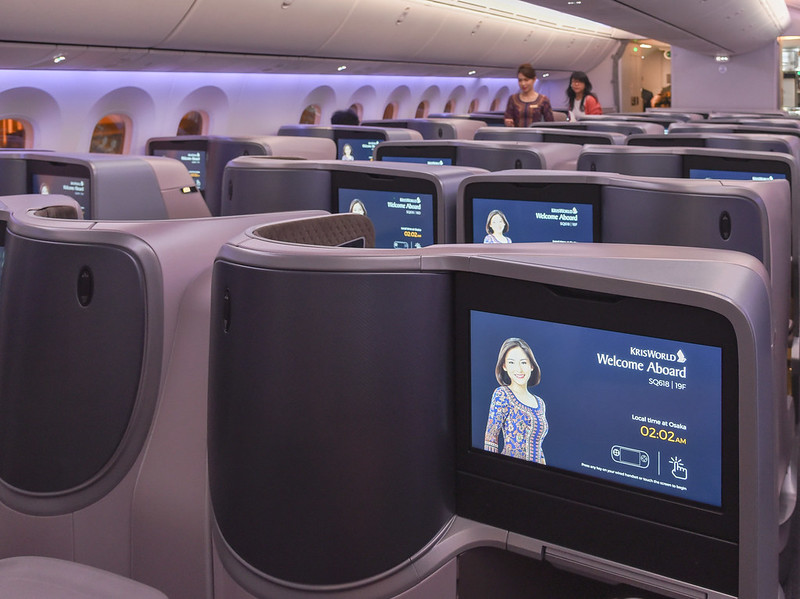 The Business Class seat on SQ’s Dreamliner can be made to extend to 76-inch fully flat beds. The width is 26 inches which is a bit narrow. Seats are upholstered with a fine leather texture called “Alcantara” which is normally used in high-end cars and yachts. 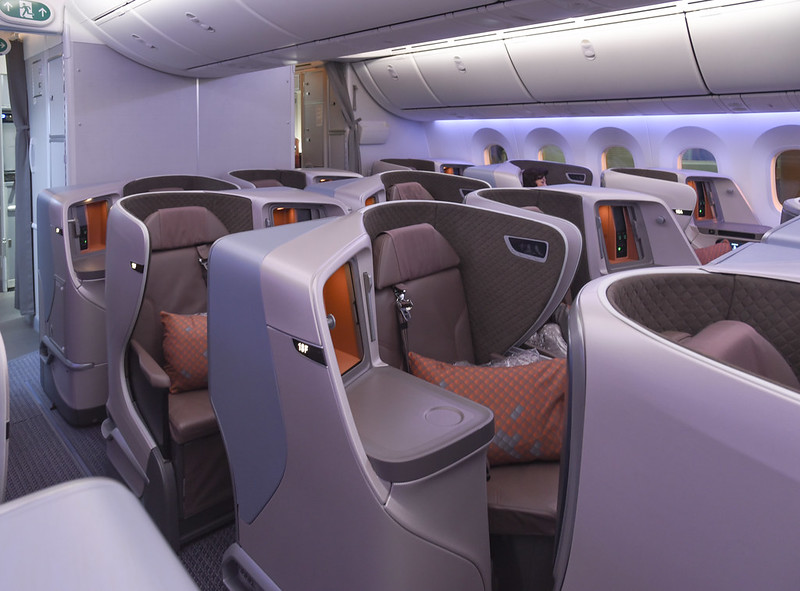 The seat indeed looks very luxurious when I first approached it, with the feel of a mini cubicle all to myself. The seats are also laid out with two different configurations in alternating rows – the first requires the passenger to pass through a sizeable platform and a mini-cabinet before reaching the actual seat. The second has the seat situated in the outer area with the mini-cabinet + platform located inside.  For the first configuration, one thing I noticed is that the opening leading to the seat is quite narrow – other bloggers have measured the actual opening and found it to be only 9 inches! Depending on one’s size, some passengers may have to turn a bit to get in so you might want to pick the other rows where the actual seat is more accessible. That being said, those seats that are semi-shielded from the walkway are a tad more private.

Tip: Business Class passengers get 30mb free WiFi. Anything beyond that is chargeable.

Upon reaching my seat, some crew members came by to remind those passengers who availed of “Book the Cook” about what they ordered. For this particular flight, as I was heading to Japan, I wanted to check out the Japanese menu so I did not pre-order my meal. 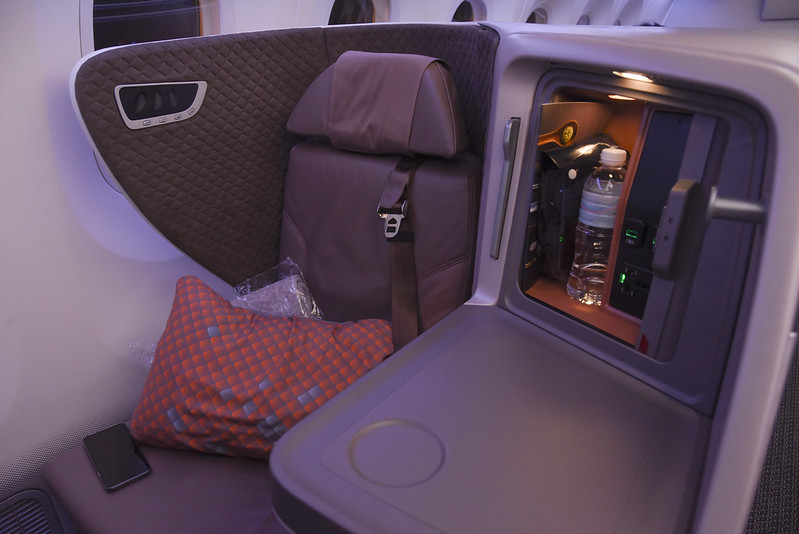 Unlike the Business Class seats in SQ’s A380s, there aren’t that many individual storage spaces in the Dreamliner which isn’t exactly a bad thing. Whatever valuables passengers have can be compartmentalized into the drawer beside the headrest. When I opened it, I found a handy bottle of mineral water ready to be consumed as well as the inflight headphones. There is also some extra storage space below the footrest. 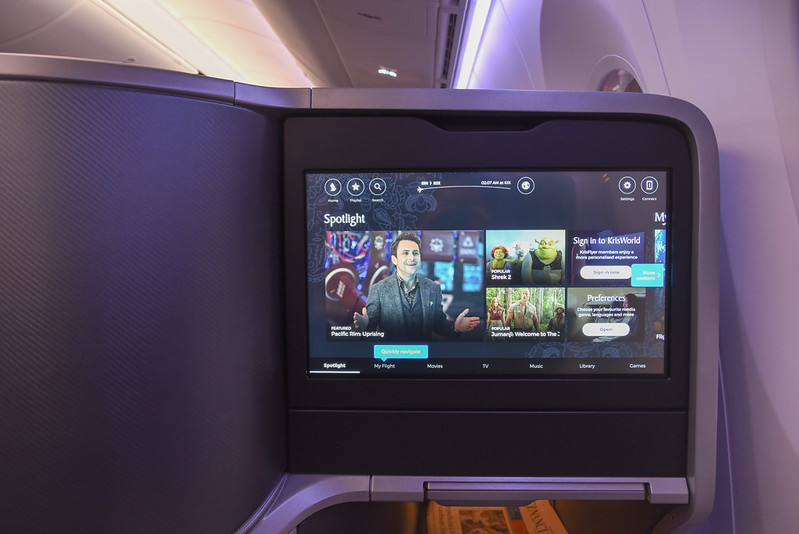 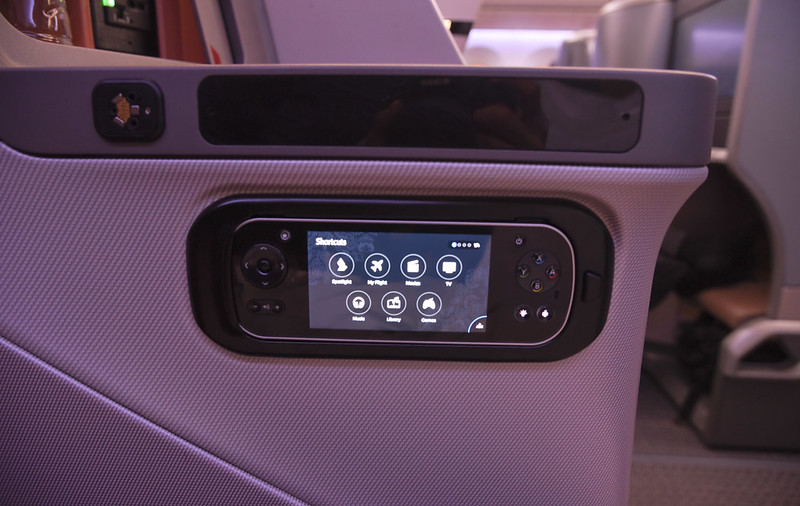 Passengers are literally spoiled for choice entertainment-wise with Krisworld being flashed on a high definition 18 inch touchscreen. A remote by the armrest allows for control of the entertainment system as well as lighting. 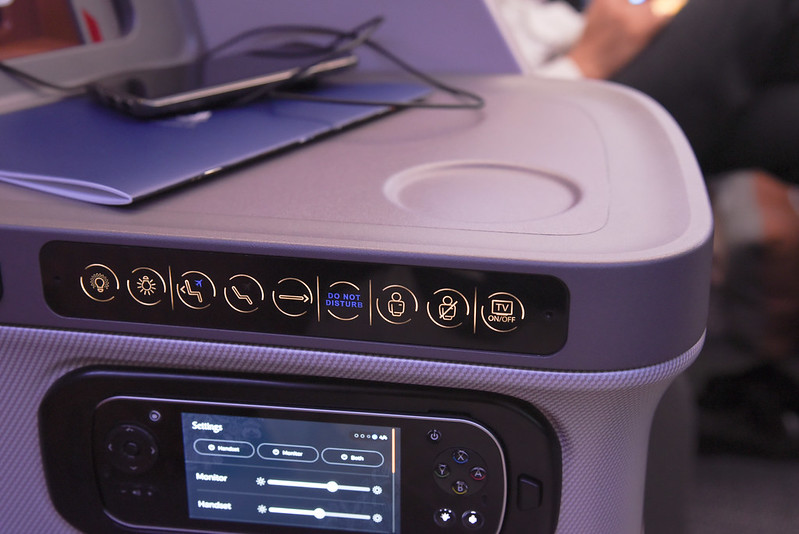 Adjusting the seat is a breeze in the Dreamliner with a mere three buttons to choose from – one for sitting upright, one for reclining and the last one for laying the seat flat. It is quite intuitive and requires very little assistance from the crew. 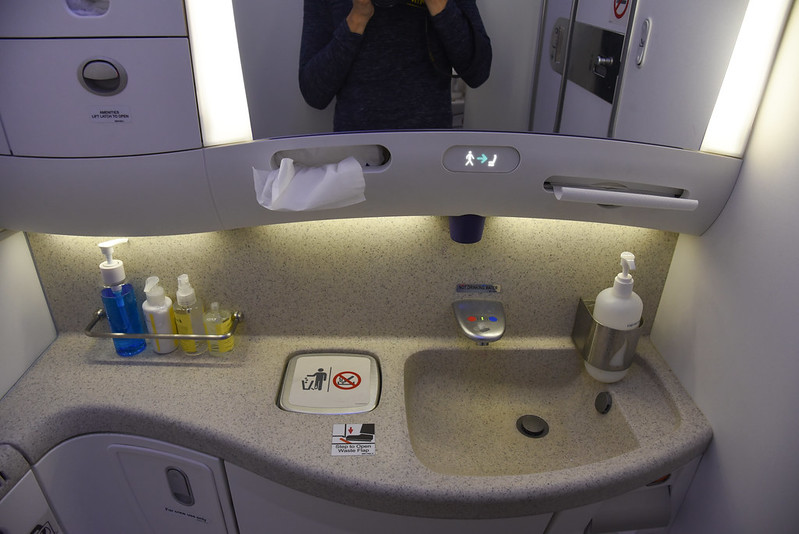 The lavatory in Business Class on the Dreamliner is quite standard. Aside from the dental kits and razors stowed away in the drawers as well as the Penhaligon toiletries, there is little else to distinguish it from the Economy Class lavatories. Even the orchids which are usually placed by the vanity mirror were nowhere to be found.

Pardon me for not having any photos of the seat laid flat but I was so sleepy by this time that I dozed off almost immediately after the plane took off. I was able to sleep for a good 4 hours until a crew member woke me up for meal service. The “Alcantara” texture of the seat agreed with me and this was probably one of the longest durations I’ve slept on a plane despite the relatively narrow setup. 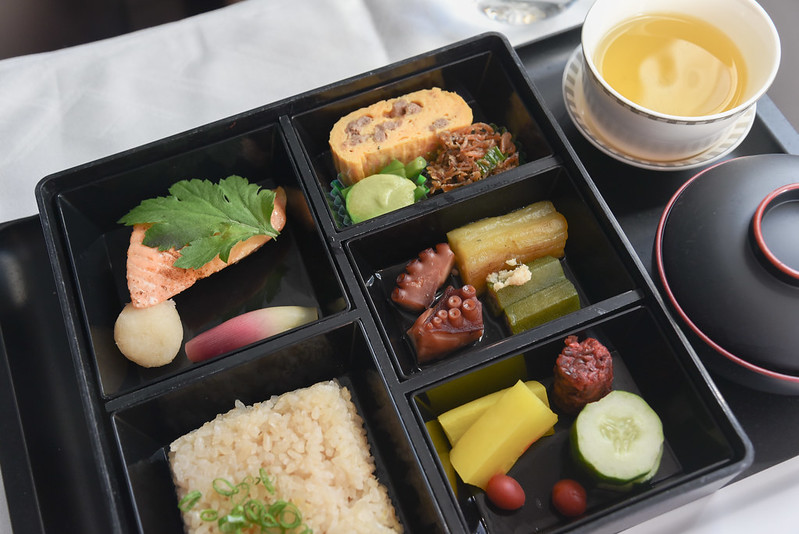 I was taking a red-eye flight to KIX and was a bit dismayed to find that the Japanese option – the Hanakoireki menu – on the flight was a toned-down supper version. The menu actually lists six dishes which I initially thought was an elaborate dinner but all I got was a bento with small slices of seafood and vegetables here and there. It also did not help that the taste was not up to SQ’s usual standards. In a cost-cutting move, SQ likely rationalized that most passengers will eat little during a red-eye flight. However, SQ is not charging any less in Business Class for red-eye flights versus the daytime flights. I have quite a large appetite and don’t mind eating a full course dinner during the wee hours of the morning and wished that option existed. When I took Qatar Airways Business Class a couple of years earlier on their Dreamliner, dinner was a multi-course affair – even at 3AM.

One can go on to nitpick about the seat but if viewed against the current array of regional Business Class products in the aviation industry, SQ’s offering on the Dreamliner represents some of the most compelling short-haul/medium-haul options in the market today. To have a fully-flat bed on a short flight is a real treat and a change from the past when these kinds of seats were mostly just available for long-haul flights. Speaking of long-haul flights, the regional Business Class product compares favorably with what most airlines can offer for long-haul Business as well. My only gripe is the relatively narrow seat and entryway. The toned down meal service for the red-eye flight was another downer but apart from that, I enjoyed my flight very much.