It has been around 8 years since Philippine Airlines obtained its very first Boeing 777-300ER which marked the beginning of the carrier’s modernization where widebodies were concerned. While most airlines were already looking at fully flat seats and challenging what was then being offered in First Class and tailoring those for Business Class, the 777-300ER marked PAL’s first foray into the angle-flat seats. While by no means at the cutting edge; at the very least, it marked a slow transition out of the bulky and archaic recliner seats that the airline offered for the entirety of its Business Class products up until that point in time.

I have always wanted to try Philippine Airlines’ interpretation of the B777-300ER, having had great memories of the aircraft with Emirates and Qatar Airways. On a recent flight from Manila to Tokyo (Haneda), I finally had that chance.

I was in MNL for an early morning transfer for my flight to HND – having taken the same airline from SIN earlier that day. My layover was around 4 hours so I stayed at the Mabuhay Lounge at Ninoy Aquino International Airport Terminal 2, the only airport lounge in that terminal, while waiting for the flight (review of the lounge to come in a separate post). 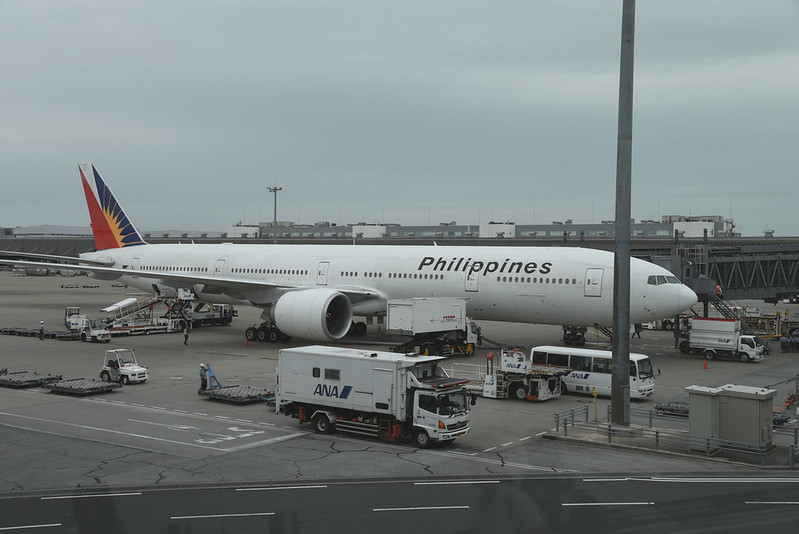 As fate would have it, the aircraft being utilized for my flight that morning to Haneda was RP-C7777. This is the very first B777-300ER that Philippine Airlines got and was delivered back in 2009. I still remembered the excitement within the Filipino aviation community when this plane was delivered. It was supposed to be used for the airlines’ expansion into the United States which at that time was hindered by sanctions within the American regulatory body. The US sanctions were lifted only a couple of years later so these 777-300ER’s initially served some Australian routes and even Hong Kong. Today, these birds are serving its originally purpose – mainly for flights to San Francisco, Los Angeles, Vancouver, New York and some Asian destinations such as Tokyo. 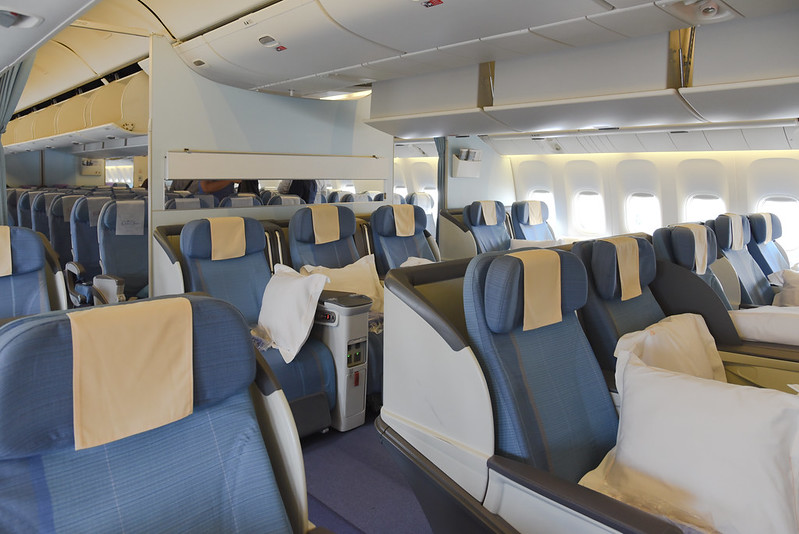 Business Class in the 777-300ER consists of 42 seats within two cabins and a 2-3-2 configuration. There are 28 seats in the forward cabin and 14 seats in the rear. I personally prefer the intimacy of smaller cabins and chose 6H in the rear Business Class cabin as my seat for the flight. Upon seeing my boarding pass, the crew realized that I was the only passenger in the mini cabin that day. A few crew members came by and encouraged me to change my seat to an empty one in the main Business Class cabin. I didn’t budge. 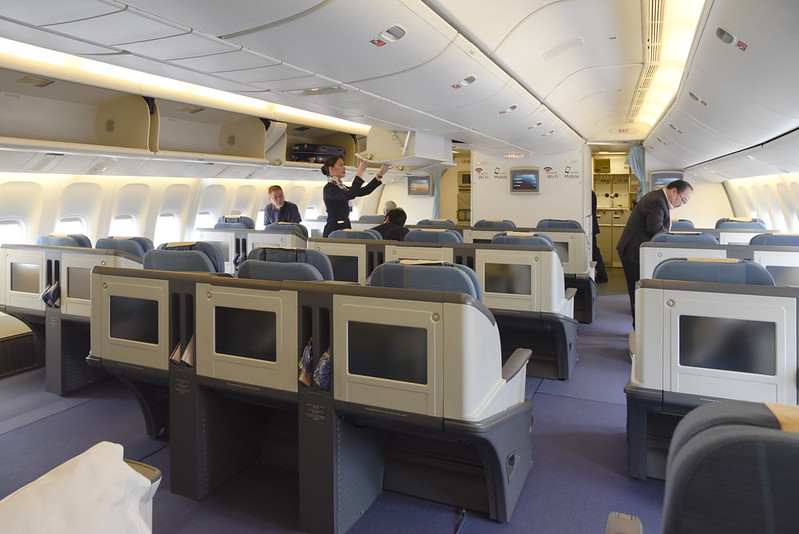 The Business Class seats have a seat pitch of 78 inches, width of 20 inches and recline of 165 degrees which is not too shabby. The layout of the seats vis-a-vis the screen reminds me a bit of Turkish Airlines‘ B777-300ER except that the latter has true flat-bed seats plus a couple more storage space. 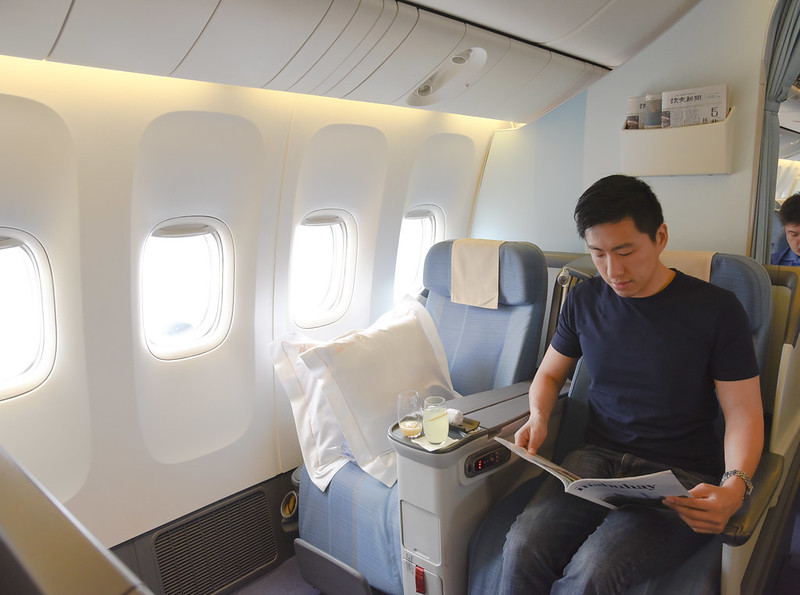 my seat for the flight 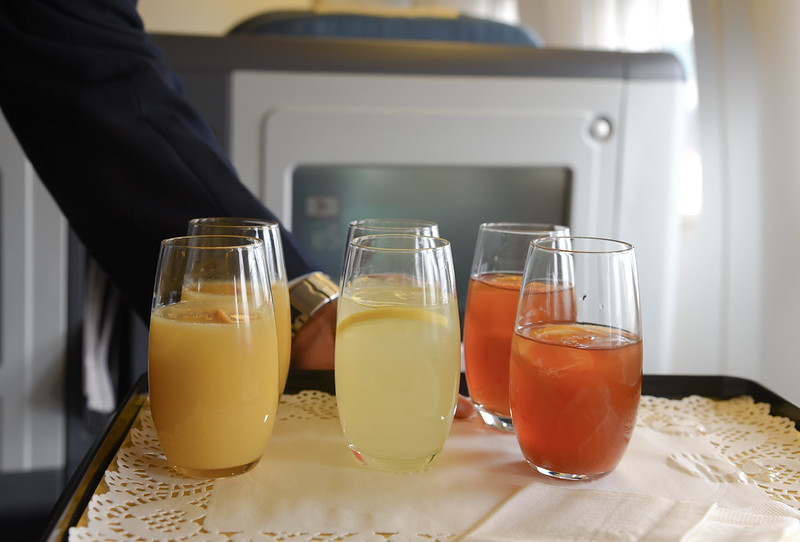 I was offered welcome drinks upon taking my seat, a selection of fresh orange juice and lemonade. I was a bit disappointed they didn’t have the mango smoothie, my all-time favorite drink on a plane which I remembered from their past flights. Seeing that I was alone in the mini-cabin, the crew member suggested I help myself to two glasses of the welcome drink to which I gladly obliged. 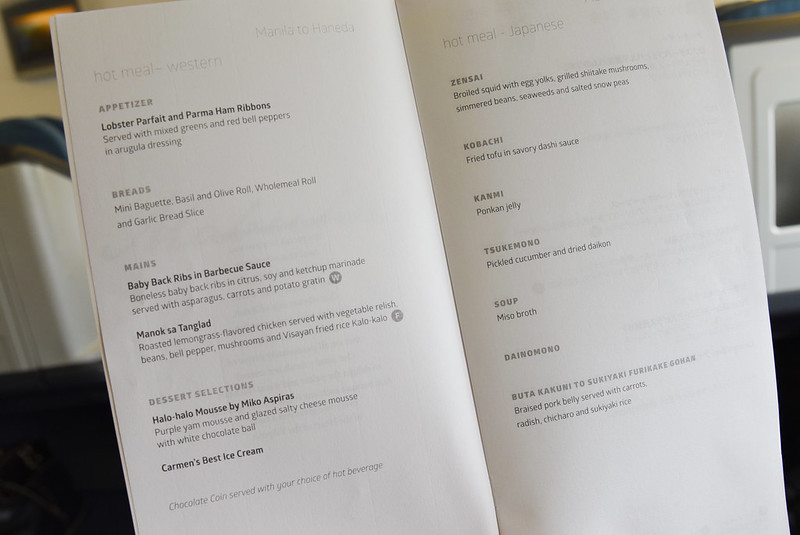 Afterwards, another flight attendant came by to hand me the menu. I know that Philippine Airlines serves Japanese food for its flights to and from Japan and I was looking forward to try that. 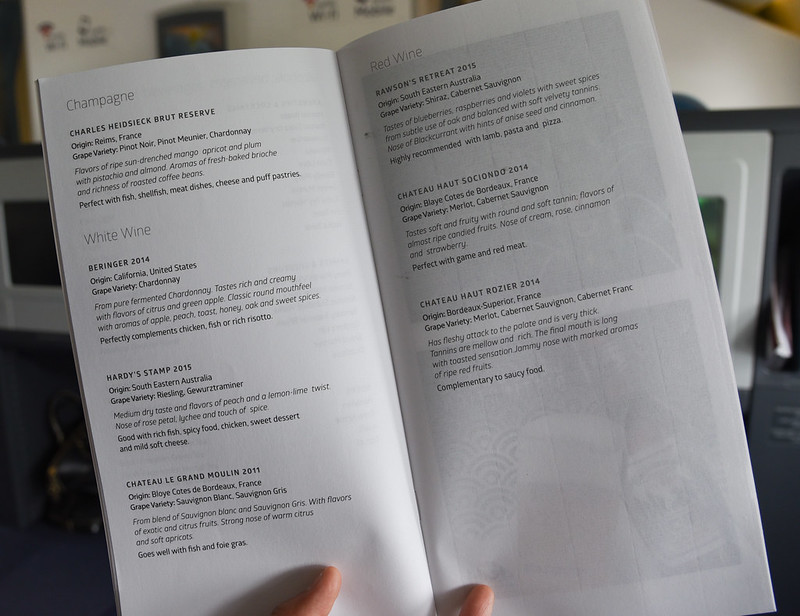 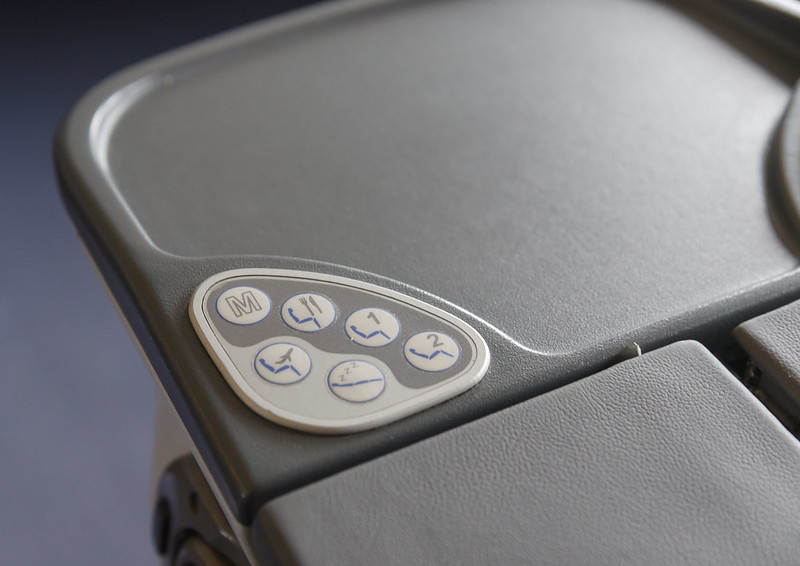 Seat controls were pretty easy to figure out and under the center armrest there is a flap which can be opened to reveal power outlets as well as USB ports. 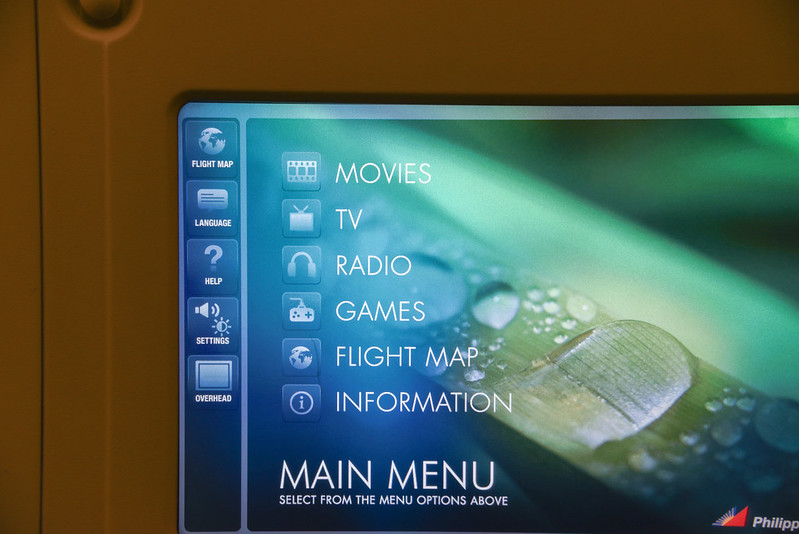 As of this writing, the Boeing 777-300ER is the only aircraft type of Philippine Airlines that comes with personal entertainment screens (even in Economy Class). PAL had embarked on a semi-budget carrier binge in the early 2010’s and some of the newer aircraft like the A321 or even the A330’s that were acquired earlier in the decade don’t come with any personal entertainment screens even in Business Class and they’ve resorted to a mobile-oriented entertainment system transmitted over Wifi instead. But I digress. 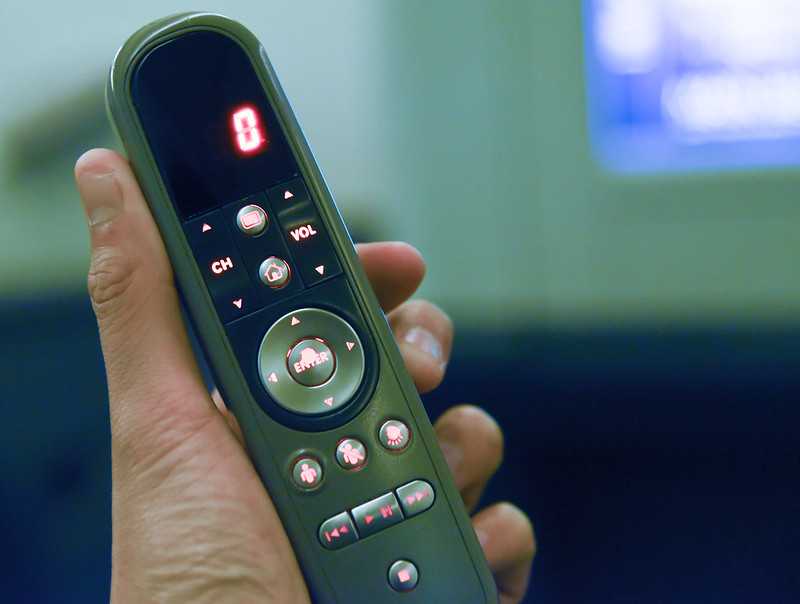 In the 777-300ER, you can switch channels and programmes by using the controller or by using the touchscreen. The controller in my seat didn’t work unfortunately so I had to use the touchscreen which wasn’t a big deal. While you won’t expect thousands of programmes to choose from, the entertainment selection was pretty decent with dozens of new releases as well as an eclectic song library.

Shortly after the plane took off, the crew started serving the meals. I chose the Japanese set and my lunch came in three courses. 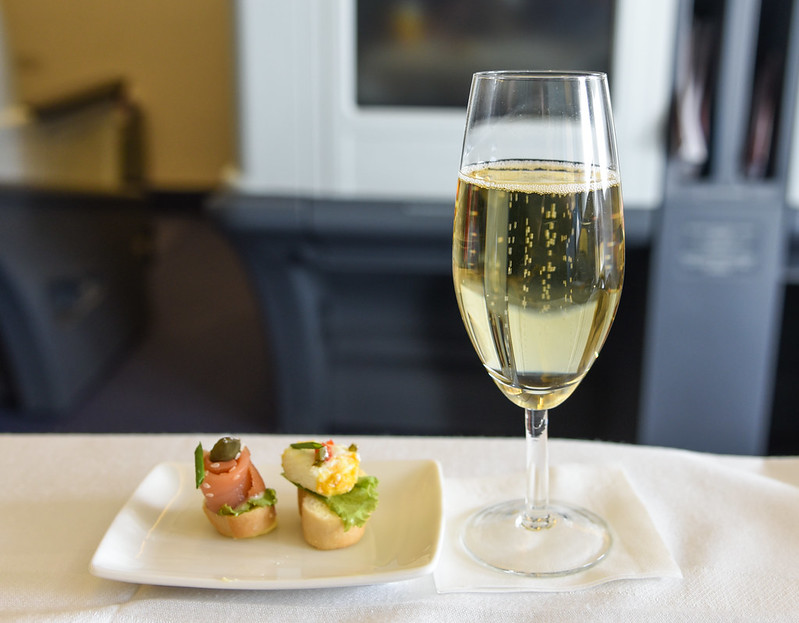 First was a canape which is integrated with the Western meal option. It’s not particularly Japanese looking but hey, I’m not complaining. 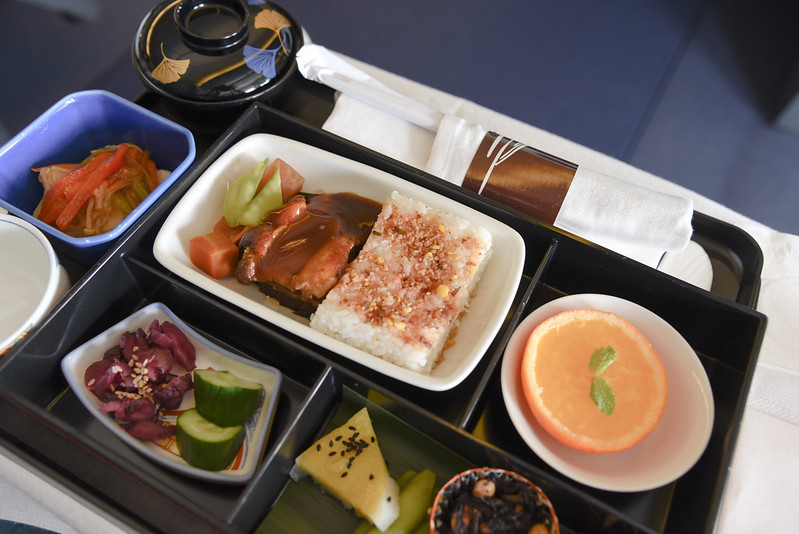 Next came a bento box served to me with a variety of Japanese appetizers and dessert surrounding the main – Braised pork belly served with radish, carrots, chicharo and sukiyaki rice. Needless to say, it was delicious. One thing I have always loved about Philippine Airlines is the food which is good regardless of class. 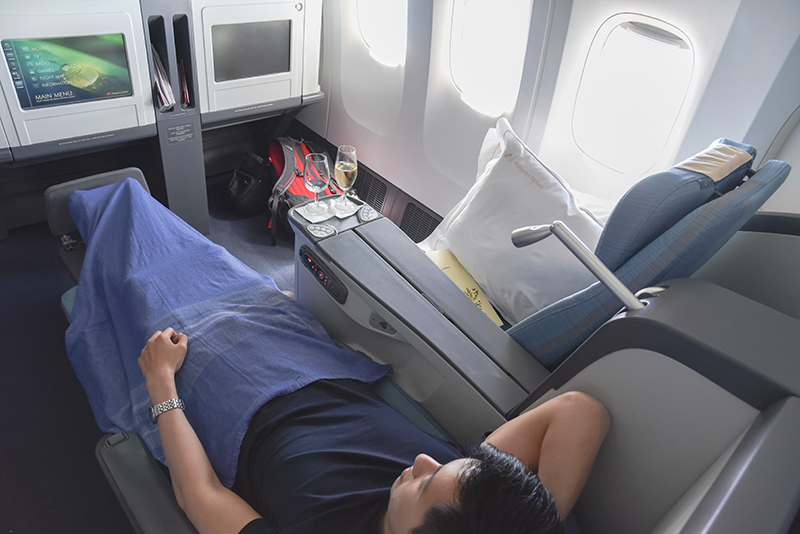 After lunch, it was time to  use the oversized pillows and get some shut-eye. As mentioned previously, the seats are angle-flat and I set it out for the full recline. For a day time flight, the angle-flat seat was quite comfortable though I imagine the recline could require one to be of a certain minimum height in order not to keep slipping to the lower areas of the seat. If there’s any complaint, I wish they had better blankets though. I notice they use the same kind for both Business and Economy Class. 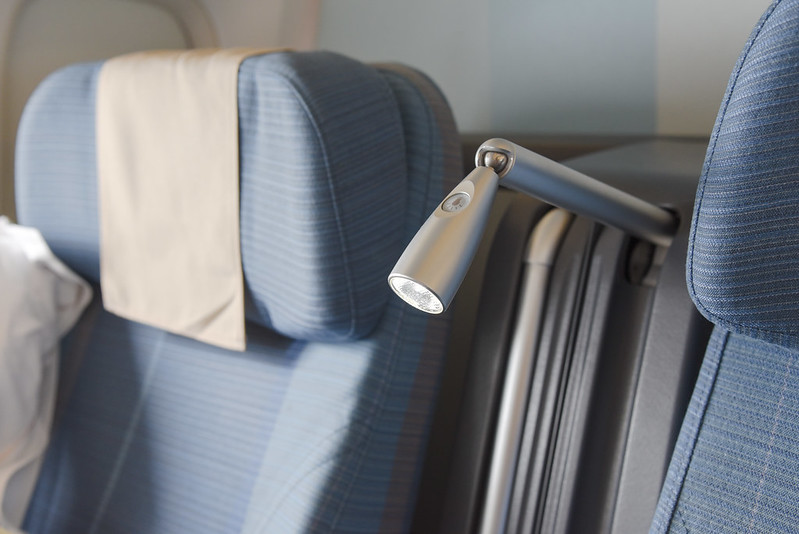 I woke up a few minutes before the pilot made the announcement that the plane was going to land. I flipped through my phone and found Wifi to be available during this flight. Philippine Airlines offers 15mb of internet for free. Beyond that, it’s chargeable in terms of data usage. Speed was not particularly fast but it was sufficient to check out some websites and even the occasional Instagram feed.

Also check out my review of Philippine Airlines A330 Business Class

Overall, I was pretty satisfied with the Business Class product on Philippine Airlines’ Boeing 777-3ooER. Food was excellent without the need to show over-the-top ingredients. Service was great and genuine. The seats are average but sufficient for a mid-priced premium product. While this is still Philippine Airlines’ flagship Business Class offering for now, I am excited to try one of the new A330s later in the year.