The Shangri-la Hotel Singapore can be thought of as the ultimate hotel because of its staggering 792 rooms and 3 varying propositions, from the business-friendly Tower Wing to the resort-like Garden Wing and the exclusive Valley Wing. I have stayed at the Shangri-la Hotel Singapore a couple of times and tend to think of the property as akin to a small community with its myriad of dining options as well as perpetually busy lobby.

Some weeks back, I had the opportunity to have a staycation at the hotel again, this time at the more opulent Valley Wing. Featuring a separate entrance and high-ceiling lobby which is iconic of Shangri-la hotels the world over, Shangri-la Hotel Singapore’s Valley Wing is carefully tucked behind the main portion of the hotel. 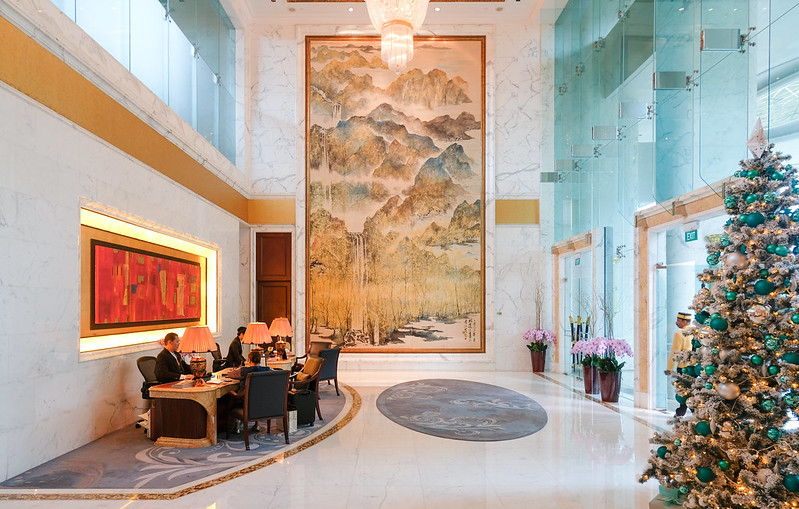 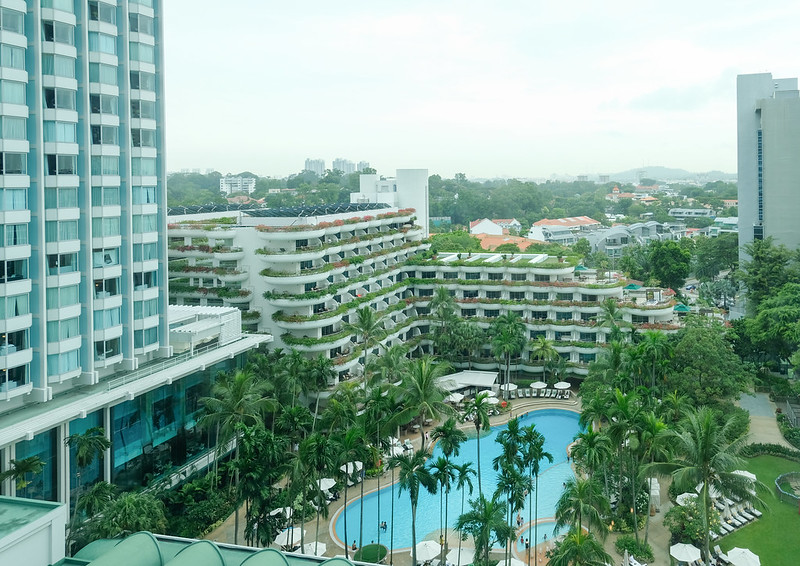 view of the pool area from the valley wing, shangri-la singapore

Many of those who come to Shangri-la Hotel Singapore usually go no further than the gigantic lobby – perhaps the grandest among hotel lobbies in the country – or perhaps the iconic The Line, known for having one of the longest buffet spreads in town. I first heard about the Valley Wing when former US President Obama stayed at its Presidential Suite when he visited Singapore. It again made headlines when President Donald Trump stayed at the same suite during his summit with North Korean leader Kim Jong Un. If it’s good enough for the American president, surely it’s worth checking out, right? 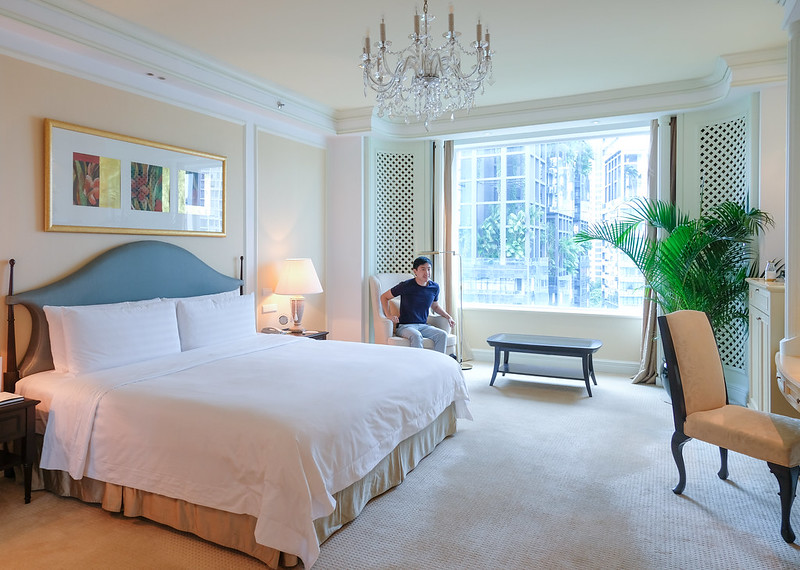 only one word to describe the room… plush

For this particular stay, I checked out the Valley Wing’s one bedroom suite. At 79 square meters, it was as plush as it could get. The suite essentially has two sides. The bedroom area is practically a duplicate of the Valley Wing’s entry level deluxe rooms and comes with a spacious sitting area of its own as well as a dressing area with folding doors. To top it off, a marvelous chandelier graced the ceiling, and gave the room a warm touch when lit. 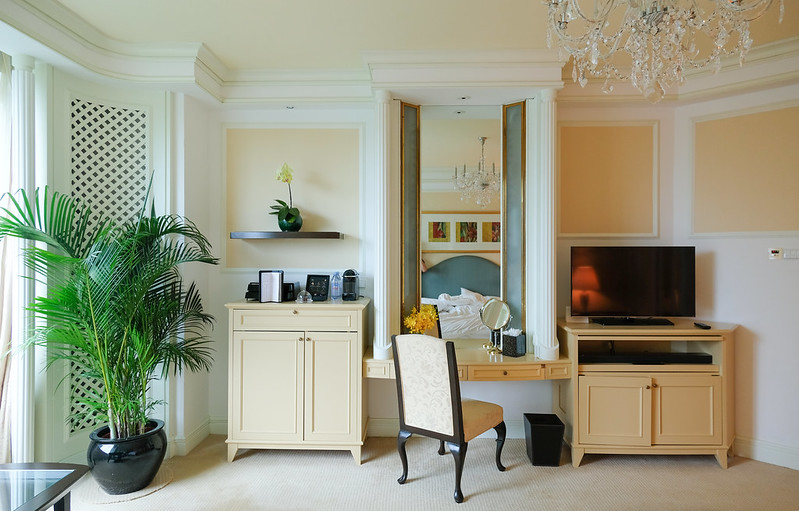 The room had a wide variety of amenities to keep one busy – from the magazines on display to the humongous flat-screen TV that came with dozens of channels – I was tempted to just stay-in the entire weekend! This part of the room measures 57 sqm in area. Regular guests get an extra perk via bathrobes and pillow cases with their initials engraved. But I was already more than satisfied with the extra large king-sized bed. It was as comfortable as it could get with its pure Egyptian cotton bed linen, and inclusion of many pillow types – including both hard and soft for discerning sleepers. 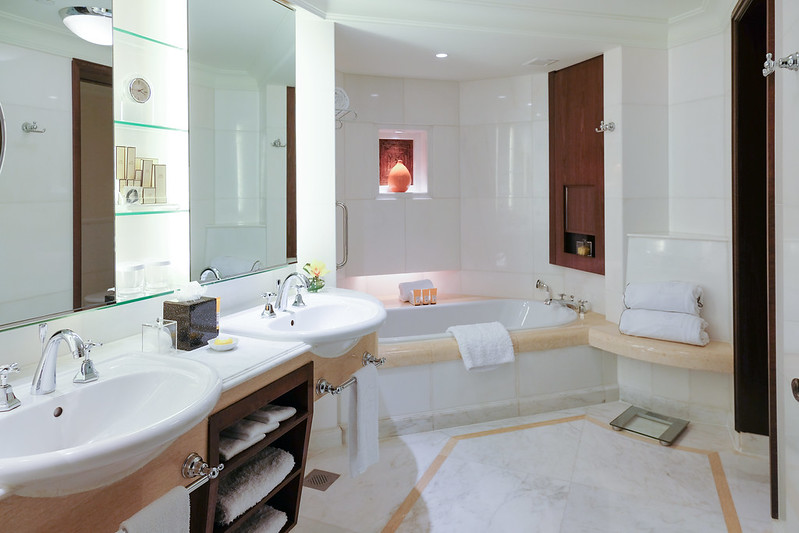 the equally plush bathroom in the valley wing 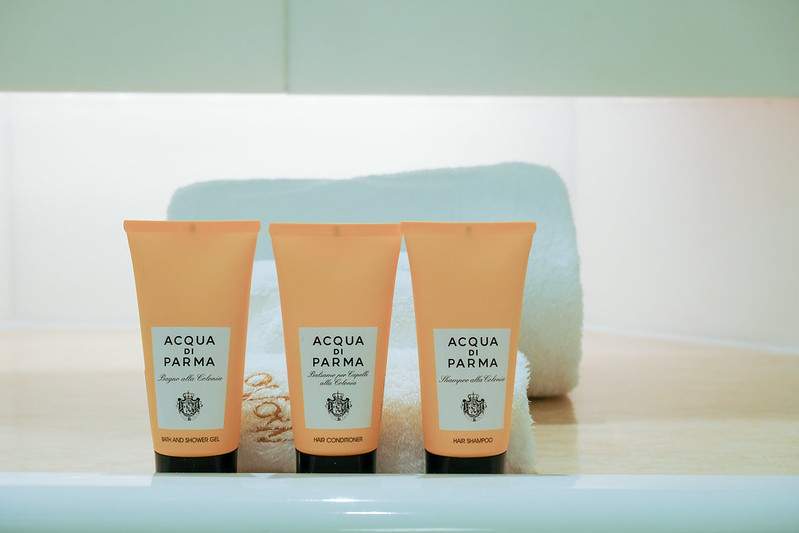 The bathroom was equally lavish, spacious and featured two sinks and a separate bath and shower area. The toiletries were from Acqua di Parma (an Italian brand) which the hotel had no problem providing generously (there was a second set placed in the shower area). A small TV was perched just beside the bathtub, convenient for those who want to take it slow with their baths. Towels of many sizes were decked copiously below the sink and in the towel racks – a thoughtful touch if I may say so. 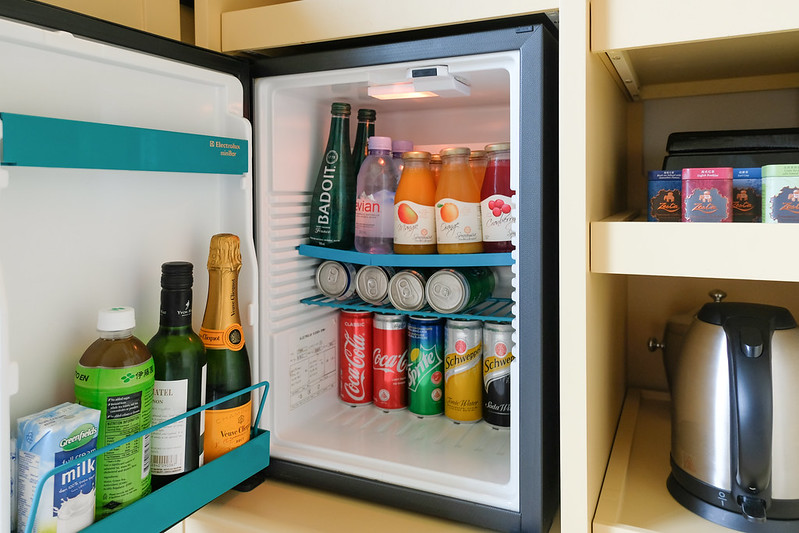 everything in the minibar (except the alcoholic items) is free

During check-in, I was politely told that all non-alcoholic drinks in the fridge were free. This included the fine selection of juices, canned soft drinks, water, iced coffee and even energy drinks, which were replenished daily. Needless to say, I was bowled over! Being a heavy juice drinker, this added touch certainly had a personal appeal. For caffeine lovers, the Nespresso machine here comes with 3 coffee capsules of varying intensity. For a list of other hotels in Singapore with free mini bar, you can check here. 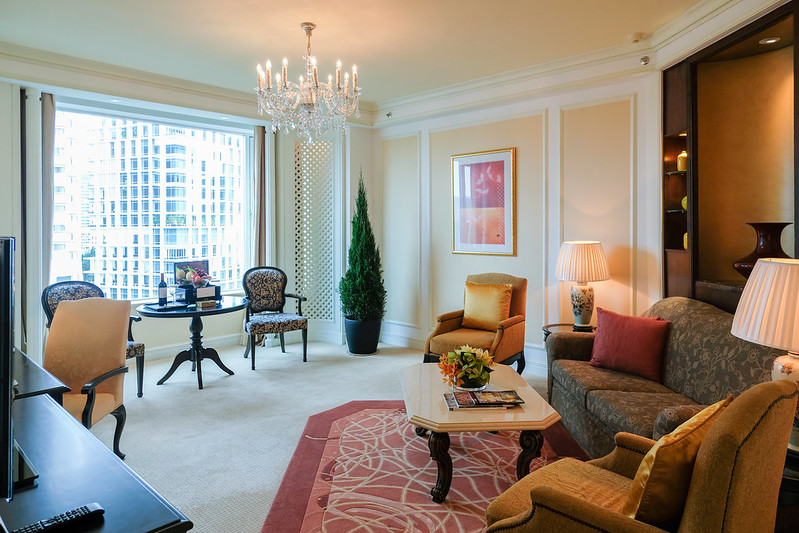 living area of the one bedroom suite, shangri-la singapore

The extra 22 sqm of space that one gets with the one bedroom suite goes into the living area which is filled with plenty of seating options – from a work desk to a full fledge sofa set. There is another TV here (which takes the total TV count of the suite to 3) as well as another minibar – the non-alcoholic contents of it being likewise complimentary.

As with my previous stays in Shangri-la hotels around the world, I found my slippers laid neatly beside the bed and a bottle of water handily by the bedside table when I returned in the evening. There was of course, one of the iconic bookmarks featuring a passage from James Hilton’s Lost Horizon placed on the bed. By the way, if you haven’t read this novel, I heavily recommend it. It is one of the great travel novels that will fill you with a strong sense of wanderlust by the end. 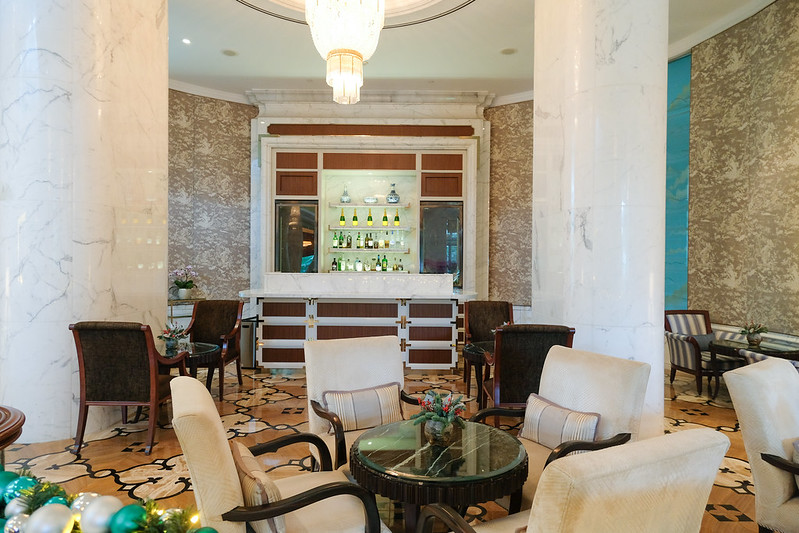 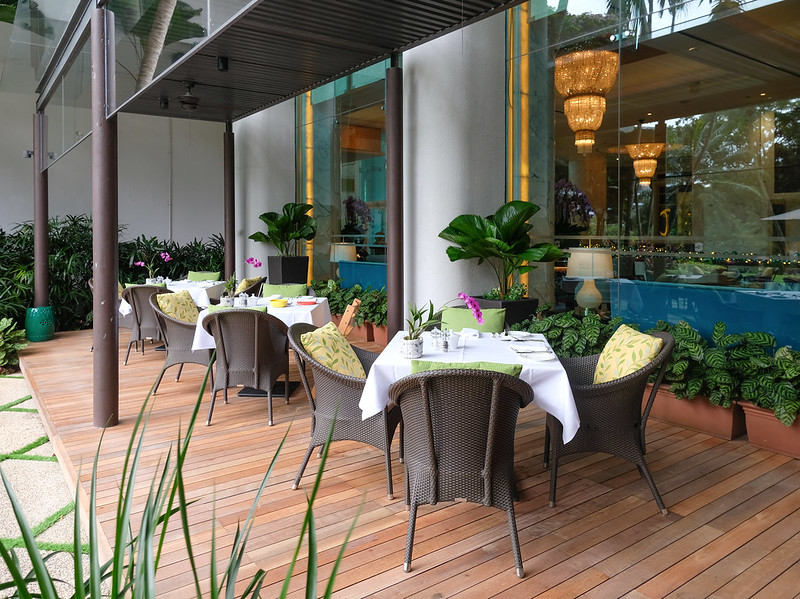 As a part of every stay at the valley wing, complimentary F&B options were available throughout the day. At around 2PM came high tea which is served by the lobby. A selection of fine cakes and sandwiches were served to us in the English style with dual-tiered plates. It was a relief to know that they had a wide variety of Asian teas available. The staff was most helpful and knowledgeable in pointing out the nuances of the various teas for us and I loved how they knelt when delivering the food to guests. 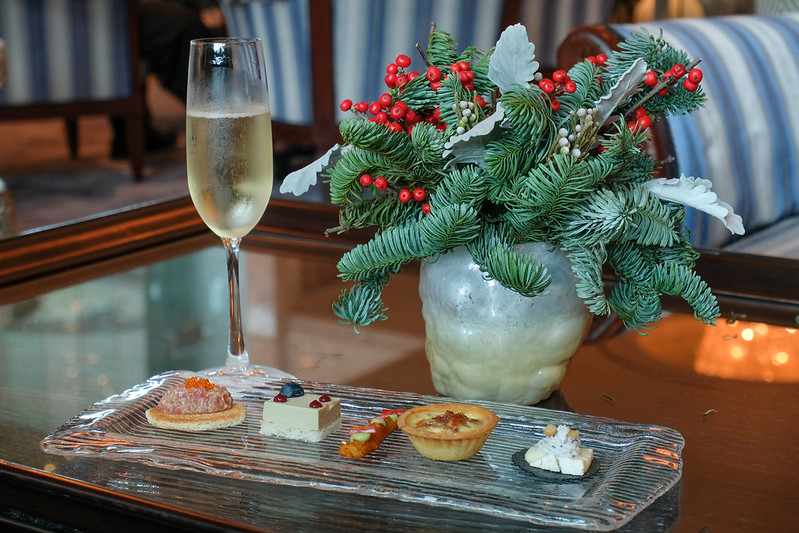 At around 5PM, the high tea gave way to cocktail hour, where a fine selection of canapes were made available on a made-to-order basis. It differs from the presentation style in the past when the canapes were part of a mini buffet spread in the Summit Room. If any consolation, it’s still possible to order seconds! 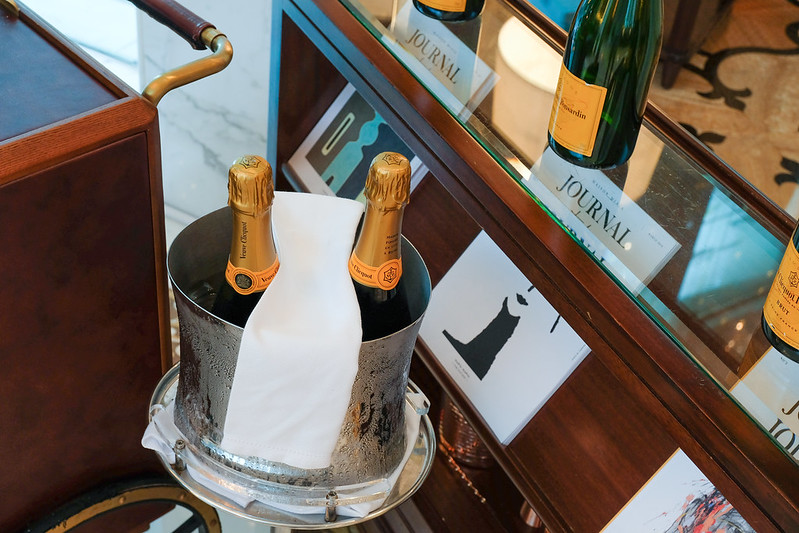 free-flow champagne throughout the day

One of the defining features of Valley Wing stays is the free-flow champagne which comes from Veuve Clicquot. Guests don’t necessarily have to wait for evening cocktails to have a glass. It’s available throughout the day, except during the wee hours of the morning.

Breakfast at the Summit Room 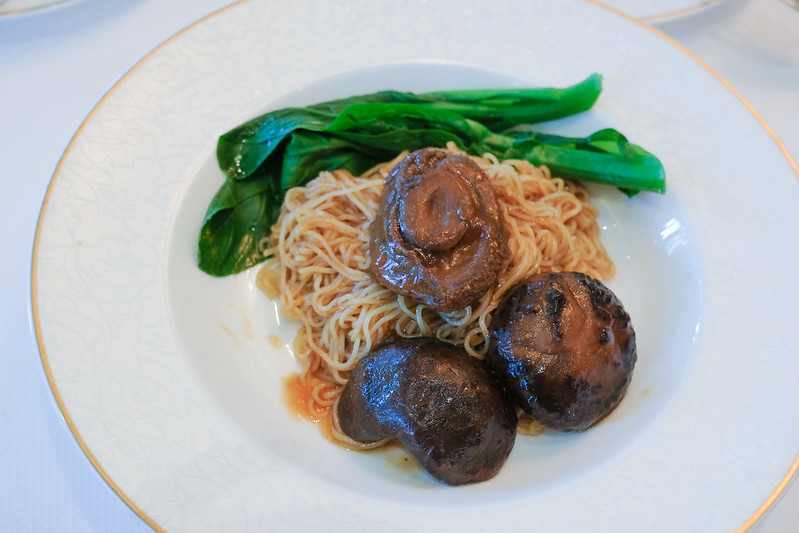 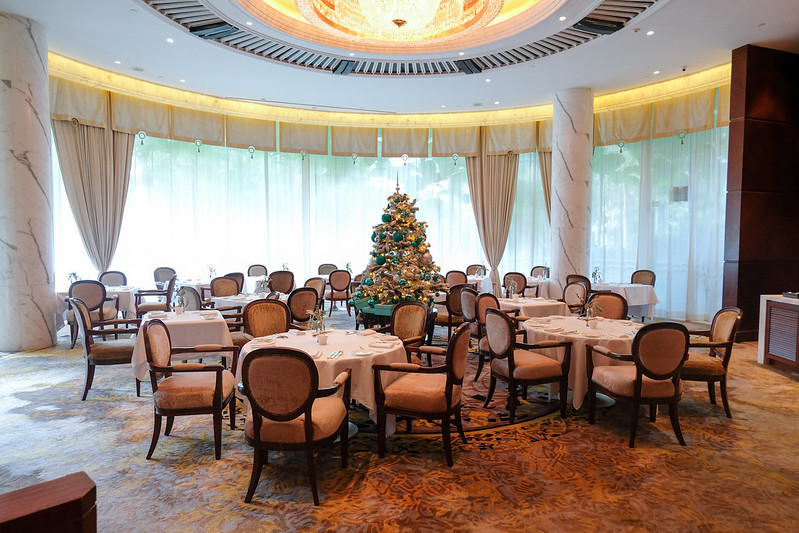 summit room of the valley wing at shangri-la singapore

For breakfast, guests have the option of eating at three places – The Line, at the Horizon Club Lounge or at the Summit Room. This being the Valley Wing, I tried the latter. While the sheer amount of food at The Line was certainly enough to dazzle any picky eater, I still preferred eating at the Summit Room. The food here is carefully – and thoughtfully – prepared. The staff had a knack for anticipating guest needs. While there is a small buffet spread consisting of pastries and fruits, the star is the ala carte menu which feature premium items such as a Japanese bento breakfast and even abalone noodles!

The Valley Wing is Shangri-la Hotel Singapore’s answer to luxury, a word which the hotel chain is practically synonymous for. Its interpretation of luxury is simply majestic and uninhibited, whereas the Garden Wing is more understated and Tower Wing is more corporate. Add to this the brand’s reliability in terms of service and strong food and beverage products and it makes for one of the most competitive upmarket offerings in Singapore. While the target market of the Valley Wing consist mostly of the industry bigwigs, diplomats and high level government officials, ironically this is probably the most conducive wing for a staycation in Shangri-la Hotel Singapore. The room and stay inclusions such as complimentary daily afternoon tea and cocktails were just fantastic – you’ll have absolutely no reason to leave the confines of the hotel during the entire stay. More than 40 years on and this property is still one of the best options in the country.

There is currently a staycation promotion at the Valley Wing of the Shangri-la Singapore for S$400 net for a one night stay at a Valley Wing Deluxe Room (bigger floor space of 50sqm) and breakfast at The Line but without the rest of the Valley Wing benefits such as all-day champagne or afternoon tea. You can also use your SingapoRediscovers vouchers here. You can book the special staycation deal here.