Considered to be an institution in the Singapore hotel scene with over 4 decades of experience in pampering leisure and business travelers, the Shangri-la Singapore is also considered to be the ultimate hotel in a way. I have been to this hotel several times in the past but didn’t realize until recently just how ginormous it is until once recent weekend. I was fortunate enough to be hosted by Shangri-la Singapore to experience their trademark hospitality through a staycation. To say it was impressive is an understatement! 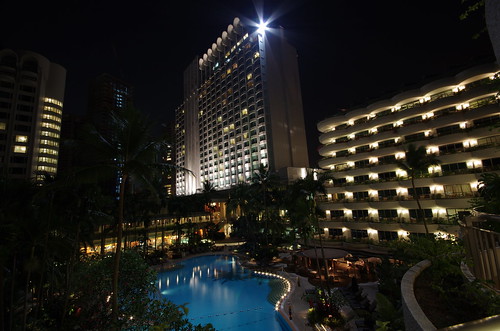 The hotel actually consists of 3 wings, with each being highly differentiated from the other, practically like a 3-in-1! The “flagship” tower is of course, the Tower Wing which houses over 400 rooms including Shangri-la’s well-known “horizon club” rooms with lounge privileges. A step up from that is the exclusive Valley Wing which suits discerning guests to a tee with its private entrance and rooms adorned with chandeliers. Over the years, the Valley Wing has been the hotel of choice of many heads of state whenever they are in town. The third wing is the Garden Wing, an urban resort concept that made me forget that I was in the middle of a bustling city! It was a smooth start to another staycation in Singapore. 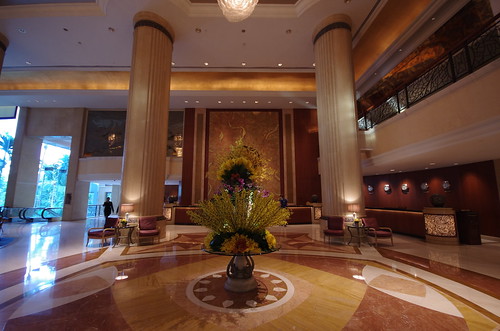 Although Shangri-la Singapore is essentially one hotel, the three wings are actually very well-differentiated. This was apparent right from the time I checked-in. The Garden Wing has its own check-in counter at the corner of the main building that mimics a resort. This is in contrast to the grand main lobby which is close by. My check-in was quick. I was served my welcome drinks while checking in and as I was making use of two rooms, reception was clever enough to give me a key that could access both rooms. They also reminded me about their free shuttle which runs hourly to the Orchard area and  back. 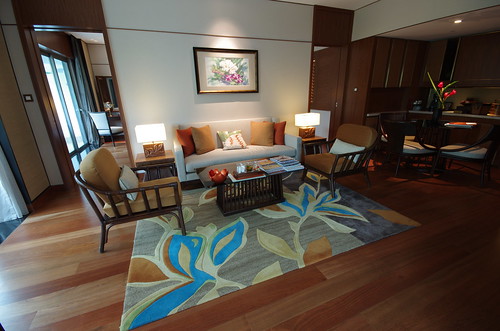 As I was being led to my room, I was impressed by all the differentiating touches of the Garden Wing. It does live up to its name with a massive tropical garden setup in the middle of the building. The actual room that I was checked in to was the Garden Balcony Premier Suite, a 131 sq meter manifestation to the ideal urban getaway. 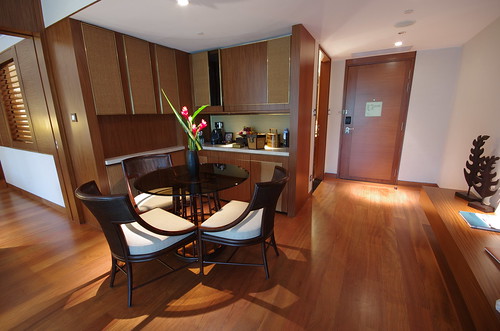 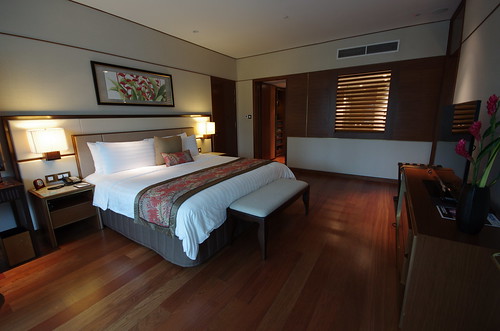 I was blown away with the suite. I knew that the Garden Wing was renovated and re-opened in 2012 but I did not expect the rooms to be so immaculate. The interiors of my suite actually mimicked a country home. The furnishings come mostly with earthly colors while floral motifs dominate the decors. The hotel really does its best to make one forget about being in a large city and my first impressions indicated to me that they were succeeding. 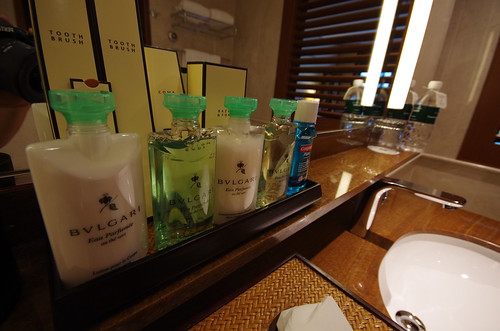 The bathroom was very spacious and came with a tub and separate shower area. Bulgari branded toiletries adorned the sink area which I thought was a nice departure from other hotels. Now I normally don’t write about the loo but the one in the suite was automatic Japanese style. Not only did it have a bidet, it performed all the flushing automatically as well! 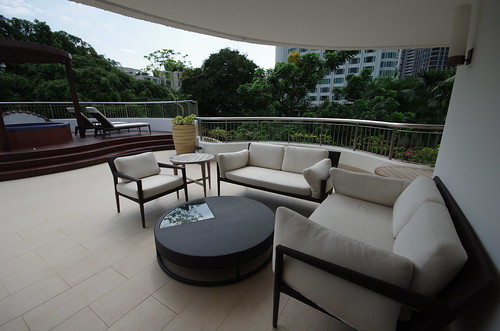 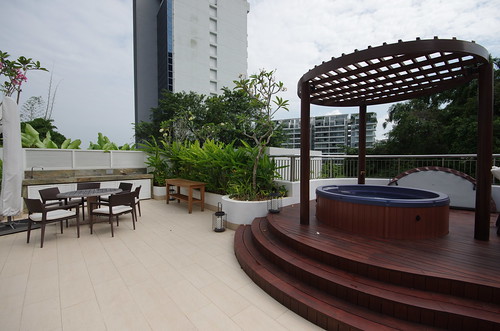 the balcony with the jacuzzi

But the highlight of the suite was of course the balcony! With one so prominent that it’s part of the name, my suite came with a humongous balcony that was probably as large (or even larger) than the living, dining and bedroom combined! The center piece of the balcony is an outdoor jacuzzi. Add to that a barbecue set (which it has) and it’s actually a possible venue for a private party. 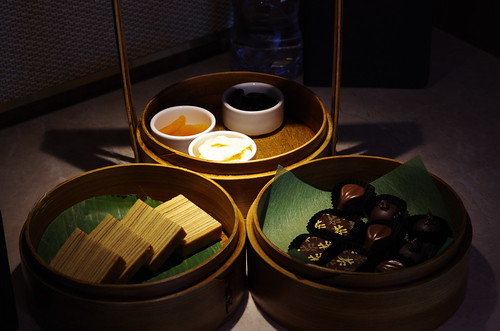 trays of goodies they left in my suite

The thing that I like about Shangri-la is that they really go out of their way to pamper their guests. When I arrived at my room, I found several extras. And when I say that, I’m not pertaining to just the fruit basket. There were trays of pastries and chocolates, a candy jar filled with my favorite gummy bears and a pot of freshly brewed tea. The thing about Shangri-la is that it is an Asian brand, and how they manifest their service also reflect Asian values. This is actually a good thing — the typical culture in Asia is for hosts to graciously offer visitors food. And of course, I am not one to decline.

I would probably call Shangri-la Singapore a super-hotel. With three different wings and about 700 rooms, the facilities are similarly catered to this large number of guests at any given time. Let’s start with the gym. One way I tend to evaluate hotels is by scrutinizing its gym. If that was my sole measure, Shangri-la would probably rank #1 for me. It has the largest hotel gym I’ve ever seen in Singapore! Given its size, it is already rivaling the gyms of some fitness chains in the country. 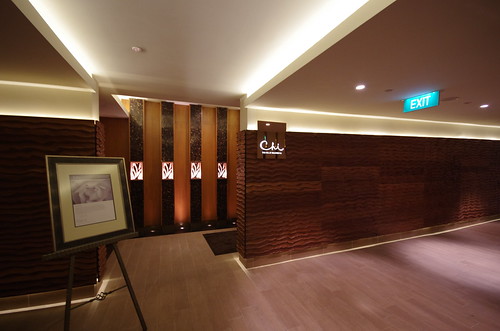 The hotel is also well-known for its signature Chi spa, which has already become a brand of its own. I was given a “Singapore Wave” massage during my stay, a combination of various schools of “massage.” I normally don’t go for massages but I would give a thumbs up to this one! They started me off with another welcome drink – lemongrass tea which was a calming drink. The massage was well-executed, leaving me with a soothing feeling by the end. I was deeply relaxed.

Then there are of course the lounges. Shangri-la boasts of not one but three lounges, one for each wing. The Garden Wing has complimentary snacks and drinks served from 5 to 7pm featuring a fine selection of alcoholic and non-alcoholic drinks plus a fine selection of their trademark canapes. 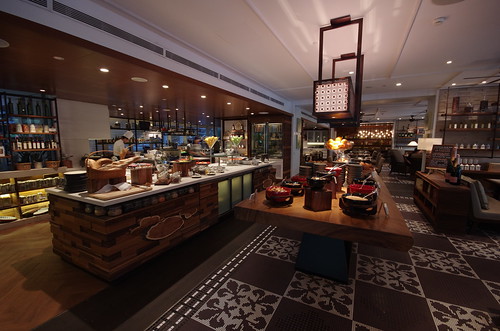 the cozy ambiance of the waterfall cafe 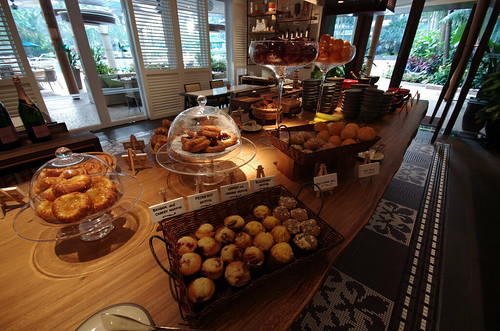 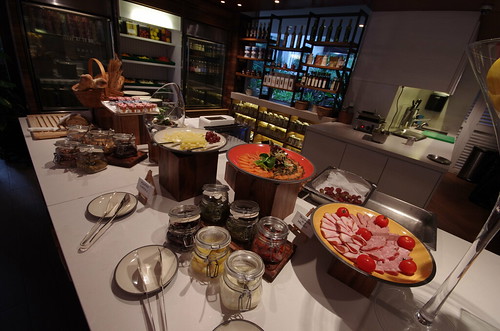 What I liked about Shangri-la’s breakfast selection, at least for those staying in the Garden Wing, is that the guest gets to have the choice between a legendary long breakfast buffet spread in the popular “The Line” or to have a brunch-style affair at Waterfall Cafe with less people but with just as good (if not even better) ambiance. Many people would probably instinctively think that a breakfast buffet would be the better choice. I tried both and while I liked the varied selection in the buffet, I was still more inclined with Waterfall Cafe. The breakfast concept here is more ala-carte style. While there is also a buffet spread here with pastries, cereals and fruits, the main dish is ordered off a menu. 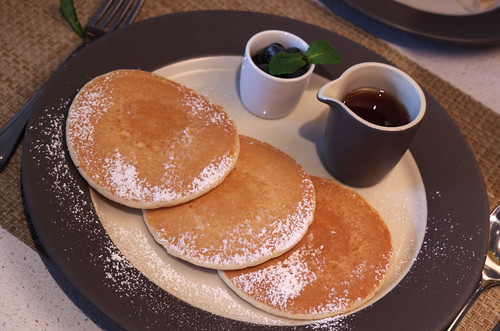 The selection in the menu are well-suited to those looking to have brunch. Items such as classic eggs benedict, salmon scrambled eggs and waffles immediately caught my eye but I decided to go for my perennial favorite – pancakes with blueberry compote, maple syrup and butter. I’ve been searching long and wide for decent pancakes in Singapore and often, the ones I get are too dry. What I like about the pancakes in Waterfall Cafe is the right amount of fluffiness in the dough. 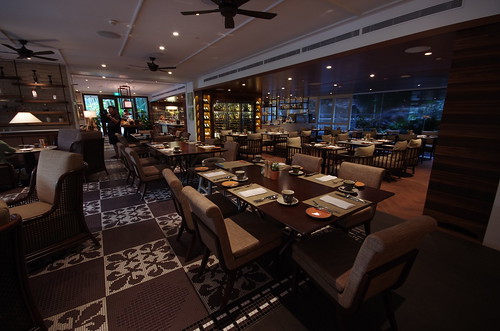 Aside from breakfast, I also had the opportunity to return to Waterfall Cafe for dinner. The restaurant has gotten a lot of positive buzz since it opened last year. They take the freshness of ingredients very seriously. In fact, some of the herbs used for cooking are plucked right from Shangri-la’s own herb garden. The meats also carry a similar proposition and most of those used are hormones and antibiotics-free. No surprise then that the place was packed when we arrived. We were handed the menu which is a one-pager but was quite extensive in terms of dishes. We had a hard time deciding what to order at first. Finally, the staff recommended the following to us: 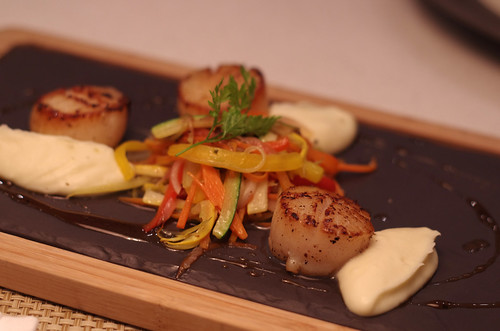 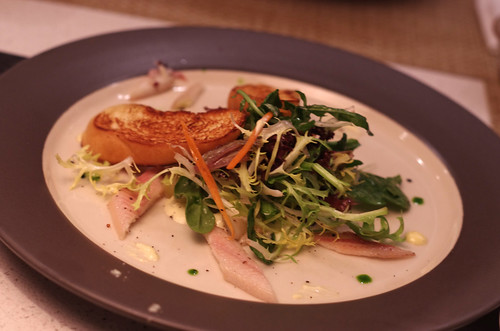 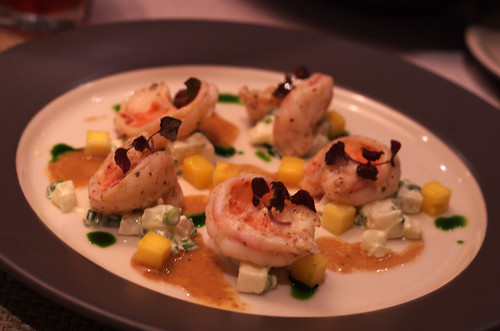 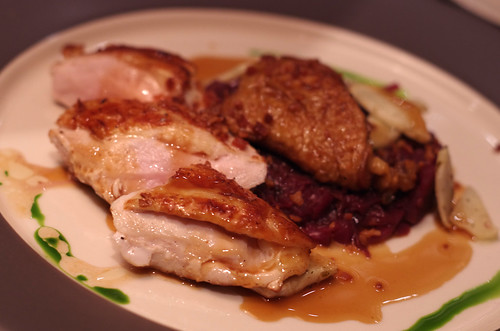 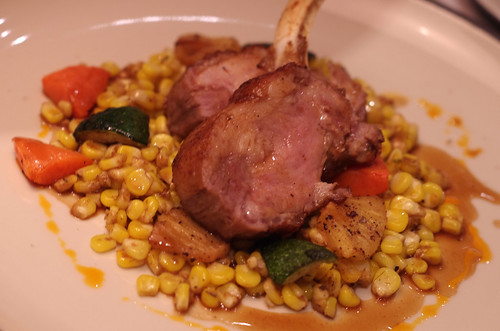 Quite simply, I would say that I would return to Waterfall Cafe next time even to eat on a personal basis. Yes, the food is that great. I will not go into detail by describing the texture or the taste or tenderness of the dishes one-by-one because they were all fantastic and a delight on the senses in their own way. But a special mention must be made however for the Iberico pork chop. If I had to order one and only one dish in Waterfall Cafe, it has to be this. The meat just exudes an unbelievable degree of tenderness that I didn’t even know was possible with pork. It’s really meant to be tasted to be believed!

Shangri-la delivered spectacularly and has trumped all other staycations in Singapore that we’ve had so far. At the end of the day, I suppose the key is not to concentrate on one aspect of the product but to ensure that everything – from the rooms to the food, service and facilities are delivered consistently and this was indeed my experience during my stay. Shangri-la has a propensity for delivering things in a grand fashion and this is evident right from the time one steps into the lobby. While the Garden Wing focuses more on the urban retreat concept, I found that Shangri-la still managed to bring about that luxury proposition which they are so well known for but in a more low-key manner (for those looking for unabashed luxury, the Valley Wing is a better choice). By the end of my stay, I was relaxed as could be and prepared to face another hectic week. Indeed, this was the best staycation ever!