Grand Hyatt Manila stands today as the tallest hotel in the Philippines, at a height of 318 meters and with sweeping views of the metropolis stretching as far east as Manila Bay. For a city that has seen a shortage of true luxury hotels for the longest time, the opening of Grand Hyatt Manila in early 2018 certainly marked a new chapter in the local hospitality scene. Aspects such as the gorgeous multi-tiered lobby, 60th floor rooftop bar as well as its multitude of F&B concepts have rendered the hotel as a new hotspot – even without considering what the property offers for accommodation. I have been curious about the property ever since I saw photos of its rooftop bar, The Peak, in social media sometime back. Finally, on a recent trip to Manila, I managed to check out the Grand Hyatt Manila through a hotel stay. 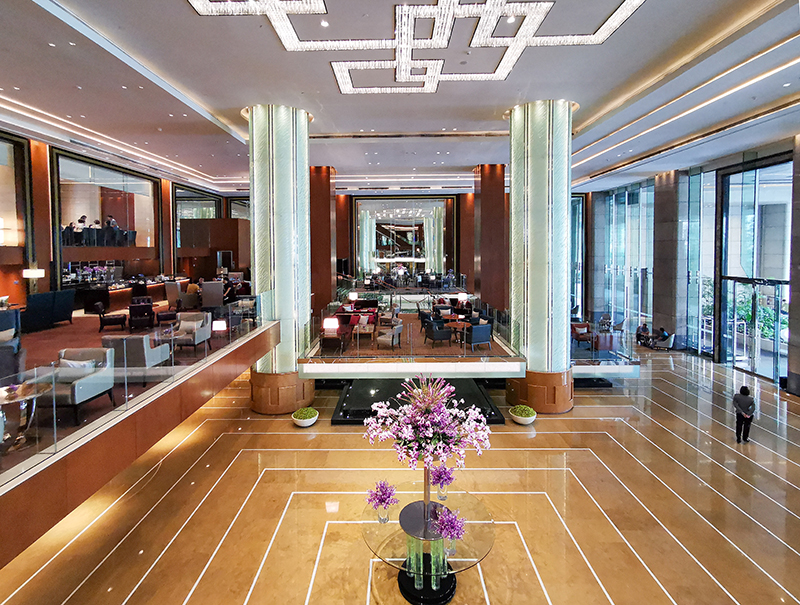 Arriving at Grand Hyatt Manila, one can’t help but notice the majestic lobby which seems to top any luxury hotel in Manila when it comes to its sheer size and ceiling height. A multi-tiered dining concept called The Lounge is situated on the upper reaches of the lobby, in a deliberate layering that is inspired from the Banaue Rice Terraces. Above it is The Grand Kitchen, the all-day dining restaurant as well as breakfast venue for the hotel. 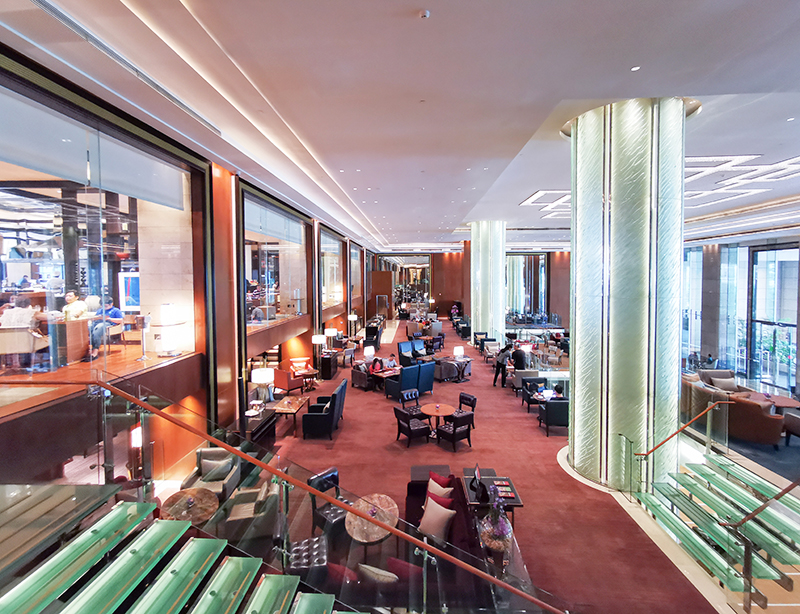 I approached the ground floor reception for check-in formalities but was directed to the 57th floor lounge for registration as my room came with club lounge access. 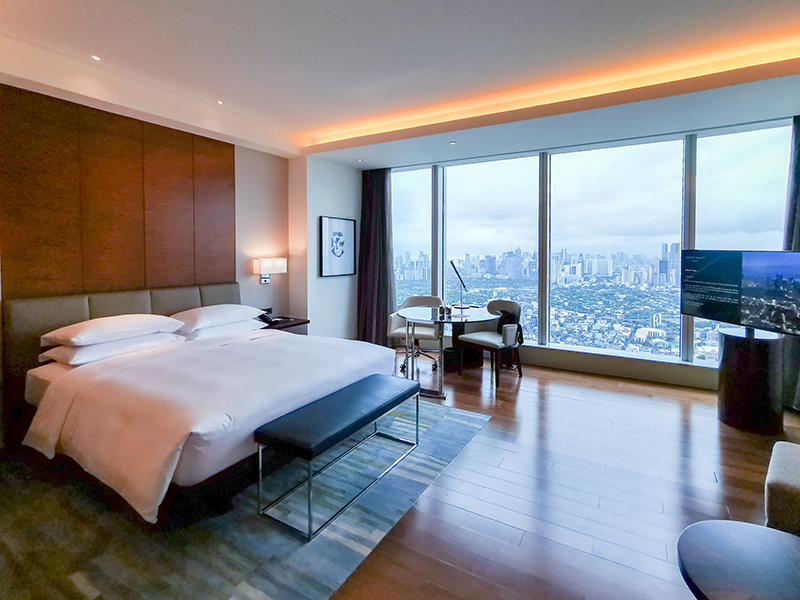 Grand Hyatt Manila has 461 rooms and suites. For this particular instance, I stayed in a Club Deluxe King which is around 50 square meters in size. The room is huge and the usage of mirrors makes the room seem even bigger than it already is. 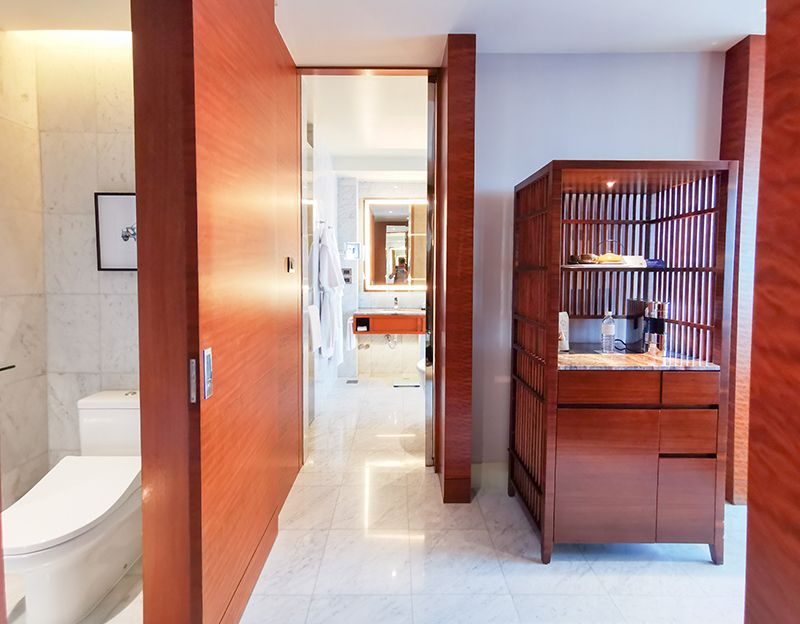 One of the defining features of the room, and for any room in Grand Hyatt Manila for that matter, is the presence of a walk-in wardrobe. I thought it was a nice feature. I do not often see it in lower room categories in other hotels and its presence only accentuates the size of the room. Folks entering the room also come in through a foyer that is set at an angle from the bed. This allows for extra privacy, just in case you have housekeeping accidentally barging in while you are in a compromised situation. 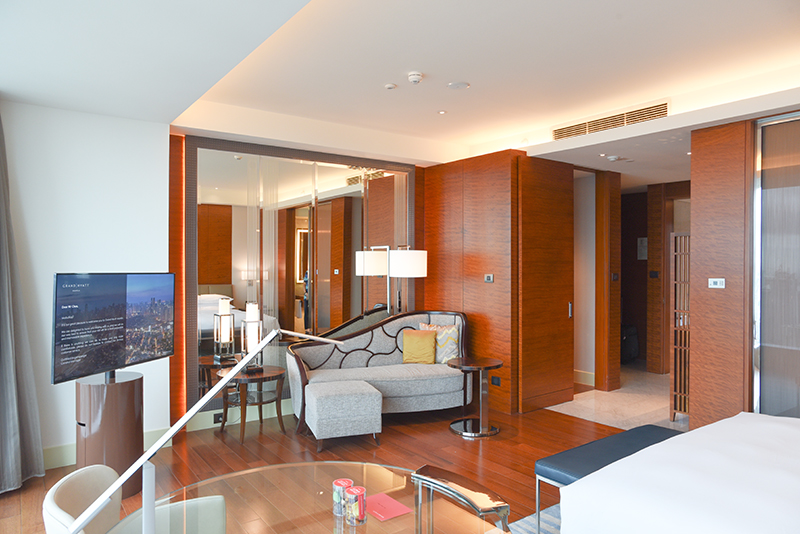 The room itself possesses an almost squarish layout, allowing for plenty of space between the bed and the TV. An ottoman is conveniently placed in front of the bed while plenty of other seating spaces – such as a sofa that is long enough to double as a day bed as well as a contemporary round work desk and two chairs by the window (a concept I have also seen in sister hotel, Andaz Singapore) complete the essential room furnishings.

Luxury hotels in Manila tend to be generous when it comes to free minibar items, often incorporating local snacks into the “welcome amenities.” In my case, I got two packs of banana chips. In other hotels such as Marriott Manila, I got dried mango candies. 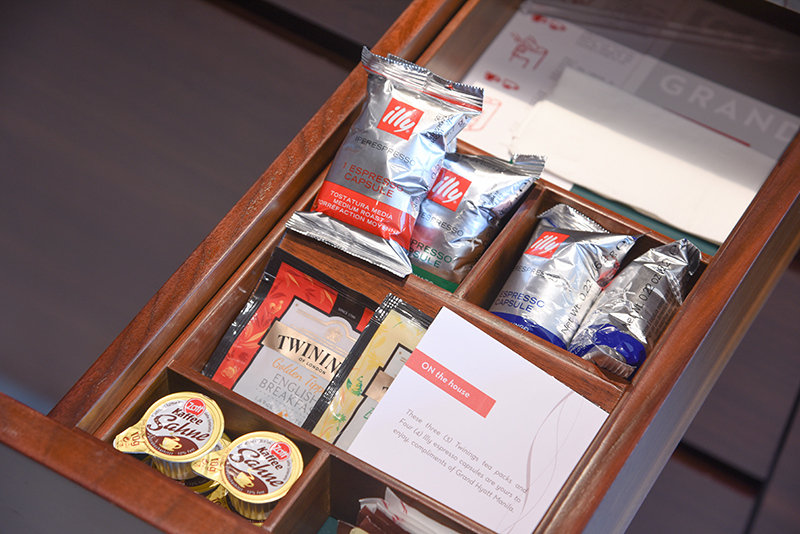 Coffee comes from Illy, with a machine to boot, while tea bags are from Twinings. If these beverages aren’t enough, there’s also the option of walking to the Grand Club Lounge which is just a few doors away. 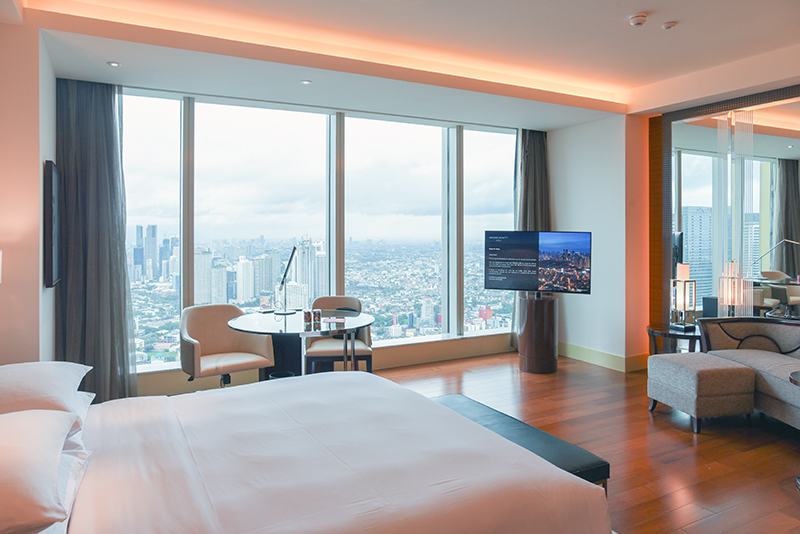 A squarish layout means that you get to have wider windows than the norm and coupled with floor-to-ceiling panels, the view is simply amazing. As mentioned previously, the Grand Hyatt Manila is the tallest building in the city and from my 57th floor room I could see as far out as Makati and even Manila Bay. 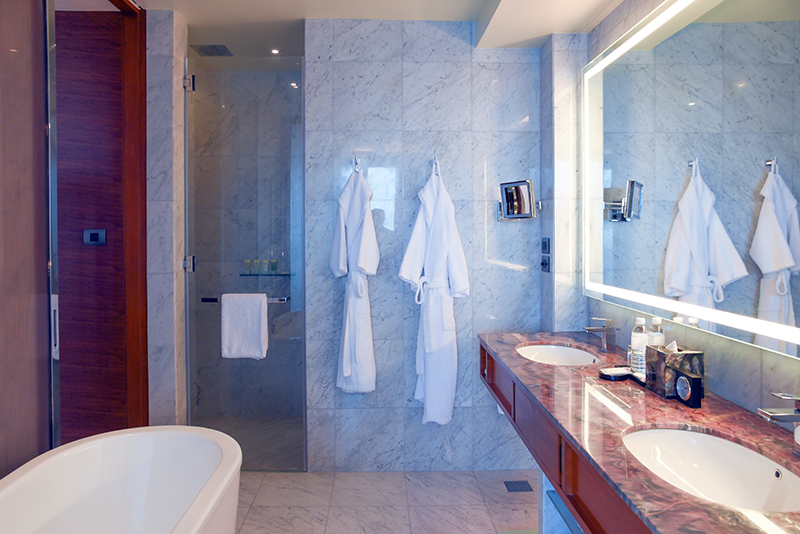 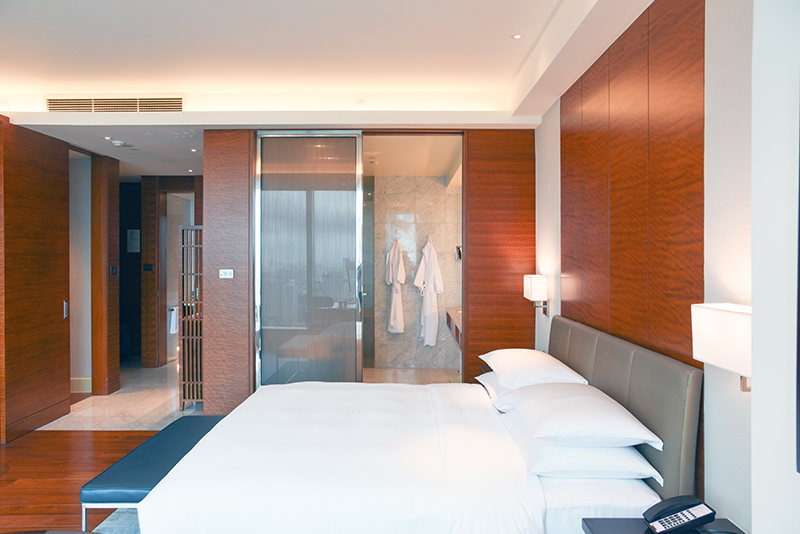 Two sliding doors separate the bedroom from the bath area. The sliding door concept means that parts of the bathroom can be integrated with the rest of the space, giving the impression of an even larger area. Guests can also shift the sliding door the other way in order to enjoy a nice hot bath with a view of the city. One thing to note about these sliding doors is that these are made of glass. Even though the glass is slightly frosted, one can still make out various shapes and contours when looking in from the bedroom, especially in the evenings. This can potentially create an awkward situation if you are staying with a friend. However, this is less of a problem in the day when the light from outside creates a mirror effect on these glass doors. 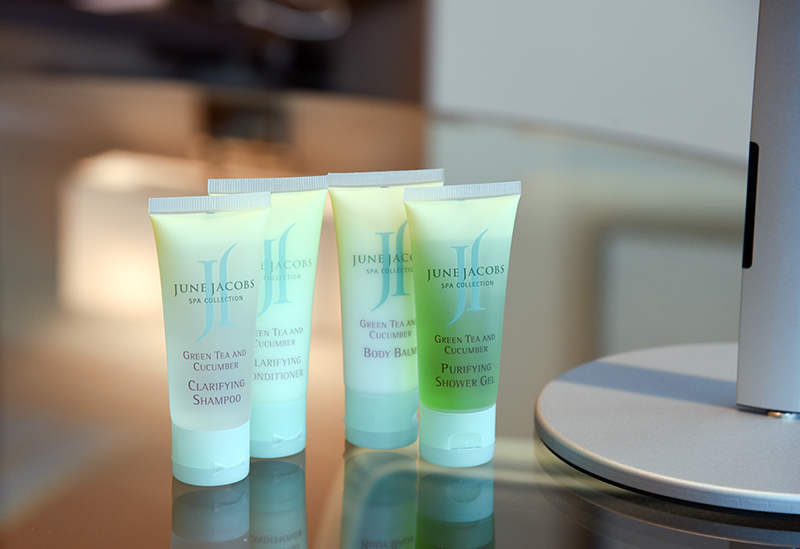 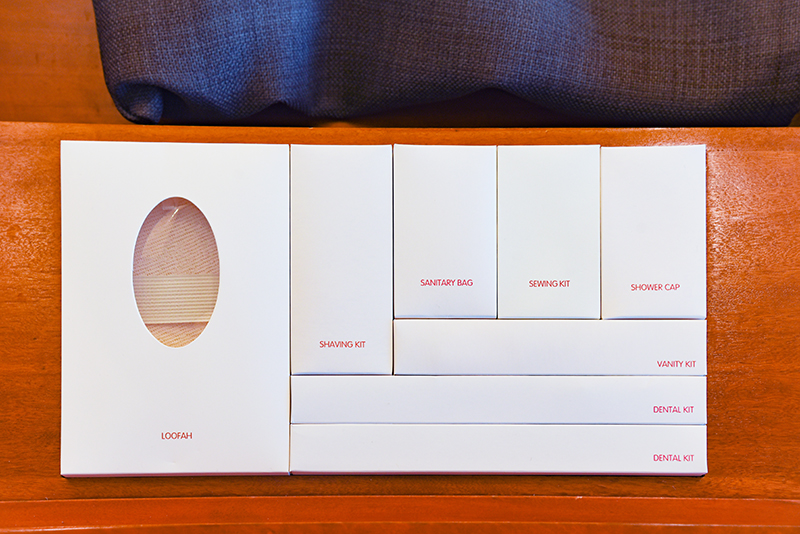 Similar to my experience at Grand Hyatt Singapore, toiletries here are from June Jacobs. I particularly like their cooling cucumber shampoo. I also noted how the complete set of toilet amenities were provided to me, in obsessive-compulsive fashion. Boxes containing shower caps, razors and toothbrushes were arranged neatly like a puzzle. 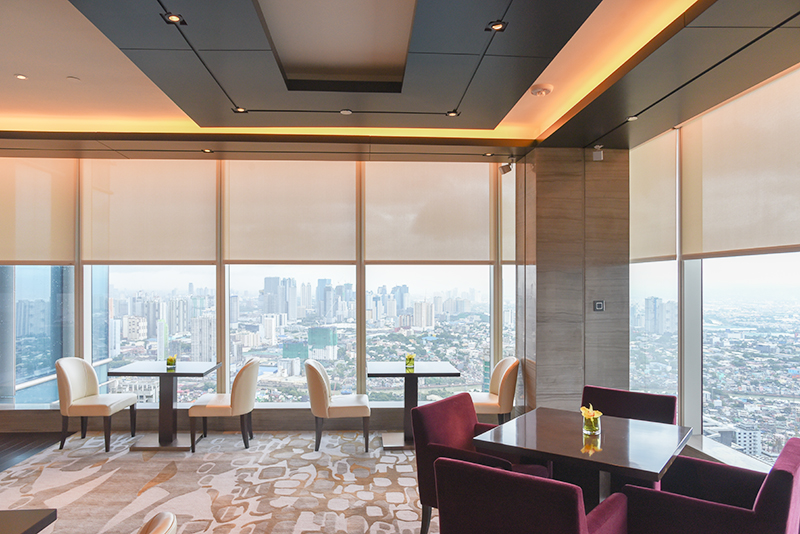 One of the highlights of my stay at Grand Hyatt Manila was the Grand Club Lounge. I have to give two thumbs up to the staff members there who were quick to recognize guests after having seen them only once. During my entire stay, I was only asked for my room number once and that was it. All subsequent visits began with the greeting – “Hi, Mr. Chua” regardless of who was manning the club lounge reception. 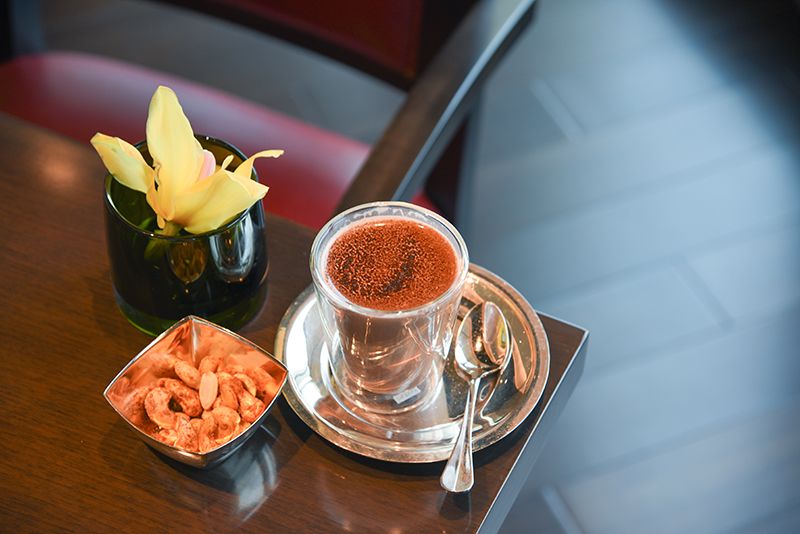 Good effort was made in getting my drinks and food orders. I had ordered a hot chocolate and the staff member, James, went beyond what the coffee machine churned out. He added real chocolate bits to my drink for an almost cafe quality finish. I learned only later that the hotel recruits relatively experienced people for the club lounge. Some of the folks there for instance, worked in luxury hotels overseas before coming back to Manila.

Tip: When at Grand Hyatt Manila’s Grand Club Lounge, make sure to try the Florentine cookies (they come from the hotel bakery downstairs). I had some and they were delicious! 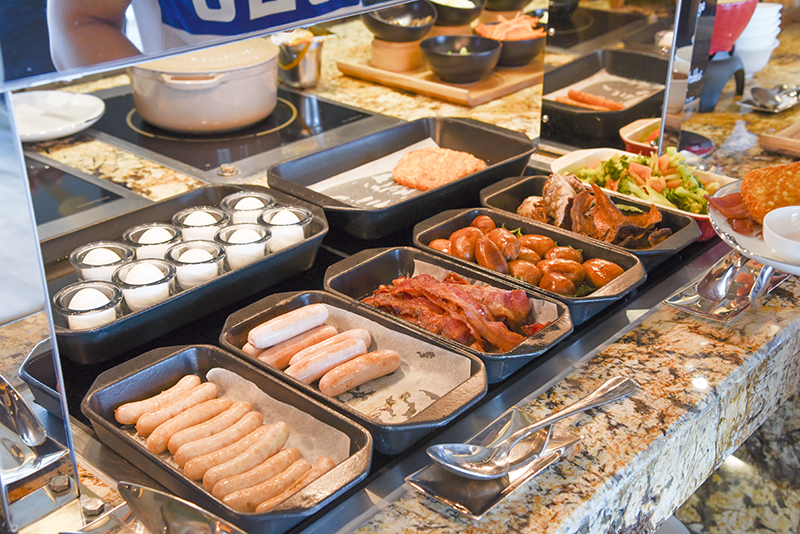 Lounge benefits are relatively straightforward, with all-day refreshments, breakfast in the mornings and cocktail hour from 6PM to 8PM daily. Like other Hyatt properties, booking a club access room does not automatically guarantee breakfast access at the all-day dining restaurant. Club guests can opt for it at an additional Php 1,000++ per person. Otherwise, the breakfast in the club lounge is perfectly fine. 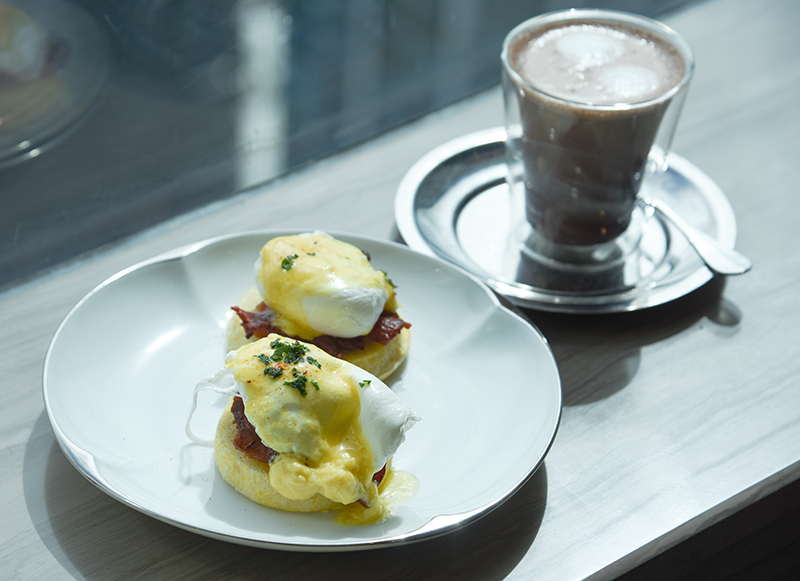 eggs benedict from the club lounge

Morning meals at the club lounge are reasonably more understated compared to downstairs but you do get all the essential breakfast food there such as porridge, sausages, bacon, eggs, pastries and fruit. One test that I often do when staying in a hotel is to see if they can prepare eggs benedict even though it is an off menu item. Grand Hyatt Manila’s club lounge had no difficulties preparing a set for me when I ordered for one.

Dining – Check Out The Peak 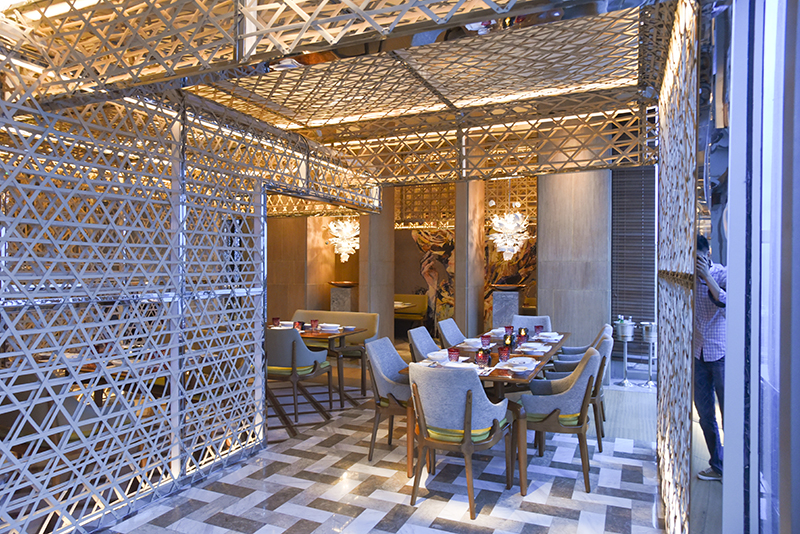 I have to admit that rarely has a hotel’s food and beverage concept been a decision factor but for the case of the Grand Hyatt Manila, it was actually their rooftop bar / restaurant that caused me to pay attention. The Peak is undoubtedly the crowning jewel of the hotel’s numerous dining concepts with its snazzy decor and sumptuous views. One of my main goals for this stay was to catch the sunset from the bar but it was drizzling almost the entire time I was there. 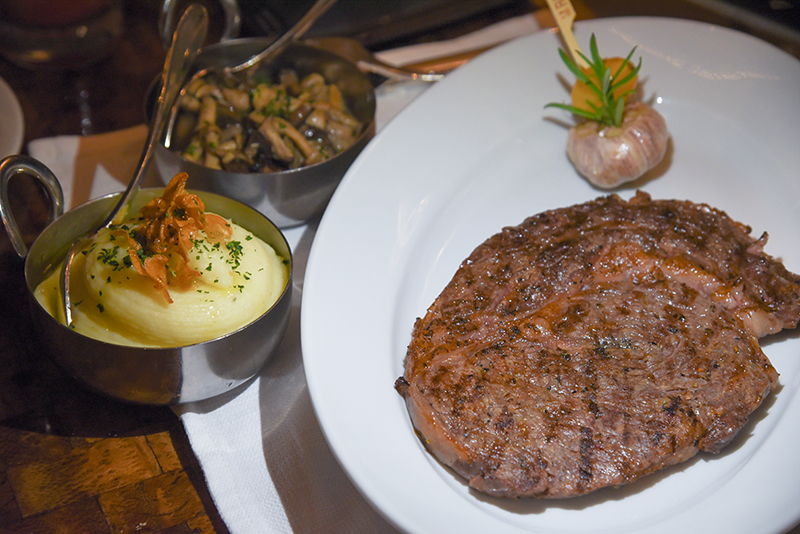 wagyu steak from the peak grill

Despite the rain on a Saturday evening, I found the restaurant still full to the brim for dinner. No one else seemed to mind that the outdoor section was totally closed off (for safety reasons) and everyone was just chatting away and enjoying the food. The restaurant features a grill concept with a mix of seafood dishes but it is the steak that should be your main reason for dining here. I had the Australian Wagyu Rib Eye which came with a marble score of 6. The meat was insanely tender with generous layers of fat in between. Steaks here also come in a variety of sauces including bearnaise, red wine jus, black peppercorn, mushroom and salsa verde. 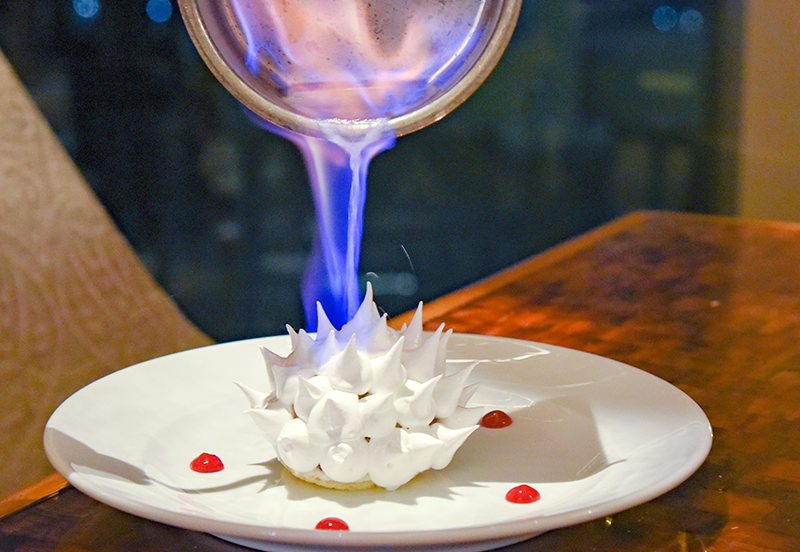 baked alaska from the peak grill

For a dramatic finish, order a portion of the Baked Alaska which is torched right before your eyes. You won’t regret it!

Elsewhere, Grand Hyatt Manila’s other dining concepts represent all the most popular cuisines in Manila with the exception of Japanese. The hotel plays the “live station / interactive show kitchen” concept quite well, even in the Chinese restaurant – No. 8 China House, which has been getting pretty good reviews. 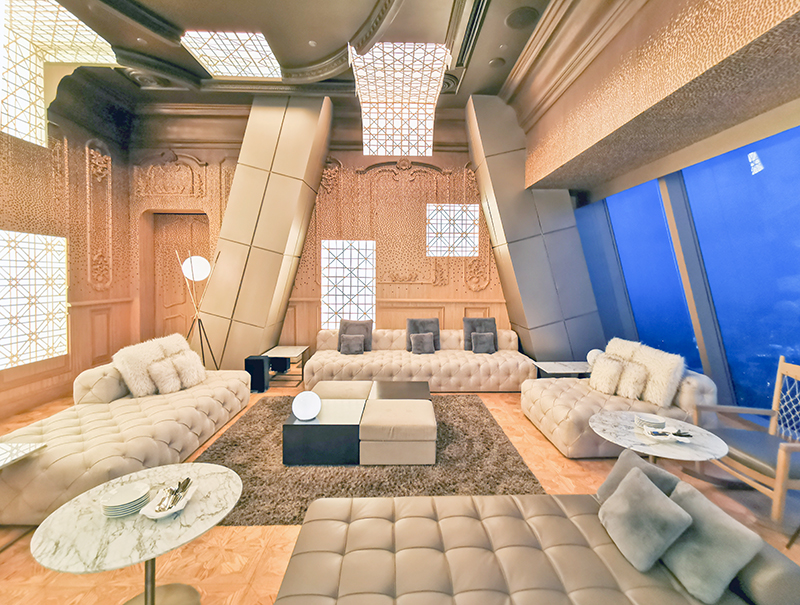 the peak at grand hyatt manila

Some of The Peak’s private rooms are nicely done up. There is also a more intimate whiskey bar for aficionados. Overall, it’s definitely one of the more interesting rooftop bars I have seen in Southeast Asia. 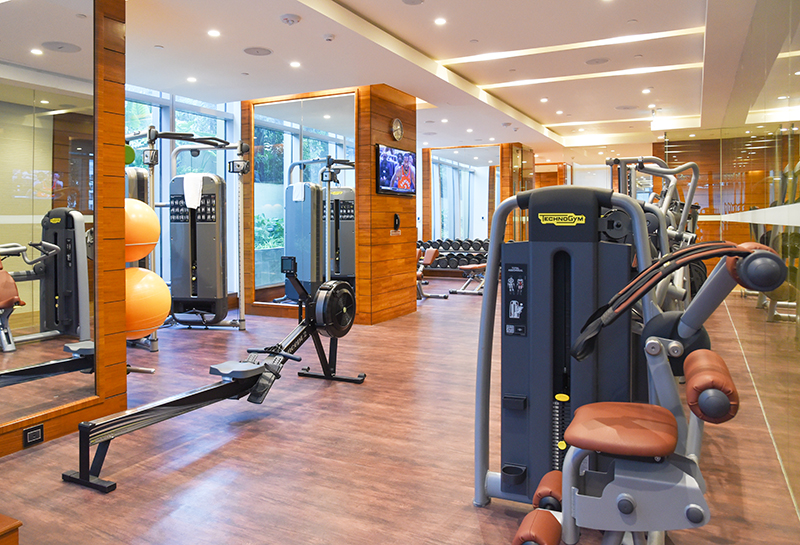 For a hotel that is not connected to a luxury condo within the same building, I have to say I was quite impressed by the wellness facilities here. The gym was not particularly huge but it boasts of the complete set of equipment. Unlike other luxury hotels in Manila such as Fairmont Makati where their fitness facilities are integrated with a condo, only hotel guests and occasional members use the gym. During both times I visited, I found myself the only guest working out at the gym. 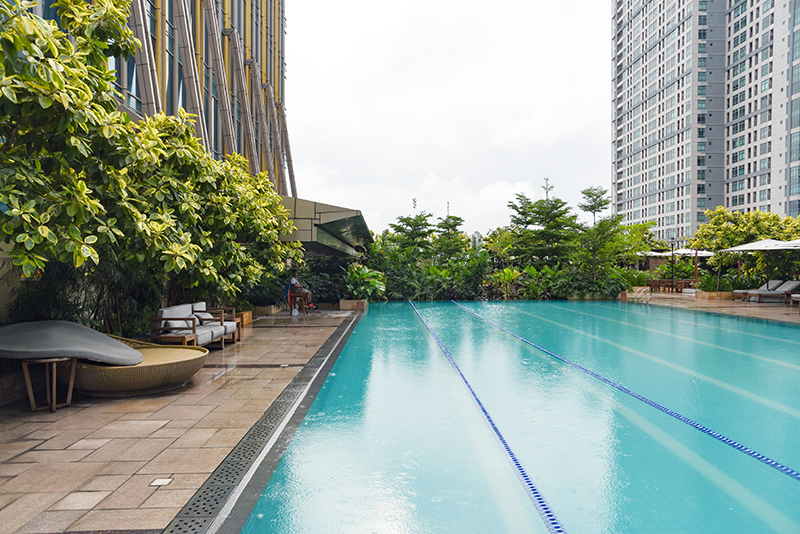 Not many hotel guests also realize it but they’re free to use the inhouse spa’s jacuzzi and sauna. As with most staycation-ers, I spotted most guests lounging around by the swimming pool instead.

Without question, Grand Hyatt Manila has raised the bar where hotels in Manila are concerned. It does so not only with its dazzling array of dining and bar concepts, luxurious rooms and “view” but equally with its strong service culture. With a genuine desire to please, nothing seemed too much to ask for especially when it came with the club lounge staff. Although the property is located right in BGC, the vibe here was very much relaxed during the weekend that I stayed with none of the running children or crowds that I see elsewhere. I will definitely be back and hopefully the next time I visit The Peak, the weather will be much better.