The building where the current Dusit Thani Manila now stands has had a notable history where hotels in Manila are concerned. Originally opened in 1976 as the Manila Garden Hotel from the building spree that occurred for the IMF Convention then, the property later became Hotel Nikko Manila Garden and was acquired by the Dusit Thani Group in 1995. As it stands, the Dusit Thani Manila is one of the first (if not the first) Dusit Thani hotel outside Thailand and as such, the property has an undeniable Thai flair. 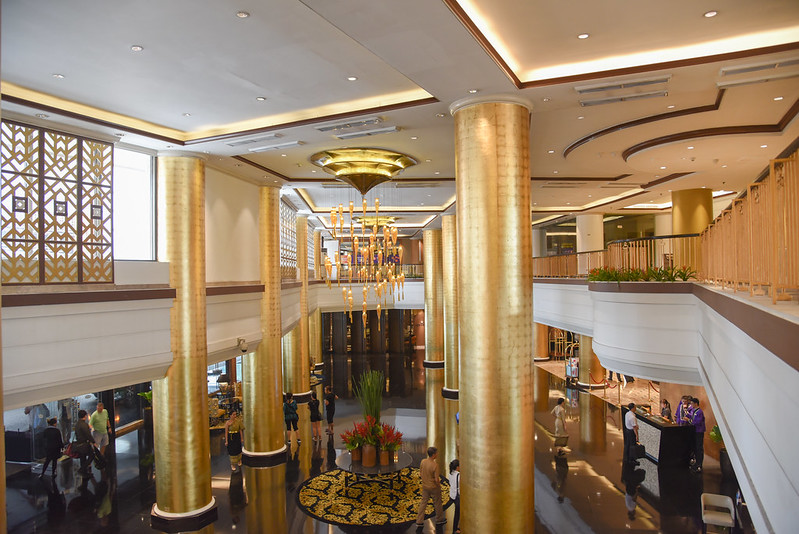 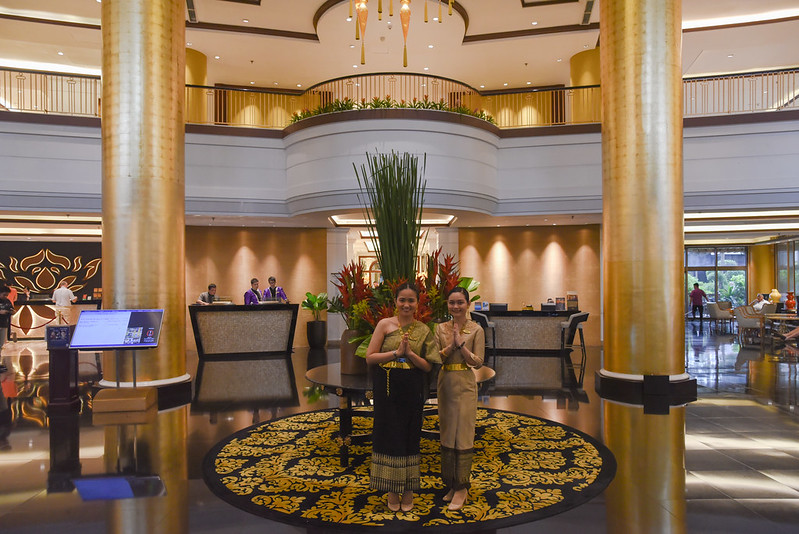 Walk into the lobby of the Dusit Thani Manila and you’d be forgiven to think that you’re in Bangkok. Columns painted in gold, hanging light fixtures and staff members dressed in traditional Thai attire all attest to the royal Thai concept permeating the property. 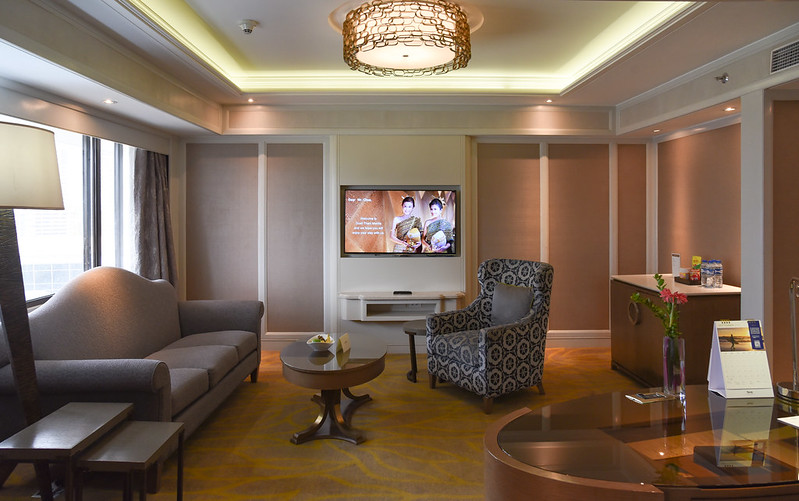 For this particular occasion, I stayed at the Premier Executive Suite, a spacious 73 square meters oasis amidst the hustle and bustle of the CBD. The room consisted of a large living and working area, a bedroom as well as a walk-in closet and bathroom with standalone tub. 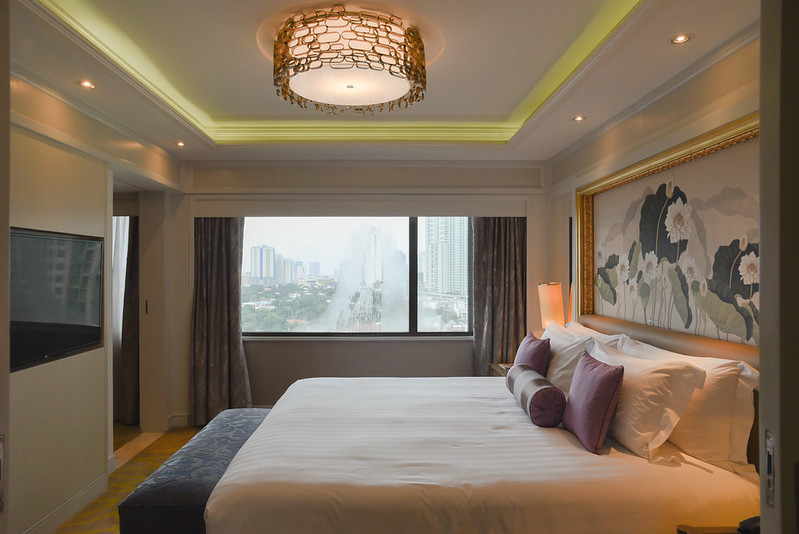 What I loved about the suite was the presence of several seating options inside. If one has to get some work done, there’s an office chair and desk complete with a lamp and power outlets. For lounging, there is a couch and an armchair. There’s certainly a lot more to go around than what the 2 or 3 person occupancy suggests, allowing even for entertaining guests should the need arise. Of note is the welcome fruit basket here which includes a piece of mangosteen aside from the usual tropical fruits. I thought that was a nice touch, especially if the intention is to evoke Thai sensibilities. 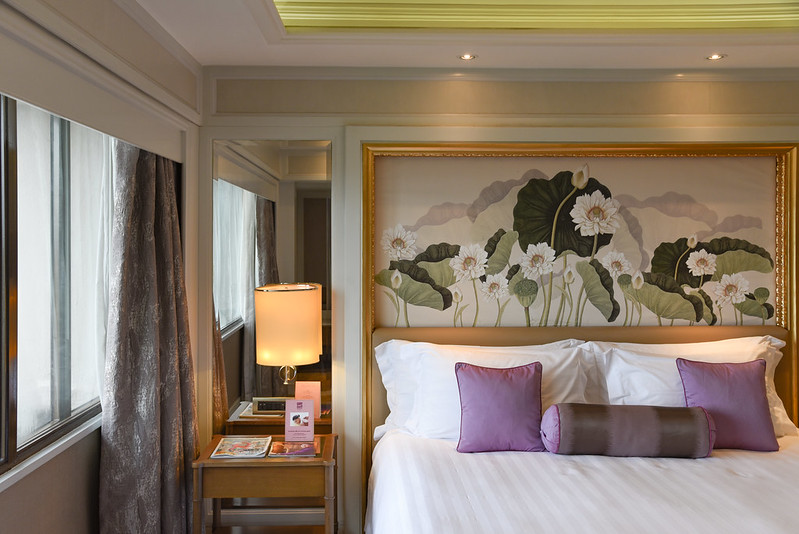 Speaking of Thai sensibilities, there’s probably nowhere else in the hotel that perfectly captures Thai design than in the bedrooms. I could have sworn that I’ve stayed in a similarly-styled hotel in Bangkok with the bright throw pillows set against the floral painting on the walls. Separated from the living area through a sliding door, the bedroom also comes with a walk-in closet which has enough space to put in someone’s entire wardrobe. For those considering the Dusit Thani Manila for a long stay, the Premier Executive Suite certainly fits the bill. 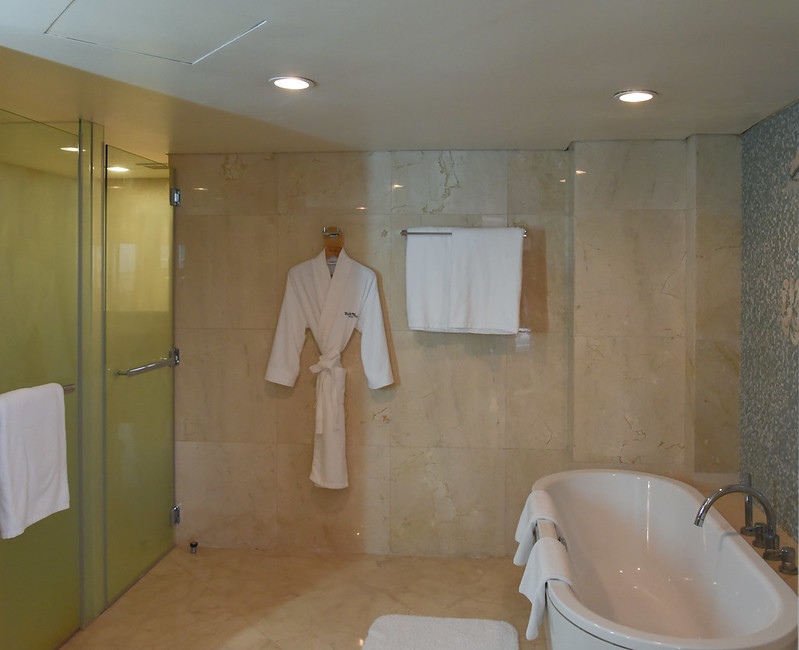 While the base-level rooms at Dusit Thani Manila don’t come with a tub, the suite has a rather attractive standalone tub for those who appreciate a good soak. As with any respectable upscale hotel, there is also a separate partition for the toilet as well as the showers. 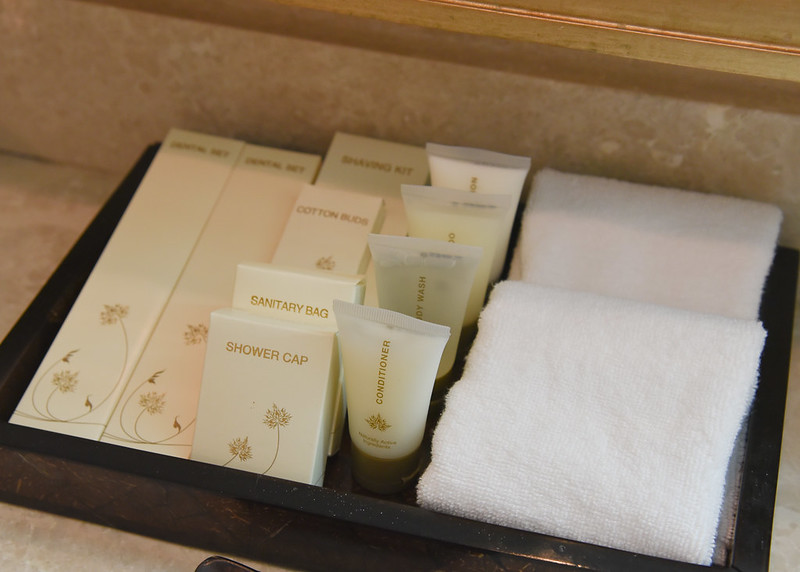 If there is any downside to the room, it would probably be the inhouse toiletries being used here.  For guests staying in a suite, it would be great if the property could put in a better brand like what other hotels do. 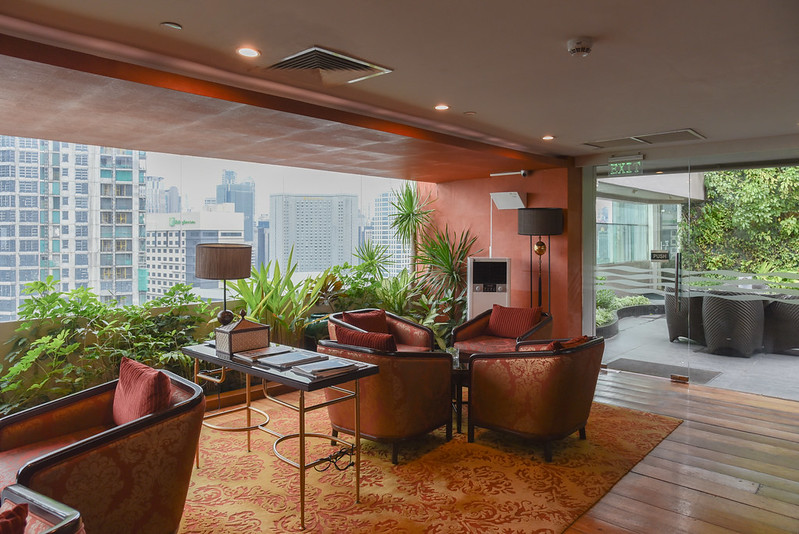 During my stay at Dusit Thani Manila, I was also given lounge benefits. The lounge here is located in the 17th floor and guests need to transfer to a different lift in order to reach it. For everyone’s benefit, here are the club lounge benefits:

The Dusit Thani Manila club lounge is slightly different from other club lounges in Manila in the sense that guests can enjoy both outdoor and indoor seating depending on their preference. While I very much enjoy sipping cocktails in air conditioned comfort, those sitting outside are afforded views of the BGC skyline.

I visited the club lounge twice during my stay there, once for afternoon tea and the second time for evening cocktails. Afternoon tea is a relatively simple affair with sandiwiches, a variety of crackers and nuts as well as a fruit platter. It gets more interesting during evening cocktails when guests can choose from a variety of hot items as well as appetizers and desserts. It could very well qualify as a light dinner for those who don’t plan to head out at night. 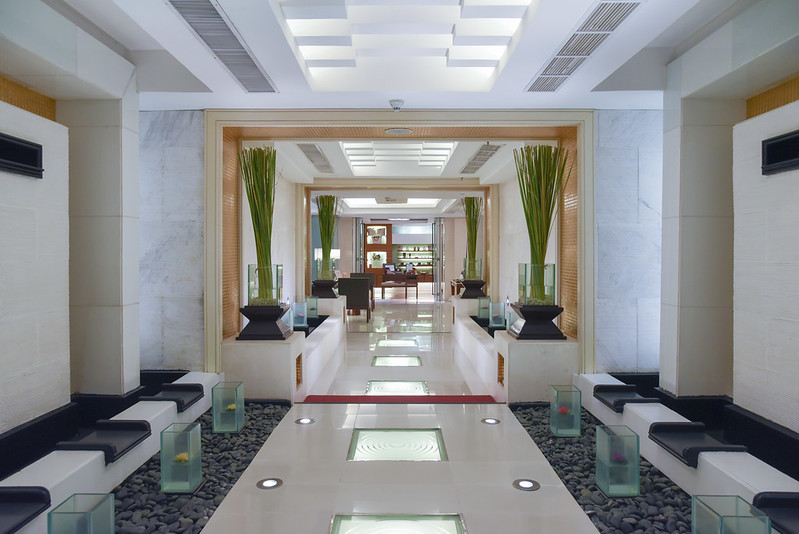 During my stay at Dusit Thani Manila, I also checked out the inhouse spa. After all, what is a decent Thai-managed hotel without a massage venue? In terms of authentic Thai wellness treatments, the Devarana Spa certainly delivers. Many of what’s on offer in the spa menu are offered in conjunction with other in house spas across the Dusit Group. For instance, I went for the 120-minute Athlete Reviver Devarana Tamrab which was a seasonal special across the Dusit network. For this Php 6,000 procedure, I was treated to a 90-minute hermit body twist and yoga regime massage to really get the body moving. It’s a relatively intense massage to help soothe stressed muscles that may come from exercise or day-to-day stress.  There is also a short but relaxing facial massage and a minty aloe gel face mask thrown in towards the end of the massage. To cap it off, I enoyed a herbal bath in the tub. I asked about the ingredients placed in the water and it apparently consisted of ginger, black tea and some vegetables to help tone the skin and widen blood vessels. 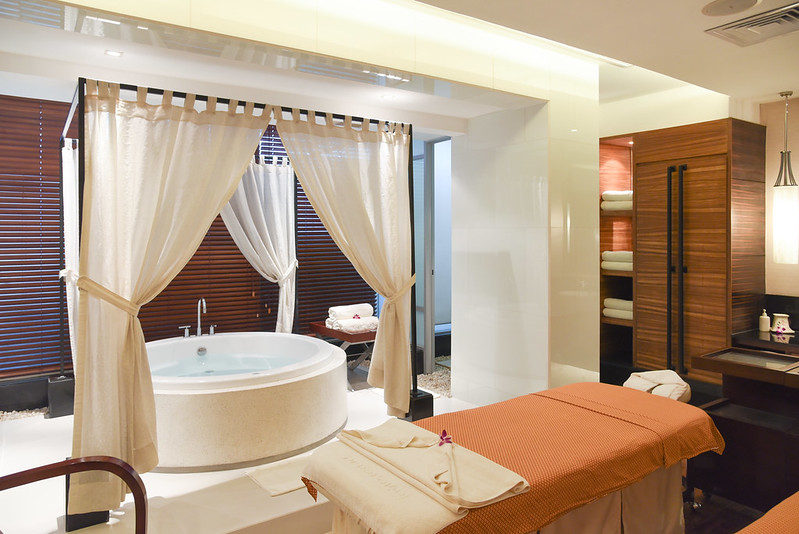 Other than the procedure itself, the spa is also impressive. My room could easily fit two people and had a large round standalone tub. Even the reception area is well-appointed and spacious – a telltale sign that the hotel really focuses on its wellness venues. 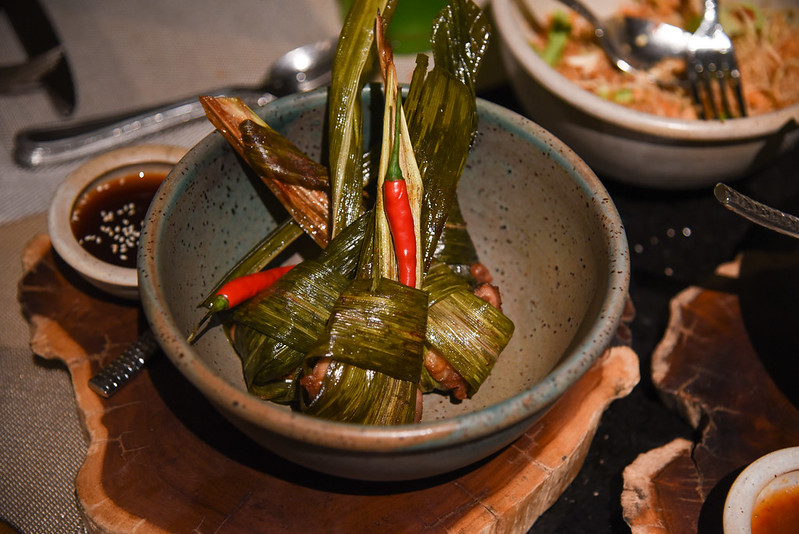 As I’ve not had Thai cuisine for quite some time, I was really excited to try out Benjarong, the inhouse Thai restaurant at Dusit Thani Manila. My excitement was compounded no less by CNN’s recent citation of the venue as being one of the hottest new restaurants for 2018. Still, I have to admit that I had my own doubts prior to the meal. How could a Thai restaurant that is NOT in Thailand be that good? 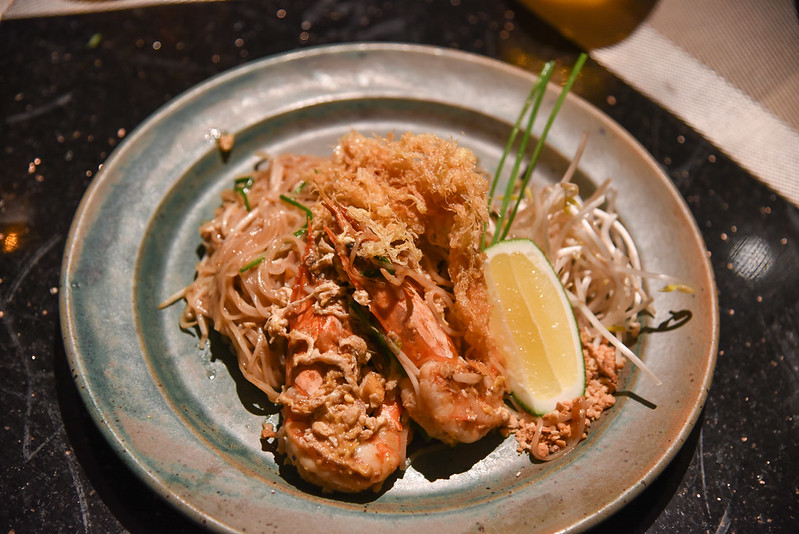 My actual experience left me really impressed. Having been to Thailand quite a number of times, I would have to say that the cuisine here is authentic. At the same time, certain elements have been catered to Filipino tastebuds. For instance, you can request for non-spicy versions of your favorite curries. Many of the salads are also sourer than how they usually are in Thailand, which suited me just fine. I heavily recommend the Som Tam Tord (Php 425) to start with. A crispy version of the papaya salad, the added crunch compounded by the sour dressing delivers an extra kick. It’s also prepared right in front of you as you order.

A dish which I have not tried before is the Gaeng Khieo Wan See Krong Neau Toon (Php 890) or the 72-hour slow cooked beef ribs with green curry. I usually don’t get to try beef dishes when at a Thai restaurant so this piqued my interest. The beef was extremely tender and its fibers collapsed easily upon the first bite. This is another must-order if you’re up for something heavier. 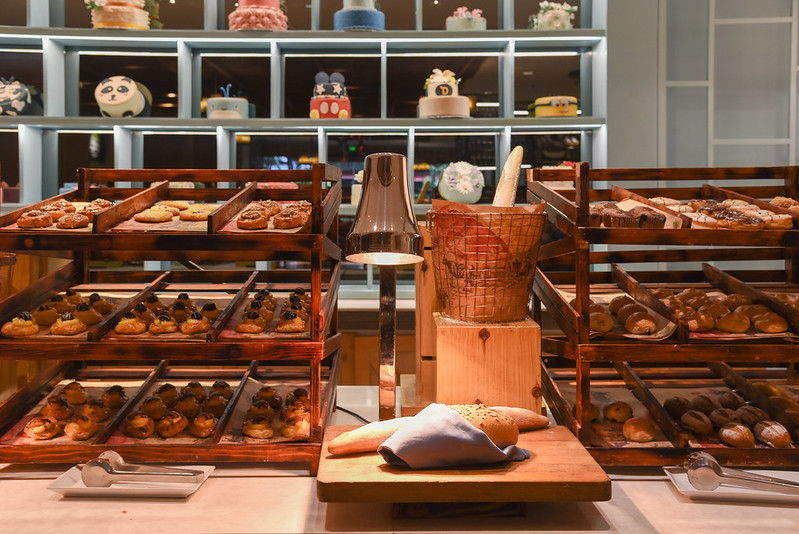 During my stay, I had the option of having breakfast at either the all-day-dining restaurant which is called The Pantry or at the club lounge. As I was up relatively early that morning, I decided to have it at the former. 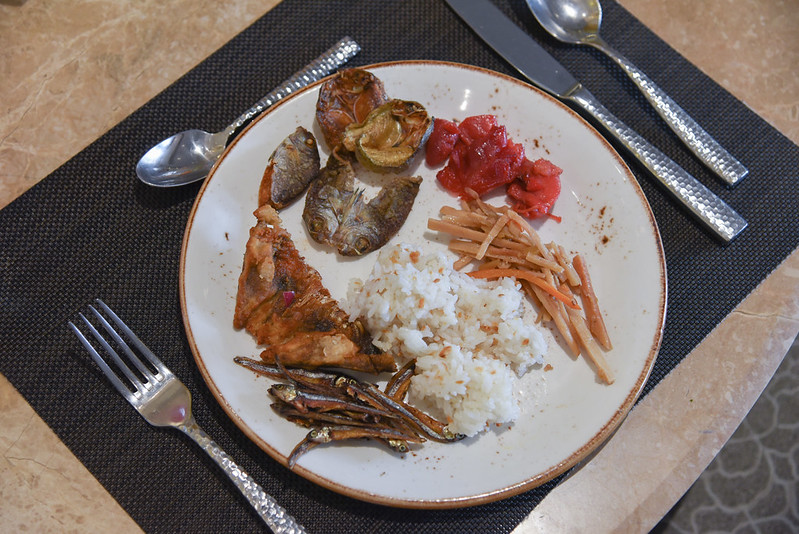 The breakfast buffet has an eclectic range of cuisines ranging from western favorites such as bacon, sausages and various salads to Filipino staples such as dried fish, tocino and even garlic rice. I naturally went for the Filipino dishes! One thing which impressed me about the breakfast here is how the coffee is presented. I ordered cafe latte on two occasions and found my cups with intricate latte art. Normally when it comes to hotel breakfasts, I don’t see staff members making such effort so seeing it here at Dusit Thani Manila was definitely a surprise.

Dusit Thani Manila has plenty going for it. Staying here is not just about the room but rather a holistic experience given the strong in house F&B offerings and spa proposition. Think of it as a mini-getaway without having to escape to a resort somewhere. While I thoroughly enjoyed my stay, the food and spa experiences left an even greater impression on me. I will be back for these.