If there was one hotel in Manila that I’ve long wanted to try, it would be the historic Manila Hotel located near Rizal Park and Manila Bay. The property is to Manila as the Raffles is to Singapore, the Metropole is to Hanoi or the Strand is to Yangon. For several years, I’ve admired the hotel for its iconic lobby but circumstances never led me to stay there or even try the food options available in-house. 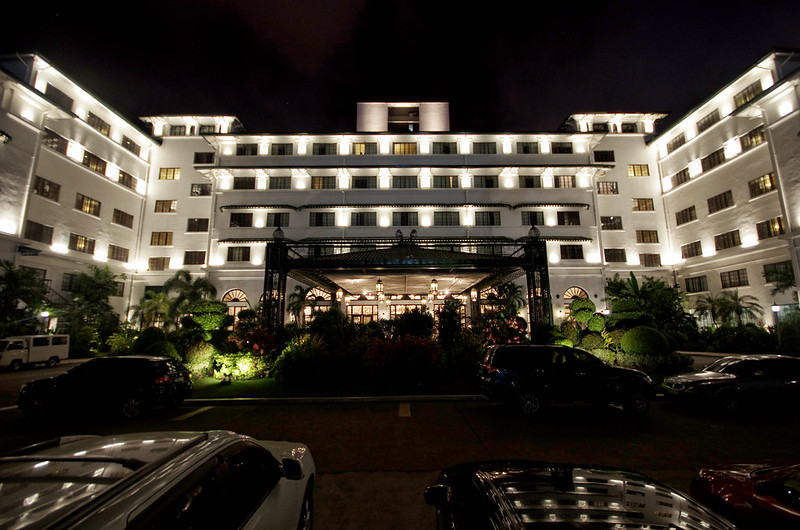 Manila Hotel has the distinction of being the longest surviving luxury hotel in Manila and is 103 years old. It is the biggest and most distinct heritage hotel in the city dating its roots from the American colonial period in the early 20th century. It has seen World War 2, where the hotel subsequently became living quarters for the Japanese Army and the martial law years when Imelda Marcos used to host lavish parties in the hotel. The property has witnessed the ups and downs of the city and due to its strategic location, the ups and downs of the country as well. During Manila Hotel’s centenary year in 2012, the rooms were renovated and in-house restaurants were spruced up and revamped. 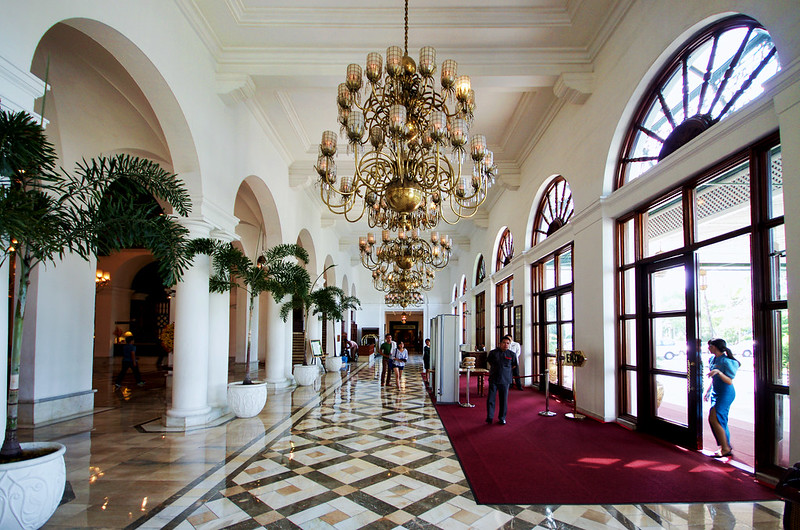 The hotel is located at the older part of Manila, close to tourist attractions such as Rizal Park and the walled city of Intramuros. If you’re driving there, it’s better to arrive early as parking slots get filled up in the evenings due to parties and various functions held in the hotel. Due to the historic nature of the property, there is no underground parking lot. Parking spaces are all open air. 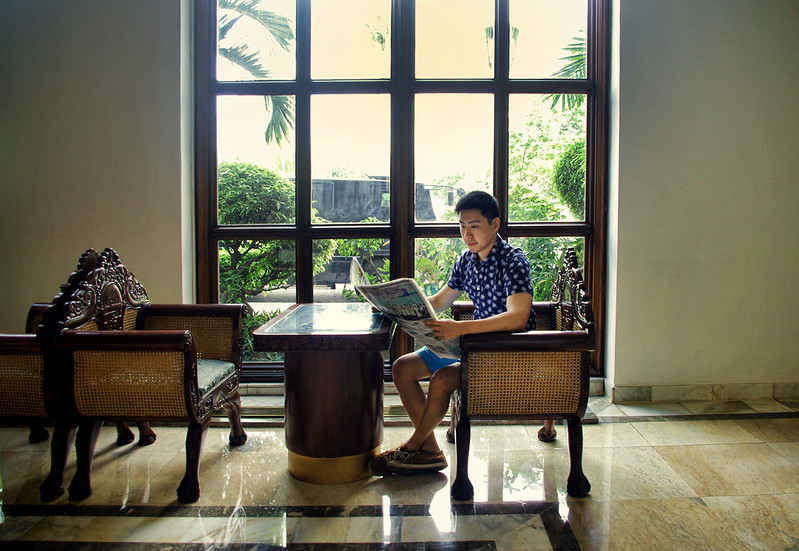 My check-in was pretty quick. What I noticed about the hotel is that they have several check-in counters with a capacity that easily exceeds a dozen service staff. I was promptly shown to my room by one of the staff from guest services who promptly informed me of the various nuances in the room. 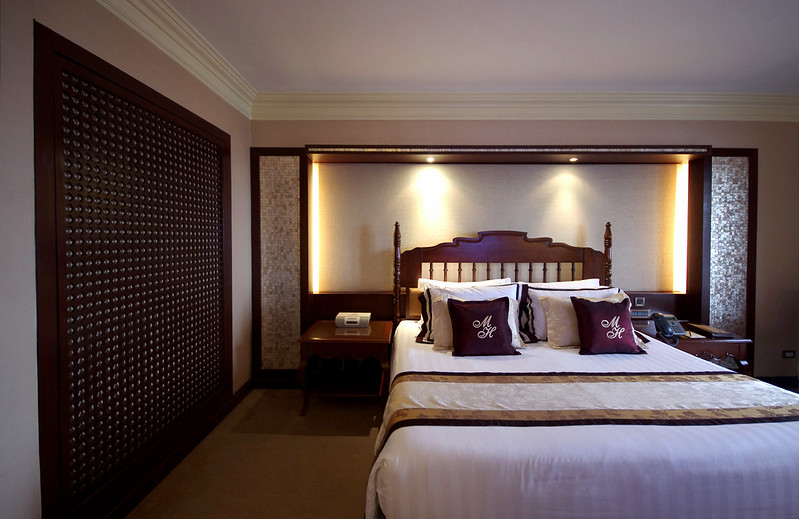 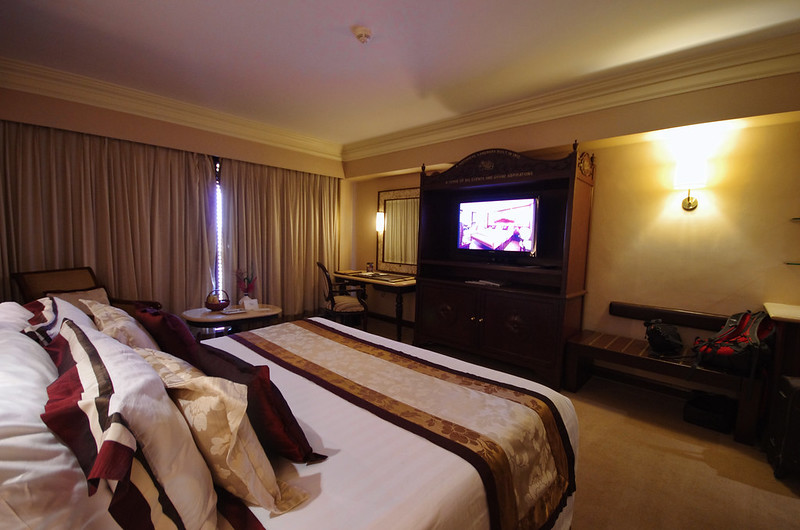 The room exudes a minimalist Filipino style reflecting the renovations done a few years back. Filipino elements such as lattice panels and seashells are used heavily alongside old-world style woodwork. Technology wise, everything is up to date. An iPod dock graces the bedside table while a large flat screen TV stands across. 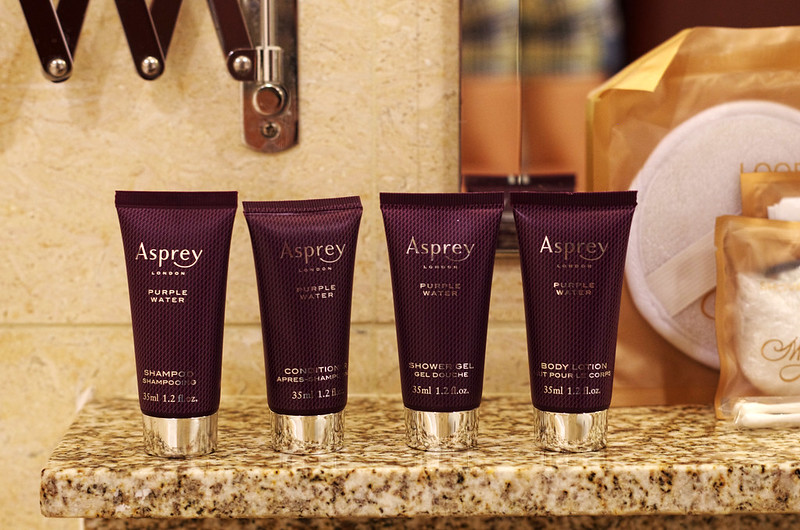 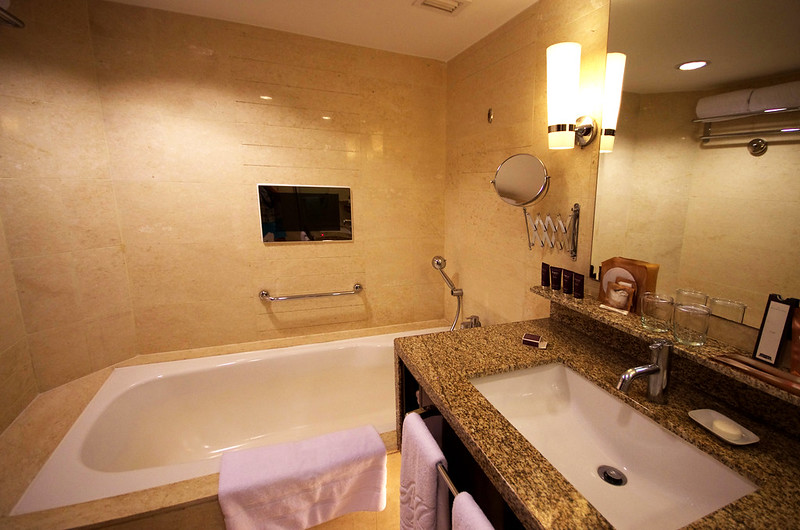 The bathroom likewise is very modern. The first thing I noticed was the waterproof TV on top of the bathtub which allows guests to enjoy a warm soak while at the same time catch up to their favorite TV programs. As with any respectable luxury hotel, the shower area is separate from the tub and features a rainshower. The toiletry set is from Asprey. Throughout all my travels, the only other times I encountered this brand in a hotel was in The Empire Hotel in Brunei and the Ritz Carlton Millenia Singapore. Guess Manila Hotel is with good company where toiletries are concerned. 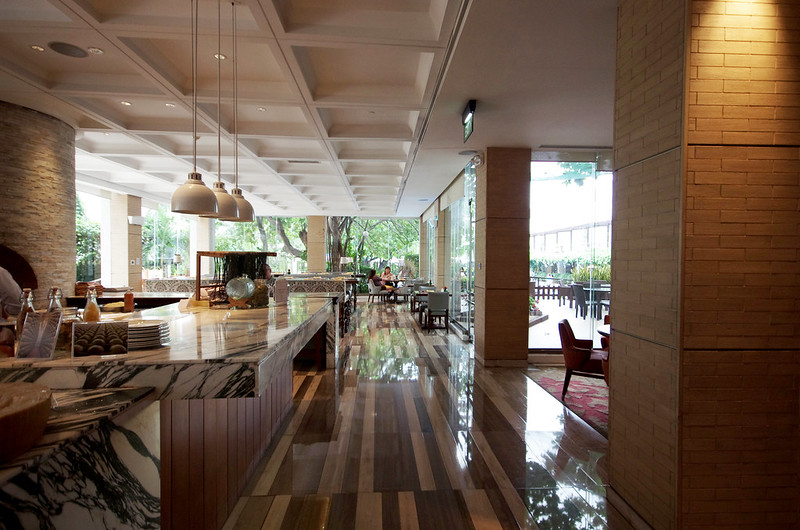 The hotel is a tourist attraction in itself having hosted several famous people in the past such as General Douglas MacArthur who stayed there for 6 years! That being said, the hotel is very much updated when it comes to facilities. Aside from the all-day dining restaurant, Cafe Ilang Ilang, there is also a Chinese restaurant, Mabuhay Palace and French restaurant, Champagne Room. For those who fancy a drink, there’s an atmospheric bar that goes by the name Tap Room. 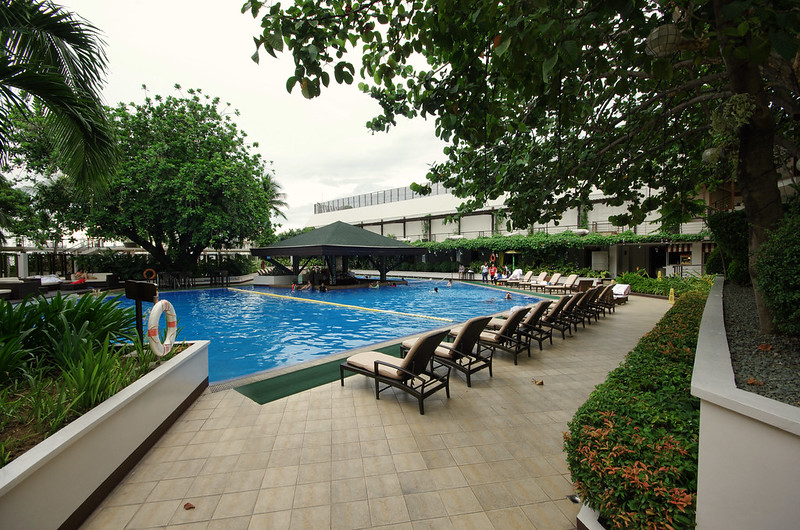 The swimming pool and health club are located at the northern side of the property, close to Cafe Ilang Ilang. While the gym is adequate in size, the health club also features a sauna and jacuzzi at the second level which I’m sure staycationers will be happy to find. 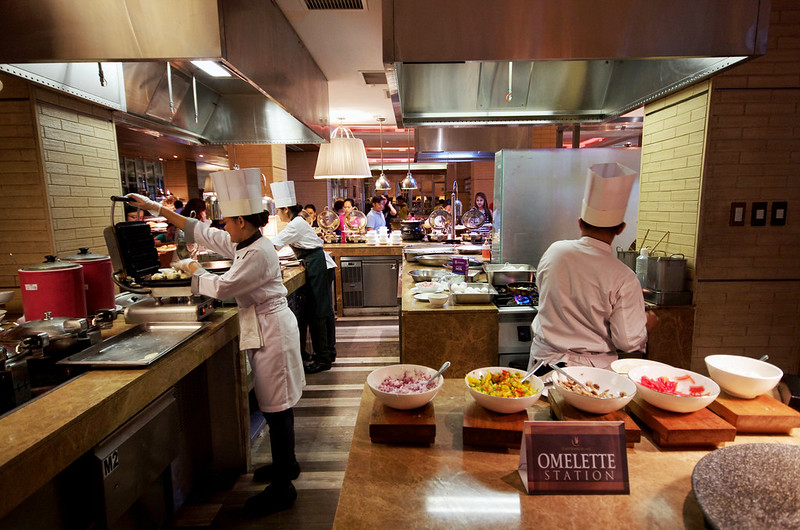 I had many of my meals at the hotel. Breakfast and dinner at Cafe Ilang Ilang as well as lunch at Mabuhay Palace. To be frank, I have never tried Manila Hotel’s food offerings prior to my stay there. But I was pleasantly surprised with both venues and noted a couple of strong points with Manila Hotel’s F&B interpretation. 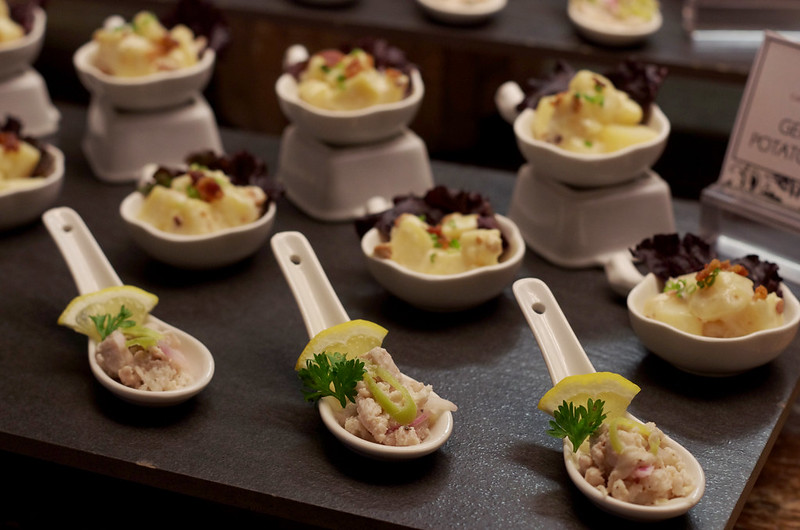 The breakfast buffet was extensive and featured dishes from all over – western, Chinese, Filipino, etc. What sets Cafe Ilang Ilang’s breakfast apart is the wider assortment of Filipino dishes. During my time there, I got to sample the likes of arroz caldo (Filipino style chicken congee), dried bangus (milkfish), longganisa (Filipino style sausages) as well as an assortment of ube (purple yam) pastries. 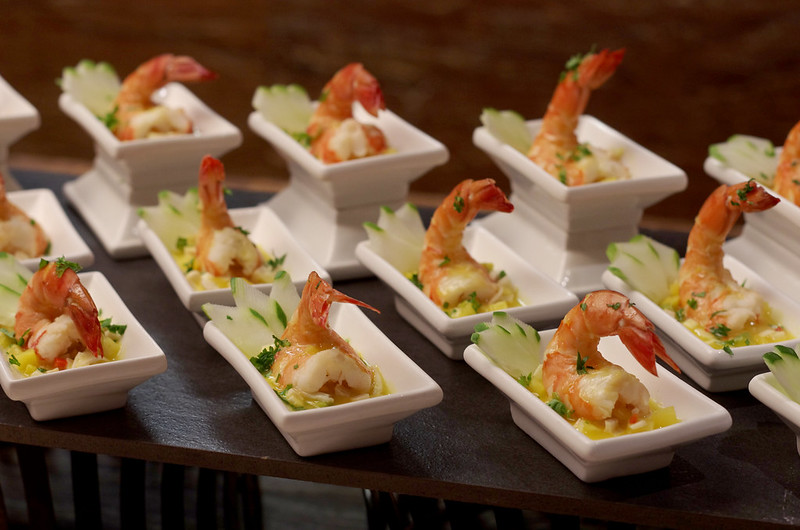 Dinner at Cafe Ilang Ilang however, was a different story. While it still featured a wide variety of Filipino dishes, there were more cuisines available here than in any of the buffets I’ve tried in Manila. Let’s see – there was of course western and Chinese, followed by Japanese, Filipino and Indian. I also found Italian, Thai and Korean which I rarely encounter in other buffets. 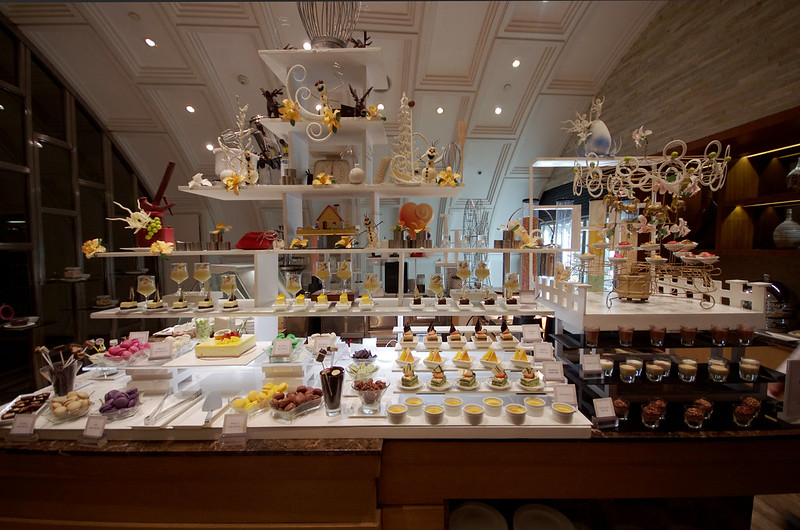 Desserts were all nicely placed on a large multi-tiered display table which accentuated the array of sweets available. By this part of the meal, I was stuffed to the brim and only managed to try some macarons (the ube flavored macarons are the highlight) as well as creme brulee.

My stay at Manila Hotel is by far the most distinctive of all my hotel stays in Manila. Although well-appointed and possessing great ambiance, one just doesn’t come here to experience utter luxury and comfort. While Manila Hotel has these two qualities, they become secondary to the heritage experience that this property imbibes and which I find to be its unique selling point. In this regard, my stay at Manila Hotel is easily my most interesting hotel stay experience in the city. The property makes use of Filipino elements to its advantage and that’s something that every guest will remember during their stay.