Manila has seen a boom in hotel openings in recent years with several established hotel chains adding properties in the city. Part of this is due to the rise of integrated resorts and casinos – like those in Solaire or Resorts World Manila – which has led to a rapid change in the local hospitality scene. The newest integrated resort to open this year – City of Dreams Manila – comes with three new hotels. Namely, these are Nobu Hotel, Crown Towers and Hyatt. I was most curious to check out the Nobu Hotel Manila, the hospitality arm of the famous celebrity restaurant, Nobu. The property in Manila is just the second such hotel to open in the world which makes it really special as it brings about an experience that cannot be had elsewhere in Asia.

Everyone seems to be well aware of this unique selling point and it was quite evident when I was at Nobu Hotel Manila just earlier this week. When I entered the hotel lobby for the first time, I witnessed a large group of staycationers checking out. Business has been brisk for the property since it opened, with weekends typically booked out. My stay was for Sunday-Monday which fortunately was much quieter. 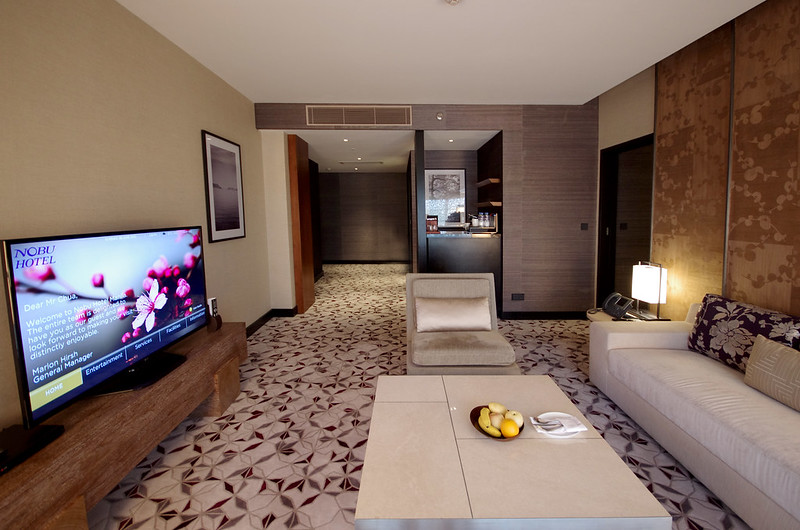 Despite the relatively busy scene at reception when I checked in, additional staff members were deployed to assist people at the queue so I never had to wait long to get my keys. 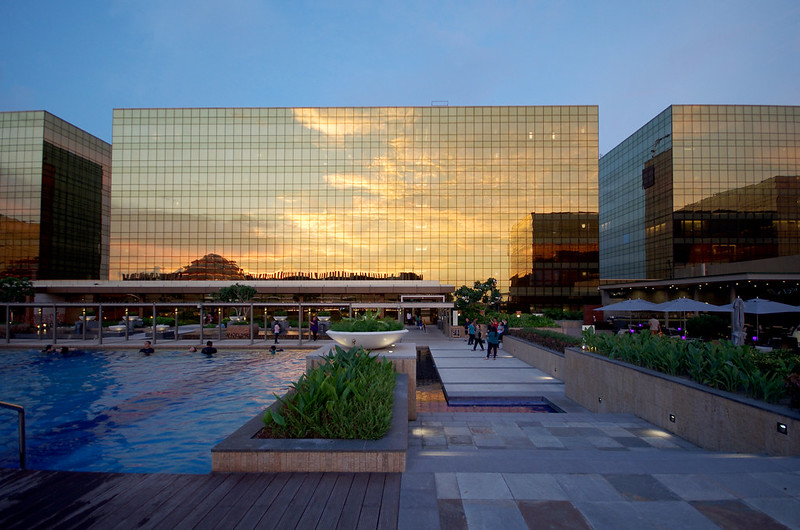 Like the other hotels at City of Dreams Manila, the Nobu Hotel Manila is made up of two mid-rise towers. I stayed at the 1st Floor of the South Tower which is actually 3 floors up from the lobby. This is the same floor as the pool area as well as the spa and fitness center. 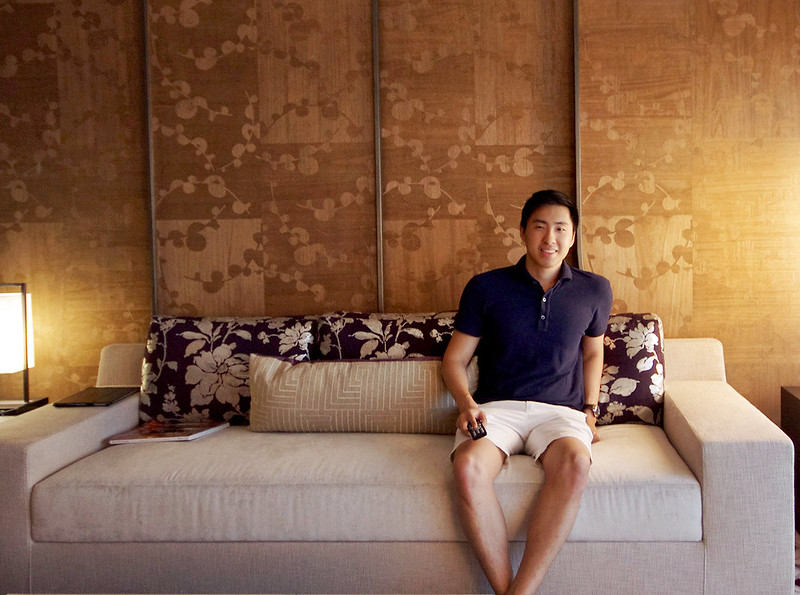 I was billeted at the highest category room of the house – the Nobu Suite. Entering it for the first time, I could not help but notice the subtle interiors. Neutral colors, minimalistic decor, calming artwork and cherry blossom patterns throughout the room created a soothing mood that separated it from other hotels I’ve stayed in. There was little of the typical decor that fill chain hotels and the ambiance was more in keeping with boutique hotels. 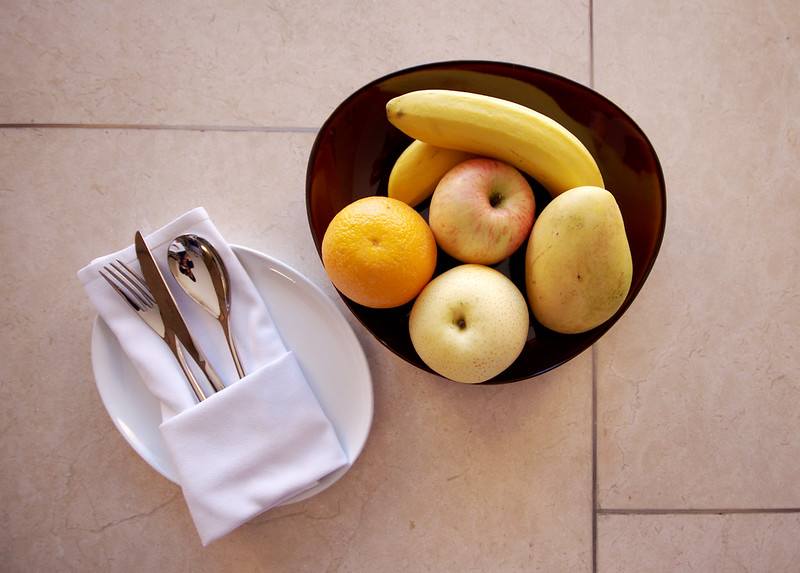 fruit plate at the nobu suite

At 68 square meters, the Nobu Suite came with a separate living room, a powder room and a minibar area that was detached from the living area. I was most amazed upon seeing my name flashed at the flatscreen TV and the in-room phone that I almost forgot to note the generous fruit plate lying on the table. 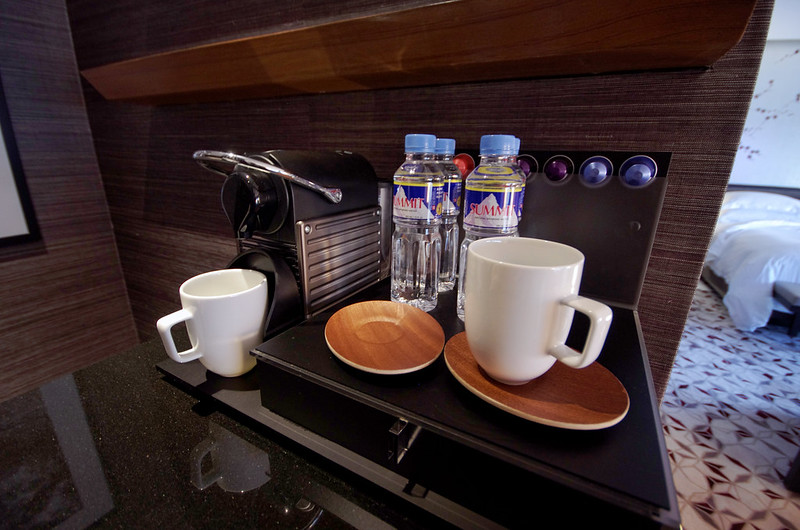 nespresso machine at the nobu suite

The suite came with all the creature comforts that one would expect for a hotel of this standard. There was a Nespresso machine with complimentary coffee capsules, an iPod dock and complimentary wifi access. I found the minibar here notable for its completeness. There was a wide range of snack items as well as alcoholic and non-alcoholic beverages that essentially filled the fridge to the brim. I even found a face mask and intimacy kit as part of the minibar! 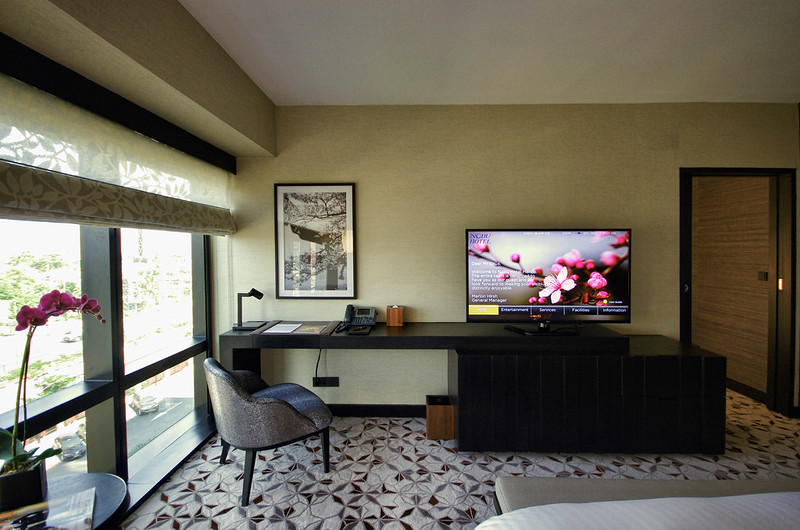 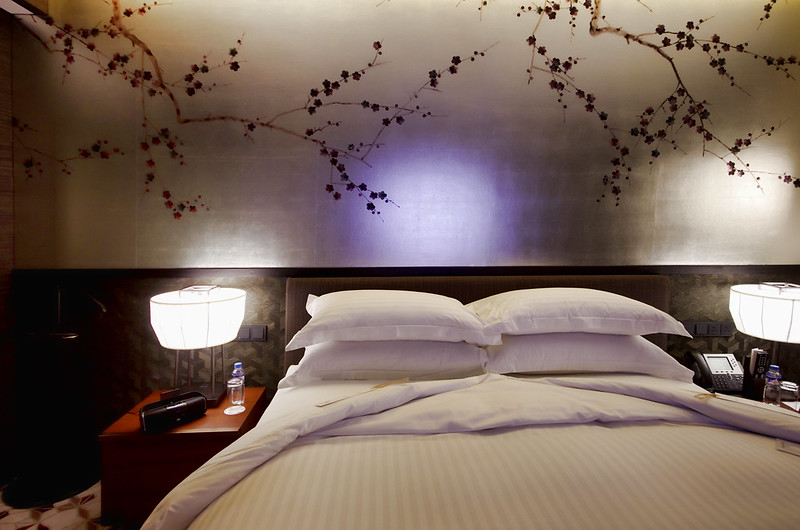 impeccable decor in the bedroom

Next, I entered the bedroom, having found turndown service already done (it was just 3PM then) with two fluffy sets of slippers already placed on the floor, additional bottles of water on the bedside tables and bookmarks on the bed. There was also a bottle of lavender mist included to aid one in having a good night’s rest. Cherry blossoms dominated the wallpaper of the suite’s bedroom which differed from the Japanese calligraphy themed walls of the normal rooms. The bedroom came with its own TV – a convenience if one’s companions prefer to watch something else. 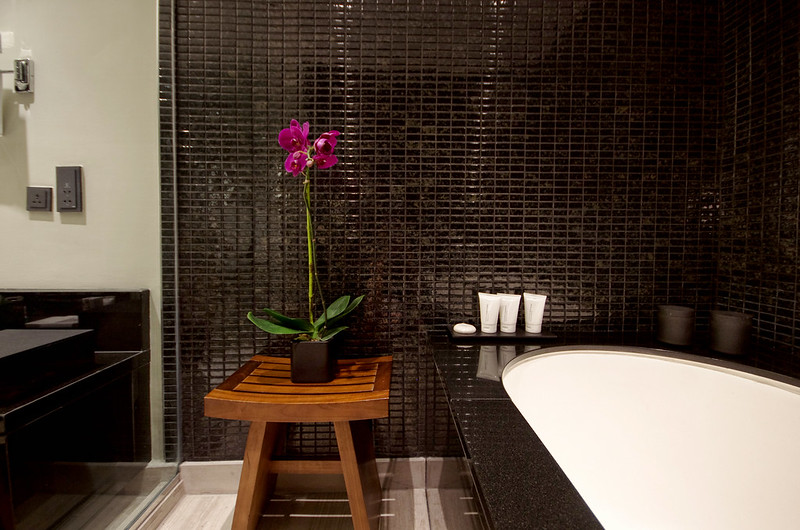 The bathroom was equally impressive. The hotel’s Japanese concept is perhaps no more poignant than at the toilet that had a built-in seat warmer and bidet. I am not entirely sure if Nobu is the only hotel in Manila with such capabilities but I won’t be surprised if it is. 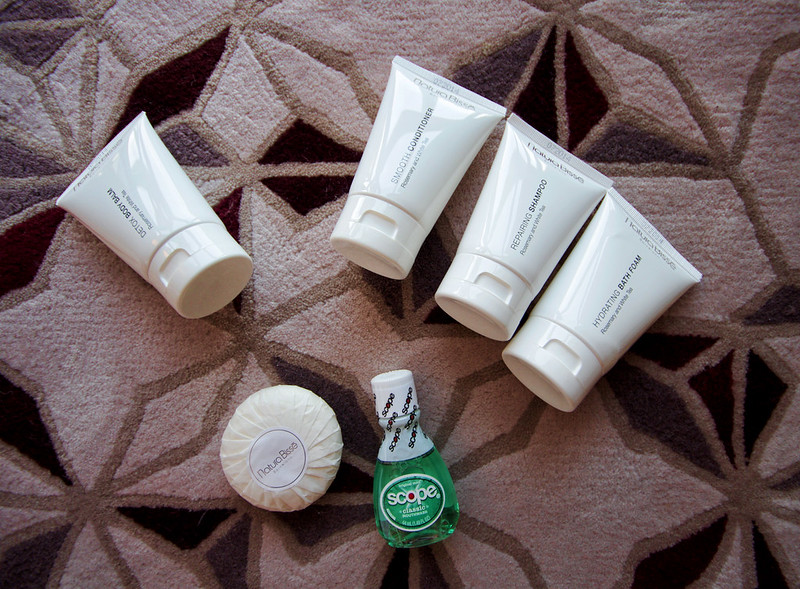 just some of the toiletries i found 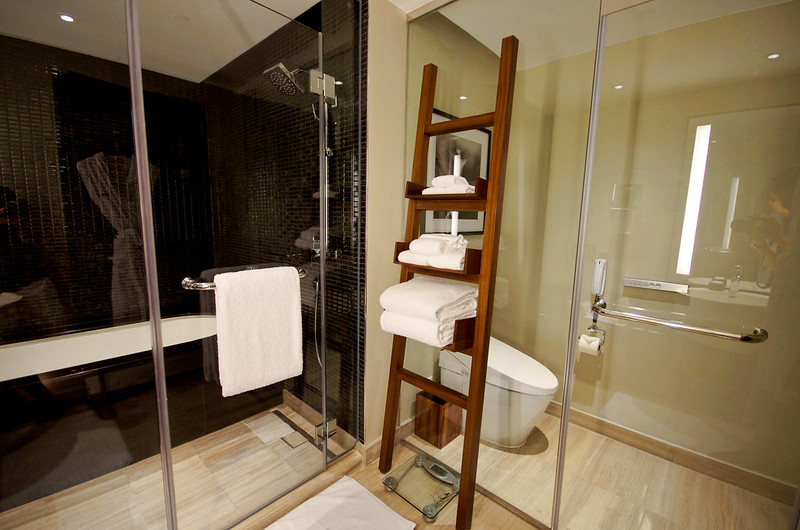 A partition led to the spacious bath and shower area which although in one enclosure were separate from each other. Toiletries were from Natura Bisse, similar to Nobu Hotel in Las Vegas. Of particular note was the breadth of toiletries included. Beyond the standard inclusions, I found a vanity kit, bath gloves, night cream and even mouth wash! The toothbrush was made of wood which made for an eco-friendly alternative to plastic ones. There is definitely a degree of amenity overload here that further increases the staycation factor of this property. 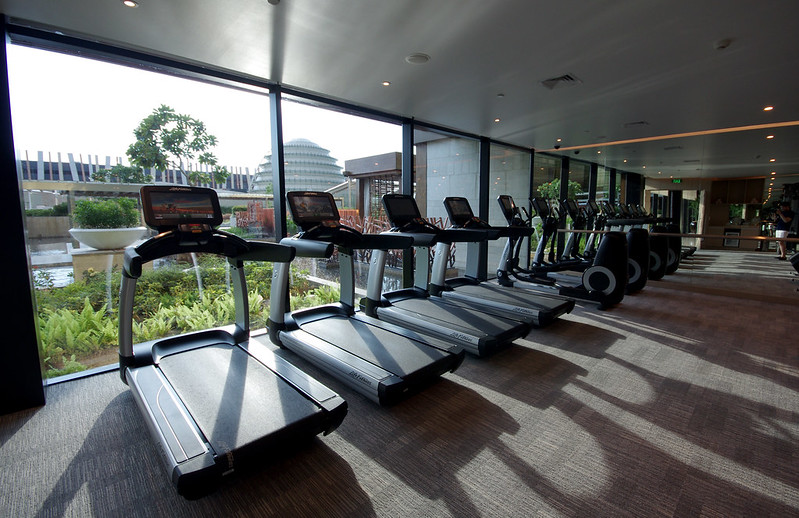 Just next to my suite are the spa and fitness center. I did not get to try the gym during my stay there but I paid it a visit. It’s of decent size and overlooks the pool area. It’s got a nice ambiance for a workout – which may add the motivation to exercise. The equipments are also state of the art, with simulation capabilities on their treadmills and exercise bikes. 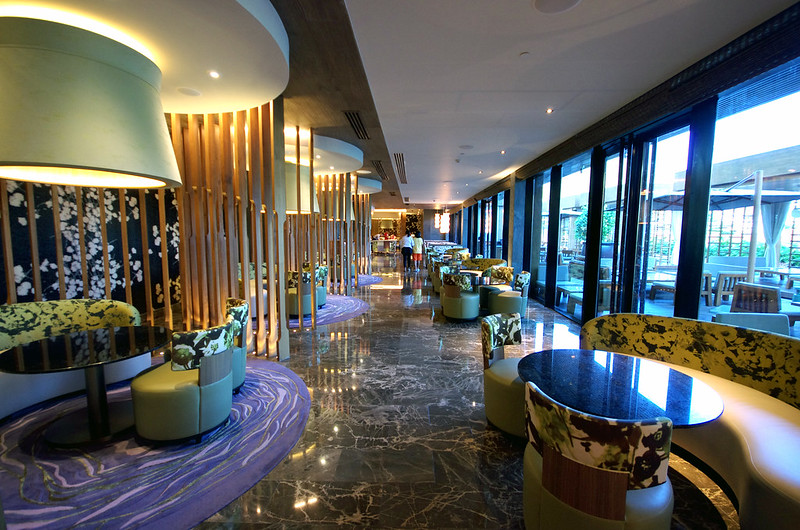 Breakfast was served at the much talked about Nobu Restaurant. In keeping with the theme, breakfast here works in the same way as in many upmarket hotels in Tokyo, where it is half buffet and half ala carte. 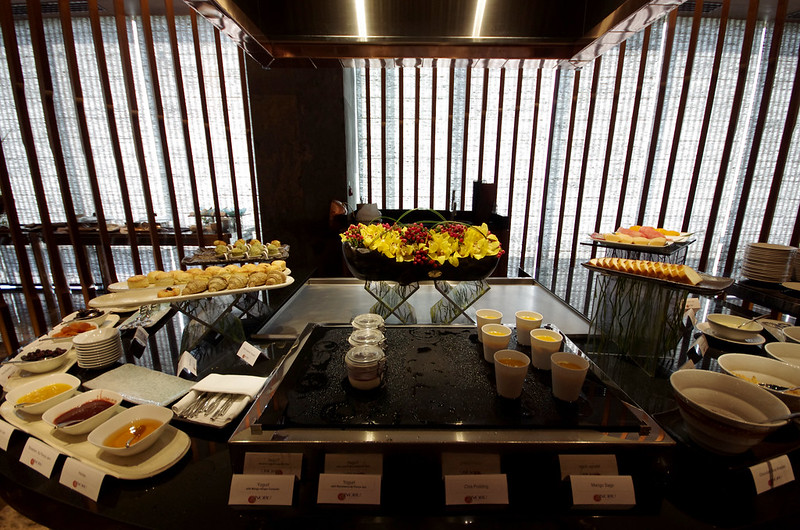 The buffet at Nobu Hotel Manila feature the same items that one would normally expect like bacon, pancakes, fruits, sausages and the like. But there are a couple of unique items even from the buffet table alone. 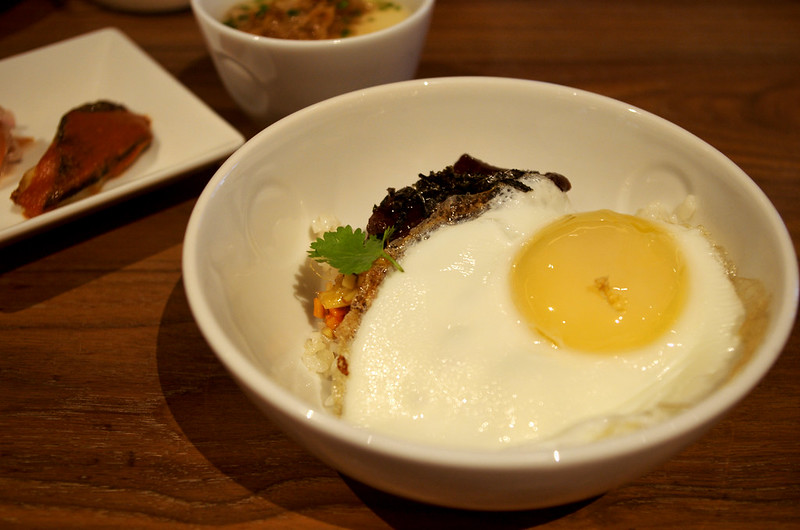 However, what one should be focusing on are the ala carte items. They change from day-to-day and a server handed me the ala carte menu for that day. My favorite has got to be the Nobu Style Tapsilog, a flavorful interpretation of the Filipino breakfast staple that left me wanting more. 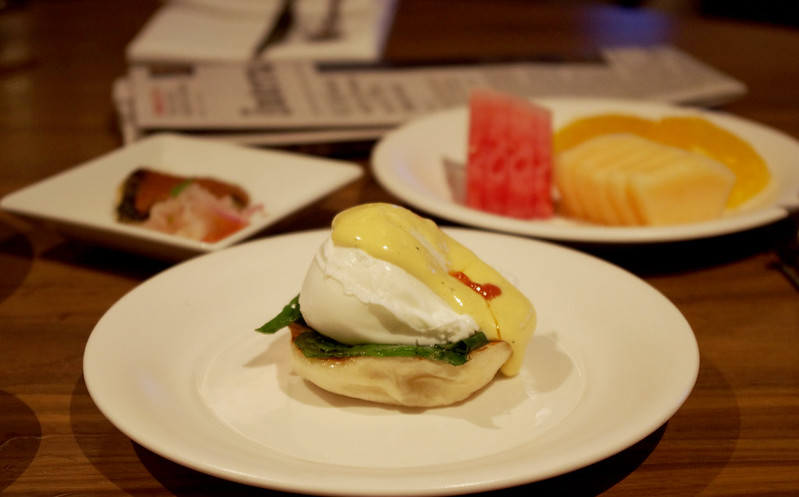 The Eggs Matsuhisa was not too bad. I especially enjoyed the bonito egg sauce that made it sumptuous to eat along with the Chinese-style bread. 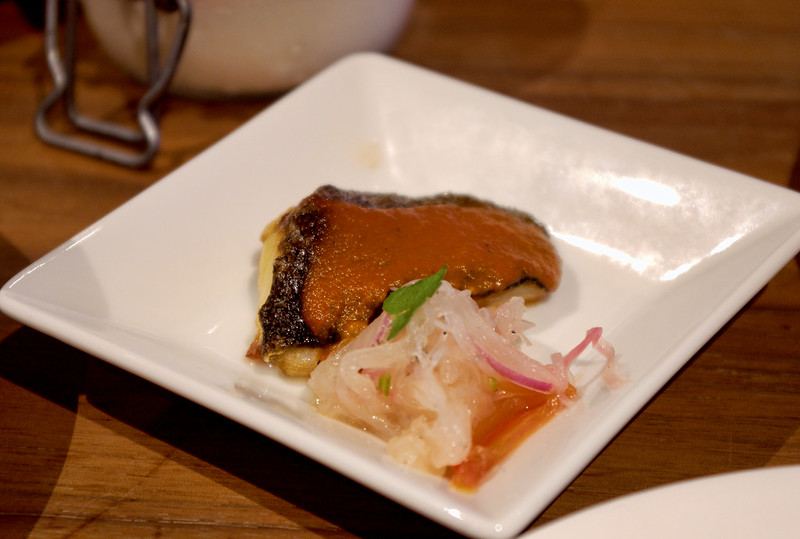 Curiously enough, I did see Shioyaki in the menu and inquired as to what it was. The server told me they were serving gindara (black cod) that day and indeed a tiny plate of black cod came my way when I ordered. I wonder if it’s of the same quality as the specialty Black Cod Miso of the restaurant.

On a separate note, non-guests can also have breakfast at Nobu Restaurant. As of this writing, it costs Php 1,232 for adults and half of that for kids.

As an integrated resort, there are plenty of things to do within City of Dreams to keep one busy. The complex has plenty of dining options not found anywhere else in Manila so it’s worthwhile to try some of them if you’ve got time. The Taipei 101 Ding Xian for instance, is the Manila branch of that restaurant at the top floor of the eponymous Taipei 101 building in Taipei. In Crown Towers, there is also The Tasting Room, a fine dining restaurant which has been getting a lot of buzz lately. 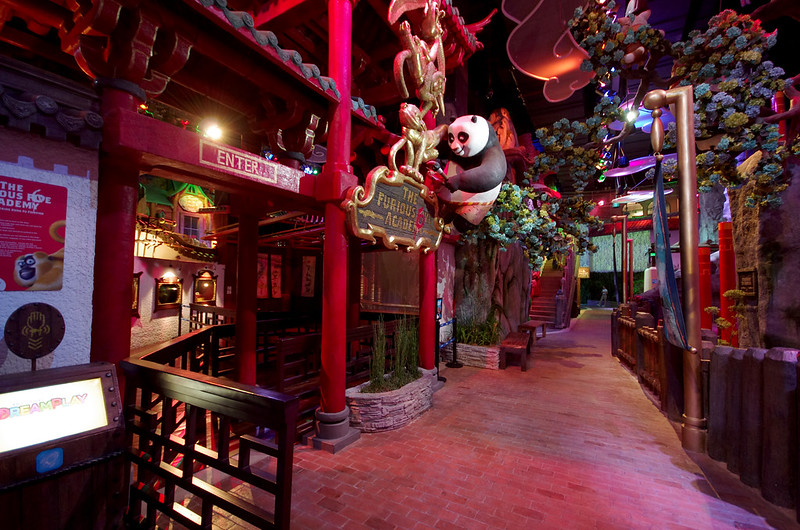 one of the many attractions in city of dreams manila

Dreamplay, an indoor theme park by Dreamworks, is also an interesting place to check out. I went in expecting to see kiddie rides but found it actually suitable for all ages. The attractions here are more mental stimulants than for quick thrills. It’s too bad I did not have enough time to check it out but next time, I definitely will!
Verdict
In terms of overall ambiance, my stay at Nobu Hotel Manila is easily the best I’ve experienced in Manila so far. Everyone knows how chaotic the city can be and it’s understandable that people would like to have staycations as a form of escape. In the escapism meter, I would rank this hotel a 10. The soothing and calming vibe of this hotel presents a direct contrast to city life. The Japanese theme is well-executed which makes it high in the uniqueness factor where hotels in the Philippines are concerned. With lots of in-room extras to keep guests happy, Nobu Hotel Manila lives up to its current reputation as one of the most popular hotels in Manila – especially for those who want to escape.