Manila has seen a spur of luxury hotel openings as of late and while many of the newer properties are housed in casinos, the Shangri-La at the Fort Manila has quickly become a popular venue not just for hotel stays but also for weddings, banquets and dinners at one of its many food outlets. Opened in March 2016, the property offers a good peek of the brand’s current interpretation of luxury. Many of the chain’s properties in the region – which are easily identified through their grand lobbies – have been around for decades and it’s been a while since a new Shangri-la property opened in Southeast Asia.

Shangri-La the Fort Manila is located at an exciting area of Taguig, one of the component cities of Metropolitan Manila. The hotel is just within walking distance from the pedestrian-friendly High Street in Bonifacio Global City. The building where the Shangri-La at the Fort Manila is located is a mixed-use development consisting of a hotel, serviced apartments, condominium units, a massive sports center and a shopping mall. Little wonder then that the hotel is very popular for staycations despite being one of the priciest hotels in Manila. 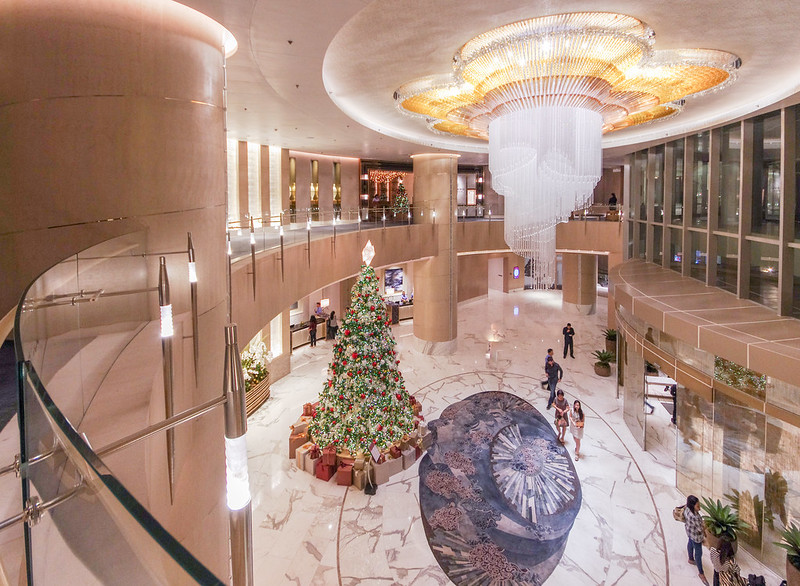 lobby of shangri-la the fort manila

Entering the lobby for the first time, the stark contrast from the usual Shangri-La hotels immediately became palpable. I no longer saw a grand welcome area dominated by thick columns nor was there an elaborate floral setup. The interiors here are admittedly more modern – making use of sleek curves in order to accentuate the open spaces. That being said, there is still a deliberate “Lost Horizon” theme permeating the public areas. Muted tones and artworks resembling clouds give one an impression of being somewhere in the exotic Himalayan mountains. 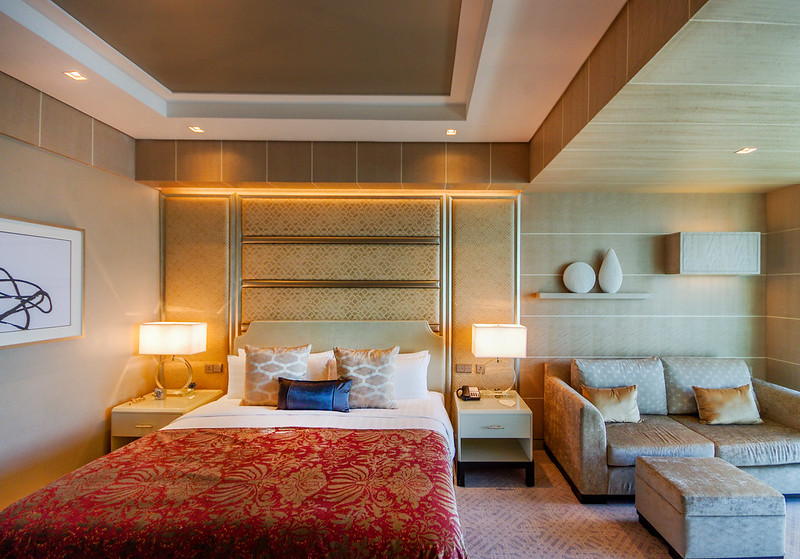 deluxe room at shangri-la at the fort manila

For this particular stay, I was billeted at a Deluxe Room. The property lays claim for having one of the largest base-level rooms in Manila – at 45 square meters. The room carried the same muted beige tones, similar to the public areas. Compared to the usual Shangri-La look, the interiors here were more elaborate with intricate patterns on the walls and contemporary décor that added character to the sleeping space. 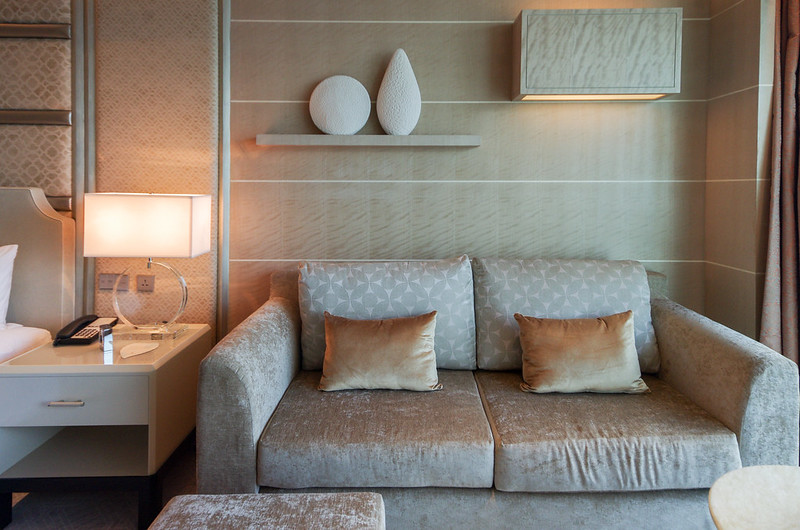 The room is large enough to even include a sofa next to the spacious king-size bed that in turn, do not block the window. The layout is not too different from the Ocean Wing Room at Shangri-la Mactan, sans the balcony. 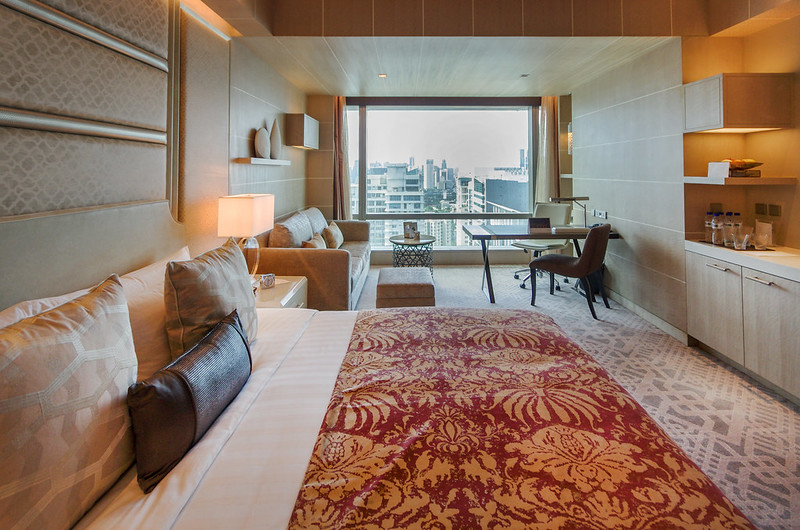 The working desk is situated in such a way that one’s back faces the window so if you are planning to get some work done in the day, you can very well rely on natural lighting. In the evening, a desk lamp brightens up the space. 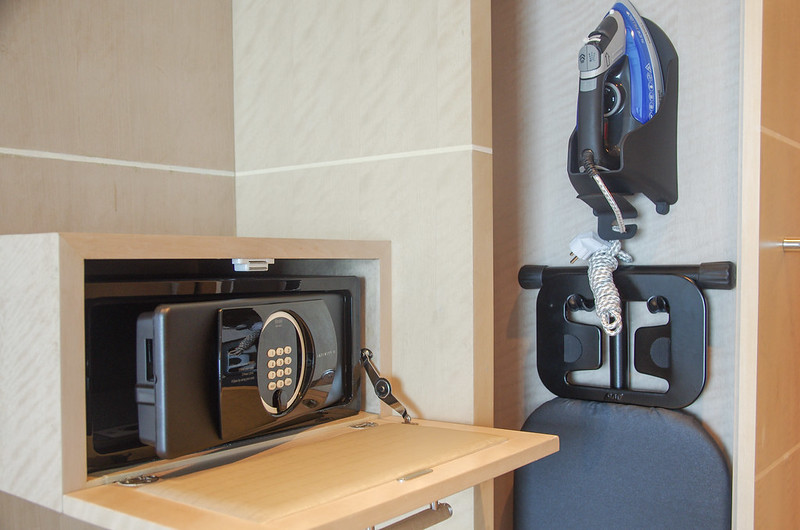 If you have a tendency to iron your clothes while staying a hotel (like me), you will be pleased that the ironing board is actually hidden inside a sliding panel instead of being thrown inside the wardrobe. 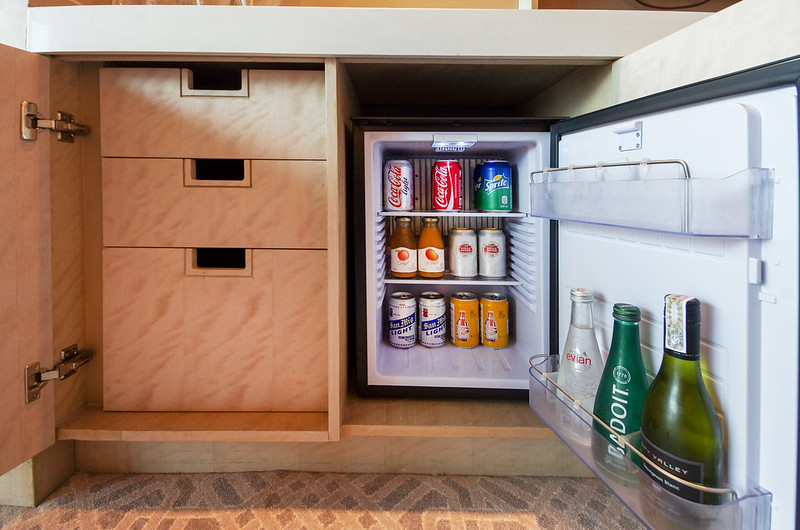 For late night hunger pangs, the minibar features a number of beverages including alcoholic ones as well as snacks. Since the clientele here mostly consists of staycationers, you won’t find bottles of wine (or champagne) but one could easily be had downstairs. Bottled water was provided generously. I counted no less than 8 bottles of water in my room when I entered! 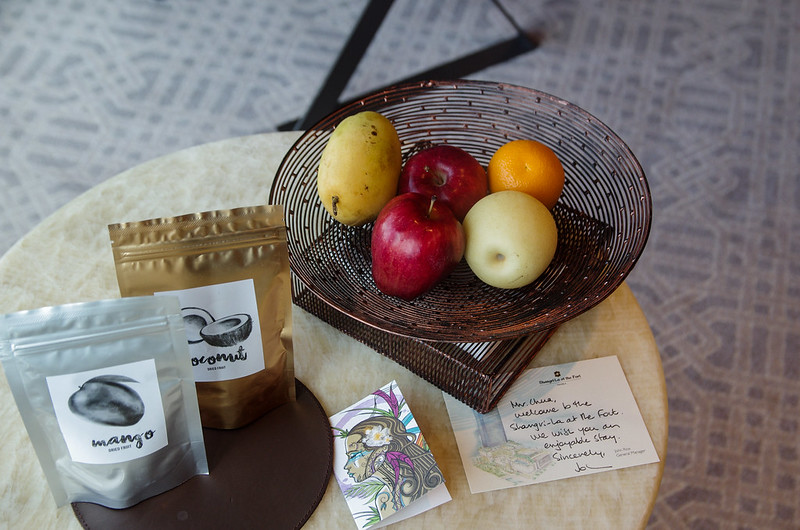 welcome amenities at shangri-la at the fort manila

I had gone out for dinner in the evening and came back to find that someone had already come to the room to do turn down service. I was given a new set of toiletries while my bed was prepared for the night. However, I noticed that there was no bookmark left on the bed nor were there cookies placed by my bedside unlike my experience with Shangri-la properties elsewhere. I am not sure but perhaps this is not being practiced in this property. 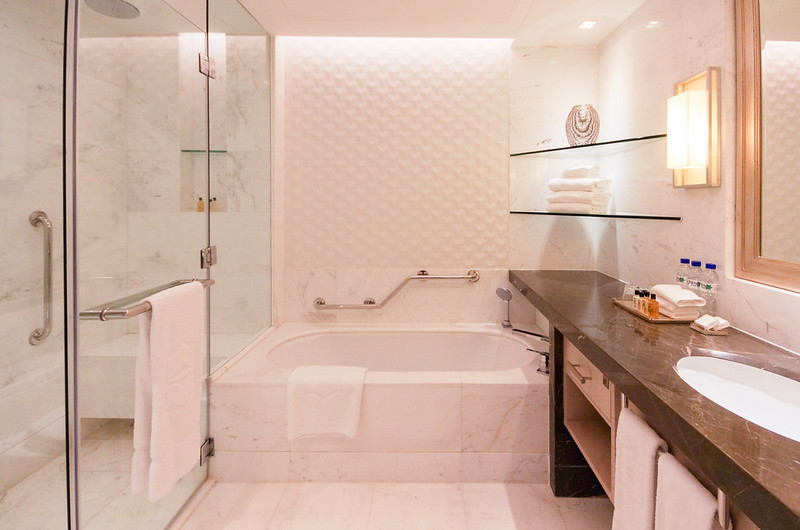 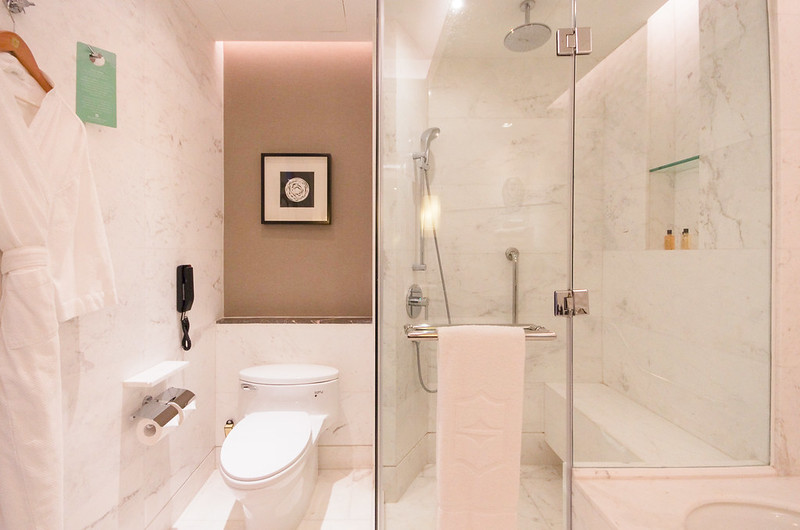 The bathroom is lined with marble panels, giving it a clean look. Like the newer (and retrofitted) Shangri-La hotels, the bathroom came with a tub and separate shower area. The latter even has a bit of space to allow you to sit while enjoying the rain shower feature. 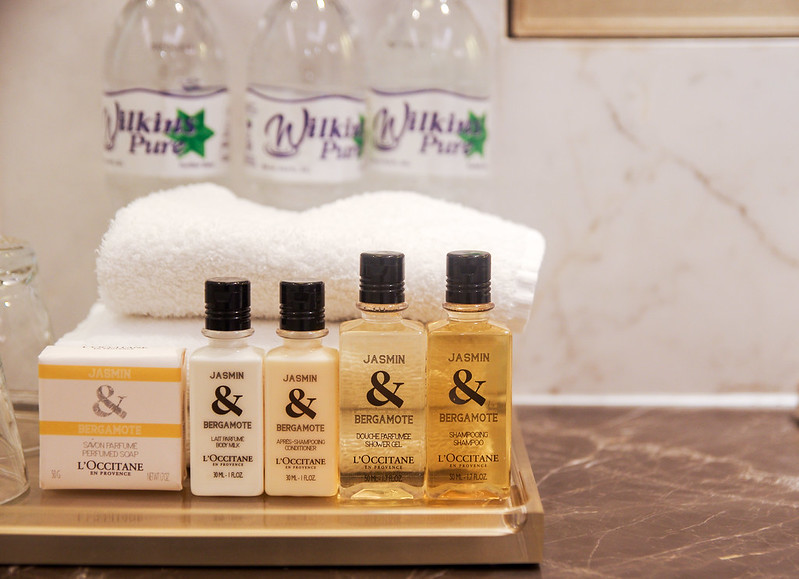 Toiletries came from Jasmin & Bergamote by L’Occitane which was pleasantly surprising as Shangri-La normally uses in-house branded toiletries for base level rooms. 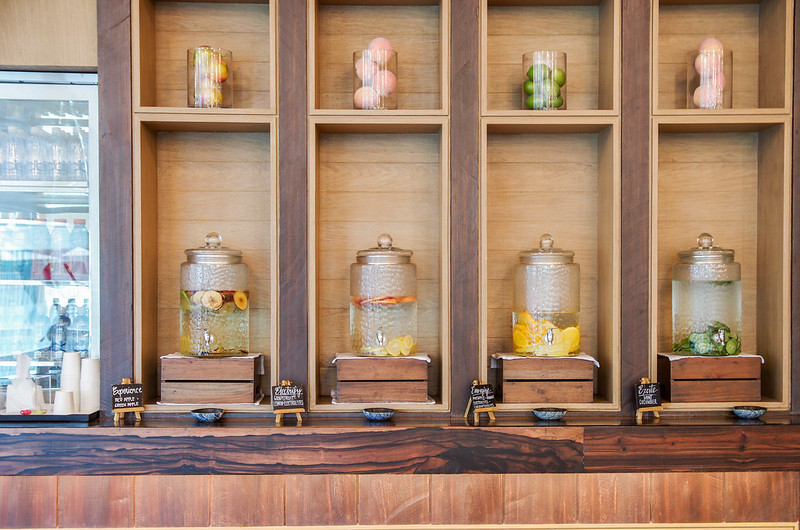 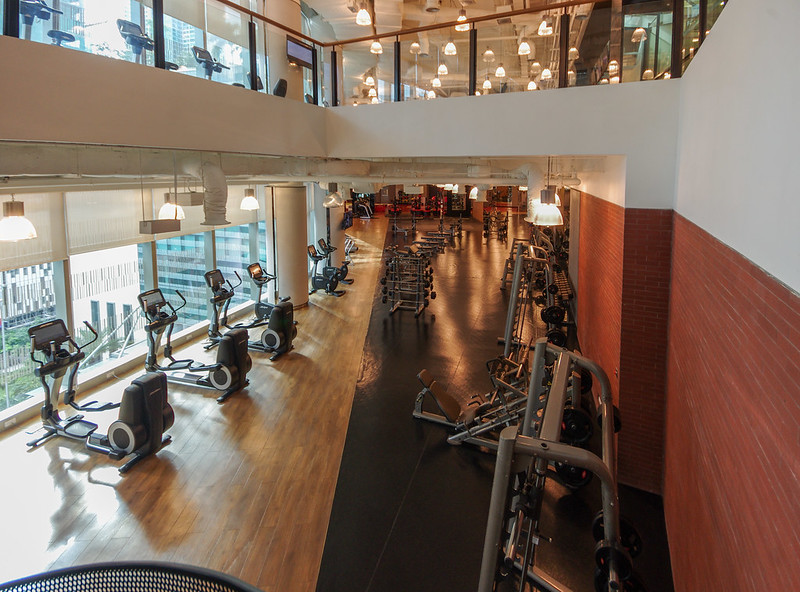 One of the things you should do when staying at Shangri-La at the Fort Manila is to workout in the massive Kerry Sports Center Manila which is free for hotel guest use. The gym consists of two levels and is probably the largest hotel gym I have seen anywhere. 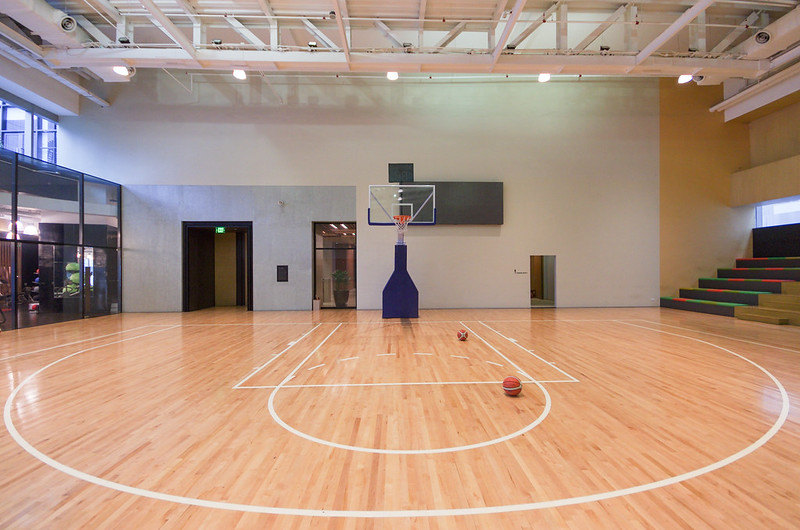 To add to that, there is also a basketball court, tennis court and squash courts. During my stay, the hotel’s own swimming pool was not open yet so guests were directed to Kerry’s own pool for dips. 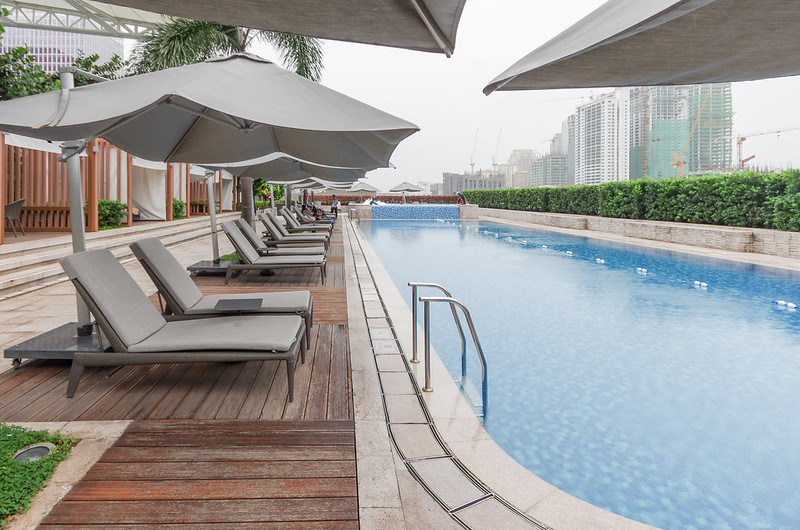 In terms of dining options, the property departs from your usual variety consisting of just Japanese, Chinese and all-day dining restaurant. While it also offers these (except for the Japanese restaurant), you can also find a steakhouse and even a Peruvian restaurant! Make sure to sign up for Golden Circle in order to qualify for points coming from The Table. 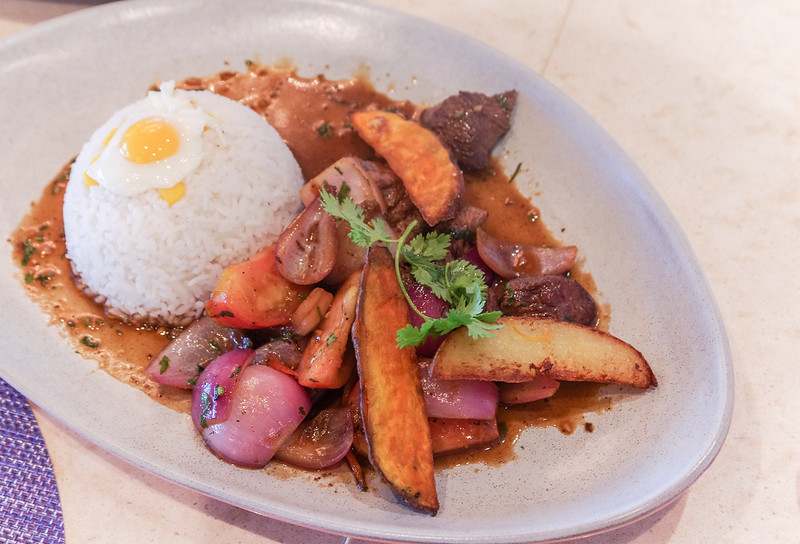 My stay came with breakfast at High Street Café which offers a great variety for one’s morning meal. The massive dining space and number of buffet stations in a way reminded me of The Line at Shangri-La Singapore. 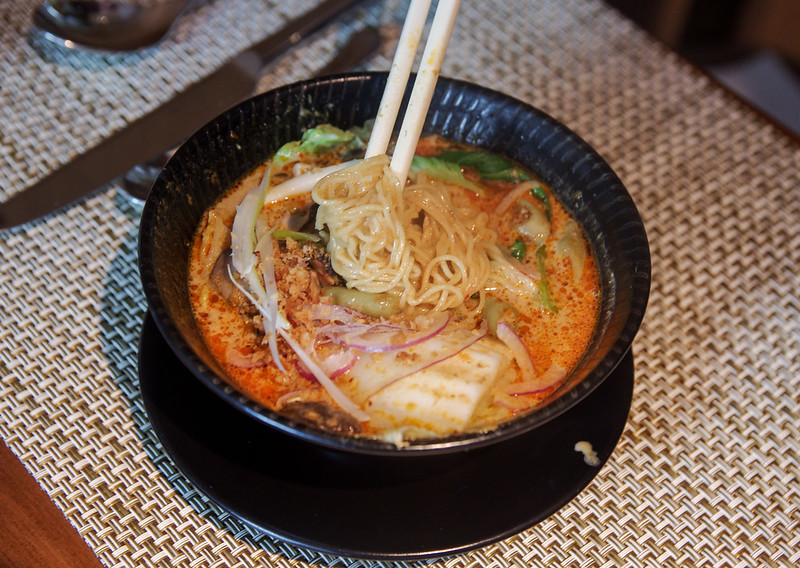 There were other things that reminded me of Singapore other than the extent of the buffet. One of the specialties here for breakfast is the Laksa which tasted quite authentic with the rich coconut gravy. 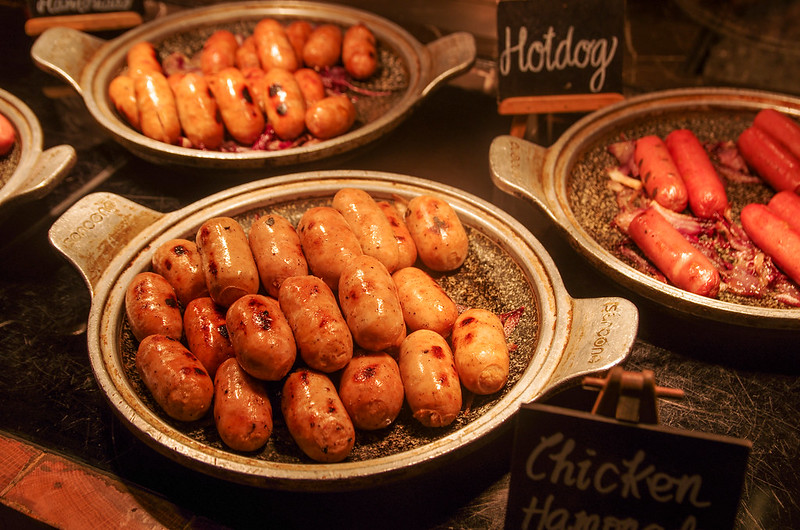 There are a number of western items in the buffet, so much so that there is even a station dedicated just to sausages! 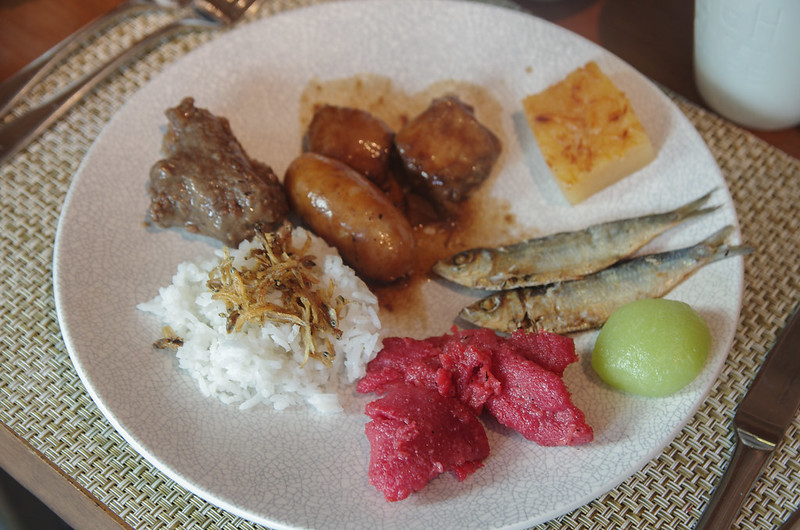 My attention however was channeled towards the Filipino counter. While you do get to see Filipino items for breakfast in the other Shangri-La properties in the Philippines, I thought there was a relatively wider selection here. Other than your standard garlic rice, dried fish (tuyo), adobo, tocino and  beef tapa; I also spotted the likes of suman, pitchi pitchi, cassava cake and even ensaymada. 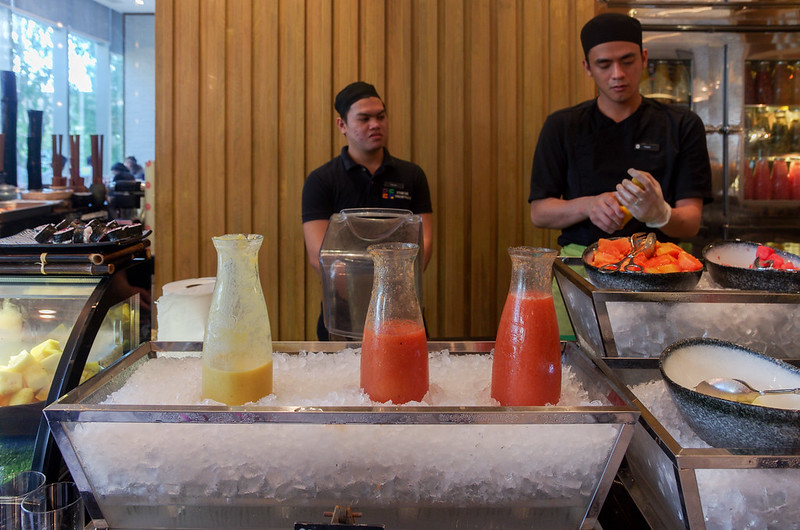 A good hotel breakfast buffet will always feature fresh juices. It’s been three years but I still have fond memories of the fresh juices offered at Makati Shangri-La. High Street Café does not disappoint. I managed to grab myself a nice glass of tropical smoothie. For those who want something more conventional, you can pick a fruit of your choice and ask the staff members at the counter to whip up a juice for you.

The Shangri-la brand has always been strong in the Philippines as it is one of the few luxury chains that remained in the country despite the political instability that occurred in the past. Today – as chains such as Hyatt, Accor and Hilton seek to reenter, it is reaping the rewards of that decision by being top-of-mind where luxury hotels are concerned. The Shangri-la at the Fort Manila lives up to that reputation with a solid hard product that is one of the city’s most impressive.