Dapitan City in Zamboanga del Norte has long been in my bucket list of places to visit in the Philippines. This town in the northern part of Mindanao has long been under the tourist radar although it has been featured in quite a few publications over the years. Dapitan City is most well-known for being the place of exile of Philippine national hero, Jose Rizal, and has plenty of historic sites for visitors to explore over a weekend. The city is also known for Dakak, a beach resort which has managed to capture the imagination of local tourists due to heavy promotion back in the 1990s.

During a recent trip across the northern coast of Mindanao, I finally had a chance to visit Dapitan. I was able to cover both this city and the neighboring town, Dipolog City over two days. These were the places I visited: 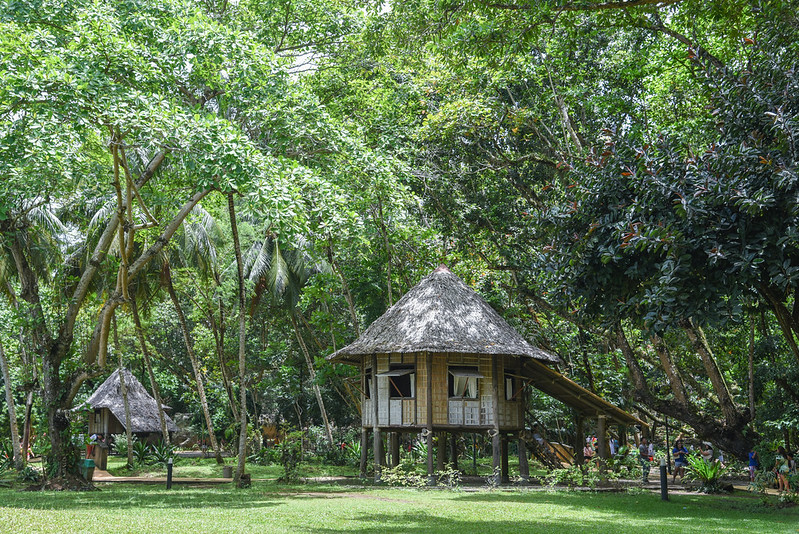 A sprawling property which Jose Rizal stayed in for 4 years during his time in exile in Dapitan, the Rizal Shrine offers a insightful peek at the life and times of the Philippine national hero. You can find a couple of nipa houses (built without using a single nail) which served as Rizal’s residence, clinic as well as lodgings for his students and patients. Among these houses, the most picturesque one is the Casa Redonda, the octagonal house which served as Rizal’s clinic. It is also the first house you see as you enter the park. You will also find a large rock in the middle of the park where Rizal wrote the famous poem Mi Retiro (My Retreat). 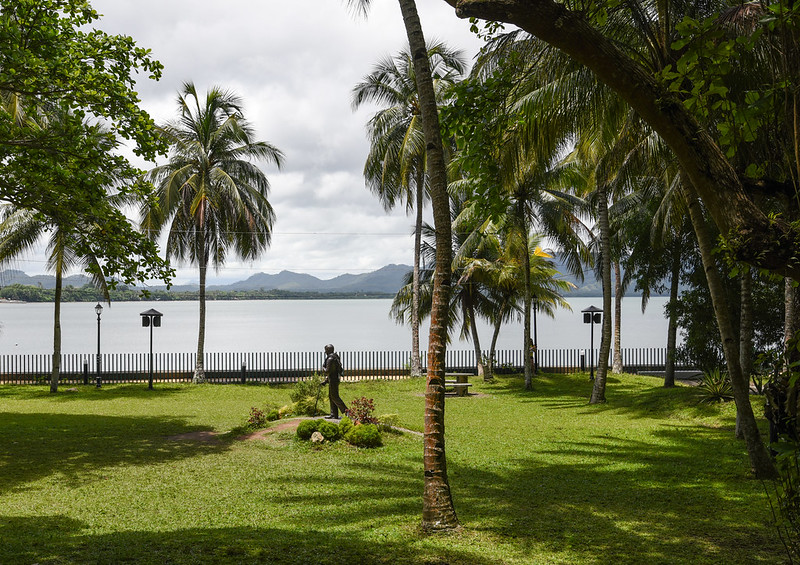 There is also a museum located in a 2-story building inside the park. Inside are some artifacts belonging to Jose Rizal such as his pajamas and medical equipment. The museum itself is nicely done with plenty of interesting dioramas but there’s not much of an upkeep. At the time of my visit, the air-conditioning was not working and my guide pointed out that it has not been working for months.

Admission: Free, tour guides are situated by the entrance and are paid with tips. 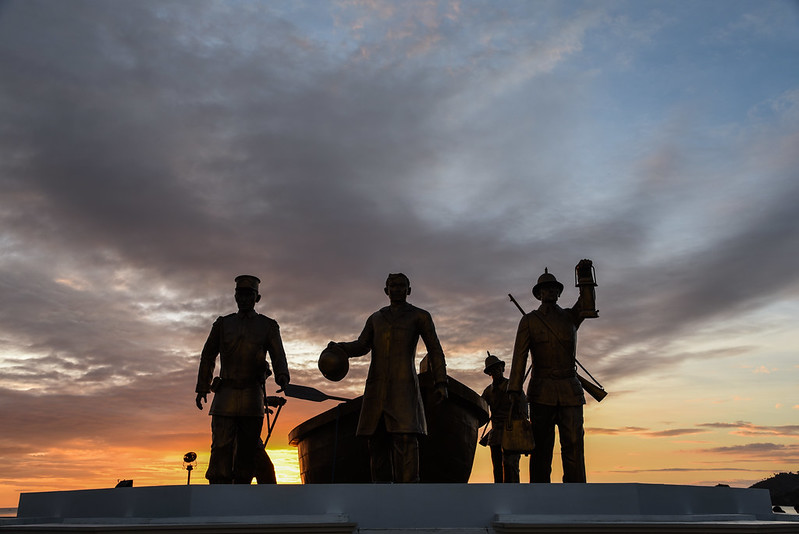 Not to be confused with the Rizal Shrine, the Rizal Landing Site is located along Sunset Boulevard and is where Rizal’s ship docked when he arrived in Dapitan. It is a great place to watch the sunset.

Go on a cruise along the river 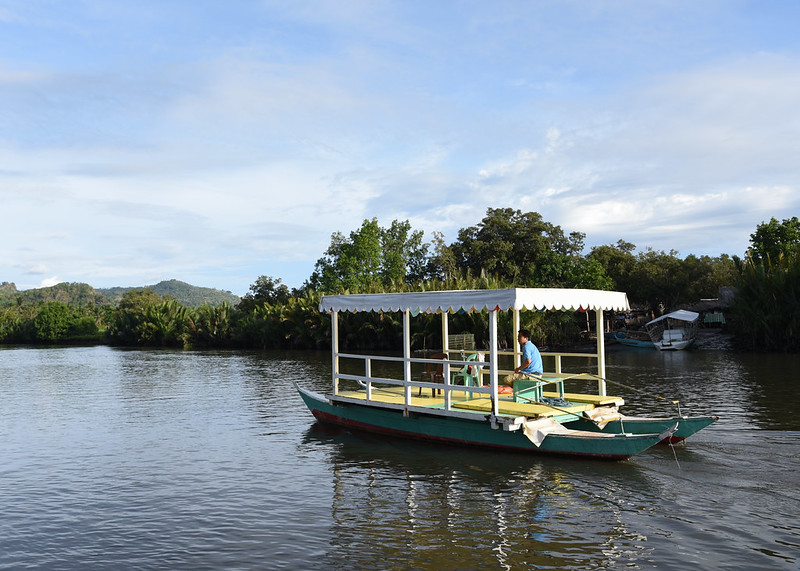 Similar to what you’ll find in Bohol, Dapitan has its own river cruise attraction. Trips occur daily with two timings – 11AM and 4PM and are approximately 1.5 hours each trip. It takes you on a slow journey along the quiet Dapitan River and is inclusive of an overpriced buffet. The trip is really more for sightseeing and for witnessing local life than anything else. While it is practical to book the 11am trip – in order to watch the locals doing their afternoon chores along the river, the 4pm trips are more interesting. As the sun starts to set, the currents start to fade, giving off nice reflections as you end your day. 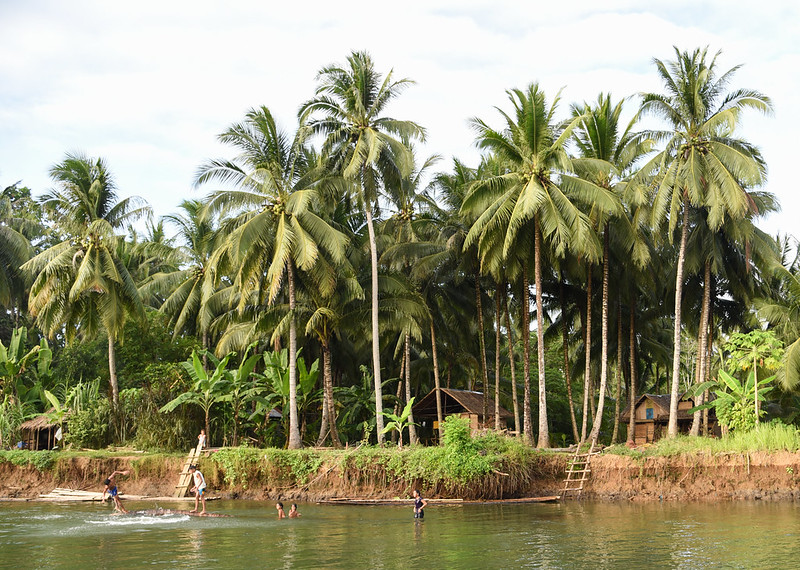 Opening hours: Daily, 11am and 4pm 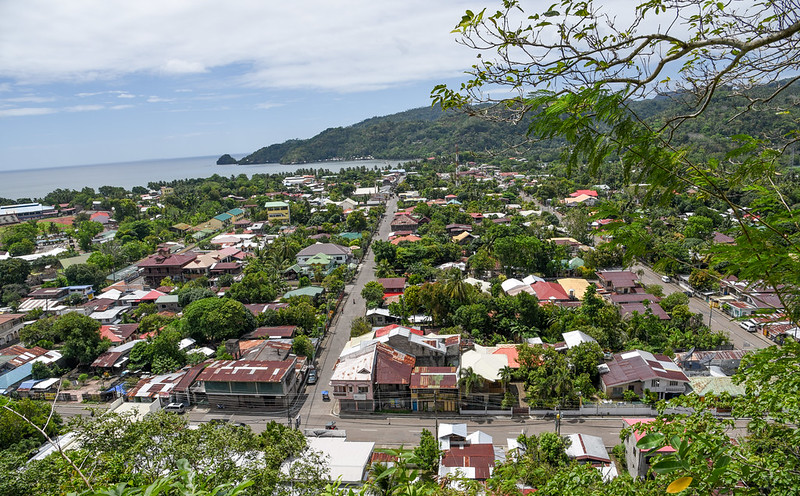 Climb the 200+ steps behind the St. James Church and find yourself on top of Ilihan Hill from where you can get really sublime views of Dapitan City. Best time to go up is late afternoon around 4PM .

How to get there: You will find the steps a block away from the rear of St. James Church along a street called Maria Uray Lane 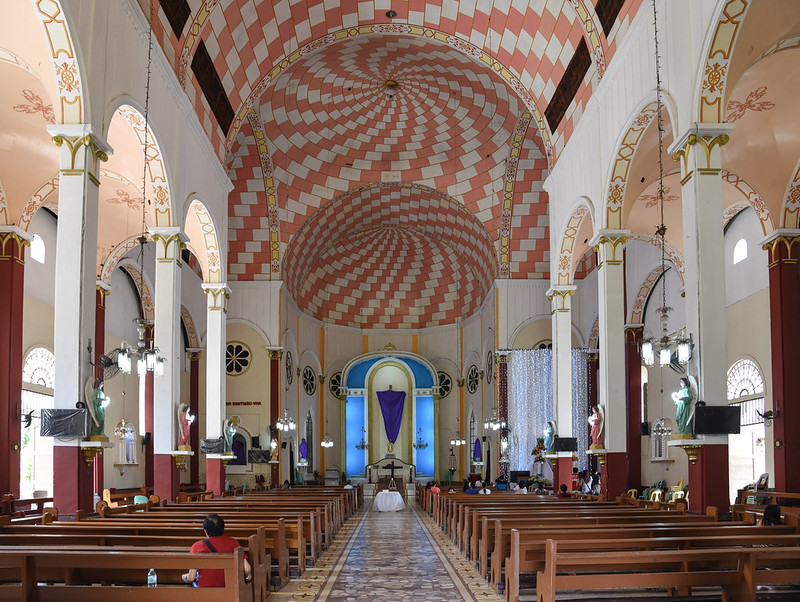 A visit to Dapitan City is definitely not complete without a short stop at the St. James Church. The exteriors are deceptively bare but head inside to marvel at the vibrant ceiling with the distinctive spiral design. Jose Rizal attended mass here during his years in exile in Dapitan but had to stand outside as he was excommunicated by the church. A marker is now situated at the spot where he used to stand while attending mass.

Walk along the town plaza 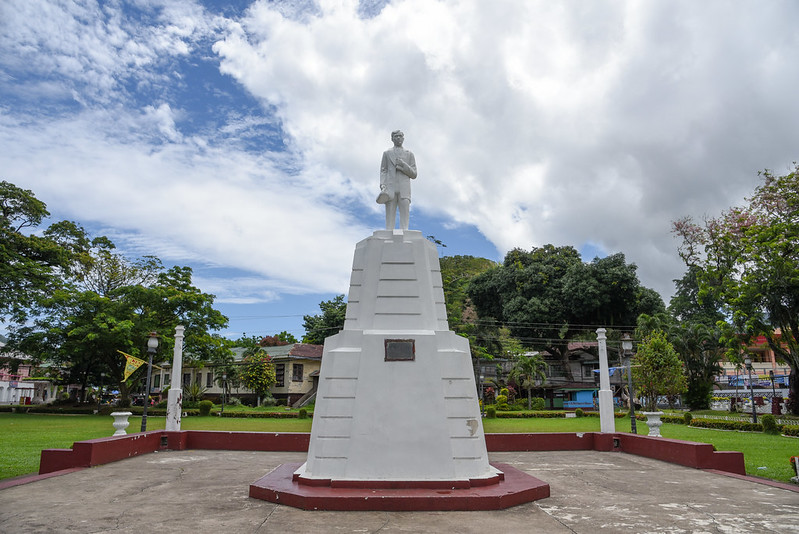 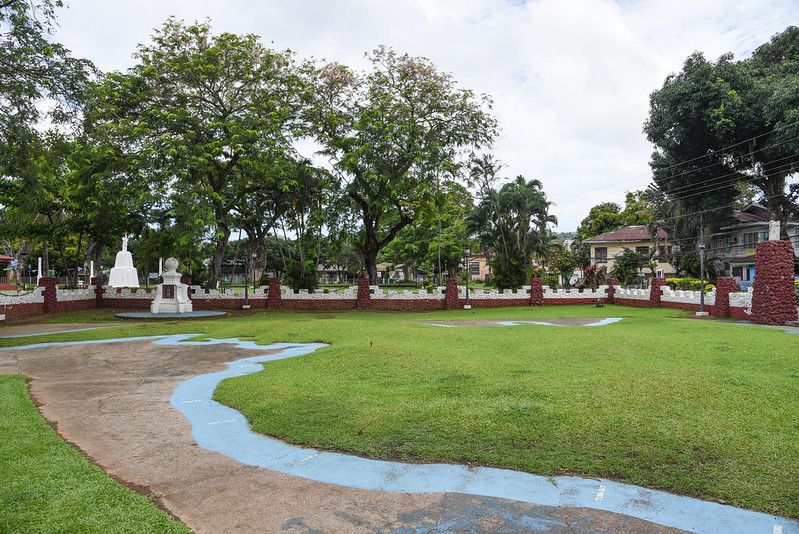 The town plaza which is situated just outside the St. James Church is a pleasant spot filled with lot of greenery. You will find a relief map of Mindanao here which is better appreciated by climbing the bell tower of the church (if it is open). Rizal was said to have played a part in beautifying it in the 1890’s and today a monument to him is placed at the center of the park.

Marvel at the historic houses 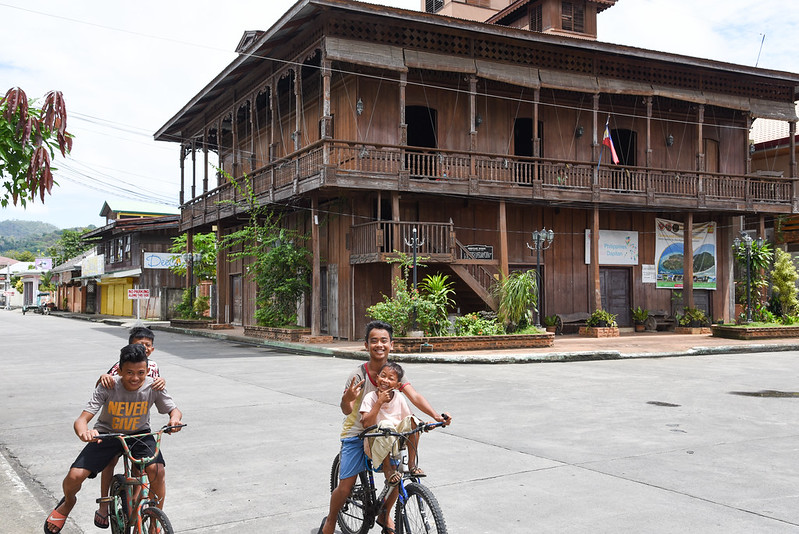 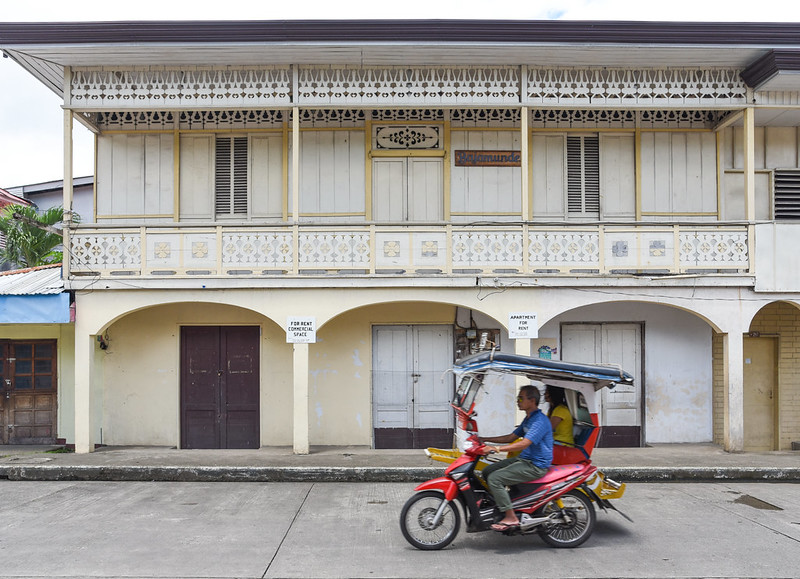 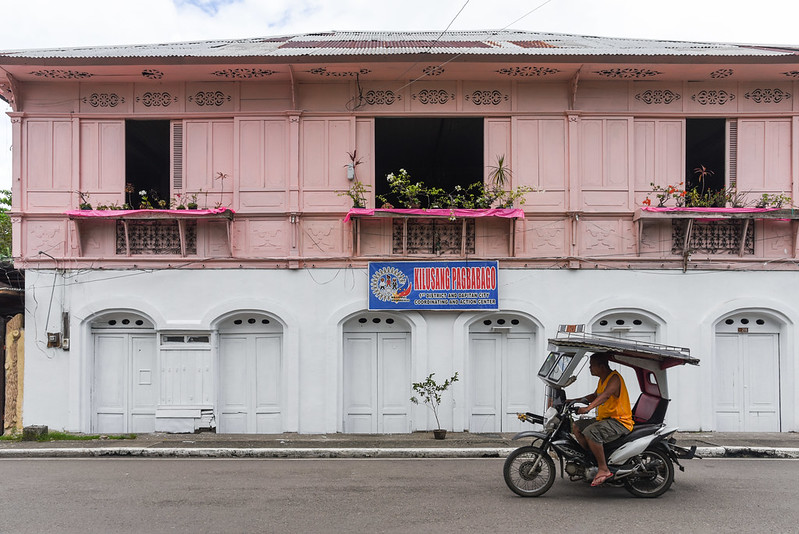 Dapitan is a very quiet place and one would be forgiven to think of it more as a large town rather than a city. Step back in time as you visit turn-of-the-century ancestral houses and you may very well find yourself the only tourist. The most notable among these houses are the Adasa House and the Corazon de Dapitan, the latter easily identified across the town plaza due to its pinkish shade.


For more of Dapitan, you can also check out the famous Dakak Beach Resort. You can either stay there for the night or go on a day visit for Php 1,000 per head, a fee which you can also use to purchase food and for various activities within the resort. If you are bringing the kids along, you can also check out Gloria’s Fantasyland in the evenings. For a town with barely 100,000 people, it is quite interesting to see a full-fledged theme park actually thriving here.

Where to stay in Dapitan: While there are small hotels around the town, I opted instead to stay in Dipolog City where there are more reasonable accommodation options. I stayed in D Hotel and Suites, probably the most value for money hotel within the Dapitan and Dipolog area when considering the price versus comfort.

Morning
Drive to Dapitan (assuming you are staying in Dipolog like me)
Visit the historic houses
Go inside the St. James Church
Walk around the town plaza
Go for the river cruise (11am)

Afternoon
Laze around or try the activities in Dakak Beach Resort (day visit)
Visit the Rizal Shrine
Climb up Ilihan Hill (around 4:30pm)
Catch the sunset at the Rizal Landing Site
Dinner at Kamayan ni Manay