On a recent trip back to Singapore from Beijing, I had a couple of flight options. I had wanted to take the 777-300ER flights initially, hoping I would land on one of the refurbished planes but as the flight time was not very convenient (departure was at 00:05), I opted to fly business class on the Airbus A380 instead. SQ807 from PEK to SIN had a more reasonable departure time of 4:40pm with an arrival time in SIN 40 minutes before midnight. Total damage was 29,750 miles thanks to the pre-devaluation 15% discount for online redemptions. 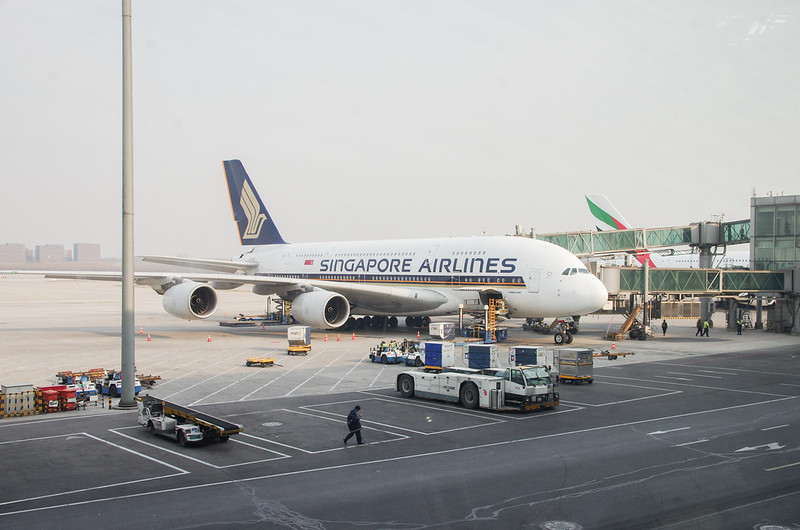 the singapore airlines a380

There was no queue when I checked in my bags at the SQ counters at Beijing Capital Airport. However, getting through immigration and security clearance was a different matter altogether. By the time, I finished having my carry-ons checked, I only had about an hour left and instead of going to the appointed business class lounge for Singapore Airlines flights which was the BGS Premier Lounge, I opted to go instead to the Air China First Class Lounge in Terminal 3 which was a designated lounge for Priority Pass holders. 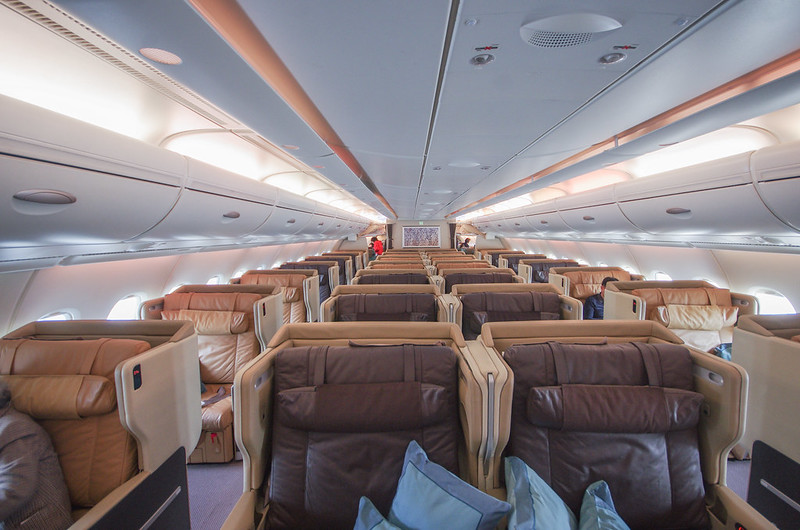 business class cabin on the a380 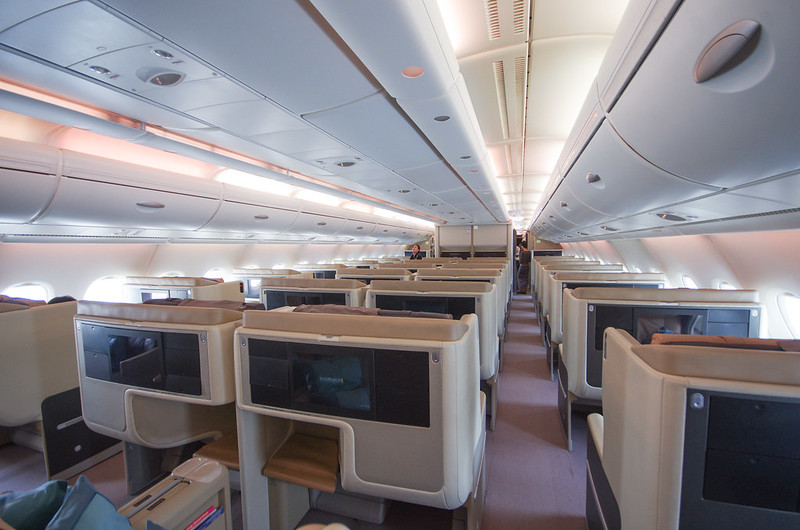 Business class on the A380 is located at the upper deck of the plane and has two cabins. The forward one is more intimate with 18 seats while the one behind has 42. I had at first wanted to sit in the forward cabin – thinking the service would be better with fewer passengers – but I could not find any more available window seats. In any case, that decision ultimately did not matter much as the business section was only around 30% full during my flight with the bulk of the passengers in the forward cabin! 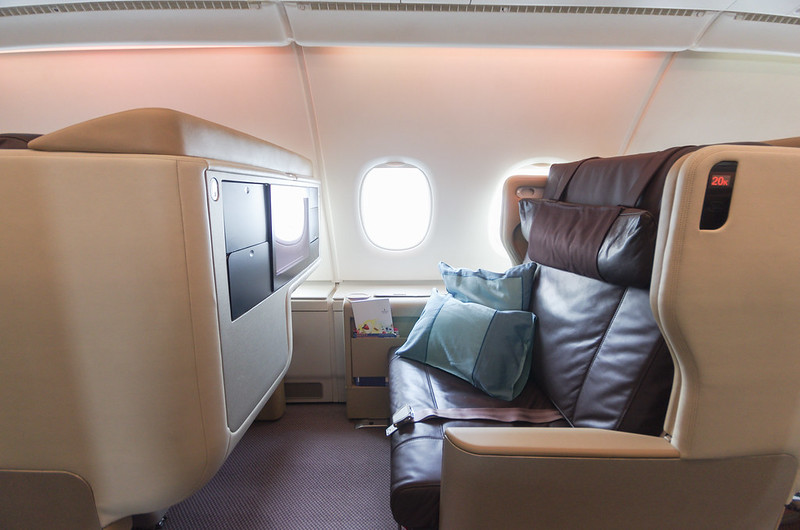 The seats are arranged in a 1-2-1 configuration and carry a seat pitch of 55 inches and width of 30 inches, rendering SQ with what is still one of the widest business class seats out there among major airlines (in comparison, Emirates only has a width of 18 inches for business in their A380). Upon taking my seat, the stewardess approached me and addressed me by name (a nice touch!). I was politely offered a selection of newspapers and magazines as well as welcome drinks and nuts. I was also told that due to regulations in Beijing, they were not able to offer me pre-flight champagne. 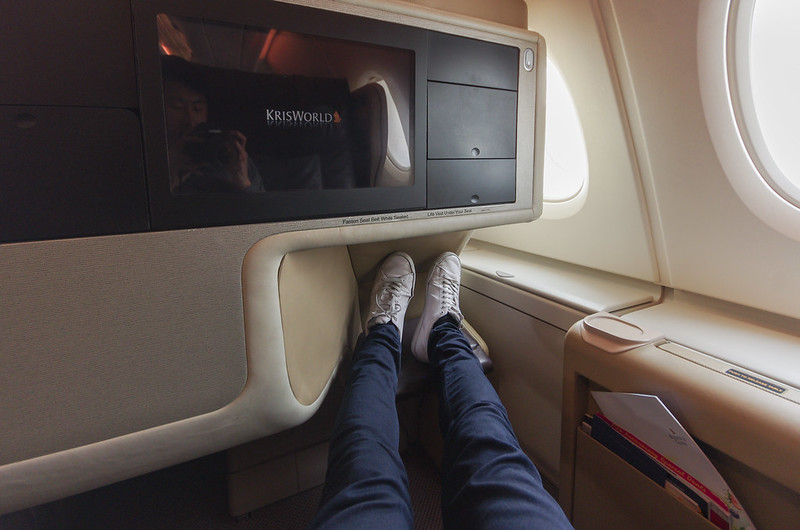 As is the case these days with most business class seats, the leg rest is situated at the far corner of the seat and to access it, you need to sit diagonally. An instructional video prior to take-off shows how the seats can be easily turned into a flatbed – by activating a latch behind the backrest. 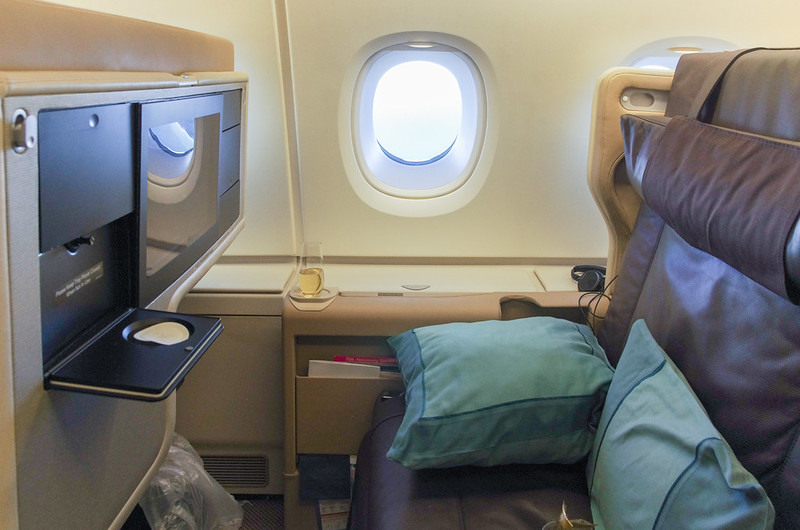 plenty of storage space – including the massive bin beside the seat (only for window seats!)

The seat carried plenty of storage space. Even though the business class cabins on the A380 came with overhead storage space, I love how convenient it is to stow away one’s belongings on the massive storage bins beside me (a plus when you get a window seat). 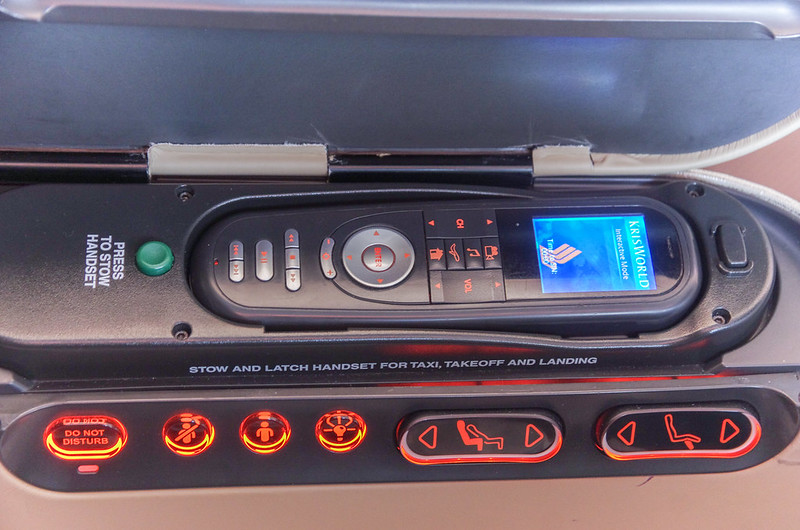 A control panel allows one to adjust the backrest and legrest. Compared to SQ’s regional 777-200 retrofitted planes, they’re also a lot more intuitive with only four buttons to choose from. 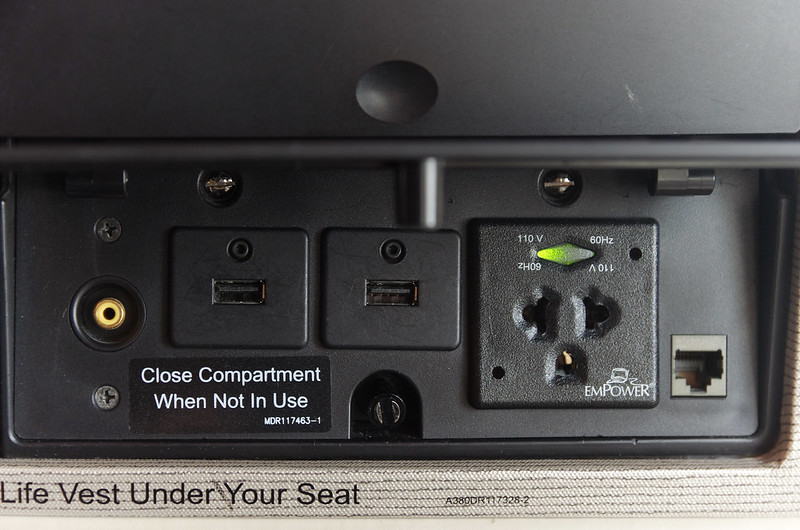 I also found a power outlet and a couple of USB ports by the armrest. If like me, you spend way too much time tinkering with your phone or taking photos, you’ll find the power supply to be a godsend. 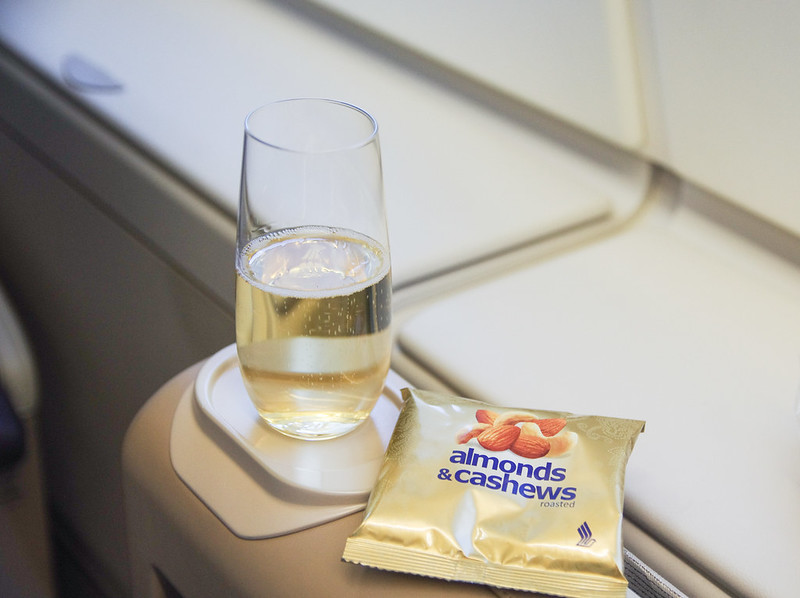 glass of champagne and nuts after takeoff

Prior to this flight, the longest I’ve ever been on a premium cabin in Singapore Airlines was on the Suites flight when I first arrived in China the week prior. That was a morning flight and hence, I only got to see the breakfast service. All my other business class flights with SQ prior to this were short-haul and as such, this was really my first time to have the full dinner experience on business class.

A quick flip through of the flight menu showed that the meal was to consist of  7 courses. For this particular flight, I availed of the “Book the Cook” service and got myself a local specialty – Beijing-style barbecued pork spare ribs with egg noodles. 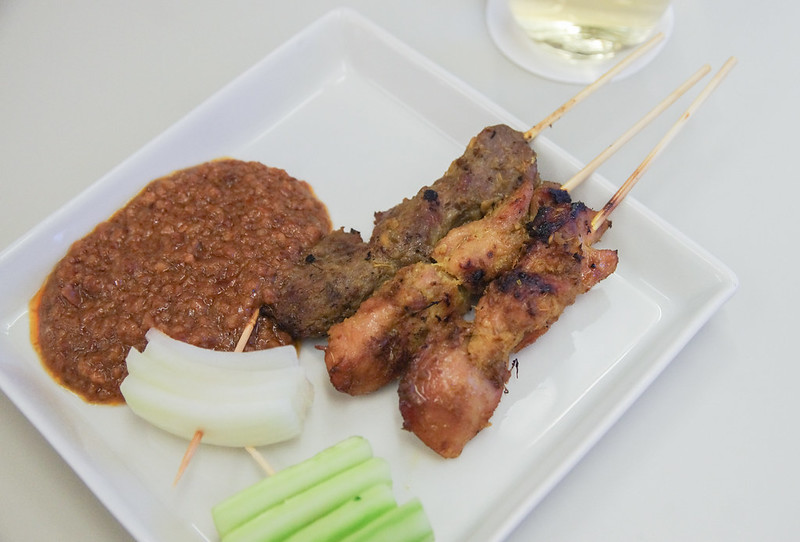 The meal started with a selection of Singapore Chicken and Lamb Satay. I only expected to see this for flights departing ex-SIN so definitely a pleasant surprise. It went down very nicely when paired with the Charles Heidsieck Brut Reserve Champagne. 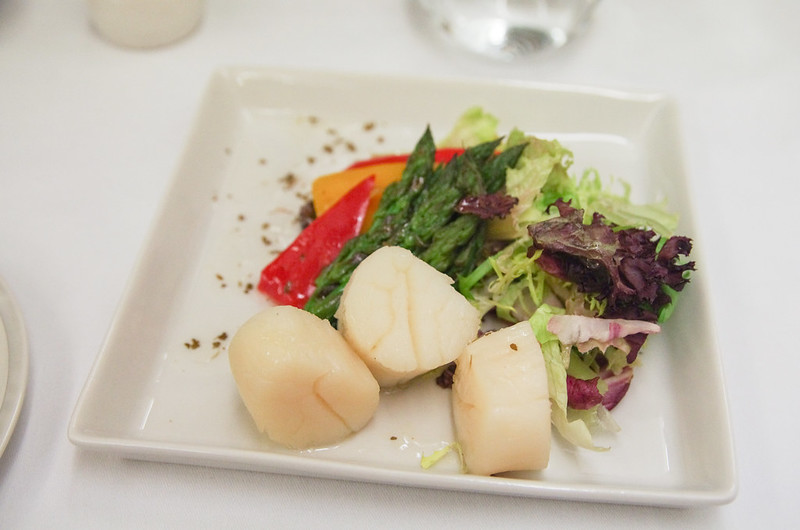 This was followed with Marinated Scallops served with a dash of fresh greens. The scallops came plump and the deliciously tender texture was almost hard to believe for a meal service 30,000 feet up in the air. It’s definitely a huge step up from the salads I’ve encountered in the short-haul flights. 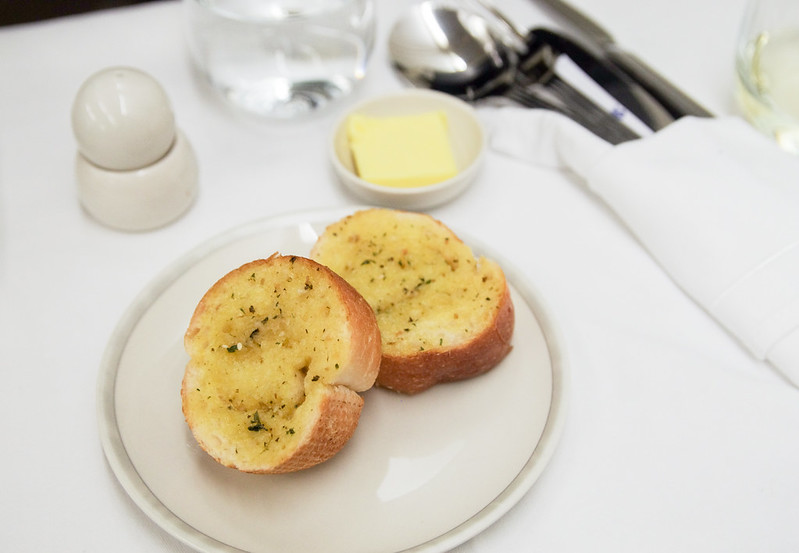 from the bakery – garlic bread

The garlic bread is to me, one of the best things about business/first class on Singapore Airlines. These crunchy and incredibly delicious pieces of dough have gained a cult following over the years and I personally look forward to them whenever I have the chance to fly on J or F. When the stewardess came by with the bread basket, I didn’t even have to choose. Garlic bread it was! 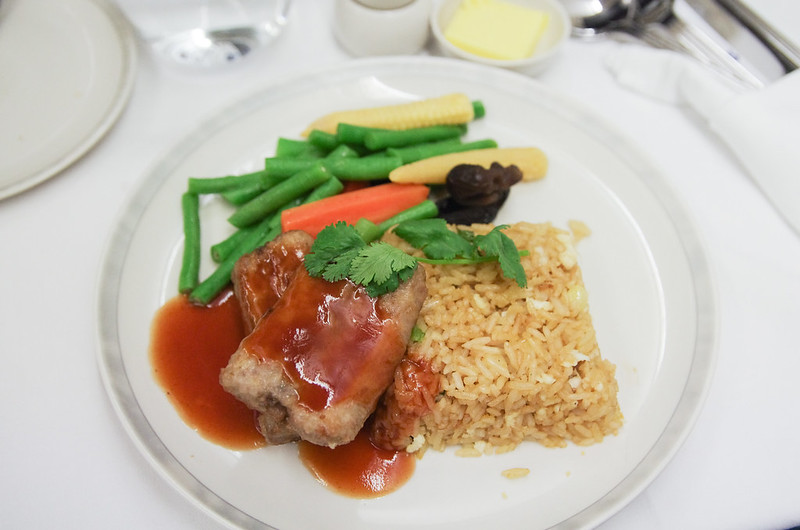 For mains, there were three choices in the menu for those who did not reserve anything from Book the Cook. For some reason, I ended up getting Oriental Jing Du Style Pork Ribs. Before I managed to get a closer look at my main, the stewardess came to me and apologized for serving the wrong dish. However, since the pork ribs were already served to me, she let me keep them and she still served my Book the Cook option after that. I was impressed by the service recovery. Plus, it’s not too shabby to end up with two mains. The pork ribs were succulent with a tinge of sweet sauce that went nicely with rice. 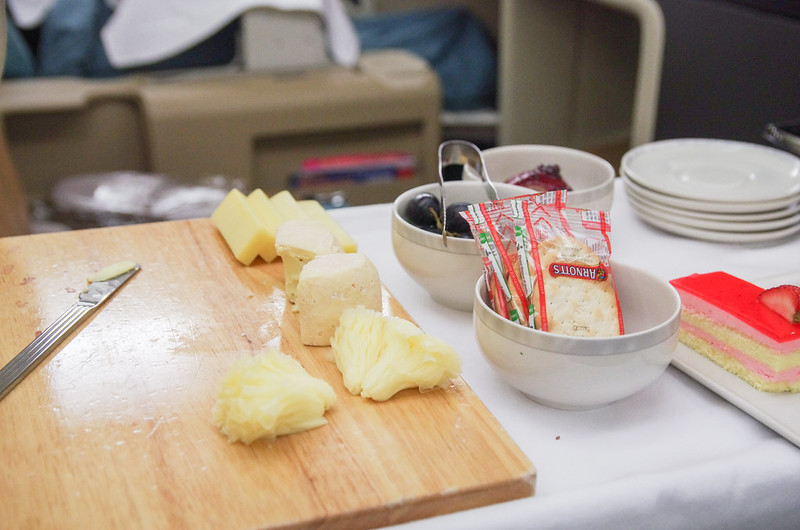 Before I could even finish devouring the pork ibs, the crew came by once more with a trolley containing a variety of cheeses and fruits. By this time, I was starting to feel the effects of the two mains I had. Good thing, too, that the cheese did not come in individual servings, enabling me to easily say no. 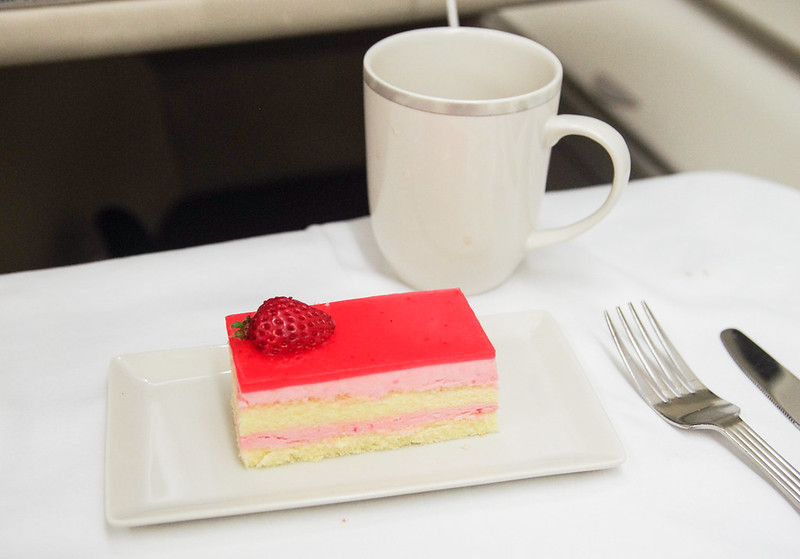 For dessert, I was made to choose between Haagen Dazs Belgian Chocolate Ice Cream or Strawberry Mousse Cake. I’ve been having this mousse cake ever since my first J class flight with SQ nearly a decade ago so no question, I was having cake. 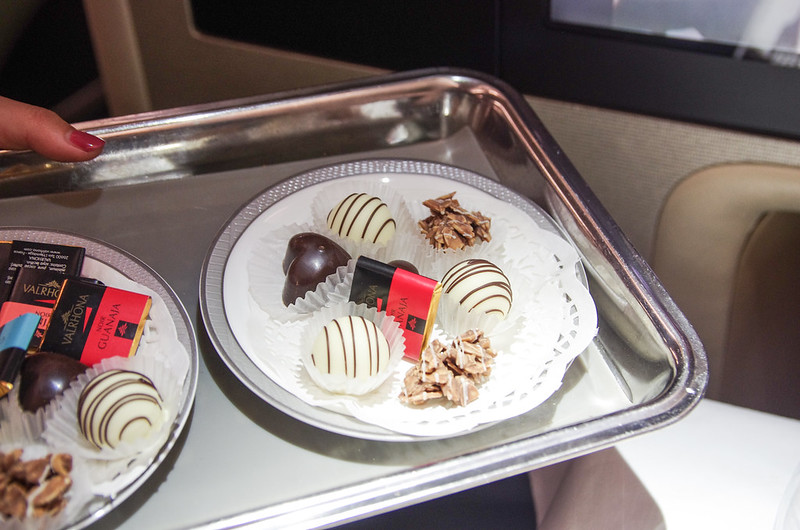 But no, meal service by was not yet over after desserts. One of the crew members came by to offer chocolates. It looked tempting but again, I had to decline even the heart-shaped ones. 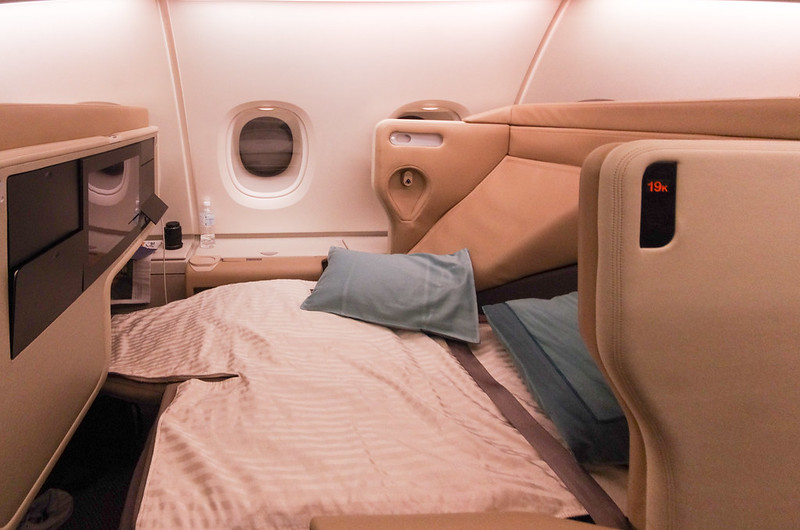 the a380 business class seat when turned into a bed

As there were still a couple of hours before the plane landed, I decided to turn my seat into a bed. Setting it is relatively easy – you just activate the latch to move the backrest down. Support it against the leg rest at the other end of the seat and you have your very own flat bed in the sky. 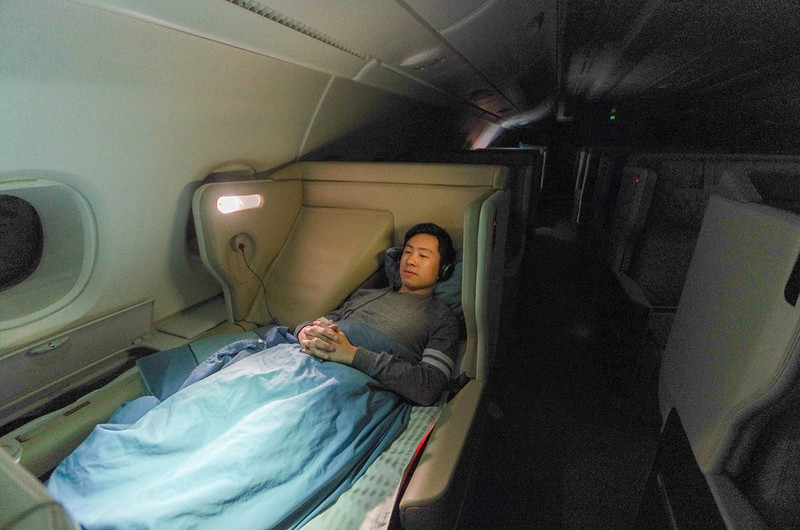 As mentioned previously, SQ has one of the widest business class seats and this can be pretty much felt at the lower parts of the bed when it extends almost up to the full width. Just be mindful of the slit that divides the seat and the storage bin beside it. It’s quite narrow but it’s still big enough for things like pens and mobile phones to fall so save yourself the hassle and store your belongings in the drawers. 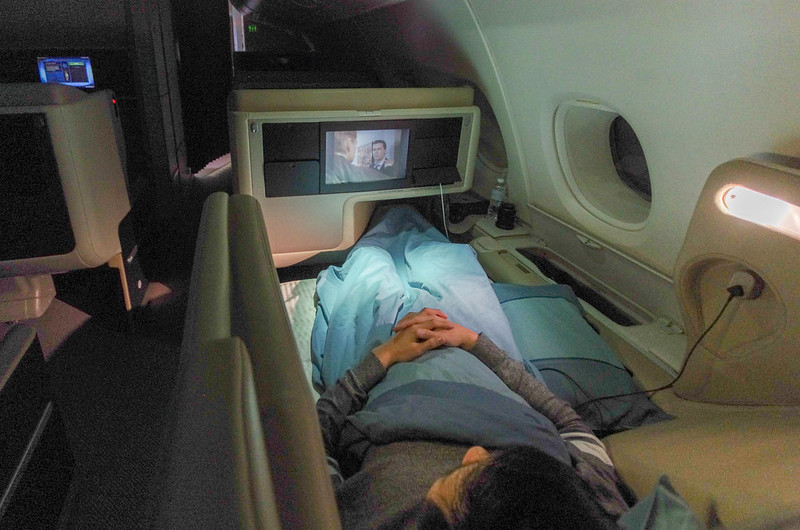 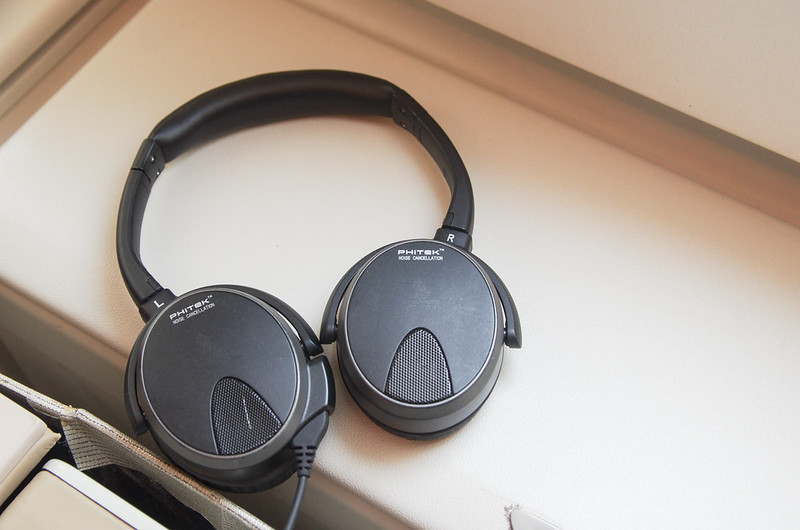 I enjoyed a bit of KrisWorld before falling into a deep slumber. Before I knew it, the lights came back on and I heard the voice of the pilot announcing that he was about to make a descent into Singapore.

Overall, I enjoyed this A380 business class flight with Singapore Airlines immensely. The seats were comfortable – it’s still one of the widest out there for business class. The food was also delicious – it was my first J class flight with SQ that exceeded 3.5 hours so it was also my first time to try the full dinner offering. The crew was also very good and efficient. I was consistently greeted by name and checked upon regularly throughout the flight to make sure I had everything I needed.

I’ve always loved taking Singapore Airlines primarily because I already feel like I am in Singapore as soon as I step foot on the plane. After several days of traveling in sub-arctic conditions in Mongolia and staying in Beijing for a couple of days, it was definitely a nice feeling to see that familiar uniform. As I have now tried J class on both the 777-200 retrofitted planes and the A380, I’m hoping to try the A350 very soon!

Which seats to get for business class with Singapore Airlines’ (SQ) A380s?

The bulkhead seats give you a much wider leg space and you won’t need to lie diagonally. As such, I would recommend getting a bulkhead seat. Also, getting a window seat is advisable due to the presence of extra storage bins beside the seat. As such, I would recommend getting the following seats if you can: 17A or 17K which are window seats with the full leg space. Next to this, 11A or 11K also give the same benefits but the downside is that you lack a window. Do note that these are my suggestions for the 4-class A380s with two business class cabins. There is another version of SQ’s A380s with three business class cabins.