The thing I like best about flying with Singapore Airlines is that regardless of where I’m departing from, I get the feeling that I’m already in Singapore – with the efficiency, safety and cleanliness that comes with it – the moment I step foot on the plane. As I had plenty of things to bring back with me during one of my Singapore to Manila sojourns, I decided to book myself a Business Class ticket. I booked this online using miles with the 15% online booking discount. Total damage was 17,000 miles or around S$100 (~US$80) which was not too bad compared to a one-way economy flight on miles which went for 10,625 miles. 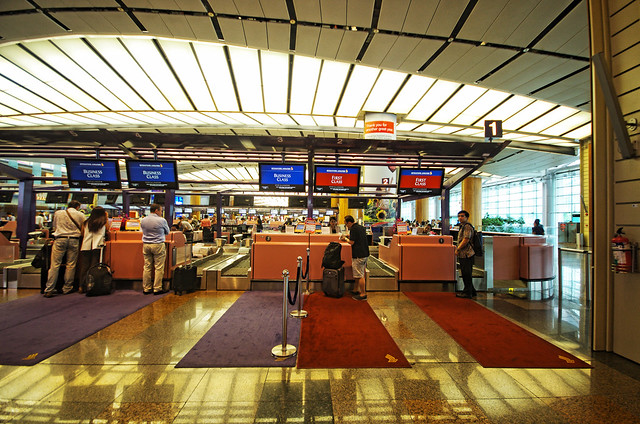 The queue for Singapore Airlines flights at Changi Airport is generally not that busy even for Economy flights. Business class and First class passengers get their own check-in counters in Terminal 2 where my flight departed from. My check-in procedure was pretty quick. I actually exceeded my 40kg baggage allotment but the check-in staff was kind enough not to charge me for the extra weight. I was handed my boarding pass and was politely reminded that I could access the Silverkris Lounge once I go past immigration. 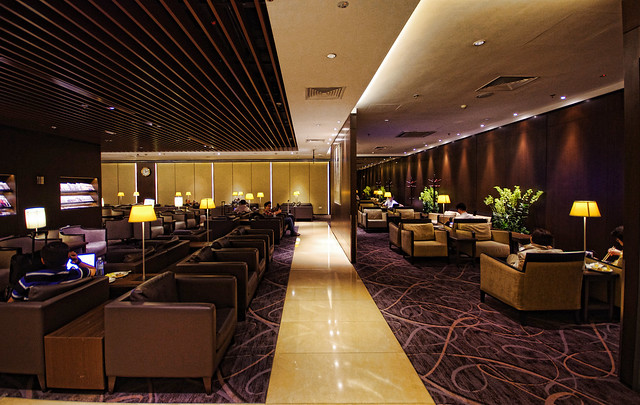 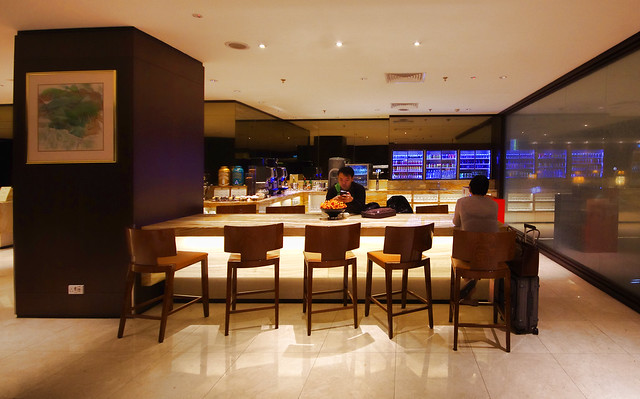 The Silverkris Lounge in Changi Terminal 2 was renovated in late 2011 and has separate sections for First Class and Business Class passengers. The Business Class section is quite densely packed with low-lying armchairs with small coffee tables in between. There’s a separate section containing PC’s for those looking to pass their time surfing the net or printing documents. Despite being there at a rather busy time for departing flights, there was still plenty of seating space inside the lounge though the bulk of those using actually concentrated themselves by the bar. 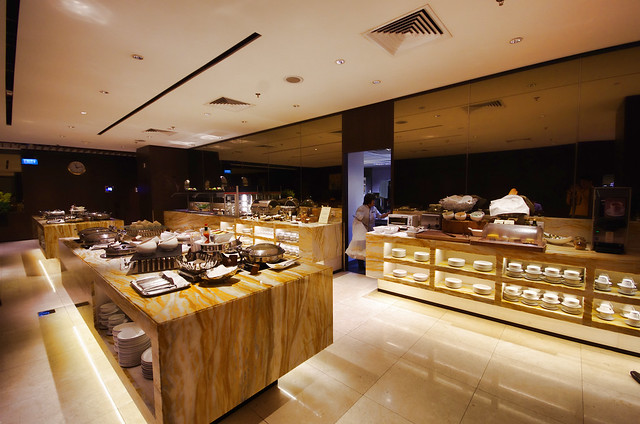 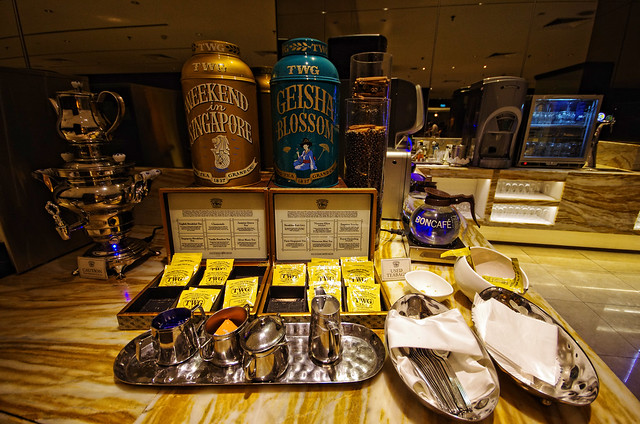 food offerings at the lounge

The buffet area sits in a rectangular space away from the seating area. Compared to other lounges in Changi Airport, the buffet spread is quite generous. I was there at around 11 in the morning, when the food selection was undergoing transition from breakfast to lunch food. The first thing I noticed was the huge spread devoted to Indian cuisine. There were quite a few types of curries and Indian bread available, not to mention a decent array of vegetarian items. There was also a small section dedicated to local Singaporean fare as well as Western fare. Overall, I could count at least 8 main dishes as well as sandwiches, cakes and fruits which could easily solve those hunger pangs.

There was also a wide array of alcoholic and non-alcoholic drinks available. The tea came from TWG.

I did not stay too long at the lounge as I checked in quite late. The boarding experience was pretty much the same as Economy except that I was shown to the Business Class door when I entered the plane. 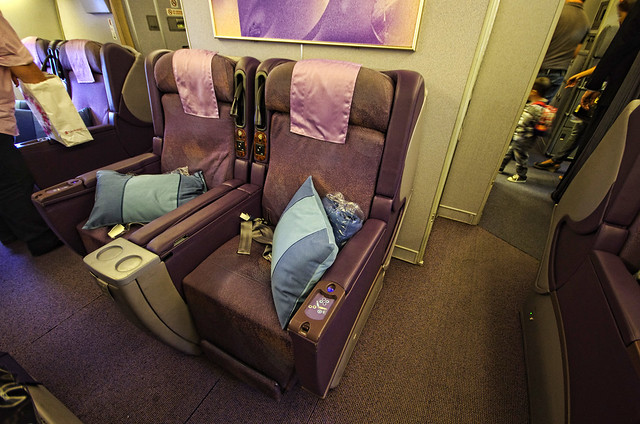 Upon entering, I showed my boarding pass and a flight attendant pointed me quite coldly to my seat. The unenthusiastic demeanor wasn’t a biggie but it certainly fell short of my previous experience with Singapore Airlines even at Economy Class, when the flight attendants would start with a warm greeting of “welcome back!” once they spot my Krisflyer number on the boarding pass. The level of service from some of my past flights was in fact so good one would be forgiven to think they were hitting on passengers! But I did note that the crew was rather busy dealing with a relatively full flight that day so it may partly explain the frantic look on their faces. Even the Business Class section was at least 90% occupied. And I thought Manila’s categorized as a low yield destination? 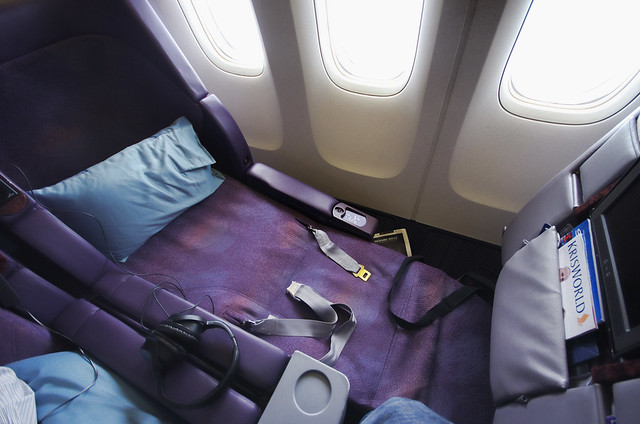 my seat when configured to lie flat

According to Seatguru, the seats in the version of Boeing 777-200 plane that I was on are angle-flat seats with fabric cushion aka the Space beds. I was actually expecting the old recliner business class seats on this flight so I was pleasantly surprised to see angle-flat seats. With an 8 degree incline, 60 inch pitch and width of 24.5 inches; it would have been acceptable even for longer flights. 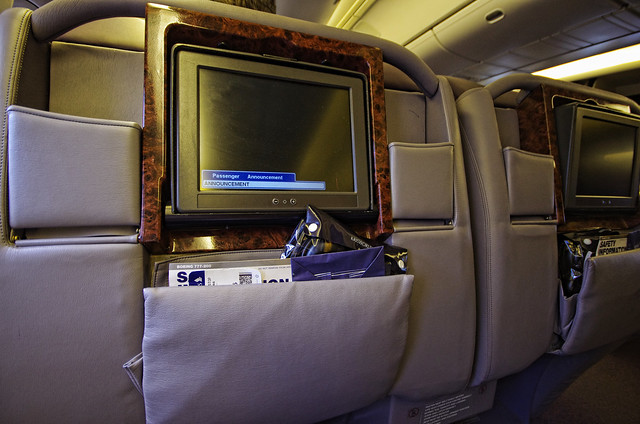 A flight attendant came around a few minutes later to offer some newspapers which was delivered quite promptly. 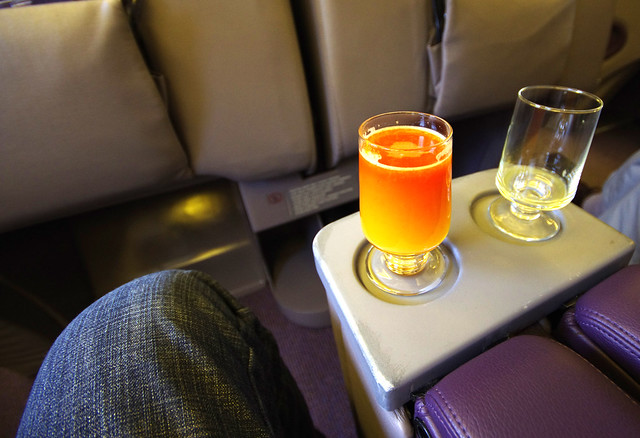 I was also offered a round of pre-takeoff drinks, a tomato based cocktail that reminded me faintly of Bloody Mary. Called “Awaiting the Golden Dawn,” it’s one of SQ’s own creations and the flight attendant was actually quite knowledgeable in recommending possible drinks for me. 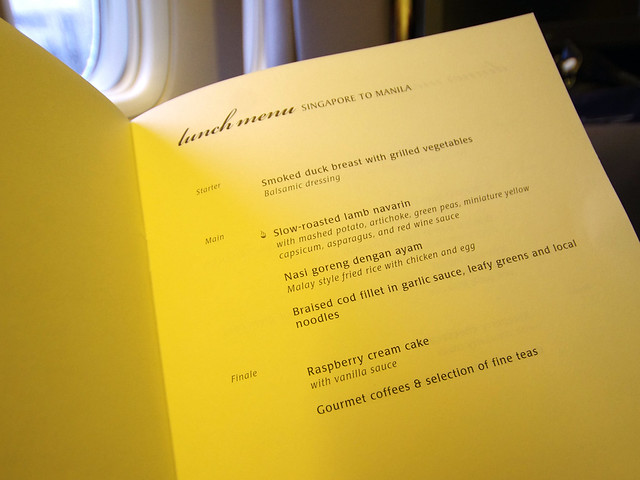 I was also asked for my option for the next round of drinks as well as my choice from the lunch menu. I had originally wanted to avail of SQ’s “Book the Cook” service but since I bought the ticket too late, I was advised by their customer service staff when I called in the night before to just order off the menu selection during the flight. The “Book the Cook” service needs to be reserved at least 24 hours before the flight. 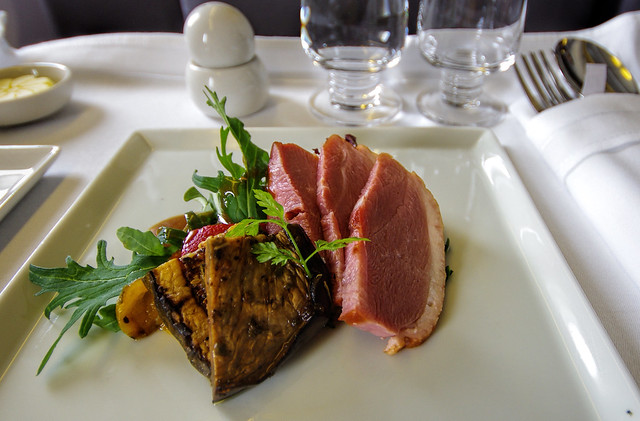 For appetizer, I had the generic Smoked Duck Breast With Grilled Vegetables. There wasn’t much to rave about on this one though it’s certainly an immense improvement over the salty ham that they used to serve. 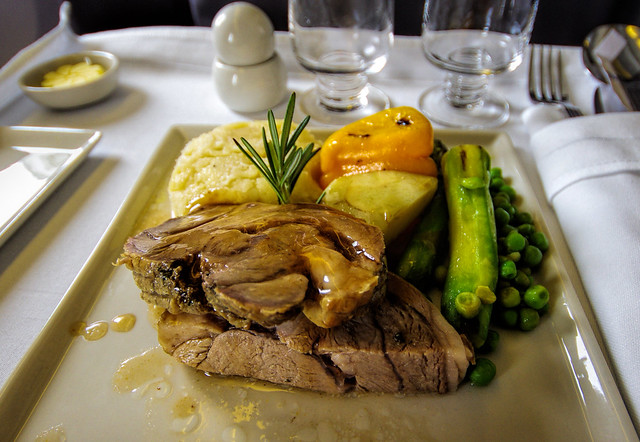 I had three choices for mains and I opted for the Slow-roasted Lamb Navarin which was heavily recommended by the flight attendant who took my order. I was particularly impressed at how they managed to keep the lamb tasting fresh, as if it was cooked just moments before serving. There was not much marination or seasoning done on the lamb but the rosemary that came with it created a well-suited fragrance to complement the tenderness of the meat. 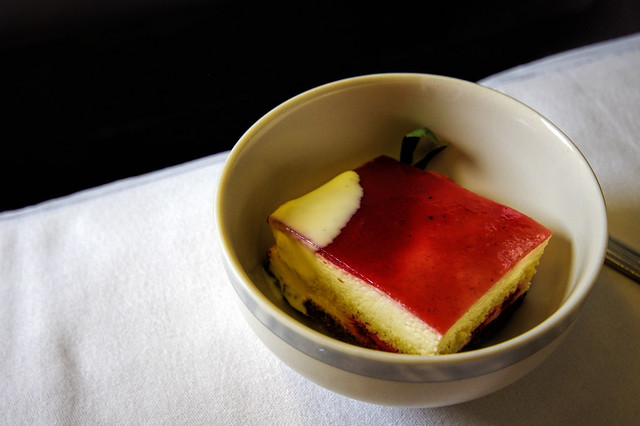 For dessert, there was the standard Raspberry Cream Cake. I normally don’t eat cakes whenever they’re served on the plane. They’re usually topped with an overwhelming amount of whipped cream that reduces the actual cake to just the bottom-most layer.  As for the Raspberry Cream Cake, I managed to finish this one. I particularly liked the crunchy texture that went well with the vanilla sauce. 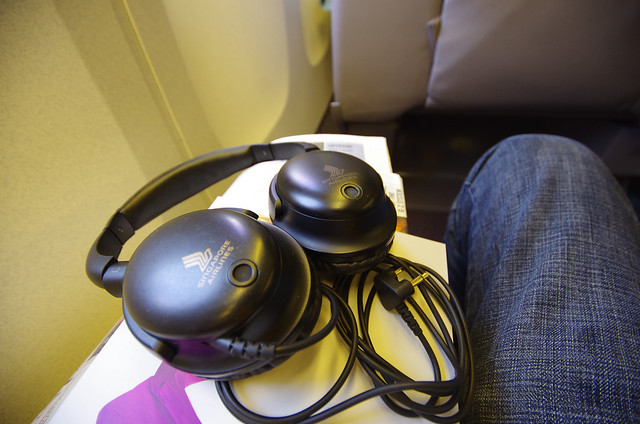 After the meal service, I tuned in to KrisWorld which featured tons of movies even though the entertainment system was of the older type. However, my enervation got the best of me after a whle. I then decided to have some shut-eye via the angle-flat seats. It was great to be able to lie-flat even on a short haul flight though I could partly see why SQ still uses the outdated recliner seats on some of these short flights. The nap time is just too short for an angle-flat seat. 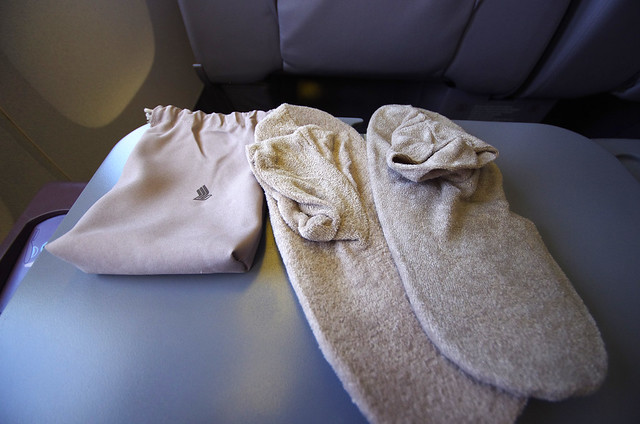 complimentary slippers for a good sleep

I slept for a good 30 minutes before waking up due to the pilot’s announcement that we were landing soon. With my mind still groggy, the only thing I could think of was, “so fast?”

The hard product, i.e. the seats, amenities, facilities and food was fine for a short-haul flight, considering that Manila is often tagged as a low-yield route. Upon booking, SQ’s website does indicate the type of plane being used for each flight and there are other planes such as the A330 or the retrofitted 777-200 which feature better and newer seating. But for a plane that was supposedly not retrofitted, the fact that I got angle-flat seats is already a plus.

The soft product, i.e. service – which has long been SQ’s strongest value proposition – was above average compared to other airlines on this flight. I did not encounter anything particularly bad on this flight. My most wonderful experiences with SQ tend to be on those flights when the crew is not so busy having to attend to the rigors of a cabin full of people so I totally understand that the crew had less time to interact with passengers this time around. The service standards that SQ is known for was present during my flight experience and I certainly would fly with them again.

Have you taken Singapore Airlines before? How was your experience?