Most visitors to the Philippines are likely to end up in one of the paradise islands of the archipelago for a beach getaway but those who spend more than the requisite transit time in the two largest urban centers, Manila and Cebu, are likely to discover a treasure trove of historic and cultural sights that have unfortunately taken a backseat. This easy-to-follow short itinerary for Manila and Cebu in the Philippines aims to introduce first-timers to the best things to do in the capital as well as the queen city of the south as destinations in their own right. In recent years, Filipino food has gained prominence in the international culinary scene and this has increased the foodie factor of both cities, adding another great reason to visit.

Also check out more tips for traveling to the Philippines.

Start your trip by exploring the old areas of Manila. One of the oldest continually settled cities in Southeast Asia, the city of Manila offers a mix of Spanish, Chinese and Malay architecture with walled cities as well as the earliest Chinatown in the world. 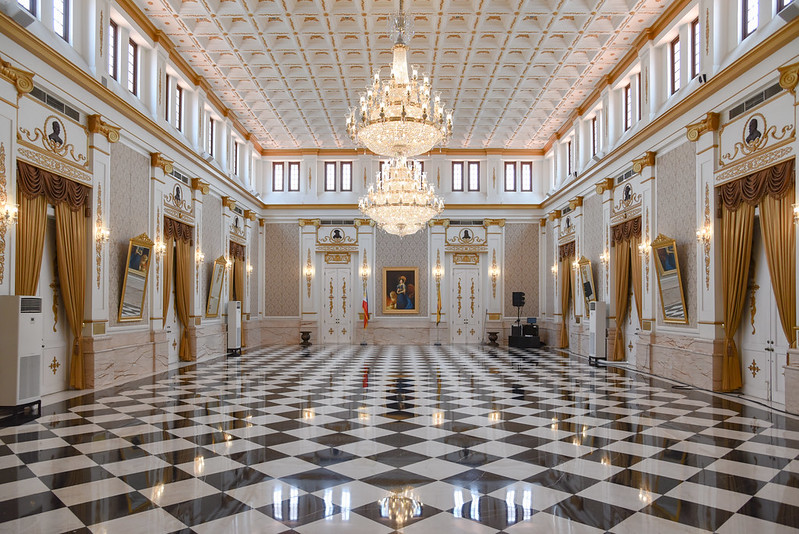 The area that is of most interest to travelers would be Intramuros. This walled city was built during the Spanish era and inside, the brightly painted colonial buildings which used to house government and important religious offices don’t look out of place in cities such as Seville or Granada. While here, don’t miss out the San Agustin Church, a UNESCO Heritage Site, with its interesting museum filled with religious artifacts. One of the must-sees while in Intramuros is the Ayuntamiento de Manila, a neoclassical structure which used to house the city council of Manila. Highlights inside include the dazzling Marble Hall as well as the frescoes on the ceiling of the Session Hall. Today, the building serves as the office of the Bureau of Treasury of the Philippines. Guided tours are available for PHP 20. 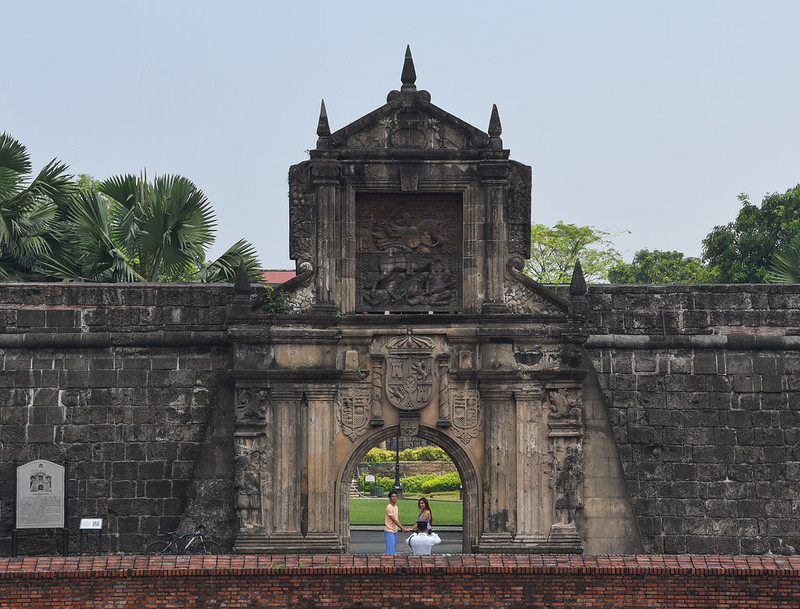 At the northern tip of Intramuros is Fort Santiago (open daily 8AM to 7PM, except Sundays til 6PM), a Spanish-era citadel that originates from the late 1500s. It is well known for its elaborate stone gate which has a carving of St. James on a horse. Inside, you will also find the Rizal Shrine, a museum dedicated to the national hero of the Philippines, Jose Rizal. Fort Santiago was where he spent his last day before being executed. 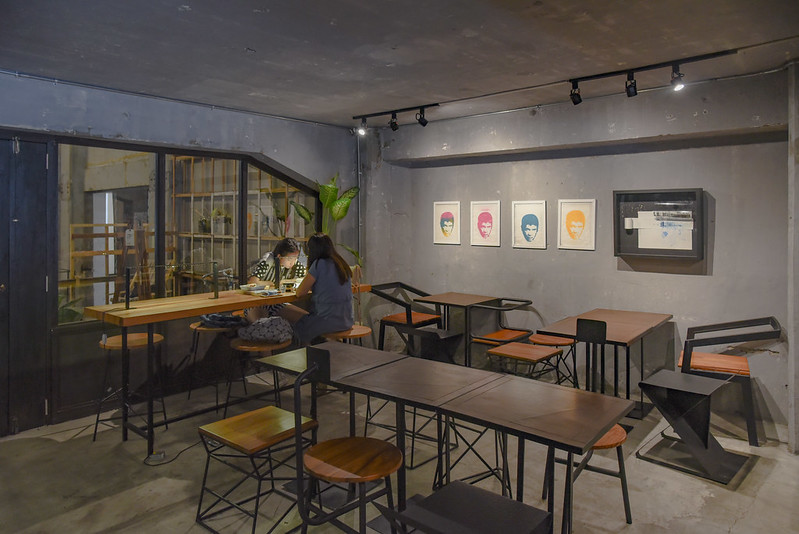 inside “the den” in escolta

From Intramuros, you can walk or take a pedicab to Binondo, Manila’s Chinatown and said to be the oldest in the world. As with similar communities elsewhere in the world, this is where you’ll find a high concentration of Chinese restaurants, apothecaries and groceries catering to the country’s influential Chinese community. While here, I’d recommend taking a walk down Escolta – a street that was once Manila’s main shopping drag. Most commercial establishments have moved on to newer developments elsewhere but the vintage factor has attracted the hipster crowd as of late. The bulk of the hipster activity is concentrated in the First United Building where you’ll find HUB Make Lab, a creative space by local designers as well as The Den, a hip coffee joint. If you’re there in the evening, check out Fred’s Revolucion (open daily except Sundays, 5PM to midnight), a cozy speakeasy joint frequented by artists and creative types. 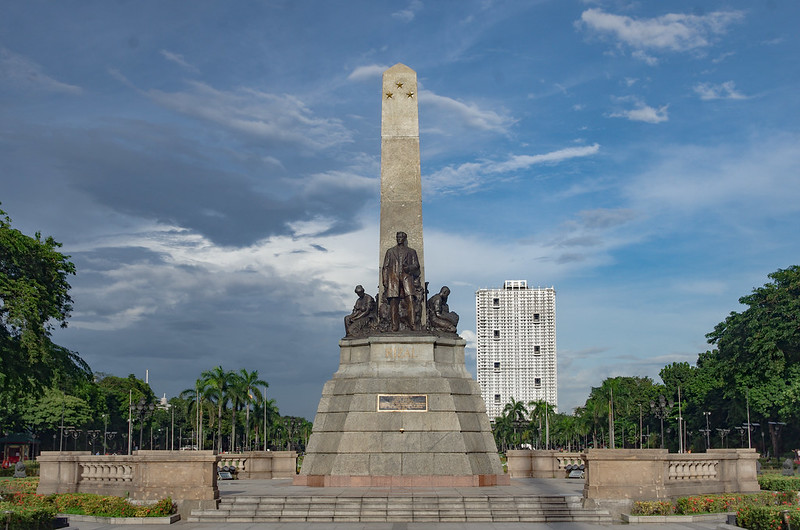 A relatively new attraction in Manila is the National Museum of Natural History (open daily except Monday, 10AM to 5PM) which is known for its picturesque dome flanked by a double helix structure. Even if you have no interest in artifacts, the venue is worth visiting just for the instagrammable interiors alone. The museum is located a few meters south of the southern tip of Intramuros and is part of a larger complex within Rizal Park. If you have more time, the National Museum of Fine Arts (open daily except Monday, 10AM to 5PM) is also worth a visit for a glimpse of the masterpiece by Filipino painter Juan Luna called Spoliarium. 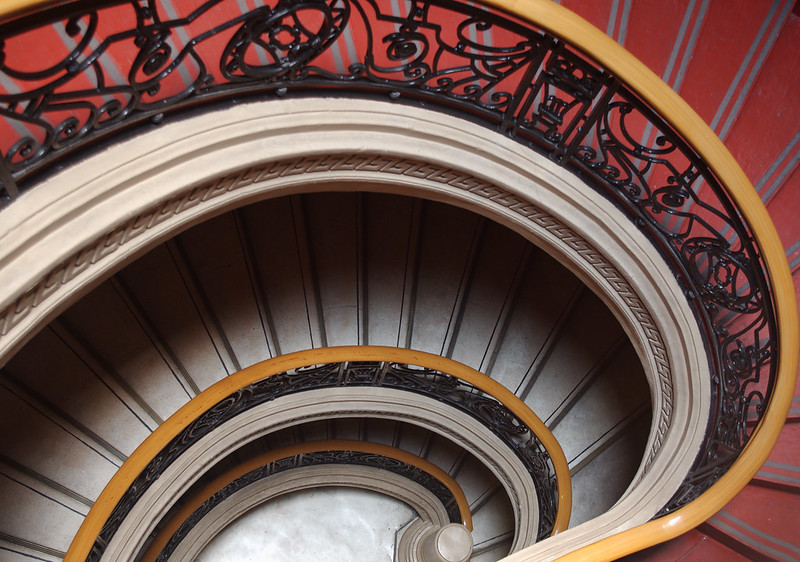 Manila’s dining scene has grown by leaps and bounds in recent years and it’s possible to not just eat well here but one can also sample some pretty imaginative dishes by talented and up and coming chefs. A restaurant that has been making waves recently is Toyo Eatery (2316 Chino Roces Avenue, open daily except Sunday and Monday 6PM to 11PM). One of the star dishes here is a salad called “Bahay Kubo” which literally means straw hut. If you come on a good day, you might even witness the waiters singing the song “Bahay Kubo,” also the title of a nursery rhyme, as they serve the dish. 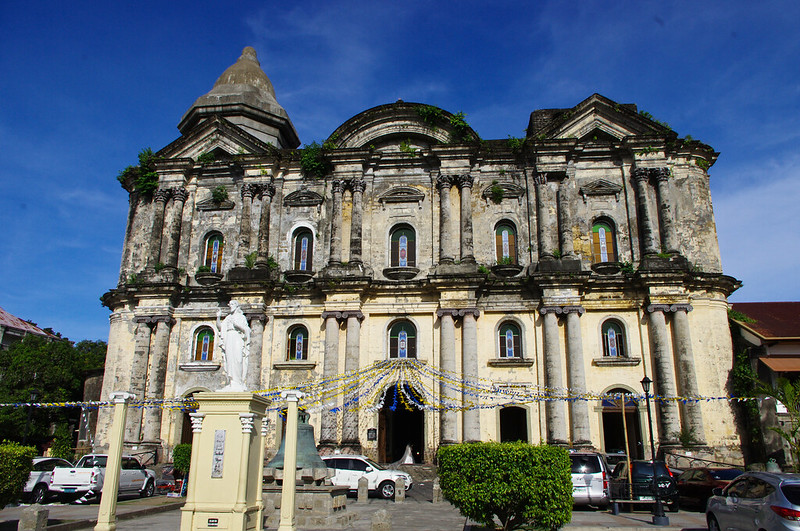 basilica of st martin of tours in taal

Drive south to Tagaytay City, a cool weekend retreat for many Manila residents. For travelers, the main attraction here is Taal Volcano which sits prettily on a lake. During clear days, it’s quite a dramatic sight from Tagaytay. It’s also possible to visit the volcano itself by taking a boat ride. A round trip journey costs about Php 2,000 per boat but do try to bargain. Drop by Antonio’s for lunch. The venue is frequently ranked as the best restaurant in the Philippines and one of the best in Asia. The cuisine is decidedly European with some Filipino elements. 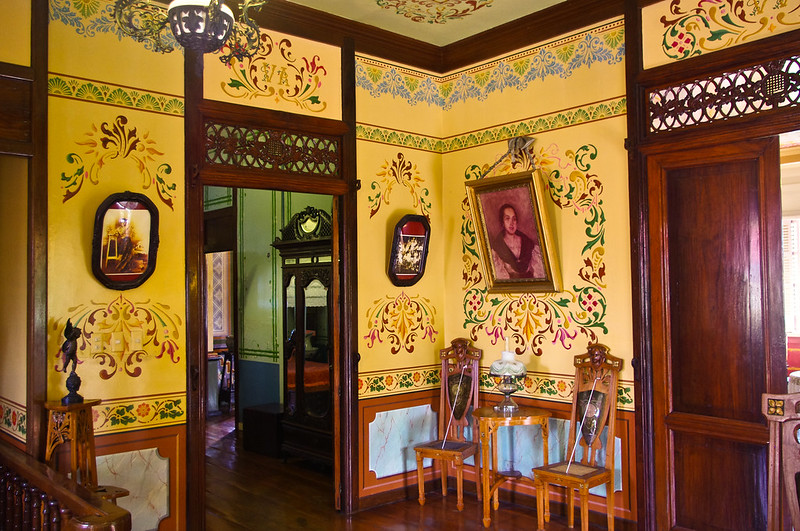 After lunch, venture further south towards the other direction of Taal Lake. Here, the eponymous Taal Town beckons. This is one of the country’s best preserved colonial towns, second only to Vigan which has a UNESCO World Heritage designation. Check out the Basilica of St. Martin of Tours, said to be the largest church in Asia. Its rectangular facade is quite unique and the interiors are no less grand. While in Taal town, a stop at the heritage houses are a must. Of note are the Villavicencio Wedding Gift House (call +63 917 8970363 to book a tour) with its bright yellow walls and floral patterns as well as the Apacible House. If you opt to stay a night, it’s possible to reserve a room at the Villavicencio House. Otherwise, return to Manila in the evening. You can also check my guide to Taal town for more ideas of things to do in the area.

Take a morning flight to Cebu – the second largest urban agglomeration in the Philippines. Compared to Manila, the city of Cebu is actually slightly older, having been founded more than 5 years before the Philippine capital. Today, the city is as modern as most large Southeast Asian cities and boasts of fine white sand beaches not far away from downtown. 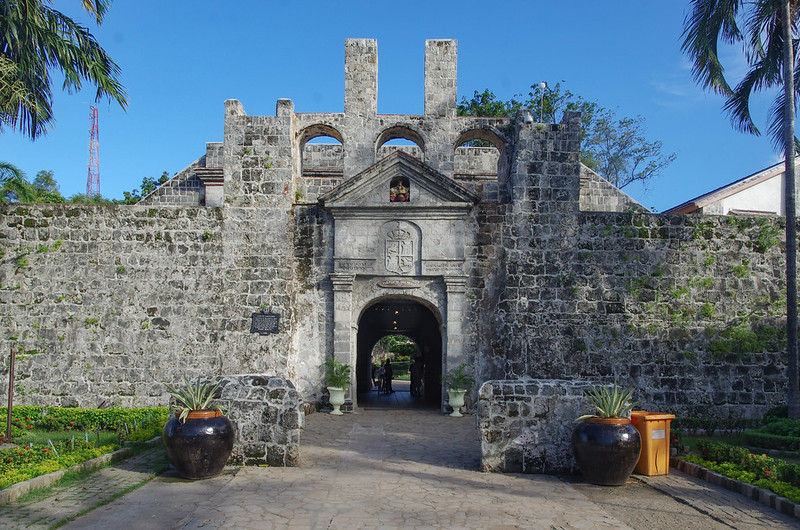 Owing to Cebu’s status as being one of the oldest cities in the Philippines, there are plenty of cultural attractions here for the traveler to explore. Within the downtown area, you can walk between the historic stone fort called Fuerza de San Pedro, the Basilica of Santo Nino with its constant stream of devotees praying before a statue of the child Jesus (said to be the oldest religious artifact in the Philippines) and the beautifully constructed Cebu Metropolitan Cathedral. Erected as a symbol of the city, the Magellan’s Cross marks the spot where Ferdinand Magellan supposedly planted the cross when he and his crew reached Cebu during the first ever voyage to circumnavigate the globe.

For a nice overview of the city, head up to the Taoist Temple. While you’ll find similar temples all over Southeast Asia, what makes this place interesting is its hillside setting. During clear days, you can glimpse upon the ever growing skyline of the city. Admission is free.

One of the more exciting restaurants to open in Cebu in the last 2 to 3 years is The Pig & the Palm (Negros Road, open daily except Monday 11AM to 11PM, til 1AM during weekends) by Jason Atherton, the celebrity chef who used to co-own a number of high-end restaurants in Singapore. Elsewhere, Cebu may not be the first place you’d expect to find one but Tymad Bistro (Paseo Saturnino, open daily except Monday 7AM to 11PM) has some of the best croissants and caneles I’ve tried.

For a bit of rest and relaxation, check out one of Mactan’s world class resorts. Popular lodgings include the Shangri-la Mactan Resort & Spa as well as Movenpick Cebu. The waters along the coast from these resorts are unbelievably clear and are brimming with fish, definitely something you won’t find in any other large city in Southeast Asia. 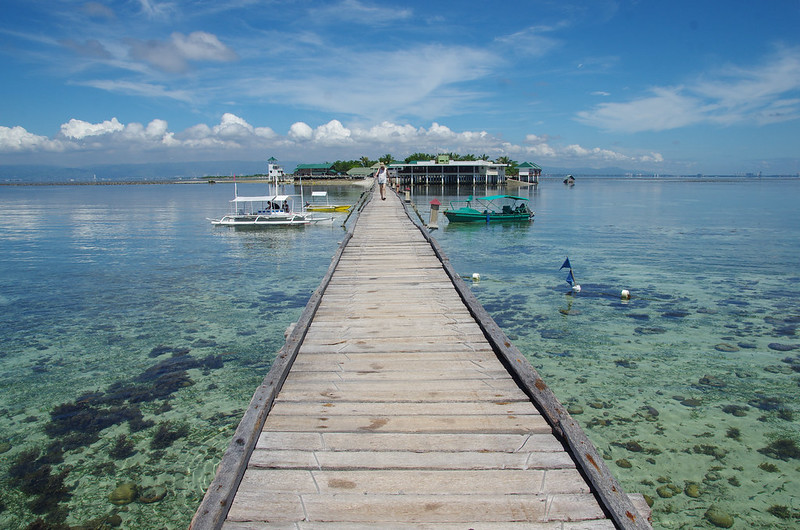 From Mactan, you can also hire a boat to take you to the outlying islands which offer even clearer water filled with marine life. A personal pick of mine is Nalusuan Island which is about 30 minutes by boat from Mactan. The seascape here is simply unreal, especially at the shallow parts where you can see corals and other fish from above ground. Most trips to these areas usually involve a seafood lunch in one of the houses on stilts. The seafood is freshly caught but prices are a tad higher and the cooking can be a lot better. 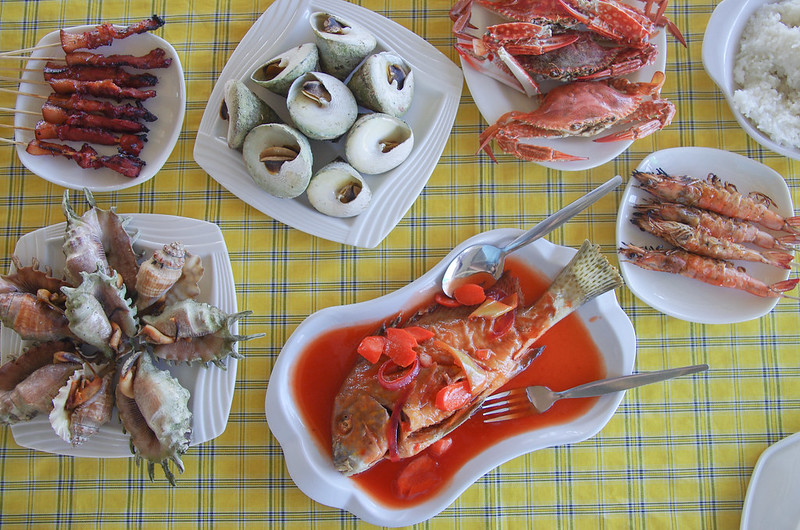 While in Cebu, you can’t miss having lechon. Cebu’s version is more fragrant than the one you find in Manila as it’s stuffed with lemongrass while roasting. Ask any Cebuano and you’d probably find different recommendations for the best lechon in Cebu but a common favorite is Rico’s Lechon (Mactan Promenade, Lapu Lapu Airport Road, open daily 10AM to 10PM) which has a number of outlets around Cebu. There is also one outlet in Mactan itself which makes it convenient if you are looking to try some good suckling pig before boarding your flight.

Other Short Trip Opportunities From Manila

Other Short Trip Opportunities From Cebu

Alternatively, you can check here for other packages and deals.

Where to Stay in Manila and Cebu

Midrange – The Rizal Park Hotel Manila oozes colonial charm and is ideal for those looking to spend more time in the older parts of town.
Luxury – The Grand Hyatt Manila is one of the newest choices for top-end lodging in the city. It is located in Bonifacio Global City near the hip restaurants and upscale shopping areas.

Midrange – The Henry Hotel Cebu is a trendy hotel with colorful rooms. It is located at a newer part of the city, just a few minutes walk from Tymad Bistro – the go-to place for croissants and French pastries in Cebu.
Luxury – The Shangri-la Mactan Resort and Spa has been around for over 20 years but it remains to be one the more compelling places to stay in Cebu. With a beautiful beachfront right at the resort’s doorstep, the sprawling grounds also has an outlet of Chi, the spa, while the inhouse buffet is one of the top choices in the island.