Shang Palace at Shangri-la Singapore has launched its The Chef’s Table, a monthly affair where fans of the restaurant and of Cantonese cuisine can come check out one-of-a-kind culinary creations by Chef Mok Kit Keung who has helmed Michelin-starred restaurants in Hong Kong in the past. I recently attended the very first The Chef’s Table event held on the 15th of August. As is the intention of all The Chef’s Table events, the dinner was held in Shang’s Palace private dining room. The meal consists of six-courses – with each session comprising different dishes based on seasonal produce. 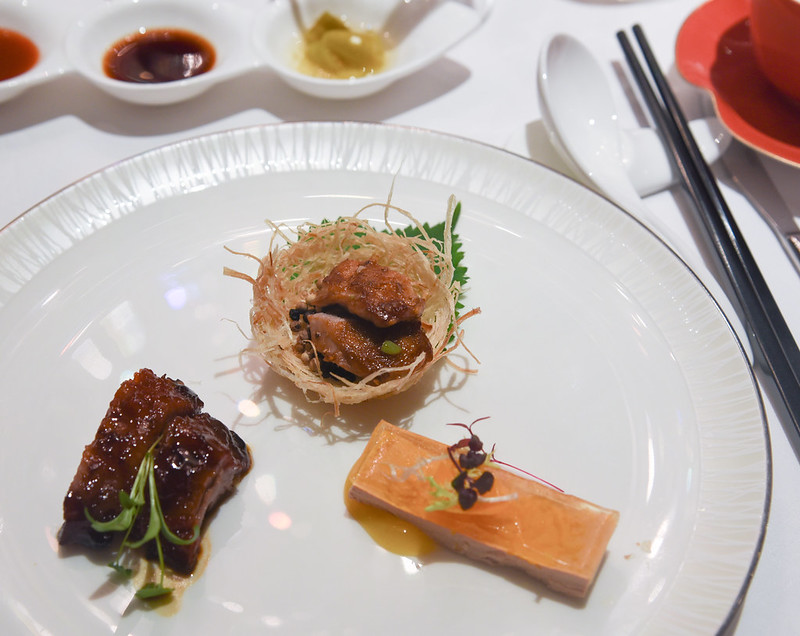 The first session was a highly interactive affair where Chef Mok Kit Keung himself introduced the background and rationale of each dish. We started off dinner with a trio of appetizers. The Barbecued Pork Loin glazed with Honey Sauce is one of Chef Mok’s specialties. Tender and juicy due to the Iberico pork used, I also loved the addicting honey sauce used here. The Pan-Fried Quail Fillet with Lemongrass and Pepper was another winner. Perched on a “nest,” the quail was fragrant due to the lemongrass and lacked any game-y flavor that one would normally expect from the bird. The Foie Gras with Kumquat Jelly on the other hand was a nice contrast of sweet and salty with the kumquat-based jelly providing something of a novelty. 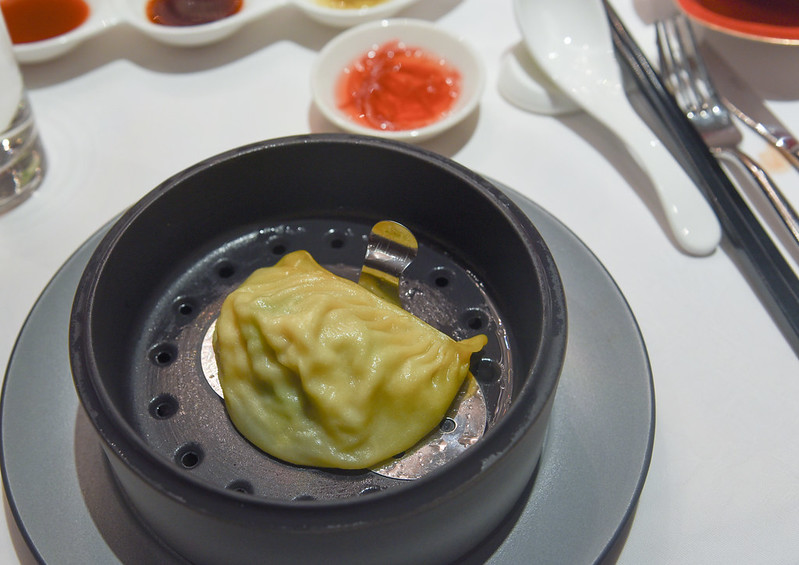 The Traditional Steamed Soup Dumpling is huge and may not look much at first glance but the delicious conpoy stock and crustacean filling within proved to be a highlight. The robust flavors came bursting out upon first bite. This is a dish that I’d definitely return for and luckily, it’s also available in the ala carte menu. 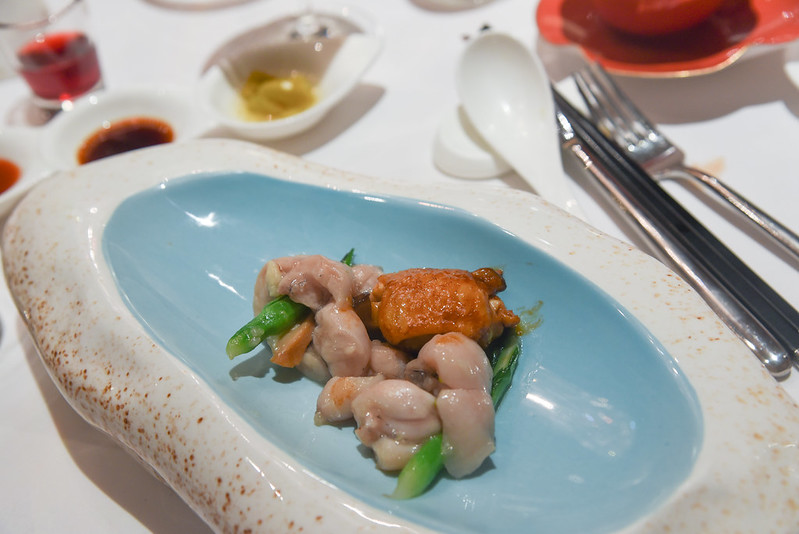 I love eating frog legs and was delighted to find the Sautéed Boneless Chicken Wing and Frog Leg Skewer with Abalone, Seasonal Vegetables and Yunnan Ham in the menu. All meat on the plate had their bones removed although stalks of vegetables sticking out on certain pieces gave a bone-in illusion. Of the various meats, the frog was a highlight with its soft texture that went well with its sweetness. 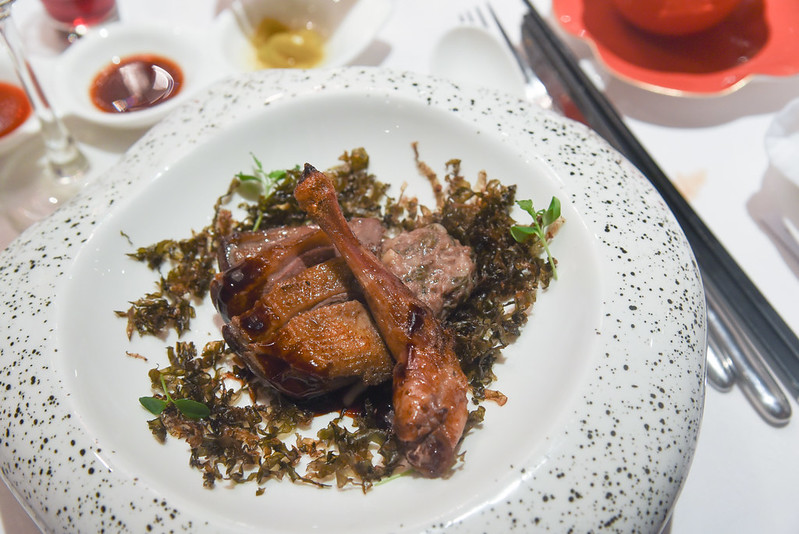 I had two favorite dishes that evening and one of them was the Fried Pigeon with Preserved Vegetables. Done in three ways, the pigeon came steamed as a patty, fried (the leg) and roasted (the breast). All three types were executed quite well especially the breast which in most other places usually come rather dry when roasted. To add complexity in the dish, crispy pieces of preserved vegetables surround the bird which I finished one by one. 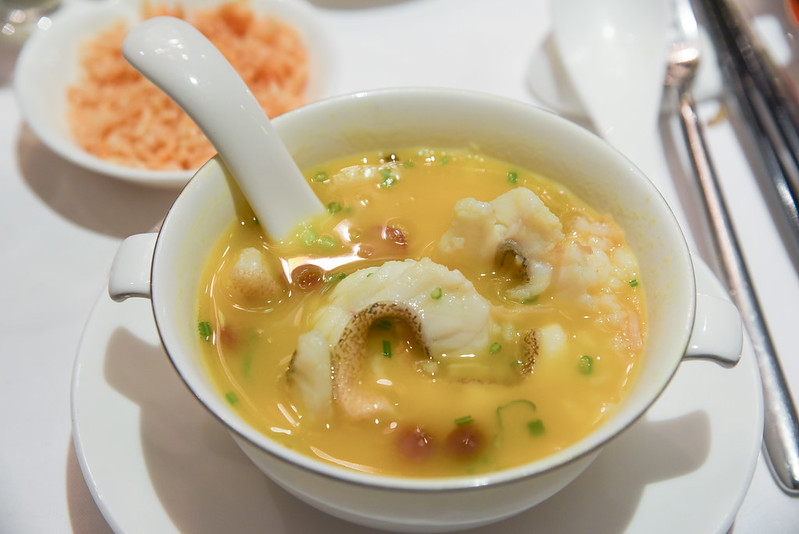 Just thinking about the Poached Rice with Star Garoupa Fillet and Crab Meat in Pumpkin and Fish Broth makes me hungry all over again and it’s a shame this soup isn’t part of the regular menu. There’s also the option to top it off with rice crispies (recommended) for an added crunch. 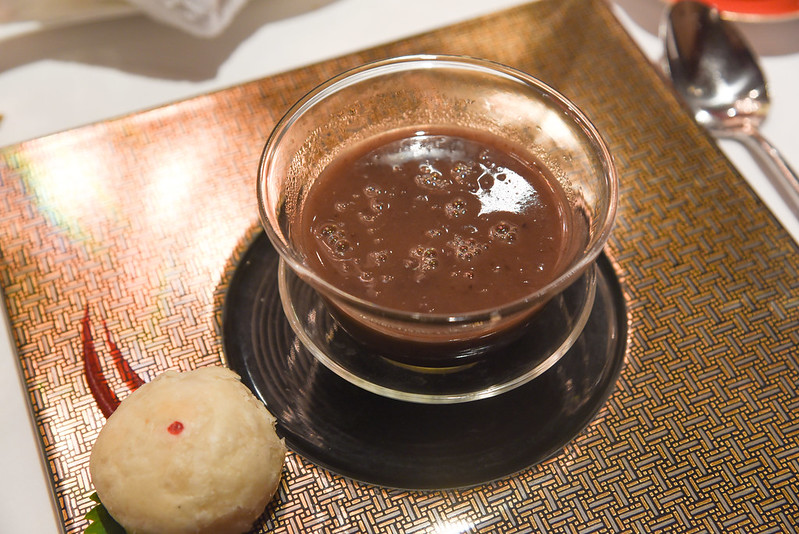 Aged Tangerine Peel in Sweetened Red Bean Soup as well as a Baked Sweetened Winter Melon Pastry concluded dinner. The former was atypical of your usual red bean soup with the tangerine peel giving it a mild citrus-y taste.