Although a mere 90 minute flight, Koh Samui can prove to be a tricky place to get to from Singapore. Fares are often high and with only 2 airlines just servicing this route, the schedule may sometimes not be optimal for a short jaunt there.

I took Bangkok Airways during a recent trip to Koh Samui due to its schedule which is conducive for those looking for a weekend trip to the resort island. I opted for an evening flight on Friday. This meant that I could leave the office after work at 6 and check-in for my flight with time to spare. Similarly, they have an afternoon flight on Sundays which gets me back to Singapore by early evening to prepare for the next working week.

Bangkok Airways is also an airline that has always captured my attention. It positions itself as “Asia’s Boutique Airline” and is known for clever extras such as free lounge food even for its Economy Class passengers. I have transited in quite a number of domestic airports in Thailand and recall feeling envious every time I saw the ubiquitous buffet spread reserved for Bangkok Airways while sitting there at the opposite side of the boarding area.

The flight departs from Changi Airport’s Terminal 1. My check-in procedure was a breeze. There was no queue at the time and there were at least 3 check-in counters open to serve the 120-passenger capacity for an A319. 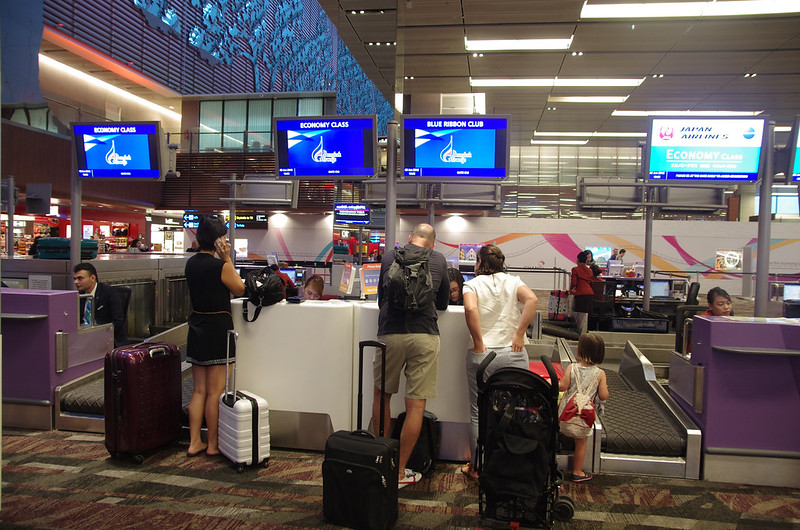 I had quite a bit of time to spare at Changi Airport so I checked myself in the Plaza Premium Lounge which can be accessed via Priority Pass. Although not opulent by any means, I go to this lounge for its made-to-order meals. I particularly love the sushi rolls here. Tip: when at the Plaza Premium Lounge, be sure to try the spicy tuna rolls. It’s an off-menu item. 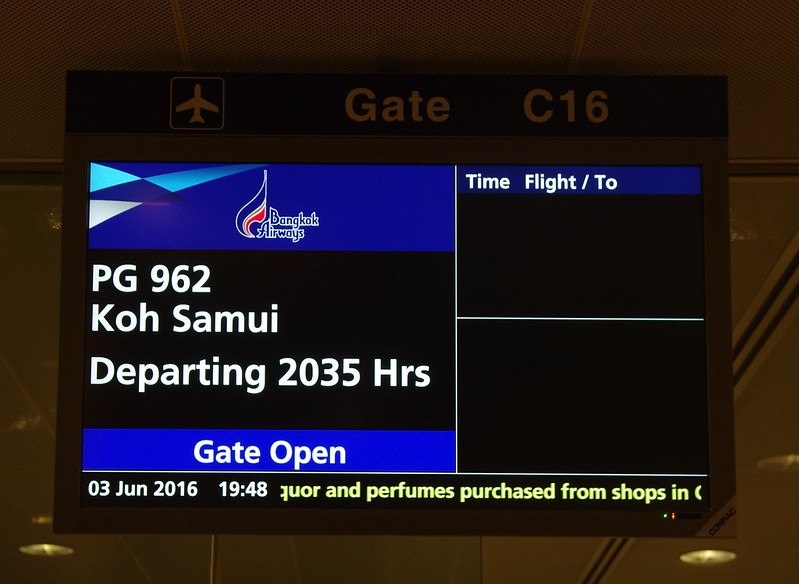 I then proceeded to my gate for boarding. Like most boarding procedures, passengers for Business Class and the rear of Economy Class get to board first. Upon entering the aircraft, I was greeted by smiling crew members and purple seats. 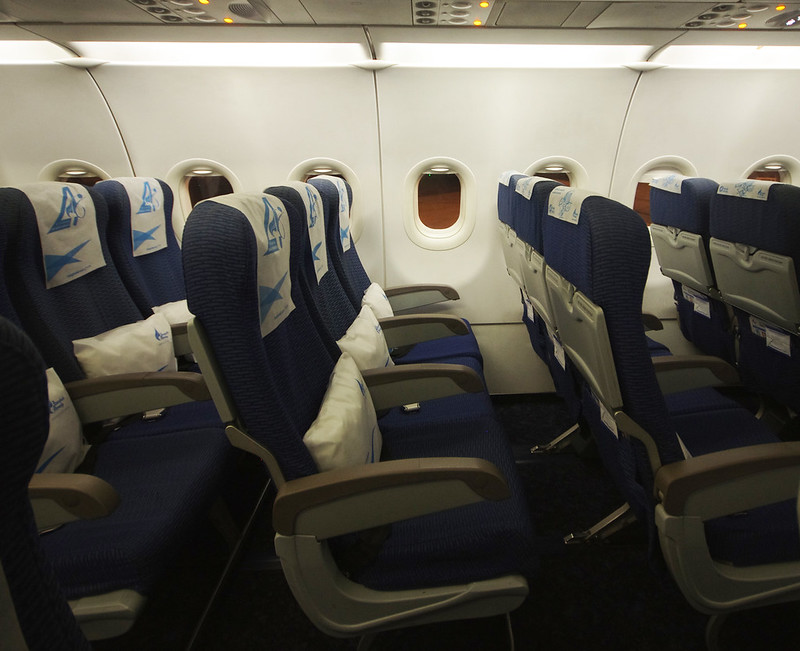 My seat for this flight was 20D. The flight was not full and I did not have anyone sitting beside me for the 90 minute journey. 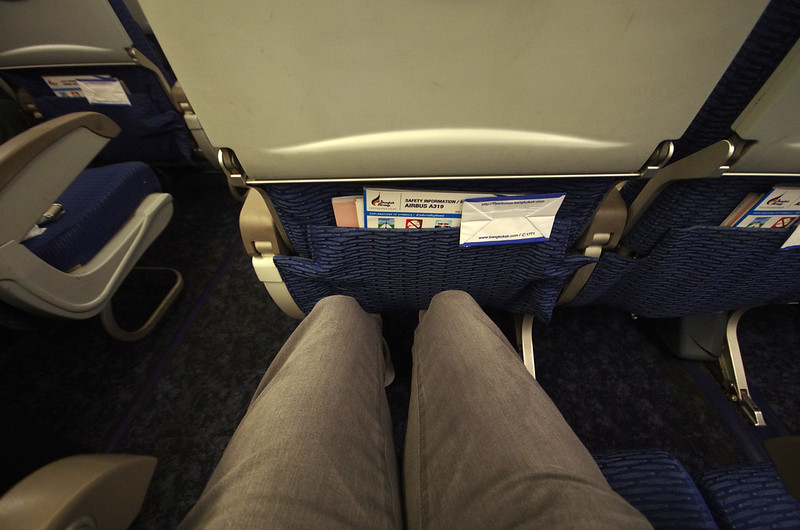 The seat pitch on PG’s A319 is 31 inches which is in line with other airlines. The width however was noticeably more generous at 19.8 inches in a world where 17 inches has already become the norm. 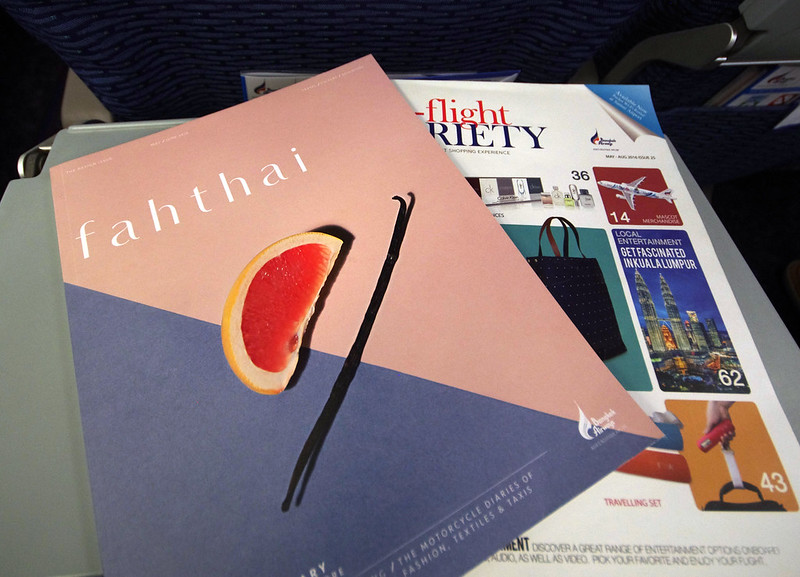 There was no personal entertainment system on the flight which is fine given that it’s just 90 minutes long but there’s a drop-down monitor every 4 seats or so flashing Koh Samui promotional videos and the gag show, Just for Laughs. 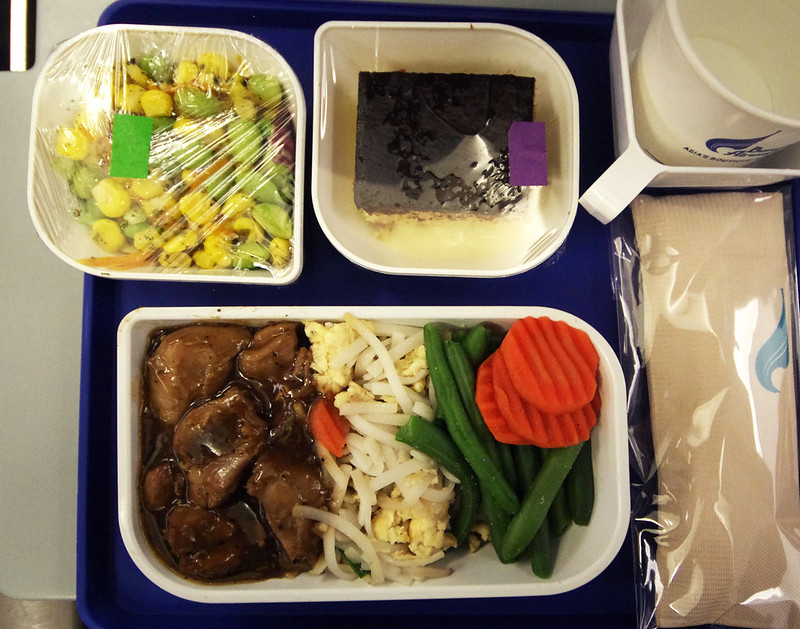 Meal service started shortly after leaving Changi Airport. There was just one meal choice which allowed the crew members to distribute the food quickly. For this flight, I got chicken with noodles as the main course, with chocolate cake for dessert and salad for appetizers. Crew members were quite enthusiastic with the wine and tea/coffee service that followed.

We arrived in Koh Samui Airport soon after that. The airport’s layout makes aerobridges impracticable so the aircraft parked on the tarmac while a buggy whisked us to the arrivals area. 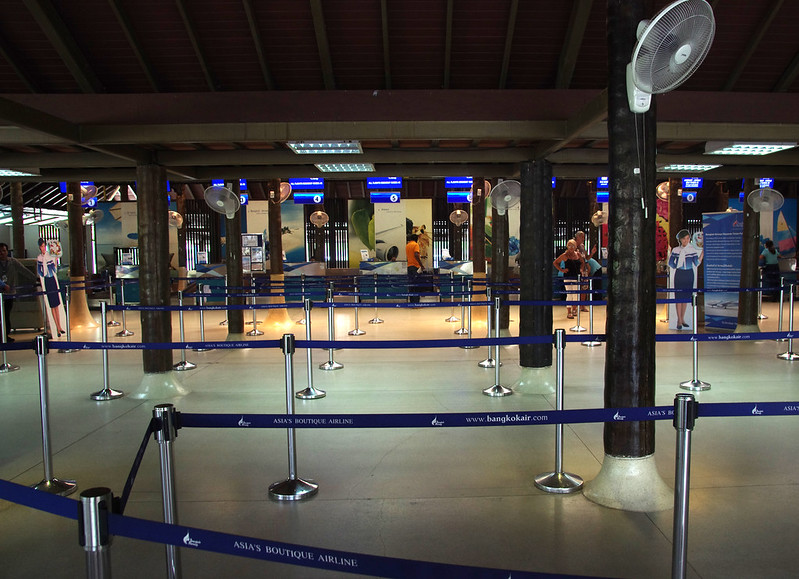 For my flight back to Singapore, I was quite excited to see Koh Samui’s airport in the day after reading so much about its resort-like appearance. Indeed, the airport looked quite unlike any other I’ve had the pleasure of using. It certainly is the first open-air airport I have been to, with shops situated in a retail strip that doesn’t look out of place in a promenade in the United States. 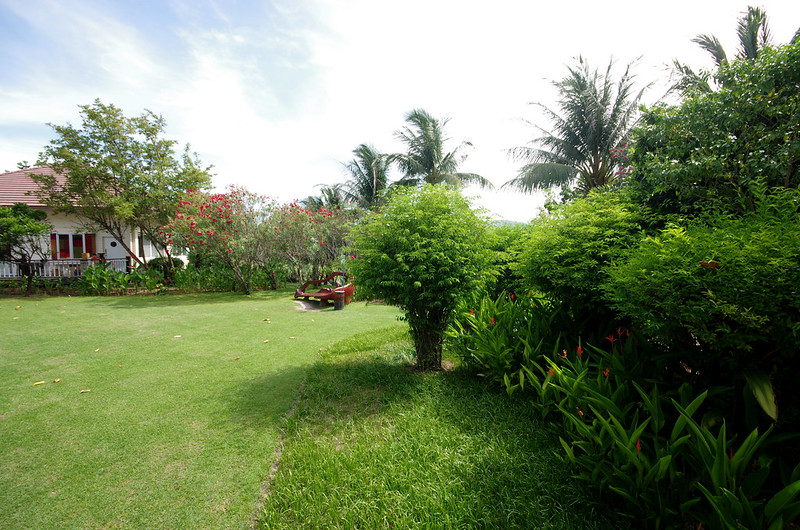 Since USM is an open-air airport, I did notice quite a number of people rushing in to the airport café for decent air-conditioning. There was also a Swensen store selling ice cream which proved popular during warm days. For those with time to spare, there’s a massage parlor across the café. 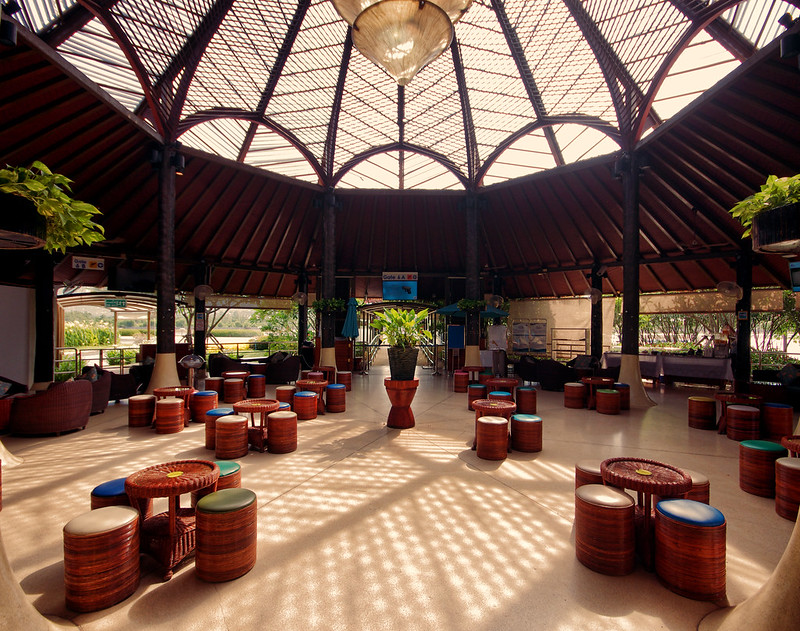 The boarding gates for international flights are situated at the far end of the airport, towards Gates 6 and 7. The boarding gates too, looked like what one would expect to see in a tropical resort. Gate 7 which was used for my flight back to Singapore was fortunately airconditioned and had less of a resort vibe. 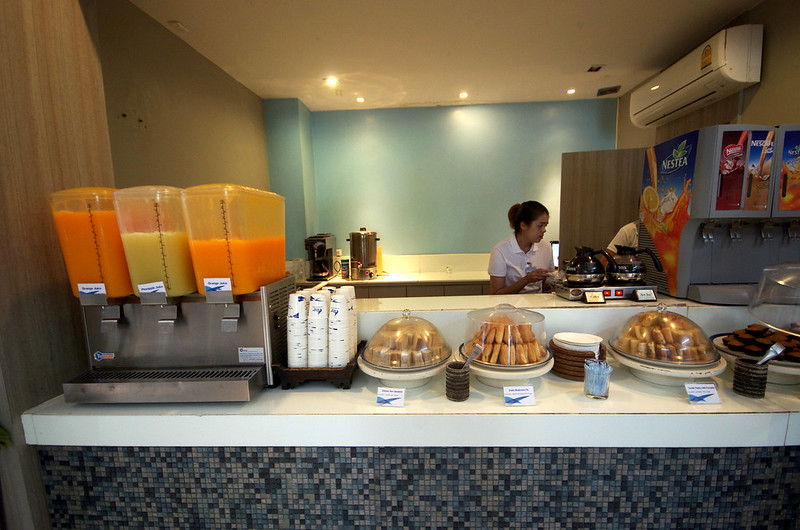 In true Bangkok Airways style, there was a small buffet spread of pastries and sandwiches and hot/cold drinks for passengers to partake. I wasn’t feeling hungry then so I didn’t have anything but thought it was a good differentiating factor. For some reason, the buffet spread at USM did not have a popcorn stand which I saw in PG’s offerings in other Thai airports. I would have liked that.

When it was time for boarding, a buggy took us to the plane which turned out to be the exact same one I had taken to Koh Samui two days ago. The plane’s name was “Phnom Penh” which happens to be one of my favorite cities in Southeast Asia. 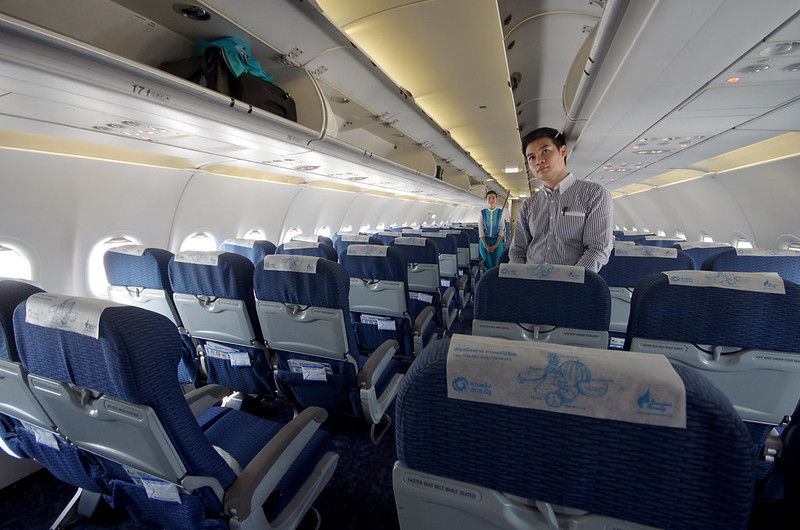 My seat for this flight was 19A, just one row in front of where I sat 2 days ago. I had more or less a similar experience on my return flight to Singapore except that the cabin this time was much fuller. 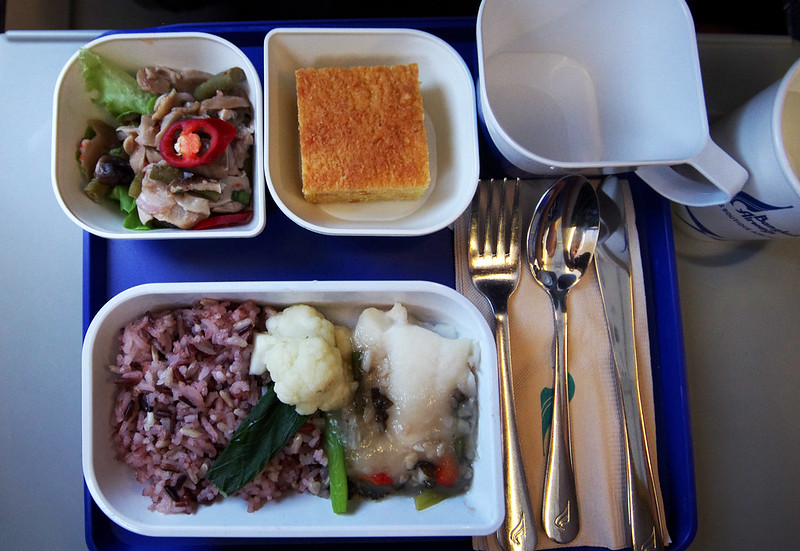 That being said, I did prefer the food on my return flight, with a very healthy steamed fish on brown rice, mushroom salad and coconut cake. The airline had recently collaborated with renowned Chef Mcdang to revamp their inflight menu. The food now showcases specialties from the four regions of Thailand.

While many premium carriers have cut back on their services, Bangkok Airways refreshingly remains in a world where you get a full meal (and wine service!) even for a short flight. Their fleet is not the newest out there but their seating configuration is still one of the most generous one can encounter in Economy Class and I would gladly take more seating space any day. This is compounded by nice extras such as airport lounge food for all passengers and a unique-looking airport (if you are flying to/from Koh Samui). Little wonder then that PG is frequently associated as a holiday-goer’s airline in one of Asia’s most popular tourist destinations.