Cambodia’s capital, Phnom Penh, counts a genocide museum and a place called the “killing fields” among its top sights. With attractions centering on the morbid, coming here was never in my list of priorities. I had been to Cambodia previously but directly skipped the capital in favor of Siem Reap to see Angkor Wat.

Armed with good recommendations from friends and colleagues, I finally made my way to Phnom Penh just last week – nearly 6 years since my last visit to Cambodia. Needless to say, I was bowled over by the laidback vibe and friendly city folk. With rapid economic growth in recent years, Phnom Penh is currently undergoing a massive change  with new highrises, fancy restaurants, bars, museums and day trip possibilities. Those who arrive on transit to Siem Reap, usually from Ho Chi Minh, and check in immediately to their Phnom Penh hotel without expecting anything will be pleasantly surprised. Cambodia’s capital is now a destination in its own right with several things to keep the traveler busy. For a city that has earned a gruesome reputation due to its recent past, I found a plethora of things to see and do that were not in any way related to torture chambers or mass executions.

For a 5 to 7 day itinerary of Cambodia that runs through the essential sights, check out this combined Cambodia travel guide

Perhaps the most stunning architectural sight in Phnom Penh, the royal palace occupies several acres of land in the city center. Despite its seemingly imposing style, the complex is a relatively recent creation (especially when you compare it with the likes of Angkor), having been built only in 1866. It has been the official residence of the King of Cambodia since then. 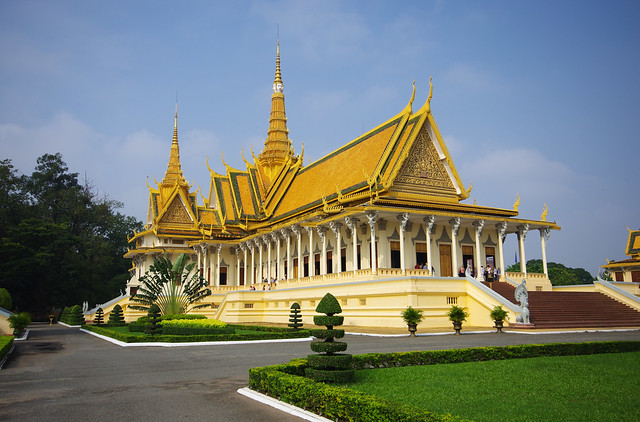 the impressive throne hall of the royal palace

There are several buildings inside the complex but the most impressive is definitely the Throne Hall. The building takes the shape of a cross and is topped by three spires. The monarch of Cambodia is traditionally crowned here. Visitors are able to walk up to the Throne Hall and observe the majestic interiors from the windows. 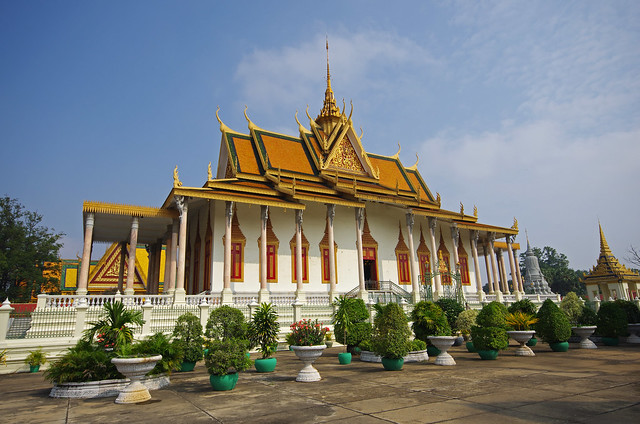 Aside from the Throne Hall, the other important building is the Silver Pagoda. The temple is officially called – it’s a mouthful – Preah Vihear Preah Keo Morakot and is conventionally known as Silver Pagoda due to the thousands of silver tiles that line it. Visitors are able to enter it to marvel at the Buddha statues but need to be dressed modestly. 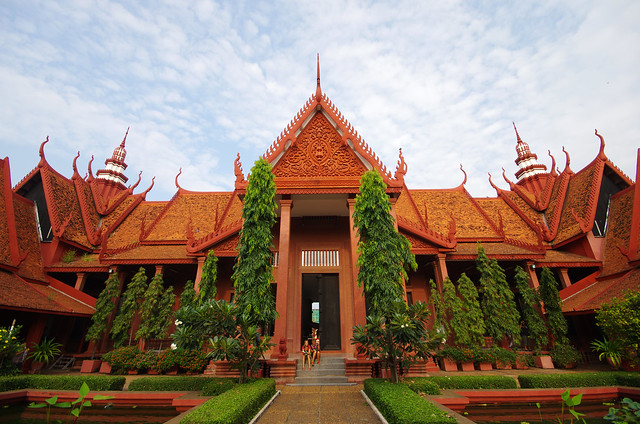 the impressive building that is cambodia’s national museum

Just a stone’s throw away from the palace, the National Museum in Phnom Penh is an archeologist’s dream. Given the sheer number of ancient ruins found in the country, the National Museum hosts an excellent collection of artifacts dating back from the era of Angkor. Museum pieces aside, the building itself is also architecturally stunning and is made all the more so with a central courtyard filled with lotus ponds and a statue of the “Leper King” originally from Angkor as a centerpiece. 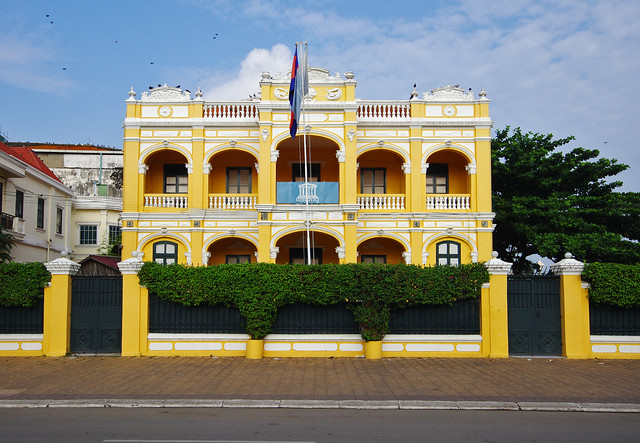 Though not as widespread as in say, Hanoi or Saigon, Phnom Penh has its fair share of colonial buildings. The biggest concentration of these can be found in the city center, in the streets surrounding the royal palace as well as in the riverside area. Built during French rule, many of these buildings have since fallen into disrepair while some were transformed into hotels and offices. Fine examples include the main post office building, the UNESCO office just across the royal palace and the Raffles Le Royal, arguably the finest hotel in Phnom Penh.

I highly recommend going on one of the architectural tours run by Khmer Architecture Tours. They run several scheduled tours including Neo-Khmer and Colonial Architecture. If their schedule doesn’t suit, you can also hire them for a private tour. I did it with friends over one afternoon and it offered a good glimpse to the interesting architectural heritage of the city. We even got to go inside some of the older apartment buildings to see how locals live. 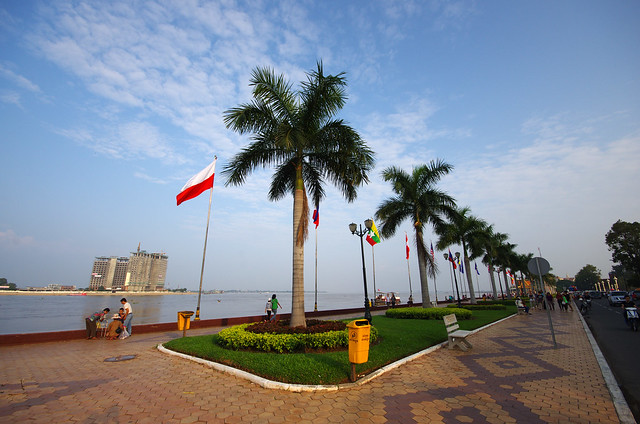 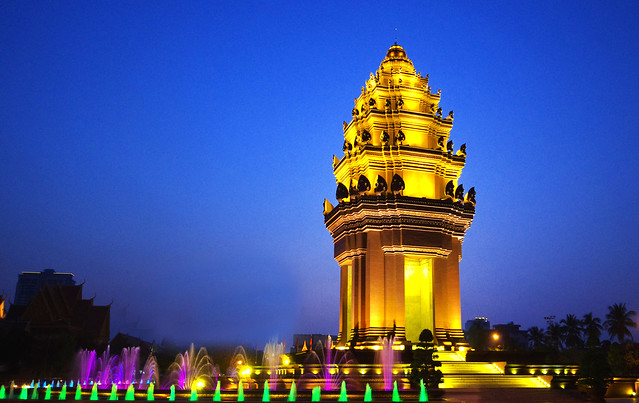 the independence monument during blue hour

Looked upon as a fine example of Neo-Khmer architecture, the Independence Monument was built to commemorate Cambodia’s independence from the French. It looks interesting during the day and spectacular at night when it is floodlit and the fountains surrounding it are turned on. The best time to see the monument is during blue hour which in Phnom Penh is usually at 6pm. 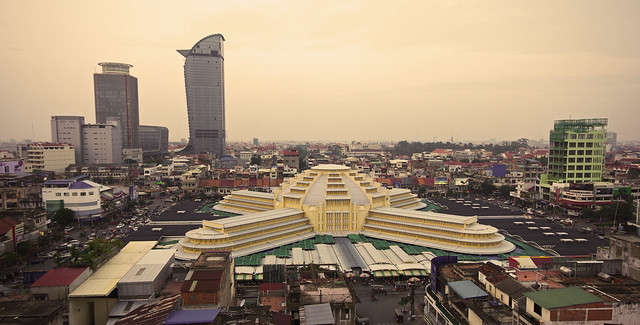 Among Phnom Penh’s markets, the two most well-known are the Central Market (Psar Thmei) and the Russian Market (Psar Toul Tom Poung). The former is as much an architectural attraction due to its yellow art deco design as it is a place to find all sorts of souvenirs, jewelries and accessories. The Russian Market is a much more humble sight, but its off-center location means that prices here are a tad cheaper to the tourist targeted shops of the Central Market.

#7 – Amok Fish, Tarantulas and Whatnot 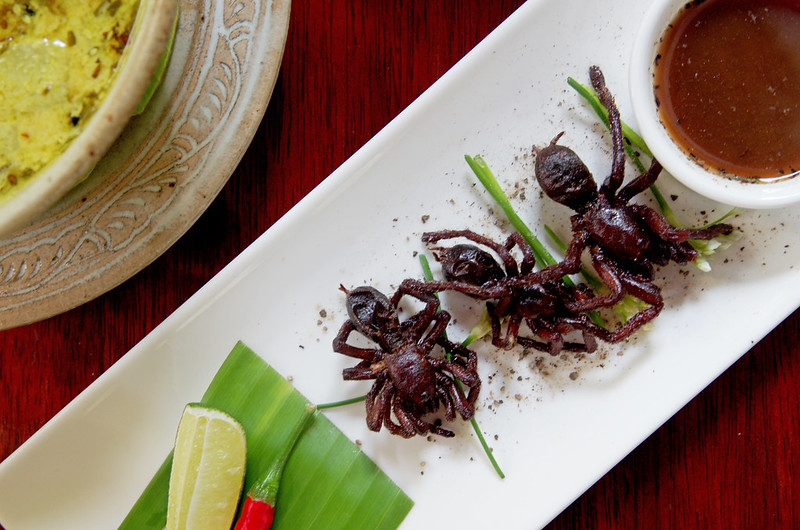 Despite the prevalence of curry, don’t make the mistake of thinking that Khmer cuisine is similar to Thai. It’s not. For one, the curries being used in Cambodia are mostly not spicy (fortunately for me) and has more emphasis on the usage of herbs. Phnom Penh has in recent years seen a rise in dining options, from French to Khmer to Vietnamese to fusion cuisine. Among local dishes, Amok fish is probably the most well-known and is available almost everywhere. That aside, the adventurous types can go for something more radical. Local restaurant Romdeng counts fried tarantulas and red tree ants (yes you heard that right!) as part of its menu offerings.

Note: I did not go to the Killing Fields or the Tuol Seng Gencide Museeum. If you wish to include these in your itinerary, you can squeeze it in the afternoon of Day 2 of the abovementioned itinerary.

Where I stayed in Phnom Penh
I stayed at La Rose Boutique Hotel during my trip which I particularly liked for its well-appointed rooms and excellent restaurants. This charming property gets booked out easily so it’s well worth reserving a room before you arrive. You can also check out some of the best deals for hotels in Phnom Penh HERE and compare for the best prices in one go.