The mix of cultures in New Orleans makes the city one of the most interesting places in the world to visit. “The Big Easy” is known for its history and architecture, music and art, and cuisine and nightlife.

There is so much to see and do that travellers return again and again to expand their explorations. With more than 1,000 restaurants and cafes, the food options alone guarantee a unique experience every time. The city is always humming with the sounds of its celebrated jazz and blues musicians, as well as frequent festivals and other events.

For those who have only three days to spend in New Orleans, here is a suggested itinerary. 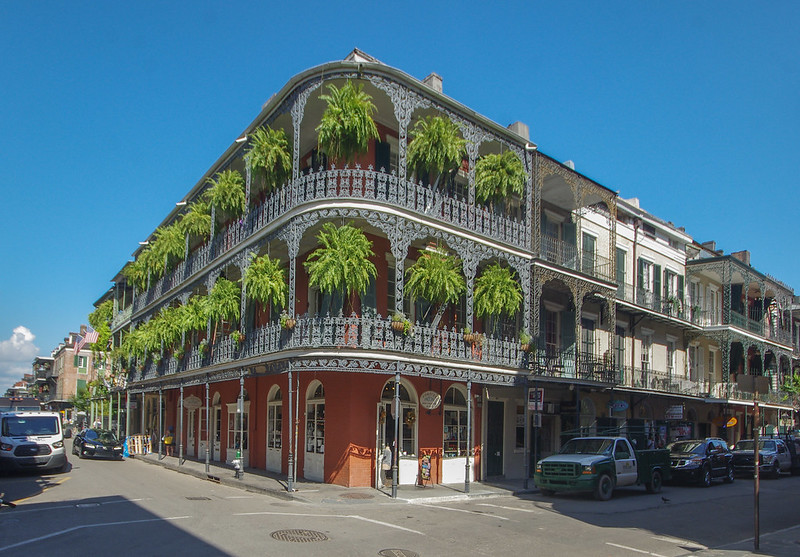 the french quarter in new orleans

There is a wide array of choices for breakfast, or brunch for late risers. The city is famous for morning specialties like the beignet, a French donut with sugar on top. Another favorite dish is creole-style eggs, which are scrambled with vegetables, capers and butter. Cafe au lait is the breakfast beverage of choice. New Orleans is also the place to find hot boudin, a French blood sausage; as well as the grits that are endemic to the southern United States. Bakeries are found throughout the city.

One of the iconic eateries, Madame Begue’s, dates to the early 20th century. It is on Decatur Street, adjacent to the French Market section of the French Quarter. This is a great place for brunch, or what the restaurant calls “the second breakfast.” It is the only meal served there, beginning at 11 a.m. A bowl of thick soup is followed by a serving of shrimp or crawfish. Subsequent courses feature snapper, trout or flounder; quail in wine sauce; a green salad; and dessert with a cup of Café Brûlot.

Heading across the street and taking a walking tour of the Quarter is a good way to work off a heavy breakfast. The ornate buildings reflect Spanish, French, Caribbean and Egyptian influences. They include multistory structures with iron-work balconies, Creole cottages and stately old homes. Styles range from baroque to modern.

Strolling through the Quarter brings a tourist into contact with quixotic street musicians and magicians who perform for loose change. Tours of the historic streets and alleys lead past churches and cathedrals, courtyards, and the former homes of famous residents like William Faulkner an Tennessee Williams. 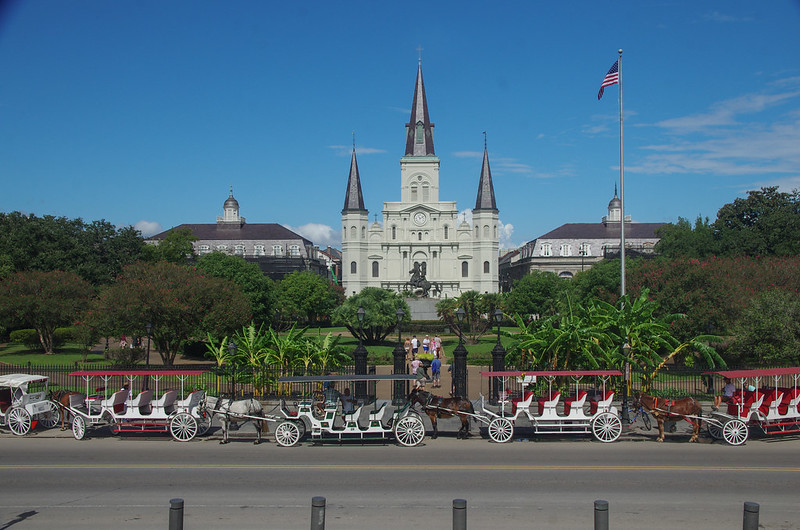 Jackson Square is a community gathering place with national historic landmark status. The park is the site of the Cabildo, an ornate structure that hosted the signing of the Louisiana Purchase in 1803. The Louisiana State Museum, inside the Cabildo, educates visitors about the city’s storied past. New Orleans history, art and culture are on display. The treasures include Napolean Bonaparte’s death mask, Native American artifacts, portraits from the 1700s and 1800s, and exhibits commemorating the Reconstruction and Civil War eras.

St. Louis Cathedral, formally called the Cathedral-Basilica of St. Louis King of France, overlooks Jackson Square. No other Catholic house of worship in the United States has been in continual operation for as long as this venerable church. It is postcard-worthy, with three towering spires rising above the city’s skyline. The 18th century Presbytere, on the opposite side of the cathedral from the Cabildo, is capped by a French mansard roof and restored cupola. It boasts a large collection of Mardi Gras memorabilia, shedding light on the annual festival’s history and traditions.

Another place featured in most commercial walking tours of the Quarter is Pirate Alley, so named because its reputation as a hangout for seafaring privateers. The block-long side street runs between St. Louis Cathedral and the Cabildo. The site’s dark history may also include the sale of slaves in the neighboring St. Anthony’s Garden, though that story is a subject of dispute. Pirate Alley is the scene of the annual New Orleans Spring Fiesta art show.

More history lessons are available at Lafitte’s Blacksmith Shop on Bourbon Street, a 1770s structure that is one of the oldest buildings in New Orleans. A national historic landmark, it is named for the pirate Jean Lafitte, who operated a business there in the early 1800s. His brother is said to have turned it into a blacksmith shop. Lafitte’s ghost supposedly continues to haunt the location.

An alternative to a walking tour is riding in a carriage pulled by donkeys or taking a streetcar. After seeing the sites on Bourbon and Decatur streets, and perhaps buying some souvenirs, it might be time for a snack. The Petite Amelie, an offshoot of the famous Cafe Amelie, serves sandwiches, soups, salads, and quiche and other pastries. 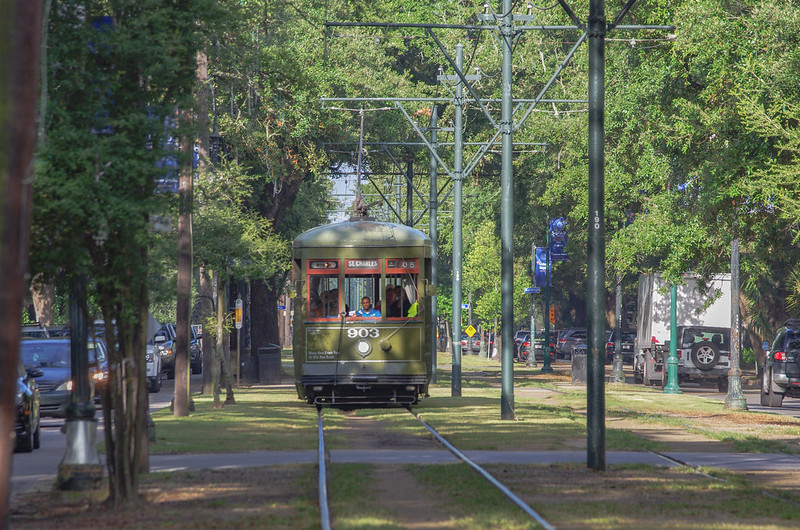 Elizabeth’s, a casual restaurant on Gallier Street, is one of the best places to try a classic of the South: a breakfast po boy. The sandwich generally contains bacon, roast beef or fried seafood, with eggs and cheese. The mixture is served atop a French baguette that is crispy on the outside and fluffy in the middle. Among other popular morning dishes at Elizabeth’s is praline bacon.

After eating, there are multiple cultural activities from which to choose. New Orleans is home to numerous museums highlighting the history of the city and state. They include the New Orleans African-American Museum, the Confederate Museum, the National World War II Museum, the Longue Vue House and Gardens, the New Orleans Museum of Art, the Ogden Museum of Southern Art, Kenner’s Rivertown Museums, Herman Grima/Gallier Historic Houses, the Louisiana Children’s Museum and the River Road Museum. Other attractions are Mardi Gras World, the Audubon Zoo and Aquarium, and the New Orleans Botanical Garden. 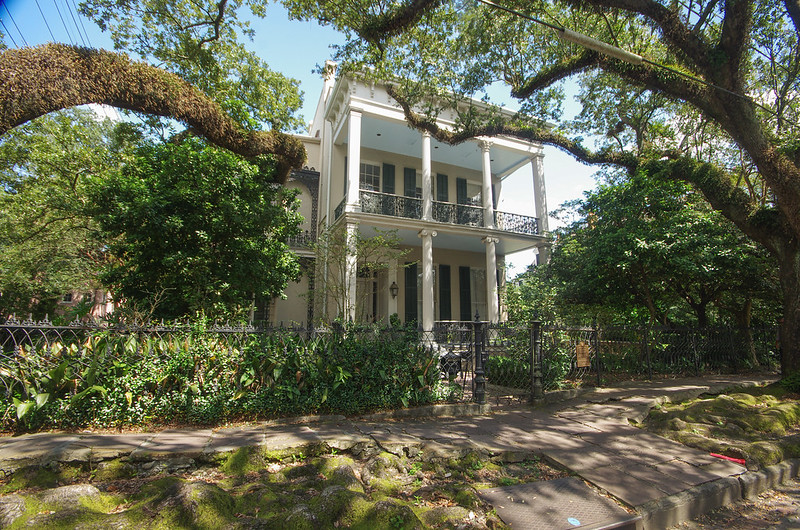 famous home in the garden district – the anne rice house

The Garden District is a network of oak-lined streets with old mansions and lush landscaping. Lafayette Cemetery has elaborately decorated 1800s tombs. Area restaurants, cafes and bars offer a variety of choices for lunch. Audubon Park is another pleasant outdoor space, with paths for walking, jogging or bicycling. There are picnic shelters, tennis courts, playgrounds and a lagoon. City Park, a 1,300-acre green space, is the site of more old live oak trees than anywhere else in the world. 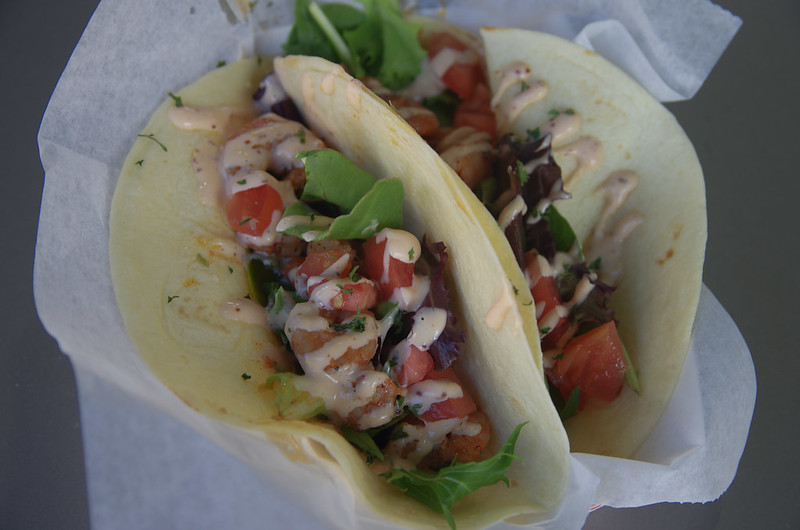 trying out the food at the french market in new orleans

The French Market’s Shops of the Colonnade are stores that sell souvenirs, gifts, clothing and other items. One of the premier cups of coffee in the city is at Cafe Du Monde, which has been serving cafe au laits, chicory coffee and beignets for nearly 160 years.

It is extremely difficult to decide where to eat dinner in New Orleans. Individual tastes and budgets are key factors. According to Brett Anderson, a restaurant critic for the Times-Picayune newspaper, two of the best spots are Bayona, with specialties such as P & J oyster gratin, goat cheese crouton, veal sweetbreads, sautéed redfish, peppered lamb, and apple hazelnut tart; and Brennan’s, with its seafood gumbo, frog legs, smoked and roasted duck breast, Gulf fish amandine, spiced tuna, and bananas Foster.

Most visitors spend their evenings in The Big Easy, where jazz was born, enjoying music. Nightclubs and dance halls thrive in the French Quarter. Blues artists, brass bands and Zydeco musicians are among the many types of performers. A must-see venue is Preservation Hall, the home of New Orleans jazz. 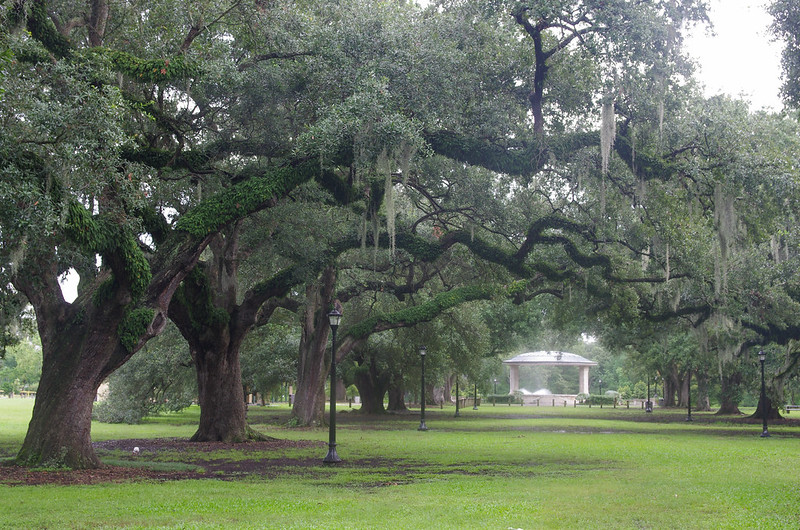 A trip to New Orleans should not be limited to the city. The surrounding area is teeming with history, culture and natural beauty. Visitors can get a glimpse of post-Civil War life in the region by touring one of the old plantations on River Road. The restored Houmas House and Gardens is among the most interesting. There are restaurants and cottages on site.

The 24-mile Lake Pontchartrain Causeway, the longest bridge over water in the world, leads to shops, cafes, bed and breakfast operations, and other attractions. The Global Wildlife Center preserve provides habitat for bison, giraffes, camels and other wildlife. Also just across the lake is Fontainebleau State Park, with 2,800 verdant acres.

Tourists can get up close and personal with alligators and other wildlife by taking swamp tours. The Steamboat Natchez Harbor Cruise, and the Swamp and Bayou Boat Tour, are particularly popular. Avery Island is the site of plantations, gardens, and the town of New Iberia’s historic Main Street. Lejeune’s Bakery in Jeanerette has been serving French bread and ginger cakes since 1884.

Among the many fascinating communities in the region is Lake Charles, known for its history, Cajun culture, architecture, fine dining and casinos. The Creole Nature Trail Adventure Point, as well as the Creole Nature Trail, allow tourists to see a wide array of fauna and flora.

Where to Stay in New Orleans

New Orleans offers a variety of lodging, from budget motels to luxury accommodations. There are bed and breakfasts, upscale rooms in the French Quarter, and nice hotels in the Garden District. I stayed at the Hotel Mazarin which was very convenient as it is situated right within the French Quarter and commuting to the Garden District was also a breeze with the streetcar station only two blocks away. Rooms are spacious and are done up in an old-world manner even though the hotel itself is relatively recent. You can also check the best prices for other New Orleans hotels here.

Foreign visitors to the United States who do not have visas must apply ahead of time through the Visa Waiver Program (VWP) of the Electronic System for Travel Authorization (ESTA) system. Authorities review applications to determine eligibility.

You can Check ESTA online with required documents include a PayPal account or a valid credit card (MasterCard, VISA, American Express, Discover, JCB or Diners Club). Applicants must provide contact information and pay $14 in fees. Those who earn ESTA status are limited to 90 days of business or pleasure in the United States per trip, though multiple visits are permitted. The document is valid for two years or until a person’s passport expires.

ESTA is not a substitute for a visa in all instances when a visa is required. Visa holders do not have to apply for ESTA. VWP applicants with or without ESTA must fill out a blue customs declaration form when they arrive in the United States, but no longer have to complete the green I-94W card.

A new ESTA is needed when a traveller gets a new passport, changes his or her name or gender, changes national citizenship, is convicted of a crime, or contracts a contagious disease.