CitizenM New York Times Square is the first CitizenM property in New York City. A relatively new entrant in the hospitality scene, the CitizenM brand has been making waves since it launched its first property in Amsterdam in 2008. It positions its hotels in the affordable price range while offering heavily design-conscious fittings and high-end aesthetics. Self check-ins and the lack of a conventional front desk are hallmarks of the brand. During a trip to New York City, I wanted to see for myself how the proposition works and checked myself into their Times Square property for a night. 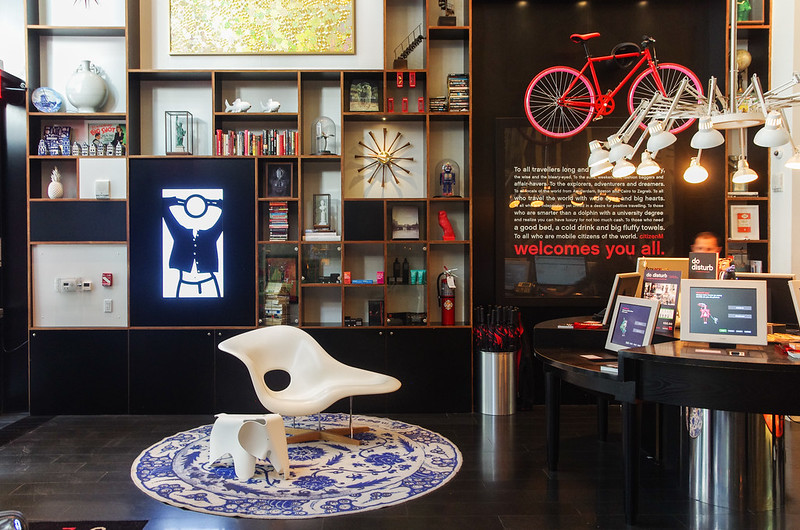 As mentioned, you check yourself into the hotel. I found a round table filled with around 8 computers when I entered the lobby. Self check-ins are almost unheard of in the hospitality industry (maybe except in Japan) but thinking about it, at least you won’t find yourself stuck in long queues. If there’s a problem, there’s always one or two “ambassadors” manning the booth to troubleshoot or to answer questions about going around New York City. They don’t act as your conventional reception or concierge or even bellhop. CitizenM deliberately hires actors instead of people coming from hospitality backgrounds to fill the part. 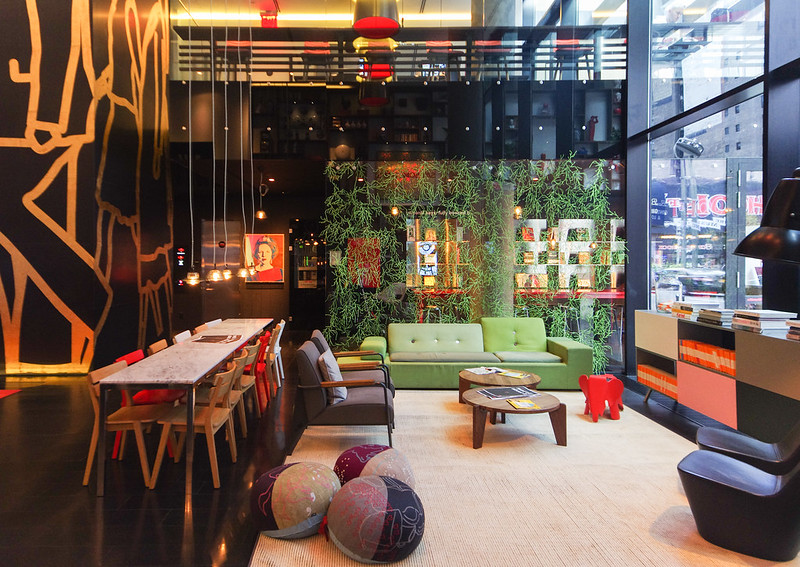 The lobby – which looks more like the living room of some young artsy millionaire – is perhaps the coolest hotel lobby I’ve seen so far. It’s filled with books, photographs by Andy Warhol and decked with some seriously funky furnishings of varying shades (think: pop art painting of Queen Beatrix of the Netherlands and a stool in the shape of an elephant). If I wasn’t on a whirlwind trip around New York, I would have loved to spend more time exploring every nook and cranny of this property. I could spot several guests just lounging around in the lobby or at the alfresco space with a book or laptop in tow.

Knowing that the staff members were made up of actors or drama school people, I was initially concerned that I might get a diva attitude from some of them. Fortunately, I saw none of that. If anything, I found the people working there to be extra friendly and highly personable, always greeting me whenever they see me but instead of addressing me as “sir,” they would call me “buddy” which I guess is in keeping with their branding. I guess that’s also why they decided to stray away from typical hospitality professionals. 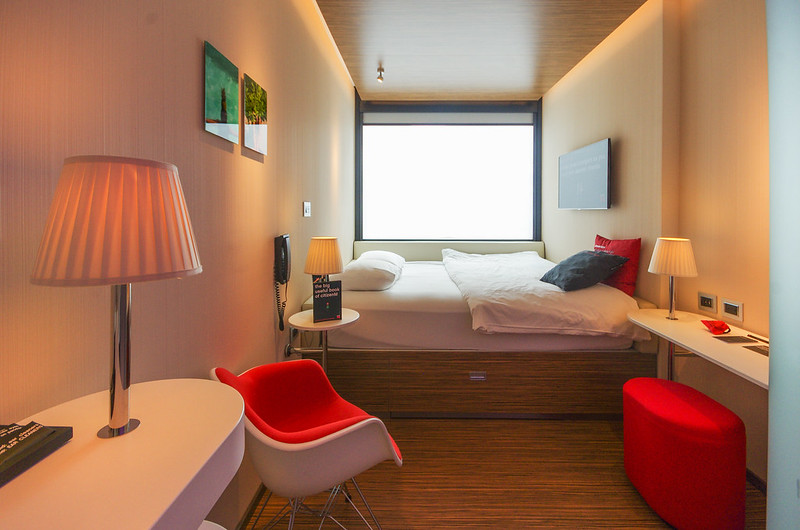 The rooms at CitizenM New York Times Square are small but they are stylish with a clean and futuristic look. The interiors are decked in pure white with occasional colors here and there. The bed is situated at the far end of the room by the window and can be entered only from one side. Despite the modest size of the room, the bed was still king size. 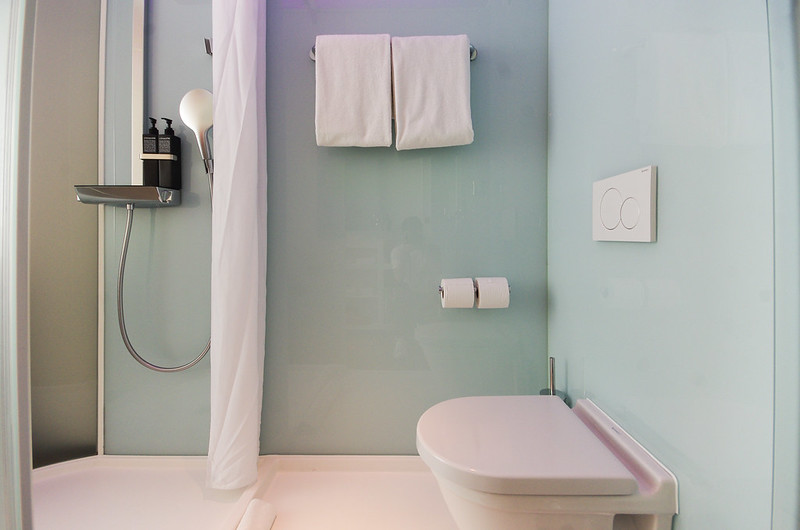 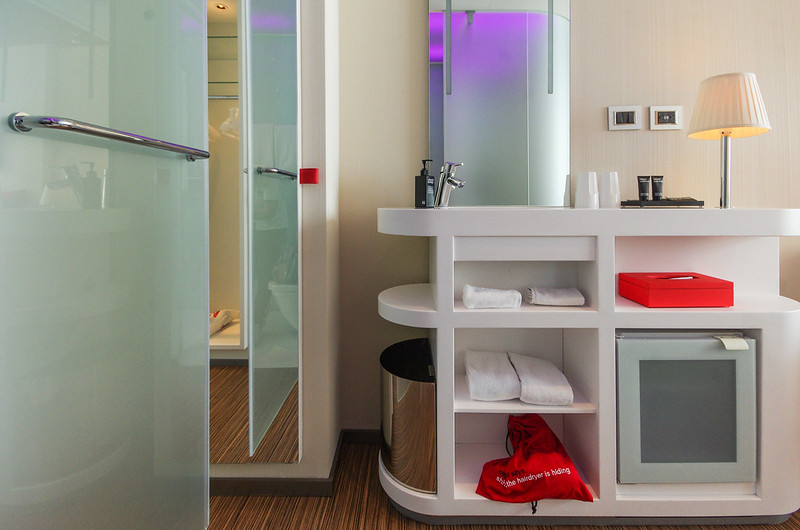 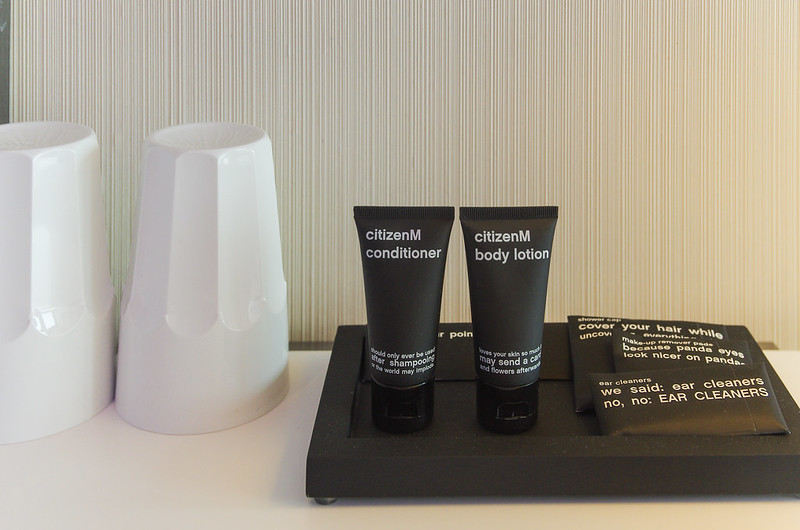 The shower and toilet are situated in one enclosure – separated from the rest of the room by frosted glass. The vanity area is situated in the room itself. Toiletries are from the in-house brand. Curiously enough, they provide two types of shampoos here – one for the morning person and another for the evening person. What special ingredient they put to differentiate the two, I’m not entirely sure. 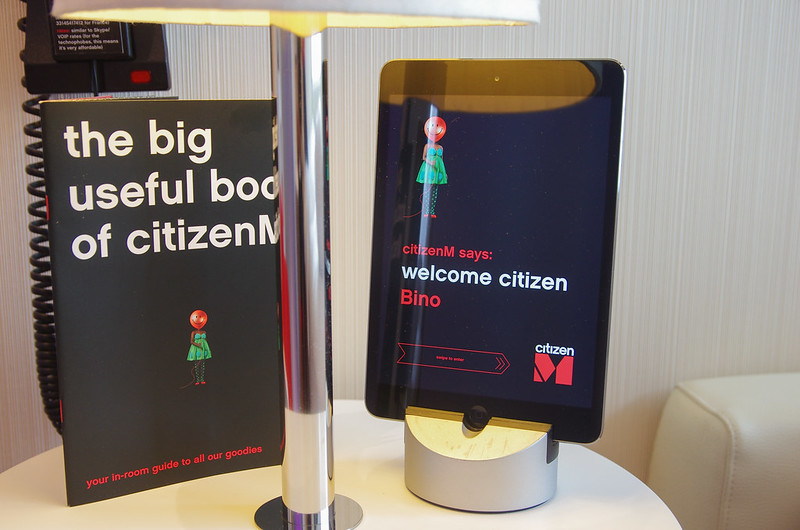 One of the key differentiating factors of the room is the handheld tablet – they call this the MoodPad – from which guests can control just about everything – from room temperature to TV remote to even the mood lighting in the room (with settings such as romance and party to choose from). It’s quite a nifty little device. Just don’t get too carried away playing with it all night. 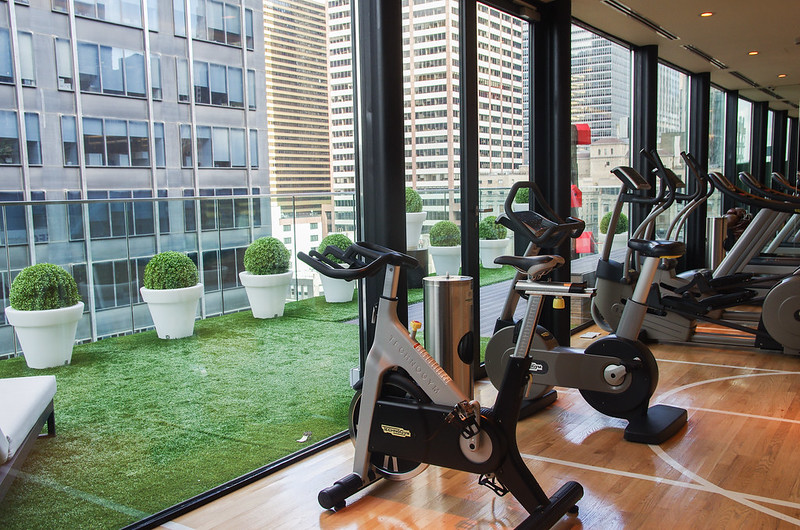 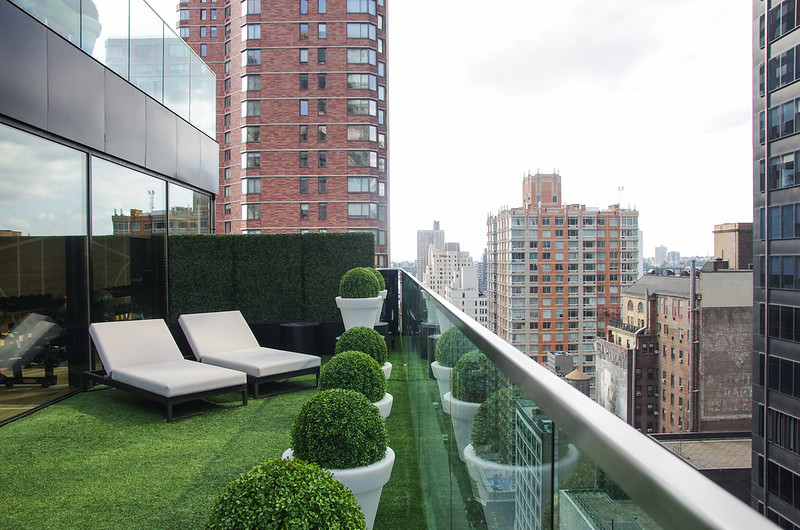 Guests can make use of the gym that comes with dramatic views of the New York skyline. Like the rooms, it is of modest size but has all the equipment you need for a workout while on holiday. There is also an outdoor sun deck and yoga area where guests seem to congregate to take selfies. 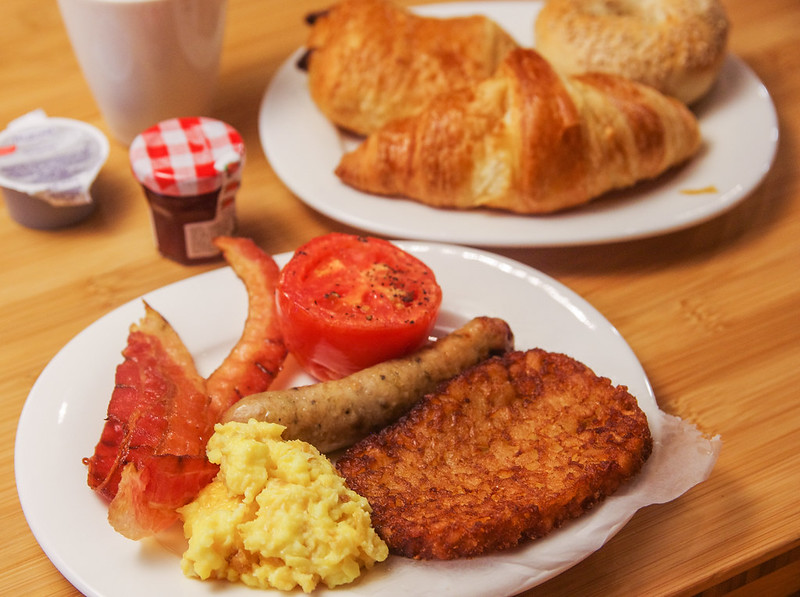 My stay came with breakfast which could be booked in advance at a discount or on the spot. The spread consisted of a variety of hot items such as pancakes, bacon, sausages and scrambled eggs. There was also a good number of pastries available, including bagel (this is New York after all), croissants and pan au chocolat. This, along with the freshly made coffee, made for a good start to the day.

This, folks, is the hotel for the no-nonsense millennial. The property is without a doubt fascinating and quite unlike other hotels. One does not have to stay too long to appreciate the coolness factor permeating every square inch of the building. CitizenM makes for a great counterpoint to the usual chain hotels with its own interpretation of “no frills” and it adds a fun and vibrant dimension to an otherwise rudimentary hotel stay.

I was hosted by the property. However, all opinions are my own