Kinki is an urban Japanese restaurant and bar located at the 2nd floor of Customs House in Singapore’s Marina Bay, just a few steps from Fullerton Bay Hotel. Just from the name alone, it is not difficult to surmise the venue’s departure from conventional Japanese cuisine. Yes, you do get your sushi rolls, tempura and unagi but it all comes with a twist. This premise seems to be a hit with the local market, as Kinki has been standing in its present location for over 11 years now, outlasting many of the other tenants at Customs House that have come and gone. 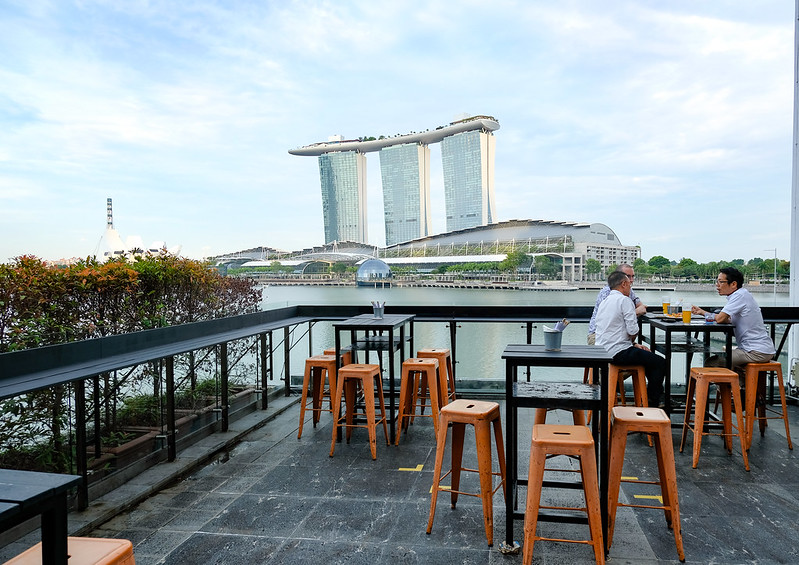 The restaurant’s proximity to Raffles Place and the office crowd means that aside from serving good food, a proper drinks environment is also a must and Kinki fulfills that through its 3rd floor rooftop bar with breathtaking views of Marina Bay. If you are coming to Kinki for drinks, you’ll find that the food pairs well with alcohol – fortunately doing so by providing so much more than the usual nuts, fries or chicken wings that you’d find in other bars.

Kinki has relaunched in Feb 2021 with a slight change in the aesthetic. Gone is the sumo wrestler that used to grace the restaurant’s logo. This has now been replaced with a geisha which shows itself through the artworks in the walls and even in the names of the some of the drinks. Along with this, the restaurant has introduced some new items in the menu and I had the opportunity to try these for dinner alongside some of their popular evergreen dishes.

These are the top dishes to try at Kinki Restaurant and Bar: 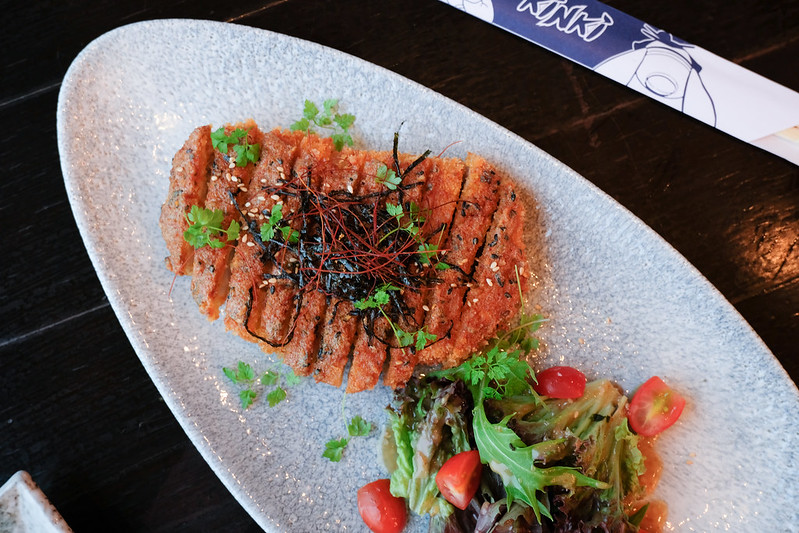 Here, Nagano pork is used due to its tenderness and superior marbling. It comes with a small side of salad. It’s best eaten immediately upon serving to fully enjoy the crispy panko (breading) that fills the exterior of the meat.

Why it’s a must-try: What makes this katsu special is the sauce on the breading. There’s a spicy element here that sets it apart from the usual take of this pork dish – a mixture of Buffalo wings-inspired marinade of Tabasco sauce, chili powder, Tonkatsu sauce and unsalted butter. 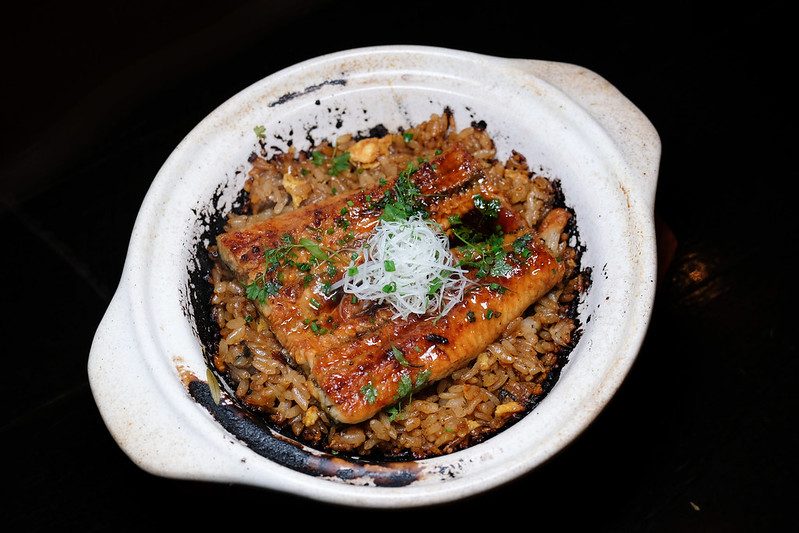 A remake of the beloved local claypot rice, this version replaces the usual chicken with a generous serving of unagi. The sauce used here also differs from the one typically found in claypot rice. Instead, it’s Kabayaki sauce that turns the rice into a deep brown.

Why it’s a must-try: The char here is just perfect. I personally loved eating the rice crispies alongside the flavorful and succulent unagi. 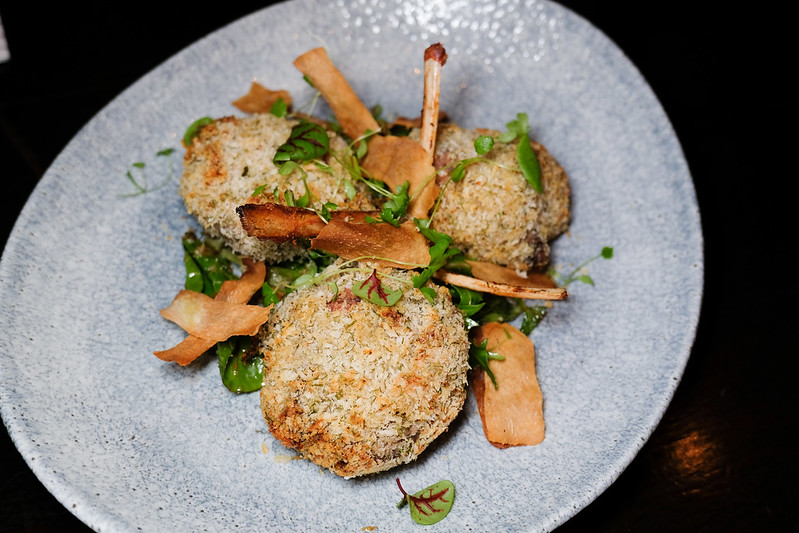 Australian lamb chops are wet-aged in a koji yeast brine to tenderize the meat. It also comes coated with panko and mentaiko, the latter supposedly to reduce the gamey flavor, before being baked.

Why it’s a must-try: This is my favorite dish among those I’ve tried at Kinki. At first, I had to admit I didn’t quite know what to make of eating lamb in a Japanese restaurant but this was done well. The meat wasn’t gamey – presumably due to the mentaiko. While the usage of panko as a means to make this dish more Japanese may sound kitschy at first, it does enhance the flavor profile especially when consumed along with the ginger. I also enjoyed the added crispiness and noted the counterpoint to the conventional herb crust in lamb chops. 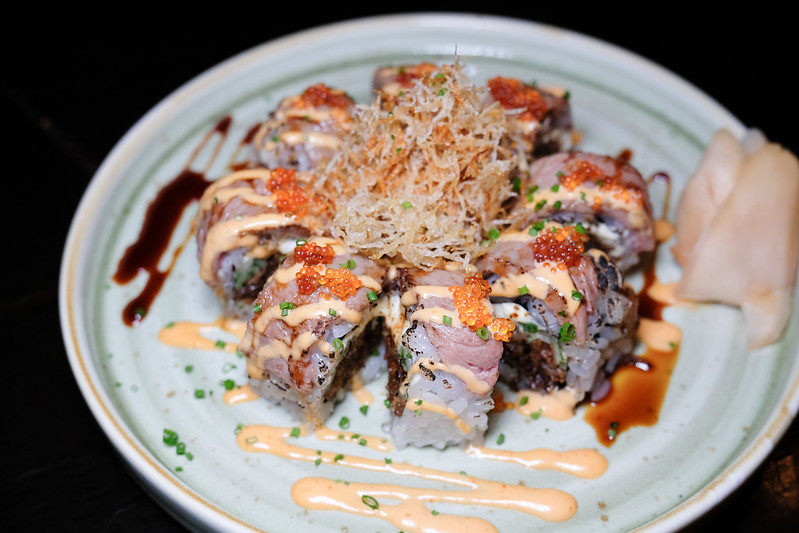 They use no less than A4 wagyu for this particular rice roll. The thinly sliced meat is seared before filling the exterior of the roll. Inside, there’s cream cheese and cucumber while tobiko, potato floss and a homemade spicy mayo & soy reduction are sprinkled wantonly for that added kick. Each order comes with 8pcs of rolls.

Why it’s a must-try: This was just heavenly. It’s like eating the best part (read: sans the bun) of a tiny wagyu burger in one gulp. 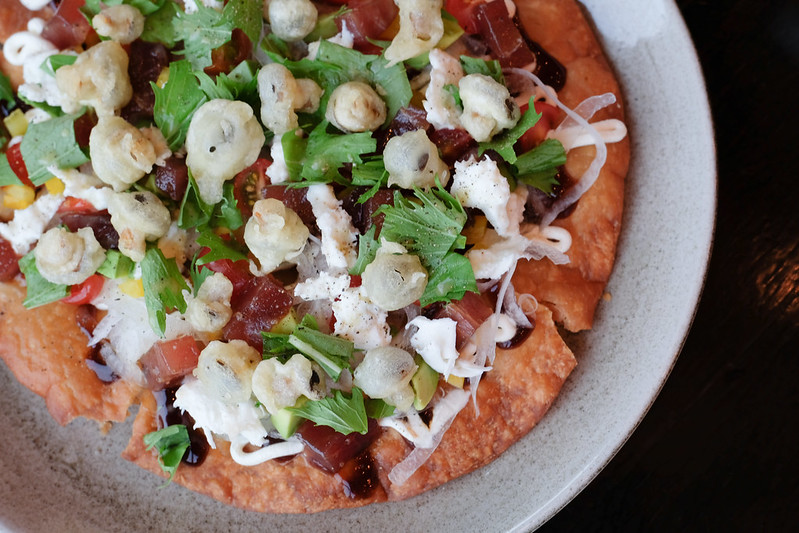 A starter like this goes to show how much liberty and perhaps humor the culinary team aims to display in their interpretation of “urban Japanese.” The presentation is akin to an extremely thin crust pizza, and those who have not seen the menu might think the same upon biting on the tortilla. On top is a mixture of soy aged bluefin tuna, avocado, mizuna, yuzu citrus, sriracha soy and microherbs.

Why it’s a must-try: An explosion of flavors with each bite, this is great for something light and refreshing at the start of dinner or if you are simply looking for light bites to go along with your after work drinks. 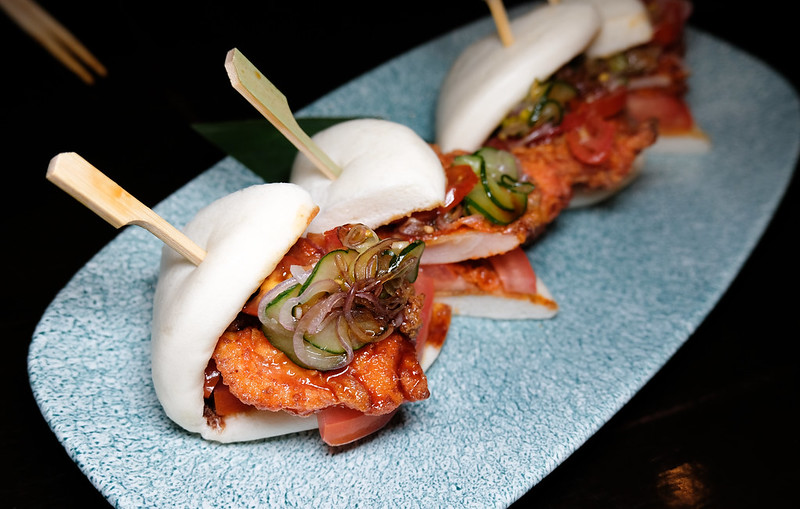 At first, I thought it was some kong bak bao reinvention but similarities end in the type of white bun used. Inside, there’s juicy fried chicken thigh and sweet soy and finished off by pickled cucumber and momotaro tomato for that added texture.

Why it’s a must-try: The secret here is the marinade. Gojuchang or Korean chili sauce is embedded into the chicken before it is breaded in panko crumbs and deep-fried, giving you an instant kick the moment you bite into one of these. 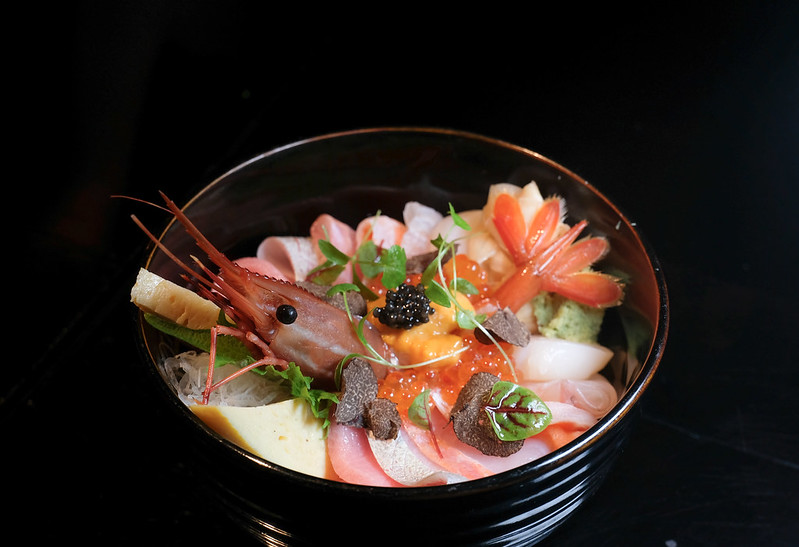 Why it’s a must-try: Don’t be fooled by the gimmicky name. Kinki’s Chirashi Don is as serious as chirashi dons go with its myriad of premium sashimi (at least 7 kinds of seafood). 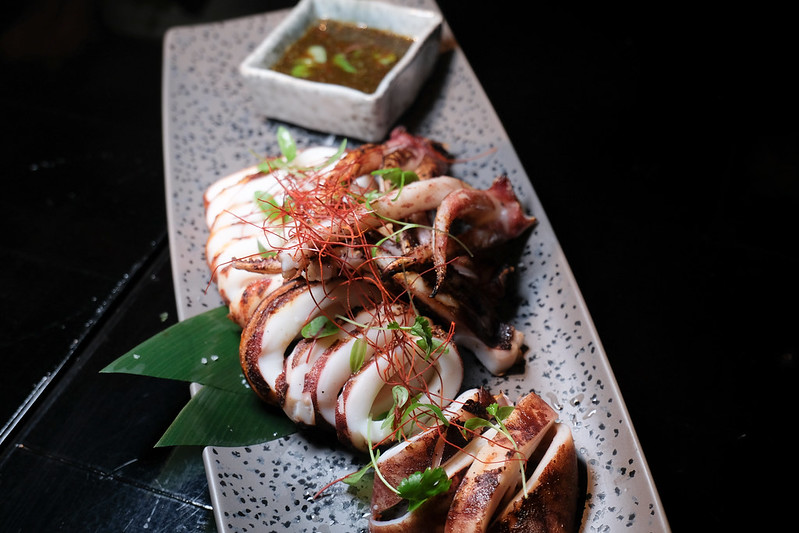 Here, Japanese squid is charcoal-grilled and served with a homemade Chimichurri sauce. While the squid was sufficiently bouncy, it is this sauce that is the highlight of the dish. Kinki’s take on the Chimichurri sauce is a refreshing Asian version made by blending big red and green chillis, lime juice, coriander, salt, and brown sugar.

Why it’s a must try: Who does not love a nicely grilled squid? Personally I prefer it with just the right amount of smokiness without being burned to a crisp and the folks at Kinki were able to execute exactly that.

The bar is open from 5PM to 10:30PM from Mondays to Saturdays