The Spot opened at the new Marina One recently with a positioning that makes it as much a restaurant as it is a nightlife venue. With a relatively generic name, one would be forgiven to be skeptical about the type of food served in its premises, much less its price range. But The Spot aims to be just that – a place to do it all. In the morning, diners can grab breakfast and coffee (which comes from Toby’s Estate). In the evening, guests can opt for one of the set dinner menus or grab a cocktail or two. Those who appreciate the finer things in life can even book the intimate cigar lounge that has a direct connection to the 1855 The Bottle Shop next door.

This is all possible within a 3500 square feet of space in the middle of the bustling CBD. Indeed, a number of restaurants have come up in Marina One recently including the steakhouse, Wakanui, that folks who work there are literally spoiled for choice when it comes to dining options. I was recently invited to head down to The Spot one evening to check out the menu. I have been hearing good things about the Southeast Asian-tinged cuisine here, conceptualized by Executive Chef Lee Boon Seng from Osia and Curate. At the centerpiece of his culinary concept for The Spot are the sauces which are all made from scratch in the kitchen. 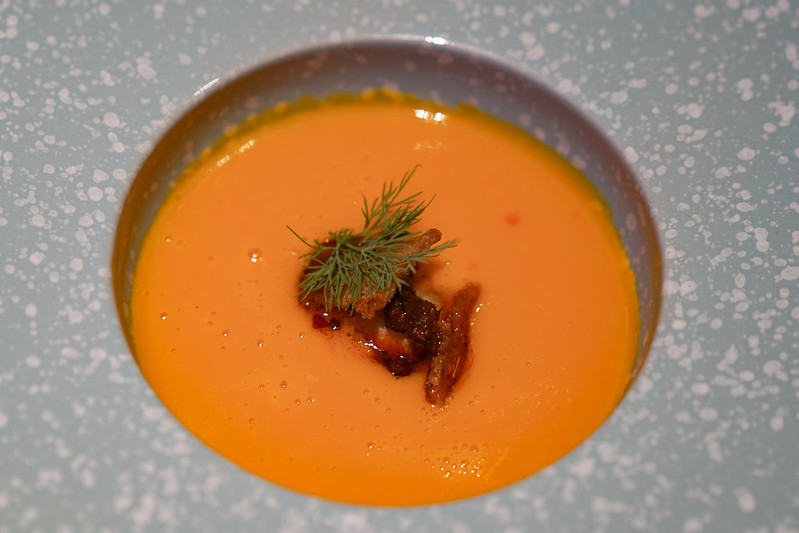 I started my dinner with a Roasted Carrot Soup ($18) which was a surprise with its tangy flavor brought about by the Kaffir lime leaves. It’s also not as heavy as what one would expect for a cream-based soup. Upon serving, you’ll find the lemongrass chorizo prawn salsa concentrated in the center. Make sure to spread it around for an added meaty tinge. 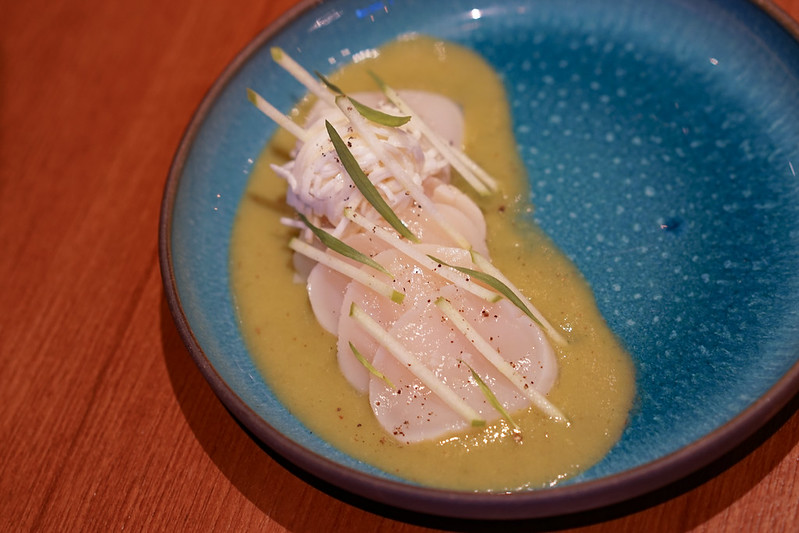 I love good scallops and found the Scallops Carpaccio ($30) here to be a bit of a contradiction. I loved the plump and large scallops that were flash-steamed and thinly sliced. To me, that was enough and I enjoyed the scallops thoroughly. It did also come with buah long long (ambarella) vinaigrette which I thought was a tad overpowering. This was a dish I enjoyed sans the vinaigrette. 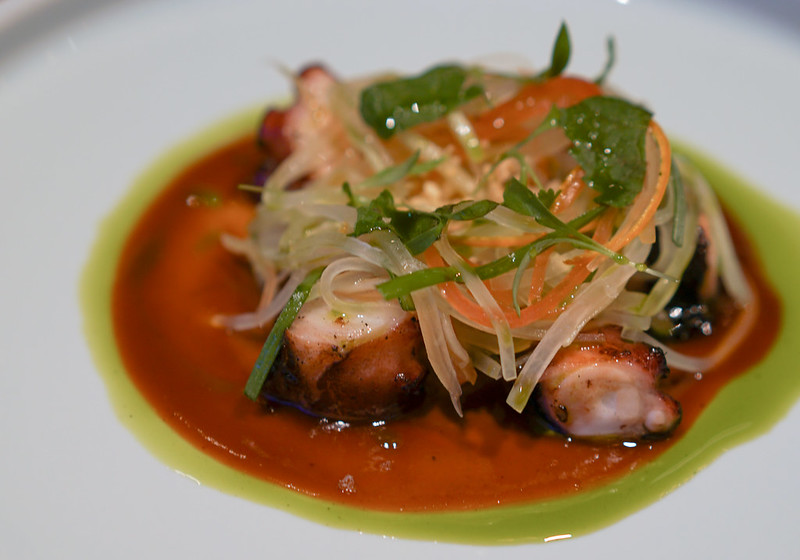 The Charred Grilled Octopus ($25) is made up of a single tentacle that is cold marinated in oil infused with kaffir lime leaves, lemongrass, garlic and shallots for a minimum of 1 day. It comes slathered with miso emulsion and green papaya slaw which I thought was a nice combination and added complexity to the dish. My only gripe is that some parts of the tenatacle had a rather rubbery texture and entailed a bit of chewing to swallow. Otherwise, it would have been a great dish. 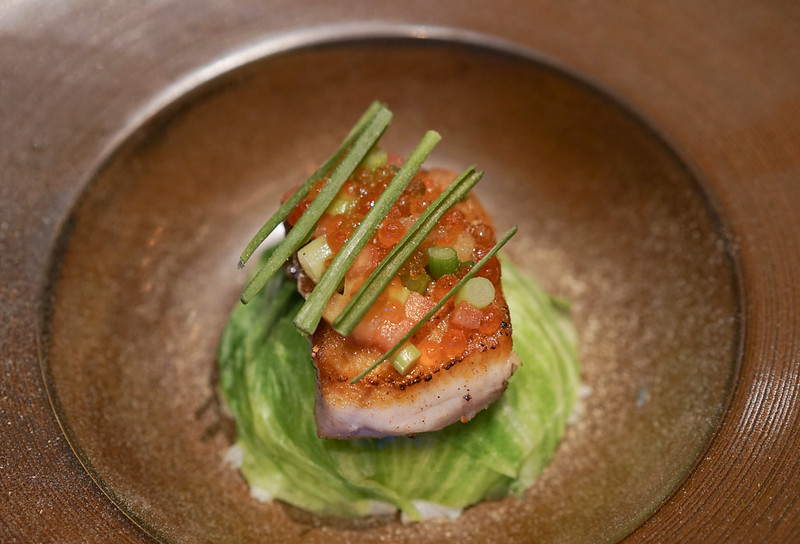 It is in the mains where The Spot really shines and the four that I tried were all winners in my view. In particular, the Local Skate ($25) may initially deceive with its vividly western presentation. However, grab a spoonful of the broth and you’ll soon have a good dose of Southeast Asian warmth in your mouth – not too dissimilar from a hearty porridge. The broth is made from fish stock, tomatoes, ginger as well as coriander oil – the latter which is particularly noticeable in the soup. Normally, one may expect to find steamed fish to go with a dish like this but here, the skate is pan-fried which I thought served as a nice juxtaposition of textures. Overall, this main may not be positioned as a soup but I do think it is the broth that truly makes it shine. 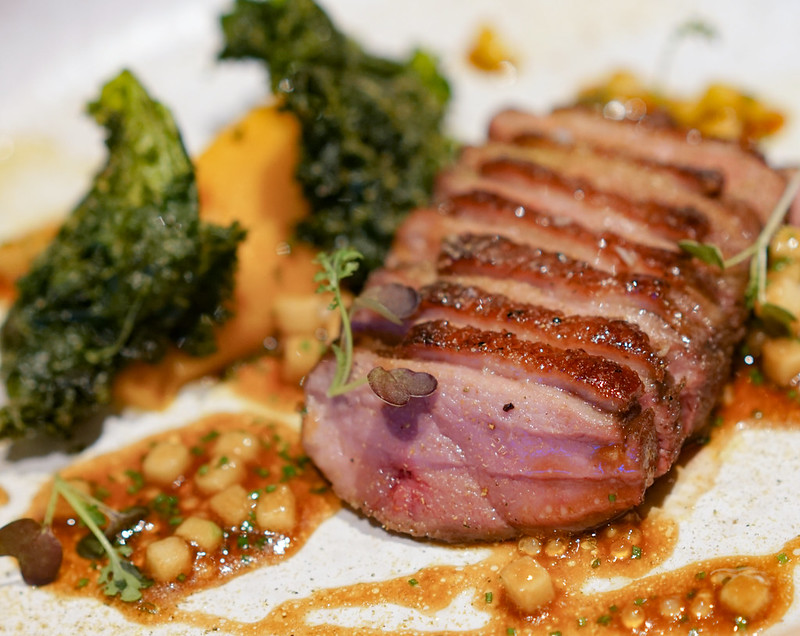 There are several layers to the Glazed Local Duck Breast ($28) that makes it akin to a modern-day version of the traditional roast duck. My favorite dish that night – the duck here is sous vide, seasoned and then seared until the skin is crispy. Aside from the tender duck meat, what is really special about this dish in my view is the presence of two different sauces. The skin is coated with a housemade version of chrysanthemum honey glaze while the meat is made to go with plum ginger vinegar. The duck also comes with crispy kale on the side which I thought was excellent on its own. 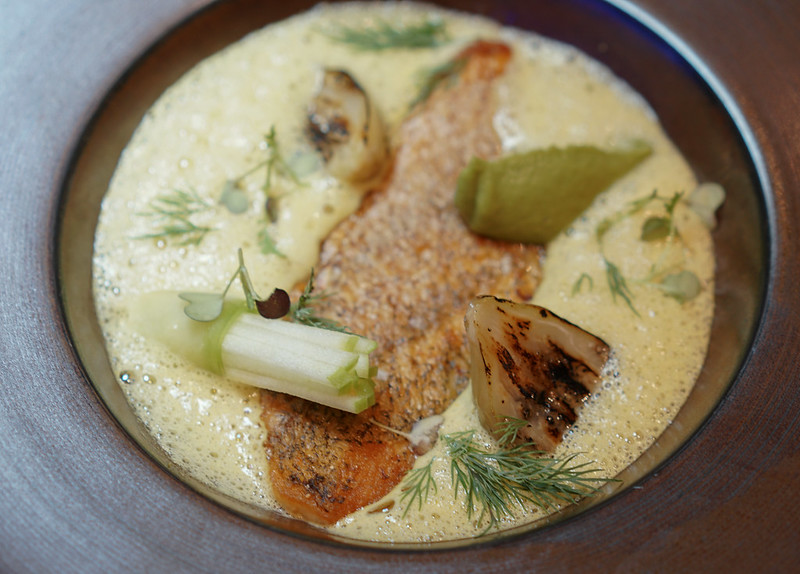 If you’re seeking a hint of Thai, the Pan-fried Red Snapper ($28) is a recommended dish for its curry. I normally don’t consume the curry on its own but I found the green curry here to be quite addicting. I imagine it would go well when slathered on to a bowl of plain rice. 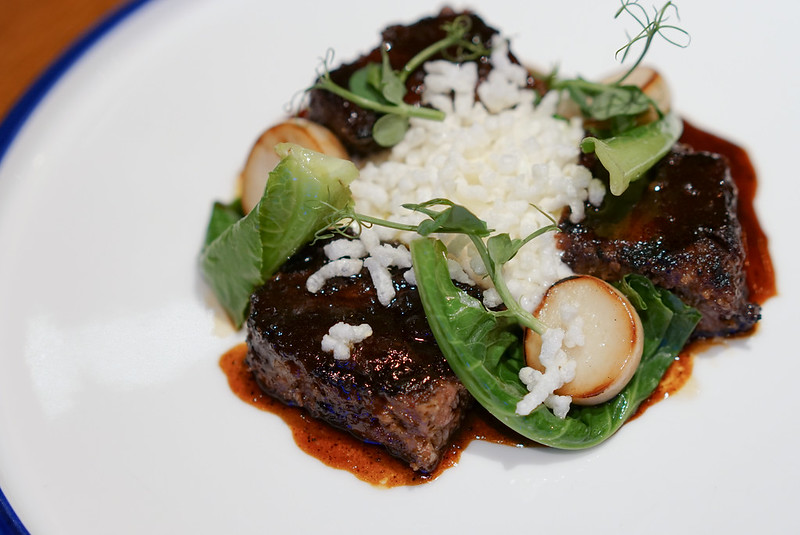 A highlight of the Beef Short Ribs ($40) is the contrast of textures with the presence of rice crispies as a side to the meat. It was only after devouring the beef that I came to realize why this juxtaposition worked – the beef was unbelievably tender and the Java long pepper sauce used to create it only served to enhance the flavor. 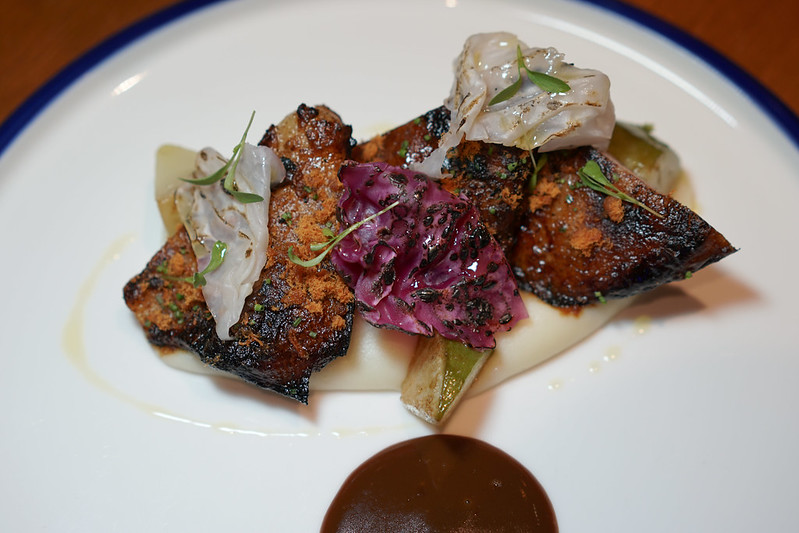 I must admit I am a bit biased about the Pork Cheek BBQ ($26) so my assessment of it probably won’t resonate with many people. For a start, I loathe bak kwa and despite the tender, sous-vide texture of the pork cheek; I did not really enjoy the bak kwa flavor here which was quite prominent. 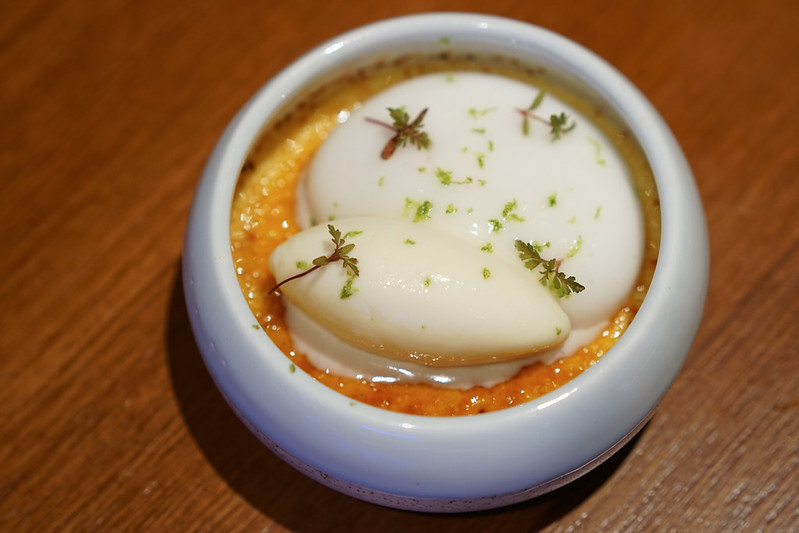 I tried two of their desserts – Licorice Root Ice Cream ($15) and the Sea Coconut Brulee ($14) and I must say I really enjoyed the latter that I could have easily devoured the whole bowl. This isn’t your typical creme brulee and the presence of an egg yolk mixture and a tangy if not refreshing kaffir lime foam attests to this.

Overall, The Spot is one of my favorite new restaurants in Singapore this year. The name may not easily resonate with most as a place to go for great cuisine but I would have to say that is a spot you really need to check out. It’s well worth the trip to the CBD.