Mention Fat Cow and the first thing that comes to most Japanese food lovers’ minds are the venue’s famed wagyu beef bowls. Despite being tucked away in an unassuming location within Camden Medical Center – around 15 minutes walk from the nearest MRT station – Fat Cow has flourished during the past five years with its omakase usually listed as one of those that you simply must try in Singapore.

Entering Fat Cow for the first time, I found the aesthetic concept quite traditional with plenty of Japanese wooden touches and separate dining rooms for guests having the omakase and ala-carte dishes. The omakase counter is relatively intimate with just 8 counter seats that face the chef. I was there on a Monday evening but found 6 out of the 8 seats occupied for the omakase. 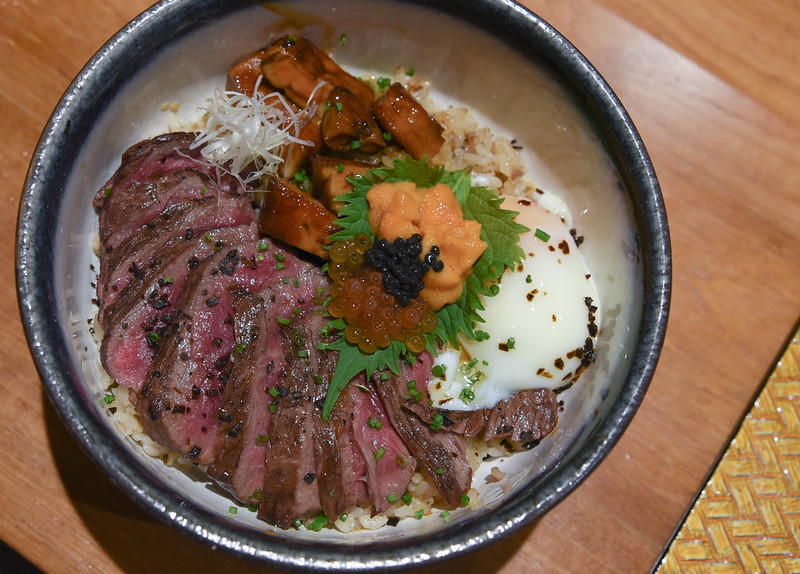 This was my first ever visit to Fat Cow and aside from the omakase, I wanted to try the wagyu donburi that everyone’s been raving about. The Fatcow Premium Donburi (S$98) is an exaggerated version of the beef bowl. First of all, the serving size was markedly larger than the usual Japanese rice bowl. Secondly, not only did it come with wagyu beef slices but it also included toppings such caviar, foie gras, onsen egg and uni. This was by far the most gratifying beef bowl I’ve ever had and the most unforgettable, too. The Australian sirloin slices were fine without being too thin, The fibers broke apart easily upon consumption – an indication of the MBS 5 score – and the amount of each topping was relatively generous. 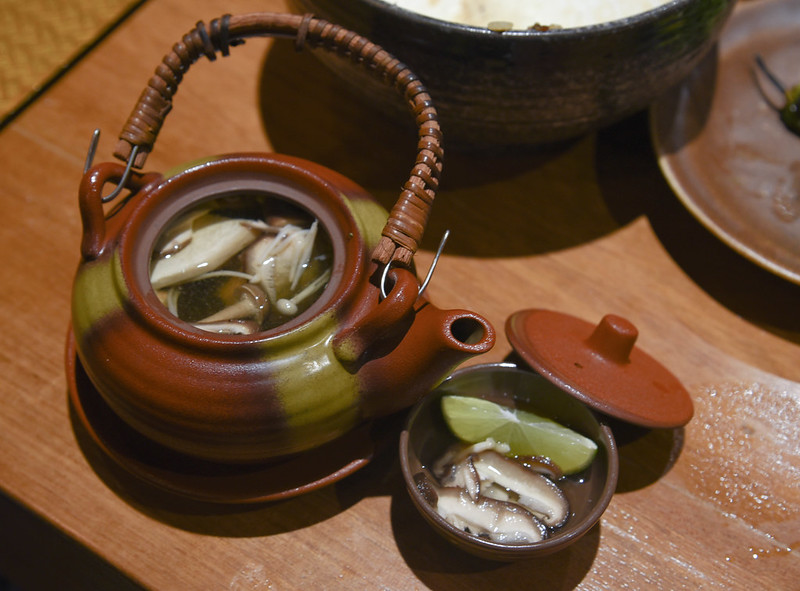 Another dish I tried in the ala carte menu was the Dobinmushi, a traditional seafood soup served in a uniquely dobin teapot. This allowed certain parts such as the lid to double as a small bowl to pour and then sip the soup from.

Fat Cow serves different types of omakase starting from S$80 per person for lunch and S$180 per person for dinner. For this particular sitting, I had the omomuki omakase (S$180 per person) which includes an amuse bouche, a soup, 3 appetizers, 2 sashimi, 6 types of nigiri sushi, miso soup, omelette and dessert. It reads like an overwhelming meal at first with 15 courses but these are served in light portions to allow diners to enjoy the various dishes while talking business or simply catching up with friends. 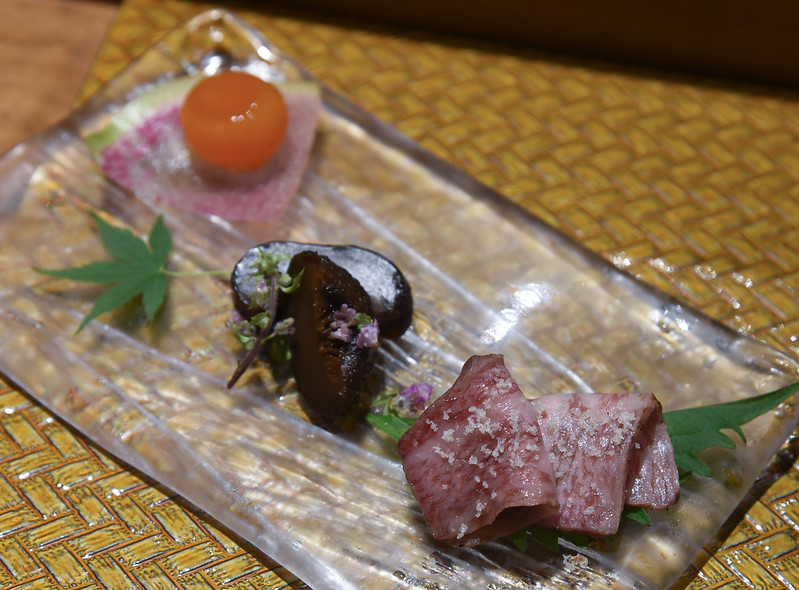 The amuse bouche and soup were served together, the former being a trio of marinated egg yolk, shiitake mushroom and wagyu tataki. While it is easy to simply assume that the wagyu would be the highlight of three, I was pleasantly surprised by the sweetness of the shiitake. That, accompanied by its chewy texture, was simply a delight to the palate. The thin slices of wagyu tataki were lightly salted and served mostly as a teaser for what’s to come. 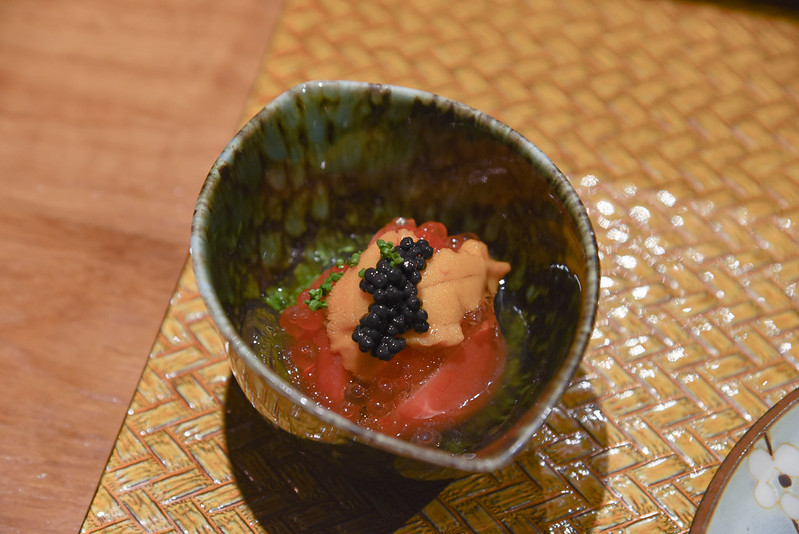 Next came the appetizer, tomato and tosazu jelly with slices of uni and caviar on top. The winning formula here is the chef’s dashi which juxtaposed nicely with the sour tomato and rice vinegar. The taste was the result of the tomato undergoing a couple of days of marination under the dashi broth and I would recommend eating the dish together to really feel the buzzing contrast in flavors. 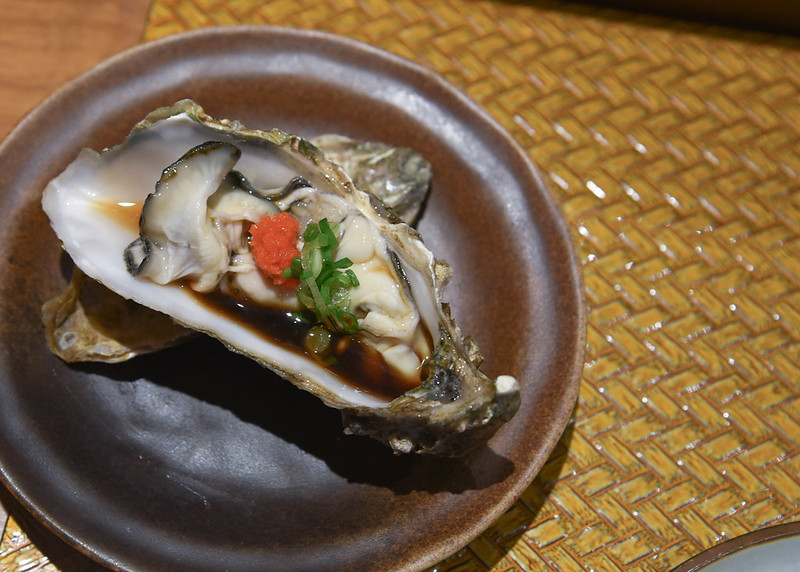 The next appetizer that came was a large oyster topped with chili radish and spring onions. Under the omomuki omakase, I was supposed to get monk fish liver instead but the chef was probably feeling generous that evening to hand me this plump piece of shellfish. The creamy flesh immediately burst out as I sunk my teeth into it. I’m definitely not complaining. 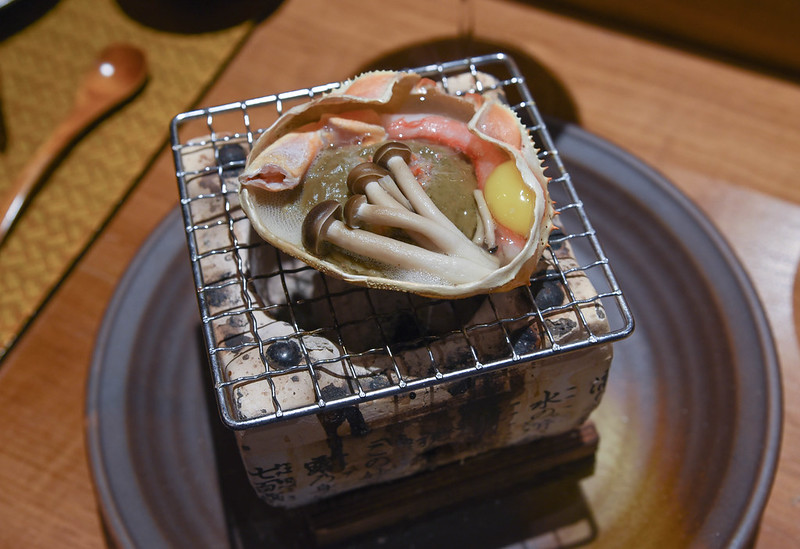 The snow crab with quail egg and sake kani miso rounded up the starters and what a fine conclusion it was to the first leg of the omakase. Pieces of crabmeat, quail egg and kani miso are placed on an upside down crab shell for grilling. The diner is then expected to mix them together, releasing a truly addicting crab paste flavor that you would want to slather wantonly in rice. It was just at this time that our donburi was served and while that already came with plenty of its own sauce, I couldn’t help but throw in a bit of the kani miso into the mix. 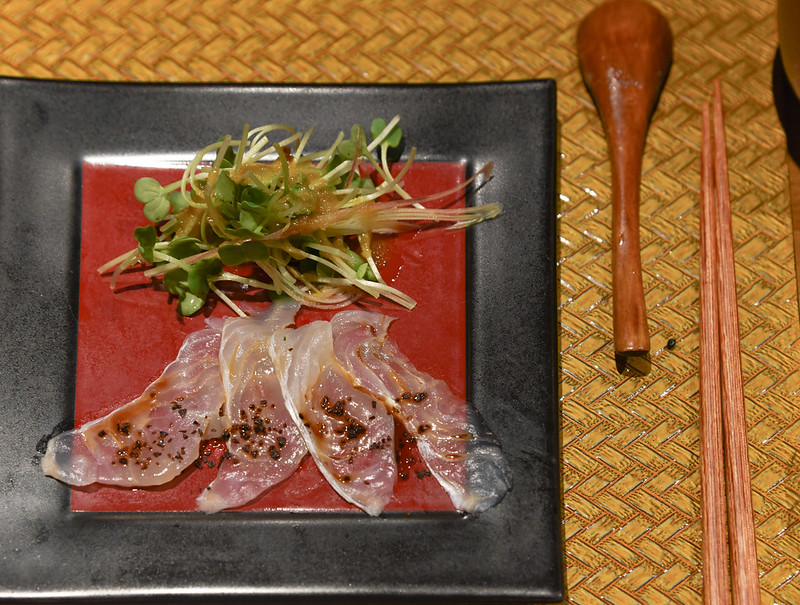 A duo of meticulously prepared sashimi followed. First was the raw flounder with Japanese ginger flower salad on the side. This was my first time to taste this predatory deep sea fish and I loved its subtle and smooth flavor. On the whole, it was not as light as a I thought despite the ultra thin slices. 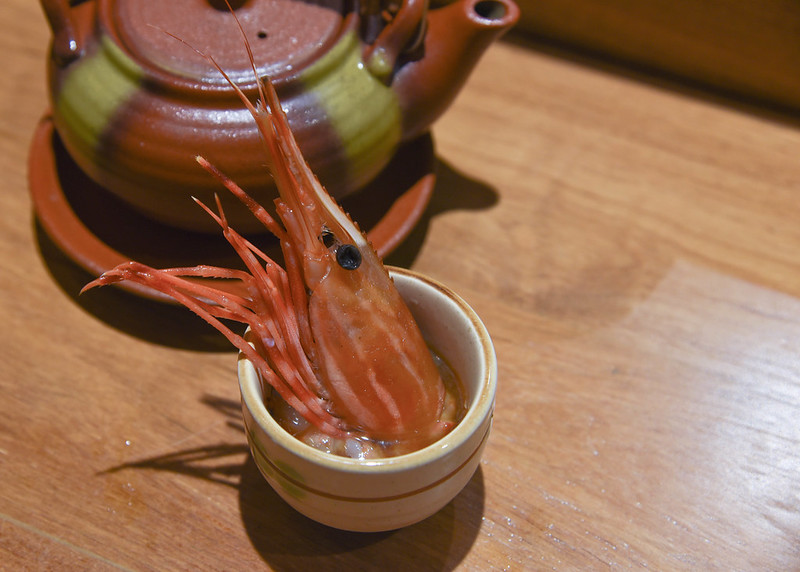 The botan ebi was unbelievably tender and sweet with the freshness being apparent upon first bite. It is presented while soaked in truffle ponzu and indeed, the delicate scent of truffle was perceptible as I lifted that piece of shrimp up. 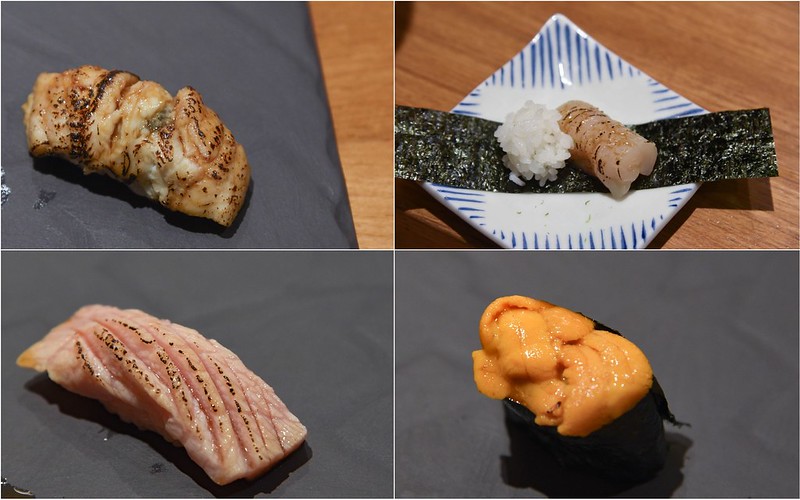 There are six types of nigiri sushi that come with the omomuki omakase. One thing you’ll notice as the chef prepares the plate to put the nigiri is that instead of the usual ginger, you get pickled chrysanthemum instead. The six types of sushi are sea urchin, bluefin tuna, foie gras, signature surf and turf, green onion shoots and conger eel. 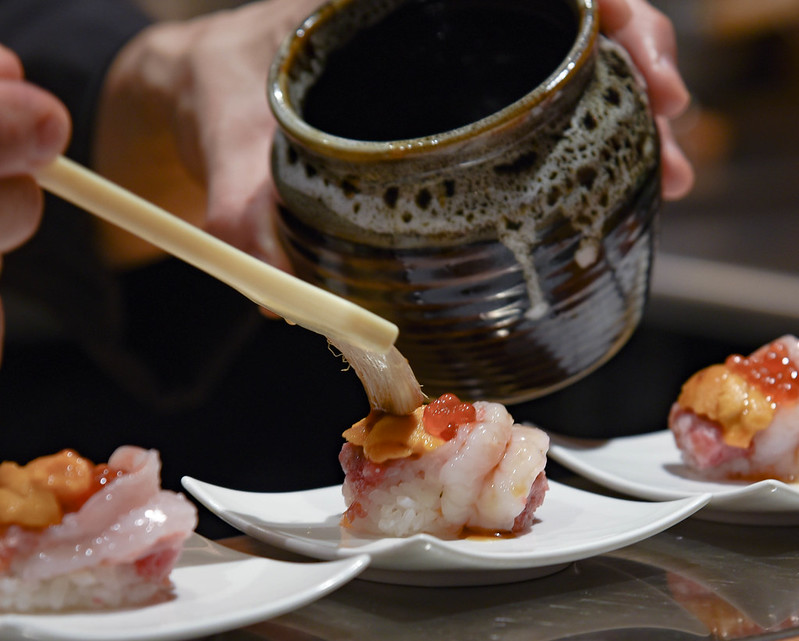 My favorite among the six was the surf and turf sushi which came packed with shrimp, wagyu, uni and salmon roe. That was absolutely heavenly. I also noticed many of the other sushi such as the bluefin tuna belly and conger eel came lightly seared. 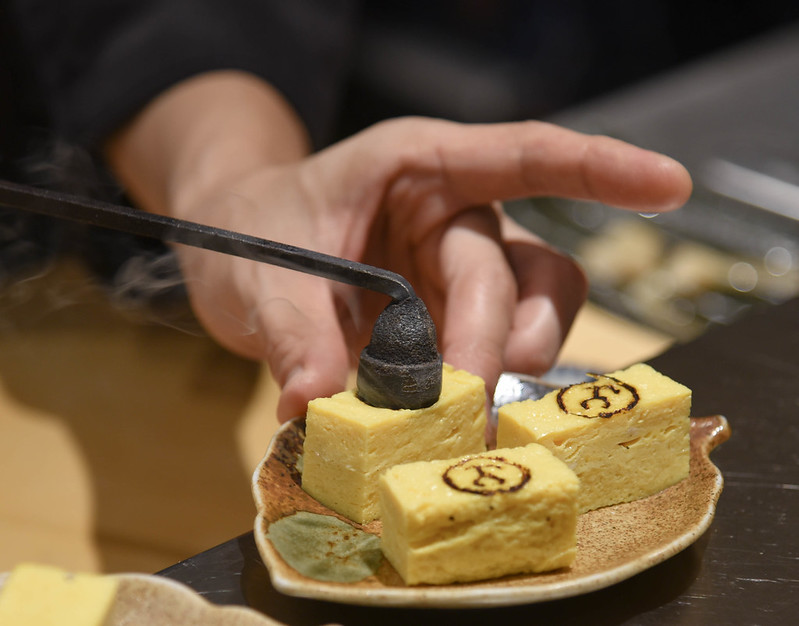 The last two dishes before dessert were the miso soup and the omelette or tamago. The latter came embedded with Fat Cow’s logo and came slightly sweet, as is the custom for Japanese rolled omelette. 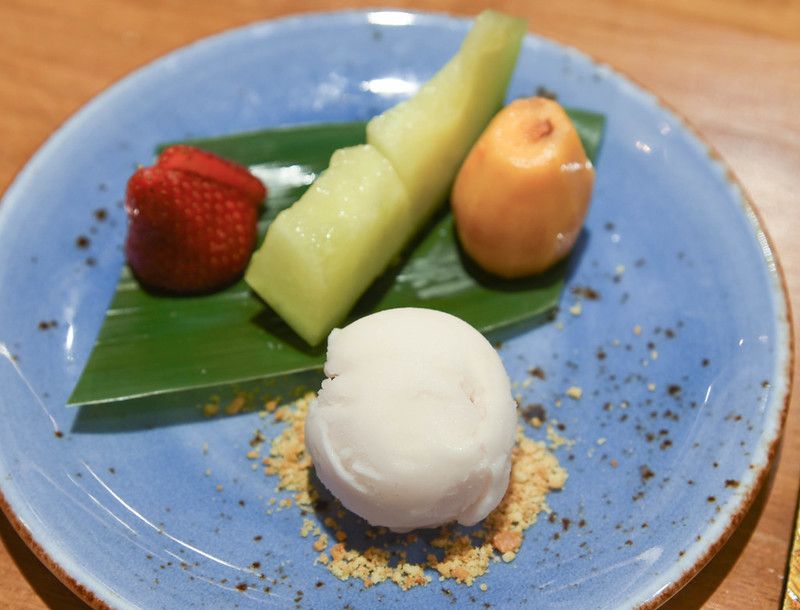 A number of seasonal Japanese fruits such as strawberries and honeydew are served for dessert along with a scoop of ice cream. I was made to pick between the likes of matcha, black sesame and white peach and I chose the latter as I’ve never tried it before.

Overall, I found Fat Cow to be a star in Singapore’s Japanese restaurant scene in both the ala carte offerings – the premium donburi was topnotch – and the varied omakase set. Prices may be on the higher side in the absolute sense but when compared to other Japanese restaurants of the same standing, Fat Cow is actually in line or in certain cases, even more affordable. The serving size for the ala carte dishes are above average as well. The venue also offers more wallet-friendly dishes during lunch or alternatively, diners can also get 50% off main courses with The Entertainer app. I personally do not subscribe to this app but I will definitely be back.

Friday to Saturday: 6PM to 11PM