The coming Chinese New Year in 2022 – the Year of the Tiger – will fall on the 1st of February 2022. Given the current situation, you can expect an abundant selection from some of the top Chinese restaurants and hotels for pen cai  for your reunion dinner. As with last year, there are several establishments offering takeaway or islandwide delivery services for Chinese New Year reunion dinners. If you choose to dine-in, do note that under current regulations, the maximum number of people in a table is 5.

Pen cai or Poon Choi is a traditional Cantonese dish comprised of a number of ingredients including meat, seafood and vegetables. Contrary to popular belief in Singapore, pen cai is not just consumed during Chinese New Year by Cantonese communities. Traditionally, pen cai is eaten during major festivals, religious rituals and even wedding banquets. In Singapore however, it is mostly eaten during the Lunar New Year as a symbol of harmony.

Without further ado, I’ve tried my best to list them down here for your convenience. This list will be expanded over the next few days as new establishments come onboard with their pen cai for CNY 2022 so bookmark this page for future reference.

Order here (10% off for I Wander readers, valid until stocks last) 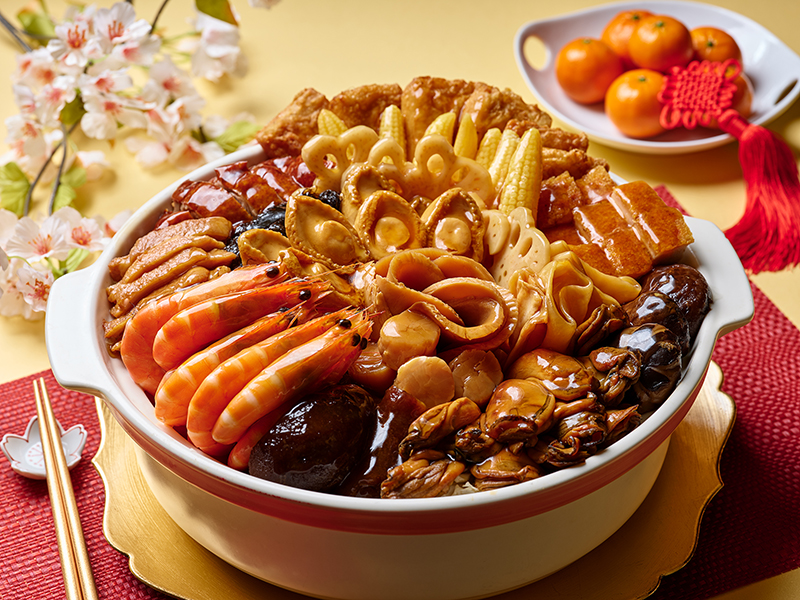 For an authentic pen cai, the restaurant’s Xin’s Traditional Pen Cai (S$328 / S$478) for takeaway brims with premium ingredients such as whole abalone, fresh scallop, deep-fried fish maw, sea cucumber, live prawn and roast meat to name a few. You can also lux it up and opt for the Xin’s Prosperity Pen Cai (S$368 / S$518) which has the same ingredients as the traditional pen cai but with added lobster and no duck. 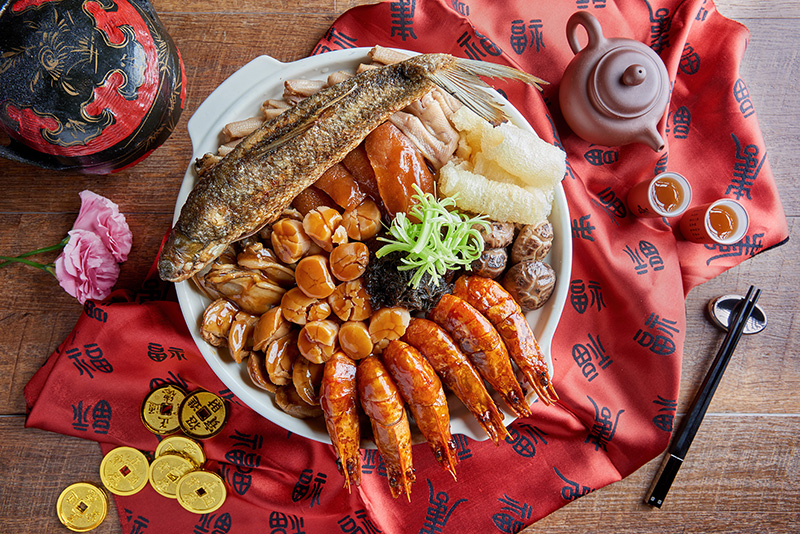 Guests may indulge in seasonal specials such as the takeaway Abundance Treasure Pot (S$488). Good for 8 persons, it hosts a treasure trove of prized ingredients including abalone, fish maw, whole dace fish, sea cucumber, pork knuckle and more, epitomizing its symbolism of abundance and prosperity. The dish is laboriously prepared over six hours to bring out the best flavors of each ingredient. 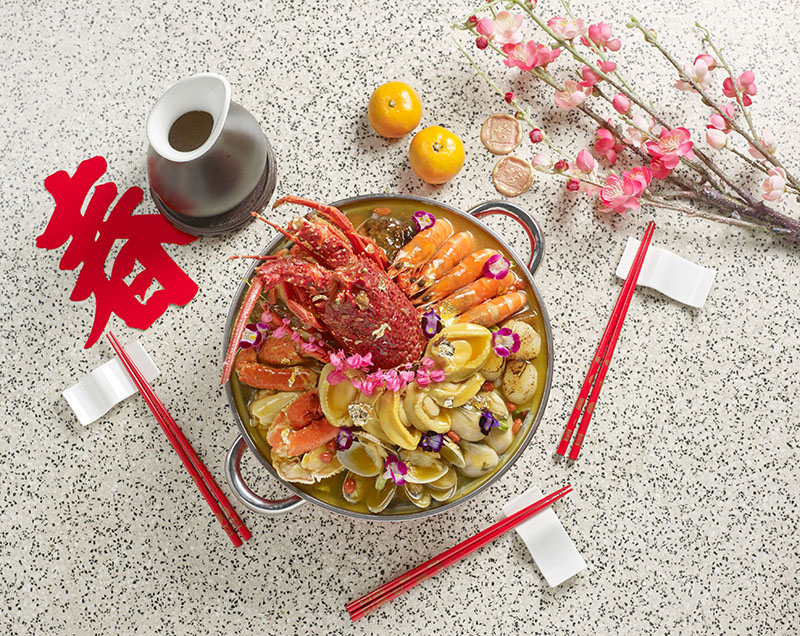 Tam Kah is a seafood wholesaler that also prepares cooked seafood dishes for delivery. For CNY 2022, they are offering either the Prosperity (from S$168) or the Superior (from S$198) pen cai. Both types of pen cai come in 5-pax and 10-pax versions. Expect ingredients such as 6-head abalone, sea cucumber, fish maw, dried and fresh scallops and more. This is quite a good value pen cai if you are looking for a less expensive option this year.

Making its debut this year at JW Marriott Singapore South Beach’s Madame Fan is the Trio of Happiness Poon Choy (from S$368), available exclusively for takeaway and delivery. There is a progressive spin to this communal-style festive casserole hot pot with three distinctive flavors – Classic Abalone Sauce for the traditionalist, Spicy Szechuan Sauce for the adventurous and an East meet West Truffle Sauce for the modern maestro. This pen cai includes ingredients such as abalone, spiky sea cucumber, tiger prawns, Hokkaido scallop, fish maw; meaty delights such as roasted duck and poached chicken. 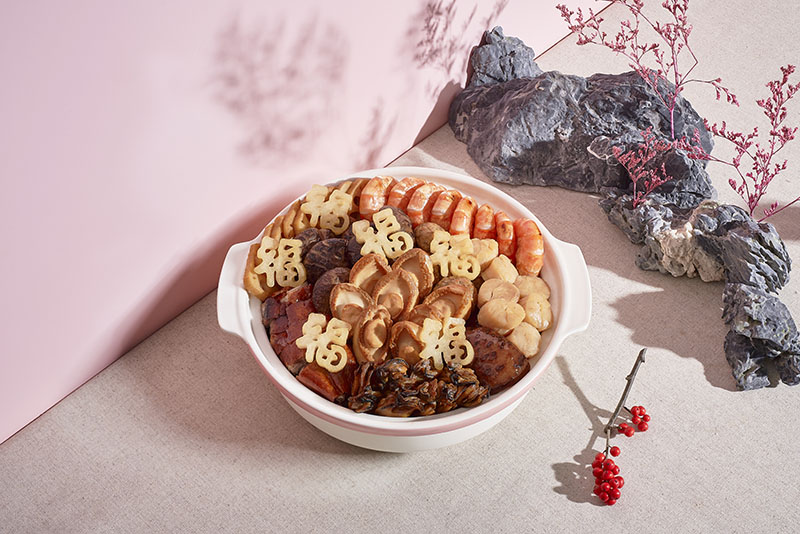 Peach Blossoms’ Blossoming Abalone Treasure Pot (S$388) includes 10-head abalone, roast duck, braised pork trotter and a selection of premium seafood in a one-pot braise. Good for 8 persons, a vegetarian version is also available from S$308. Orders need to be made at least 3 days in advance.

For takeaway, the Great Treasures Pen Cai (S$588) contains the same ingredients as the individually-portioned Premium Braised Pen Cai except that this takeaway version is good for 6 persons in one pot. 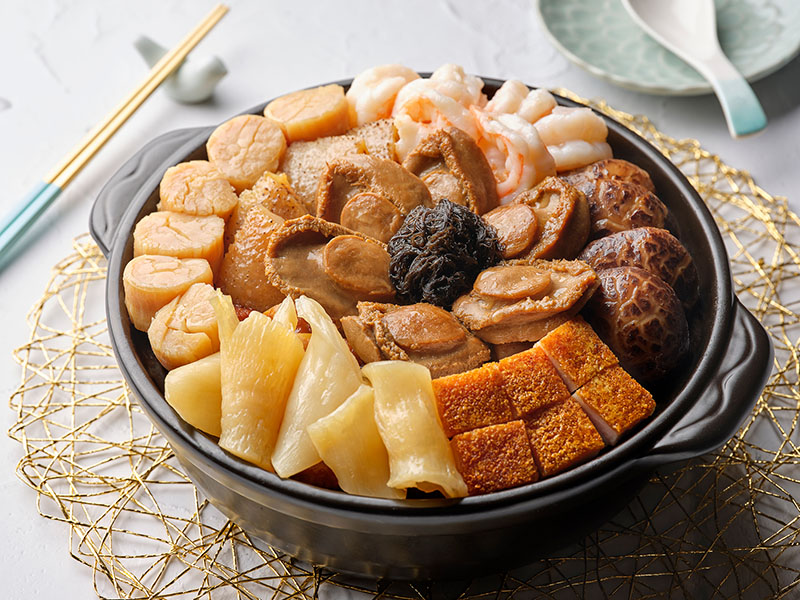 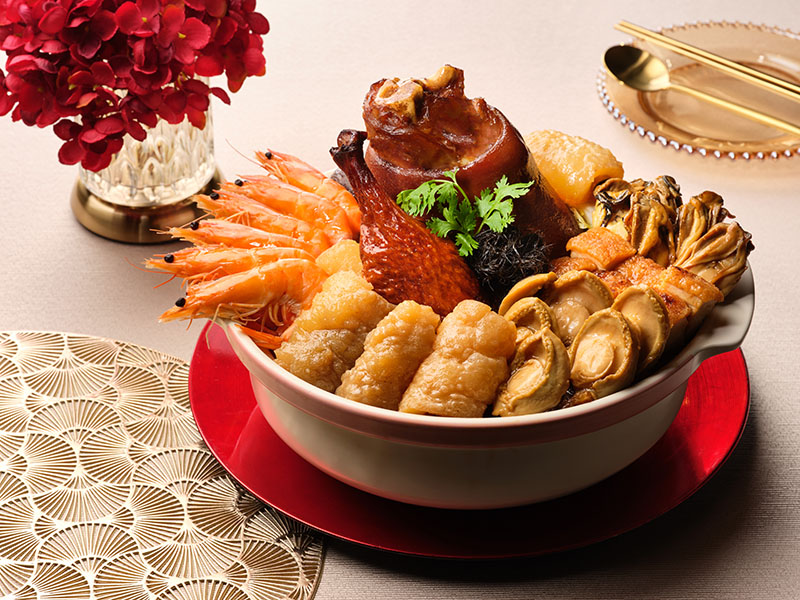 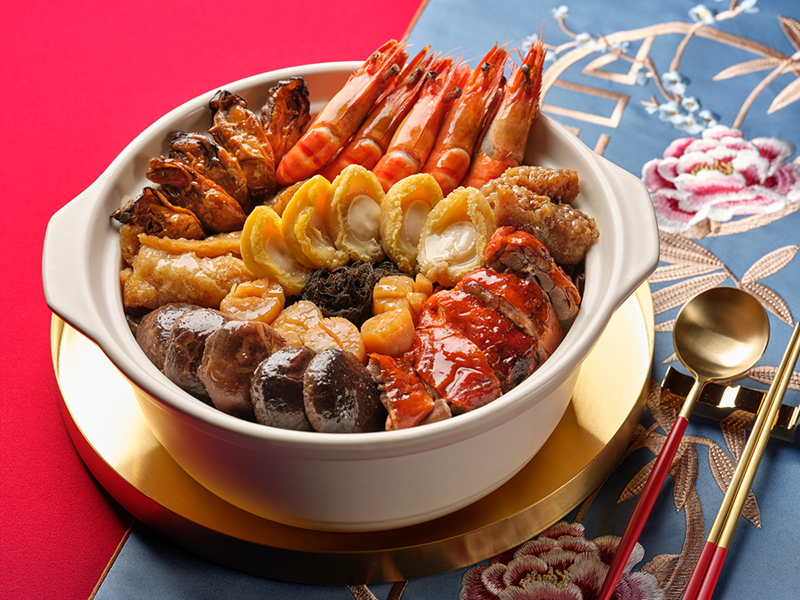 treasures in a pot pen cai from capitol kempinski (source: the hotel) 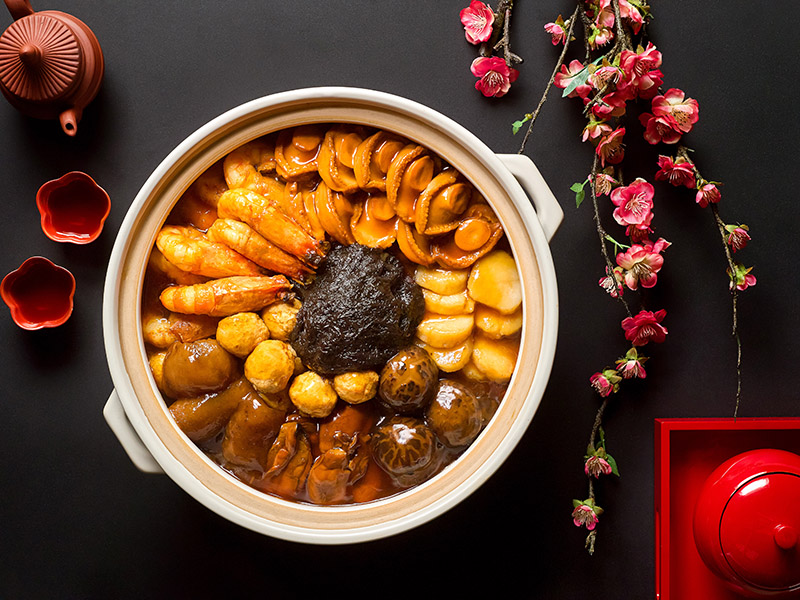 Making a return this year is Wah Lok’s Longevity Poon Choi (from S$408). This is an elaborate three-layer dish consisting of premium ingredients such as whole abalone, sea cucumber, scallops and dried oysters with superior stock in a casserole pot. Wah Lok’s pen cai has remained relatively unchanged over the years as it attracts a steady stream of regulars each CNY.