Traveling in and around Banda Aceh, in Sumatra’s northern tip, is an eye-opening experience. The place is a manifestation of the indomitable resilience of the human spirit, with the city having been ravaged by the tsunami that swept the Indian Ocean in 2004. This corner of Indonesia is not frequently visited despite its attractive coastal location. This has been the case even prior to the tsunami. Those who make the effort to come here are often rewarded by turquoise colored waters, some seriously grand buildings and monuments as well as some of the more unique tourist attractions that one can find in a city. Banda Aceh is definitely worth a short weekend trip and in this guide, I’ve put up my suggestions for a one day or two day itinerary that you can easily follow. My decision to visit Banda Aceh wasn’t a spontaneous one. I have been curious about this far corner of Indonesia for a long time now and finally booked a trip when an opportunity came up. 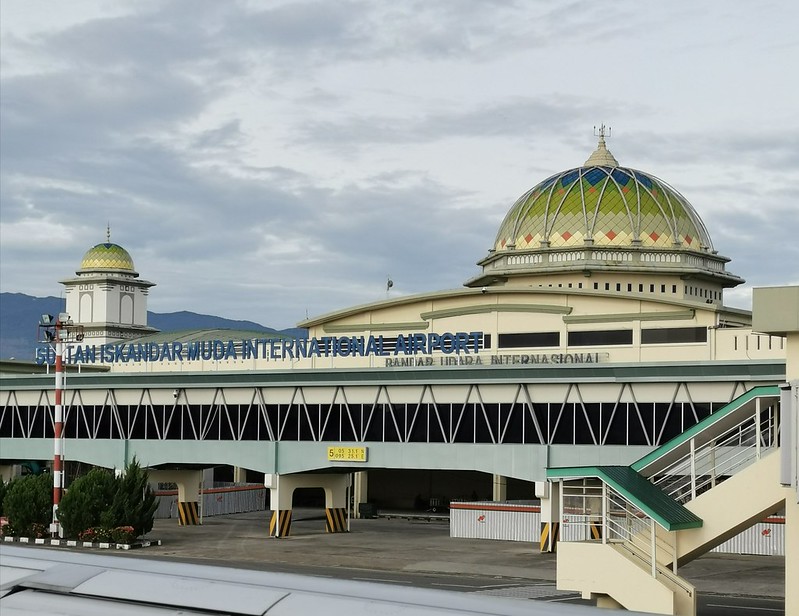 The main airport in Banda Aceh is the Sultan Iskandar Muda International Airport and is located around 20 to 25 minutes from the center of town. Do note that cars booked through Grab can’t pick up passengers from the airport directly. If you are carrying a lot of luggage with you, you may wish to hop on one of the taxis which cost a bit more and require some haggling. If you are carrying only backpacks, it is still doable to book a car through Grab but you need to walk out to the main road (around 5 minutes walk) which is where Grab drivers can wait for passengers.

Once you reach the center of town, you will likely notice that Banda Aceh seems cleaner and more organized than other cities in Indonesia. This may be partly due to the tsunami disaster that occurred in December 2004. That left much of the city devastated and large chunks of Banda Aceh had to be rebuilt. 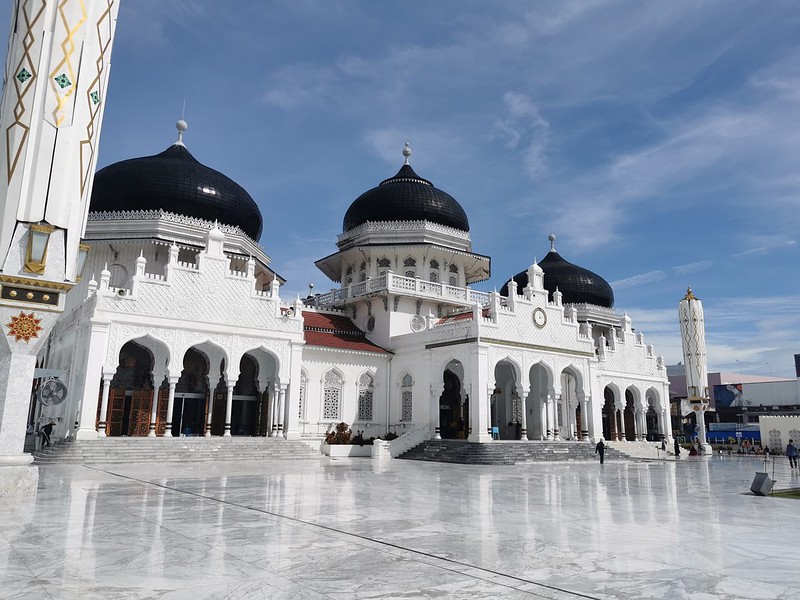 After settling in the hotel, start your exploration of Banda Aceh over at the imposing Baiturrahman Grand Mosque. Especially attractive when seen in the morning with the sunlight shining over the whitewashed Moorish facade of the mosque, the building originates from the mid-1800s. Aceh is generally recognized as the first area where Islam spread in the Indonesian archipelago. The mosque had been expanded in the intervening years. Only the middle part of the building comes from the original construct, with the left, right and back portions added later on. One of the highlights of this mosque is its marbled floor which extends outside throughout its gated perimeter. This is one of the tidiest mosques that one can visit in Southeast Asia. To enter, one has to leave his shoes outside by the main gate. It’s different from other mosques where one only needs to remove shoes when entering the main building itself. Do note that non-muslims are not able to enter the building but are free to roam around the marble-floored compound. 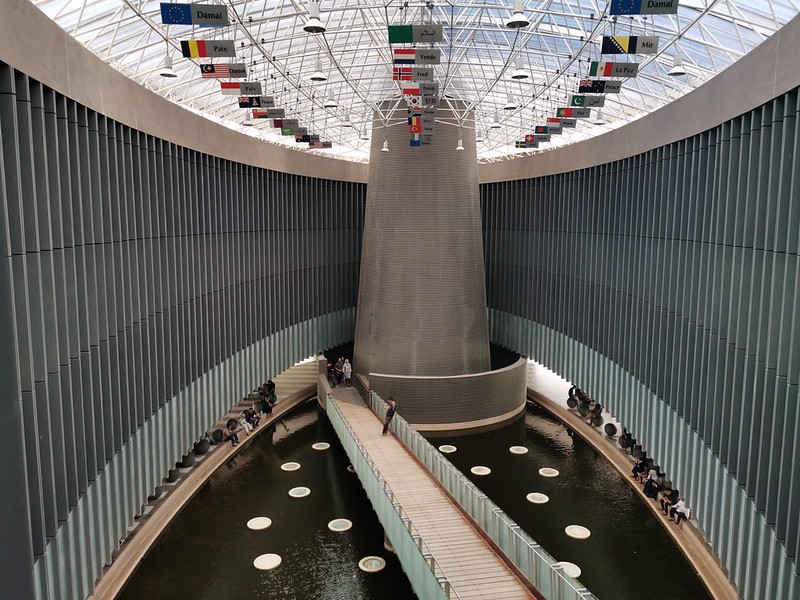 From the mosque, many of Banda Aceh’s attractions are within reach. Found directly south by walking through a leafy boulevard is the Tsunami Museum (open daily 9AM to 4PM). This is one of Banda Aceh’s unique attractions, given the city’s recent history with the deadly disaster that paralyzed it in 2004. More than 150,000 people were said to have perished and the anguish of such a tragedy could be perceived as one goes thru the museum’s dramatic entrance. It’s made up of a dark tunnel with water dripping from the ceiling, with audible cries for help coming from the sound system. Although the museum commemorates a sad chapter in the city’s history, parts of the museum look visually appealing – especially its modern and instagrammable atrium.

Just a short walk from the museum is a park called the Lapangan Blangpadang. This squarish piece of green in the middle of the city is a popular space for jogging but one can also find the Seulawah 001 Aircraft Monument. The Acehnese played a considerable part in Indonesia’ quest for independence from the Dutch by raising money to purchase an airplane for the cause. This is now immortalized through a monument with a replica of the plane that was contributed. Also within the park grounds is the Thanks to the World Monument. It’s a small corner with sculpture of waves meant to symbolize the tsunami in 2004. The monument was erected as a gesture of appreciation to the countries that helped in the relief effort following the disaster. The list of countries can also be found in the Tsunami Museum. 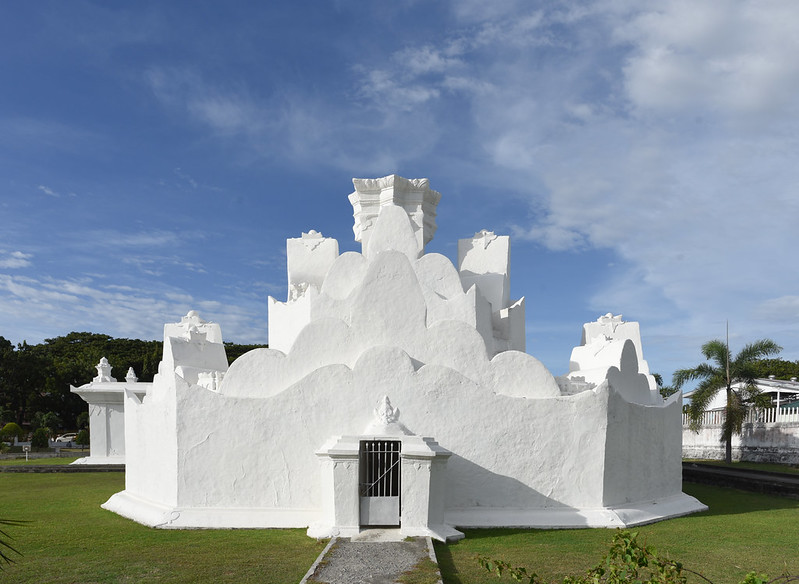 Walk to the east along the Jalan Sultan Iskandar Muda and walk south along Jalan Teuku Umar. Here, you will find the enigmatic Gunongan (open daily 8AM to 6PM). There is some debate about the origins of the whimsical whitewashed structure, with some evidence about it being constructed as a playground during the rule of Sultan Iskandar Thani. However, there are those who also believe that Gunongan’s origins are older than that. 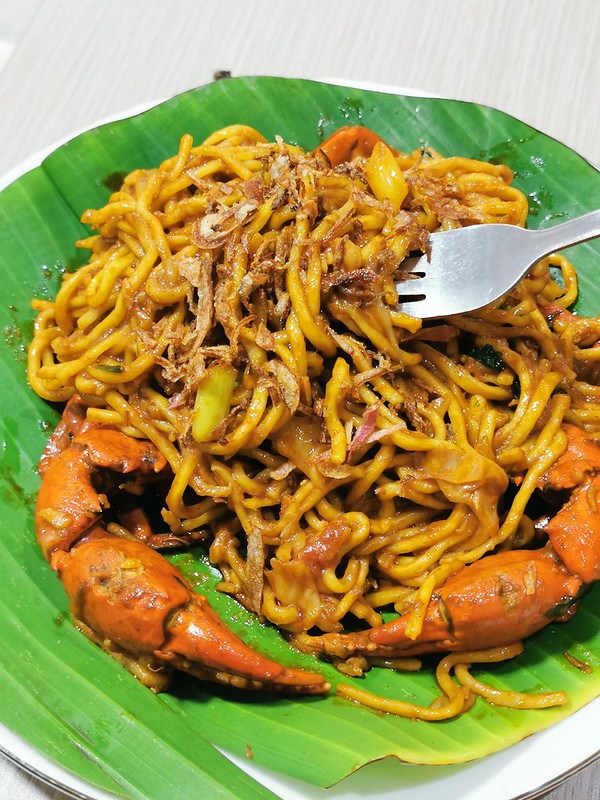 For lunch, a spot of the city’s famous noodles called mie aceh is heartily recommended. In contrast to the mie goreng usually found all over Indonesia, mie aceh is spicy and can be topped with a wide variety of premium ingredients. Over at Mie Razali (open daily 11AM to 11PM, Fridays from 2AM to 11PM), one can choose to have his noodles topped with crab. One order of noodles with crab generously came with three crab legs. For just about US$4, it’s definitely a steal. 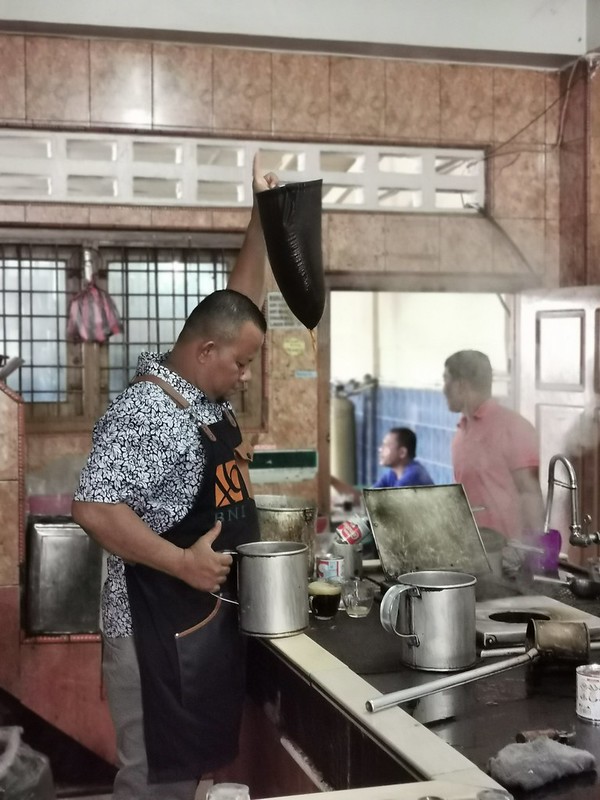 After lunch, it’s time to wait out the searing midday / early afternoon heat with some of Banda Aceh’s famous coffee. Coffee shops are everywhere in Banda Aceh and to be honest, I have not found such a large concentration of cafes anywhere else in Asia except perhaps in Ipoh, Malaysia. One of the most popular coffee joints in town is Solong Coffee (open daily 6AM to 11PM). The brand has quite a number of outlets now but the original one located in Ulee Kareng is still the one to visit. While here, try the smooth and aromatic Kopi Sangger (filtered coffee with condensed milk). For those who can’t take dairy, this very local-looking coffee shop also has its own coffee machine that can dish out espresso. They also sell their own beans. I chanced upon the owner during one of my visits there and he proudly showed me their coffee grinder at the back. Other than coffee, they also make pretty good teh tarik (pulled tea). If you prefer something airconditioned and trendy, you can also check out Tanabata Coffee (open daily 10AM to 1AM except Fridays from 2PM to 1AM and Sunday 10AM to 7PM) which is only a few doors down at the opposite side of the street. 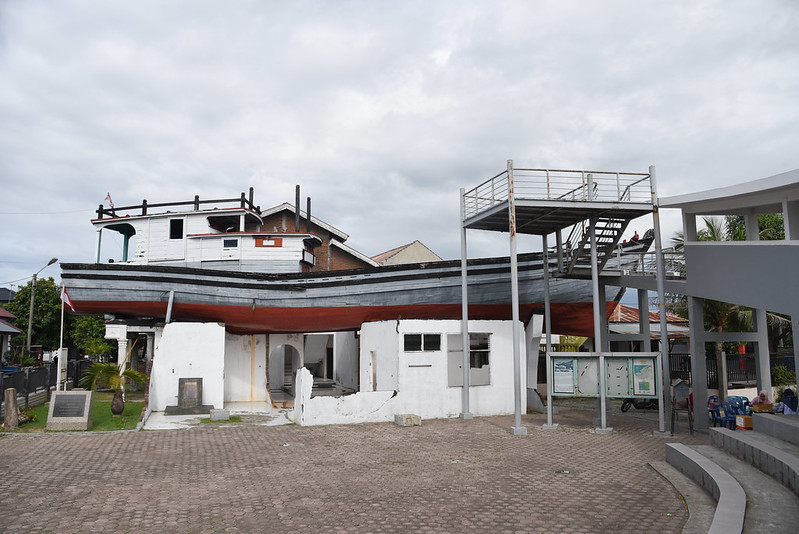 Many of Banda Aceh’s tourist attractions are centered around the 2004 tsunami. One glaring example is the aptly named “boat on the roof.” Survivors from the tsunami held on to their lives by staying on the boat as the city was flooded. The boat eventually settled on the roof of two houses in Lampulo. Authorities decided not to clear it in order to remember the disaster. Today, it is a tourist attraction. Entrance is free and an inclined path allows one to go up to to see the boat from a higher point of view. 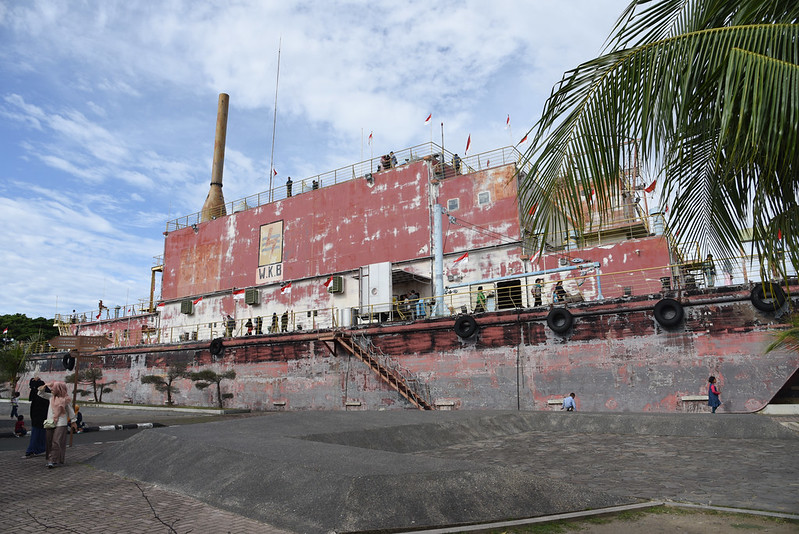 Another boat that you have to see just to imagine the strength of the waves back in 2004 is the PLTD Apung, a large metallic ship that washed all the way several kilometers inland. The ship is now a tourist attraction and museum. Visitors can enter and see various dioramas and videos that depict the “route” it took when the tsunami hit Banda Aceh. You can also climb to the topmost area of the ship for a nice view of the city. There are few, if any, tall buildings in the city so spots that afford bird’s eye views are relatively rare. 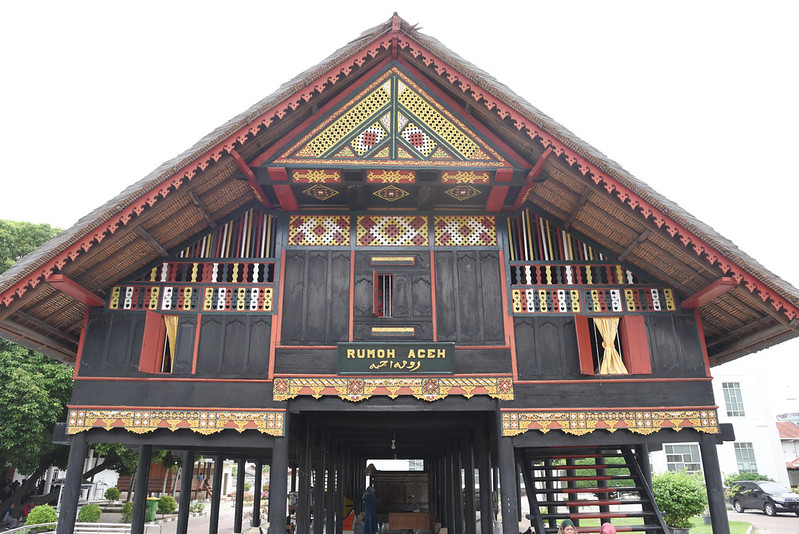 Another museum worth checking out if you have time is the Museum Aceh (daily except Monday, 8:30AM to 12noon; 2PM to 4:15PM). One of the highlights here is a replica of a traditional Acehnese house called Rumoh Aceh, a wooden building with elaborate woodcarvings and patterns in the facade. Inside, one can also find scale models of the Baturrahman Grand Mosque tracing its origins from a small village mosque to its many expansions over the years.

There is no shortage of beaches around Banda Aceh with Pulau Weh, located just an hour’s ferry ride away, generally considered one of the best beach destinations in the country. The island is filled with beaches and unbelievably blue waters. Although it is relatively known for such, it hasn’t witnessed the mass tourism that other similar islands in Southeast Asia have undergone. Many lodging options here are fairly basic but at the same time, you’ll find unspoiled corners and spectacular diving and snorkeling.

How to get from Banda Aceh to Pulau Weh (Sabang) 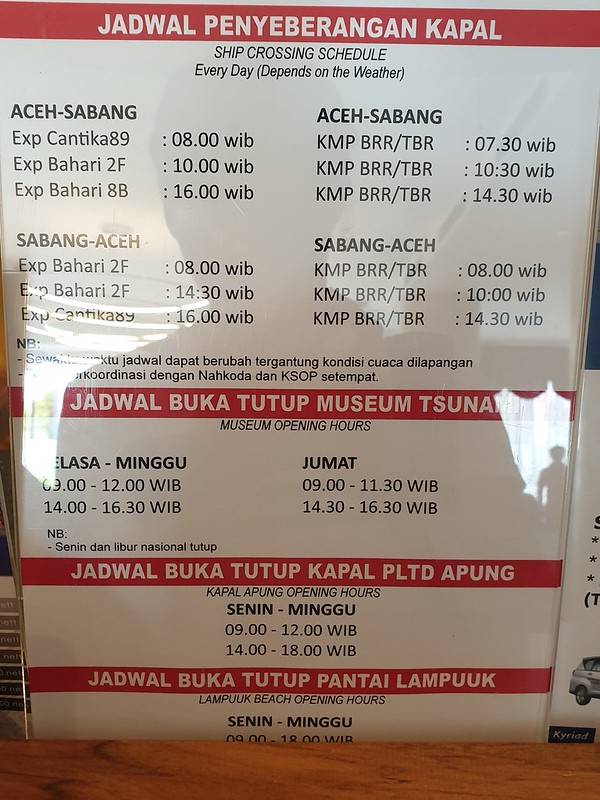 The name Pulau Weh is usually used interchangeably with the island’s largest town, Sabang. To get here, there are ferries making the trip from Banda Aceh. You can check out the above ferry schedule for the trip between Banda Aceh and Sabang, Pulau Weh. The ferries don’t actually land in Sabang itself but in Balohan port from where it is around 15 to 20 minutes by car to the town center of Sabang. Most travelers head straight to Gapang or Iboih for the best beaches, which are around 50 minutes by car from the ferry pier.

Looking at the ferry schedule, it is entirely possible to make a day trip out of Sabang. You can simply take the earliest ferry, followed by a car ride to the beaches. The entire journey will take about 2 hours to get to the beaches. On your way back in the afternoon, you will find yourself on the road/at sea for another 2 hours which can be a bit draining. Doing Sabang as a day trip from Banda Aceh will leave you roughly just 3 to 4 hours of non-traveling time in the beach / leisure areas. That may be enough if all you are after is a walk by the beach or a spot of sunbathing followed by lunch. But this is probably not enough time if you also plan to snorkel or dive.

Where to Stay in Banda Aceh

Banda Aceh is not exactly in the main tourist trail so the city is almost entirely devoid of international chain hotels. The only semblance of an international hotel is the Kyriad Muraya Aceh which is located right in the heart of town. Rooms are spacious and thoroughly modern. This is the best hotel in Banda Aceh. Many of the city’s famous eateries, such as Mie Razali, are just within a few minutes’ walk from the hotel.