I won’t beat around the bush — Chiang Mai has got to be one of the best cities to live in Southeast Asia. In a region where cities are known for chaos, endless traffic jams, overpopulation and crushing poverty, Chiang Mai offers a nice change with its affordable laid-back lifestyle, cultural inclinations as well as variety of things to see and do, all within an infrastructure framework that is developed and most importantly, convenient for city living. I went to the city for a short visit and was definitely impressed with what it had to offer. My only regret was why I had not visited earlier. 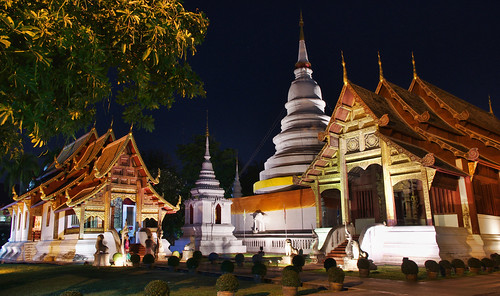 Chiang Mai is Thailand’s second largest metropolis but the contrast from Bangkok could not be any greater. At first glance, it has all the trappings of a large modern city – shopping malls, an international airport, high-rises and luxury hotels dot the urban landscape. But what really sealed the deal for me is the city’s laid back attitude. Even the tuk-tuk drivers here never once attempted to overcharge me. There’s a certain calmness that doesn’t take long to infect city-folk like myself, and in no time I was swaying to the unhurried rhythms of this northern town. 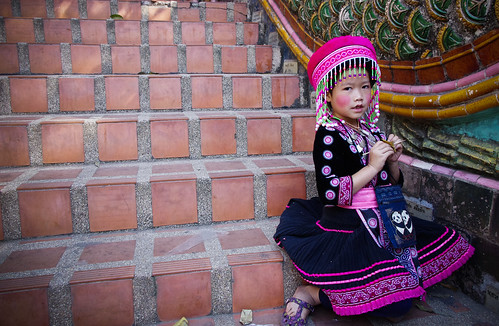 When it comes to Chiang Mai, the bulk of travelers succumb themselves within the walls of the old city. And rightly so. While undeniably popular with tourists, it is a pleasantly calm town, unlike what one would expect from a place considered to be one of the country’s tourist centers. The locals are also incredibly friendly.

A City of Temples

Those wishing to see a bit of Northern Thai architecture won’t be disappointed in Chiang Mai. The city is home to hundreds of temples. Some of these are hundreds of years old and have rich historical backgrounds, others are newer but are popular among worshippers but most of them are wonderfully built in a trademark style that can be found only in Northern Thailand and Laos. 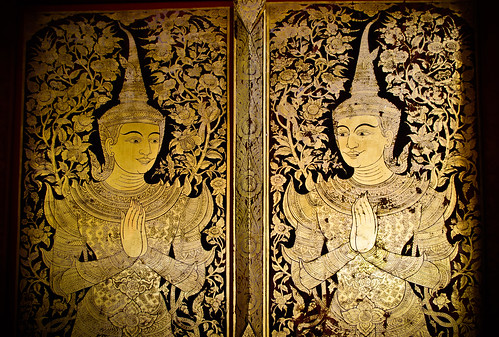 one of the doors at wat phra singh 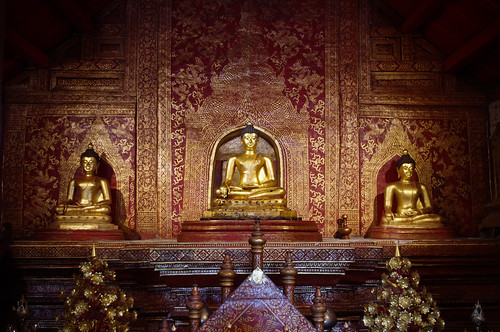 During my visit, I was able to see quite a few. Many of the well-known temples are located within the walled city. The most famous one is Wat Phra Singh. It is one of the oldest temples in the city and also one of the most popular. Especially during weekends, people from all over the country would come here to visit an important Buddha statue housed in one of the inner buildings (called “wihan”). I went during the weekend and found the pathway leading to the inner buildings filled with vendors selling all sorts of knick-knacks and interesting Thai street food. 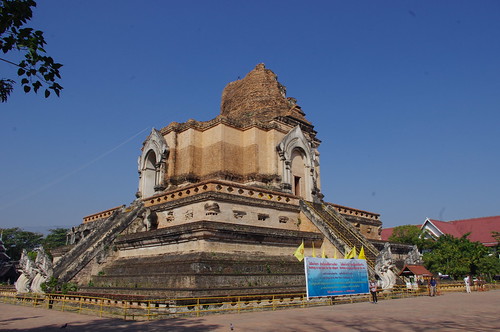 the archaic wat chedi luang with its ruined spire 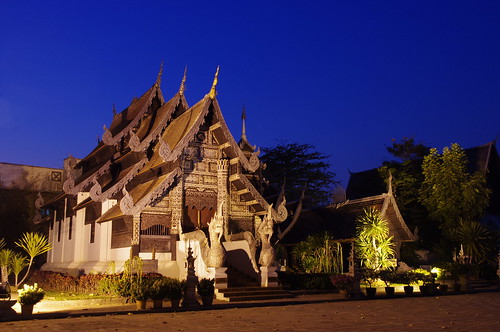 Around 6-minutes walk from the Wat Phra Singh, near the very heart of the walled city is another impressive temple called Wat Chedi Luang. Although it is not necessarily older, its ruined brick spires accentuate its age. Like a piece of Bagan or Angkor in Chiang Mai given its ancient ruined look, this temple frequently makes it to postcards on Chiang Mai. 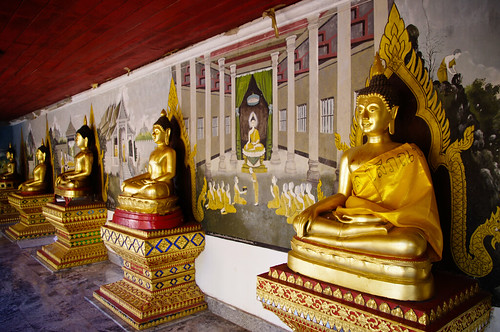 Outside the old city, there are a couple of unmissable temples as well. This includes the famed Wat Prathat Doi Suthep, which can be reached via songthaew (shared van) and is located within Doi Suthep-Pui National Park. To get a van, I had to wait several minutes in front of the Chiang Mai Zoo as the driver waited for more passengers. I ended up boarding the van with a Brazilian, Canadian, Chinese and some Thais. 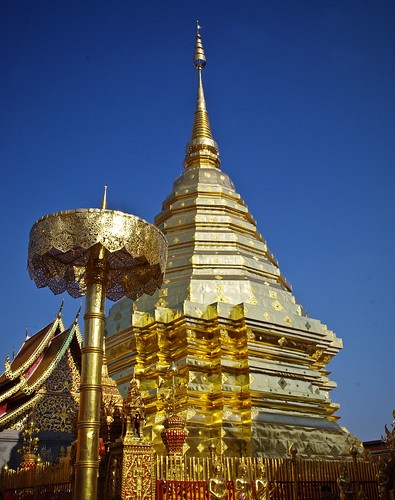 Like Wat Phra Singh, this temple is extremely popular with both locals and tourists. I visited on a Sunday and it was jampacked with people. To get to the actual temple, I had to climb about 300 steps from the carpark where the songthaew dropped us off. From the top, the view over Chiang Mai was nice if not a bit hazy. It wasn’t the easiest place to get to but nevertheless, Wat Prathat Doi Suthep’s giant golden chedi did not fail to impress as it glittered against the afternoon sun. Those who have been to other Buddhist sites in the region such as the Shwe Dagon Pagoda in Burma or as a more remote comparison, the Pha That Luang, may note the similarities. But each has its own peculiarities. The chedi of the temple in Chiang Mai for instance, is less conical in shape. 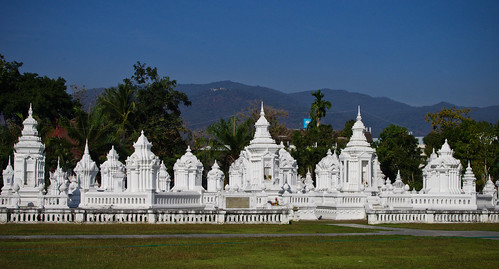 As the temple fatigue started to kick in, I made a short stop at Wat Suan Dok. Compared to the other temples in the city, it has its trademark whitewashed mausoleums as well as mountains in the background. But other than that, the main temple building was pretty much standard. But do look out for the bell-shaped chedi behind!

A City of Markets 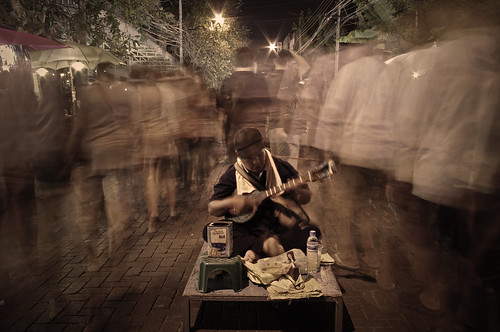 how to be alone in a crowded place

The city is also a shopper’s paradise. Even for those not exactly planning to buy anything, it’s certainly worth one’s time to check out the Saturday and Sunday markets. I have been to night markets all over Southeast Asia and I can seriously say that the one in Chiang Mai is one of the best. To say that there’s a wide array of goods on sale would be an understatement. The markets also seem to be hotbed for budding retail entrepeneurs. Among the notable items I saw on sale were t-shirts with blinking lights, a self-branded 100% fresh juice assortment, handcrafted sandals and so much more. One can easily spend hours getting lost in the maze that is Chiang Mai’s Saturday or Sunday market.

A City of Adventure

Given my relatively short-stay in Chiang Mai, there was an abundance of things I wasn’t able to do. From trekking Doi Inthanon National Park to elephant rides or even rafting, one can easily spend a week around the city without getting bored. Fortunately for me, it equates to a reason (or multiple reasons!) to go back!

Tip: Chiang Mai is well-known for massages (of all types!) that can be done on the cheap. For those wondering where to have this done, I would recommend the Thai Massage Conservation Club. Services are done by blind masseuses who tend to have a heightened sense of touch than their counterparts elsewhere (starts at 180 baht for an hour).