The two countries actually share a border that spans almost three thousand kilometers but the Wagah border is the only point that is open for foreigners to cross. According to Foreign Policy (FP) magazine, the India-Pakistan border is one of the most dangerous in the world. My experience was actually quite pleasant and it’s one of the easiest international land crossings I have done so far. 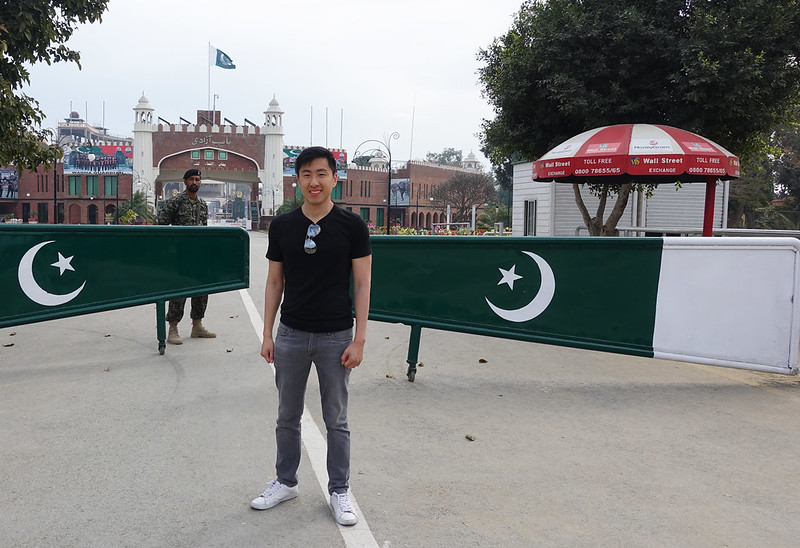 From Amritsar, it is relatively easy to get to the Wagah Border. While you may raise a few eyebrows by asking to be taken there for any other purpose than to watch the border closing ceremony, you can easily hail a cab to take you there for around INR 1,000.

From the Indian side, the border is open at 10AM. I arrived there at around 9:30AM and was asked to wait for a bit at a shed before being motioned to enter the building housing customs/immigration.

A quick glance at a logbook being maintained by the Indian army showed that only a handful of foreigners (those who are not from the subcontinent) cross the border each day (i.e. 10 or less). At the immigrations desk, the officer asked me what I was going to do in Pakistan. “Holiday,” I muttered and he let me through after commenting that I was the first traveler from Southeast Asia he had seen crossing the border.

From hereon, it was a simple bus ride to the parade grounds itself, which is about 100 meters to the actual gate. A no man’s land spanning no more than 10 to 20 meters separate India and Pakistan. After one final check, I finally managed to cross the no man’s land and found myself in Pakistan.

Upon entering Pakistan, the first thing you’ll see is their side of the parade grounds which is empty while the border is open. There were some soldiers stationed who looked at my passport before directing me to the immigration building at the Pakistani side.

Inside the immigration counter, I was again asked what my business was in Pakistan. The procedure was relatively painless but travelers are supposed to fill out an arrival card which they give out at the counter. I noticed more stringent checks for Indian travelers at customs.

After exiting the immigration building, it is around 1 kilometer to the parking lot/waiting area where any pre-arranged transport or taxis will be waiting. You can either walk it or wait for a trolley to take you there. By this time, it was around noon so I decided to wait for the trolley to come. 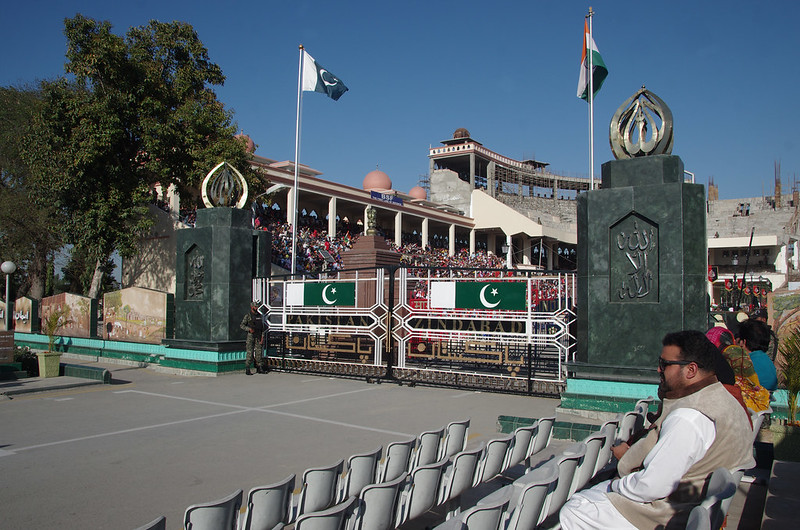 In case you are wondering if it is possible to cross the Wagah border and watch the border closing ceremony the same day, I would like to clarify that yes, it is indeed possible. I did exactly this. I crossed the border in the morning, arrived in Lahore past noon to grab lunch, visited a sight or two and then left my bags in the hotel. Just note though that you can’t bring your bags to the ceremony area so you’ll really need to drop them somewhere in Lahore.

How long does it take to cross the Wagah border?

Armed with the proper visas for India and Pakistan, it is a relatively quick crossing to make. It is advisable to cross once the border opens as there is not much of a crowd. It took me around 1.5 hours to get from the entrance of the border in the Indian side up to the exit of the border at the Pakistani side. There wasn’t much of a queue but most of the time is spent in waiting – i.e. for the trolley in Pakistan and the shuttle bus at the Indian side. But other than that, the actual immigration formality was quite quick. 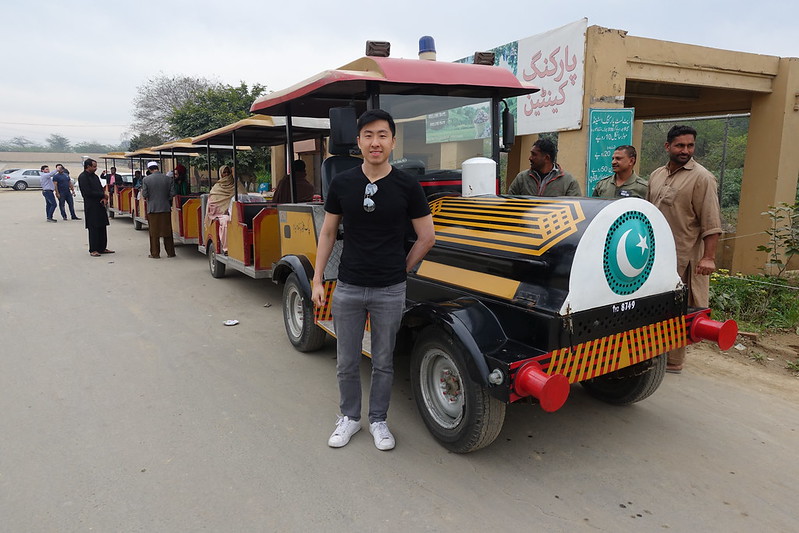 people mover at the pakistan side of the wagah border

After my trip to Lahore, I again made my way to the Wagah border – this time entering it from the Pakistani side. From the Pakistani side, the border opens at 9AM during winter and 8:30AM during summer. There are some nuances in the method of entry. First of all, there were noticeably more security checks. Even before entering the border itself, you’re subjected to this body scanning machine by the highway. After this, the closest your car will take you is to the parking lot / greeting area where you can either walk or take a trolley to travel the 1 kilometer to the Pakistan immigration building.

I arrived in India before noon and headed straight to the airport for my flight that same afternoon back to Singapore.

Other Things to Consider When Crossing the Border

In doing a trip like this, or even to visit either Pakistan or India regardless whether you’re making border crossings, I strongly recommend getting travel insurance. This will cover incidents ranging from hospitalization or doctor visits due to eating something bad to missing luggages and certain accidents. For this trip, I got my travel insurance from World Nomads which is used by many long-term travelers. The good thing about them is that they have a higher medical coverage and their insurance is valid for both Pakistan and India.

Crossing the border between India and Pakistan is relatively easy as long as you have the requisite visas. Compared to other border crossings I’ve been to (i.e. Singapore-Malaysia and Laos-Thailand), there are very few people who actually cross the Wagah border which makes it a lot easier to cross. The bulk of your time could be spent in waiting. Some of the “services” – such as the people mover, shuttle bus and even the bag scanning folks would wait for a number of travelers to gather before they operate so it would be wise to add in a bit of allowance to your schedule.

Where I stayed in Lahore: My priority while in Pakistan was safety so in Lahore, I decided to forgo large hotels and opted for small and unassuming boutique hotels instead. That’s how I ended up choosing Luxus Grand Hotel – a surprisingly modern lodging in a conservative Islamic republic. Think: see-thru bathroom glass panels (that can be covered with the blinds) as well as relatively plush bedrooms. I was even given 2 tickets to the adjacent movie theater as a welcome gift. You can compare the best prices for this hotel HERE