Despite coming from a country (or maybe because of it) with heavy Hispanic influence, Spain really fascinated me. This interest – no, obsession – stemmed from what I thought Spain was. Bullfighting. Flamenco. Tapas. Siesta. Fiestas. There are many countries where stereotypes are just that; stereotypes. Spain however, seemed like a stereotype come alive. But of course, one gets to dig deeper and finds that there are other facets to the things we think we know about this complex European nation. 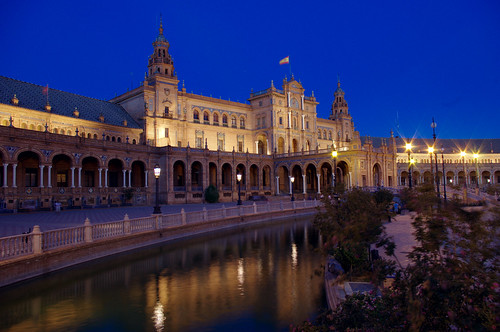 Going back to the stereotypes, perhaps there is no better place in Spain to witness these than in Andalucia, or to be even more specific, in the city of Seville. It was thus just right that we started our trip down the south of Spain in Seville, one of Spain’s most important cities and one which is jampacked with things to see and do. We arrived very early in the morning after a 7 hour bus ride from Lisbon the night before. 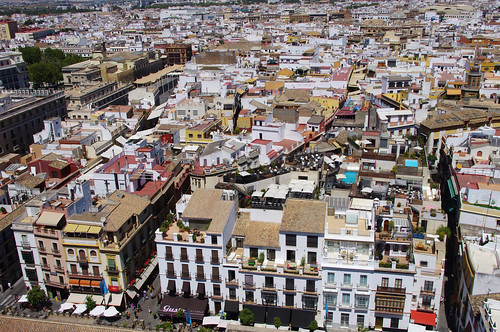 While making our way to our hostel, I could not help but notice the difference in the city’s architecture with those in Madrid or even Salamanca, where we were previously. The architecture reminded me of Manila’s Intramuros district, and helped me obtain a context of where the Spanish influence in my city came from. Compared to Salamanca, Seville presented the side of Spain that jived with my imagination, one with lots of flamenco (Seville is known as a hub for the dance), bullfighting and siesta (shops close from 3 to 5pm). 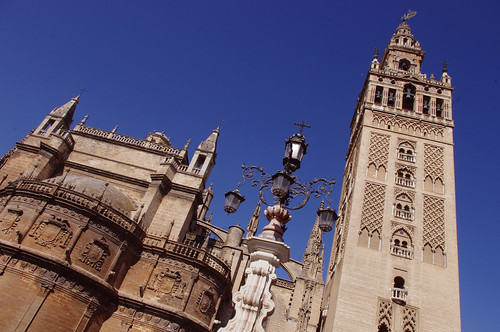 the giralda in the cathedral of seville

We decided to join a free walking tour of the city. The meeting point was at the Giralda, right by the Seville cathedral. One of the major sights in Seville and my first taste of Islamic architecture in the country, the church was a fine example of how former mosques were turned to churches after making modifications in the exteriors. As with the case of the Giralda which has since been converted into a bell tower, it looks very similar to some of the minarets in Morocco, even right to this day. It’s possible to climb up to the top of the tower, which we did after the walking tour. The view was fantastic and we could see the entire old town from up there. 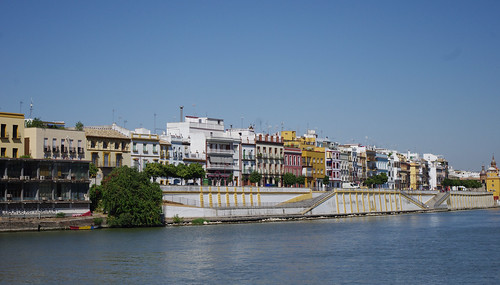 the neighborhood of triana right across the guadalquivir river, an important center for flamenco

The walking tour was very informative and we were quite lucky temperatures did not reach 40 degrees that day. It took us around the old town, past several buildings of note. We walked down to the river where we were able to get a good view of Triana. It’s a fiercely independent neighborhood with its own traditions. Some residents even consider Triana to be separate from Seville! 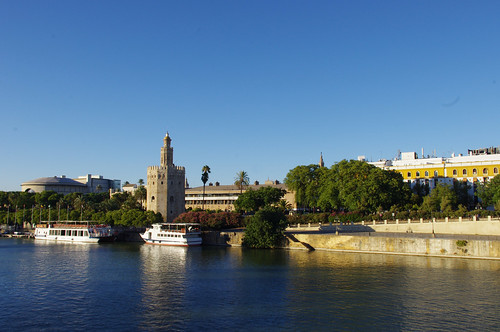 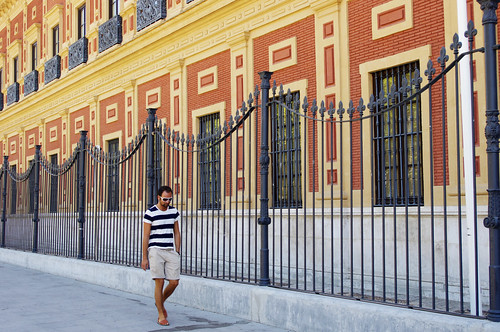 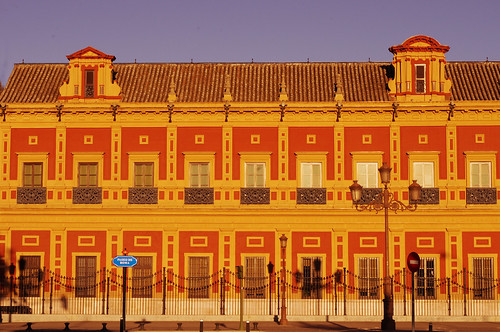 the bright colors of the palacio de san telmo

There were quite a number of things to see in the river area. The Torre del Oro (tower of gold) is a dodecagonal building that was built during the Islamic era and served various purposes, from a watchtower to prison. The picturesque Palacio de San Telmo was also nearby. This too, had served various purposes since it was built. Currenly, it is the seat of the Andalucian Autonomous Government as Seville is the capital of Andalucia. 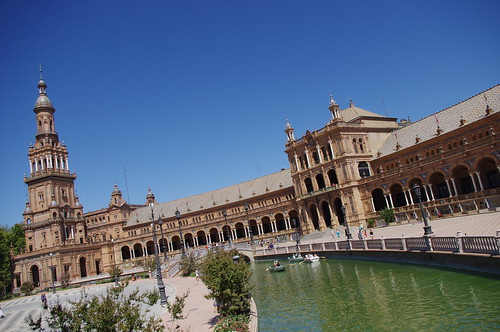 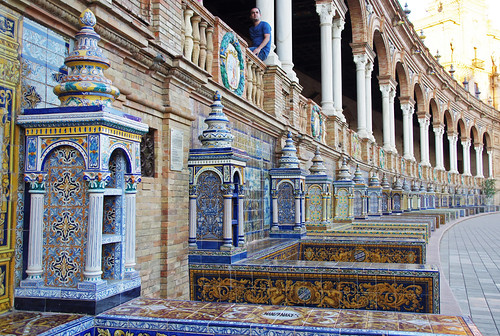 All these were quite interesting to look at. But the grandest building in Seville is probably the Plaza de Espana, a structure erected in the early 1900’s to commemorate the expo in Seville. We were there at midday and it was quite warm then but we still saw a lot of people riding the touristy gondolas in the nearby moat. By the way, those who have seen the movie “The Dictator” will easily recognize the building as the one used as the dictator’s palace. 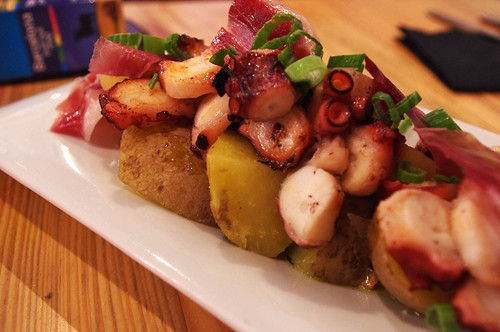 The free walking tour ended at about 1pm. We gave the guide Eur 5 each for his efforts (these guides are unlicensed and rely on tips to make a living). It was just the right time to have the typical late Spanish lunch. We decided to have it at Ovejas Negras which is quite near the cathedral. It’s a modern-type bar cum restaurant and served up some unusual types of tapas. We tried the gyoza which was surprisingly tasty, considering that Asian food here is usually nothing to write about. We also tried the pulpo (octopus), one of my favorite tapas and something I would order several more times for the duration of the trip. 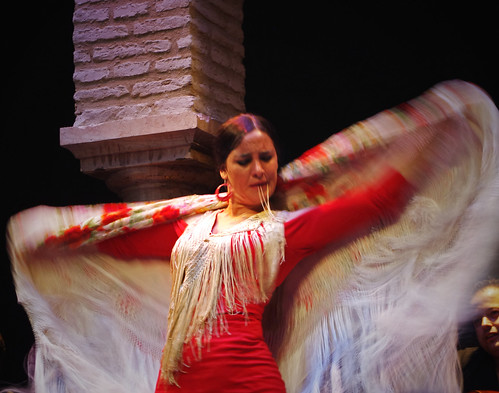 We then decided to do as the locals do and headed back to our hostel for some siesta while waiting for our booked flamenco show to start. Now I normally do not like to watch pre-packaged flamenco shows but the one held at the Museo Baile Flamenco (Flamenco Dance Museum) was not only authentic, it was also intense and passionate. It was not just the dance that was so absorbing, the accompanying live music also made for great entertainment. It was another stereotype come alive! 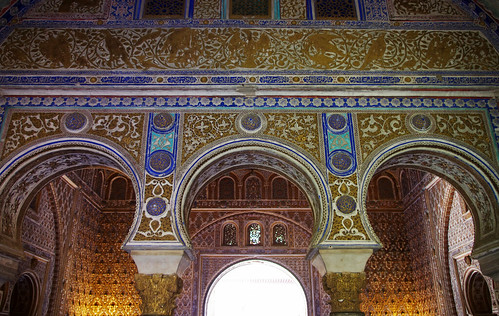 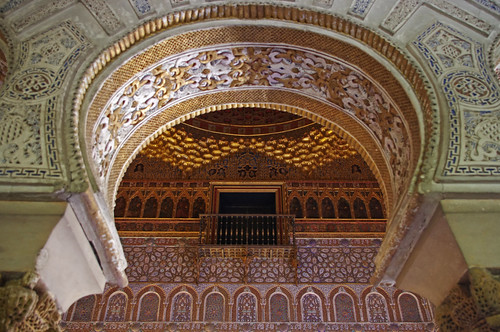 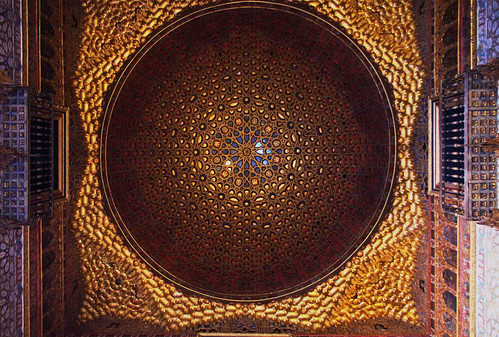 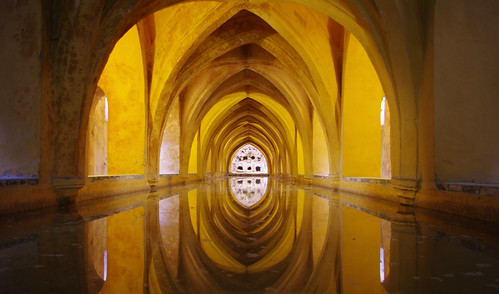 the evident moorish influence inside the alcazar of seville

Our second day in Seville was pretty relaxed. We had already covered most of the places we meant to but I was excited to see that one place that we had left – the Alcazar. Originally a Moorish fort (like in many other places in Andalucia), it was converted to a palace later on and have been used by both Moorish and Catholic rulers. It is a UNESCO World Heritage Site and is one of the oldest royal palaces still in use to this day.

We had another dose of tapas for lunch before heading off to the train station for our next destination which is Cordoba. Seville is a great city, no doubt about it. It served as my introduction to Andalucia and although it wasn’t the first or even second place I visited in Spain, I thought this was the very first place I stepped foot on which fitted my impression of what Spain is. Truly, all the generalizations about the country came alive here – and I’m saying this in a positive way.

Where we stayed:
Travelers Inn Seville is a homey hostel built on a former Jewish house. The very international staff are really helpful and always up for a chat whenever you feel like it. Breakfast and WIFI provided. Dorm beds cost Eur 18 each at the time of our stay as it was peak season, but it could go higher or lower than that depending on the time of year.