My journey towards the SQ Suites experience on the A380 was a haphazard one. After returning from a holiday in Pakistan and Taipei, I realized I had little time to prepare for my next trip. A quick glance through the weather channel showed that the temperature was -20 celsius in Ulaanbaatar in Mongolia, where I was supposed to be two days later. With my connecting flight to Beijing leaving early the next morning, I quickly dumped the thickest coats I could find and hailed a cab to take me to Changi Airport. 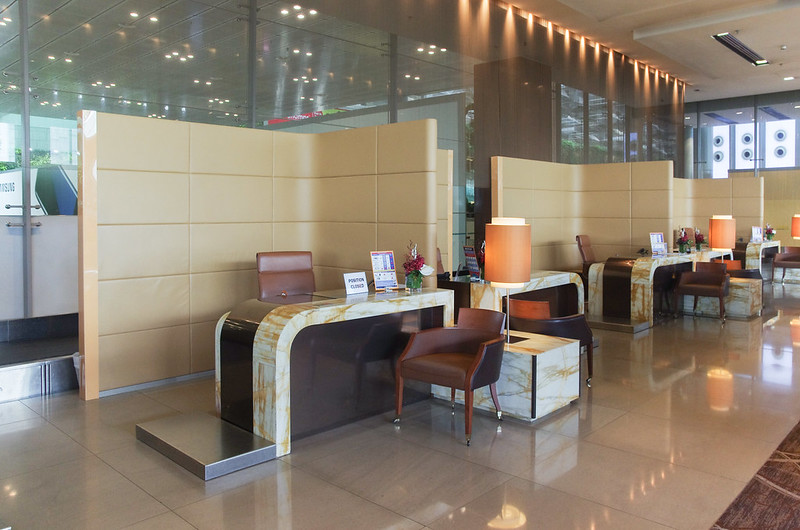 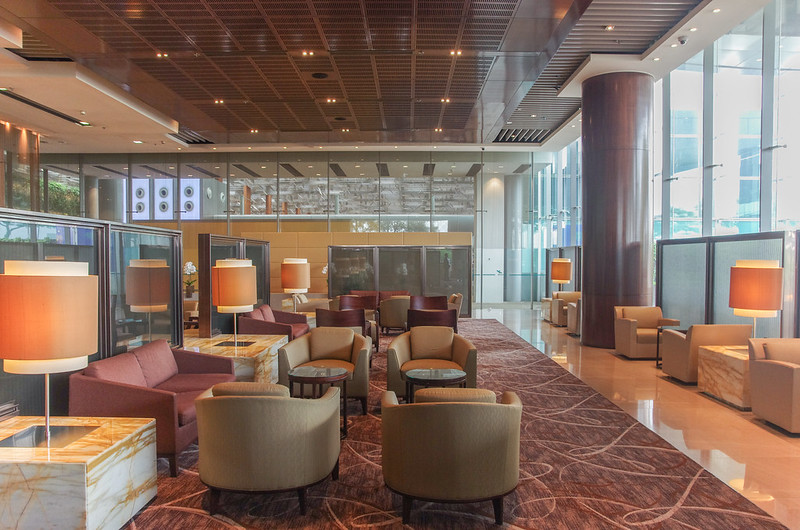 This was my first time flying in First Class and it soon dawned on me I had no point of comparison for it – not even with business class flights. First class passengers on Singapore Airlines actually get a dedicated check-in area in Terminal 3 which looks unnecessarily huge. The place has plenty of lounge chairs and more check-in counters than what you would find in economy class even though the number of passengers is disproportionately lower. Upon arriving, I found some staff members outside greeting incoming passengers as if they were entering some posh hotel. One of them even carried my luggage all the way to the check-in counter! 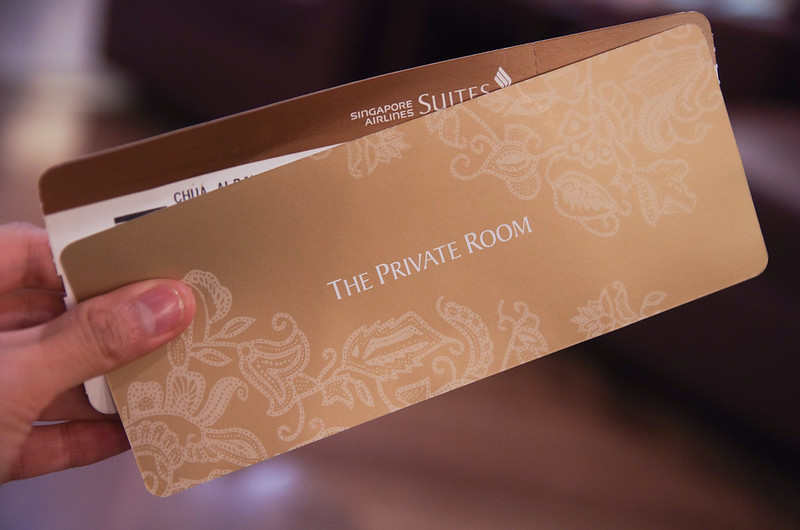 invitation to the private room 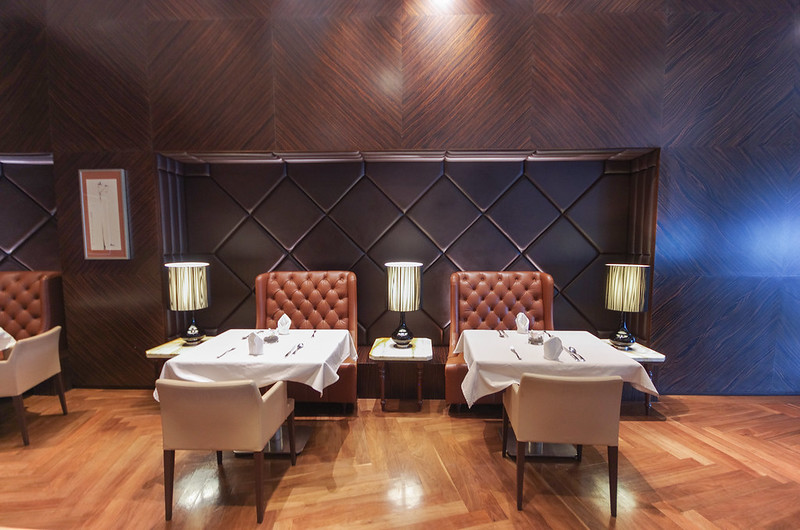 With my boarding pass and invitation to the Private Room in tow, I headed towards the direction of the Silverkris Lounge for some refreshments. The Private Room is a section within the First Class Lounge that is reserved just for passengers traveling in first class including Suites. The lounge is a lot more intimate with leather armchairs and a cozy dining room with a menu that varies depending on the time of day. Anyway, the service there is superb and I shall write more about my experience in The Private Room in another post. 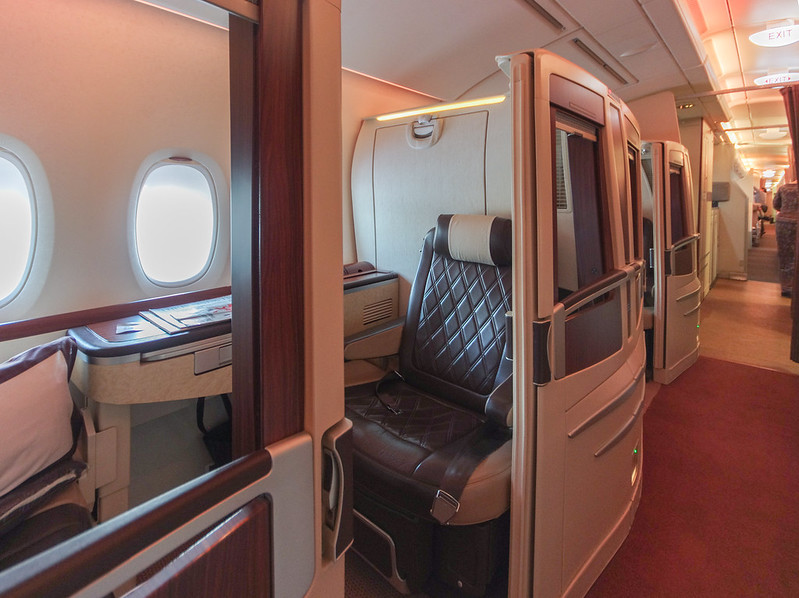 My seat for the flight – 3F

My flight for this particular journey was SQ 802 which utilized an Airbus A380. It had been some time since I was last in Beijing. The last time was in 2013 when I stopped by for a few days on my way to North Korea. This time, I was again heading to Beijing as a stopover to somewhere else. But I digress. Anyway, there are 12 suites in the cabin which follows a 1-2-1 seating configuration. My seat for this particular flight was 3F. The Suites are actually so wide that you will find 2 to 3 windows in each seat! 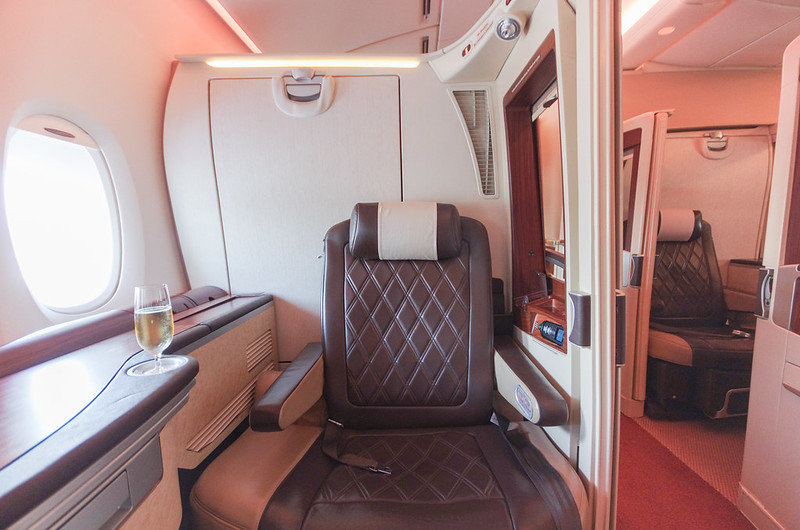 The Suite comes with a seat pitch of 81 inches and width of 35 inches, which is markedly bigger than the 55 inches pitch / 30 inches width in Singapore Airlines’ A380 Business Class and around double the dimensions in Economy (32 inches pitch / 19 inches width)! The seats are upholstered in dark leather. In case you are wondering how the seats could look so new despite being almost 10 years old, the Suites were actually refurbished a few years back. The original seats were upholstered in beige-colored leather. Singapore Airlines has also since refurbished some of the A380s and these now sport new types of Suites Class and Business Class seats. 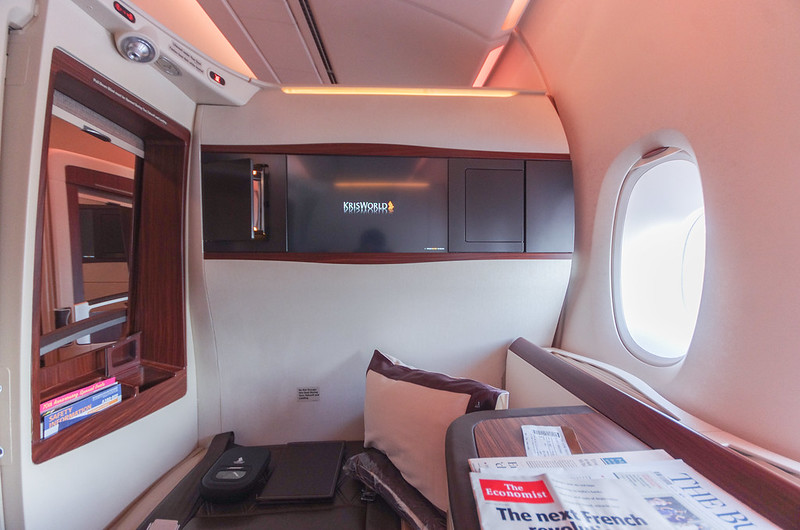 Before I could fully appreciate the spaciousness and impressive trimmings around the Suite, a few members of the cabin crew came by to introduce themselves to me.

The fact that all three of them came by in quick succession meant that this is probably routine in Suites but I still thought it was a nice gesture. It certainly made me feel valued as a passenger. 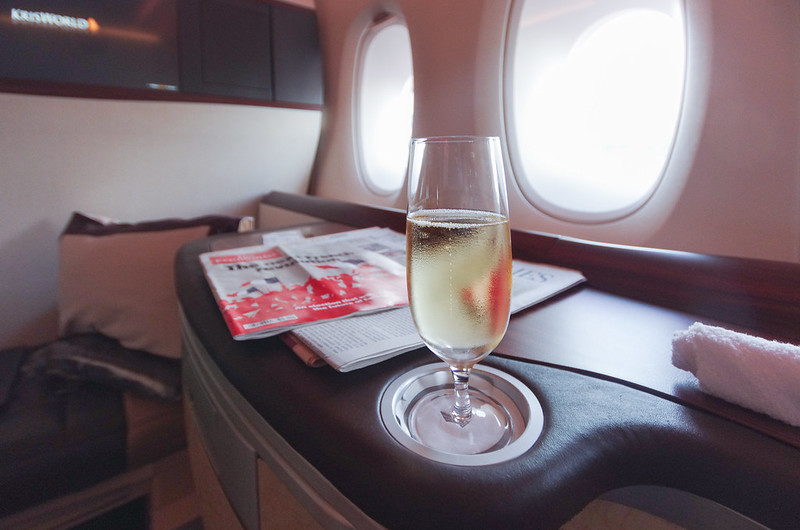 champagne before take-off and after take-off

After take-off, I was again offered some drinks. Singapore Airlines serves two types of champagne in First Class – the Krug Grande Cuvee and the 2006 Dom Perignon Brut. Having discovered quite a bit about the former during my stay in Mandarin Oriental Hong Kong the year before, I decided to go with a glass of Krug. 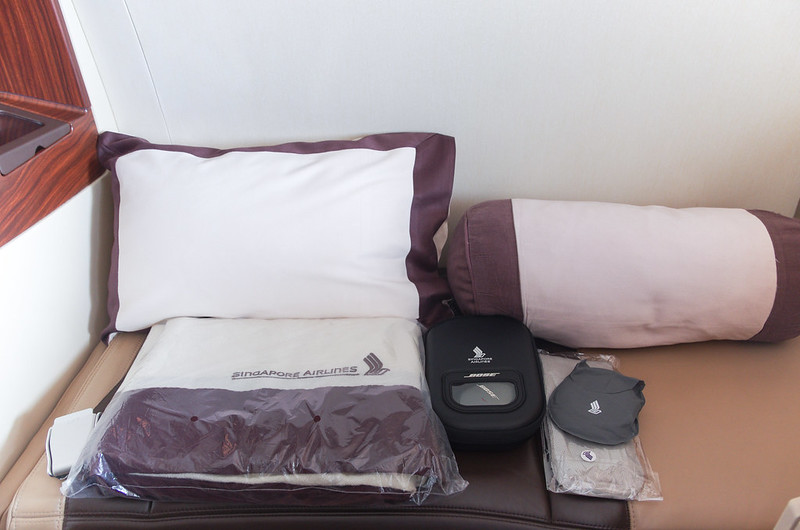 pillows, blankets, amenities on SQ Suites – you even get a bolster!

Some amenities were also delivered. As it was a morning flight, I was politely informed that I was not going to get any pajamas nor was I getting a toiletries set. Instead, I got a pair of slippers, eye shades and socks which was totally fine for a 6 hour daytime flight. 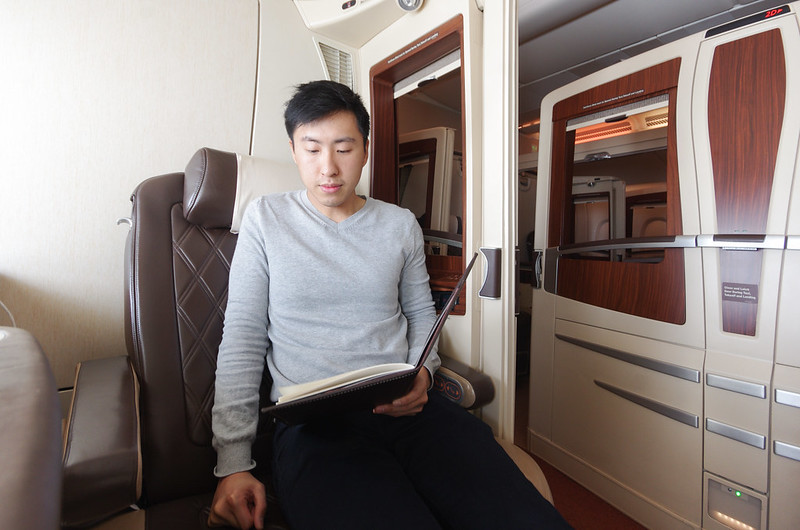 checking out the impressive menu on suites

Now onto the food. As it was a morning flight, the meal service was more modest compared to other Suites flights. However, I had availed of SQ’s Book the Cook service and pre-ordered the famed Lobster Thermidor as my main course. 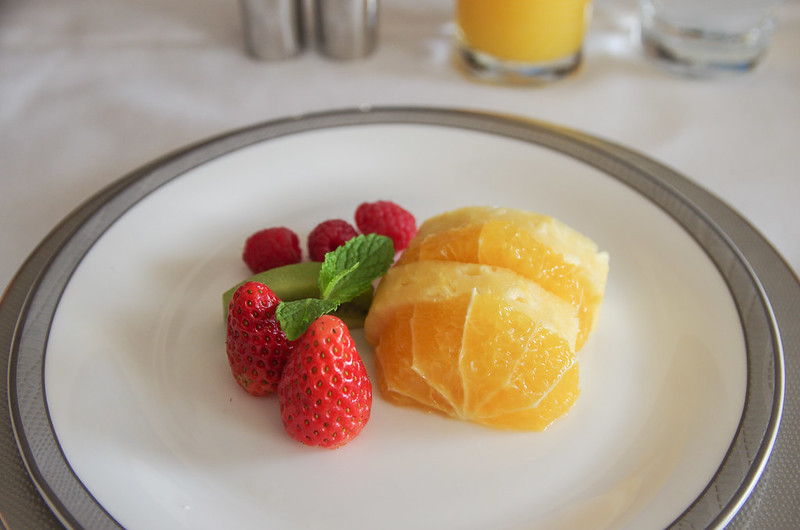 My first course was a refreshing Fruit Platter. It consisted of pineapple slices that alternated with oranges. It also came with a few strawberries and cranberries. Nothing much to say about them – these were just fruits but it’s definitely nice to devour strawberries 30,000 feet up in the air! 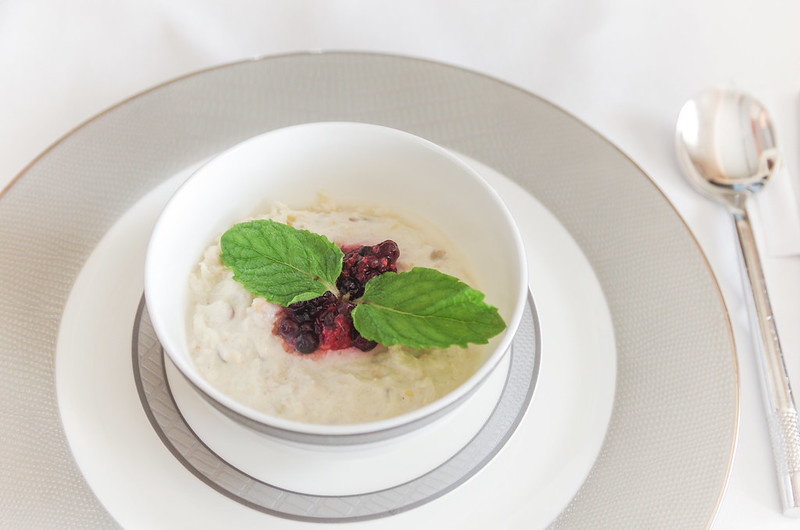 For the second course, I had a choice between yoghurt, muesli or cornflakes. I decided to have the Bircher Muesli. My bowl came topped with berry compote – sweet and delectable on the palate. At this time, I was also offered some rolls from the bread basket but I noticed my favorite garlic bread was nowhere to be found. I was told it was not available during breakfast service, to my dismay. However, they do have some crispy croissants instead which are really good with a butter. 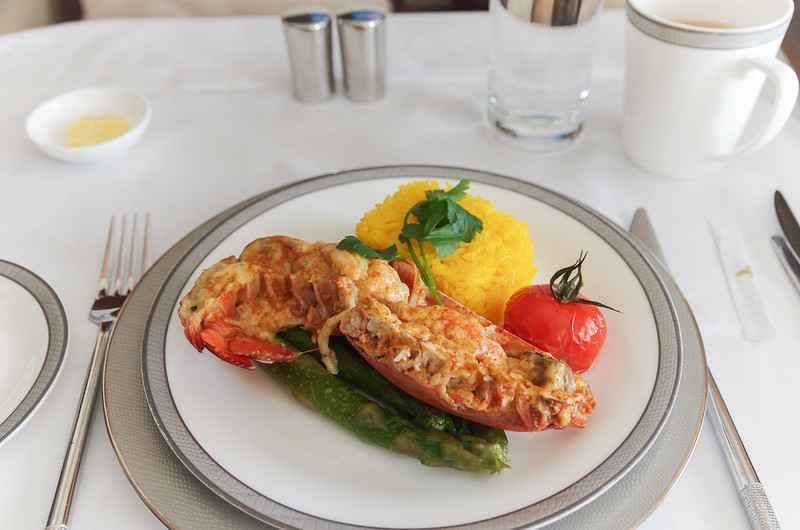 Before I knew it, out came my most-awaited Boston Lobster Thermidor. The creamy lobster was just as I remembered – a delight at every bite and very tender. It came with a side of what seemed like saffron rice. Other than the yellow color, the grain didn’t really taste any different from white rice. 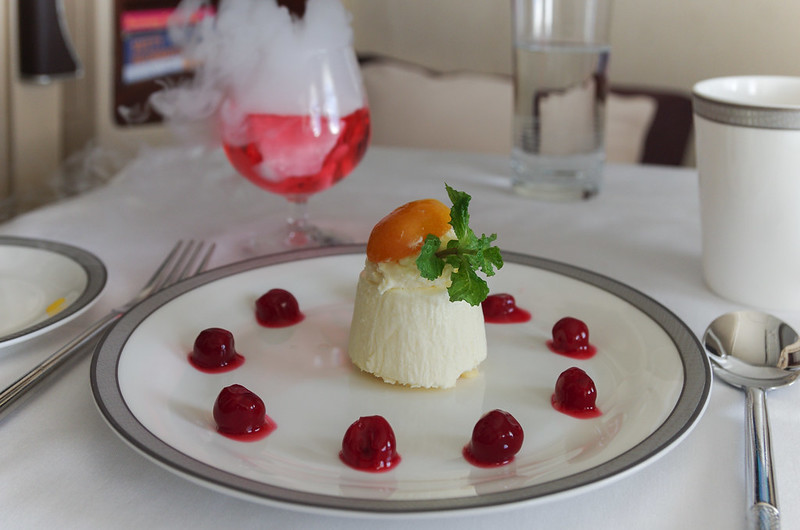 check out the dry ice creation behind!

For dessert, I was served the Buttermilk Cherry Parfait. I am not a fan of parfaits generally so I’m not really going to comment on this dish. I ended up just eating the cherries on my plate. For some reason though, the crew was quite excited about serving me my dessert. At one point, I had the leading stewardess, chief steward and the inflight supervisor over at my seat simultaneously as they wanted to show me a dry ice creation they made. 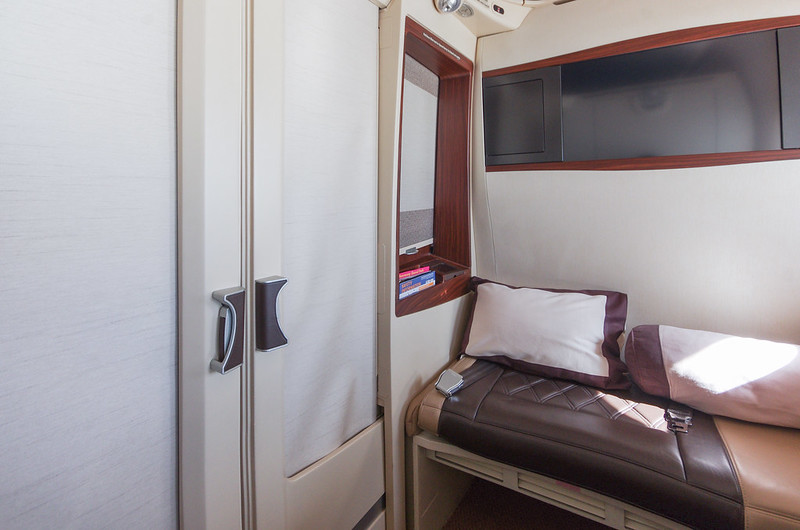 I was done with my four courses within an hour and I have to commend the crew for their quick service. I had wanted to finish my meal as soon as possible in order to get some shut eye and each dish was cleared as soon as it was consumed. I am a relatively quick eater and I do remember having to wait very long in previous flights with some other airlines. 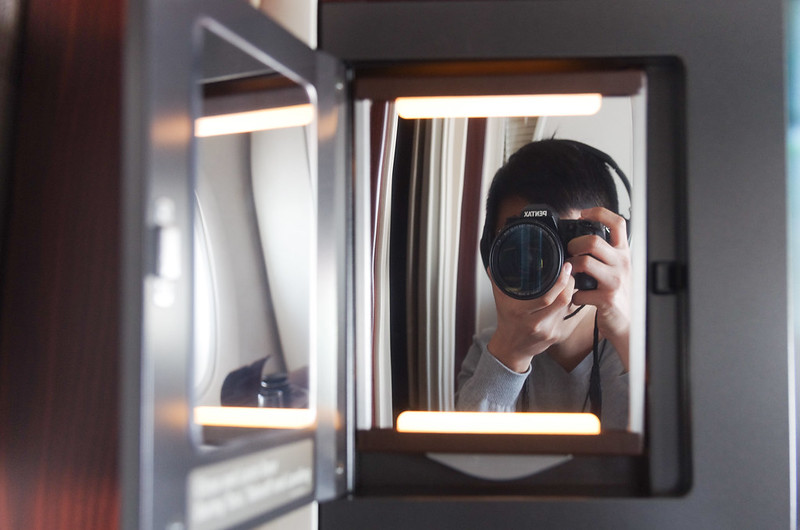 your very own vanity mirror in the suite

During the meal service, I had made a passing request to the stewardess to have the bed made after the meal in order to have a quick nap. The crew acquiesced and I was starting to worry whether all my carry-on baggage would still fit under my seat after it’s been transformed into a bed. 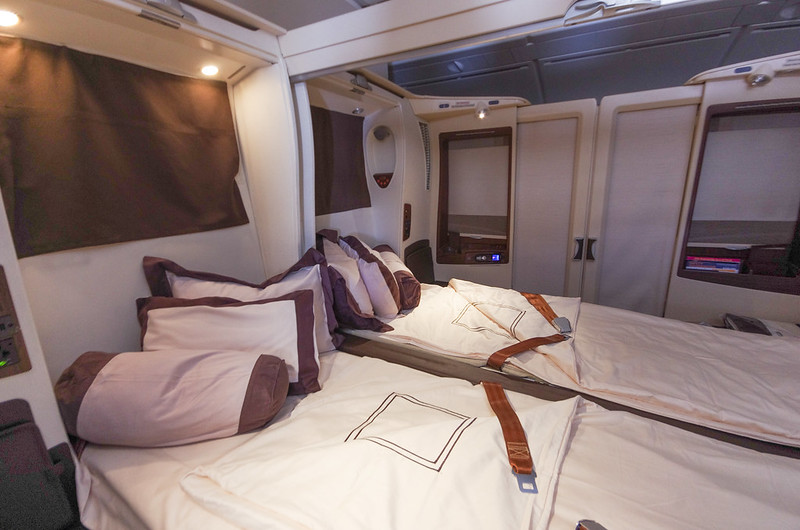 A few minutes later, I got up to walk to the lavatory and noticed the two adjoining Suites beside me had been turned into a bed. I wondered who it was for since the seats were actually unoccupied. Before I could even think much about it, the leading stewardess approached me and said, “Sir, your bed is ready!” to my utter surprise. 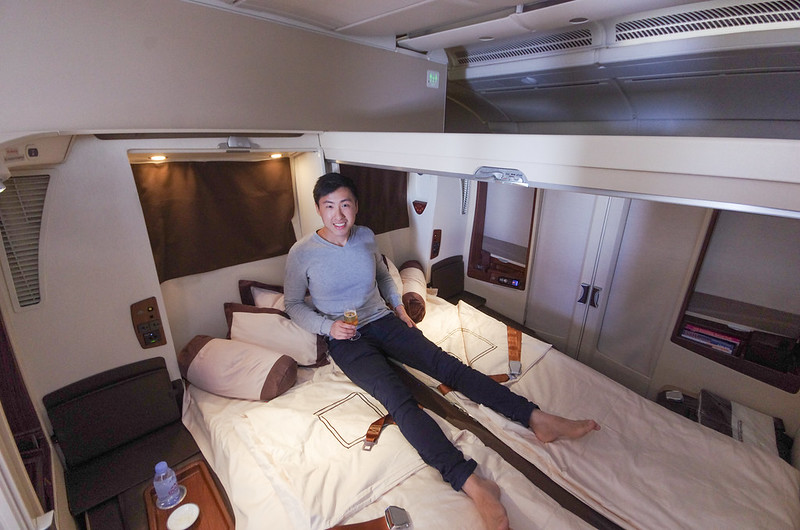 not one but two suites

Since Suites class was only 33% full, the crew actually prepared the two adjoining aisle seats (3C and 3D) for me so that I could get more space and still have me use my original window seat for my things. By this time, I was becoming quite awed by their thoughtfulness. It actually takes a bit of effort to convert a seat into a bed in Suites – much more if you’re converting two! 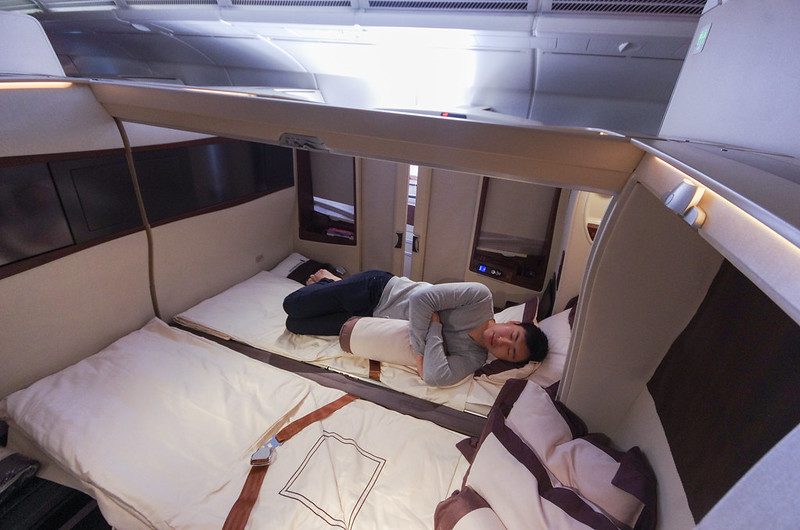 Much has been said about the two adjoining Suites seats that can be converted into a double bed. I still remember the series of ads that Singapore Airlines had run for years which featured these beds. That photo alone captured the public’s imagination about flying First Class. And here I was, late into the party, but unknowingly given the chance to try it nonetheless. 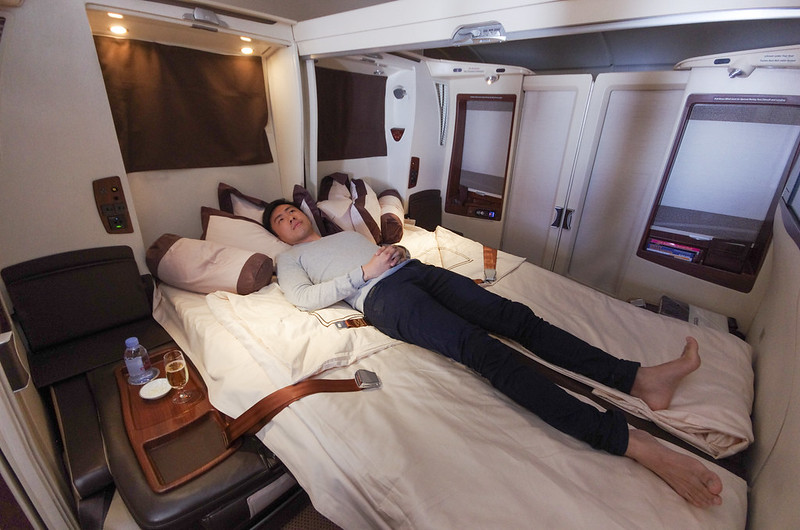 Theoretically, the two adjoining seats can indeed be transformed into a double bed. However, there is still a divider in the middle which can be easily felt. It’s not a big issue of course. It is possible to put a quilt and even extra blankets in this area or two people could just easily sleep on their respective sides of the bed. 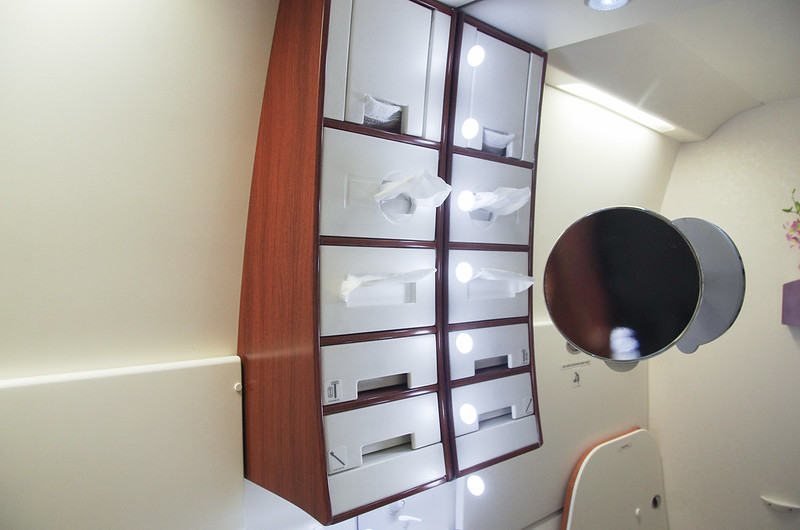 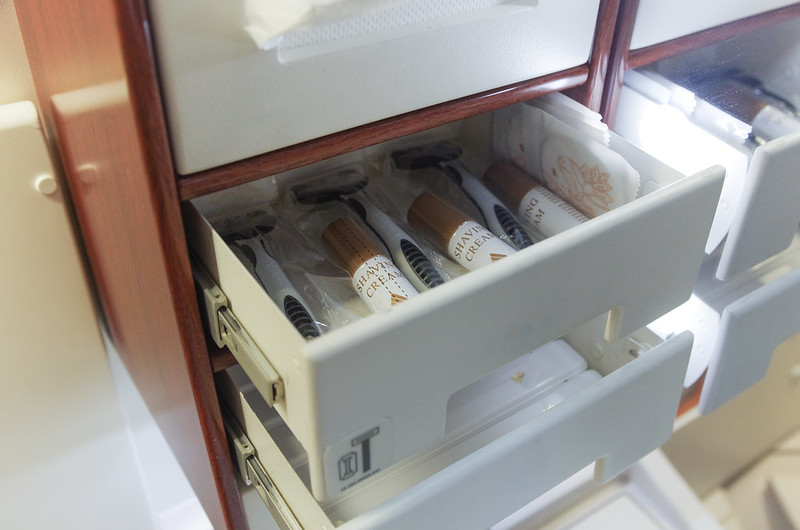 shaving kit in the bathroom 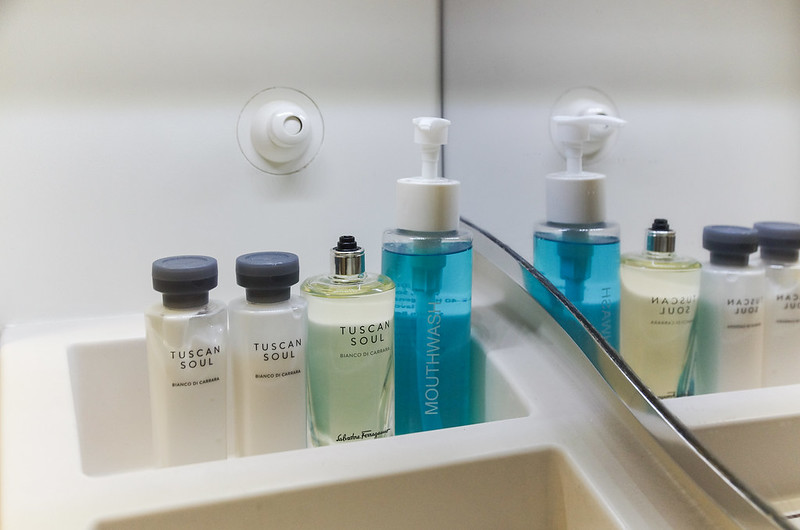 toiletries in the bathroom in suites class

I also took the opportunity to check out the lavatories. These were noticeably bigger than the ones you find in Economy but not by much. However, they’re dressed up better with fresh orchids hanging by the walls and plenty of premium toiletries by Tuscan Soul. Disposable dental and shaving kits are also available in the drawers. 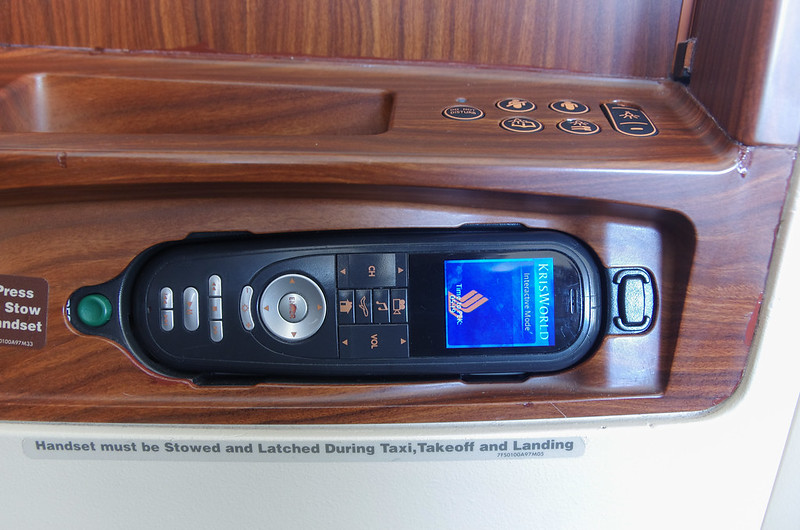 After a short nap, I went back to the comforts of my window seat in order to check out the inflight entertainment system, Krisworld. You can watch it from a humongous 23 inch LCD screen in front of you. Coupled with noise-cancelling Bose headphones, it surely makes for the closest to a cinematic experience on air. The leading stewardess came up to me again to ask whether I needed some recommendations for entertainment. With thousands of albums, tv shows and movies to choose from; you’d probably need dozens of long-haul flights before exhausting what KrisWorld has to offer. 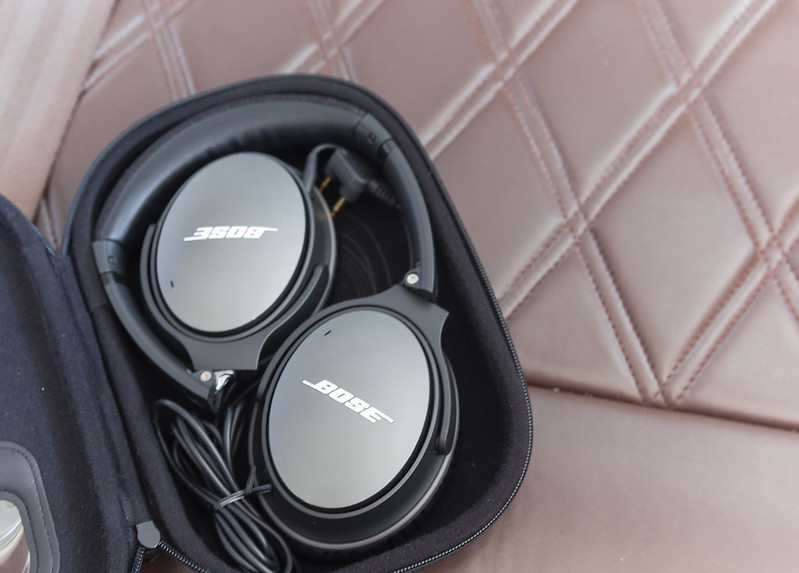 “I’d like to learn something,” I mustered in the least pretentious way possible. The stewardess then suggested a documentary about the hipster phenomenon, a show which did turn out to be quite informative.

A few minutes before landing, the inflight supervisor came up to me once more and asked if I had wanted a tour of the plane. “Sure,” I said. I had only been on an A380 once before that flight and I was really quite curious about the upper deck of the plane. Contrary to what I thought initially, all Business class passengers were actually up there, separated into two cabins. Downstairs, where the Suites were, I saw Premium Economy behind us followed by Economy. The A380 is one impressive bird by any standards.

Before I knew it, the plane was descending into Beijing Capital Airport. 6 hours is not considered a short haul flight but it is too short for such a luxurious experience in Suites. After all these years, Singapore Airlines’ Suites remains to be one of the great aspirational airline products. It still manages to fulfill (or even exceed!) one’s expectations. The service was incredible and beyond the much-talked-about bed, it was perhaps the dedication of the crew members which really impressed me. Overall, I am pretty glad to have used my credit card points to redeem for miles rather than some shopping voucher.

Best Seat to Get on Suites Class

With just 12 seats in the cabin, I would say there really is no bad seat on Singapore Airlines’ Suites. However, if you want to get a little bit more out of your Suites experience, you can choose the following seats for the following reasons: