Sakemaru Artisan Sake Hideout is a restaurant started by the group behind Sakemaru – a sake subscription service in Singapore. Their restaurant in South Bridge Road opened in early 2021 and features an extensively curated collection of over 300+ types of sake. They also have a food menu, with both ala carte and omakase (priced at S$200++) options. A quick glance through their food menu revealed some reasonably priced selections. I visited on a Tuesday evening and saw quite a good turnover of diners even though they have not been covered in social media or traditional media extensively yet.

The place is atmospheric at night, with dark interiors and staff members wearing outfits that might not look out of place in medieval Japan. Diners opting for the omakase get to sit on the relatively long counter. Sakemaru Artisan Sake Hideout offers its omakase for S$200++ per person, and diners can also choose among their sake collection to go with their meal. For this particular occasion, I had their omakase. 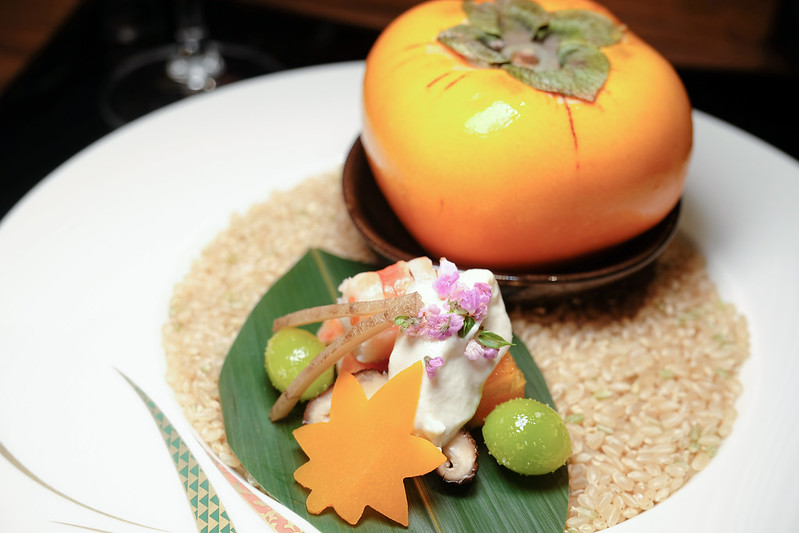 The first course consisted of Persimmon and Tiger Shrimp with Dashi Broth Jelly. This was an exquisite start to the meal. While the entire piece of persimmon seemed to loom large over the dish, it was merely there for decorative purpose and not meant to be consumed. 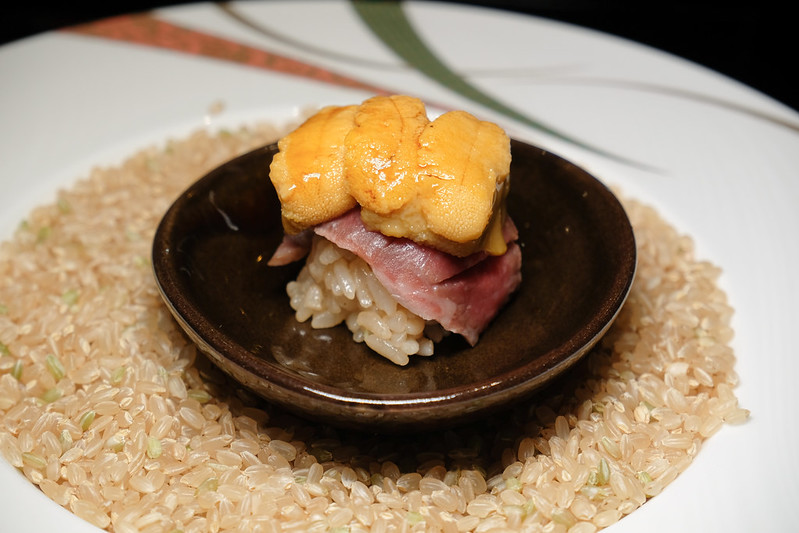 It was only after finishing the starter that I realized the persimmon was actually hollow. It revealed a piece of beef lying on a bed of rice when lifted – inadvertently unveiling our second course. Chef Yomogi Daisuke likes to give surprises to his guests and I have to say this was the first time I’ve encountered a surprise of this sort while having an omakase dinner. After the beef was unveiled, staff members came by to top it off with a generous dollop of uni for a most delectable Wagyu Uni Sushi. 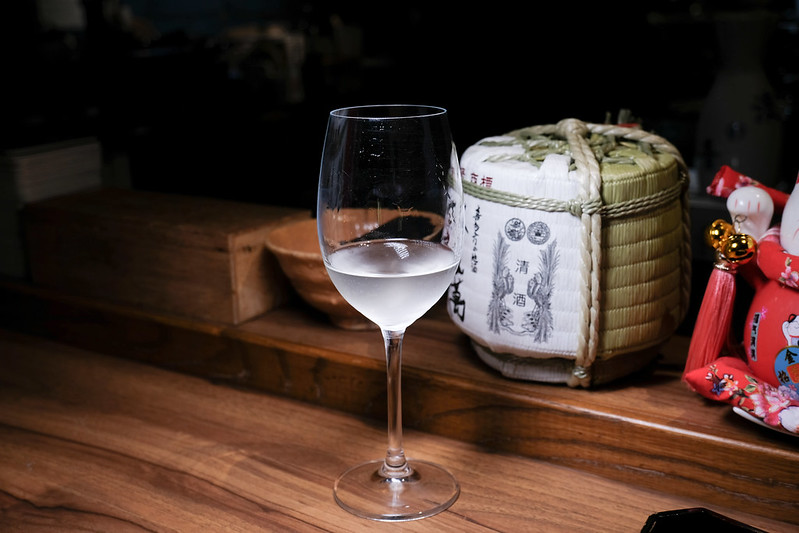 We were suggested to pair this with the Kasaichiyo Casareccio from Kyoto Prefecture. It carried hints of white koji and grapefruit – the fruity notes rendering it more apt to be served in a wine glass. 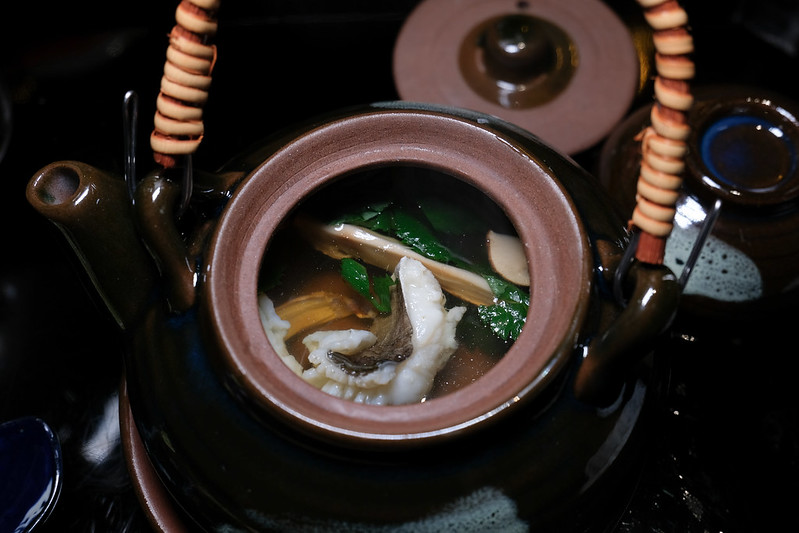 The next course was a nourishing soup with Matsutake Mushroom and Pike Cougar Steamed In Teapot. This was a dish that was best enjoyed two ways. First is by pouring the delectable broth in a small cup and enjoying each sip. After that’s done, one then digs out the moreish mushroom and bony pike within. 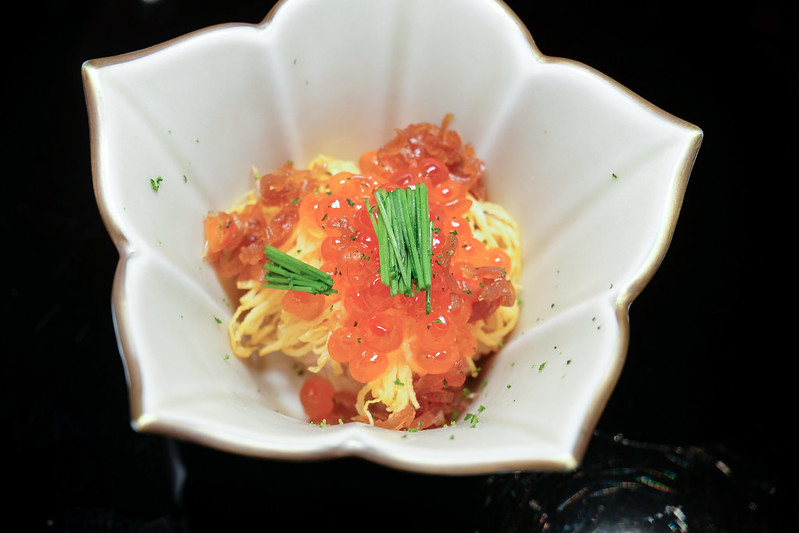 Our nigiri was paired with Shichisui Yumesasara 40 from Tochigi Prefecture. It carried notes of pineapple. 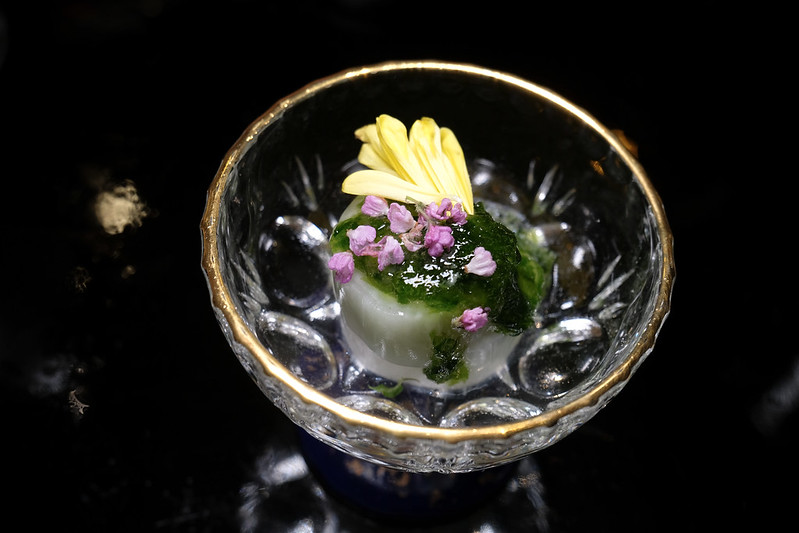 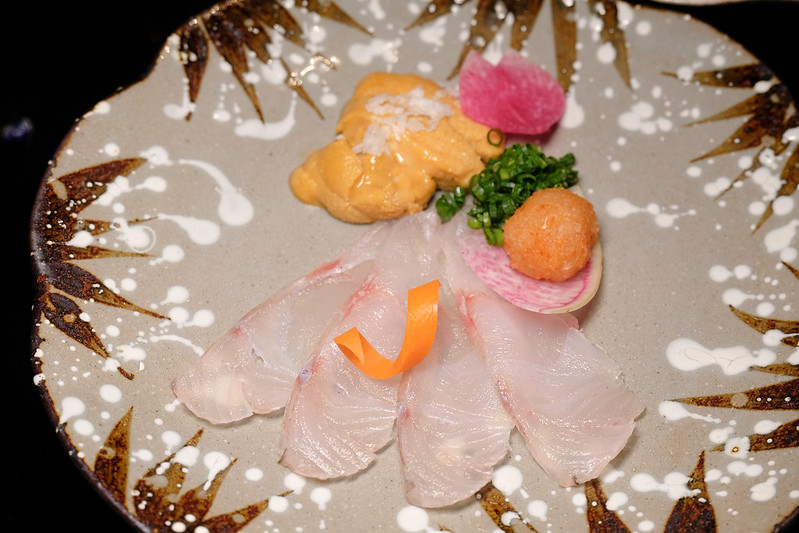 We were served three types of seasonal sashimi – Horse Mackerel Wrapped in Radish, Sliced Usuzukuri (Grouper) with Uni and Bluefin Tuna. The first sashimi course – the horse mackerel was notable with alternating layers of the fish and daikon – not what I expected to find in typical sashimi courses. 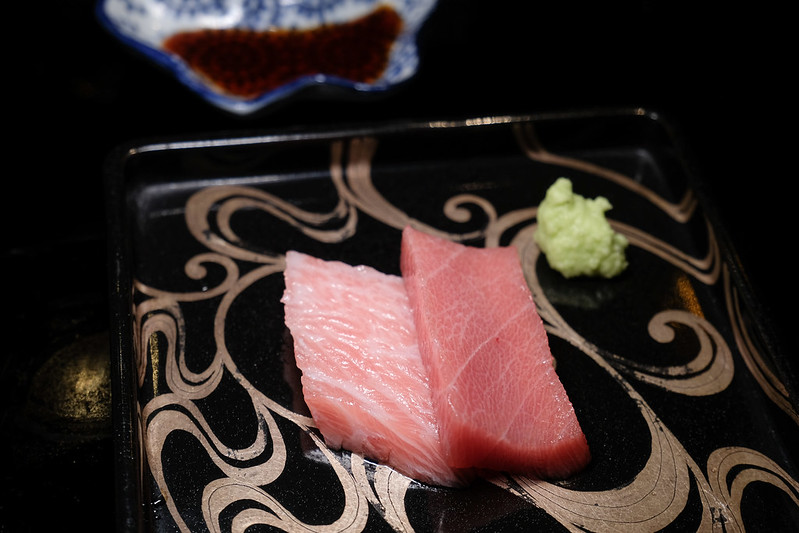 For the tuna course, Chef asked us to choose between otoro or chutoro. My answer: could I try both? Fatty tuna is my favorite type of sashimi.

Our sashimi was paired with the Sharaku Junmai Ginjo Yamadanishiki from Fukushima Prefecture. 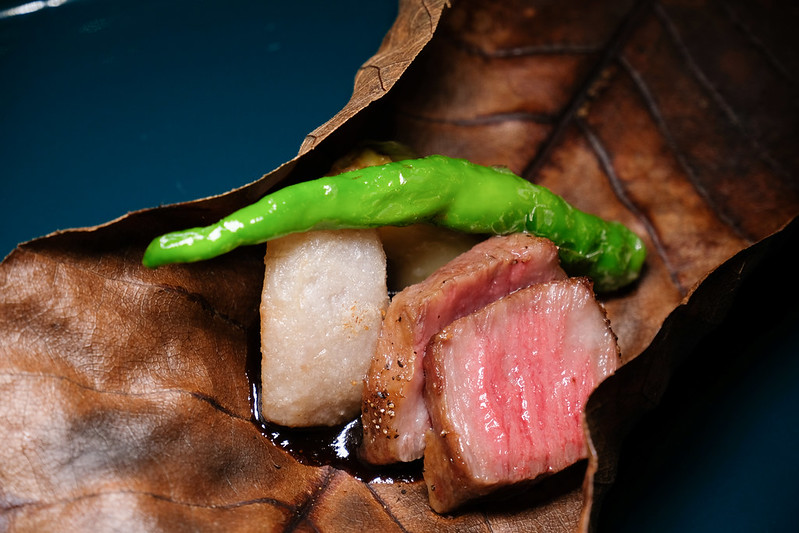 It’s exactly during times like these that one evokes great memories of past travels. For folks who have been to Central Japan – particularly to places like Takayama or Shirakawa-go, a popular dish one usually encounters there is grilled beef with miso on a leaf. Chef serves exactly that, with a most luscious Grilled Miyazaki A5 Sirloin. I particularly enjoyed slathering the miso sauce on the beef, which was among the most tender I’ve tasted as of late.

This was paired with Tengumai Yamahai Junmai from Ishikawa Prefecture carrying notes of vanilla, caramel and mushroom. It was served slightly warmer than room temperature, at 30 degrees celsius. 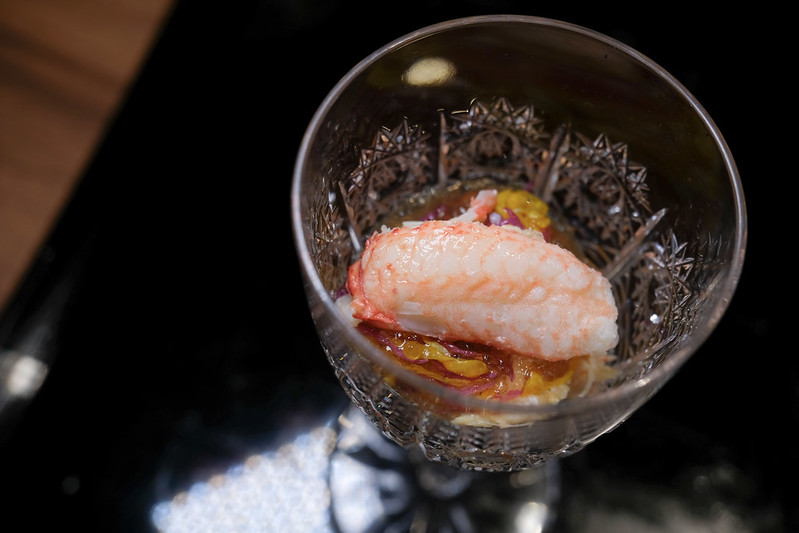 As an intermission of sorts, we were served the Hairy Crab with Tosazu Jelly Sauce. The dish came in a crystal glass with shavings of crab as well as a bigger piece on top.

Our sake pairing for this course was the Tatenokawa Muga Junmai Daiginjo Nama from Yamagata Prefecture. 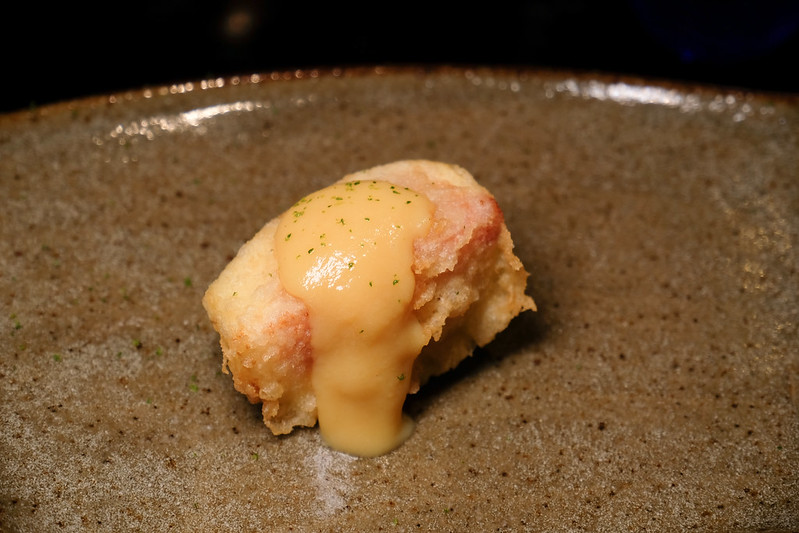 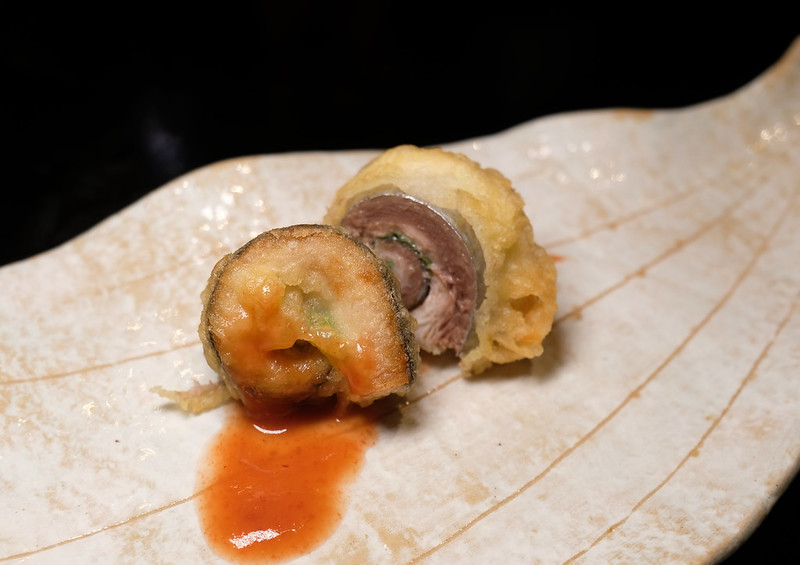 Our deep-fried course consisted of two parts. The first was Fig Tempura which went nicely with white miso mixed with yuzu. I would say the sauce made the dish. The second was Pacific Saury which was rolled with fragrant shiso leaf. Chef used ume sauce for the fried fish, rendering a slight citrusy feel that complemented the uplifting flavor of the shiso leaf. Somehow, this combination lessened the heaviness I usually feel when I eat deep-fried items.

Our sake pairing for this course was the Nabeshima Blossom Moon from Saga Prefecture which carried notes of strawberry. Notably, Tajima Gouriki rice is used for making this sake. 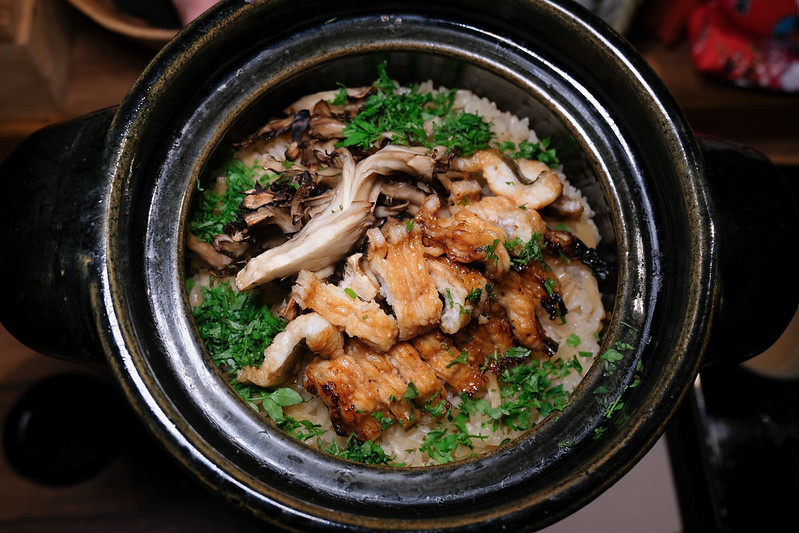 One can’t really say no to good claypot rice. At Sakemaru Artisan Sake Hideout, Chef actually cooks it on the spot so there was a bit of a waiting time to get to our carbohydrate dish. The Mushroom and Sea Eel Claypot Rice was relatively light – which was just right as one is often stuffed by this part of the meal. The mushroom and sea eel toppings came in strips.

We also got a bowl of miso soup afterwards.

This was paired with the Kuromatsu Kenbishi from Hyogo Prefecture. The sake is served slightly warm, at 45 degrees celsius. To achieve this temperature, the sommelier puts the sake first in a metal cup which is then soaked in warm water. A thermometer is placed on the cup to carefully measure the temperature before serving. 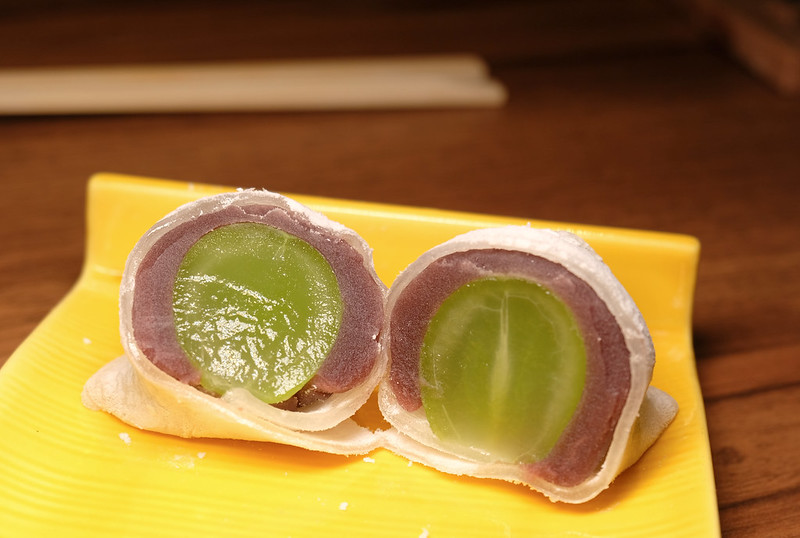 The daifuku which we had as dessert was served to us already sliced in half. It featured a plump piece of muscat grape in the middle with the bean filling isolating it from the skin. It seemed to have been homemade as I noticed the skin was only lightly wrapped around, allowing for the three layers to be easily separated. I have always been partial to mochi type of desserts so this was a particularly apt ending for me.

As a relatively new and under-the-radar restaurant, I was pleasantly surprised with Sakemaru Artisan Sake Hideout. I appreciated the surprise during the meal as well as Chef Yomogi Daisuke’s dedication which was reflected in his friendly demeanor and insistence to cook most of the dishes personally despite having quite a few staff members to assist him. The only downside here is that the dinner takes longer than usual because Chef will only start cooking some of the dishes after the end of the previous ones. I am also quite intrigued by their ala carte menu after having seen the reasonable prices and have bookmarked it in my mind to try next time.

Daily except Sunday, 5PM to 10:30PM (opens at 3PM on Fridays and Saturdays)