Labyrinth is not the restaurant you go to if all you’re after is to have reliable and tasty Singaporean food. You’d be better off in a hawker center if that was your sole intention.  The type of local cuisine presented in this venue helmed by Chef Han Li Guang is so carefully deconstructed that dining here is very much an experience that defies the traditional concept of eating. It is probably no wonder then that Labyrinth has won a number of awards, the most prominent being the Michelin Star it has had for a few years. Truly, this is a place for the thinking and discerning gourmand.

I was recently invited to check out the revamped menu at Labyrinth. Chef Han Li Guang himself attributes his cuisine as a constant work in development that mirrors where he is in his personal and professional life. Similarly, the new menu has evolved from one that showcases fancier versions of local favorites to one that shows off the bounties of local produce. For a country that is just over 700 square kilometers, it is probably hard to picture farms and fisheries where one can get local produce but Labyrinth’s new menu shows exactly that – through postcards that tell stories and inspirations behind each dish. The new “Homage to My Singapore” menu comes in three versions – lunch, pre-theater (the restaurant is located in Esplanade after all) and dinner. My visit to Labyrinth coincided with dinner which is offered at S$178++ per person. 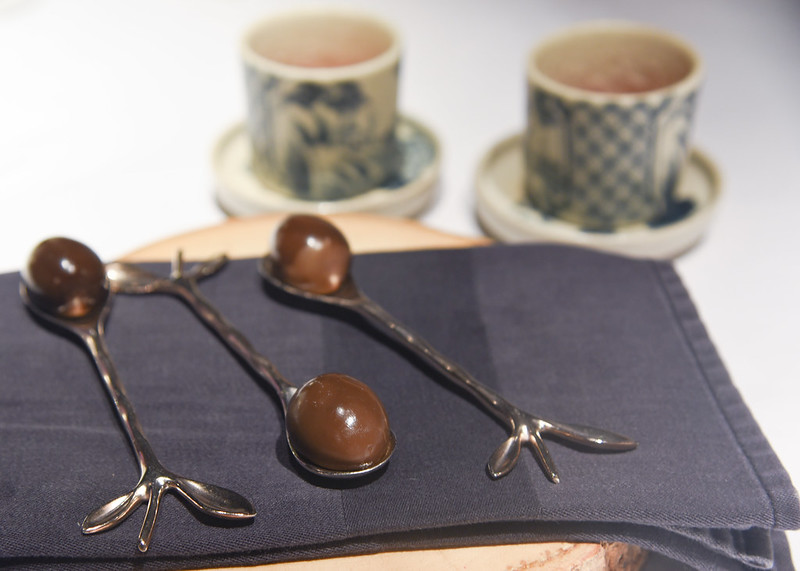 Serving as a an amuse bouche, the Oolong Tea Egg sets the tone for dinner. The yolk inside the quail egg burst easily with one bite and carried a smoky flavor coming from the oolong tea. 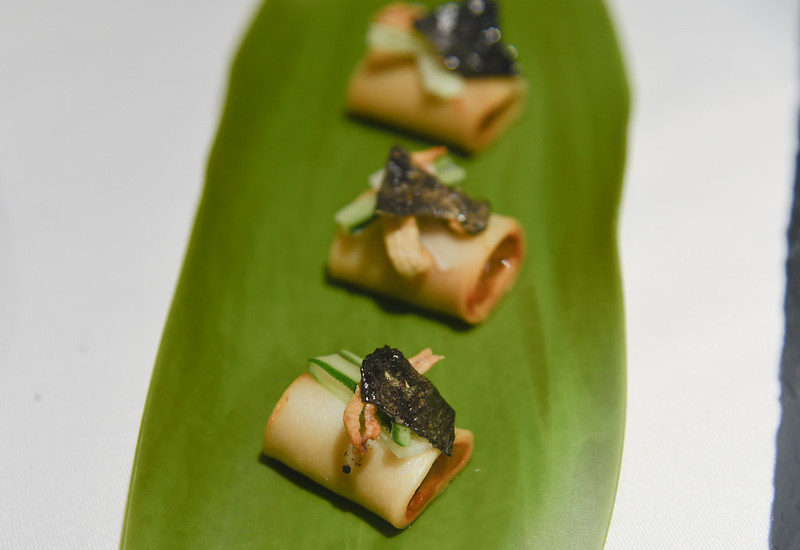 A series of starters come after that, the first being the Nasi Lemak Cheong Fun. We are all used to having this dish as a hearty meal with plenty of rice, curry as well as sambal but Chef Han has managed to encapsulate the entire flavor of the nasi lemak into these bite sized pieces, complete with chicken skin and ikan bilis that give it a crunchy texture. 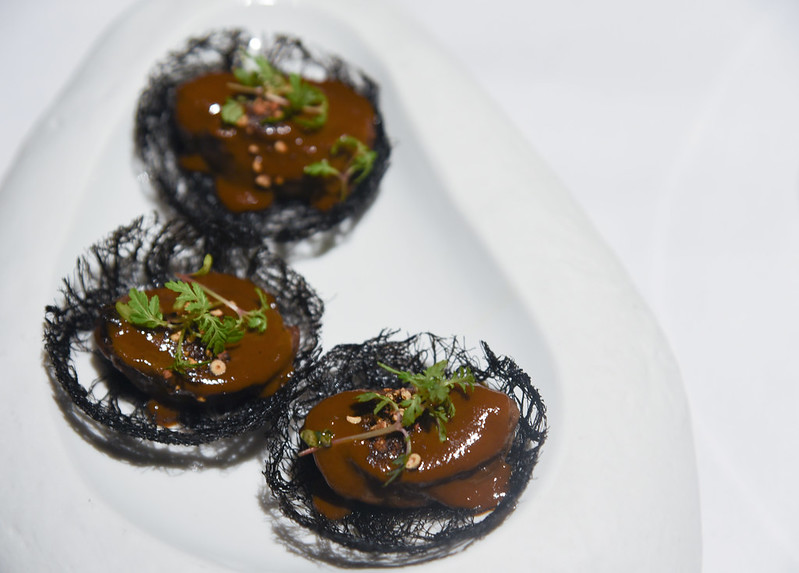 The Braised Baby Abalone was creatively made with a small dried abalone topped with oyster sauce and sitting on a nest made of black moss that’s been rehydrated then dehydrated. I’d imagine it’s a taxing process. 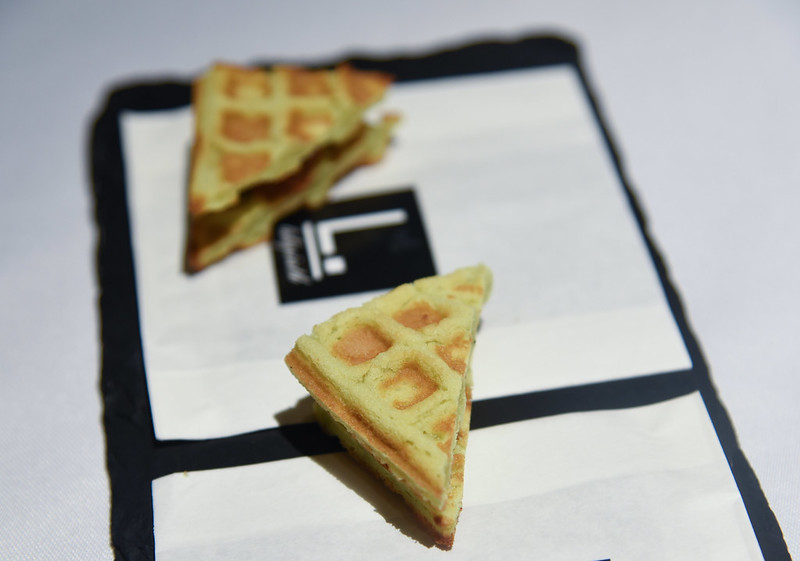 People in my table particularly liked the Heartland Waffle. I could easily imagine why. The very traditional and homely feel of Singapore was perfectly captured here. There’s local duck liver pate and goji berry jam sandwiched between for a taste of home, rendering this one of the most accessible dishes in the dinner menu. 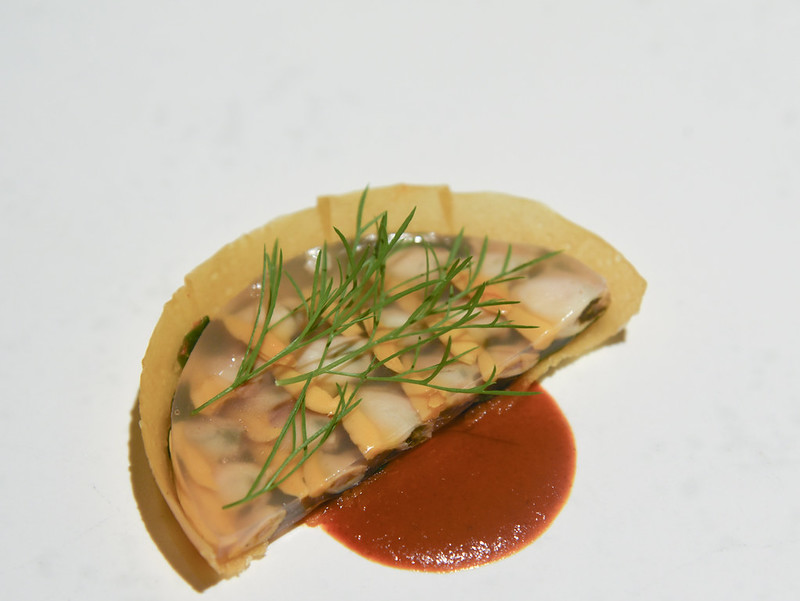 While the waffle was the most accessible, the course that Chef Han admits to being the hardest to prepare is the Ah Hua Kelong La La Clams. Presented like a tart, with wanton skin as its outer layer and with the clams all meticulously lined up and covered in jelly – this was such a joy to eat. The clams are notable for originating from Ah Hua Kelong Fish Farm which means that it’s locally sourced. There’s also some XO sambal underneath the “tart” for that extra kick. 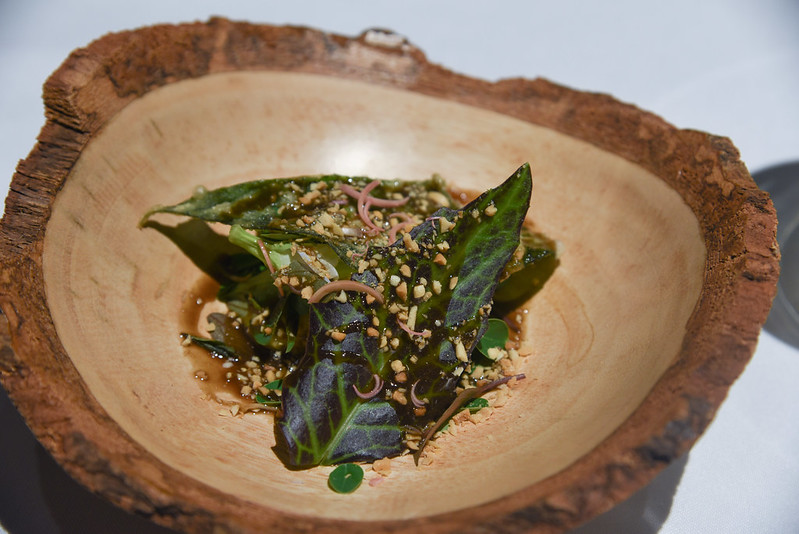 I would rarely pick a vegetarian dish but I have to say I was smitten by the Labyrinth Rojak. Comprised of a multitude of herbs mostly sourced from Edible Garden City, I have to say that this was one of the most fragrant rojaks I’ve ever had. The salad is dressed with stingless bee honey coming from Batam, giving it a bit of a sweet and sour flavor. To top it off, cempedak and jackfruit sorbet give this dish an added complexity you won’t find in your usual rojak. Rarely can something so guiltless be so good. 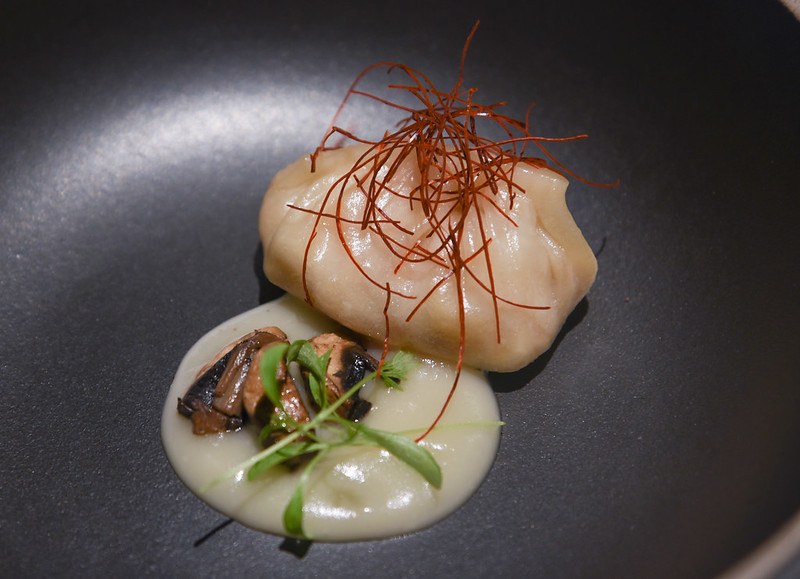 An interesting take to the usual chicken rice, the Ang Moh Chicken Rice is presented in dumpling form. The chicken filling within is cooked in ginger sauce and sesame oil and give off that authentic chicken rice flavor together with the chicken rice stock the dumpling is cooked with. This is best eaten when slathered with the white sauce made with mushroom and chicken fat. 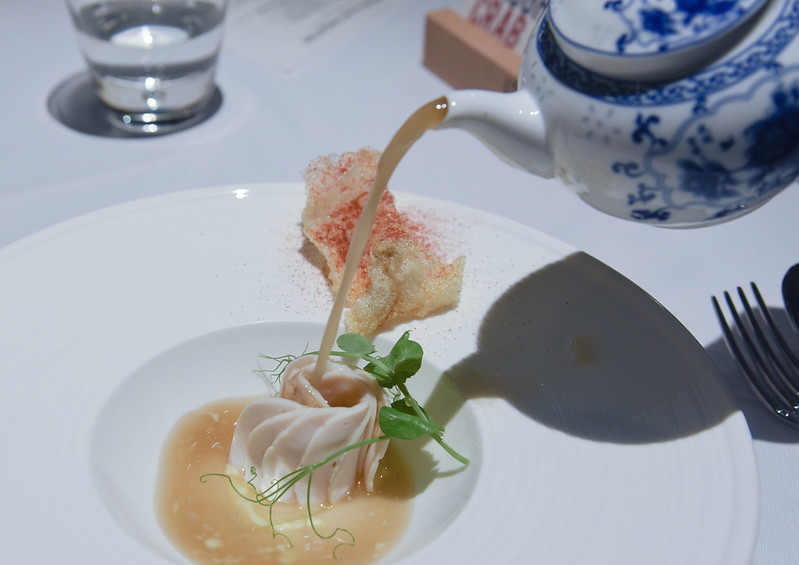 Fish maw is enjoyed two ways in the Grandma’s Fish Maw Soup. First, in braised form together with the broth and second in crispy dehydrated form as a crackling. The latter is recommended to be eaten first to fully enjoy the crispy texture. 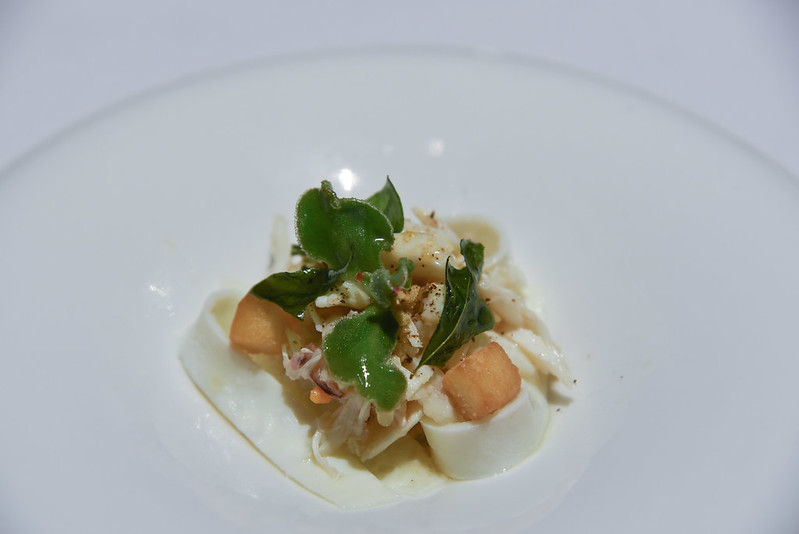 By the time I got to the Local Wild Caught Crab, I’ve noticed a pattern with the dishes in this menu. There is a tendency to use local sauces in sorbet or ice cream form and such is the case with Labyrinth’s take on the classic Singaporean crab dish. Live flower crabs from Ah Hua Kelong is presented in deshelled form and comes with egg white and salted mackerel. There’s chili crab sauce here too but it comes in ice cream form which will leave you pondering about chili crab for a while, as was the effect it had with me. 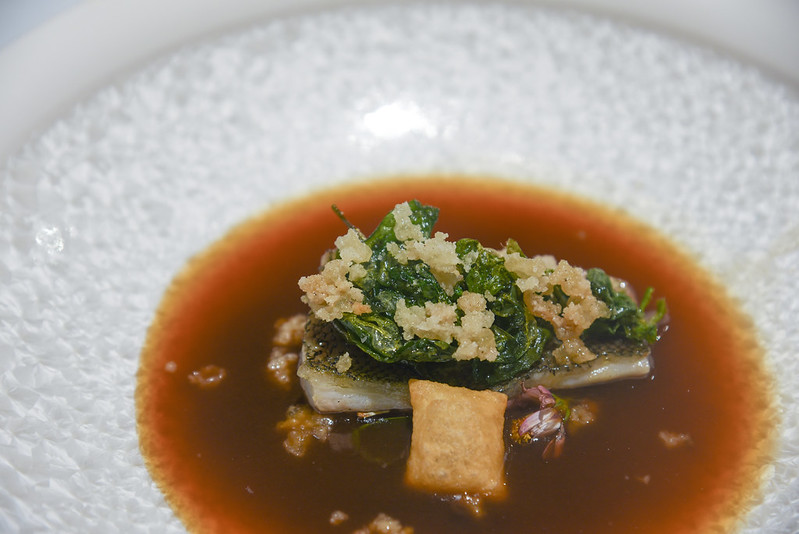 A highly herbal broth sets the tone for the Nippon Koi Farm Silver Perch which is Labyrinth’s take on bak kut teh. The dark and overpowering broth evokes memories of the Kluang version of bak kut teh. 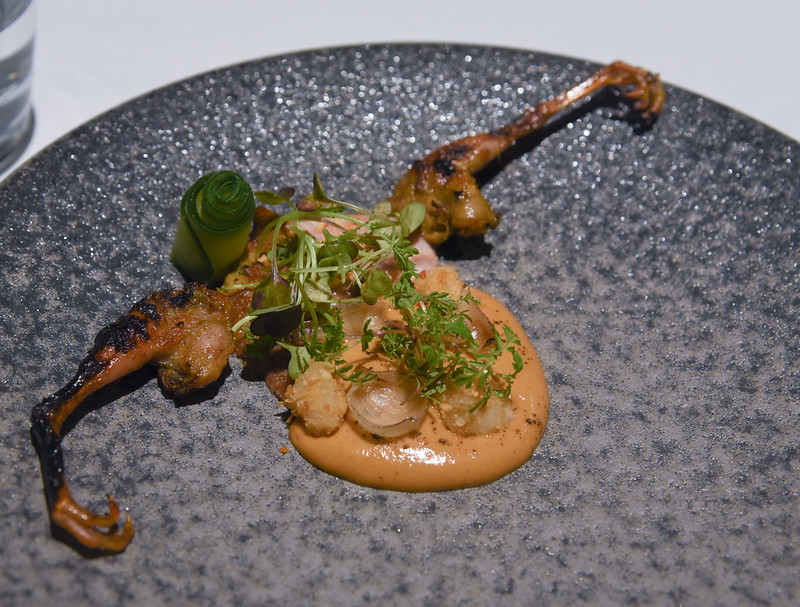 I have not eaten quail for a while but I was pleasantly surprised by the mild-flavored Uncle William’s Quail which lacked the gaminess often associated with the bird.  The quail is explicitly presented here, with the feet and all. It comes with satay sauce which is thickened by peanut butter instead of the usual starch. 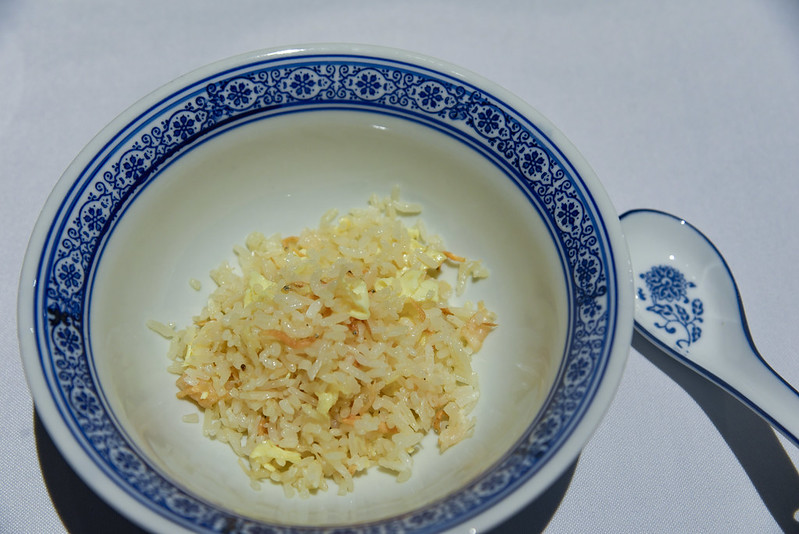 For a simple and ubiquitous dish, I quite loved the unpretentious Lost Grain Fried Rice with its crispy white bait and hae bee that I made sure to finish every grain. 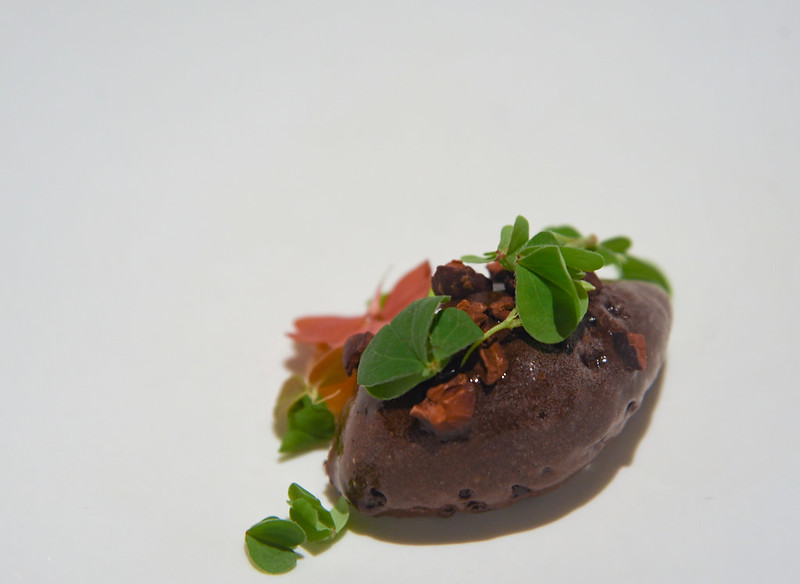 bean to bar at labyrinth

Chocolate lovers would probably love the Bean to Bar with its thick and bitter chocolate sorbet. I’m not a chocolate fan at all so I can’t comment much. 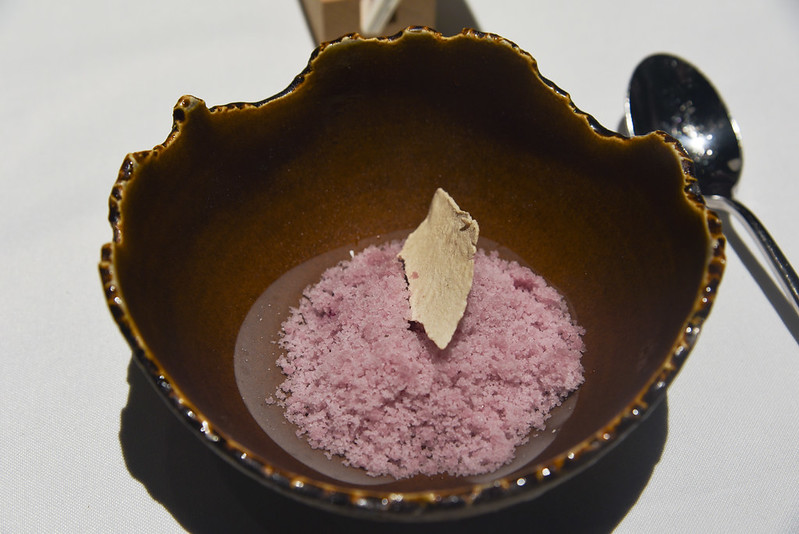 I thought the Oyster Plant Snow with its grape espuma interspersed with pomegranate seeds was a refreshing break from the mains. 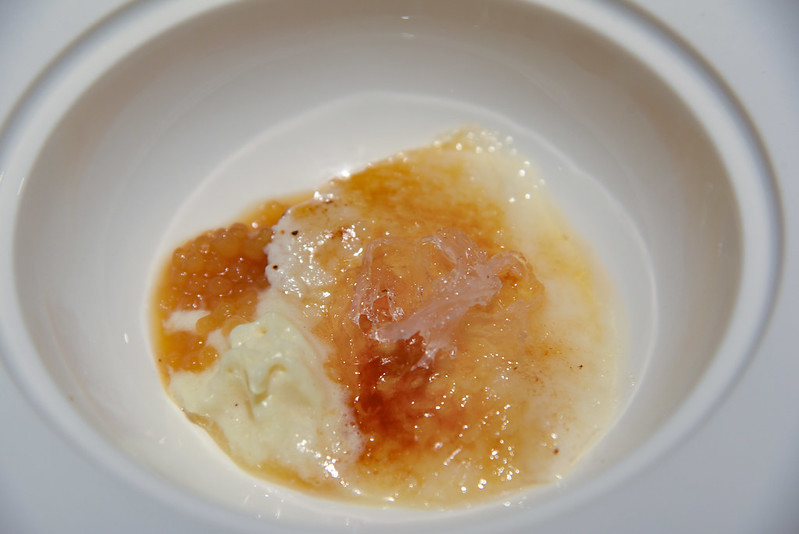 Among the desserts, I have to say I am partial to the Soy Bean Curd. Delightfully smooth and silky, the custard is complemented by the slightly pungent yoghurt that is made with goat’s milk. 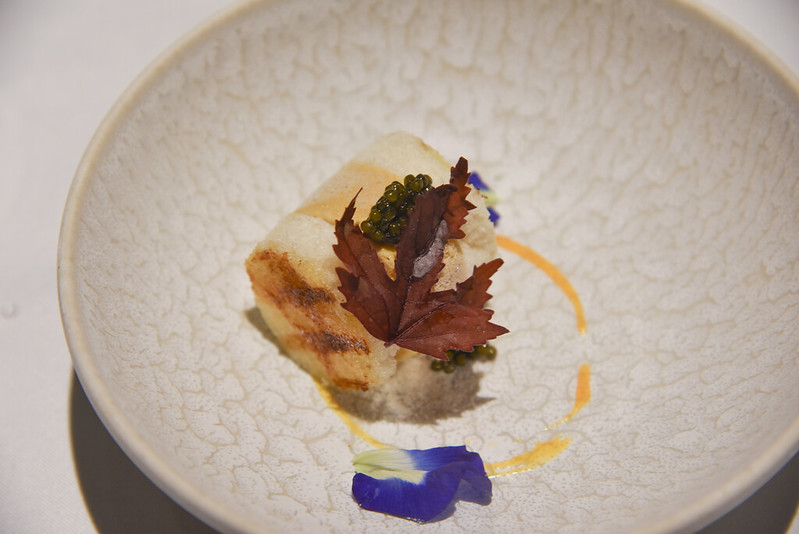 Continuing the pattern of making ice cream out of sauces and creams, the Cristal de Chine Caviar is a luxe version of the kaya toast. It is served the Singapore way, with the kaya toast ice cream sandwiched between two pieces of toast shaped in cylindrical form. The bread actually comes from Sin Hon Loong, one of the few remaining old school bakeries in Singapore.

With the way the menu at Labyrinth has evolved, the cuisine is more akin to art and is far consigned from food’s utilitarian purpose. This is the place to go to be pleasantly surprised, especially for purveyors of local and homegrown cuisine and for those who seek to bring a different kind of experience to foreign friends and business partners who are visiting. You’re sure to hear oohs and ahs during the meal.