Departing from the formulaic themes found in hotel restaurants, Park Hotel Clarke Quay seems to have taken a step into the right direction by revamping the previous Chinese buffet concept, Brizo and turning it into a refreshing modern European restaurant. Officially called Porta Fine Food & Import Company, the new venue aims to provide an eclectic array of European dishes with an emphasis on seasonal flavours. The restaurant recently conducted a media tasting and I was invited down to sample some of their best dishes. 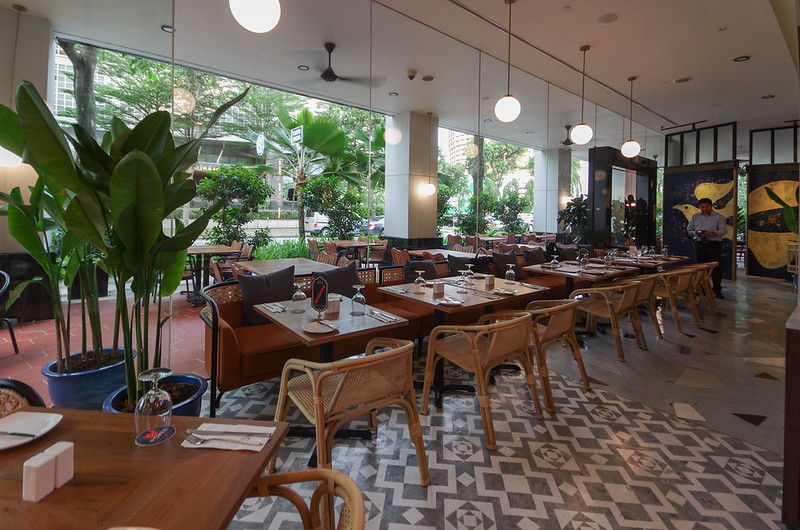 Porta is helmed by Executive Chef Michael Suyanto who had his most recent stint at Bistro du Vin from the Les Amis Group. Entering the restaurant for the first time, I was reminded of Spanish and Portuguese sensibilities especially with the Moorish influenced floor tiles and beige-dominated interiors. The 143-seat venue features an airy alfresco area as well as an air-conditioned indoor dining hall. 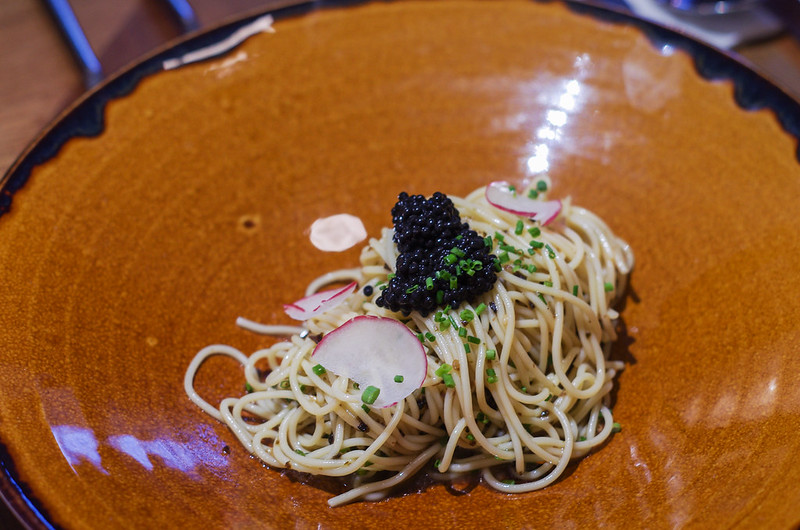 Our menu for dinner that evening read like a run through of Southern European cuisine. We started off with the Chilled Angel Hair Pasta which is available in their set lunch menus which start from a reasonable SGD 18++ per person. The pasta was topped with avruga caviar and kombu seawood and came lightly drizzled with truffle oil. It was a competent starter to satiate the palate, with the chewy and slightly thicker strands of pasta rendering Porta’s version slightly different from other angel hair pasta dishes I’ve tried. 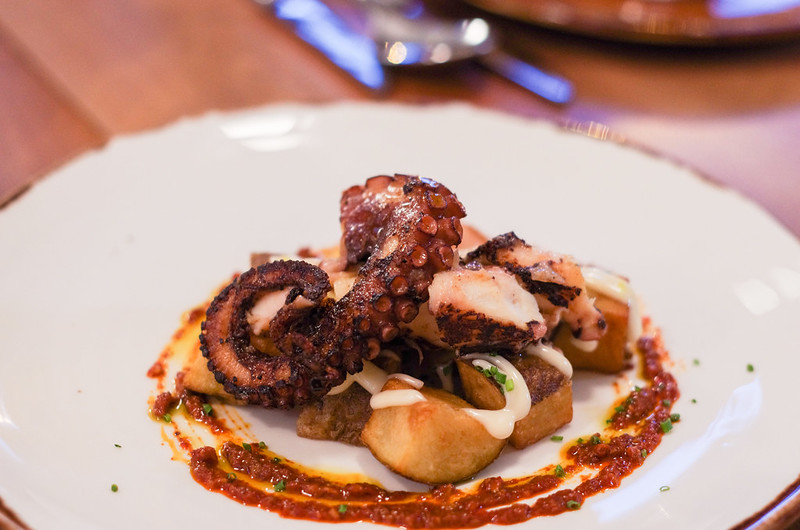 For starters, I would rather go for the Spanish Octopus ($18) which is available in the ala carte menu. Porta uses octopus from Ria de Arousa in Galicia, Spain. This variety also does well as tapas, but I digress. That being said, the Spanish sensibilities of the dish are not lost as the octopus came nicely grilled with a smoky flavor. The tangy patatas bravas (another common tapas dish) that came with it was also quite addictive. 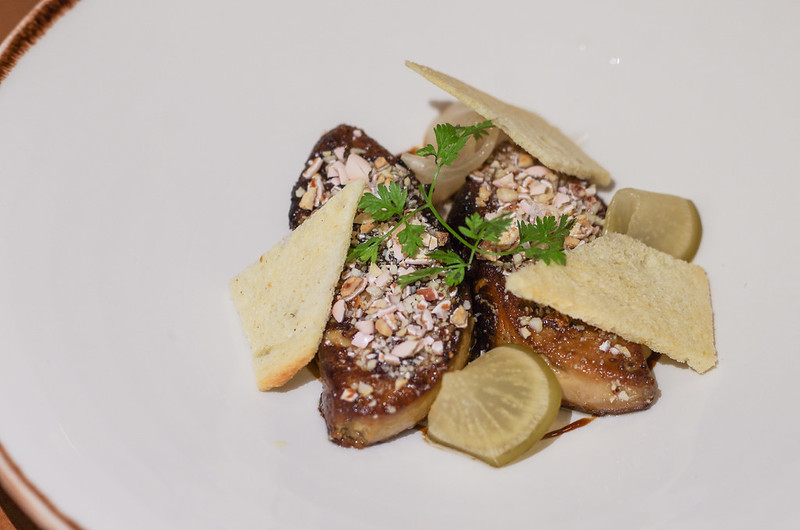 The Foie Gras ($24) was wonderfully tender within, as all good foie gras should be. However, what made Porta’s version stand out was the generous sprinkling of candied almonds on top which added a layer of complexity to the dish with the unexpected crunch (and sweetness!) that contrasted against the melt-in-your-mouth goodness of the duck liver. 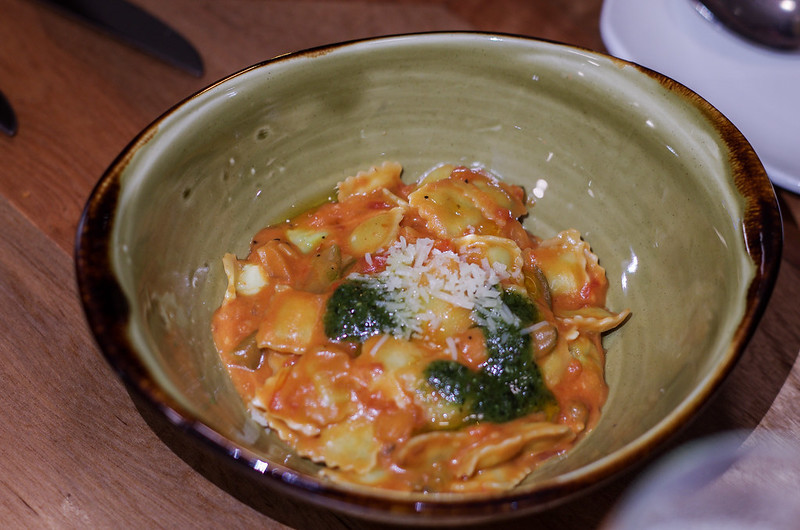 For cheese lovers out there, the Ravioles de Royans ($22) certainly doesn’t disappoint! At first glance, the dumplings look obviously smaller than your typical ravioli. There are two types of cheeses that go into the filling. Though I could not exactly make out the type, there seemed to be hint of cheddar in it. 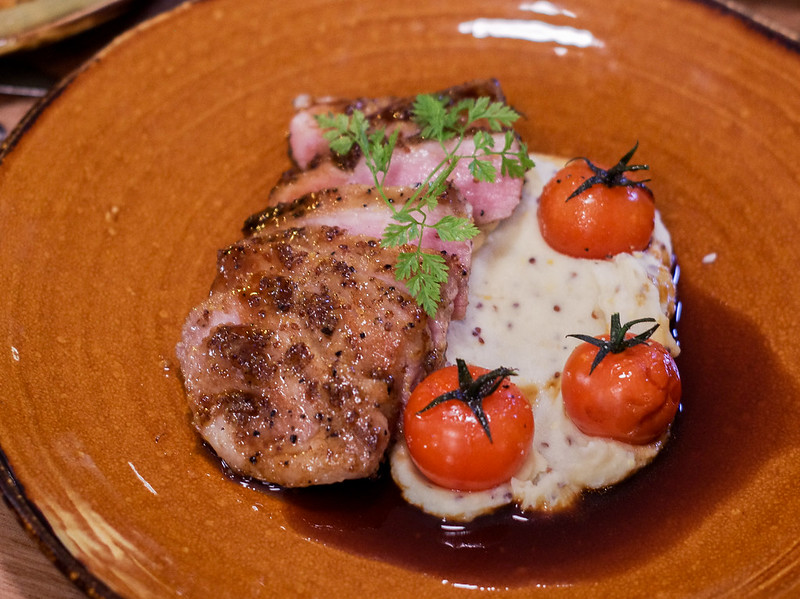 Though I loved most of the dishes I had that night, my favourite has got to be hands down, the Iberian Pork Secreto ($26). Using highly marbled pork shoulder blade, the meat is first sous-vide for four hours and then roasted. The result was an unbelievably luscious serving of meat, with a tenderness that will make you sincerely wonder how it could be achieved with pork. I will certainly be back for this! 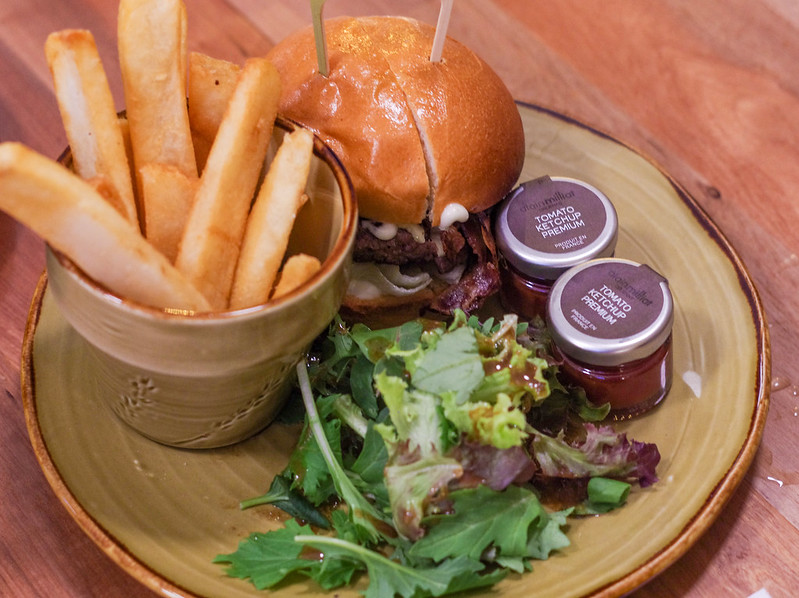 After the unforgettable Iberian Pork, the Porta Burger ($23) that followed almost got relegated to second billing. The high quality of the Stanbroke angus beef was evident the moment I bit into the juicy and thick patty. The taste was further enhanced by the sweetness of the caramelized onion, the aroma of cheddar and the added crunch brought about by pieces of bacon. The dish also came with fries as a side along with a bottle of Alain Milliat premium ketchup – the latter having a strong tomato/salsa flavor. 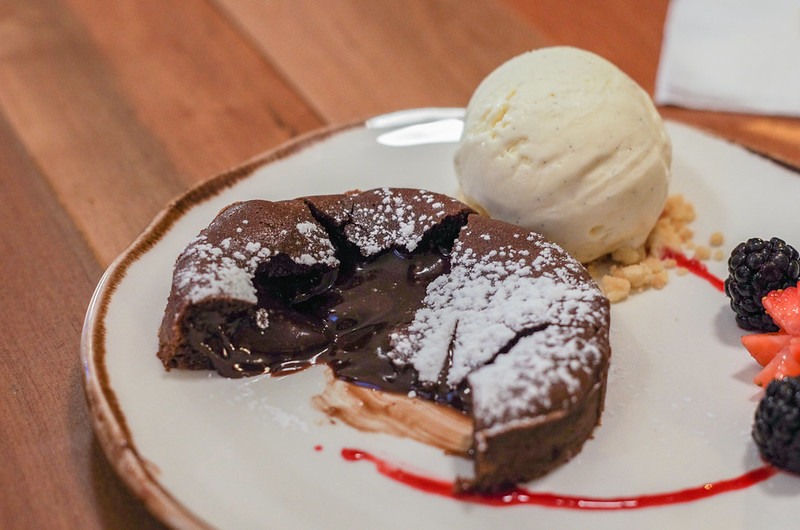 We finished the meal with two desserts. The first was Coconut Blancmange ($12) – a custard dessert which was again topped with crispy candied almond. This was followed by the Valrhona Chocolate Lava Cake ($14). While I am always partial to chocolate lava cake (one of my favourite desserts!), I thought the coconut blancmange was an interesting departure from the usual custard. The juxtaposition between the silky and creamy bottom and the crunchy crumbles provided for a nice ending to the meal.

A well-executed menu coupled with highly reasonable prices make Porta a compelling option for an upscale dinner that can impress without breaking the bank. I will surely be back.

I also mentioned earlier about Porta’s great value set lunch which starts at $18++. Here’s a look at that lunch menu – do note most of the dishes differ from the ala carte menu.

For Porta’s ala carte menu, you can check out this link. 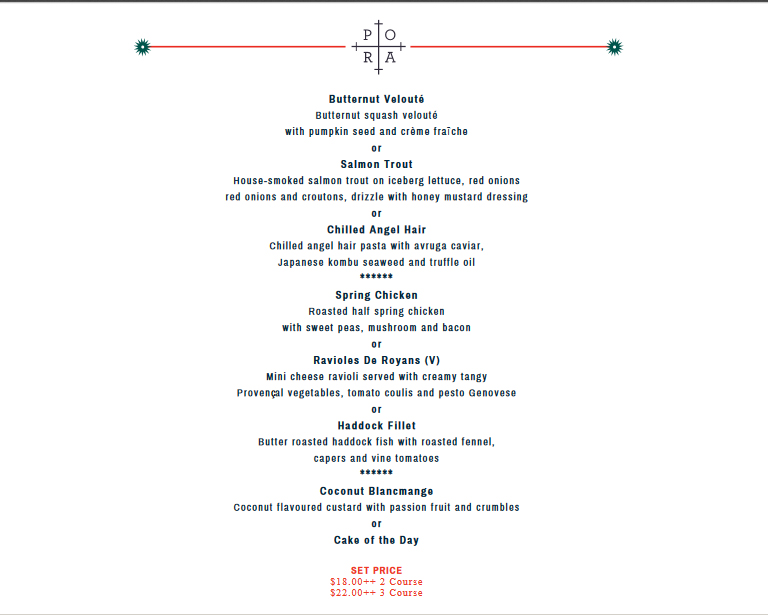