Park Hotel Clarke Quay opened slightly over a decade ago in the relatively upscale Robertson Quay area near the Singapore River. The 336-room property is situated just next to the new-ish Fort Canning MRT Station and boasts of fine views of the river leading to the CBD. During a recent weekend, I checked out the Park Hotel Clarke Quay.

Although the property has been around for just over 10 years (Park Hotel Clarke Quay opened in 2009), certain parts of the hotel underwent a refurbishment recently. Specifically, this included the lobby as well as the inhouse restaurant, which has been rebranded to Porta in 2016. I arrived in the lobby during a Saturday morning for check-in before there was any queue and was advised to head up to the Crystal Club for registration formalities. After getting my identification details, I was shown to my room in no time and given my keys to start my staycation. 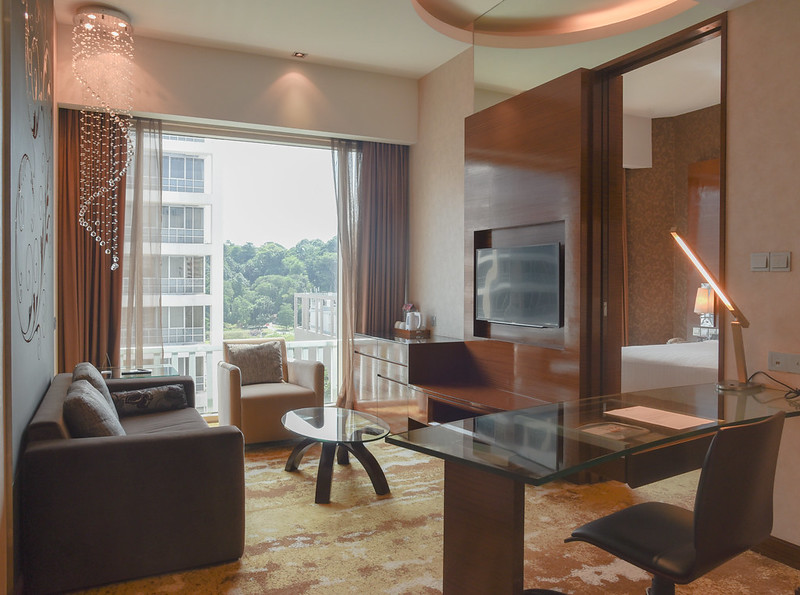 living area of the suite

For this particular occasion, I had stayed in a Park Suite. At 48 square meters, this is the highest category room in the hotel. It comes with two bathrooms, a separate living area and a luxurious tub. As with the other rooms, the tone here is dominated by lacquered wood furnishings contrasted with dark red. There is also a spiraling crystal chandelier in the living area plus a number of seating options including a sofa and two armchairs (one being inside the bedroom). 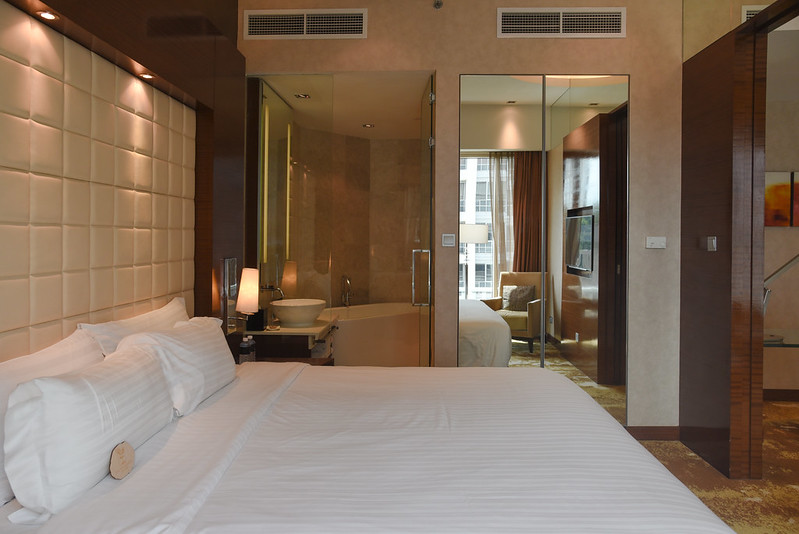 The bedroom itself is highly similar with the lead-in category rooms with the main difference being the working desk. This is situated in the living area instead. 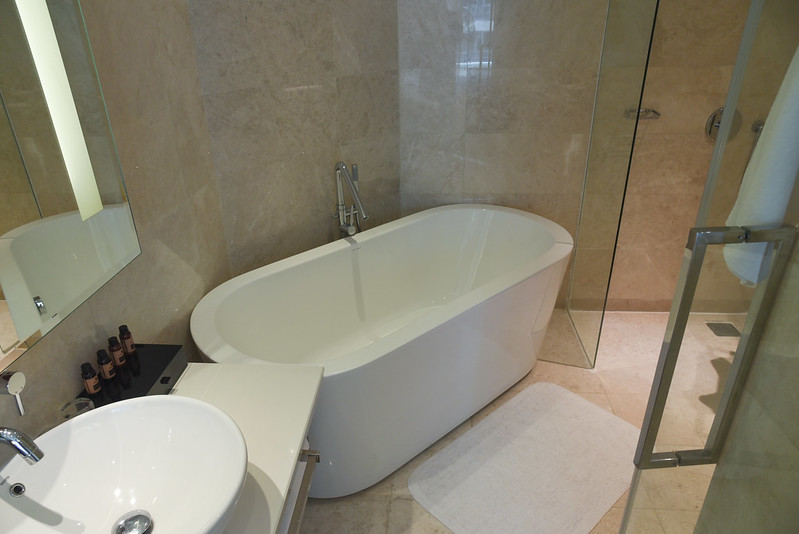 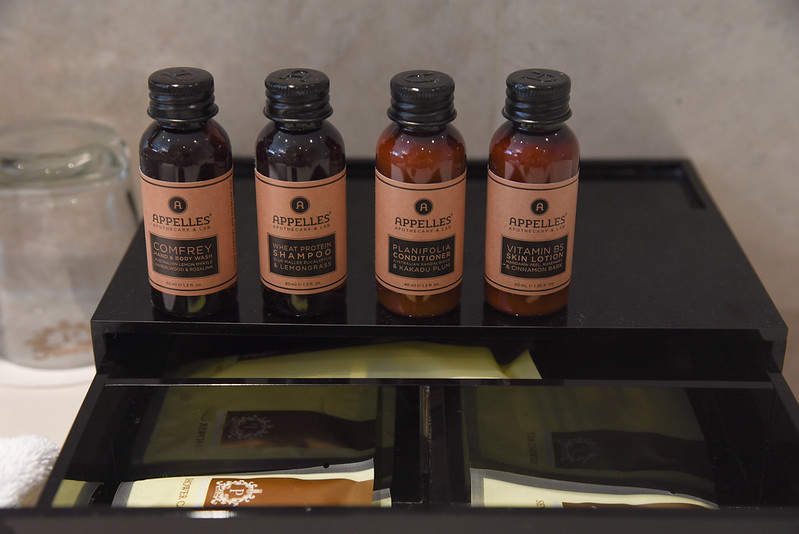 in room toiletries from appelles

Another feature is the bathtub which is available only in the suites. Due to the presence of two washrooms, the master bathroom is not particularly large but I thought the relatively spacious tub made it quite luxurious. Toiletries are from Appelles, a skincare brand from Australia. The complete set of toiletries was also provided, including razors – relieving me of any need to specially request for it. 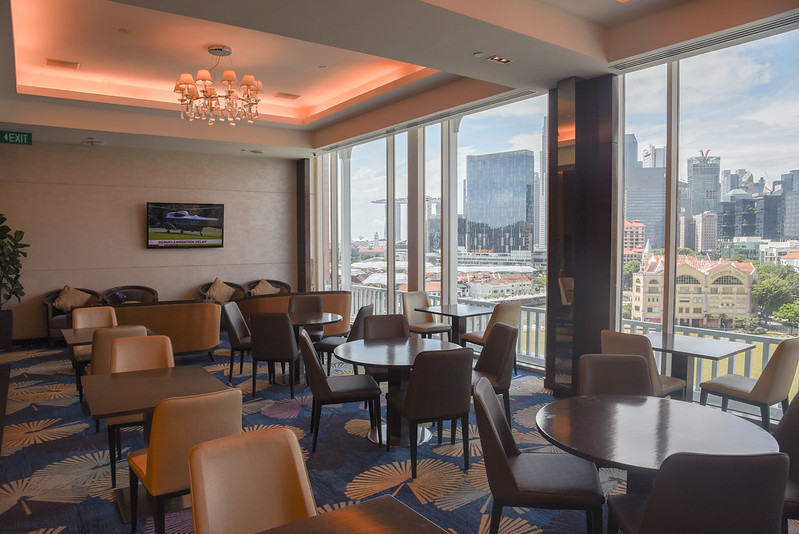 My stay came with access to the hotel’s club lounge, the Crystal Club. Situated at the topmost floor of the hotel (10th), it comes with sweeping views not just of Clarke Quay but there’s a partial view of the CBD as well. 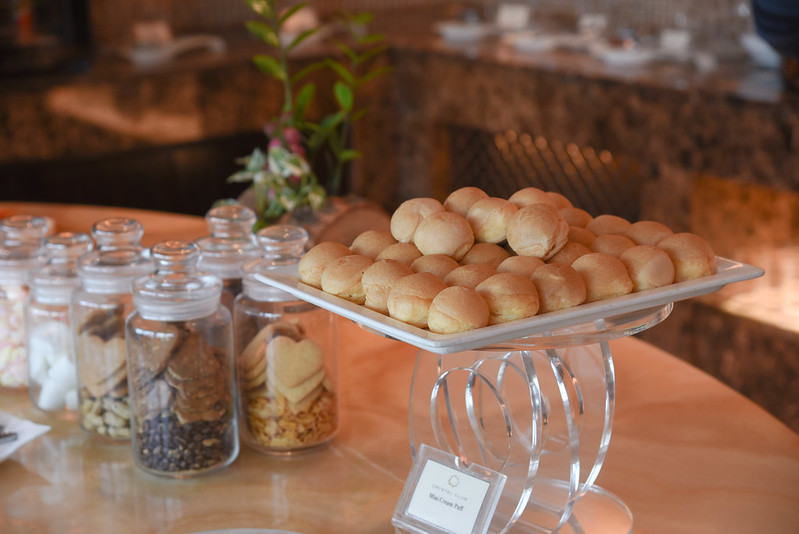 The club lounge has two meal services each day – breakfast and evening cocktails, the latter running from 5:30 to 7:30pm daily. Given the positioning and price point of the Park Hotel Clarke Quay, I was quite impressed with the lounge offerings here. I spotted around 3 hot dishes, 2 salads, a couple of cakes and fruits for desserts as well as a modest cheese platter. 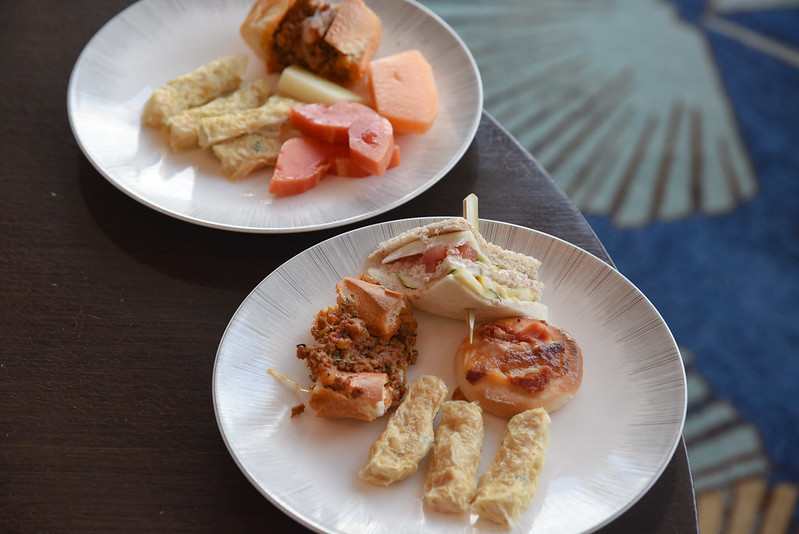 evening cocktails at the crystal club

There are only two staff members manning the lounge during evening cocktails but service was efficient. Drink orders are handled well although there may be not much time for chit-chat as with luxury hotels. 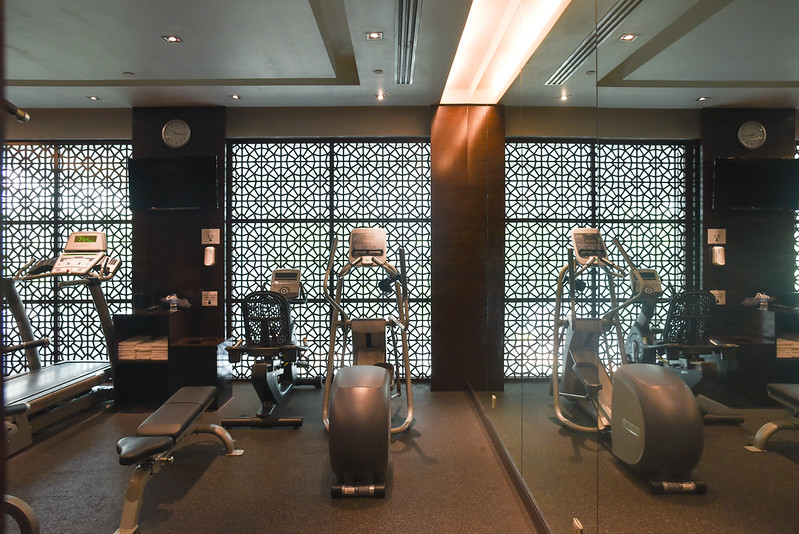 Apart from the club lounge, the hotel also has a swimming pool and a gym. The pool was mostly occupied during my visits there so I was not able to take photos. The fitness center was not used as much even though it carried quite a number of exercise equipment – sufficient for a workout while on holiday or business. 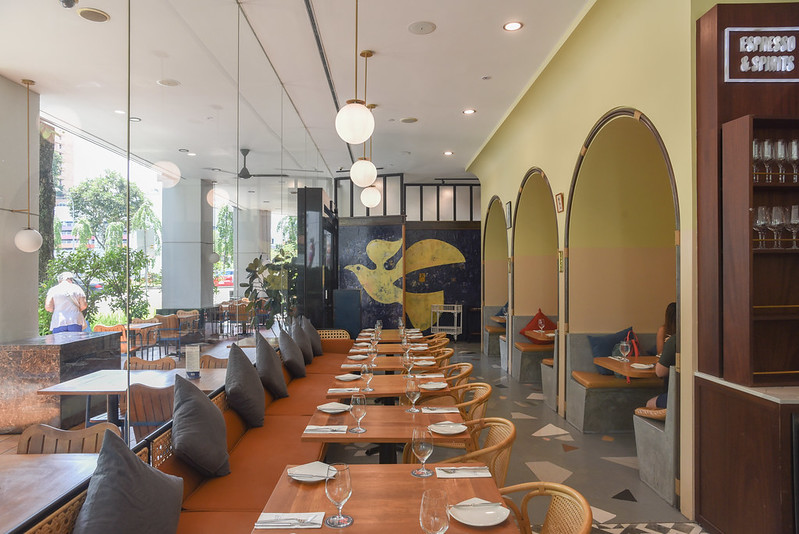 During my stay, I had the option of having breakfast at either the club lounge of at the inhouse restaurant, Porta. Past experience dictates having breakfast at the inhouse restaurant unless it gets full. Thankfully, the crowd was quite manageable at Porta despite it being a weekend. As I also loved the menu at Porta, I was curious how the food would fare during the morning meal. 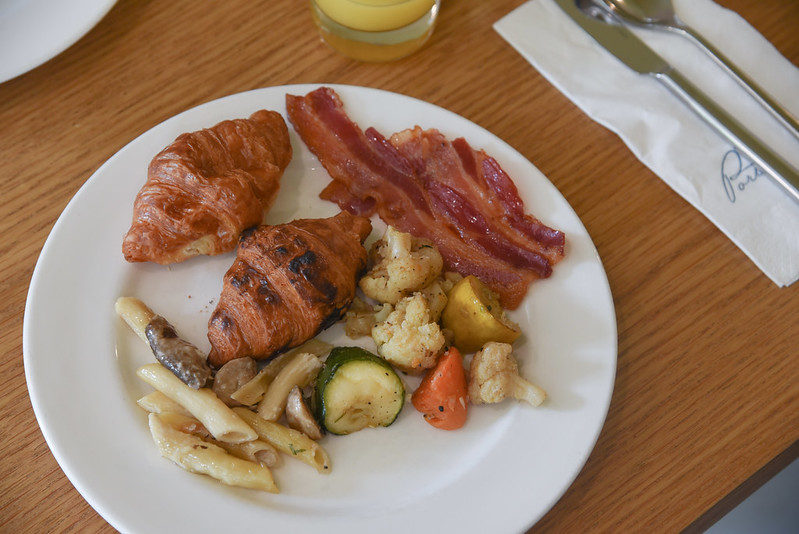 There is a distinct focus in Western flavors for breakfast at Park Hotel Clarke Quay. You will find the usual suspects – a pastry section, a variety of cold cuts, hot items such as baked potatoes and bacon and even an egg station. Conspicuously absent are local dishes such as bee hoon or nasi lemak — but this is in keeping with the theme of the venue.

While the Park Hotel Group has been around for over 50 years, its presence in Singapore has only really expanded fairly recently (prior to that, the group’s presence in Singapore was mostly through the more upscale “Grand Park” proposition). That being said, there is a deliberate Asian flair to the stay experience here and this also flows through via the enhanced lounge offerings. For a four-star proposition, the property offers value-for-money especially after considering what other hotels in the area are charging. For those visiting Singapore, staying in the Clarke Quay / Robertson Quay area offers a relatively more relaxing vibe and in that sense, the Park Hotel Clarke Quay offers the most bang for your buck.

Park Hotel Clarke Quay currently has a staycation offer that starts from only S$130 net and even comes with a S$10 dining voucher. The hotel is eligible for the SingapoRediscovers vouchers as well. Currently, there is a promotion on Klook where you get a S$50 voucher back when you book a staycation using at least S$50 of the SingapoRediscovers vouchers. You can book this special offer here.