Wouldn’t it be nice to get more than just a standard, box-like hotel room sometimes? More often than not, the overall experience from a stay depends not on the hotel brand but on the type of room one gets to stay in. With increasing competition in the hospitality industry, many hotels are now happy to throw in a better room than the one stated in your hotel reservation so it’s actually not a top secret thing to get an upgraded room or suite. If you want to increase your chances, here are some top tips on scoring a free hotel room upgrade on your next stay. 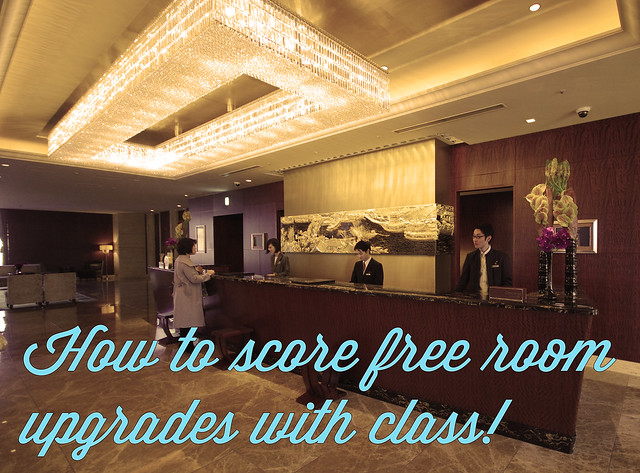 To qualify for the highest tier, a minimum stay in the region of 60 nights a year in a particular hotel chain is usually required. However, there are other ways around this, often through credit card promotions, or deals by the hotel chains themselves. Some of those looking to get your business may also be willing to match an elite status gained from another hotel chain. You can check out this website that shows updates for status matching.

One is less likely to get an upgraded room by coming in at the earliest check-in times of 2PM to 3PM. Wait for most people to check-in first. By late afternoon or early evening, the hotel would have formed a better idea of the occupancy for the day and would know which additional rooms they can release for occupancy. Also, there’s a higher chance that the standard rooms would have already been taken up earlier on, leaving more of the premium rooms unallocated.

3. Staying during peak season can work in your favor

Peak season, whether it be due to a holiday or a conference, can be a great time in scoring a room upgrade. This works more effectively when used in conjunction with #2. Peak times in hotels often coincide with large delegations of people staying for a seminar or packaged tours. These people often stay in homogenous rooms (i.e. the standard rooms), making it more likely that the front desk will have to put you up to the next best room

4. Let the hotel staff know of your request during check-in and not beforehand

Once, I had checked in to a hotel during new year’s eve. As I wanted a better view of the fireworks display, I requested for a room with a view of the fireworks. Without expecting it, I was upgraded two notches to a larger room in the hotel’s new wing – and I was able to enjoy a spectacular view of the fireworks that night! While the idea of letting the staff know of any special request only at check-in can be risky, making special requests beforehand can also mean that the hotel is likely to assign your room well in advance. If you make your requests during check-in, there is a higher chance that you’ll get upgraded as there will be a smaller pool of rooms to search from that meets your needs.

Sometimes, the best way to get an upgrade – even without asking for it – is through plain old-fashioned courtesy. For most hotels, it usually doesn’t matter financially whether you’re given a better room or not as these as sunk costs to them. If the front desk is feeling great speaking to you that day, who knows, that might lead to a decent upgrade.

6. Ask for it… discreetly

This may not be such a bad idea. Most front desk staff would have already experienced various approaches by guests that sometimes, asking directly may prove to be a refreshing change to these folks. Just make sure you don’t have other guests within earshot who can potentially hear what you’re trying to do!

7. Book for a mid-priced room

Many hotels use the words deluxe, superior and standard to distinguish what seem to be imperceptible nuances. For most room upgrades to matter, try booking for the second cheapest room type rather than the cheapest one available. It also gives the front desk a better justification to upgrade you rather than the next guy.

8. Short-stayers have a better chance of getting it

Those on short-stays (i..e 1 to 2 nights) are more likely to get a room upgrade than long-stayers. From a business perspective, it’s easier for the hotel to sell the room at a higher price later on than if the same room is blocked for several days by a guest who is only paying for a much cheaper room.

Have you received a hotel room upgrade before? What was your experience like?