Often cited for having the best value luxury hotels, Kuala Lumpur in Malaysia is a delight for frequent travelers and luxury vacationers. This is the city where a 5-star hotel room can go for just US$100 a night. If you’re racking up points to reach elite status in a loyalty program or simply wishing to bask in opulence and luxury without breaking the bank, Kuala Lumpur is a great city to do so. 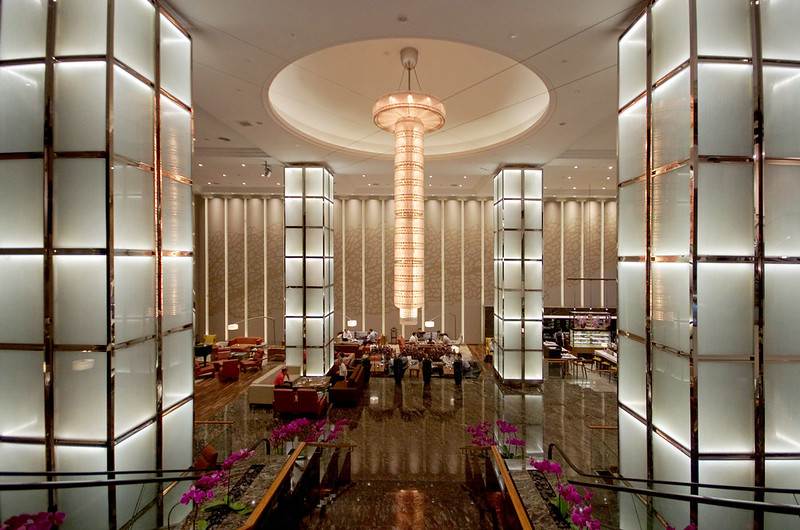 During a short trip to Kuala Lumpur, I stayed at Hilton Kuala Lumpur – a fine example of these great value luxury hotels that I mentioned earlier. Located at KL Sentral, it is also very conveniently located especially if coming from Kuala Lumpur International Airport. The city is well-known for its traffic jams, especially if you’re staying in one of the hotels around the city center. The hotel’s strategic location just next to the KL Sentral station, where fast trains from the airport stop, allows guests to avoid that hassle altogether. It’s only around 30 minutes from the airport. Many tourist attractions such as the old parliament building, lake gardens and colonial-era railway station are also close by. 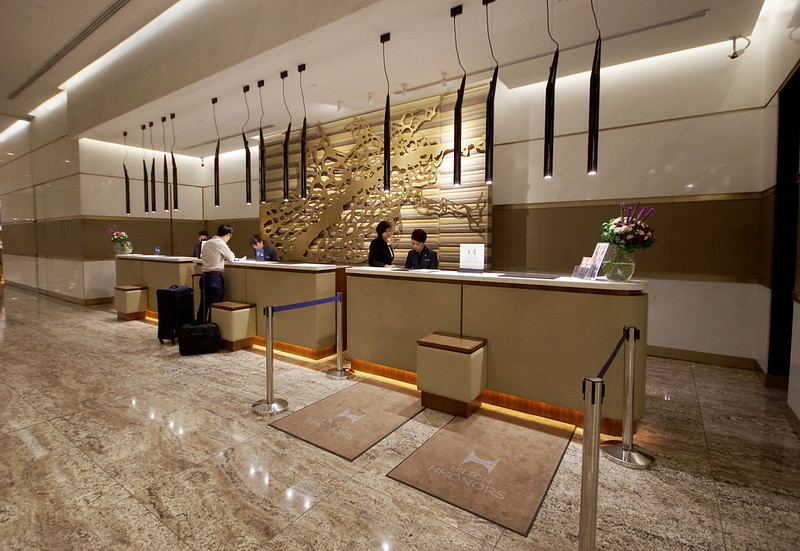 I had perhaps what was the quickest check-in experience ever at this property. After entering the hotel’s doors, I was immediately greeted by the hotel’s guest relations manager and whisked to my 19th floor room. The actual check-in procedure was done in-room, with the usual signatures and collection of deposit. All that took about 10 minutes. 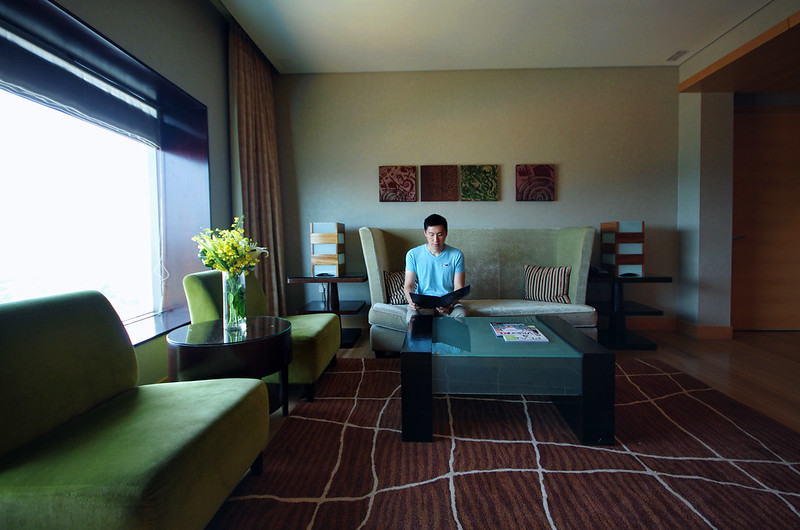 My in-room check-in went by so fast that I didn’t have time to observe my room until I had properly settled in. My room at Hilton Kuala Lumpur was a Grand Executive Suite, an 86 square meter space that was all mine at least for 2 nights. It was a modern and well-appointed affair. I could best describe the interiors as contemporary, one that can withstand the test of time with its brown hues and lack of any garish elements. 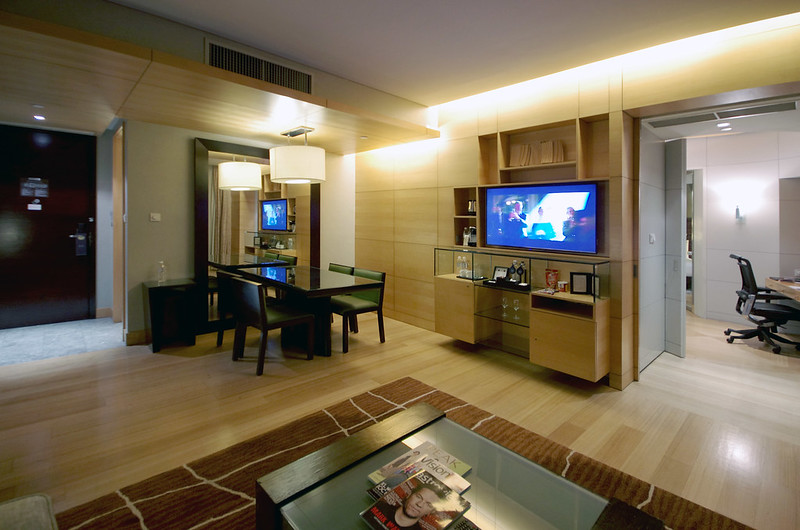 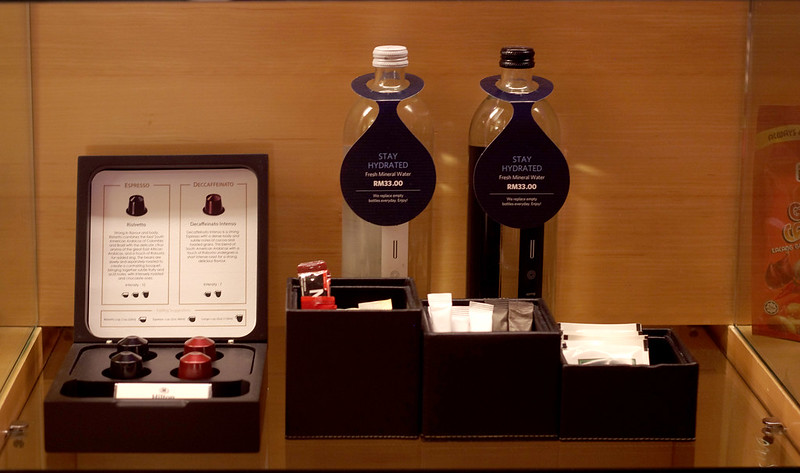 The suite was actually divided into two parts. First was the living and dining area which had a provision for a powder room. My eyes were drawn immediately to the minibar which was filled with all sorts of snacks and beverages. Of particular note was the Nespresso machine and complimentary coffee capsules that came with this room category. 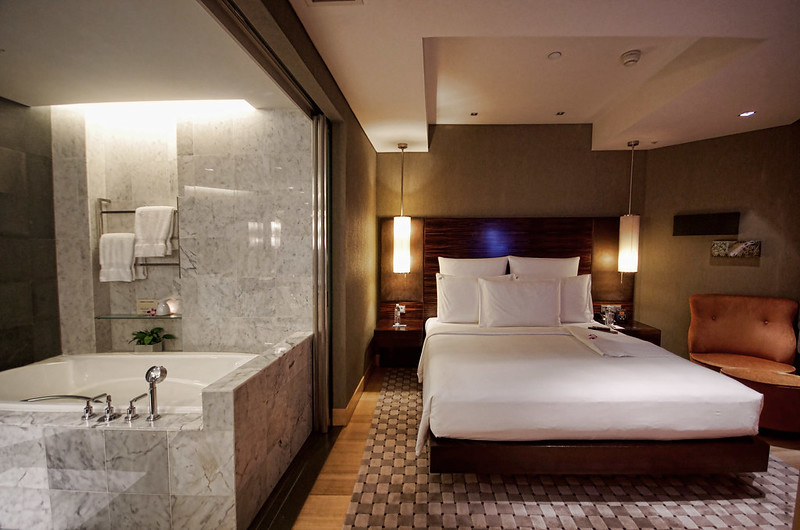 While the living and dining area could be described as plush, the highlight of the Grand Executive Suite was perhaps the bedroom. Its layout made it exceptional in my eyes, with a bathroom that did not settle with the transparent concept that’s in vogue these days but went all the way by being fully open. 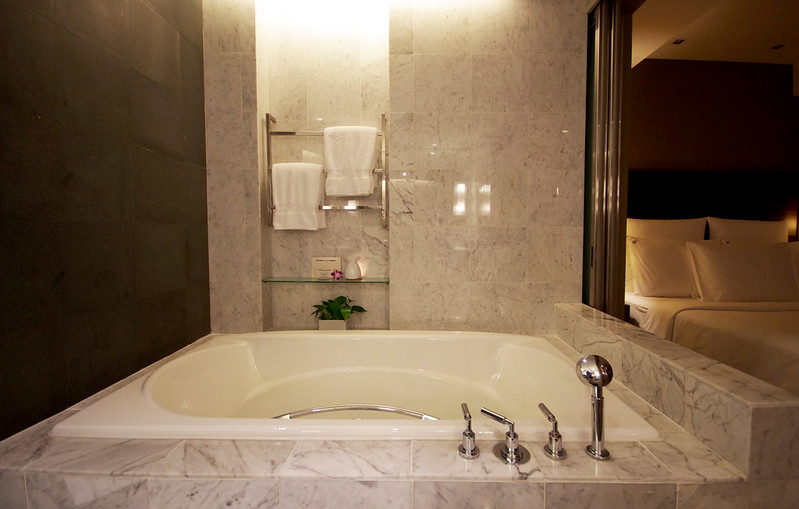 The open concept allowed the bedroom to look larger as it integrated well with the bathroom. For those seeking privacy, sliding panels allowed for a bed and bath separation. 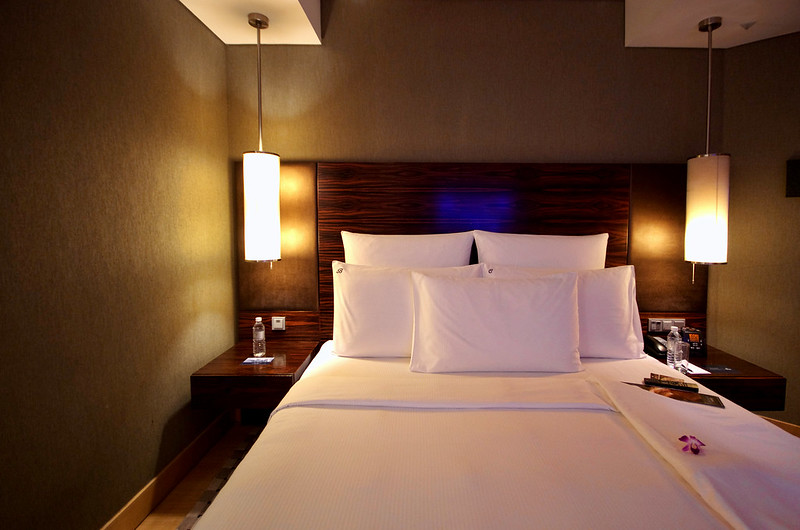 I found the beddings immaculately set on the bed. Not a single wrinkle could be seen. In fact, the whole scene looked a bit like a promo picture that hotels publicize in booking websites. Yes, the sheets were that fine that it was almost a shame to sleep on the bed! I later scrutinized the bed during my second night just to see if it was a stunt to impress first-timers but found the bedsheets again changed without a single wrinkle. If it’s any indication of the quality of housekeeping staff at this hotel, I would rate Hilton Kuala Lumpur’s housekeeping team to be the most detail-oriented that I have come across so far. 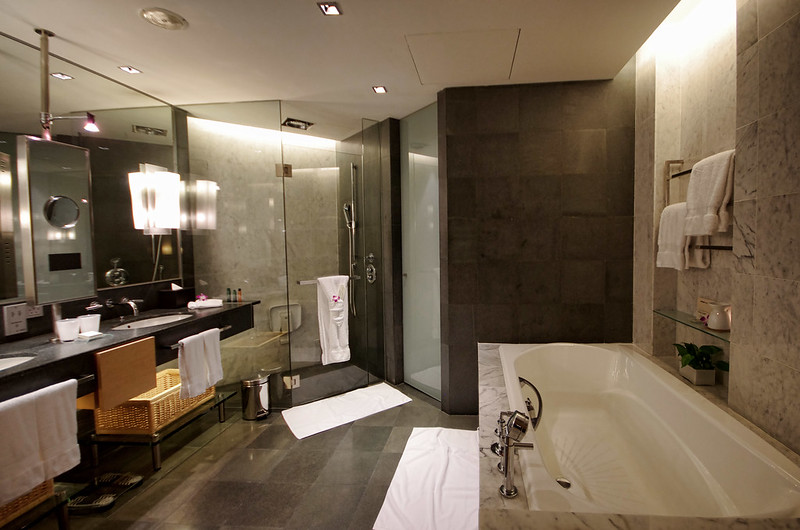 The bathroom was quite impressive even when taken in isolation from the bedroom. Dominated in marble, it had a separate stall for showers and another one for the toilet, which by the way was the Japanese type with heated seats and bidet. 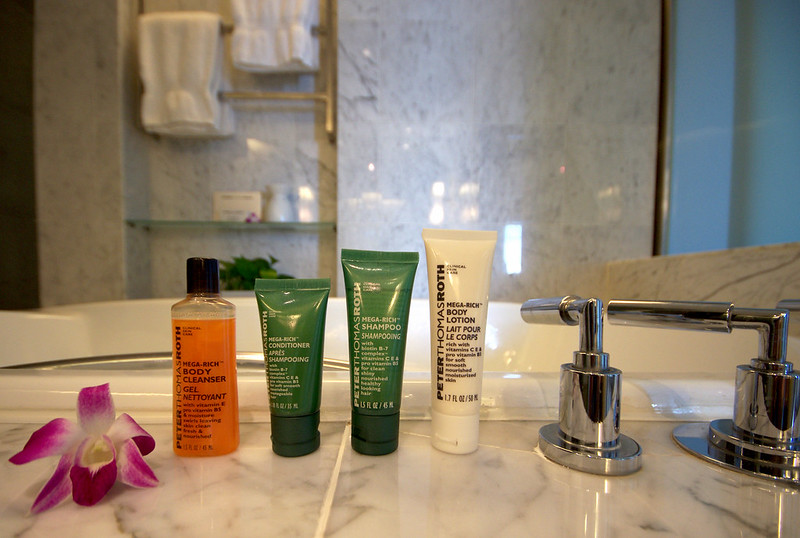 Toiletries were provided generously and came from Peter Thomas Roth, an ubiquity in Hilton hotels all over the world. 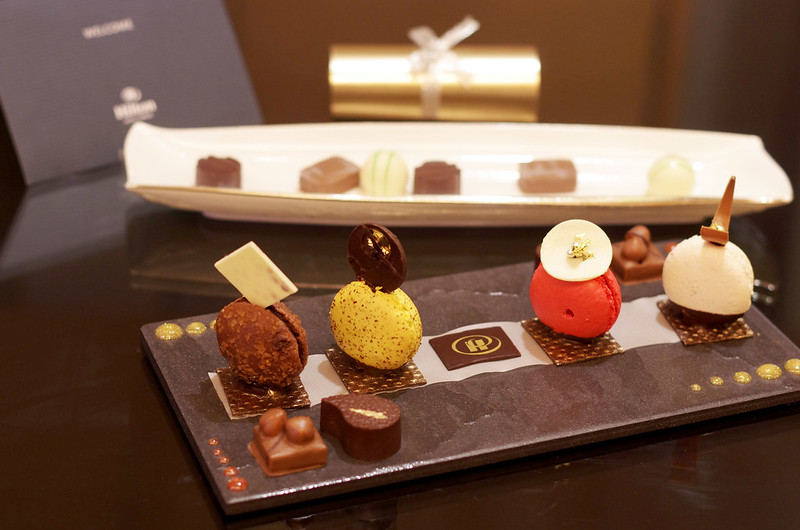 A few minutes after I had settled in to my room, I heard a knock on the door. What greeted me when I answered the door were some impeccable macarons and chocolates. I normally expect fruit bowls in the room but coming from a person with a sweet tooth, I’m slightly inclined to sweet endings, or in this case, sweet beginnings. 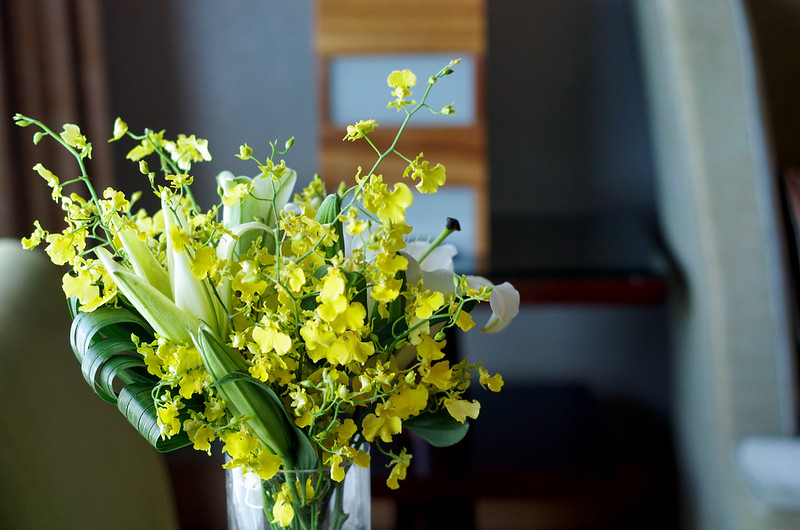 Later that night, I was running out of battery for one of my old (read: antique) Nokia phones. This was already my third hotel during my Malaysia trip and the previous two didn’t have any chargers to lend me. This was easily resolved at the Hilton. A quick call to their service center revealed that they indeed had a charger for my antique phone. Within a few minutes, someone was sent to my room to collect my phone for charging. 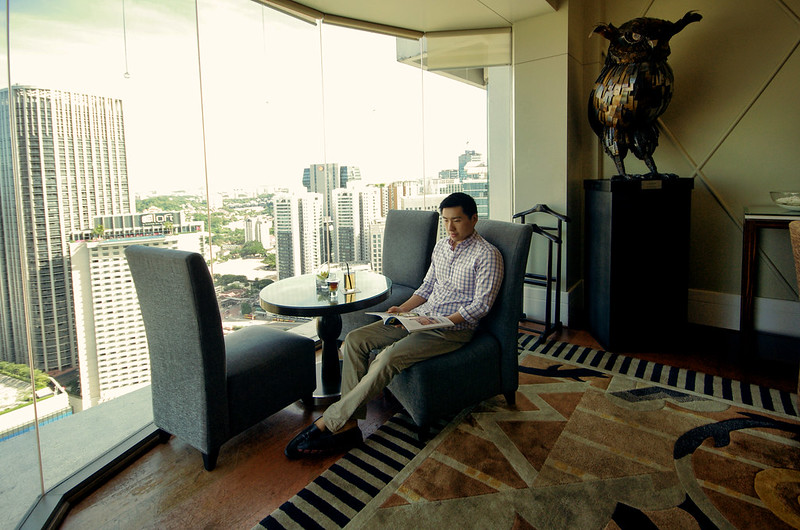 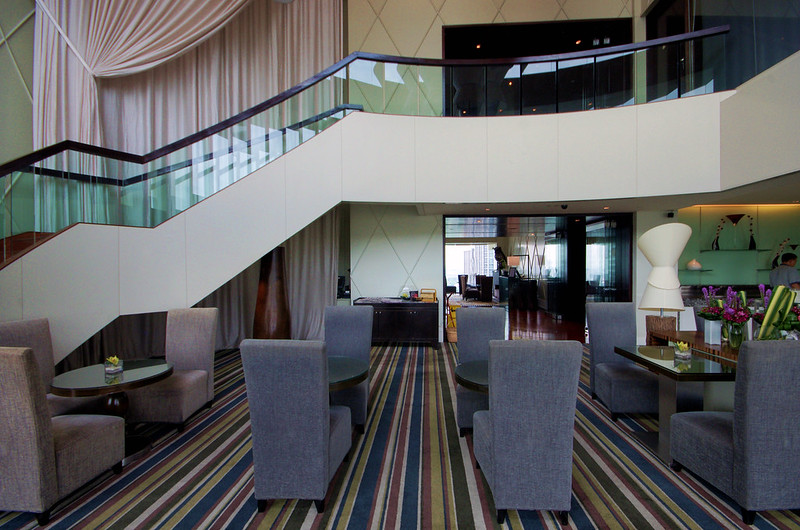 The two-story high main hall was where they display the buffet spread for breakfast, afternoon tea and evening cocktails. I also found some computers and printers which were free for guest use at the far end of the room. While in any hotel it is often recommended to have breakfast at the all-day dining restaurant than at the lounge, I chose to have my breakfast here during the first day and found a curated selection of fresh and hot items on offer. The hot items leaned toward Malay cuisine while the fresh items were mostly Western. 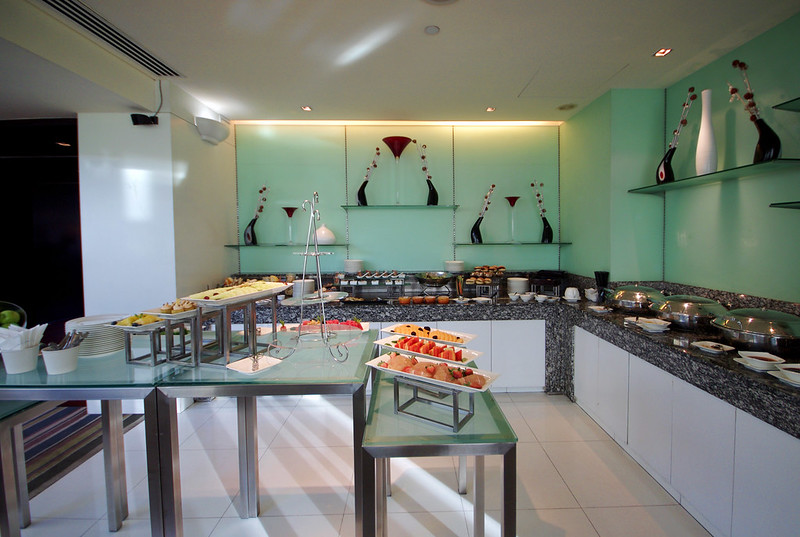 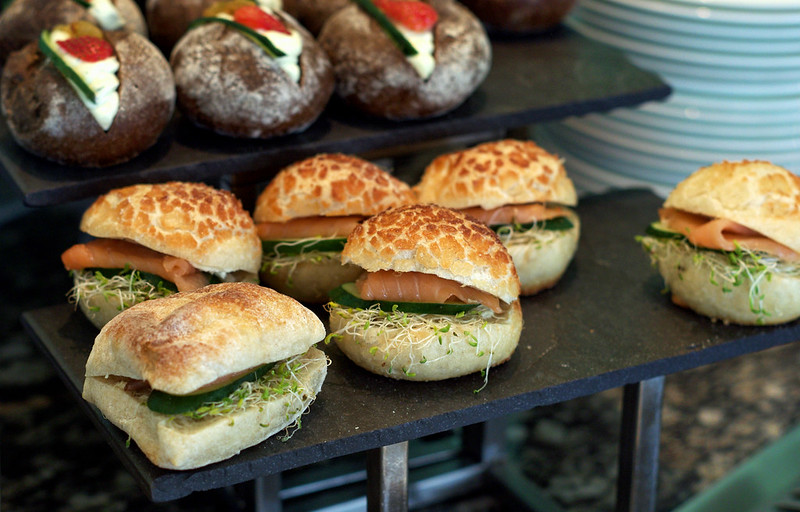 I also dropped by the executive lounge during evening cocktails and found not only canapes but a decent selection of hot items. Actually, the buffet spread during cocktails was strong enough that it made for a decent alternative to having dinner outside if time was of the essence. 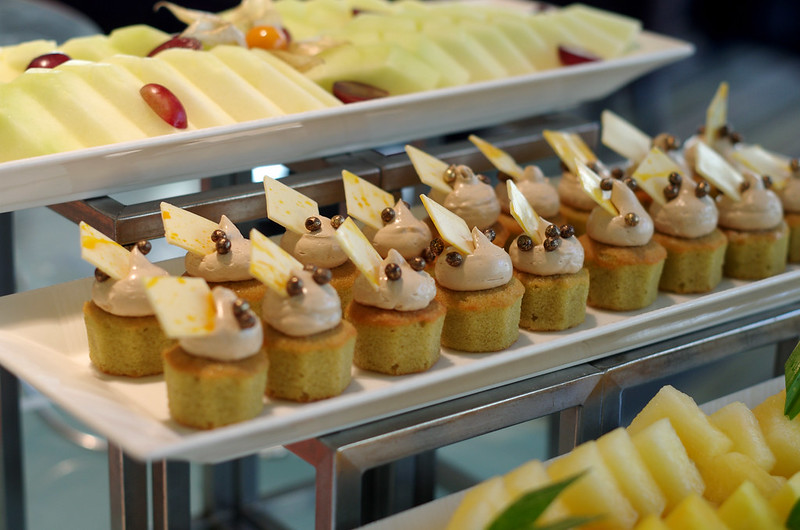 Apart from being just a hotel, Hilton Kuala Lumpur is likewise known for its restaurants. I could count no less than nine bars and restaurants within the hotel’s premises. Take out the customary lobby and pool lounges and there are still seven left. During my stay there, I observed that most of these restaurants were filled to the brim for both lunch and dinner. I got to try some of these restaurants – namely Iketeru, Chynna and Graze, during my stay there and will be posting about them in separate entries. 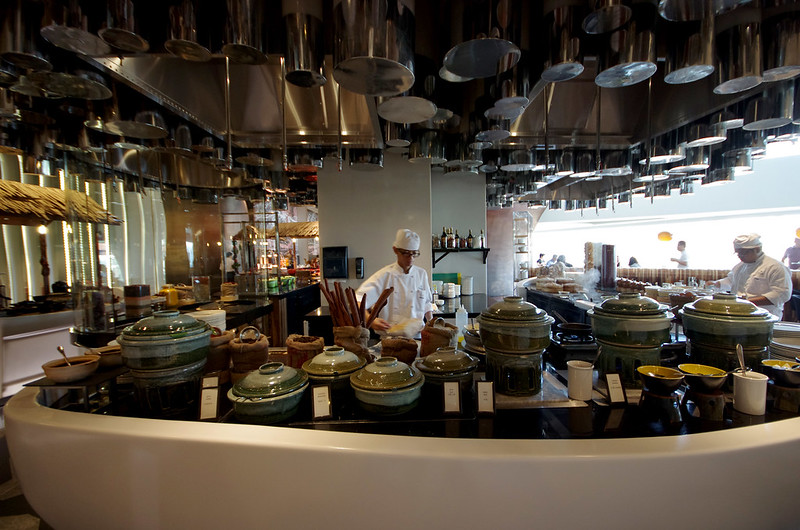 For my second day, I had breakfast at Vasco’s, the hotel’s all-day dining restaurant. The breakfast spread consisted of a wide array of dishes that included Malay, Chinese, Japanese, Indian and Western. I won’t detail all the standard breakfast offerings because Vasco’s definitely had those – sausages, bacon (beef), fresh fruits and the like. 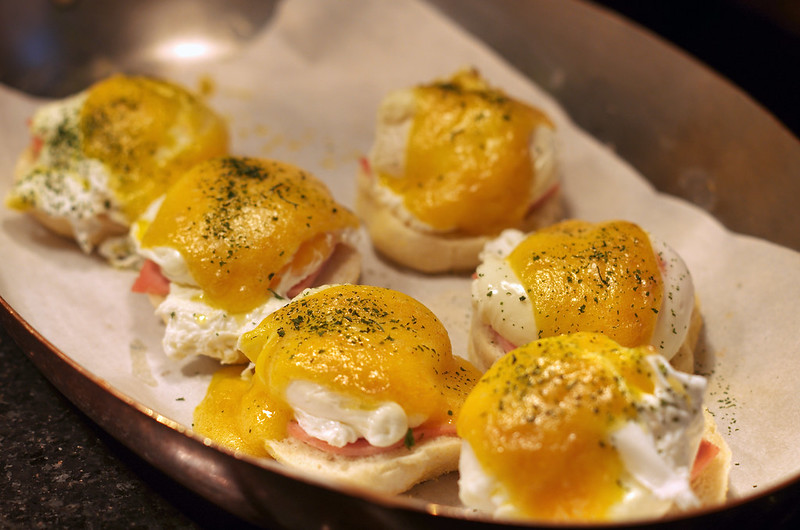 I spotted a couple of interesting items at the buffet spread. Of particular note was the eggs benedict, typically an off-menu item, if at all. Vasco’s delivered those in droves and I gladly obliged. 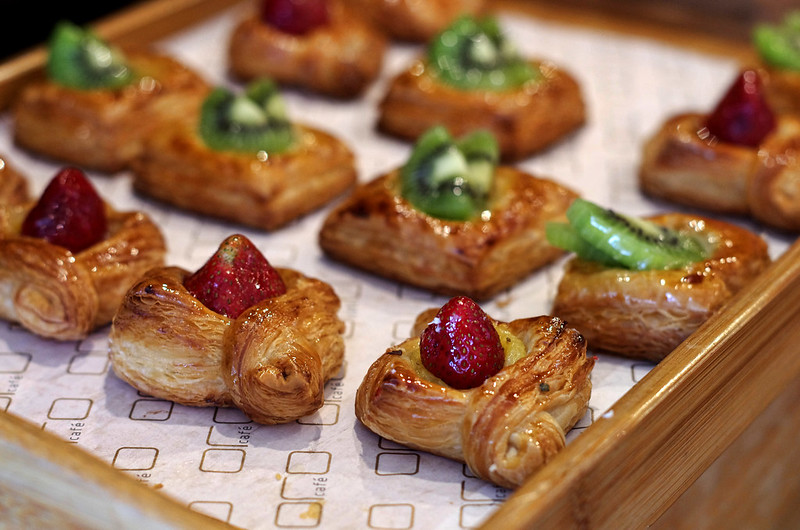 Of all, my favorite was the cereal and yoghurt section where I found Greek yoghurt – a rarity in hotel breakfast buffets. This, coupled with the raw honey coming from the honeycomb, reeked not only of quality ingredients but also of wholesomeness. For health buffs, there was also fresh juice and smoothies on offer. At first, I was a bit dismayed when I found only canned juices. It was only later that I realized all the good stuff were at the back, like a maze with goodies waiting at the end. 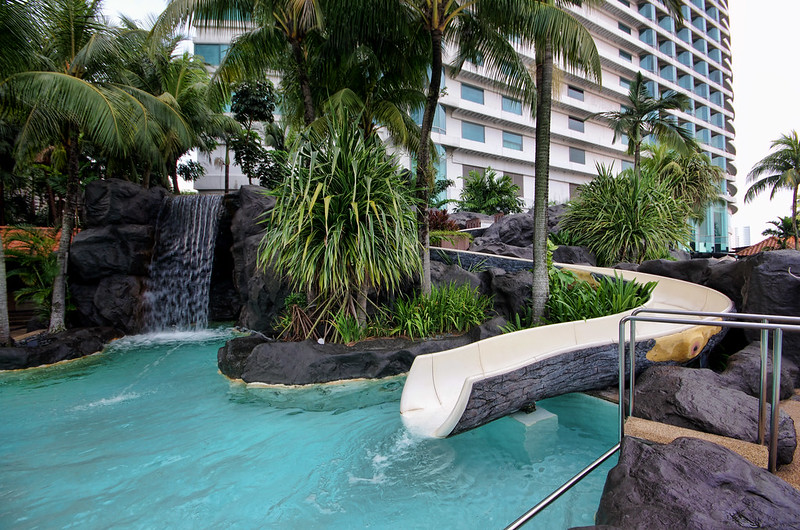 Those coming to this hotel for staycations won’t be disappointed. As Hilton Kuala Lumpur is integrated with Le Meridien Kuala Lumpur, this means that many of the facilities here are at least double the size of those found in other hotels. To start off,the swimming pool here was probably the most expansive among those I’ve seen in any city hotel. Those coming with kids will be pleased to find a tall pool slide for a fun swimming experience. I wanted to try it during my stay but just didn’t have the time! 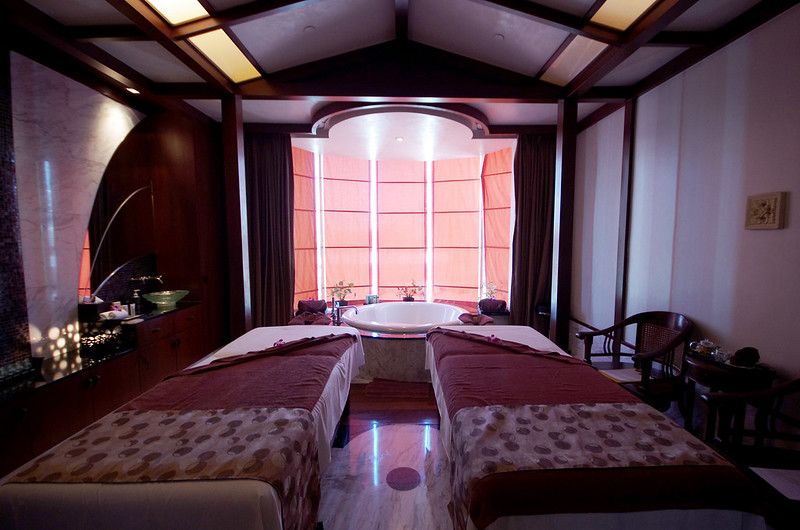 The hotel also had an excellent gym and while it wasn’t particularly huge, it’s above-average in terms of size when compared to other hotels of the same class. The gym’s integrated with the spa, which has won some awards the past few years. I had a go at their massage for men + scrub which lasted for 90 minutes. It was my first time to undergo a body scrub in my entire life. The treatment essentially entailed a scrub using sea salt from head to toe which lasted for about 30 minutes followed by a shower in between before the actual massage which lasted for 60 minutes. I found the massage extremely soothing and I could not help but drift in and out of slumber during that one hour I was there. After a vigorous cleansing scrub, it was definitely needed to soothe some tense muscles.
Verdict

I’m deeply impressed with Hilton Kuala Lumpur. This property seems to get it all right. Service was topnotch and if there’s one thing that will always stay with me regarding this hotel, it would be that keen attention to detail and the genuine desire to serve. This was my first stay at a Hilton property. If all Hilton properties are like this, I’d definitely put my Hilton HHonors Gold to good use.

It’s also a definite plus that this property has prominent and strong F&B offerings. Iketeru was outstanding and my experience there deserves another post. But other than that, the breakfast offerings here were also fantastic with several noteworthy dishes on offer.

What is perhaps most astounding is that for all these, Hilton Kuala Lumpur is priced very decently. A quick check for rates at a random weekend in August reveal prices of just US$100 inclusive of tax for an ordinary double room and slightly above US$230 for the Grand Executive Suite! This is certainly a good deal – even by Kuala Lumpur’s standards. It is probably the cheapest 5-star chain hotel in the city. With quick connections to the airport, it certainly makes a compelling case for a seamless short trip. For Singaporeans, this could mean an SG$80 roundtrip flight to KL followed by a SG$136 double room at the Hilton which works out to only about SG$216. That’s not even close to what 4-star hotels in Singapore offer these days.

You can read more of my hotel reviews here.