This review of the Four Seasons Singapore is the result of a few years of anticipation. With a highly convenient Orchard location mere minutes from the MRT station, this is a luxury hotel that I have visited several times prior to staying here. The property boasts of a Michelin restaurant in its premises – Jiang Nan Chun – known for its excellent roast duck. The spa is also notable and is among the best I have tried in Singapore. That being said, the Four Seasons has remained relatively understated despite the few decades it has stood in this address. Many of the reviews I have read from those who have stayed are exceedingly positive which begs the question why it has remained understated all these years.

Entering the Four Seasons Singapore, one would not immediately imagine being so close to Singapore’s main shopping belt. It’s quiet. I have never seen any crowds congregating by the lobby in the many times I have been there. This is despite the hotel being connected to a shopping mall. The lights are dim – highlighting the hotel’s understated qualities. 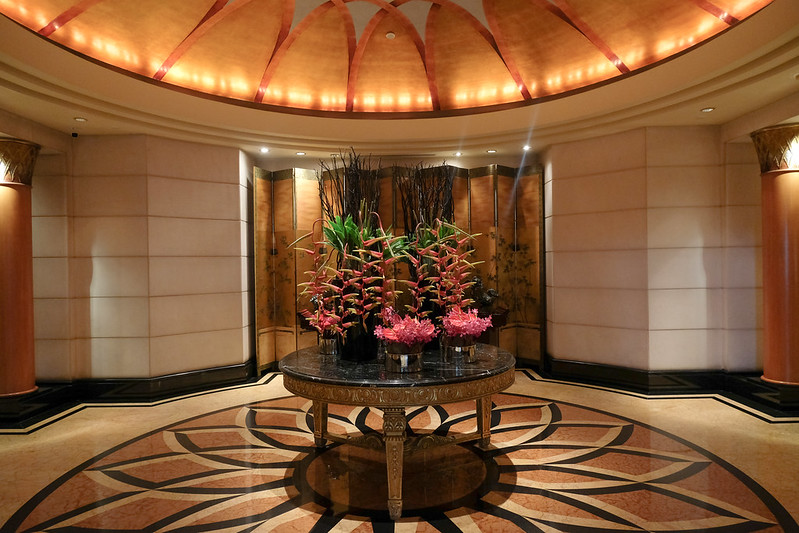 The hotel underwent a refurbishment a few years ago but it covered only the rooms. The lobby still retains a similar look as to when the Four Seasons Singapore first opened in 1994. By current standards, it seemed rather dated.

I booked my staycation at the Four Seasons Singapore with HoteLux which meant that it immediately came with a host of benefits. Upon check-in, the receptionist handed me a piece of paper summarizing all of these. It included:

With the room upgrade benefit, I was informed that I was upgraded to a Boulevard Room from the original Deluxe Room that I booked – with the Boulevard Room offering a better view of Orchard Boulevard. Other than that, the layout and room size are the same. 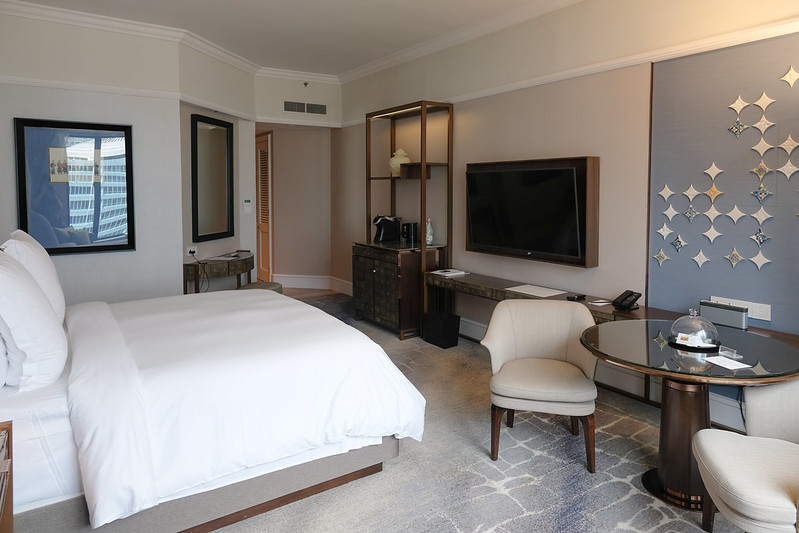 Despite the “soft” nature of the upgrade, I was only slightly disappointed with merely getting an enhanced version of Four Season Singapore’s entry-level room. As a consolation, the room size is still above average. At 49 square meters, it is one of the largest base-level hotel rooms in Singapore – bested by just a few other properties like Shangri-la Singapore’s Valley Wing and Ritz Carlton Millenia Singapore.

As mentioned earlier, the rooms were refurbished recently. The current look is mostly European in style with hints of Asian influences here and there. There was plenty of layering done on the walls – lots of beams and skirting – that were decked in beige, gray and white. The furnishings were dominated by marble surfaces, with wooden accents to create a sense of warmth. 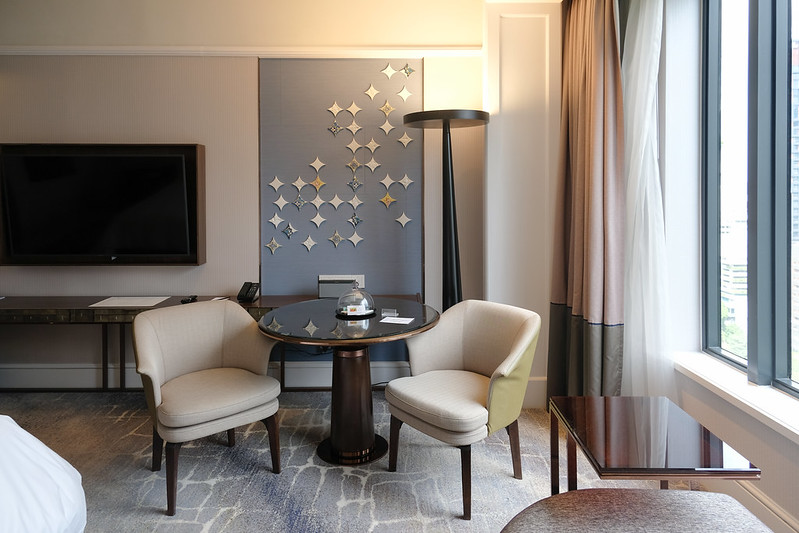 peranakan accents on the wall at the four seasons singapore

The room is large enough to have a space for a relatively large sofa/daybed and even a small round dining table. There is also a long but rather narrow desk just below the TV with a small set of Bose speakers tucked away in a corner. If you are intending to do some work, the dining table is more apt to get things done as I found the long desk too narrow and its proximity to the TV was quite distracting. 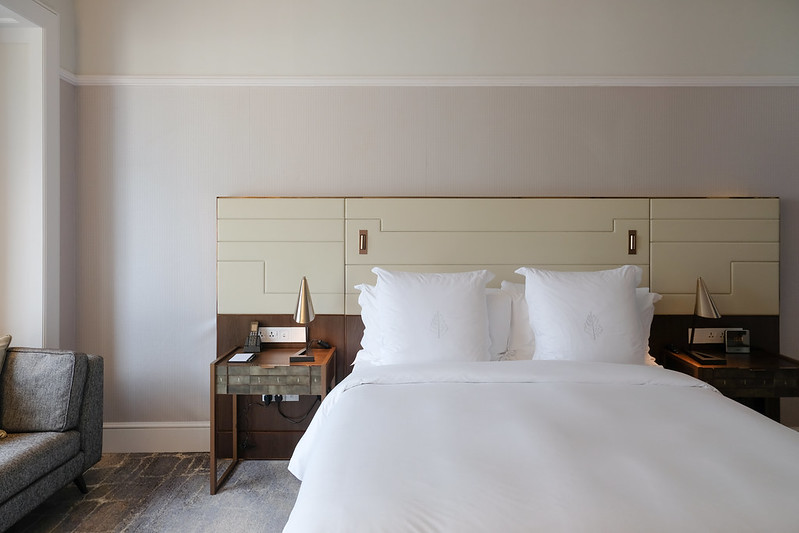 The highlight of the room has got to be beds. I have to say the beds at Four Seasons Singapore are among the most comfortable that I have ever encountered – extremely fluffy just the way I like it. Apparently, the mattresses used by Four Seasons come from Simmons. I also enjoyed the large square pillows immensely. Even though the pillows were quite soft, my bed came with 6 pillows which was more than enough for a comfortable sleep. 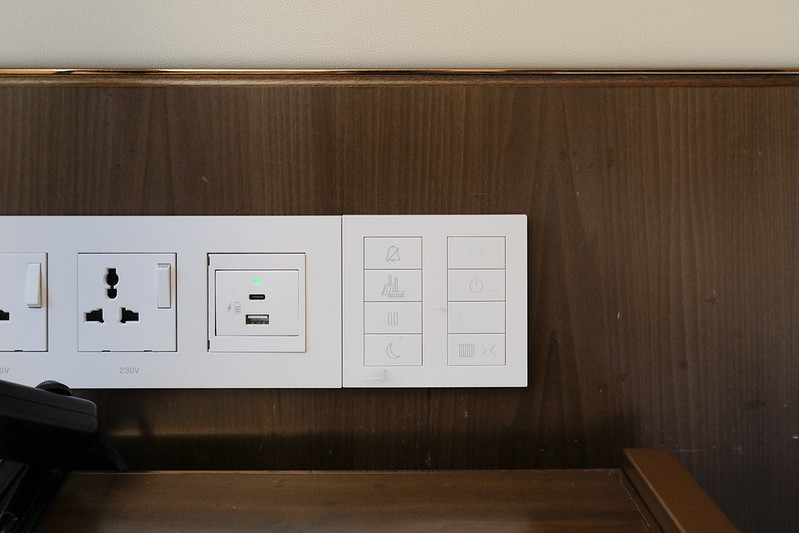 remote for the light and curtains

A remote by the bedside and also on the wall near the foyer contained controls for the lights as well as the curtains. 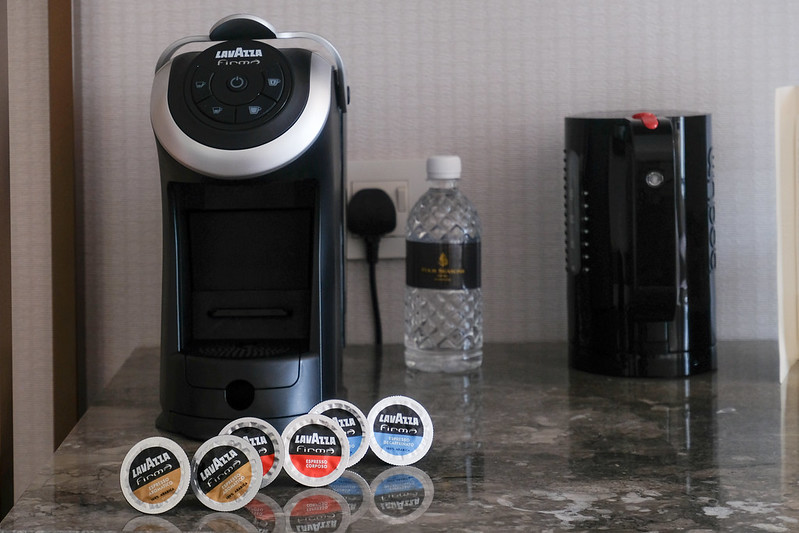 All guestrooms at Four Seasons Singapore come with a coffee machine and the property uses coffee from Lavazza. Tea bags comes from Monogram and I noted multiple packets of various types of tea stored in the minibar. 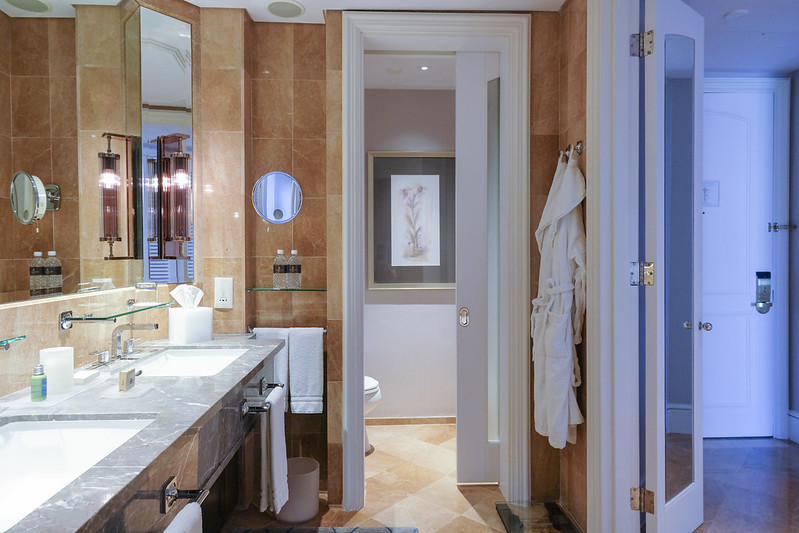 I normally view hotel bathrooms in the utilitarian sense but I have to say the ones at Four Seasons Singapore are rather photogenic as well. I loved the contrast between the marble surfaces and the European-style wallpaper while the sliding doors provided a decorative effect. As can be expected from a luxury hotel, the toilet area is neatly separated from the rest of the bathroom with a sliding door. 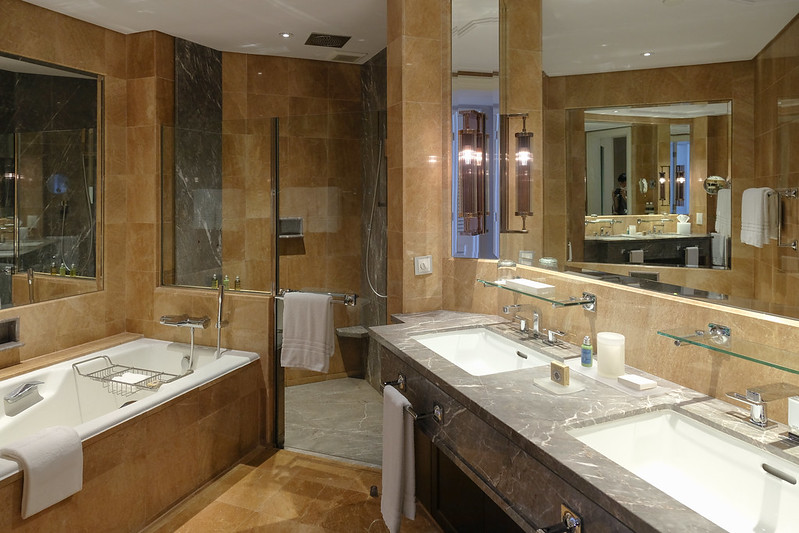 Toiletries come from L’Occitane. It seems that Four Seasons Singapore (or perhaps the Four Seasons brand, in general) has a partnership with the brand as I noted they also use L’Occitane products in the spa. 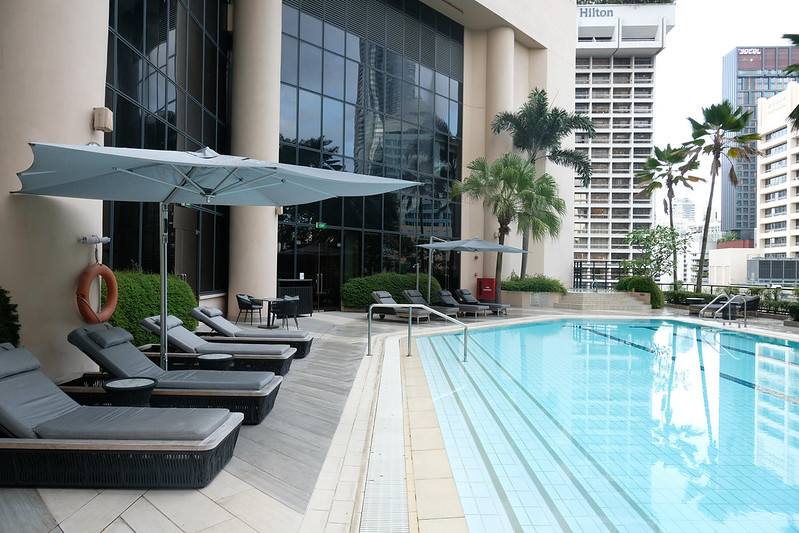 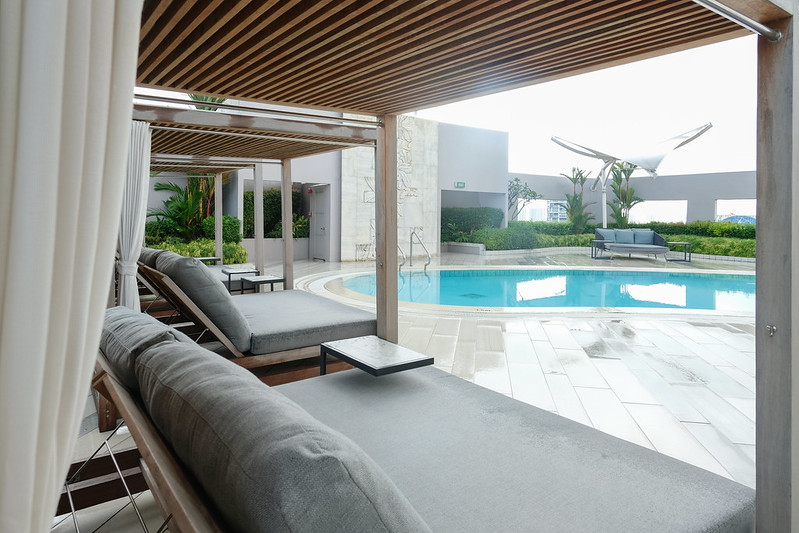 Four Seasons Singapore is noted for having two pools. One is a family pool located at the rooftop level (Level 20) while the other one is an adults-only pool located beside the spa in Level 3. Both pools were refreshingly empty during my time there and this is the only weekend staycation I have done in recent memory where I did not have to deal with a crowd in the pool. The only downside is that both pools, especially the lap pool beside the spa, look dated as these were not included in the refurbishment. If any consolation, the cabanas and seating areas were thoroughly up-to-date. Also, do note that the swimming pools at Four Seasons Singapore close rather early, at 7PM. 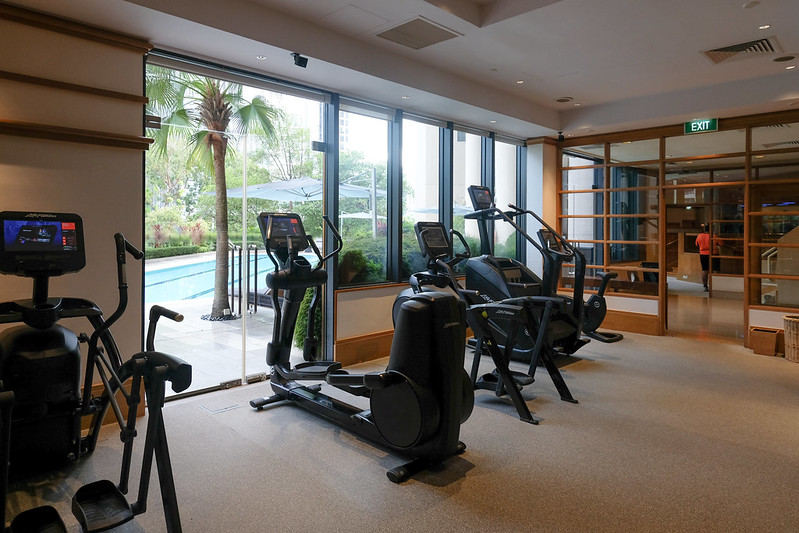 There is also a gym situated just beside the lower floor pool. It’s rather spacious with a complete set of exercise equipment coming from Life Fitness. There is a sufficient combination of cardio machines, weights and equipment for strength exercises. 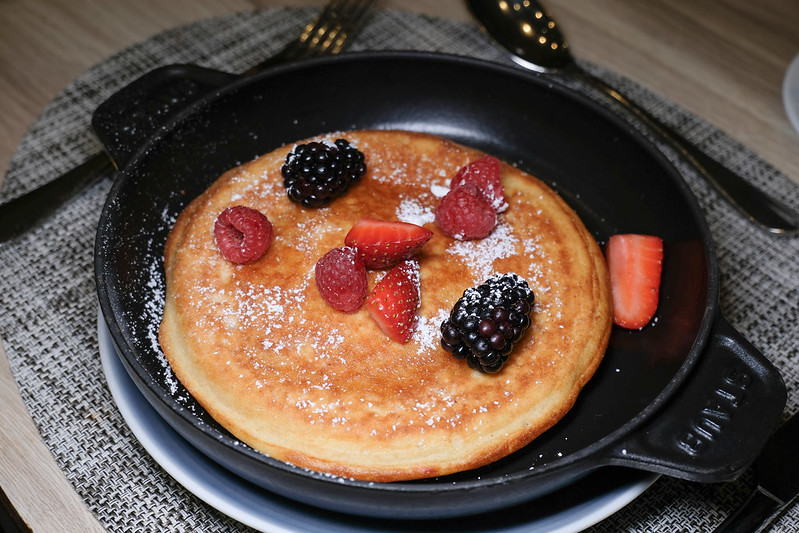 Breakfast is included as one of the benefits in my HoteLux booking and this was served in One Ninety Restaurant. Despite it being a weekend stay and even though I arrived at around 9:30AM for breakfast, I did not have to deal with a queue at all. Again, this is the only weekend staycation I have had in recent times where I did not have to wait for my turn to have my morning meal.

Breakfast at Four Seasons Singapore comes with a choice of main, unlimited servings of fruit and pastries from the ala carte buffet counter as well as one’s choice of drinks. The full breakfast menu can be accessed here. 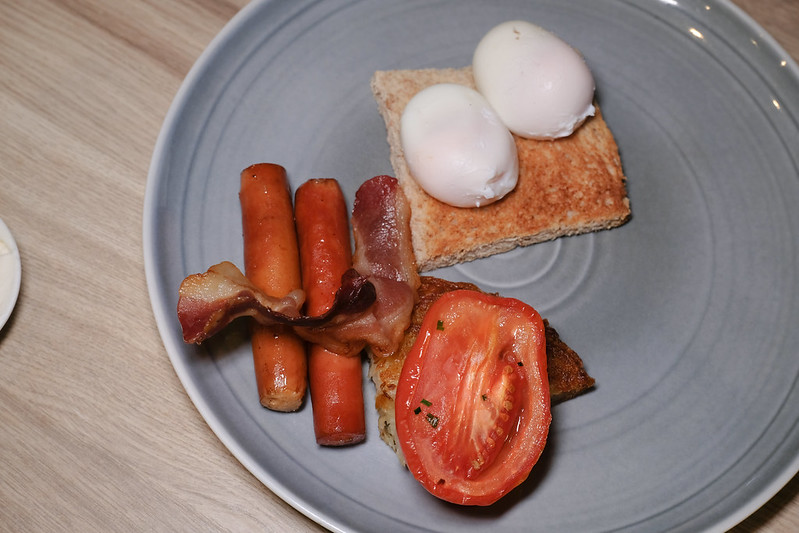 Given the limit to 1 serving for the mains, the breakfast here is not as extensive as other places though I did note that the Ricotta Pancake I chose was rather good and not part of the run-of-the-mill breakfast staples that I encounter elsewhere. The thick pancake possessed a nice crispy exterior which was excellent when eaten warm. I also overheard guests seated at other tables requesting to order multiple mains and noted that the servers acquiesced so it might be possible to order more if you ask nicely.

It was a hard decision to make between the Michelin-starred Jiang Nan Chun or One Ninety when it came to the US$100 room credit utilization. In the end, I went for One Ninety Restaurant as I had not eaten there for quite some time. 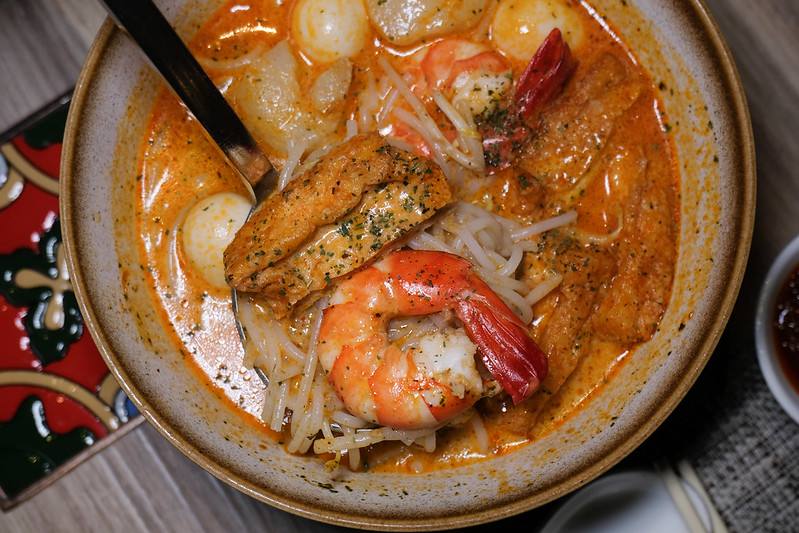 I went with the dishes which I had pleasant memories of from my last visit a couple of years back and ordered the Laksa (S$32). I remembered loving the coconut flavored broth back then and it turned out just the way I remembered. I also ordered the Snapper Bouillabaisse (S$48) which did not impress as much. One Ninety also has a semi-buffet option where one can get unlimited servings of salad and dessert from the buffet spread. As I don’t really fancy salad that much, I thought the ala carte option was enough. After ordering another side dish, my bill came to S$116. I still had S$10 to spare from my room credit (the exchange rate used by Four Seasons Singapore for the US$ room credit was SGD 1.26 = USD 1 at the time of stay).

For a quiet and relatively private staycation, Four Seasons Singapore is hard to beat. Its mere 255 rooms and ratio of facilities mean that you won’t likely have to book slots just to use the pool or time your breakfast when staying here. The rooms are huge – something that only older hotels provide these days – and it’s refreshing that the rooms have been kept up-to-date. I thoroughly enjoyed my staycation at Four Seasons Singapore and was wow-ed by the service. Housekeeping was even thoughtful enough to un-tangle my charging cable during turndown service and they asked no questions when I made a rather weird request at 1AM to remove a vase from the room that I did not like seeing. The only negative point I see, albeit a small one, is that some facilities seemed rather dated.

Booking this property with HoteLux meant that I got to enjoy extra benefits that are great to have in a staycation. The US$100 benefit in particular was rather handy. This stay truly felt like a getaway as I did not have to leave the hotel premises at all. The late check-out benefit also meant I got to maximize my staycation to span almost the entire weekend.

Alternatively, Four Seasons Singapore is also eligible for SingapoRediscovers usage. For eligible bookings, the hotel has a number of staycation packages available starting from S$386.05 net with breakfast and late check-out for weekday stays. You can book their staycation packages here.