Given the constant buzz and loyal patrons flocking to Buona Terra, it came as a surprise to me that this Michelin-starred establishment has been around since 2012. Eight years seems like an eternity in Singapore’s fine-dining scene and throughout that period of time, it has been the same chef – Denis Lucchi – helming the restaurant.

Buona Terra literally means “good earth” in Italian and the diversity of the ingredients featured in the cuisine reflects not just the delights of the land but also the treasures of the sea. Seasonality plays a big part in the menu, with dishes in their set menu changing from time to time. I visited to try Buona Terra’s autumn menu which meant plenty of white truffles. I dropped by for lunch where the restaurant has set menus ranging from 3-courses (S$88), 4-courses (S$108) to 5-courses (S$128). Wine pairing options are also available and start from S$58.

The restaurant is situated in Scotts Road, in one of the black-and-white bungalows previously used by the British military during the colonial era. Buona Terra shares the same bungalow as the Japanese restaurant, Ki-sho, where the latter takes up the front while Buona Terra occupies a room at the side of the house.

The cuisine at Buona Terra is reflective of Chef Denis Lucchi’s origins in Breschia where he spent his younger years near the famed Lake Garda. The sensibilities of Northern Italy are reflected in the dishes – relatively light and exquisitely prepared. 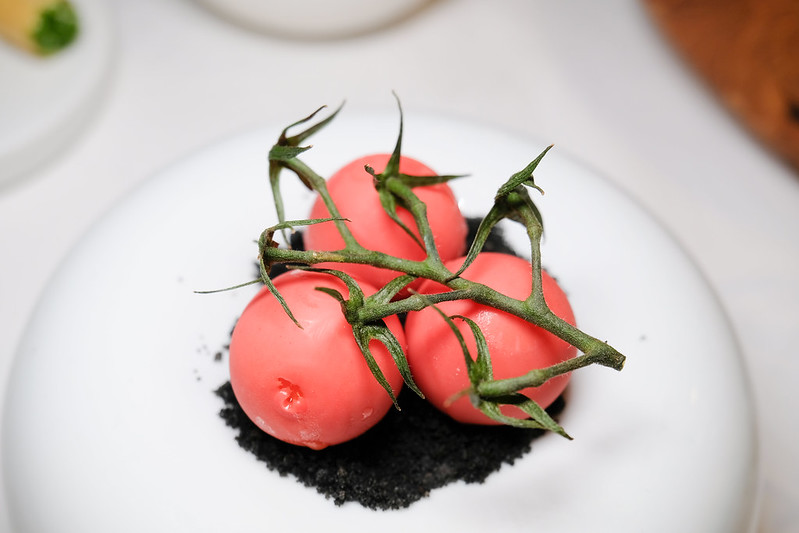 We started off lunch with a trio of canapes. The Tomato Ball consists of a frozen cocoa butter crust. Biting it allows the ball to burst open with cold gazpacho soup filling one’s mouth. 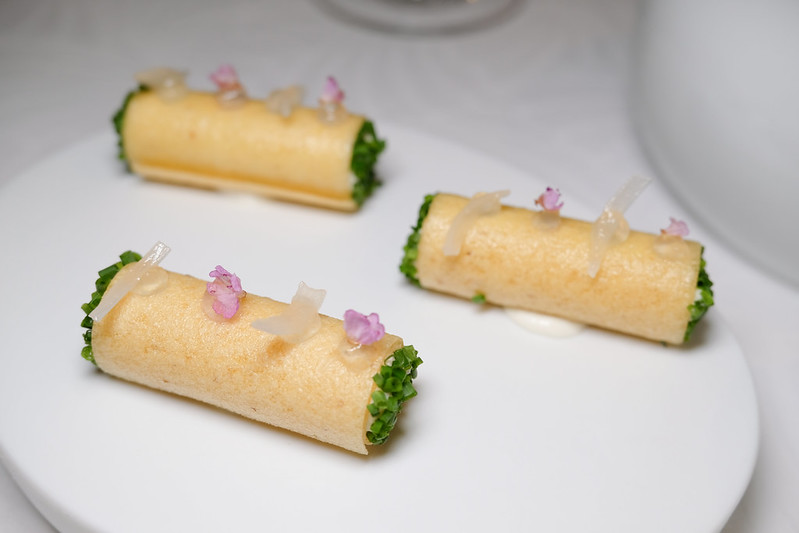 The Crispy Potato and Cod Fish Mousse is a remake of the Italian dish, Baccala Mantecato. Although it looks something like a mini spring roll, it really does taste like a more refined and mini version of the Venetian classic. The cod, looking mousse-like after being soaked and whipped, had just the right amount of salt and fragrance after being boiled together with bay leaf, rosemary and juniper berries. 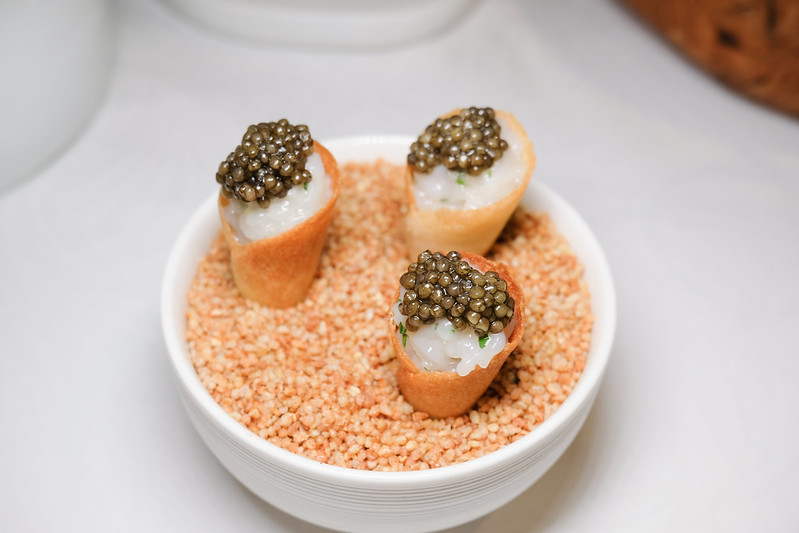 However, it was the Butter Cone with Scallop Tartare and Caviar which was my favorite snack among the three. It was an immediate explosion of flavors as I bit into the cone, with the freshness of the scallops ceviche immediately evident and the caviar giving it a savory profile. 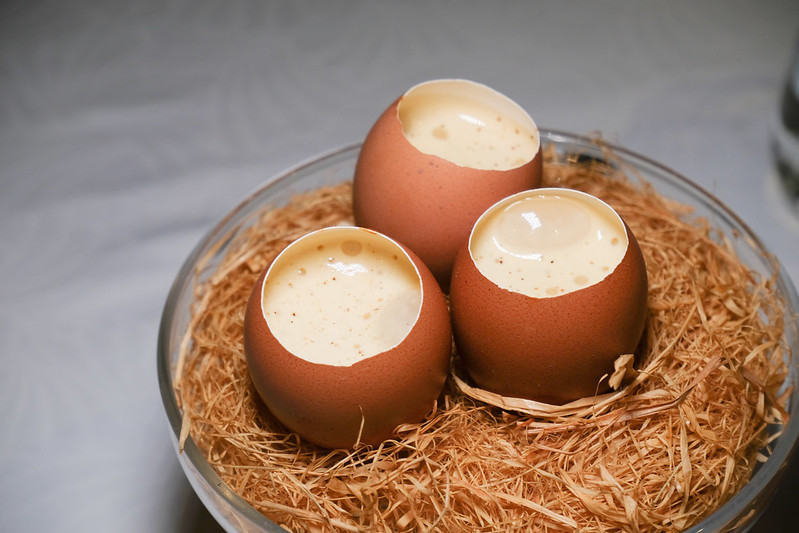 Probably the most theatrically-presented dish, the Snail Ragu with Martini Sabayon is at first surrounded with smoke when the server removes the lid. Inside, the snail ragu is encapsulated in an egg shell with its top so symmetrically cut off. There was quite a hefty amount of cream in there for one snail, but I’m not complaining as the egg sabayon was rather smooth and addictive. This is also one dish that draws comparisons with the cuisine of Italy’s northern neighbor – France. 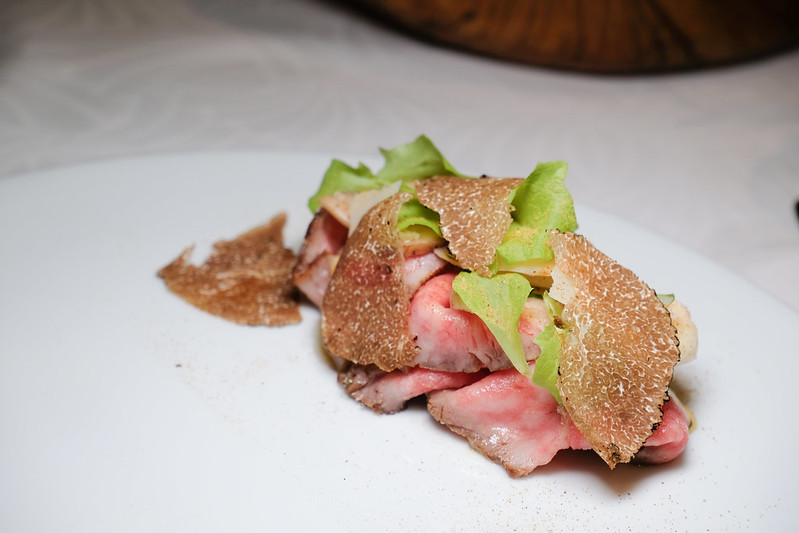 We returned to something familiarly Italian with the Beef Carpaccio with Porcini Mushrooms. Well-proportioned with just the right amount of herbs, mushrooms and black truffle, the star here was the tender A5 Wagyu Sendai sirloin with highly visible marbling. There was also a tinge of smokiness in the beef, as the meat is chargrilled over binchotan and smoked with cherry wood. 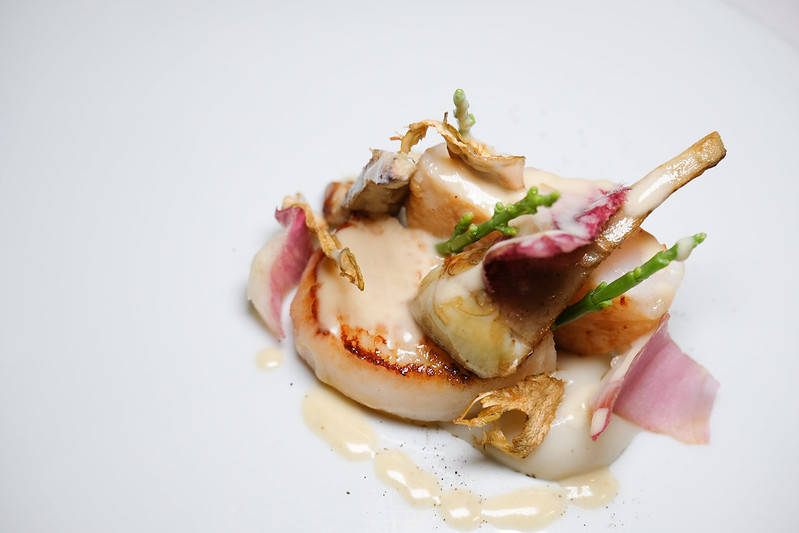 I was pleasantly surprised to see such large scallops as the one served during the next dish – Seared Scallop, Jerusalem Artichoke, Sea Asparagus and Anchovy Sauce. The Hokkaido-sourced scallop already came split in half but each piece was still bigger than what I usually encounter. 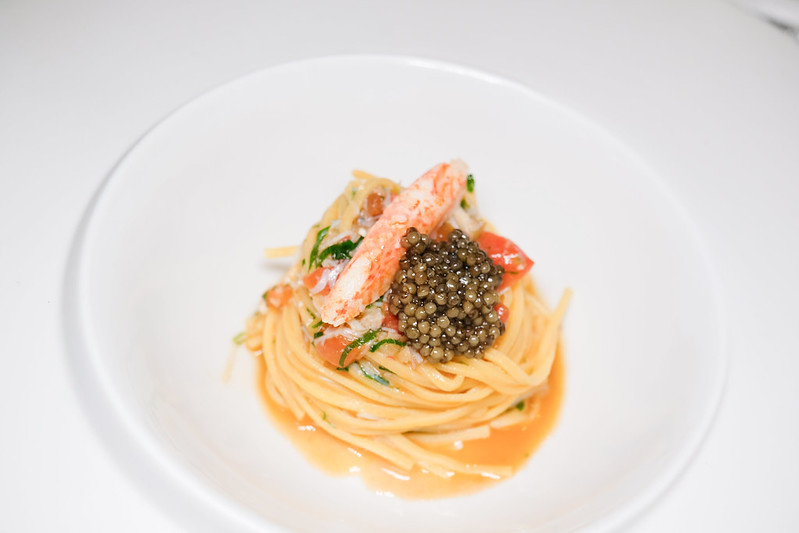 The Tagliolini with Crab and Caviar takes me back to pasta dishes consumed in Italy itself with its perfectly al dente tagliolini achieved by using 20% all-purpose flour for a firmer bite. The hairy crab used here is sourced from Japan and is available year-round, unlike the seasonal hairy crabs usually found in Chinese cuisine. 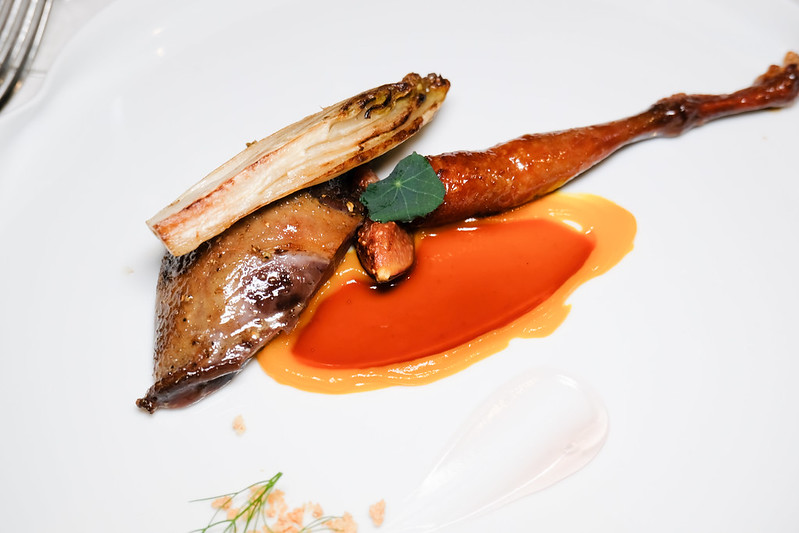 Pigeon is something rarely served in Singapore, and all my experiences with this bird have been in Chinese restaurants where I often find the breast part rather dry. In Buona Terra’s rendition of the bird, their Chargrilled Dry Aged Mieral Pigeon with Figs, Pumpkin, Amaretto and Moscato is done two ways. The thigh is sous vide for a few hours while the breast is skewered and char-grilled over binchotan. Despite the two ways of preparing it, what really surprised me about the pigeon was that it possessed a tenderness and sous-vide quality that permeated not just the thigh but even the breast which was char-grilled. There was no indication of dry-ness at all with the parts I had and the mixture of spices also diminished any hint of gamey-ness. 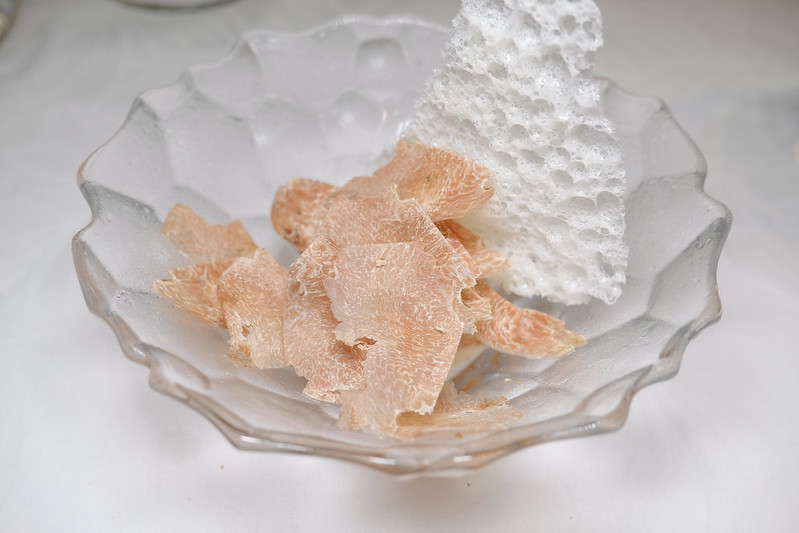 Salted Milk Ice Cream served as a prelude to our desserts. While I loved the copious amount of white truffle (supplement of S$88++ per 10grams) that accompanied this cold treat, I just wasn’t used to having something simultaneously cold and savory. 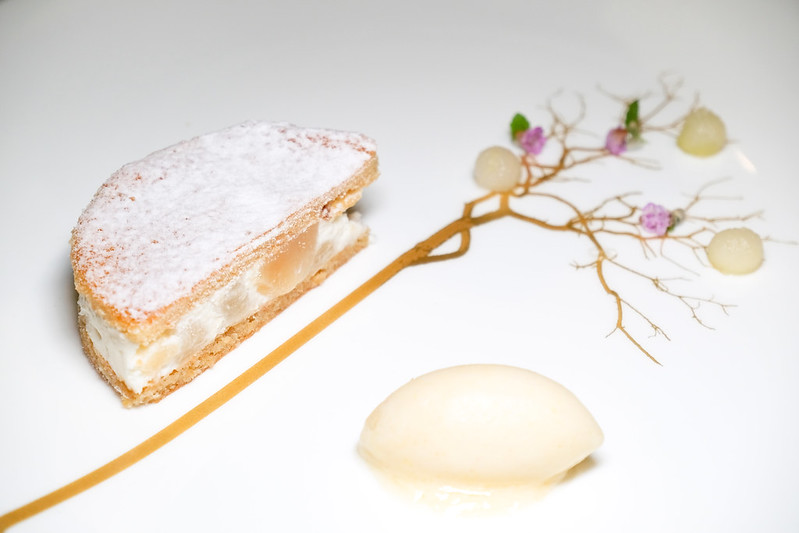 An ode to a classic cake typically served in Southern Italy, the Pear and Ricotta Cheese Cake was a well-rounded (and not to mention color-coordinated) dessert. The cheesecake is made with premium ricotta cheese from Puglia, with Cornice pears added into the mousse. 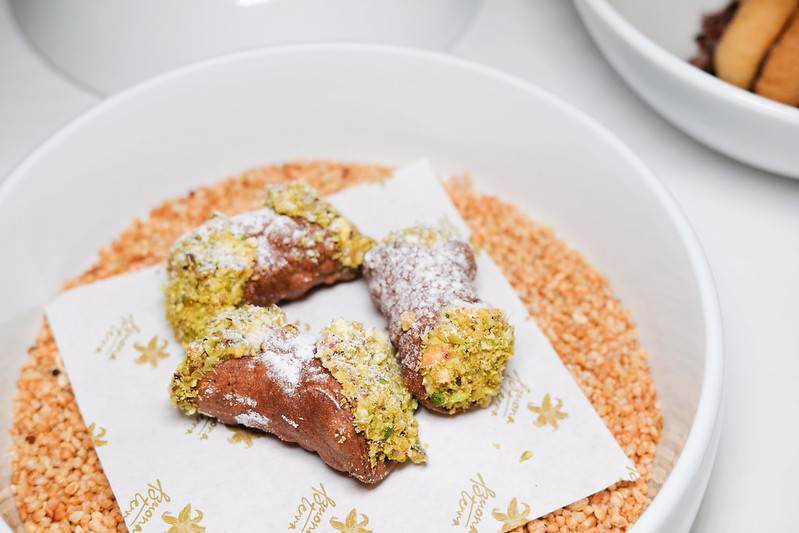 Even though each dish was relatively light, the numerous dishes we had meant that I was quite stuffed by the time the Petit Fours came. Still, I could not help but grab one piece each of the three sweet endings we had – Cannolo, Baci di Dama and Fruit Gelee.

Whether to impress a date, celebrate a special occasion or to simply have a hearty Italian meal; Buona Terra certainly fits the bill. What really surprised me about the restaurant was how exquisitely presented and relatively light each dish was. This contrasts heavily with trattoria-type dishes that most Singaporeans are accustomed to when they think of Italian cuisine. Dishes here also change frequently, depending on what’s available each season so I would think that each visit here is a surprise.