Tokyo has gained quite a bit of popularity in recent years as a travel destination. The capital of Japan has benefited in no small part by the weaker Yen and current moves by the government to ease visa restrictions from visitors of nearby countries. With a population of 13 million people, the metropolis offers a great juxtaposition of the exotic and ultramodern. This is a city of maid cafes, of restaurants run by robots and where you can hire professional cuddlers to hug you for a small fee. At the other end of the scale, some parts of the city offer a peek into a more traditional side of Japan.

If you are also heading west, check out this recommended itinerary for Osaka and Kyoto full of lesser-known attractions.

I have visited Tokyo for six times now and I always end up discovering a lot of new things to do in the city with each visit. Like the previous itineraries I’ve made, here are some suggestions on things to do in Tokyo and I have segregated the activities for first-timers, shopaholics and people seeking for something more unique.

This itinerary presents the quintessential sights of Tokyo, perfect for first timers or those who prefer to obtain an overview of this humongous city.

A Taste of Traditional Tokyo in Asakusa 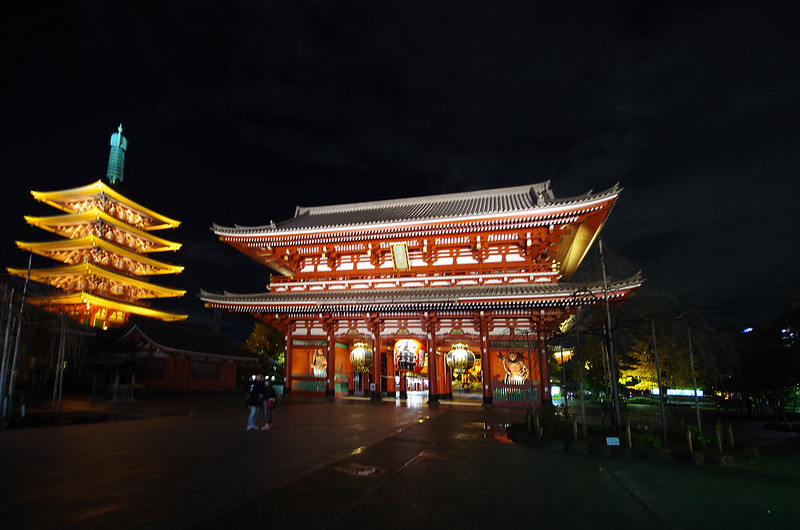 Alight at Asakusa Station. Start early and beat the crowds by visiting one of Tokyo’s most atmospheric neighborhoods – Asakusa. While here, don’t miss the Sensoji Temple (they open at 6am from April to November / 6:30am from October to March) which dates back from the year 645. To reach the temple, you go in via an iconic gate called Kaminarimon which is recognized as the symbol of the city. You also pass by a series of shops in a street called Nakamise. It’s full of interesting traditional handicrafts and food that you can easily spend hours here just browsing through the goods. You can also join a guided tour around Asakusa all while dressed up in a traditional kimono. 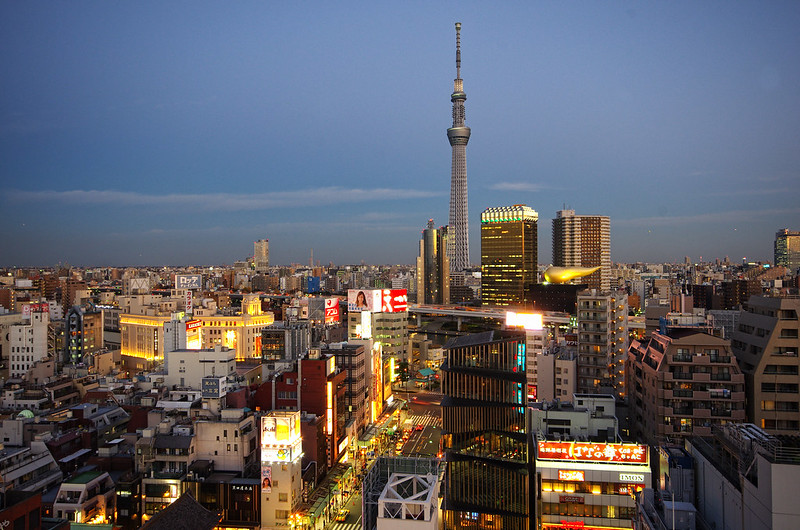 tokyo skytree as seen from asakusa

Since you’re already in Asakusa, the Tokyo Skytree is just a few stations away (or a short 20-minute walk). While it is an amazing structure – it is Japan’s tallest after all – I personally find the views too high to properly appreciate the city panorama. Alternatively, you can find some good viewing decks from which to see the tower instead. I stayed at The Gate Hotel by Hulic Asakusa Kaminarimon which has a rooftop bar that has excellent views of the Tokyo Skytree.

From Asakusa, it’s a quick train ride to Ueno Station. While Tokyo has several parks, Ueno Park is different in the sense that the public grounds also contain several museums including the Tokyo National Museum, National Museum for Western Art, Tokyo Metropolitan Art Museum and National Science Museum. You can easily spend an entire afternoon here if you are a museum buff 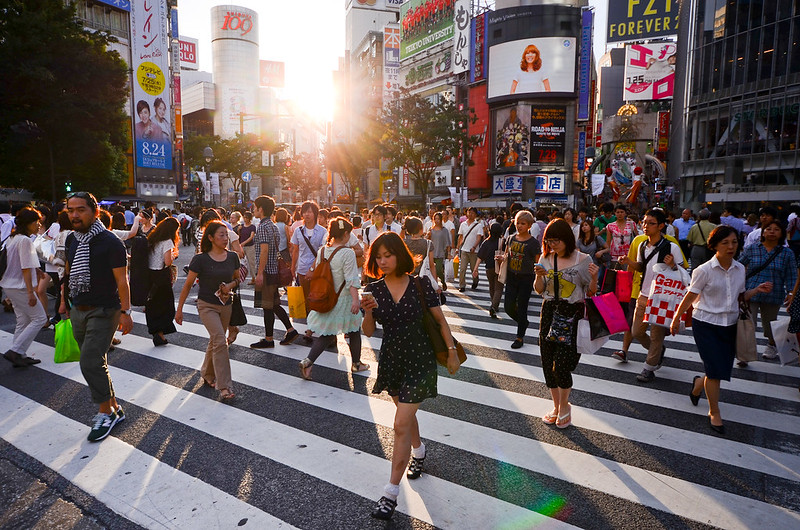 From Ueno, you can easily take the Ginza line down to Shibuya Station. My favorite place to visit in Tokyo at night, Shibuya is perhaps one of the busiest crossings you’ll ever come to see anywhere in the world. The place is full of neon lights even at night and is a hub for youngsters. Don’t miss the statue of Hachiko while you are here. Shibuya is also the place to do a bit of shopping. If you prefer to do something new since your last visit, the Shibuya Sky which opened in late 2019 boasts of a 360 degree open air observation deck. This differs from the other observation decks in Tokyo as the others are mostly indoors. 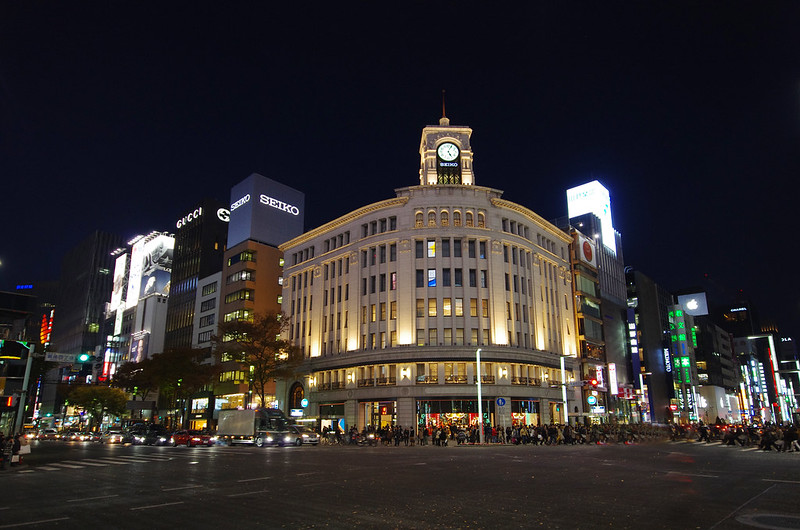 Take a stroll down the Ginza. This is historically Tokyo’s main shopping street. However, it is no longer the most high-end – Omotesando now lays claim to that. You can find a lot of well-known brands here including the largest Uniqlo store in the world. Opposite that is the high-end shopping mall, Ginza Six, which boasts of a sleek interior and plenty of specialty stores. If you visit during the weekends, you will fine Ginza to be a huge pedestrian-only zone. 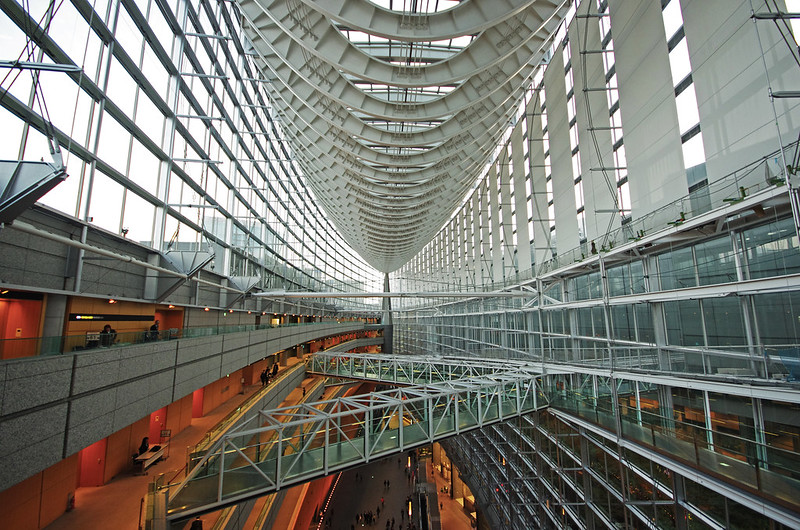 From the Ginza, it is a reasonable walk to the Imperial Palace area but first stop by the architecturally impressive Tokyo International Forum for a look-see. Make sure to drop by the upper floors to check out the astounding curves built with steel and glass. 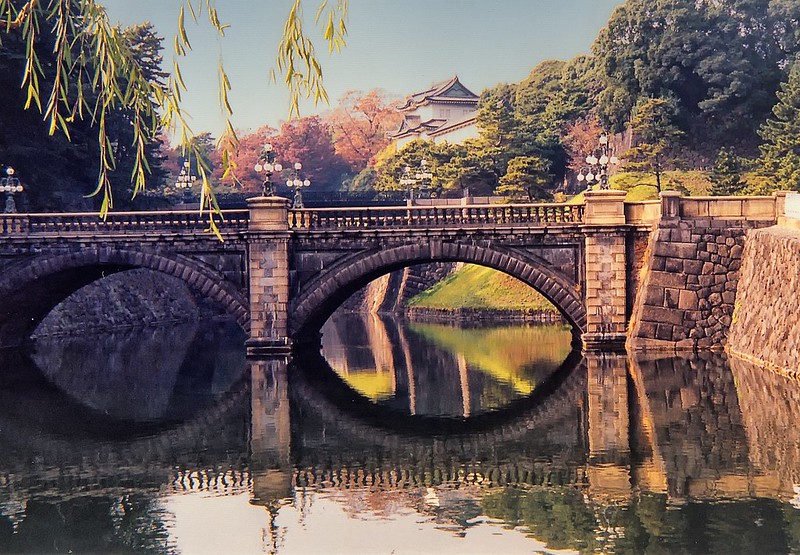 The Imperial Palace grounds is another 5 to 10 minute walk away. The area is extensive but is mostly closed to the public except during certain holidays and upon booking of a private tour with the Imperial Household Agency. Nonetheless, the moat around the palace is quite a popular tourist attraction. You can catch glimpses of a few imperial buildings while walking around it 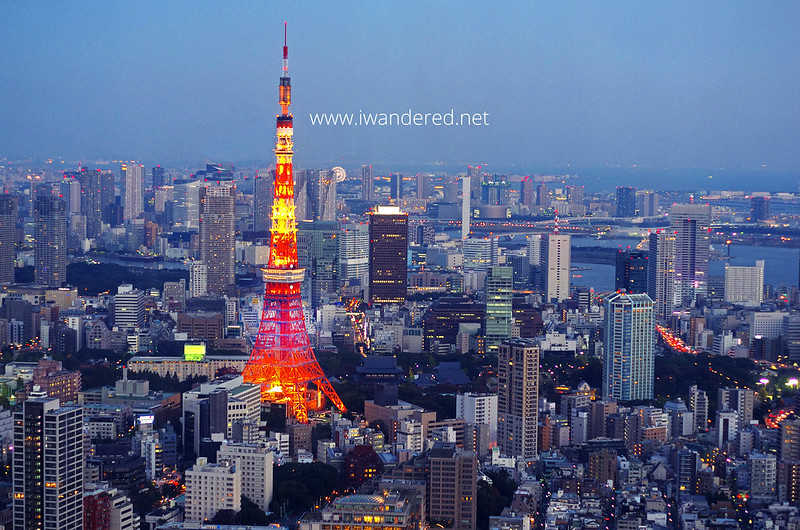 One of my favorite places for panoramic views of the city is the Tokyo City View at the top of Mori Tower in Roppongi Hills. It is by no means the tallest observation deck in the city but you get to see a better view with some iconic buildings such as the Tokyo Tower and parts of the bay. You can book here to get a discount on the entrance fee.

Roppongi is also a buzzing nightlife district and highly popular with expats and tourists. There are plenty of foreigner-friendly bars and restaurants, including some with Michelin stars. If you ever get tired of Japanese cuisine (I can’t imagine anyone would), Roppongi is your best bet in finding restaurants catering to western or fusion cuisine 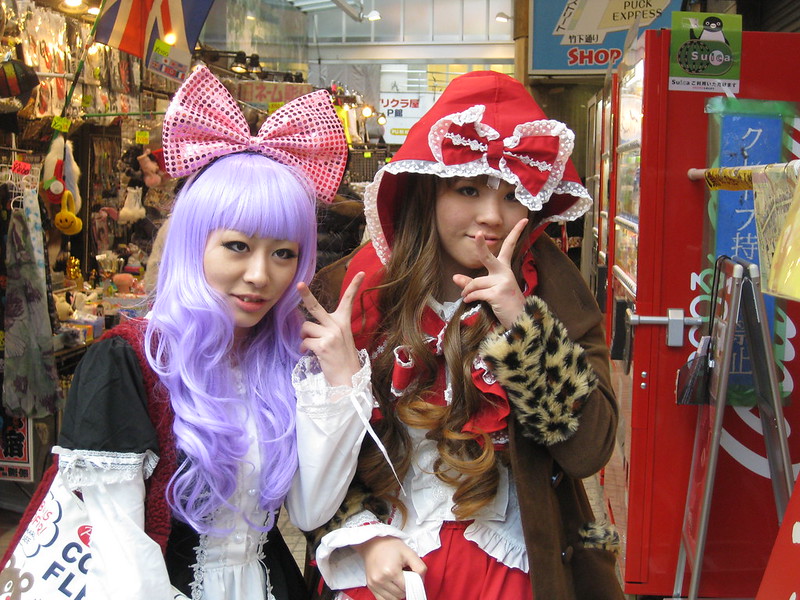 Start the day at Harajuku which is known as a center of youth culture in Tokyo. If you are there during a weekend, you may find places such as Yoyogi Park filled with artists, musicians and cosplayers in fancy costumes. After having your fill gawking at the people, you can head to Meiji Shrine which is dedicated to the spirits of the former Emperor Meiji and his wife.

Living the High Life in Omotesando 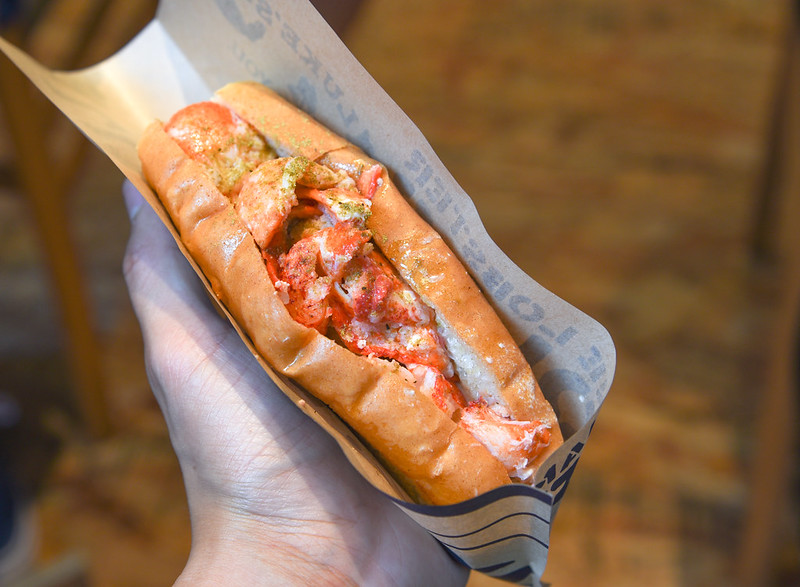 Tokyo’s most high-end shopping street, Omotesando, is just a short walk away from Harajuku. While most of the stores here sell things that are out of most people’s budgets, it is still a great place for people watching. There are also plenty of cafes around the area. If you are looking for a caffeine fix, backstreet cafes such as Lattest Omotesando are your best bets. Luke’s Lobster also has a branch in Omotesando It is frequented by locals and tourists alike. Be prepared to queue.

If you still haven’t had enough of Tokyo’s nightlife, it’s worthwhile to check out Shinjuku which offers a peek into what locals do after dark. You’ll find a mix between hole-in-the-wall bars, watering holes serving craft beer and whisky as well as live music venues 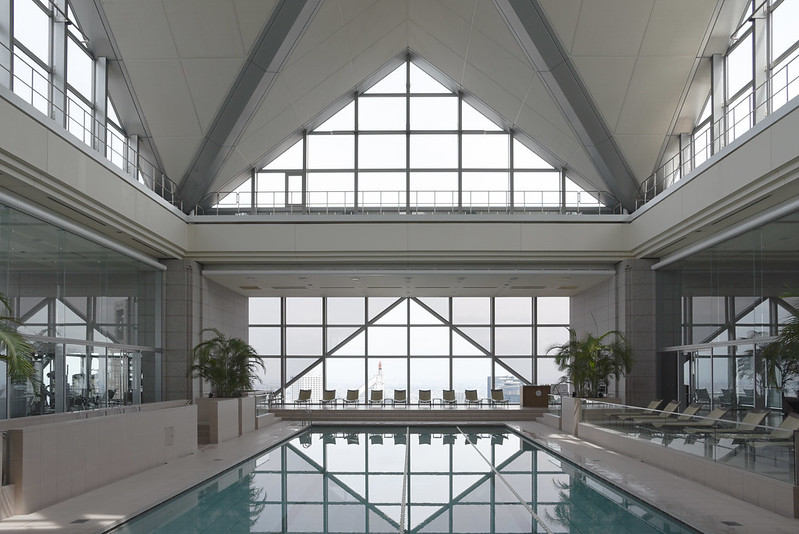 the iconic park hyatt tokyo – the “lost in translation” hotel

If you are a fan of the movie “Lost in Translation,” you’ll be pleased to note that the iconic Park Hyatt Tokyo is located well within Shinjuku. The rooms are of course, open to guests only, but you can relive scenes from the film at the New York Bar where Bill Murray’s character had chilled out in the film 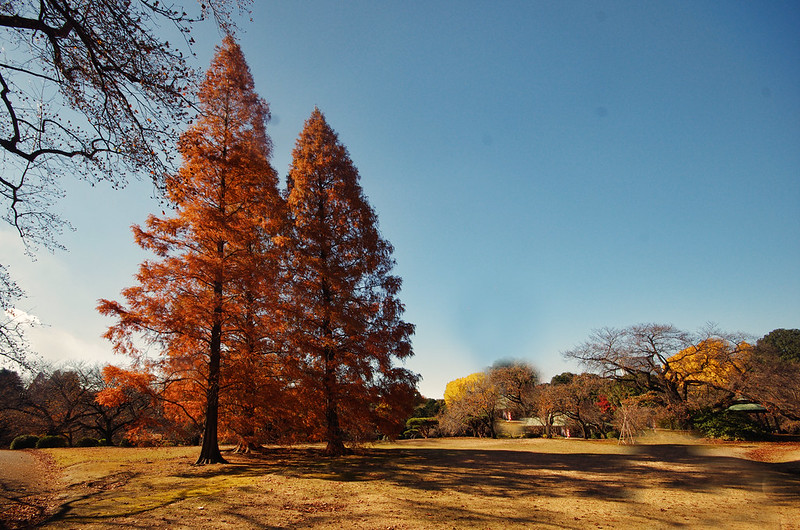 If you manage to finish the other sights early and decide to head to Shinjuku before it gets dark, it’s worthwhile to check out Shinjuku Gyoen, one of the largest public parks in the inner wards of Tokyo. The park is one of the best places in Tokyo to see autumn colors in late November/early December and cherry blossoms in April

Tokyo For Shopaholics (and Hipsters)

Aside from the activities suggested above, you can add the following into your itinerary for a more well-rounded shopping experience in Tokyo

Unique Things to Do in Tokyo

The city is known for offering a lot of eccentric services that cater to just about any interest group. In case you’ve been to Tokyo so many times that you’re looking for something different, here are some unusual things to do in the city that you can add to your itinerary 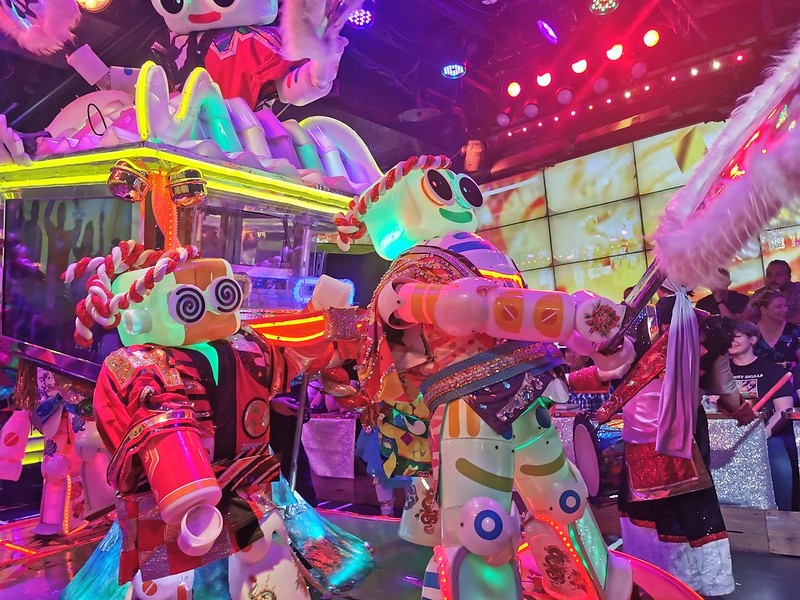 Other Tips for Tokyo

Getting From Narita Airport to Tokyo

Narita Airport, the main airport serving Tokyo (the other one being Haneda Airport) is located some 70 km away from town. A taxi ride takes more than an hour and can easily cost almost US$300. To get to the city quick and comfortably, take either:

Getting From Haneda Airport to Tokyo

Haneda Airport is much nearer to Tokyo than Narita Airport but taking a taxi is still expensive and could set you back by almost US$100. Other quick and efficient ways to get to the city include the following:

Tokyo’s subway system is vast and local trains / subways can take you to almost any point of interest within the city. Taxis are also plentiful but I don’t recommend these as they are very expensive. For subways / local trains, you can either buy single tickets or a pass valid for a couple of days. I recommend buying a subway pass if you foresee yourself taking the subway at least 4 times each day. If you are in Tokyo for sightseeing, this condition is easily met. The subway passes come in 24, 48 and 72 hour variants.

Where to Stay in Tokyo

Budget – Rooms at Richmond Asakusa are quite modest but are among the most decently priced for a conveniently located 3-star hotel in Tokyo. The hotel is near Sensoji Temple with plenty of food options nearby. If you prefer to stay in the heart of Tokyo’s shopping area, the Sunroute Hotel Ginza is located mere steps from the renowned shopping street.

Midrange – I’ve stayed in a number of hotels in Tokyo but one I can recommend is The Gate Hotel by Hulic in Asakusa near the Sensoji Temple. Although styled as a boutique / 4 star hotel, I thought the offerings were quite luxe at a relatively more affordable price compared to other Tokyo digs. I still have fond memories of the freshly squeezed orange juice in the morning. Alternatively, the Daiwa Roynet Ginza Hotel is conveniently located if you wish to be situated near the prime shopping district.

Luxury – The iconic Park Hyatt Tokyo in Shinjuku is the cream of the crop where Tokyo hotels are concerned. It is worth staying here even for just one night like I did especially if you are a fan of the film, “Lost in Translation” which stars Bill Murray and Scarlet Johanssen.

For other Tokyo hotels, you can check out HERE.