Mention Tokyo and the first impressions that come to mind probably won’t stray away from neon lights, innovative gadgets and concrete jungles. What many do not realize is that Tokyo is one of the oldest big cities in the world. Its population had already topped 1 million in the year 1800 which would have given rise to a large swathe of historical sites scattered around town. Unfortunately, many of them were destroyed during the war. Today, it is still very much possible to see the other, more traditional side of Tokyo if you know where to look. With their narrow streets, colorful shops as well as remarkable architecture; these pockets of nostalgia offer a great contrast to the modernity which Japan’s capital is known for. 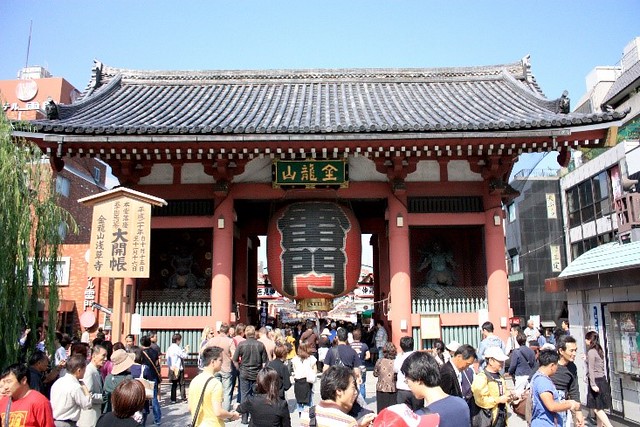 The neighborhood of Asakusa in Taito Ward is the most established area to see the old side of Tokyo. Asakusa is best known for the Sensoji Temple and the Kaminarimon Gate in front of it with its iconic red lantern.

Asakusa presents a dramatic juxtaposition to the fast-paced and cutting-edge side of Tokyo. Here, rickshaws compete for space with Japanese-made cars while a good proportion of locals go about their daily business dressed in classical attire. 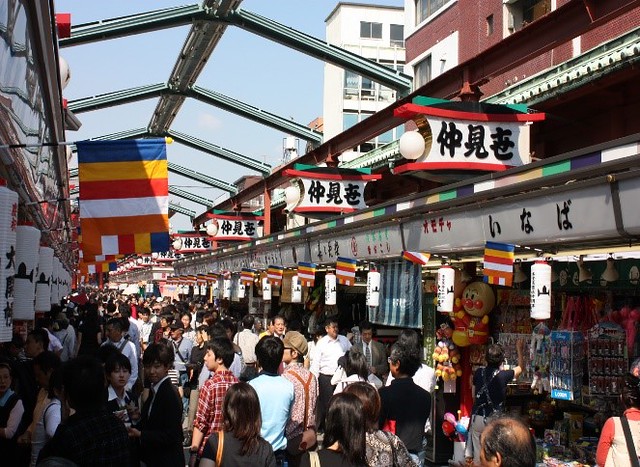 Nakamise-dori is the name of the street stretching from Kaminarimon Gate to the Sensoji Temple. Here, you will find several stores selling religious souvenirs and accessories as well as Japanese snacks. Look out for the age-manju stall which sells a local pastry stuffed with various flavors including pumpkin, green tea, red bean and sesame. Check out the senbei – essentially rice crackers with different toppings. 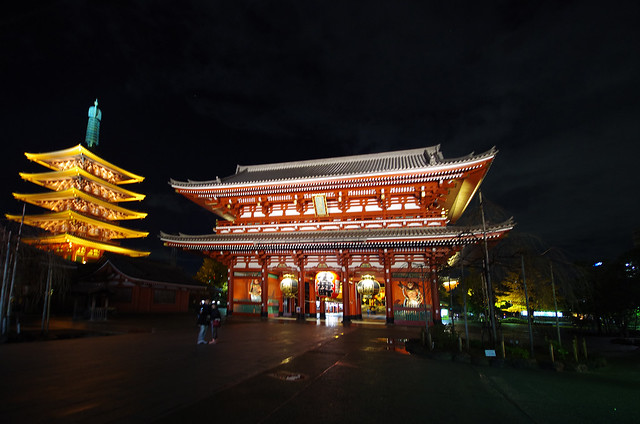 At the end of the street, you pass through another entryway called Hozomon Gate. Beyond that, Tokyo’s oldest temple stands majestically. The Kannondo Hall is the main building of the temple and is the structure that comes to mind whenever people think of the Sensoji Temple. Its alternating red and white shade is best appreciated just after sunset when the building and the towers surrounding it are floodlit and cast an ethereal glow against a dark blue sky.

The five story Goju-no-to Pagoda just left of the main hall is equally emblematic of the Sensoji Temple. A relatively recent addition to the centuries-old temple, the tower’s construction is modeled after the Daigoji Temple in Kyoto. To the right of the main hall is the venerated Asakusa Shrine. The venue is best known as the base for the Sanja Matsuri Festival, probably Tokyo’s most famous with nearly two million visitors coming to Asakusa over three days.

Once you’re done marveling the temple, retrace your steps and head back to Nakamise-dori. Walk a few blocks until you reach Shin-Nakamise. Unlike its more popular neighbor, Shin Nakamise is usually less crowded and not as touristy. You’ll find plenty of ice cream shops, quaint restaurants, cafes and street stalls. Make sure to come with an empty stomach and try a stick or two of dango.

A short walk to the northwest of the temple is the Traditional Crafts Museum. It showcases various handicrafts that were prevalent during the time when Tokyo was known as Edo in the 18th century. If you come here during the weekend, you can also witness craftsmen doing live demonstrations of their work and you have the opportunity to join in for classes. The museum has two floors and in there is a section in the ground floor where handcrafted items are displayed for sale. 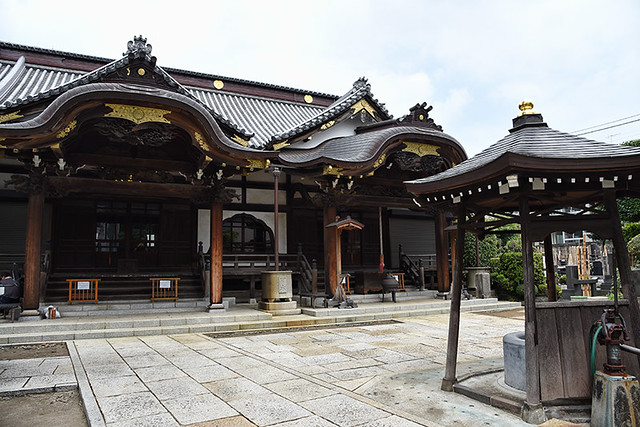 A less known place for which to see the traditional side of Tokyo, Yanaka in Taito Ward is a splendid slice of the city’s past. During World War 2, the Yanaka area was spared from bombing which allowed many old-style structures to remain. It’s a wonderful place for a carefree wander especially with the charming old houses, decidedly local flavor and sheer number of temples. The best way to reach Yanaka is by taking the JR Yamanote Line and exiting at Nippori station. 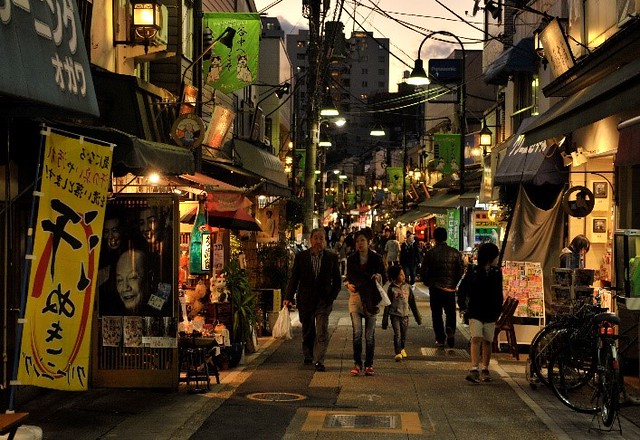 Once you exit the station, you will find yourself at Yanaka Ginza, the district’s own shopping street which is named after the famous one in Chuo Ward. You won’t find nearly as many shops in this pedestrian-only street but the mainly independent businesses here are a great alternative to the big name brands in the other more well-known Ginza. 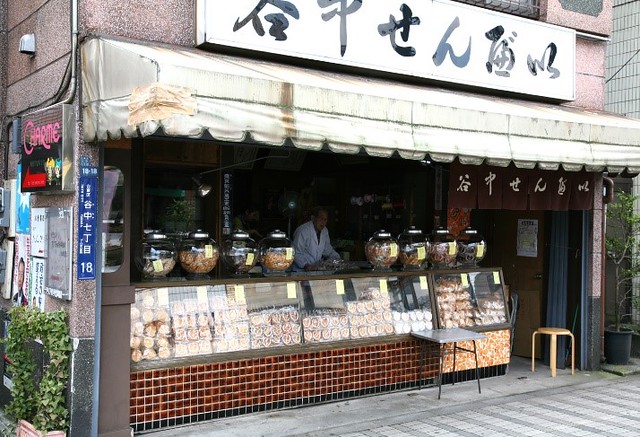 The area around Yanaka has more than seventy temples. Tennoji Temple is the largest and was built in the 13th century. 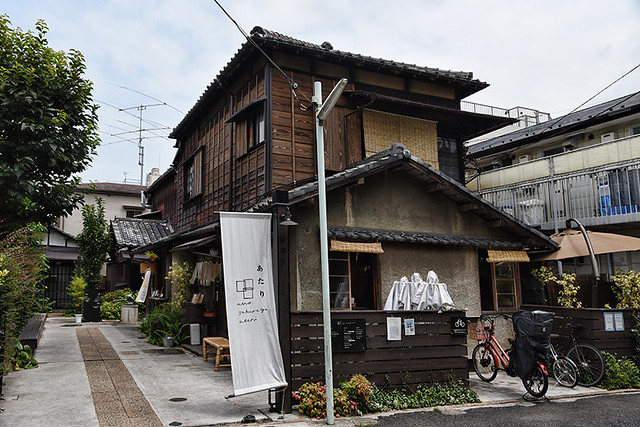 At the southern end of Yanaka near Ueno Park sits the Ueno Sakuragi Atari. It’s a complex consisting of three buildings that date back from the pre-war Showa era. Aside from having plenty of photo opportunities to capture the retro side of Tokyo, the venue has also been transformed into a multi-concept space that includes a beer hall, bakery, olive shop and even a toy store. 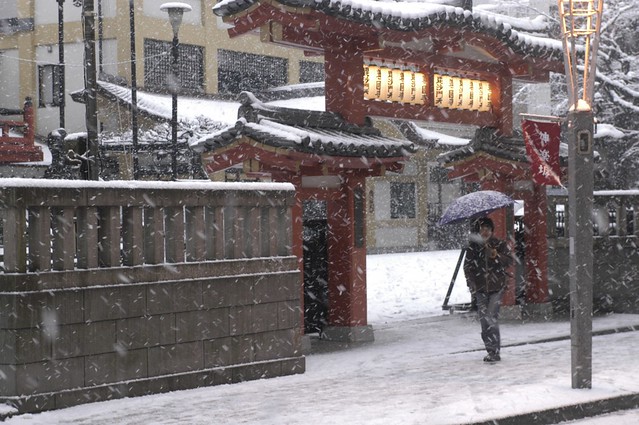 While it does not immediately occur to most as a historical area, Kagurazaka near Iidabashi station was once located just outside the moat of Edo Castle. Its historically convenient location made it an entertainment district of the time with plenty of geisha houses. While Kagurazaka these days is known more as a shopping area and an enclave for French expats, some of these geisha houses remain and can be explored while wandering through the back alleys. 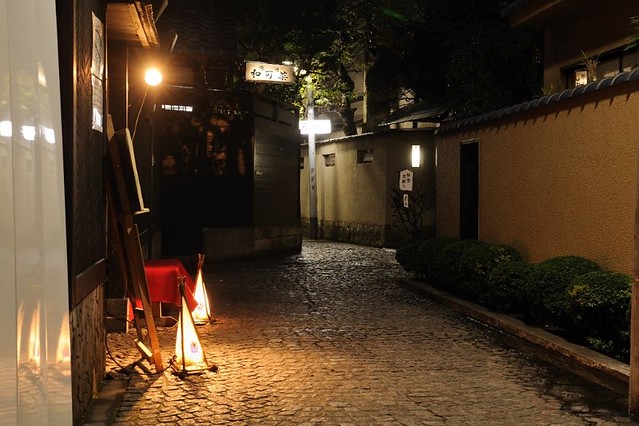 Every fourth Friday and Saturday of July, the area becomes host to the Kagurazaka Awa Odori festival, a highly choreographed event based on the one in Tokushima in Shikoku.

Where to Stay in Tokyo

The Gate Hotel by Hulic is located right by one of the traditional areas of Tokyo, specifically Asakusa. The Sensoji Temple is within walking distance and the hotel is consistently ranked as one of the best mid-range independent hotels in the city.

For other Tokyo hotels, you can check out HERE.

The Tokyo Convention and Visitors Bureau (TCVB) will be at the Travel Revolution. Visit their booth to obtain more information on traveling to Tokyo.