The ancient temple complex of Vat Phou is located in the southern part of Laos, not far from the Mekong River, the major town of Pakse and the small community of Champasak. It is one of the 2 UNESCO World Heritage Sites in Laos, the other being Luangprabang. I crossed the Thai border to spend a few days in Laos just to see this ancient wonder. 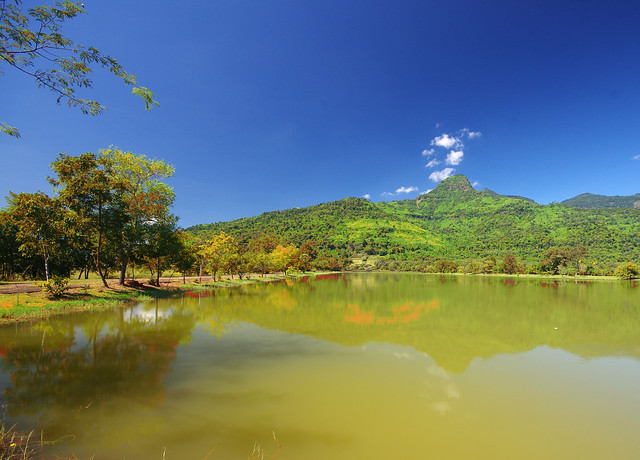 Traversing the ancient temple complex, I could not help but gape at the scene. It was not because I had to walk nearly 1 kilometer from the entrance just to get to the temples, or that there was a series of disjointed steps that led to the elevated sanctuary on the way to Mount Phu Kao. Rather, the source of my amazement was the sheer enormity of the site. By far, Vat Phou is the most scenic among the ancient Khmer ruins dotting Indochina. With a base at the foot of a mountain, the ancient rulers could not have chosen a better location. 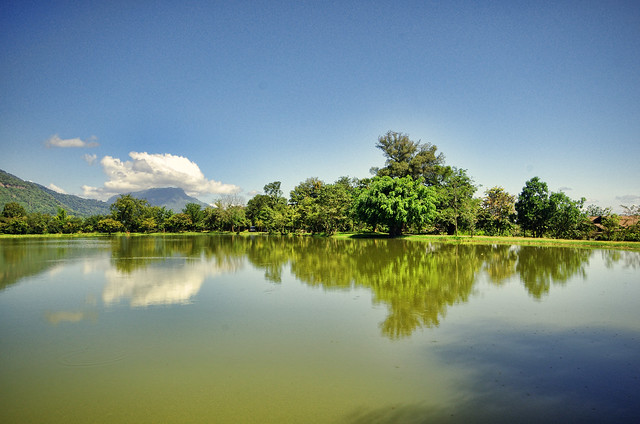 the view from the reservoir or bareay leading to the temple

I left my resort early in the morning on a tuktuk to get to the temples. From Champasak town, Vat Phou is about 20 minutes away. I spotted a few tourists biking in the (already hot) early morning sun, to my bewilderment. I couldn’t imagine why anyone would want to be encumbered by such a heatstroke-inducing comeuppance.

On the way to the temples, I passed by a large reservoir or bareay, similar to the ones found in other Khmer sites. The clear waters, coupled by the majestic mountain scenery, created a mood that I thought was unmatched even by the much more renowned Angkor Wat. 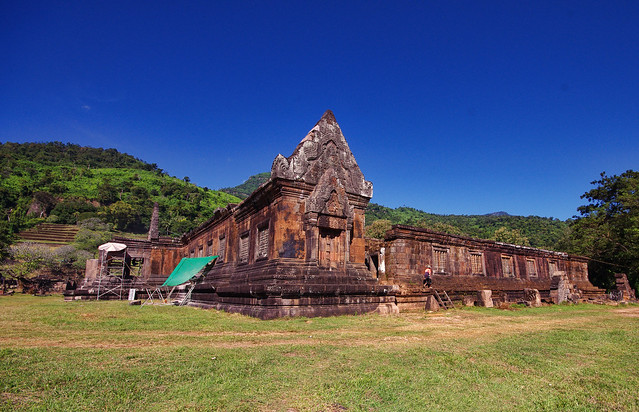 After walking for 1 kilometer or so, I finally reached the front part of the temple – two palaces standing on either side of the complex. David, the owner of the resort I stayed in, keenly pointed out that each palace, though roughly identical, was being restored by different teams. The northern one was being done by an Indian delegation while the southern one by the French. 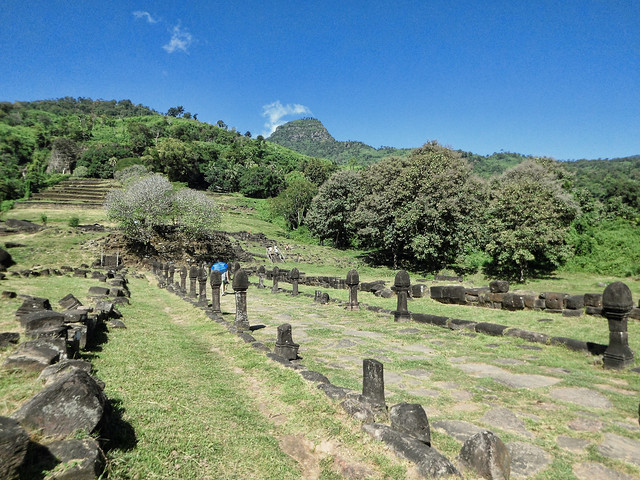 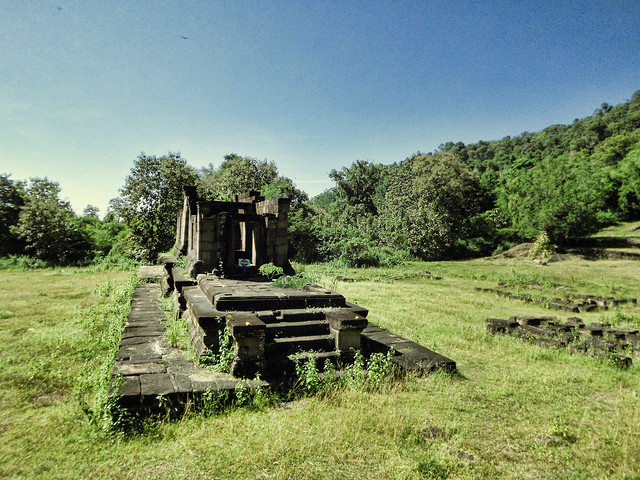 From there, a pathway lined with phallic statues led to the other sections. The Nandin temple which contains Shiva’s mount, supposedly has a passageway that leads all the way to Angkor. No one has actually traversed that path in the last 40 years due to landmines but satellite images still show that path despite the vegetation that has grown around it. 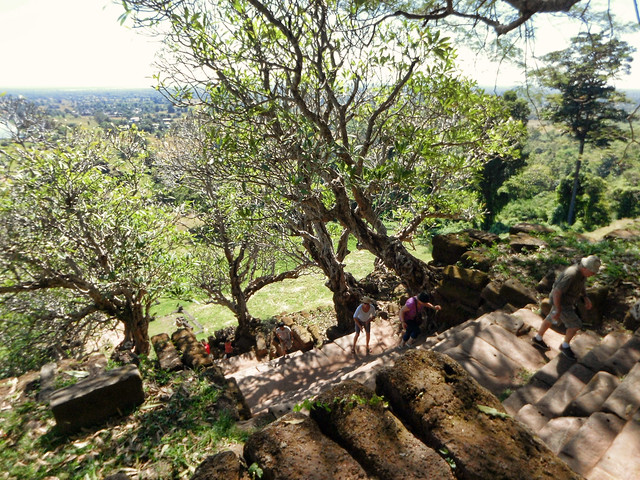 steep steps to the temple

The Nandin Temple was basically where the easy part ended and the hard part began. From here, I started climbing a series of uneven steps, big and narrow ones and in a state of disrepair akin to those found in Angkor. 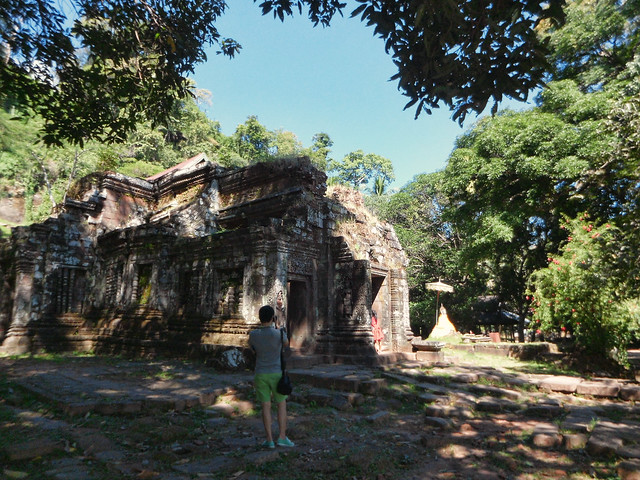 And there it was! After climbing seven flights of stairs, I was finally at the central sanctuary of Vat Phou. Compared to ancient Khmer ruins elsewhere, the sanctuary of Vat Phou does not contain a prominent tower. In fact, certain parts of it have the roof missing! Despite its remoteness and rather difficult access point, it still remains to be an active place of worship with a more modern statue of the Buddha inside. 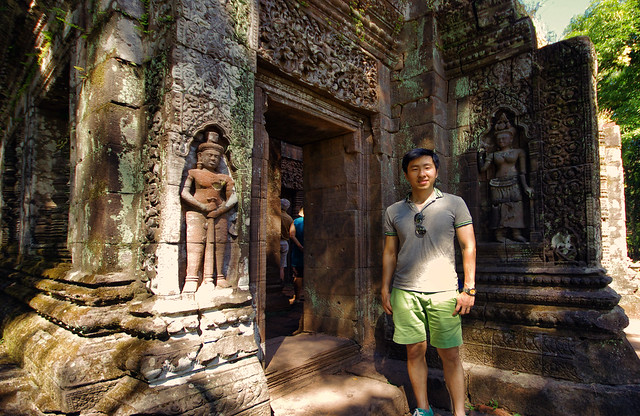 the eastern wall of the sanctuary lined with carvings

Nevertheless, the structure remains impressive despite being rather dilapidated. The walls are lined with statues of dvarapalas (gate guardians) and devatas. The lintels also have quite intricate stone carvings, including one of Vishnu on a garuda. There’s something about buildings like these located in relatively inaccessible places that tend to leave me in awe. The effort to build something of this scale more than 1,500 years ago must have been astounding. 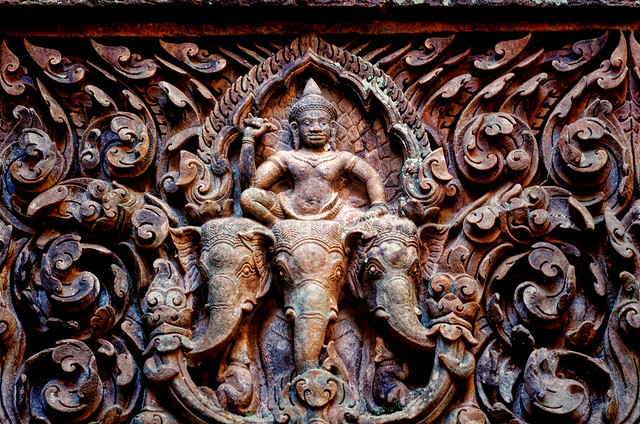 close-up of the lintels at vat phou

Aside from the main sanctuary, the topmost part of the temple also has a library which has been devastated by the forces of time and a natural spring. After a long climb, I stood there in the shade and surveyed the view – this time to the west – of the path I had just crossed. I checked my watch and the time was roughly 10 in the morning. So far, I had only met a small group of French tourists and the odd Malaysian. Vat Phou is not very touristed. 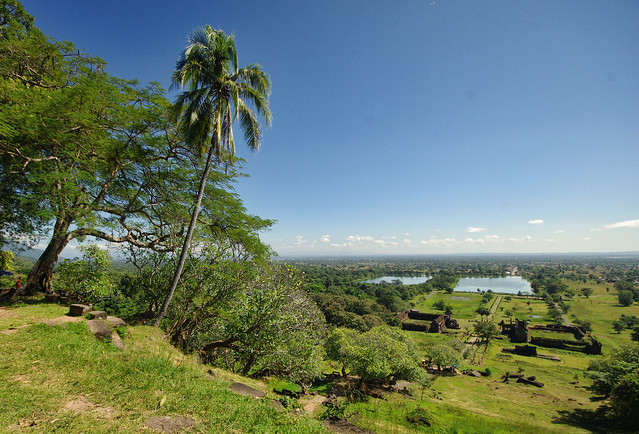 Compared to other ancient sites which may win over Vat Phou in terms of architectural detail, what I love about this UNESCO World Heritage Site in Southern Laos is the landscape surrounding it. Vat Phou is a place where it’s still possible to imagine oneself as a famous archeologist like Indiana Jones. Large tourist groups are few and far between. Also, the state of disrepair here makes the buildings look more authentic. Vat Phou may be in the middle of nowhere, but that’s just part of the appeal.

How to Visit Vat Phou

From Pakse – by songthaew (hired), it takes about an hour. Expect to pay from $25 and above for the hired vehicle
From Champasak – it’s possible to bike to the temple from Champasak town (around 15-20 minutes depending on your own pace). Otherwise, hiring a songthaew is also possible (10 minute ride).

Admission as of this writing is 30,000 kip. Thai Baht is also acceptable for admission payment.