Mongolia may be known more for its great outdoors, yurt stays and other natural attractions but any visitor to this North Asian country will inevitably find themselves in Ulaanbaatar at least once during their trip. For many years, the Mongolian capital was nothing more than a large town with several ger (yurt) districts surrounding the compact city center but the resources boom of the past years has brought a new life to the city with luxury hotels, skyscrapers and upscale malls now dotting the urban landscape. For visitors to Ulaanbaatar, there are enough attractions to keep one busy for a few days at least. 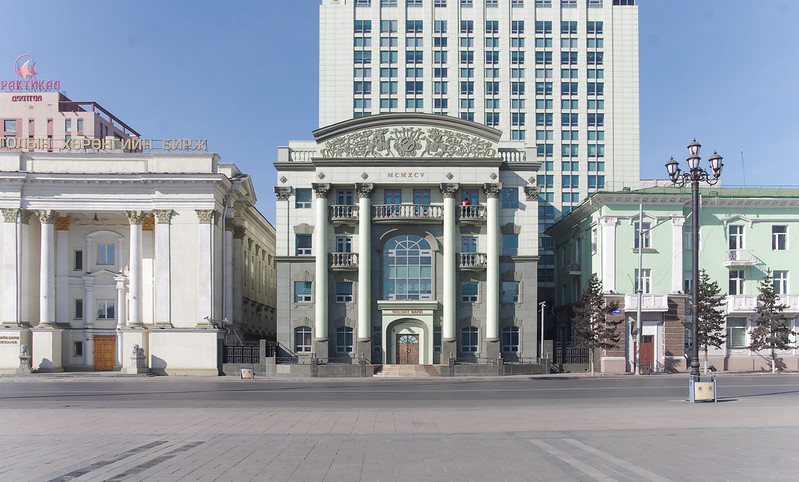 Located right at the heart of Ulaanbaatar, the Chinggis Square dates back from the late 19th century when the square was surrounded by a temple complex. This changed after the Mongolian revolution in 1921 and the temples surrounding the square were replaced with government buildings. The square was then named after revolutionary hero, Damdin Sukhbaatar. In 2013, the square’s name was changed to Chinggis Square in honor of Genghis Khan. 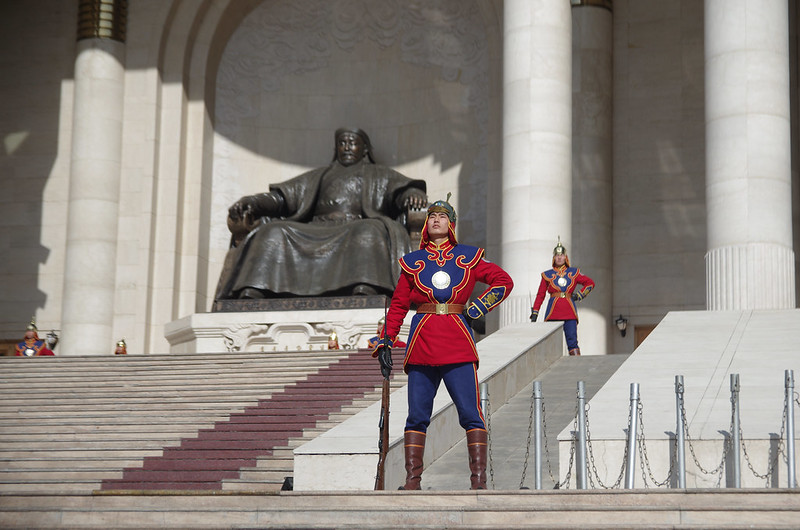 changing of the guard ceremony at chinggis square

Tip: Head over to the square at 11AM to witness the changing of the guards ceremony. You’ll find soldiers dressed in ancient Mongolian military gear as they walk towards the statue of Genghis Khan.

Winter Palace of the Bogd Khan 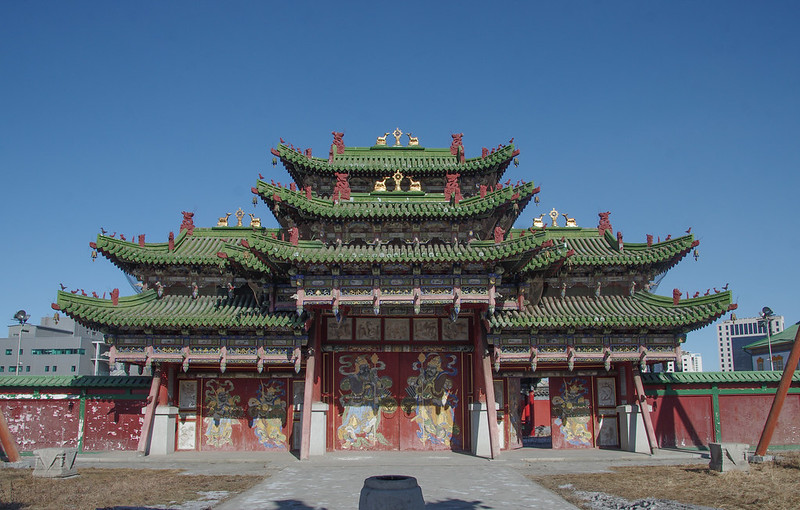 Probably the most architecturally astounding building in the city, the Bogd Khan Palace was built in the early 1900s in the Chinese style. It consists of several courtyards and has been turned into a museum. Inside, you’ll find several artifacts including religious objects, paintings, sculptures, metal objects and even clothes. Do note though that you’ll need to pay extra if you wish to take photos (the photography fee is around 10 times more expensive than the admission fee). 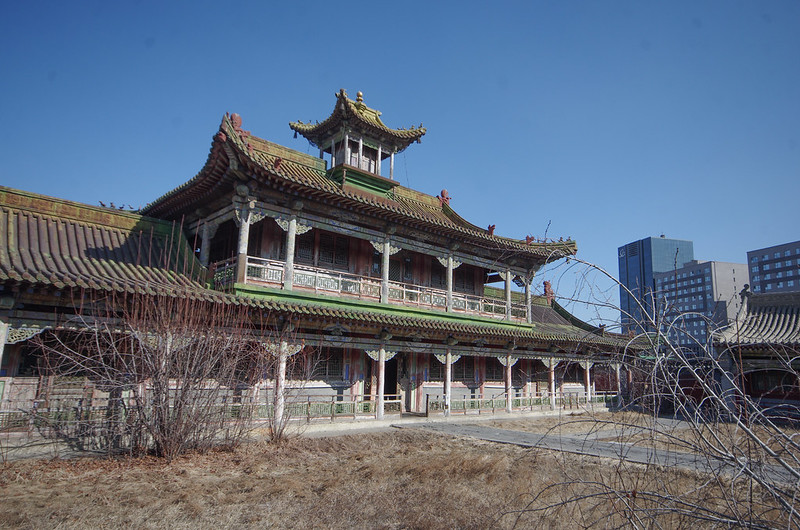 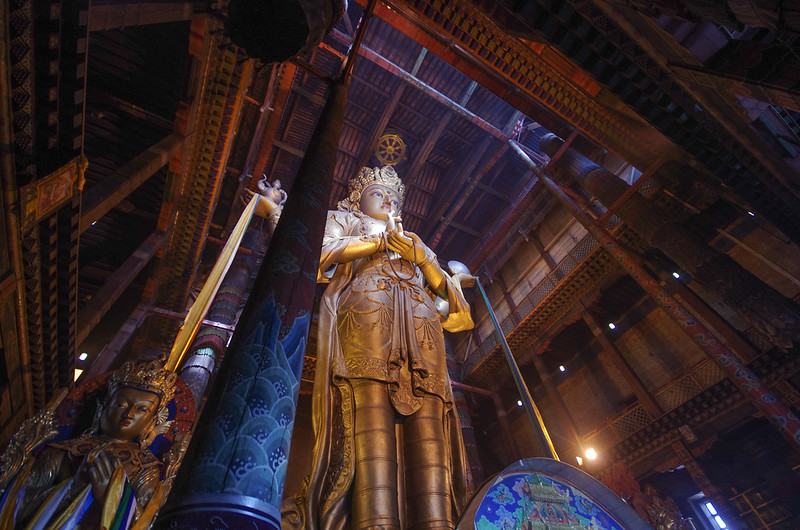 Located at the northwestern side of the city, near Holiday Inn Ulaanbaatar, is the main temple in the city. It’s quite busy no matter which day you visit with the busiest being Sunday. Gandan Monastery consists of a number of buildings with the main one being a white structure called Migjid Janraisig Sum. There is a photography fee to enter the hall where you see an imposing 26.5 meter statue of Avalokitesvara. 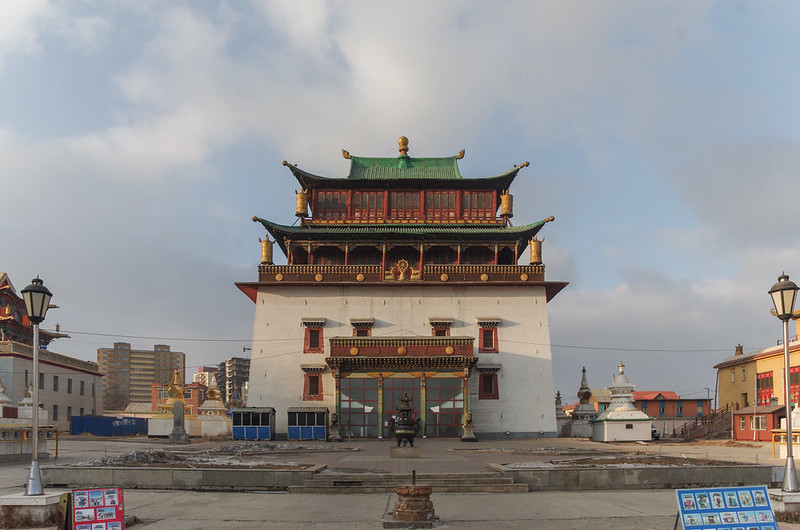 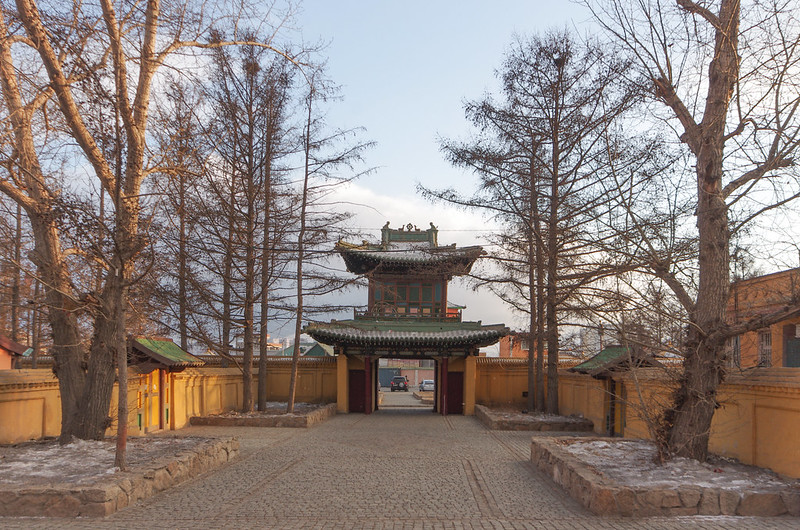 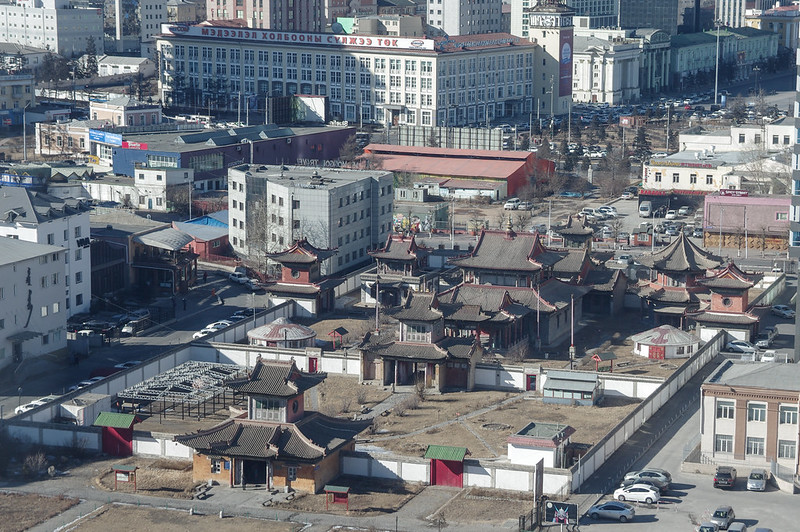 Another museum to check out when in Ulaanbaatar, the Chojin Lama Monastery which is located just across the Shangri-la Hotel Ulaanbaatar, was converted into a cultural monument in the 1940s. Inside you’ll find a number of religious artifacts including the embalmed mummy of the teacher of the Bogd Khan. Apart from this, the temple grounds is a also architectural pleasing that can be photographed sans the exorbitant photography fees being charged at the Bogd Khan Palace. 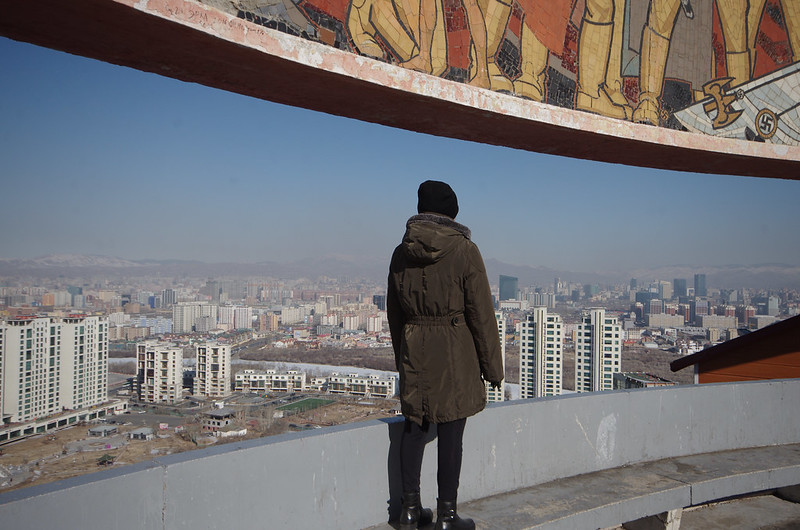 For a bird’s eye view of the growing skyline of UB, head up to Zaisan Memorial, a Soviet-style monument perched on a hill in the southern part of the city. Best time to visit is during the afternoons when the sun shines over the nearby buildings – an especially scenic sight during winter when the ground is covered in snow. 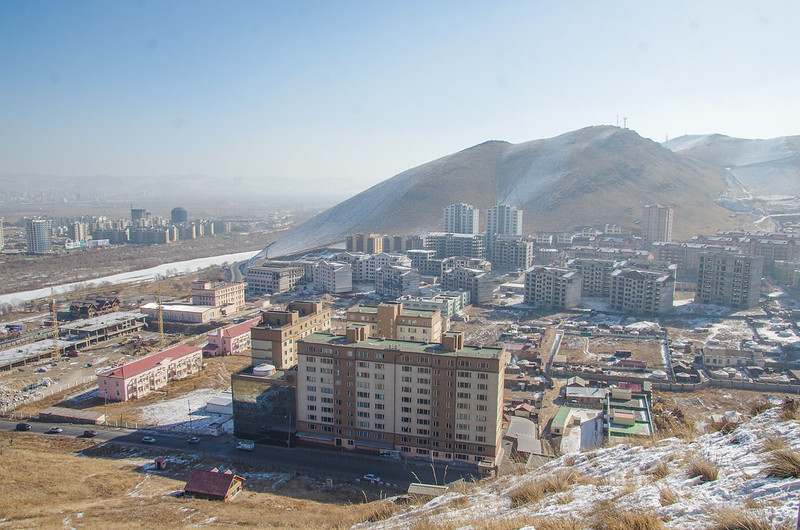 Tip: The memorial is a bit of a walk from the rest of the city so your best bet would be to take a cab and ask the driver to wait for you by the parking area. You will pass by the Bogd Khan Palace on your way there so it may make sense to combine the two places when sightseeing.

Other Museums in Ulaanbaatar 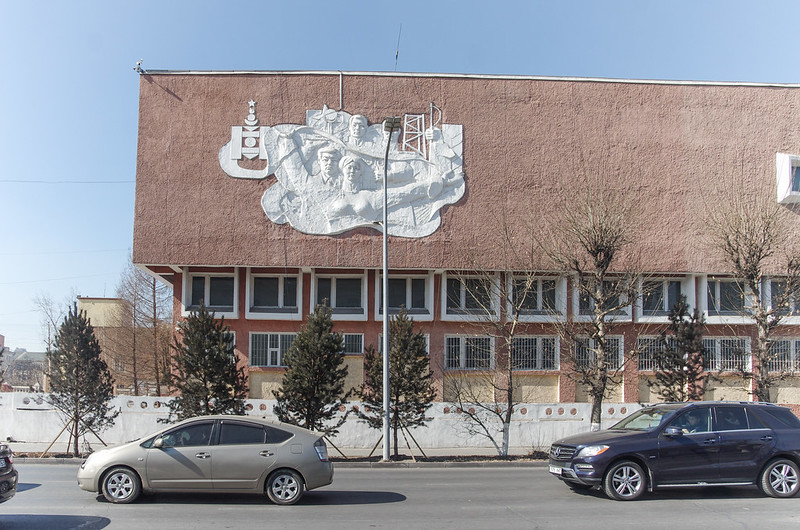 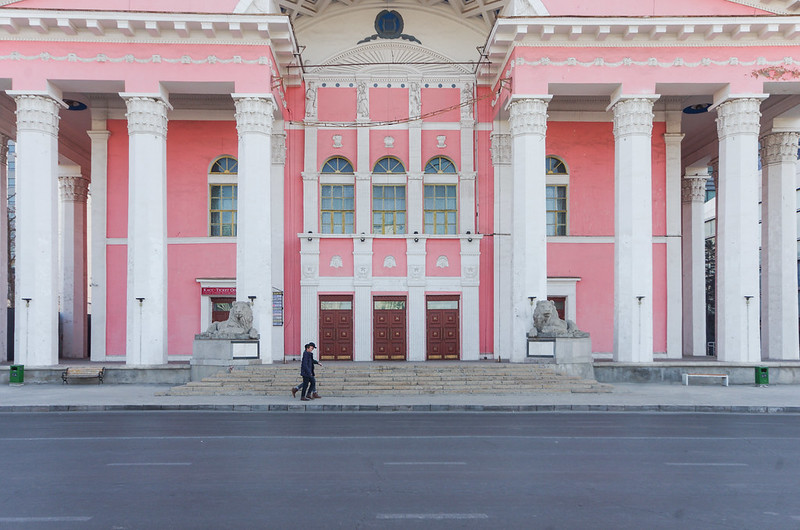 For a taste of Mongolia’s colorful cultural scene, watch one of the live shows at the theater located at Sukhbaatar Square. You can catch a number of performances including western ballet but one that’s highly recommended is the Mongolian opera. Sure, you may not understand anything but it provides for a good glimpse into local traditions (as well as a peek into the colorful local costumes!) 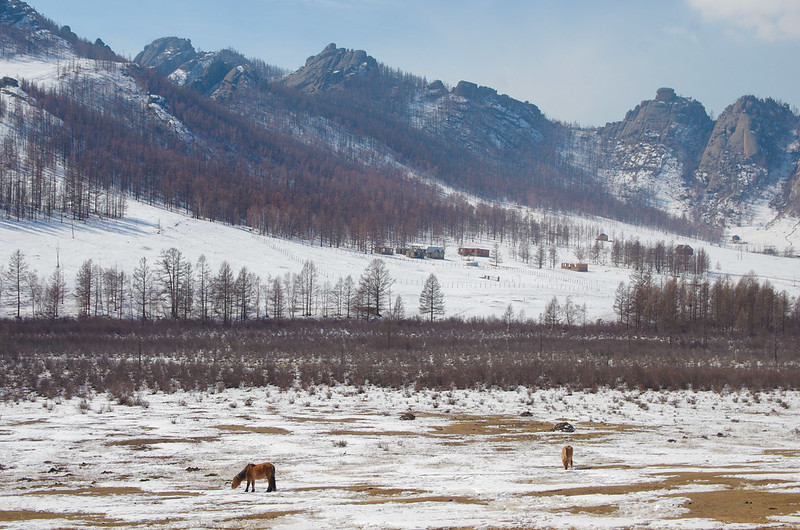 Around an hour’s drive from Ulaanbaatar, Gorkhi Terelj offers a taste of what Mongolia is known for – stunning landscapes – without having to travel for hours. Those who only have a couple of days in Mongolia can very well benefit from the proximity of the national park to the city. 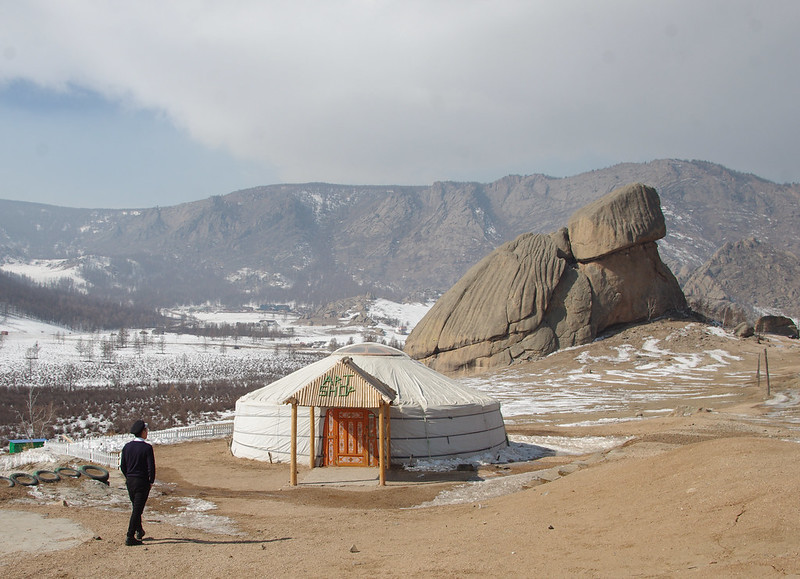 One of the most well-known spots within Gorkhi Terelj is the Turtle Rock, located close to a valley with a sweeping scenery. The place is more famous for its greenery but was picturesque nonetheless even during winter. 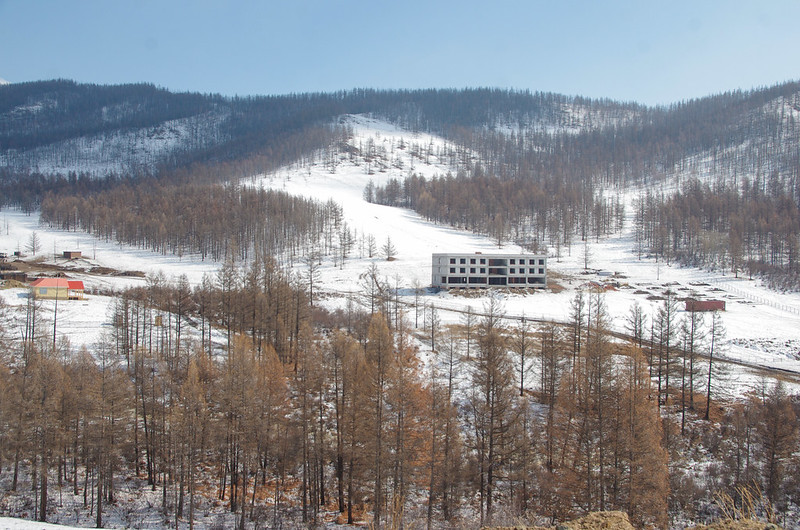 It’s also possible to stay overnight within the national park. There are yurt stay options as well as some reasonable cabins open for short stays. 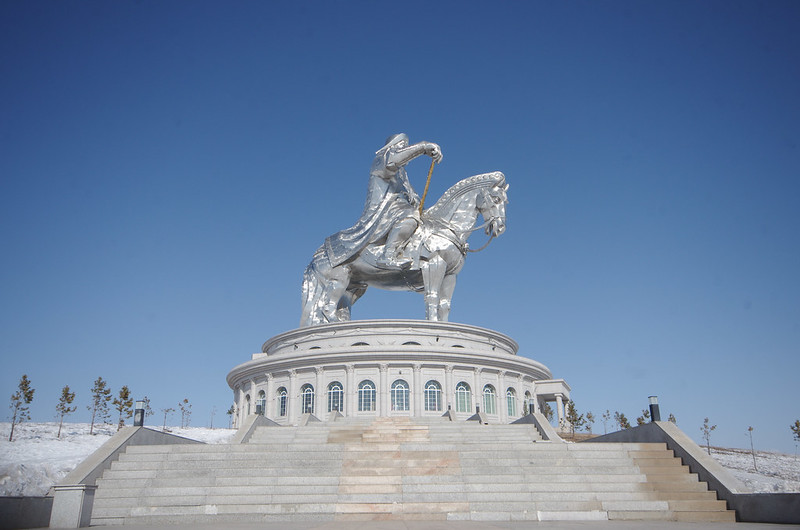 Not far from Gorkhi Terelj is the large 130 ft tall Genghis Khan statue complex which houses a museum and viewing deck. The attraction is fairly new (completed in 2008) and you can take the lift from the base up to the horse’s back for a nearer view of Genghis Khan’s image.

Opening Hours: Daily, 9AM to 5PM 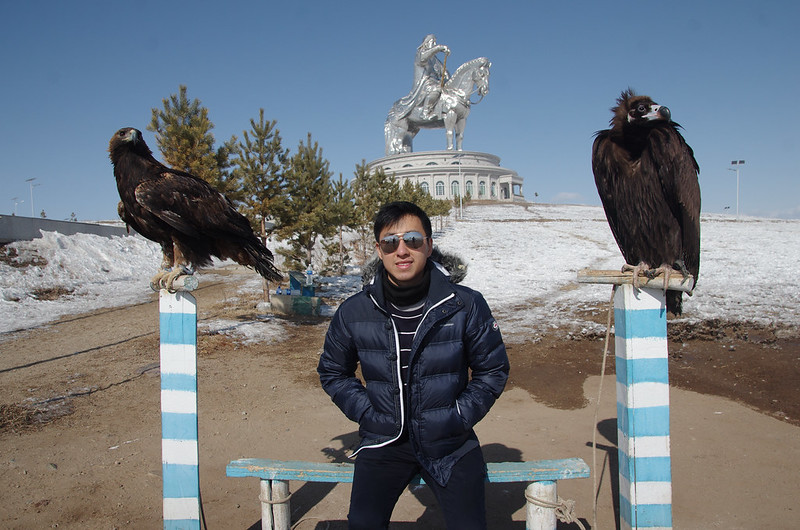 On the road to Terelj and the Genghis Khan statue, you’ll spot a number of caretakers with eagles by the roadside. You can take photos with these large birds for a fee and have them perch on your arms.

Tip: You can hire a car to take you to Terelj and the Genghis Khan statue for approximately US$70 to 100 depending how long you stay. I went with the VIP Taxi Service at Ulaanbaatar which charges 35,000 Tugrik per hour for trips farther afield. Drivers were very professional, spoke English and the cars were quite plush. Complimentary bottled water was included in the service. You can check out their page here for more information.

The best time to visit the city and Mongolia in general is during the summer months from June to early September. I did not have that luxury when I visited Mongolia in March during late winter. Temperatures hovered at -15 degrees celsius in early morning with highs of -5 celsius but it was still feasible to go out and about as it was sunny.

What I wore for winter in Mongolia: one layer of thermal (top and bottom), two layers of sweaters, one winter jacket, jeans, two layers of socks, neck warmers, earmuffs. While boots are recommended, I got by wearing sneakers as long as I had at least 2 layers of socks (the ground could get very cold).

Getting From Airport to City

Prior to arriving in Ulaanbaatar, I was warned about taxi drivers who rip off unsuspecting travelers heading to the city from the airport. While in the airport, you will get a lot of drivers waiting at the arrivals area asking if you need a taxi. However, there is a counter right by the baggage claim section where you can arrange a taxi for not more than 20,000 Tugrik if you are traveling to the city.