I had stumbled upon Nan, in Thailand’s far north upon the recommendation of a traveler I had met when I was in Chiang Mai. Supposedly steeped in tradition, with national parks such as Doi Phu Kha at its doorstep and opened up from isolation fairly recently, I was quite keen to explore a slice of this heavily touristed country that had not yet been trampled by mass tourism.

From Bangkok, my flight arrived in Nan on a crisp Saturday morning. For a town of less than 20,000 inhabitants, I was taken aback by the airport terminal which seemed too modern for a town supposedly steeped in traditional ways.

Traveling from the airport to town, I could sense how it seemed to lack a definite center. The areas surrounding the airport were no less lively than the area where most of the town’s major temples are situated, a trait that typically marks a town’s center when it comes to Thailand. I was there on a Saturday and I could not help but notice the relatively large number of local Thai tourists around town, though foreigners were conspicuously absent. 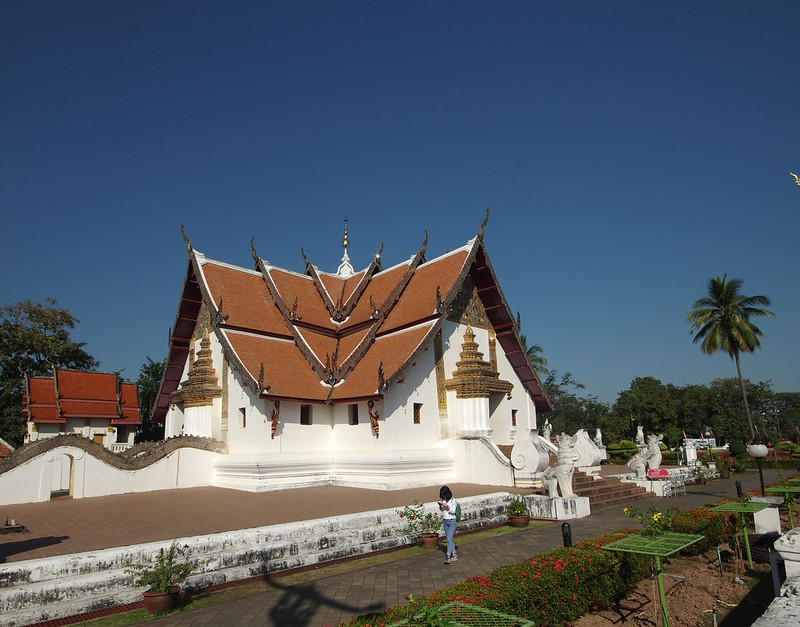 The first order of the day was Wat Phumin. Of all of Thailand’s temples, this has been described as a must-see with some even going as far as saying that it is Thailand’s equivalent to the Sistine Chapel due to the centuries-old frescoes inside the temple walls. 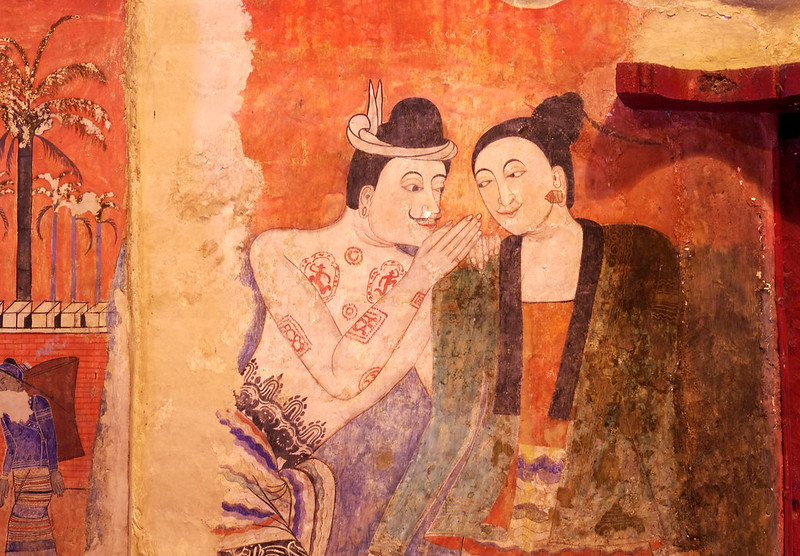 Indeed, the artistic details were quite stunning and depicted various slices of life back in the day. The most famous is the depiction of a man whispering to a smiling woman, a Thai Lue courtship scene from the 19th century. 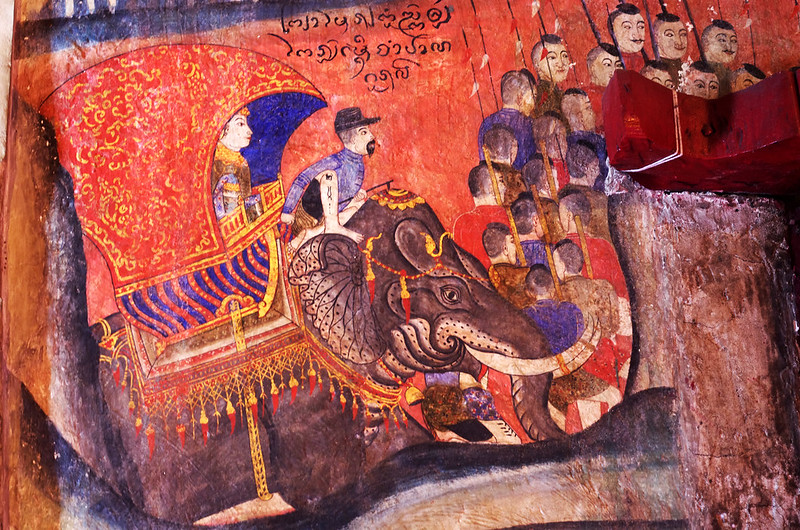 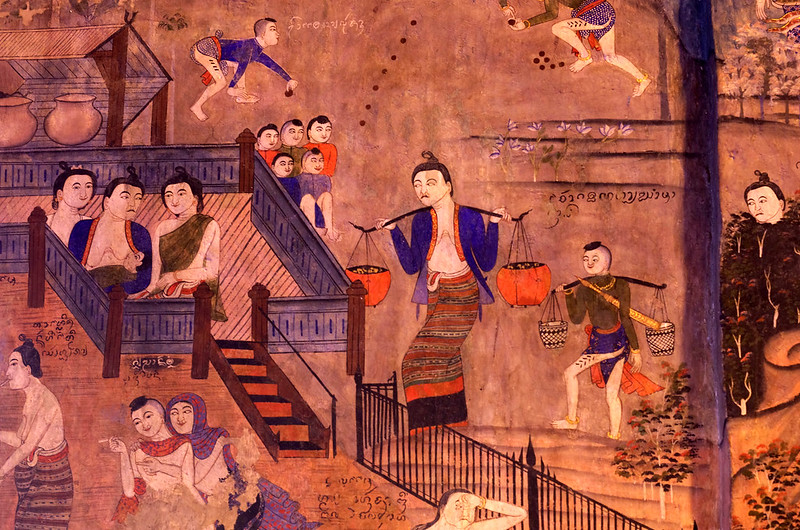 Apart from the murals, the temple itself is quite unique. The building is box-shaped instead of rectangular like all other Thai temples I had been to. 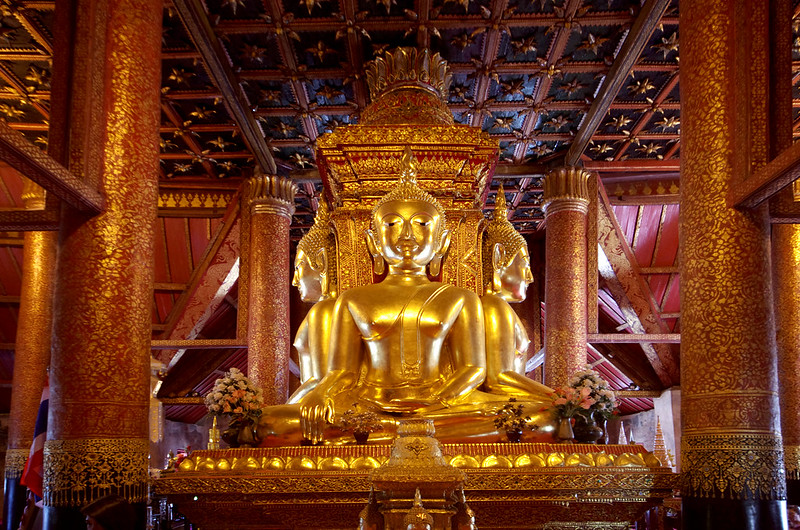 And instead of placing the main Buddha image at the far end, Wat Phumin has the Buddha images at the center and there’s not one but four of them! 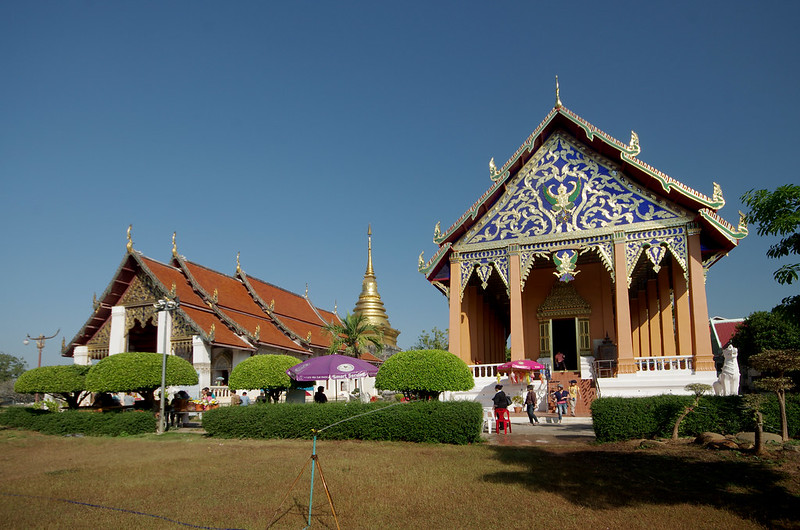 Just across this temple is Wat Phra That Chang Kham, said to be the second most important temple in Nan. Architecturally, it had the same Lanna-style architecture with roofs that curve downwards and a façade with intricate carvings. 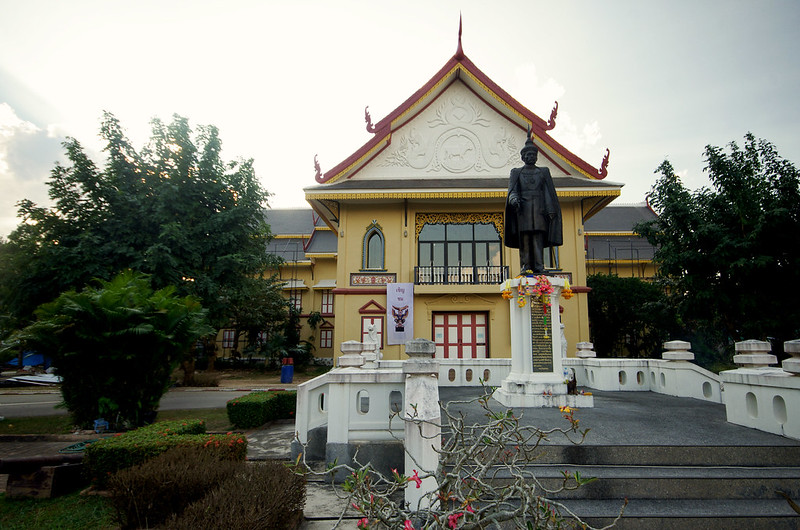 The Nan National Museum’s just next door from here but it was under restoration when I visited so I was only able to see it from the outside. Nevertheless, there’s a grove of trees within the museum grounds which seem to be very popular among Instagrammers due to its lack of foliage. 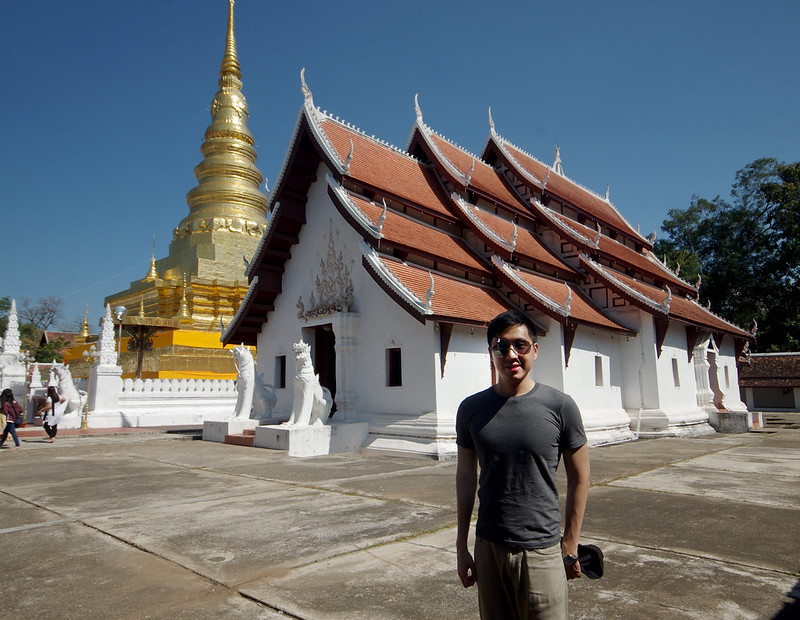 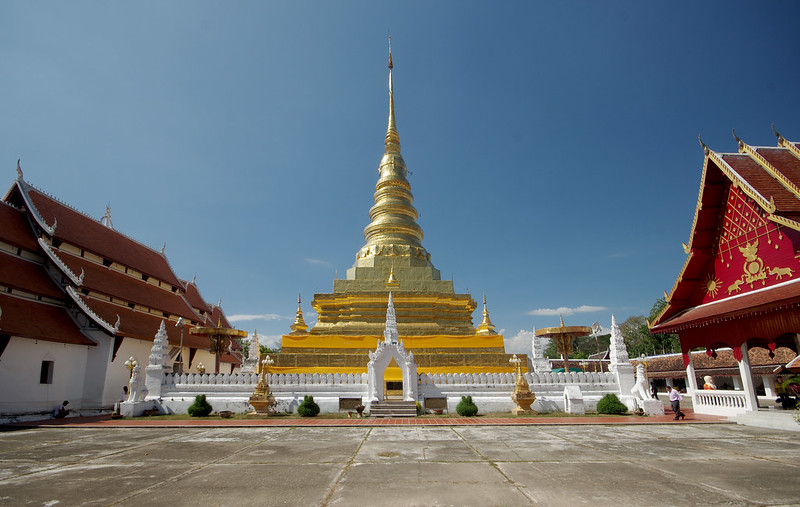 The most popular temple in Nan is Wat Phra That Chae Heng. It’s around 5 kilometers from town and since it was sunny without a single cloud that day, I opted to hire a songthaew for 200 Baht to take me there. The temple itself is set on a hill of modest height. The highlight here is undoubtedly the massive golden stupa, built in the Northern Thai style. 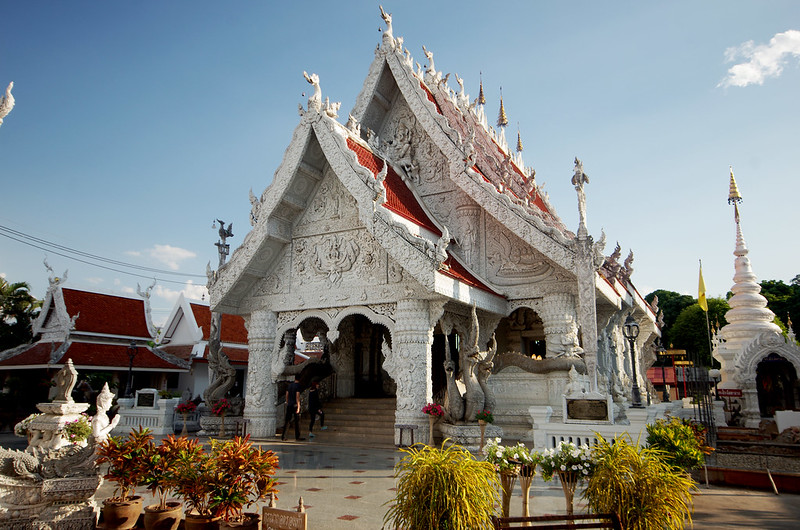 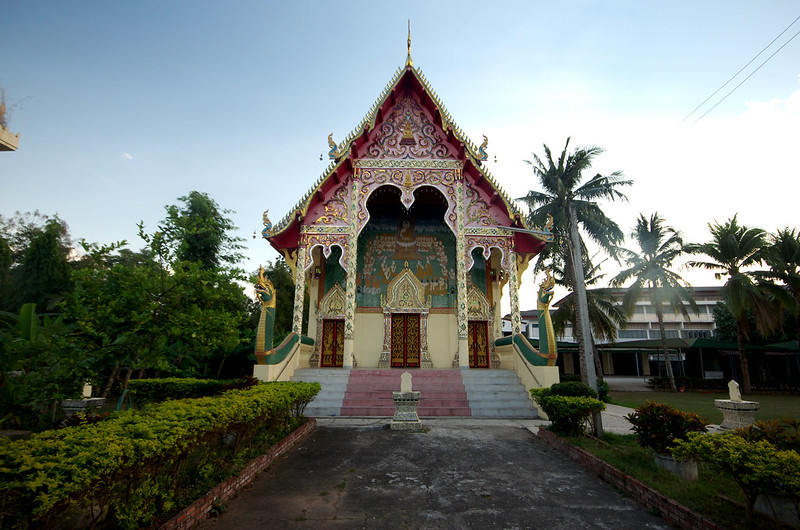 There were a couple more notable temples in Nan and I visited Wat Ming Muang, a temple made in white cement that reminded me of Wat Rong Khun in Chiang Rai, and Wat Phai Luang which I just stumbled upon as I was strolling through town.

I ended the day at Wat Phra That Khao Noi which I navigated via bike from the center of town. It was a mere 3 kilometer ride but the steepness of the last 500 meters – the temple’s actually on top of an 800 foot hill – took me a good 35 minutes! And from the parking area, it was still a 200-step climb to the top by foot. 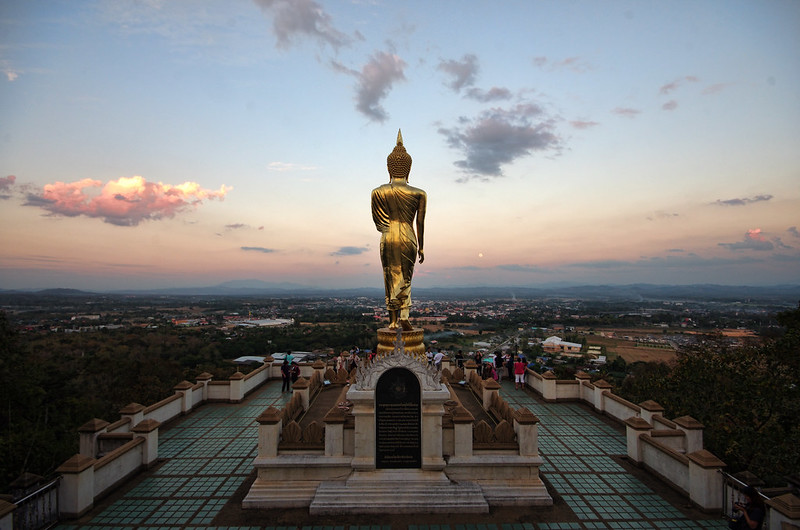 The temple above the hill isn’t spectacular per se but many make the climb for the views. Pictures of a large Buddha statue with sweeping views of Nan town often make it into tourist brochures and seeing the scene during sunset, I thought it was well deserved.

As I was in town during the weekend, I dropped by the Saturday Walking Street of Nan. It’s a more modest affair, along Phakong Road from the intersection with Suriyapong Road and continuing two blocks south. As Nan is a small town, the goods on sale were mostly food-related and were less unique than in Chiang Mai or Chiang Rai. Nevertheless, I did spot some exotic crispy beetles, worms and grasshoppers on sale.

I spent most of my time in Nan exploring the town as I was due to visit Phrae the next day. I did notice however that many local tourists ended up visiting the national parks such as Doi Phu Kha National Park for some cool mountain breeze and occasional cherry blossoms. If you do decide to go for some trekking, this is an excellent place to do so. Nan is also an excellent place to go river rafting with the Nan River meandering through town.

The Lanna-style Pukha Nanfa Hotel is a favorite among local Thai tourists with its restored wooden interiors. Alternatively, you can compare for the best prices for hotels in Nan HERE using the aggregator.