I arrived at the almost deserted Ubon Ratchathani International Airport on a steamy morning, spotting just two other foreigners on my flight. The “international” in the name is a bit misleading – there is no other route besides the ones to Bangkok and the terminal looks like any provincial airport terminal in the country with a generic boarding gate. Located at the eastern part of the Isaan region, this is the first place that gets to see the sunrise in Thailand. Its namesake province is the easternmost that one can get to where Thailand’s concerned and the local culture bears some resemblance to Laos which is just across the border.

In between my sojourns to Champasak in Laos, I spent a bit of time in Ubon Ratchathani. While coming here certainly doesn’t normally count among Thailand must-dos, I found it to be a pleasant enough town, with interesting temples to please even the most templed out traveler. Here are some of those I managed to visit during my short time there.

The Temples of Ubon Ratchathani 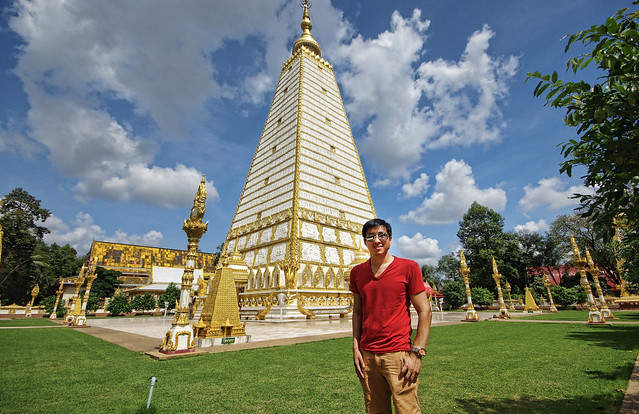 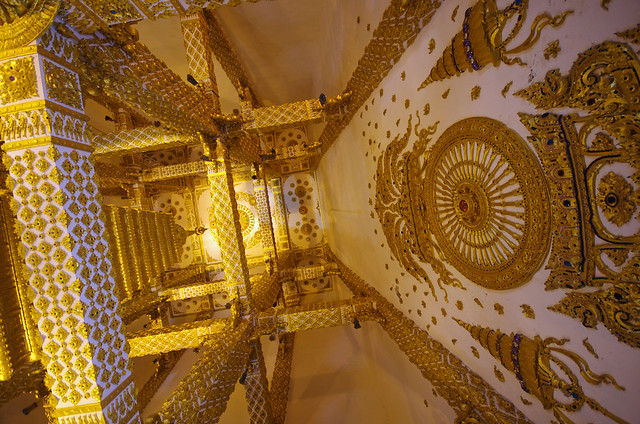 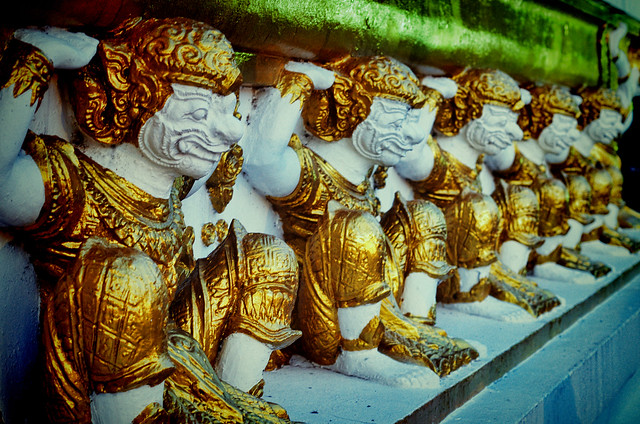 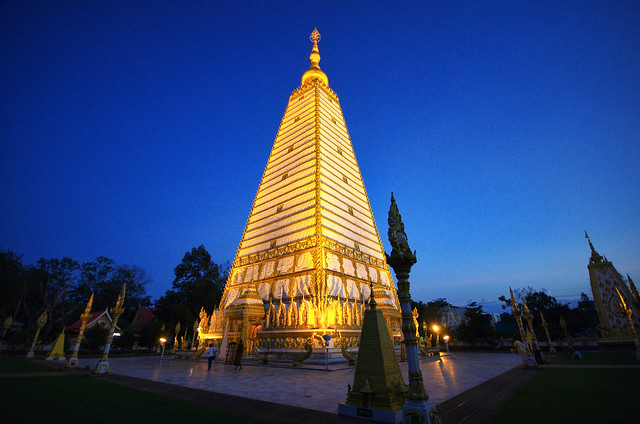 This temple is perhaps the most unique in the city. Featuring a look that was inspired by the Mahabodhi temple in Bodhgaya, the site in India where the Buddha achieved enlightenment, this city landmark is a pleasure to visit both during day and night. I visited this temple twice, once at sunset where I witnessed the temple grounds floodlit across all four corners. 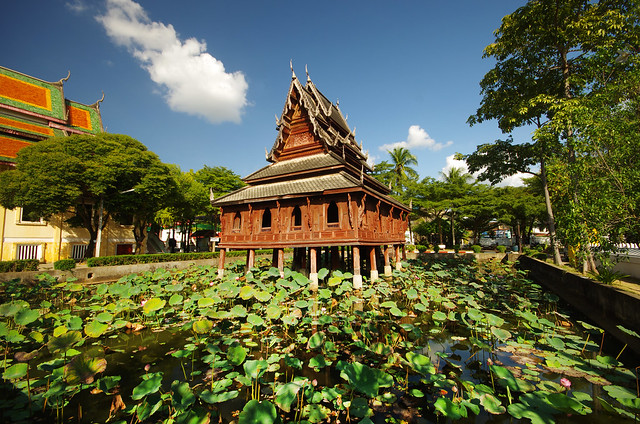 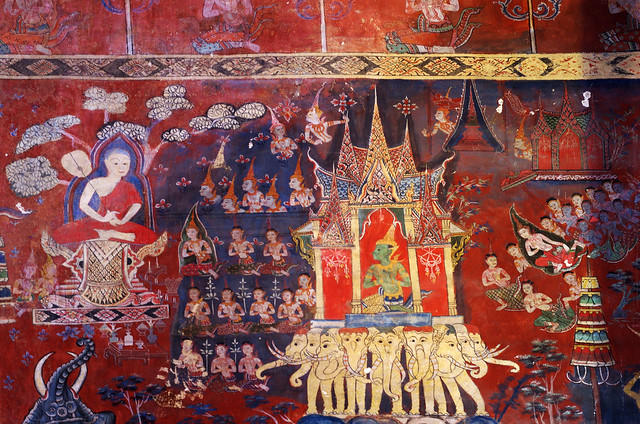 This temple is a spectacular sight, especially with its wooden Tripitaka library built on stilts and sitting on a lotus pond. Of the hundreds of Buddhist temples I’ve visited, I could say the construction of this temple is truly unique and unlike anywhere else in the world. 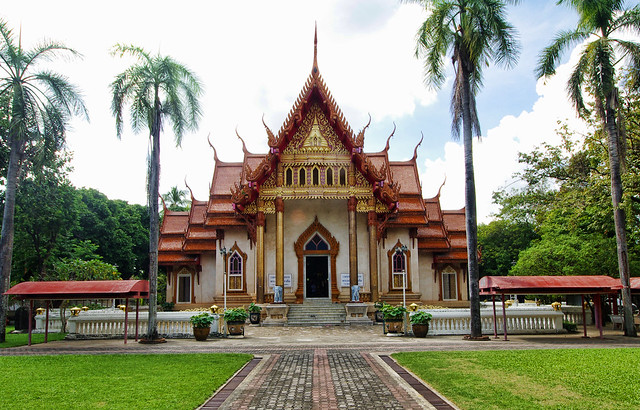 If you’ve been to the famous Wat Benchamabophit temple in Bangkok, you’ll notice the similarities in the exterior yet this temple is perhaps considered as one of the most sacred in Ubon Ratchathani. This is due to a 7 cm tall Buddha statue made of topaz that was brought here several centuries ago from Vientiane in what is now Laos. Nowadays, it’s an interesting place to visit even for non-Buddhist and offers a peek at Thai religious life. 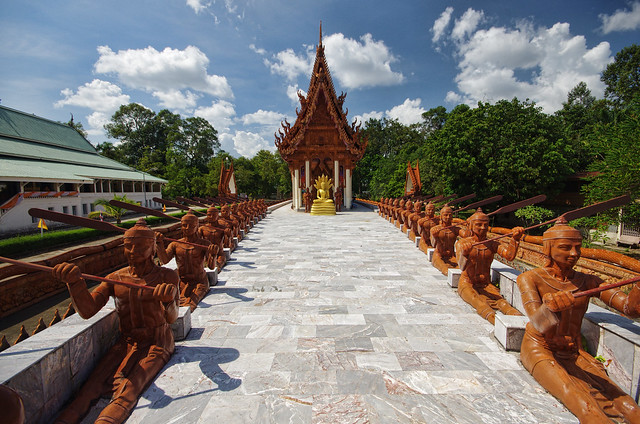 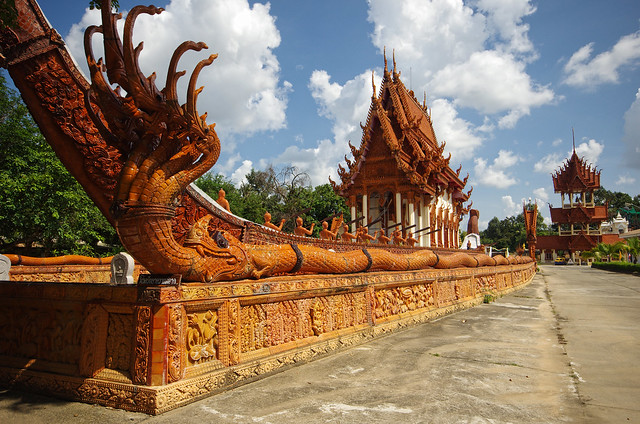 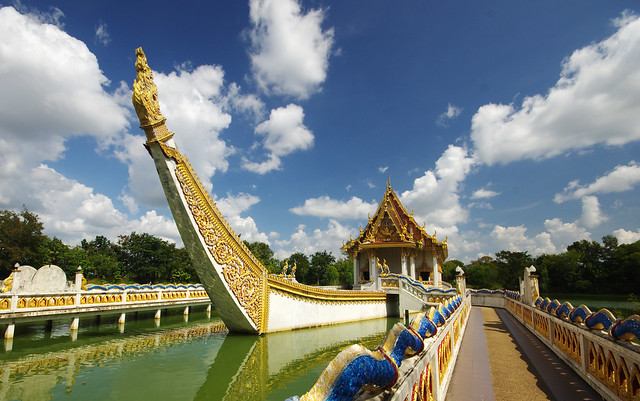 This temple’s a bit out of a way but is worth a trip for its boat-shaped construction. Also called Wat Sa Prasan Suk, this is a sprawling complex with two temples shaped into a royal barge. There’s not much to see inside the temples themselves though the setting is quite picturesque.