Before there was Moscow or St. Petersburg, there was Kiev. As the cradle of East Slavic civilization, Kiev today serves as the capital of Ukraine and is a pleasant city with plenty of parks, golden domes as well as some cool Soviet monuments. Because of the war in the east and the recent loss of Crimea, many people make the hasty generalization that Ukraine is not safe to visit.

They couldn’t be more wrong.

Arriving at Kiev’s Boryspil Airport for the first time, I also fell prey to this paranoia primarily due to what I read online. I was told to expect fake police who will ask for my passport, be subjected to racially-motivated attacks and never to use my credit card because my card’s security would certainly be compromised. In my five days in the country, I never encountered anything close. Kiev is safe as houses. The locals are also quite friendly and willing to help. I’m not saying that they’re the friendliest people on earth but my general experience of Ukrainians is that they’re a lot friendlier compared to people from their neighboring countries.

One thing I did notice was the lack of tourists in the city. This is a shame as Kiev has a lot to offer. But it has its advantages too. Nothing feels extremely touristy. Entrance fees to key attractions remain quite cheap and even fine-dining restaurant meals could be had for just $15 per person!

For those living in any of the major European cities or ex-Soviet capitals (except for the cities in Russia), Kiev is just a short flight away. As I live in Southeast Asia where the only connection is through Bangkok, I arrived in Kiev from Vilnius in Lithuania. I took Ukraine International Airlines and all my flights (I flew 4 sectors with them) departed on time and were fuss-free.

Things to Do in Kiev 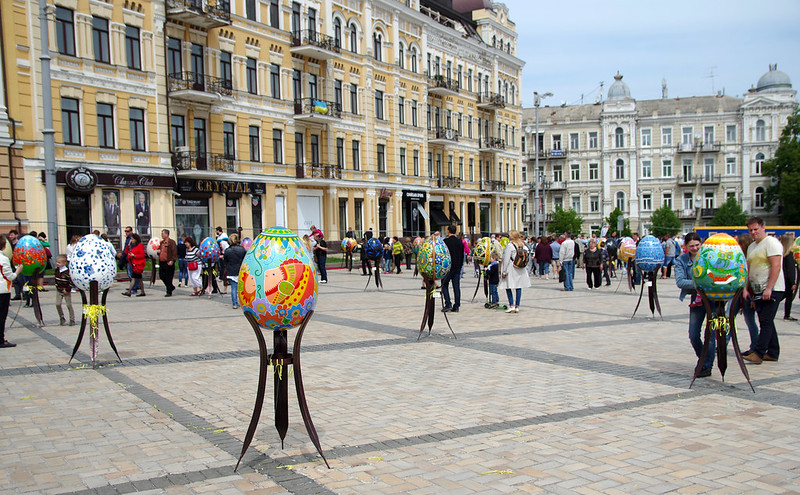 While Kiev is firmly in Europe, the city is a refreshing change from your typical European fairy tale town. Orthodox Christianity is a big thing here so some of the most prominent landmarks in Kiev’s skylines are bulbous golden domes of the city’s many churches. Kiev is also quite modern with plenty of big-name hotels, nightlife options as well as soaring skyscrapers. Monuments and buildings from the Soviet era remain and are part of the charm. 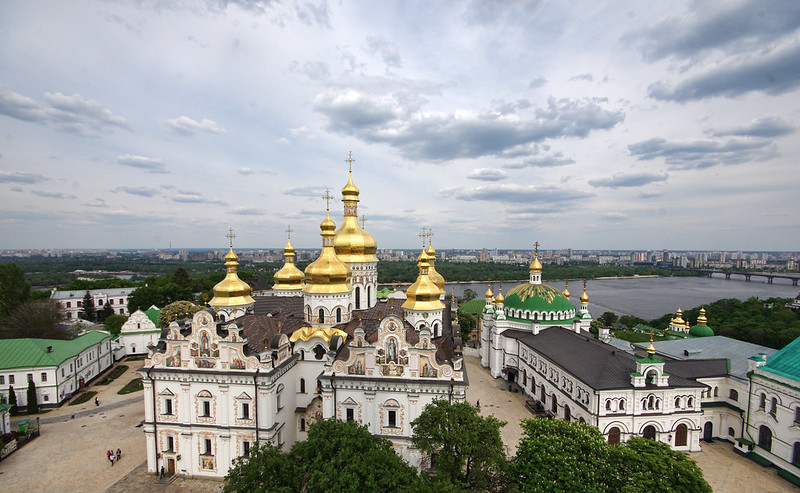 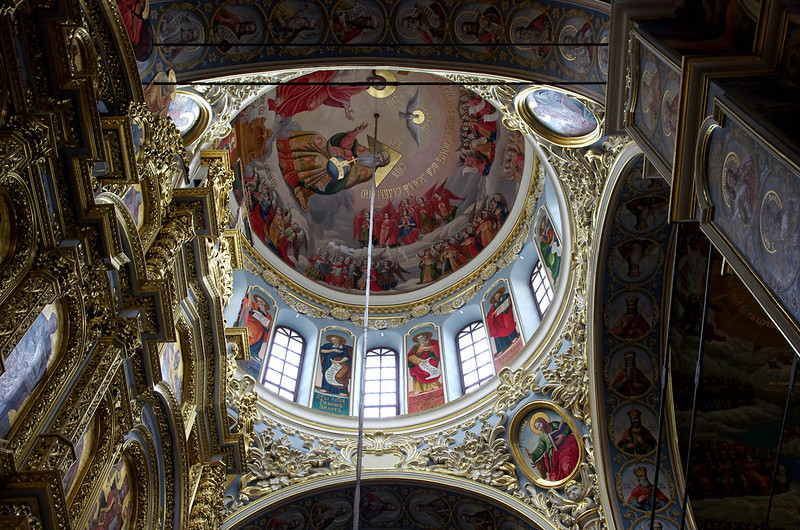 Founded in 1051, this sprawling monastery complex on a hill beside the Dnipro River is a major pilgrimage site for Eastern Orthodox Christians. With several churches, a stunning bell tower and an impressive hilly backdrop; the Pechersk Lavra is also a notable architectural monument. It’s been inscribed as a UNESCO World Heritage Site. The complex is divided into the Upper Lavra and Lower Lavra. Most tourists focus on the upper areas while those on pilgrimage or those wishing to visit the caves continue to the lower areas. The main places to visit within the complex is the bell tower where visitors can climb – at an additional fee – for some stunning views, the Dormition Cathedral with its amazing interiors as well as the Museum of Historical Treasures. 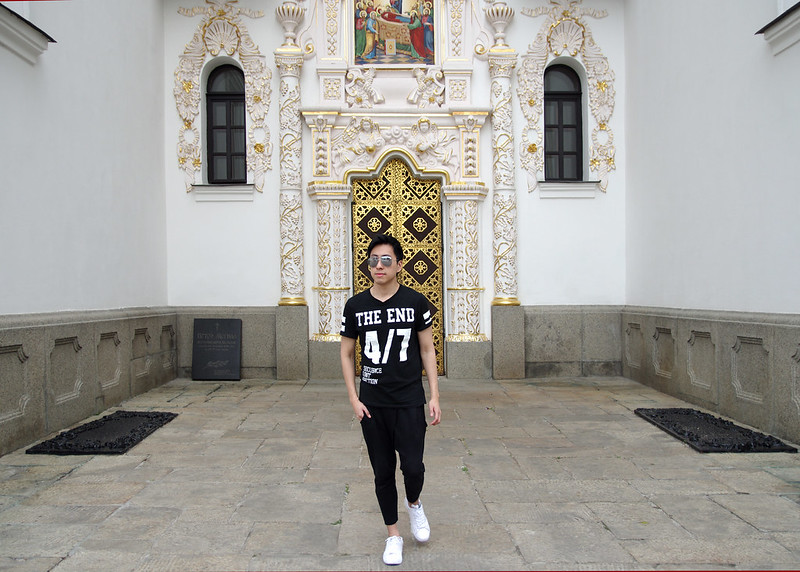 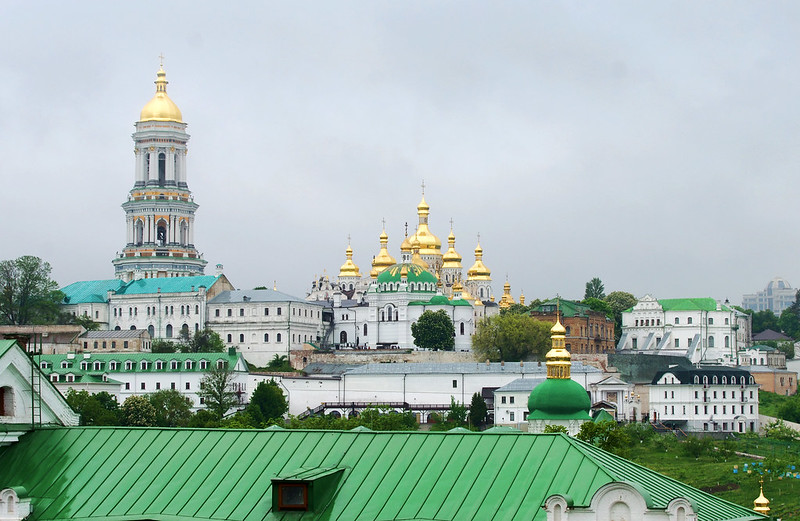 Depending on which gate you enter, you’ll have to either pay 50 UAH or nothing at all. There is a guard posted to the main entrance, which is closest to the bell tower and the Dormition Cathedral, and he or she inspects for tickets. However, the other entrance further down that leads to the Lower Lavras don’t require admission. 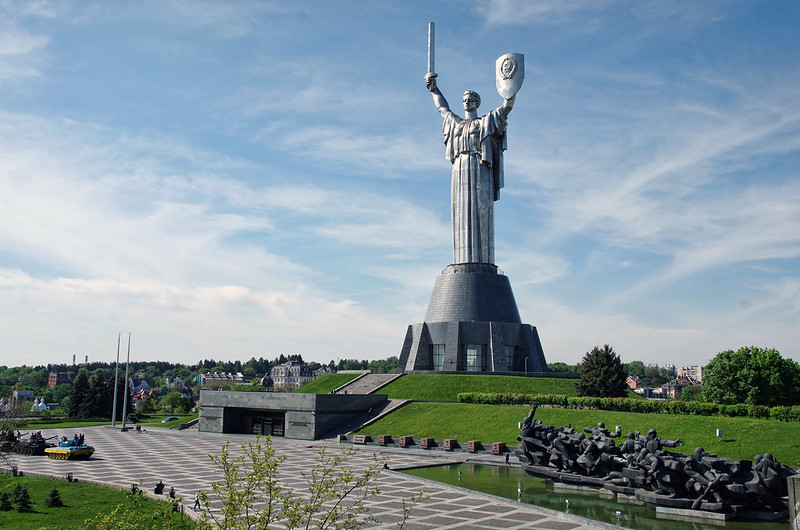 If you arrive in Kiev via Boryspil Airport, you would have noticed a tall statue rising up from the green hills by the river side. This is the Rodina Mat or the Motherland Statue. It is 62 meters tall, made of titanium and is one of the most recognizable monuments in the city. The statue itself dates back from Soviet times and you would find similar ones in other ex-Soviet capitals. What makes this one more special is its scenic setting on a hill near the river. 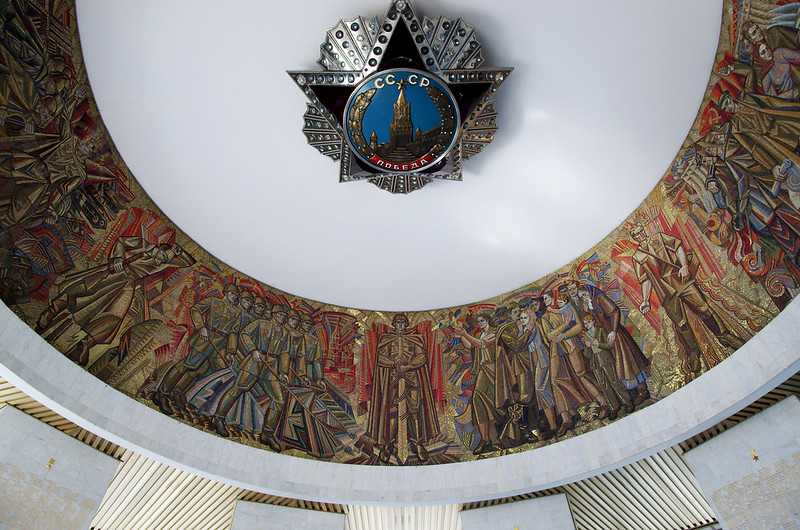 The statue itself is part of a wider complex which is the Museum of the Great Patriotic War. I’m not into museums generally but found this quite gripping with its many artifacts dating back from the German invasion of the Soviet Union. The interiors also scream Soviet design and that’s another reason to visit. 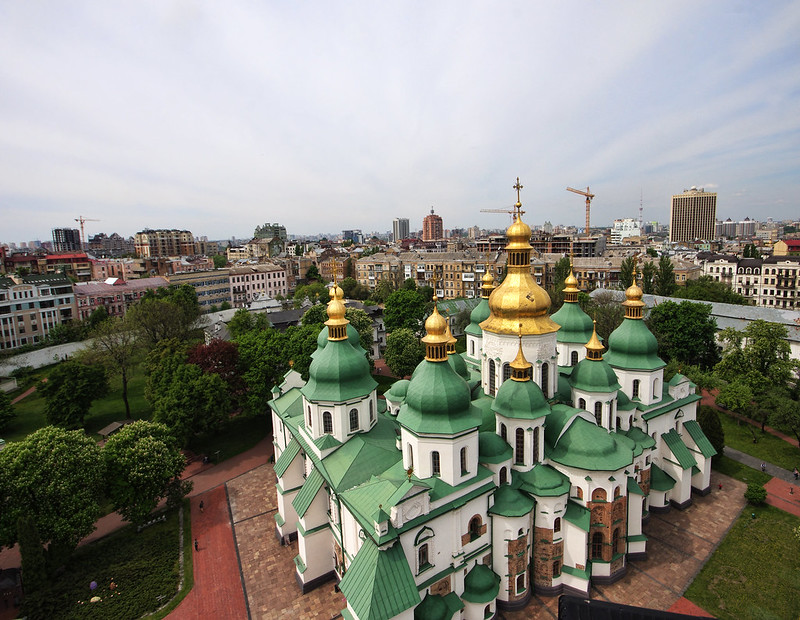 Another UNESCO World Heritage Site, this is another place you shouldn’t miss in Kiev. While the exterior’s white finish doesn’t look overly impressive, it’s a different story inside with one of the world’s biggest displays of mosaics and frescoes from the 11th century. I would say that it’s probably one of the nicest church interiors I’ve ever seen. It’s just a shame that photos aren’t allowed inside! When you visit this cathedral, make sure to go up the bell tower as well for some amazing views of the city center as well as the St. Michael’s Golden Domed Monastery at the other end of the street. 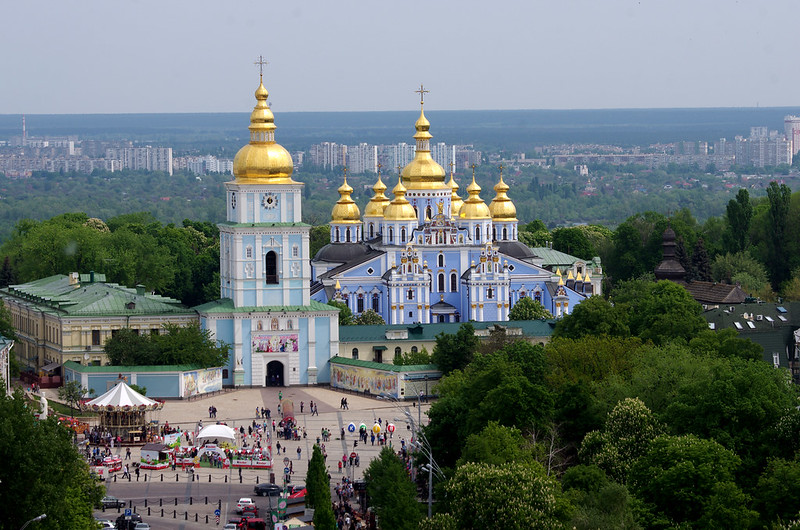 A short walk from the St. Sophia’s Cathedral is the St. Michael’s Golden Domed Monastery which is known for its baby blue hue. While this church has a storied past, it was destroyed during the Soviet era and was rebuilt only some 16 years ago. This gives this church a fresh look. Compared to St. Sophia’s which has been turned into a museum, the St. Michael’s is still a functioning church to this day and during my visit, I chanced upon a lot of people inside. 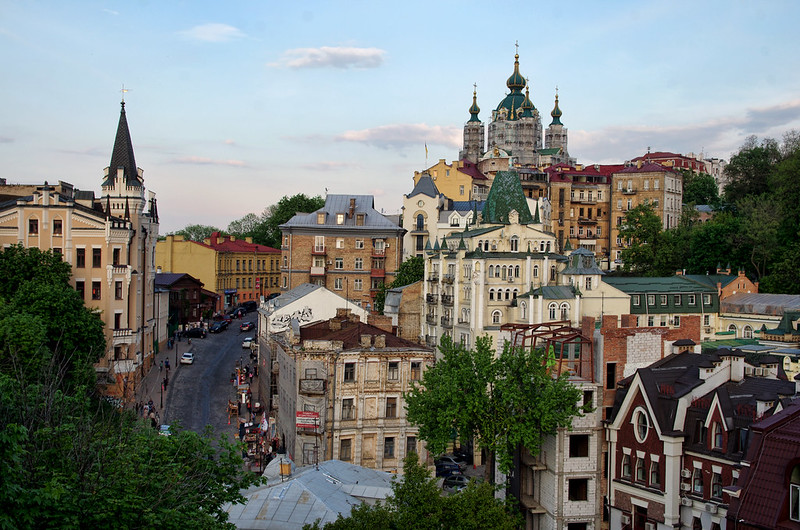 No other place in Kiev will give you that “European” feeling as much as a stroll down Andrew’s Descent. Filled with souvenir shops, cafes, galleries and boutiques; this is perhaps the most touristy area in Kiev. But that being said, the tourists you get to see here are only a fraction of what you’ll have to jostle with elsewhere in Europe. 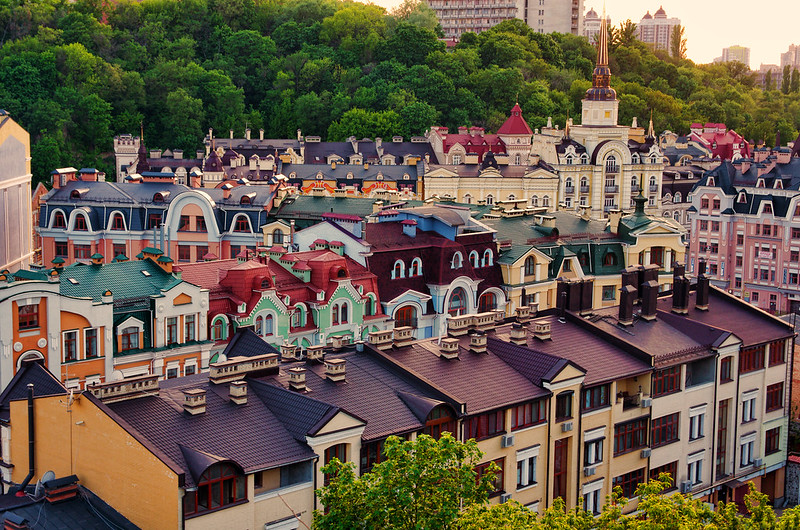 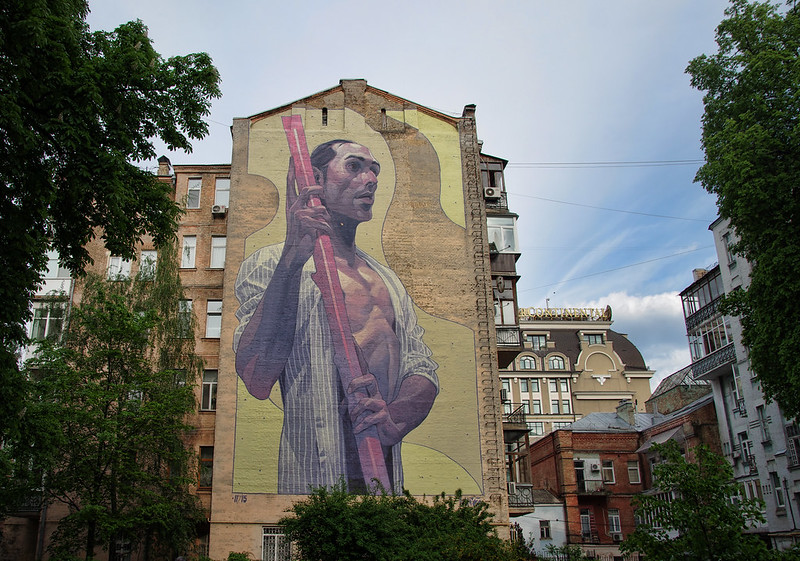 The best way to see Andrew’s Descent is to start at the St. Andrew’s Church and walk your way down from there. On the way, you’ll see the Castle of Richard the Lionheart and plenty of small shops. If you are there during dinner time, make sure to check out Kanapa. They serve excellent Ukrainian cuisine! There are also plenty of “hidden” viewing decks to see the area surrounding Andrew’s Descent and these can be identified through a series of steps from the ground level. 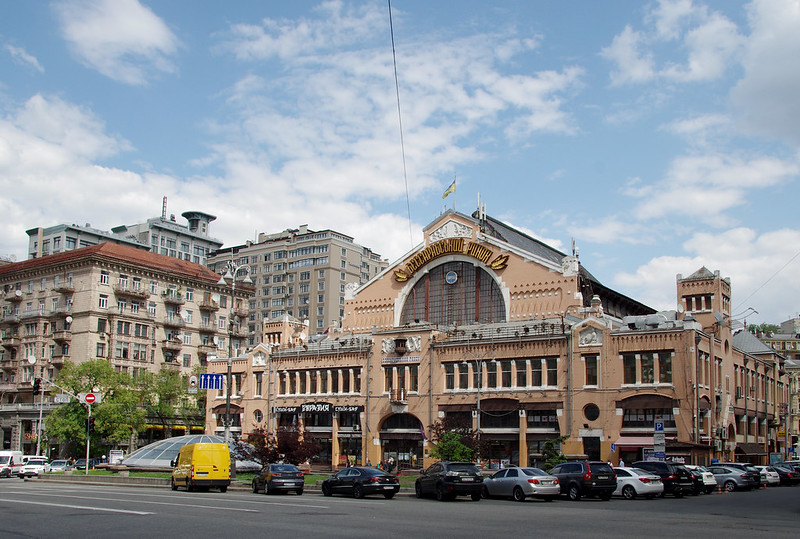 For a city with millions of people, Kiev still has that thoroughfare which it identifies as its main street. For the Ukrainian capital, that street is Khreschatyk. It’s a popular hangout among locals with its wide pedestrian lanes, rows of humongous government buildings as well as shops. During weekends, parts of the street are closed to traffic. 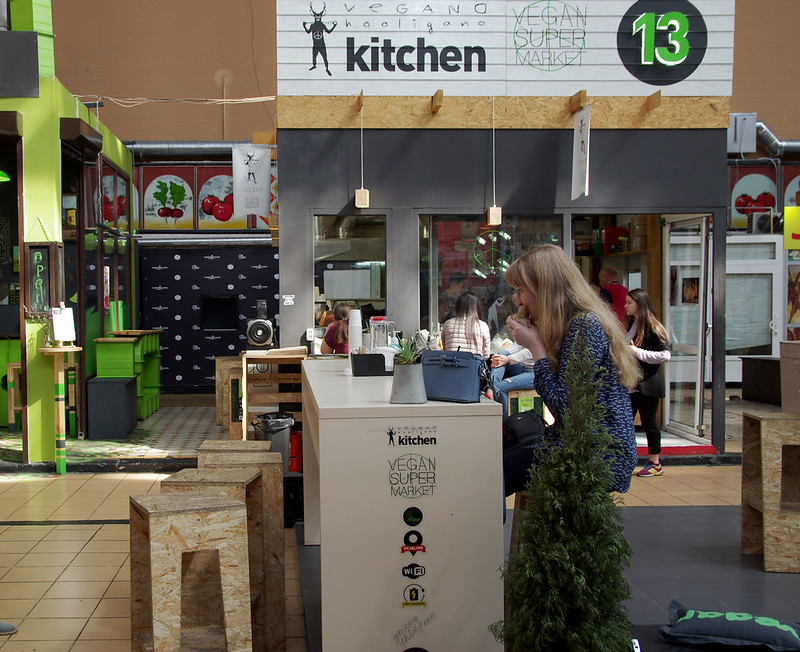 The best way to see Khreschatyk is to start at Bessarabsky Market which aside from being a functioning wet and dry market, also has a couple of hipster food options. I had some excellent tacos there. There is also a vegetarian cafe there in case you’re looking for one!

Near the other end of Khreschatyk is Maidan or Independence Square. If you recall watching scenes of protest in Kiev back in 2014, these were held here. In normal times, it acts like any city square in Europe. It’s filled with cafes and people walking around especially during weekends. 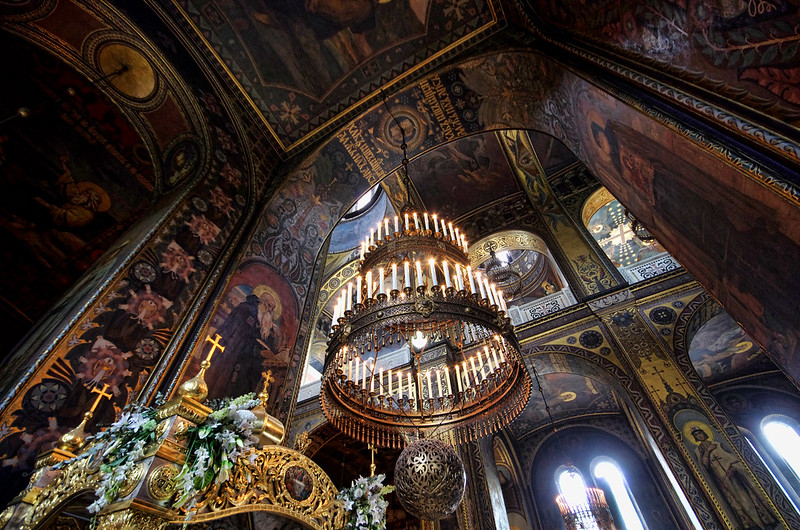 Constructed in Neo-Byzantine style in the 1800s, the St. Volodymyr’s Cathedral features eye-catching interiors. It was built in the 1800’s and took more than 30 years to finish! If you look inside, you’ll see exactly why. The paintings on the walls and on the dome are works of some of the finest Russian painters at the time. 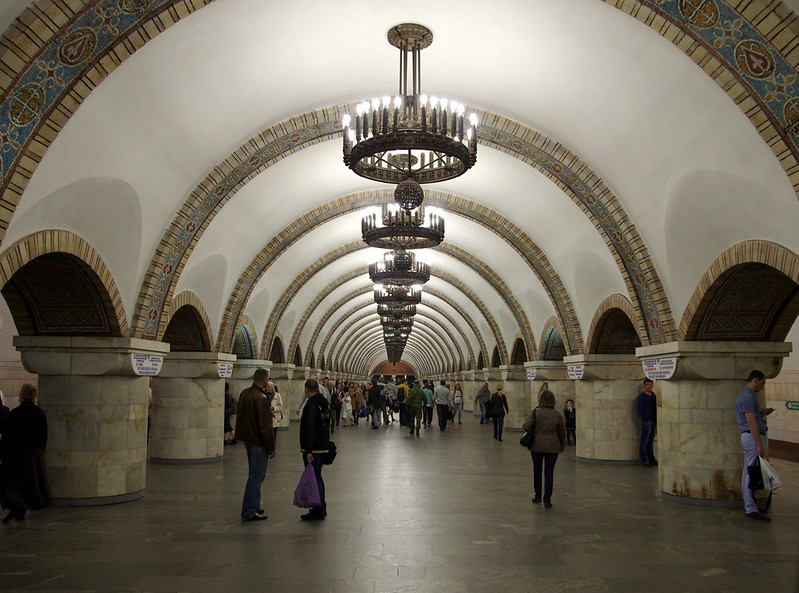 A byproduct of the Soviet era, Kiev, like Moscow or St. Petersburg, has some pretty interesting metro stations. The Zoloti Vorota station for instance, is frequently cited as one of the most beautiful metro stations in the world. Metro tickets are dirt cheap at UAH 4.00 (around $0.16) so it’s worthwhile to take a train ride somewhere to check out this station.

Hipster Shopping and Dining in Kiev

Given the public fatigue over the war in the east and Russian annexation of Crimea, Kiev has in recent years become a city filled with hipsters. Many of the locals are dealing with the economy through third wave coffee, craft beer and beards. Quite a few ex-communist cities have gentrified since the collapse of the Soviet Union and while Kiev isn’t as hipster as East Berlin (at least not yet), the Ukrainian capital is definitely up there among the most hipster capitals in Europe. 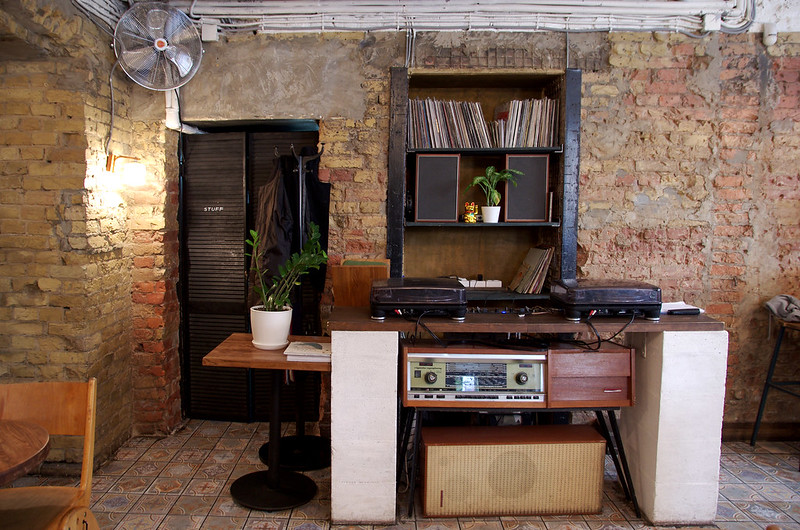 First of all, Kiev has plenty of pop-up flea markets. Unfortunately, I was there during a long holiday (it was Orthodox Easter followed by Labor Day) and I did not manage to catch one. There are also plenty of coffee joints and restaurants with names that don’t make sense (a trademark of hipster establishments). During my time there, I tried two of such establishments. Both were excellent. 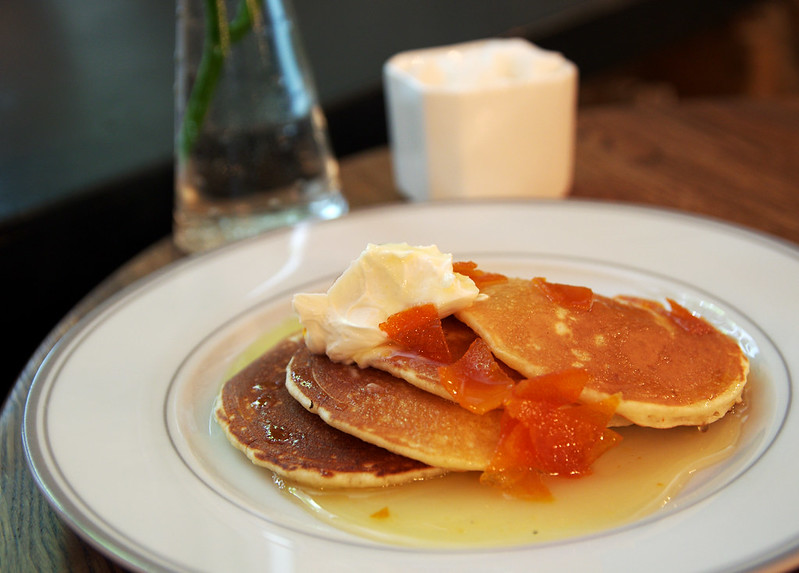 Located in Velika Zhytomirska which is a short walk from the St. Michael’s Golden Domed Monastery, Kosatka is a brunch place by day and a bar by night. It’s a favorite place among the creative types in Kiev. I went in the day for a spot of pancakes with orange marmalade which were fantastic. Expect to pay about $5 to 6 per person for a meal 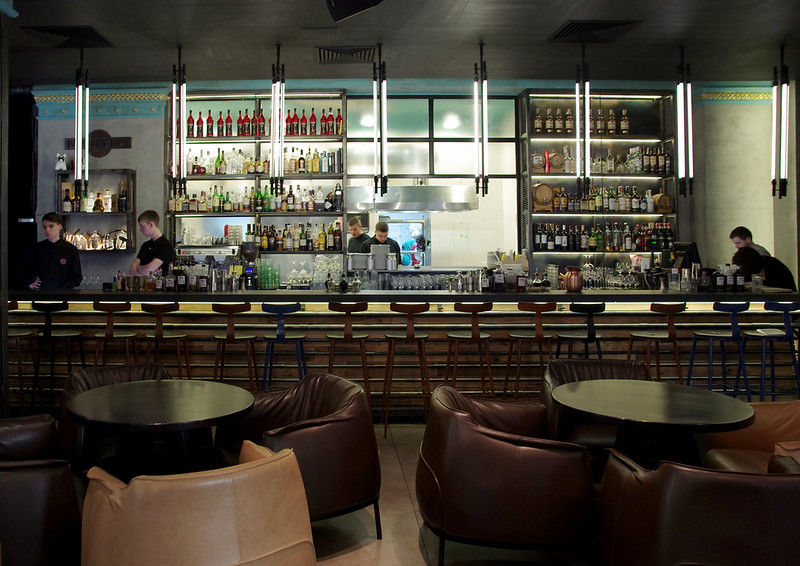 Another place I heavily recommend is Dogs and Tails which is located in a former cinema in Shota Rustaveli. This restaurant is around double the price of Kosatka. But still considered decently priced if you compare it with restaurants elsewhere in Europe. Their specialties are supposed to be hotdogs and cocktails (hence the name). I tried neither and ordered some salad and roast chicken. I don’t know how they did it (could be the paprika) but they managed to transform a common dish into something very tasty. If you come here, try the Roast Chicken! 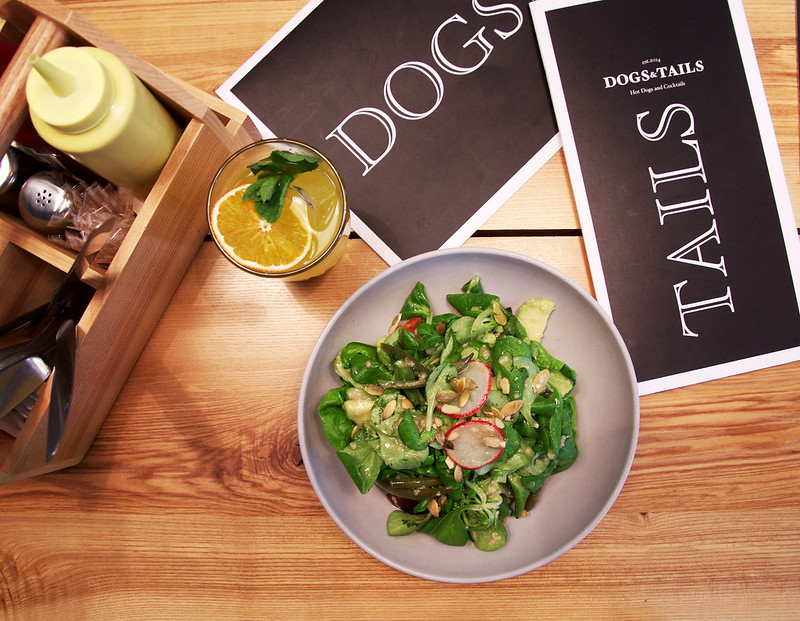 I was in Kiev for only three days and thus, I couldn’t try the many interesting food concepts around town. There are actually a lot more and this local guide gives a great overview. I certainly would love to go back! If you are visiting Ukraine, you might also want to check out this guidebook written by a local for hassle-free travel. Check it out here.

Where to Stay in Kiev

For some reason, luxury hotels in Kiev are pricing close to Western European prices. For this reason, I would suggest staying in 3 or 4 star hotels instead. I personally stayed in Ibis Kiev City Center which is located in the main drag. It is a short walk to the metro station as well as to the bus stops. Reception staff were quite helpful in suggesting places to visit and booking restaurants – something I’d typically expect in more upmarket hotels.

Have you been to Kiev before? What did you like about the city?